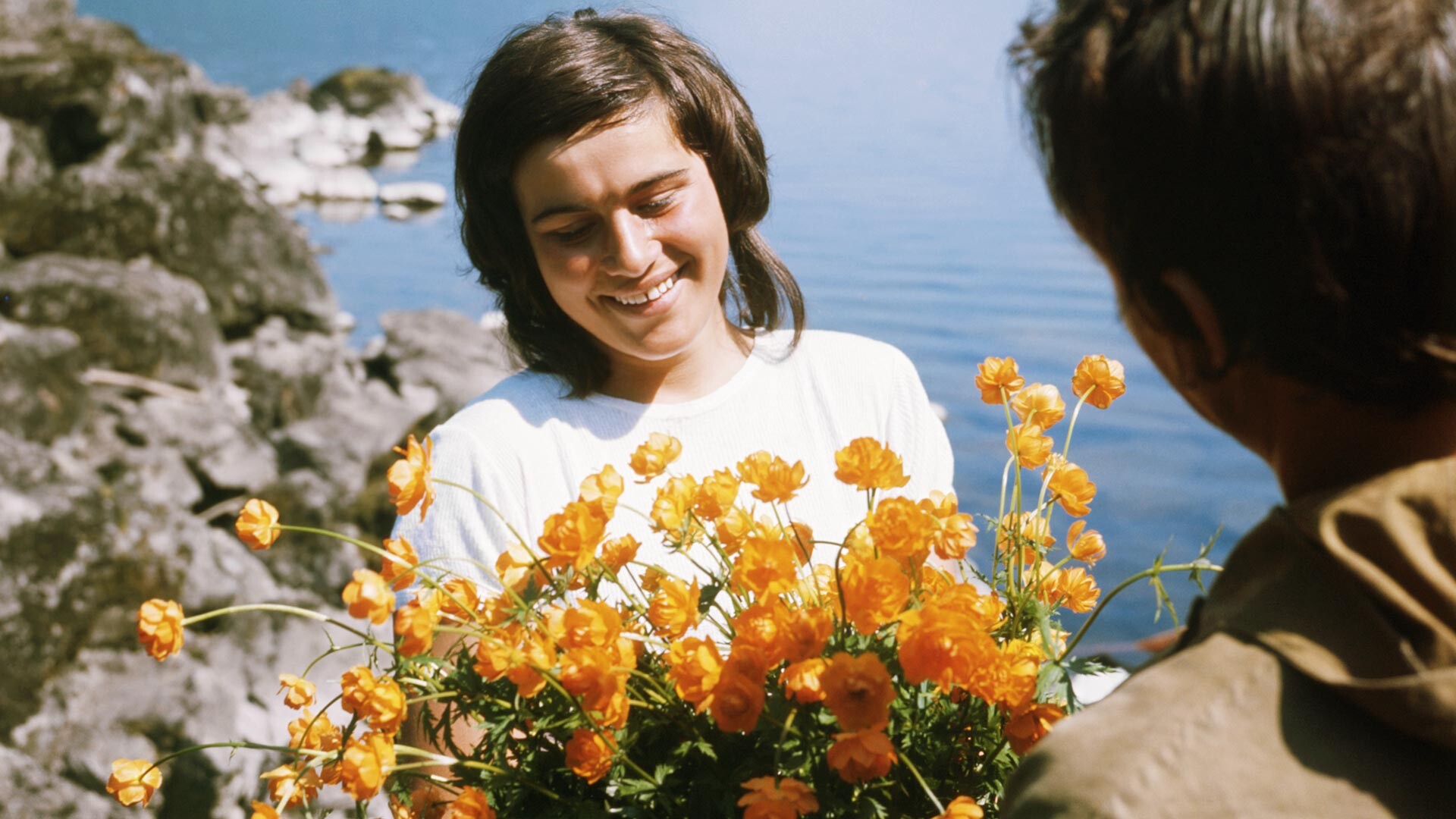 Viktor Sadchikov/TASS
At first, this holiday began with demonstrations for women’s equal rights. These days, this date is all about mimosa flowers and cute postcards.

Officially, March 8 became a public holiday in the Soviet Union in 1966, although it was celebrated earlier. In 1910, at the International Conference of Socialist Women in Copenhagen, Clara Zetkin from Germany made a proposal to mark the International Women’s Day on March 8. Her appeal was picked up in Russia and then across the USSR. The first rallies were held in St. Petersburg in 1913 and 1914. 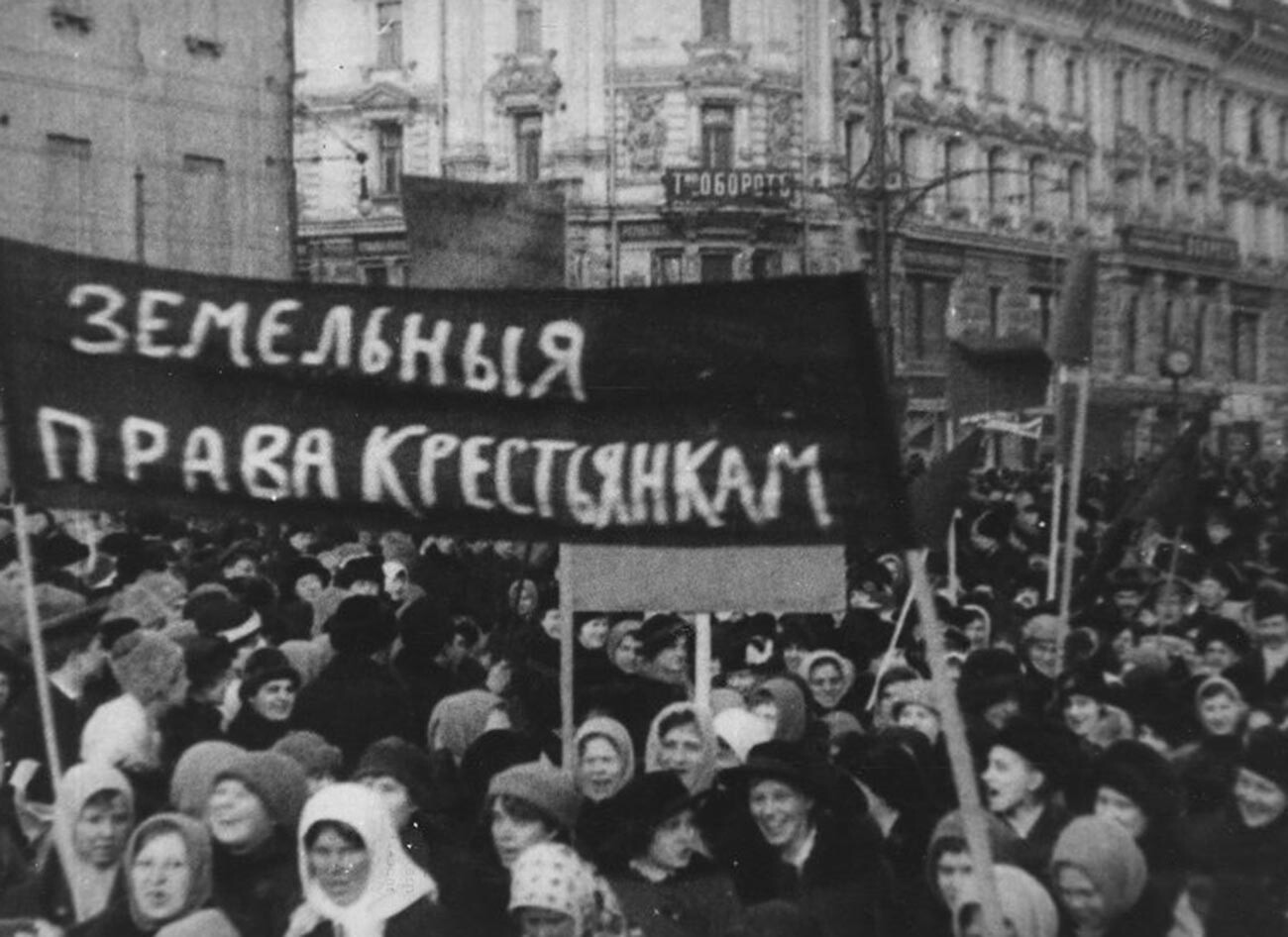 A banner with the inscription: “Land rights for peasant women”.

On February 23 (now March 8 according to the new ruling), 1917, women took to the streets against hunger and tsarism. It was not a peaceful rally at all, which kicked off the beginning of the February Revolution and put an end to the rule of the Romanovs. 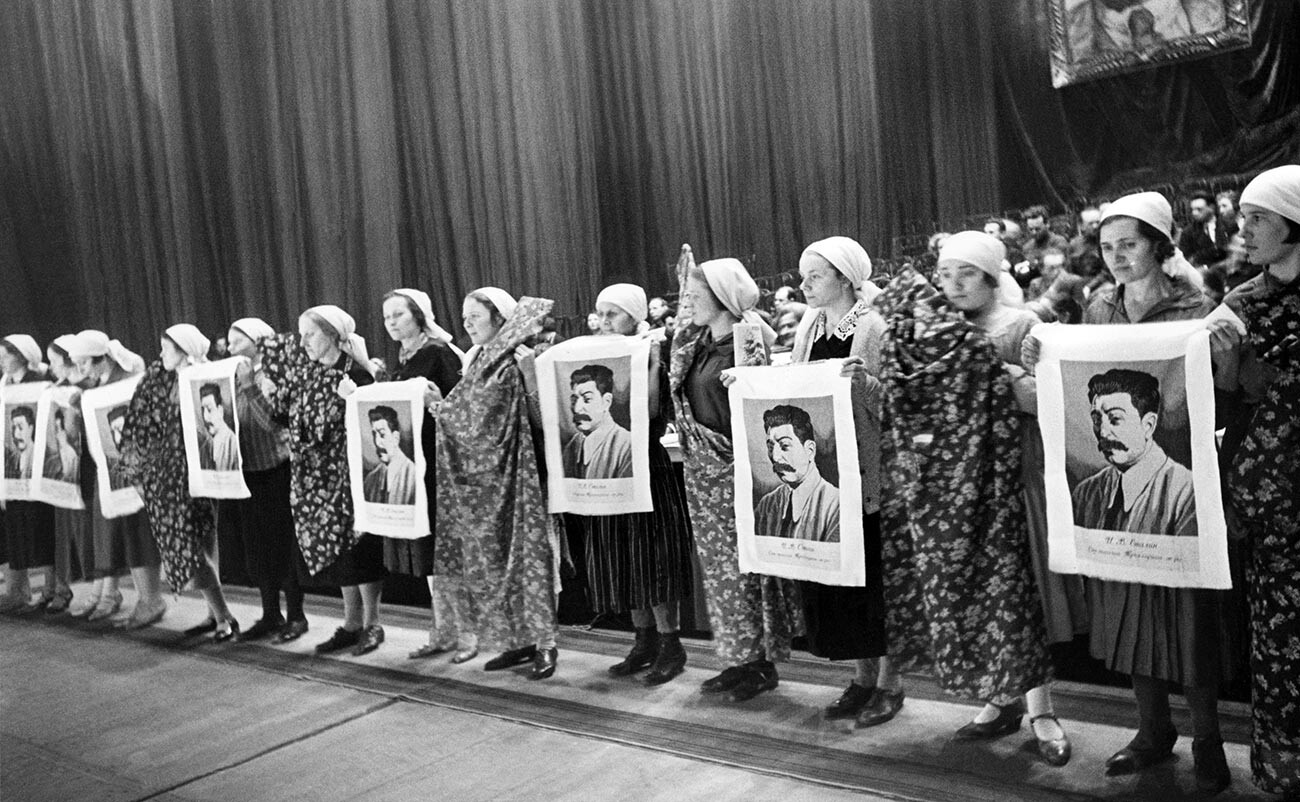 Workers of the Moscow’s Trekhgornaya Manufactory at a March 8 meeting, 1935.

In the following years, March 8 became the day when workers made solemn meetings at factories, where they talked about the women’s achievements in the Soviet industry and discussed the situation of working women in other countries. 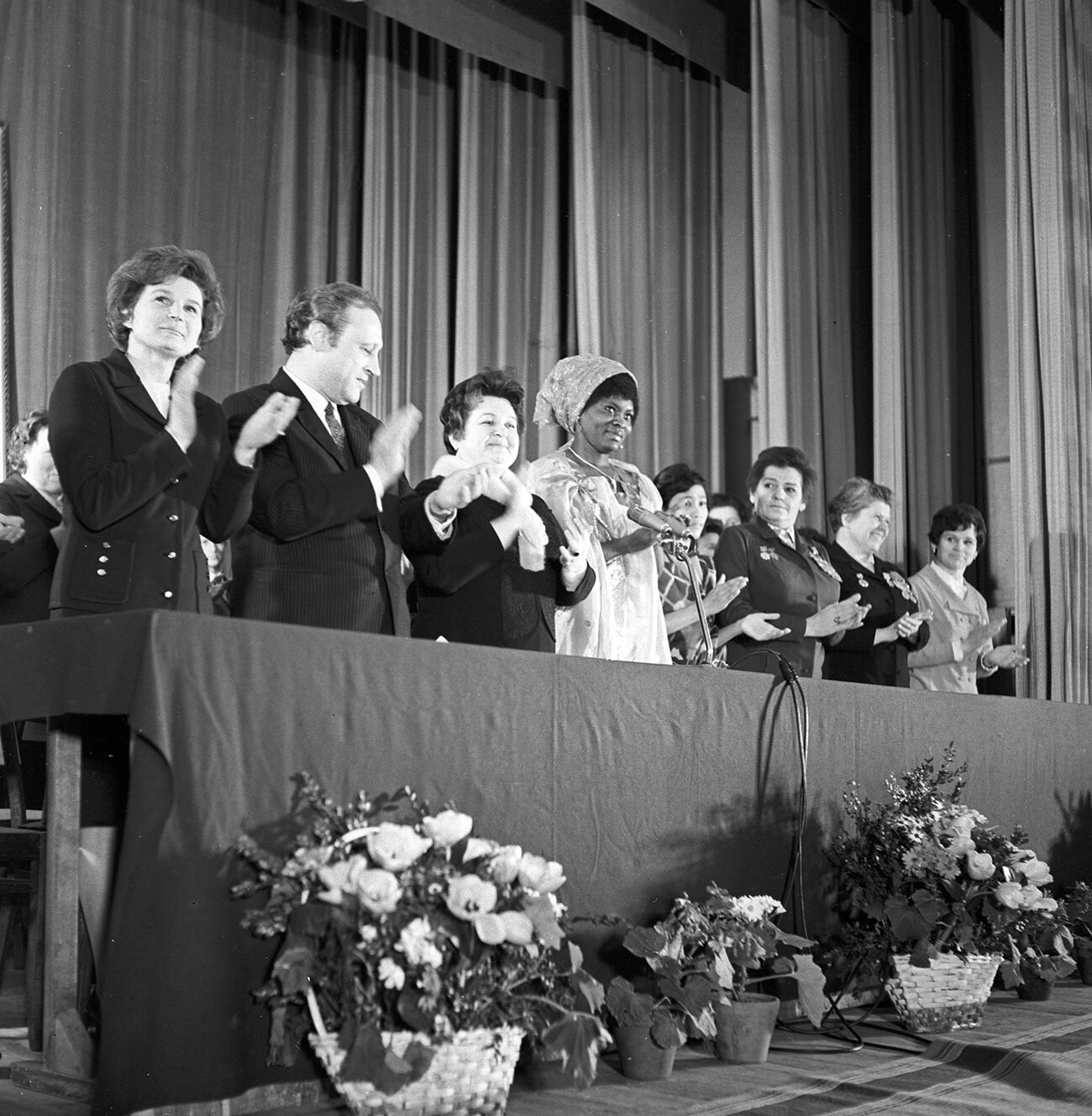 March 8 at the Peoples’ Friendship University. The Chairman of the Soviet Women Committee was cosmonaut Valentina Tereshkova.

On this day, female workers also were awarded for over-fulfillment of their work plan or for special merits at work.

To mark this day, Soviets issued postcards and postage stamps. 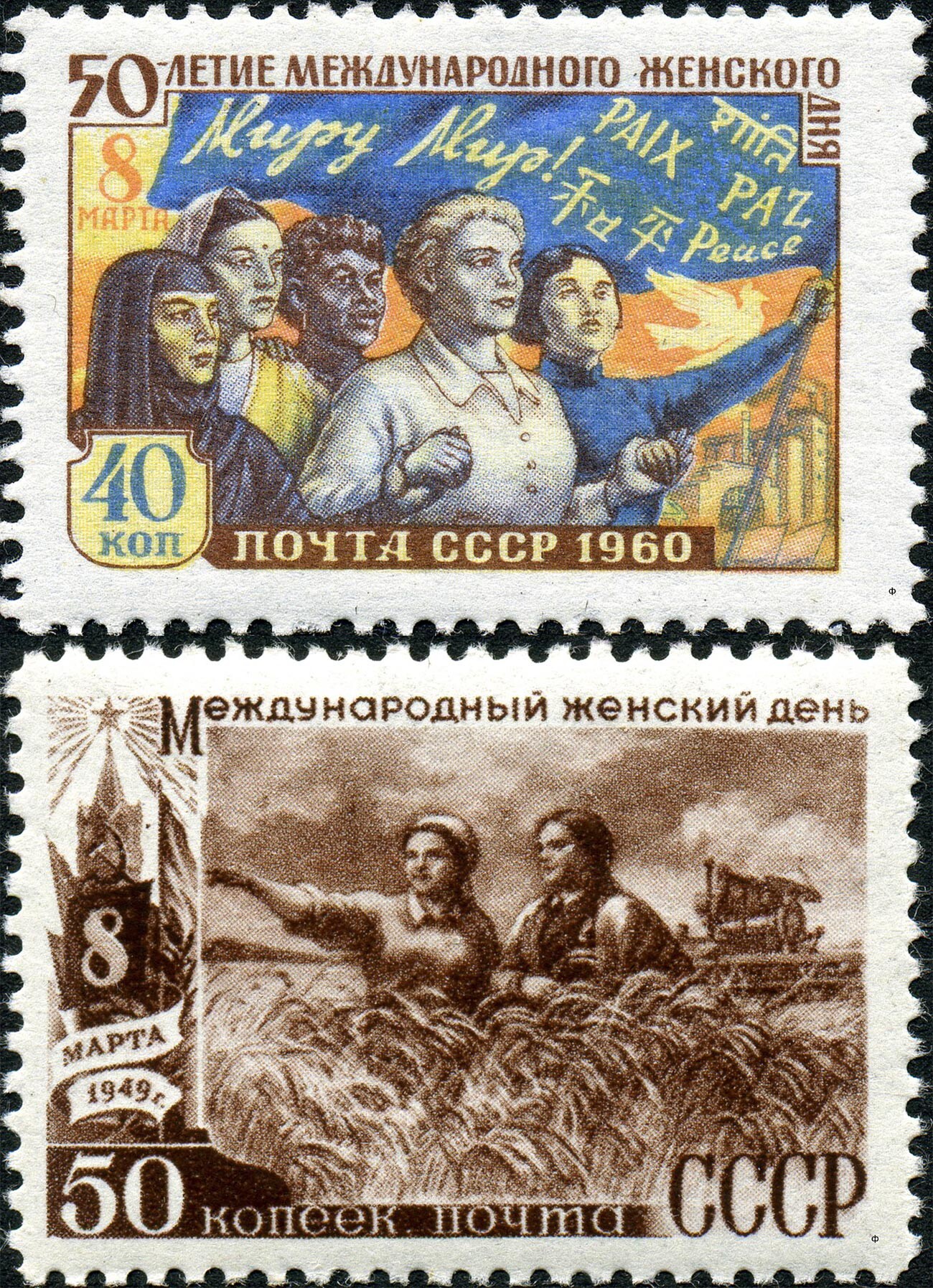 In fact, many Soviet factories were named not only after the famous communists, but also in honor of March 8. Most of them were textile factories that still operate today. 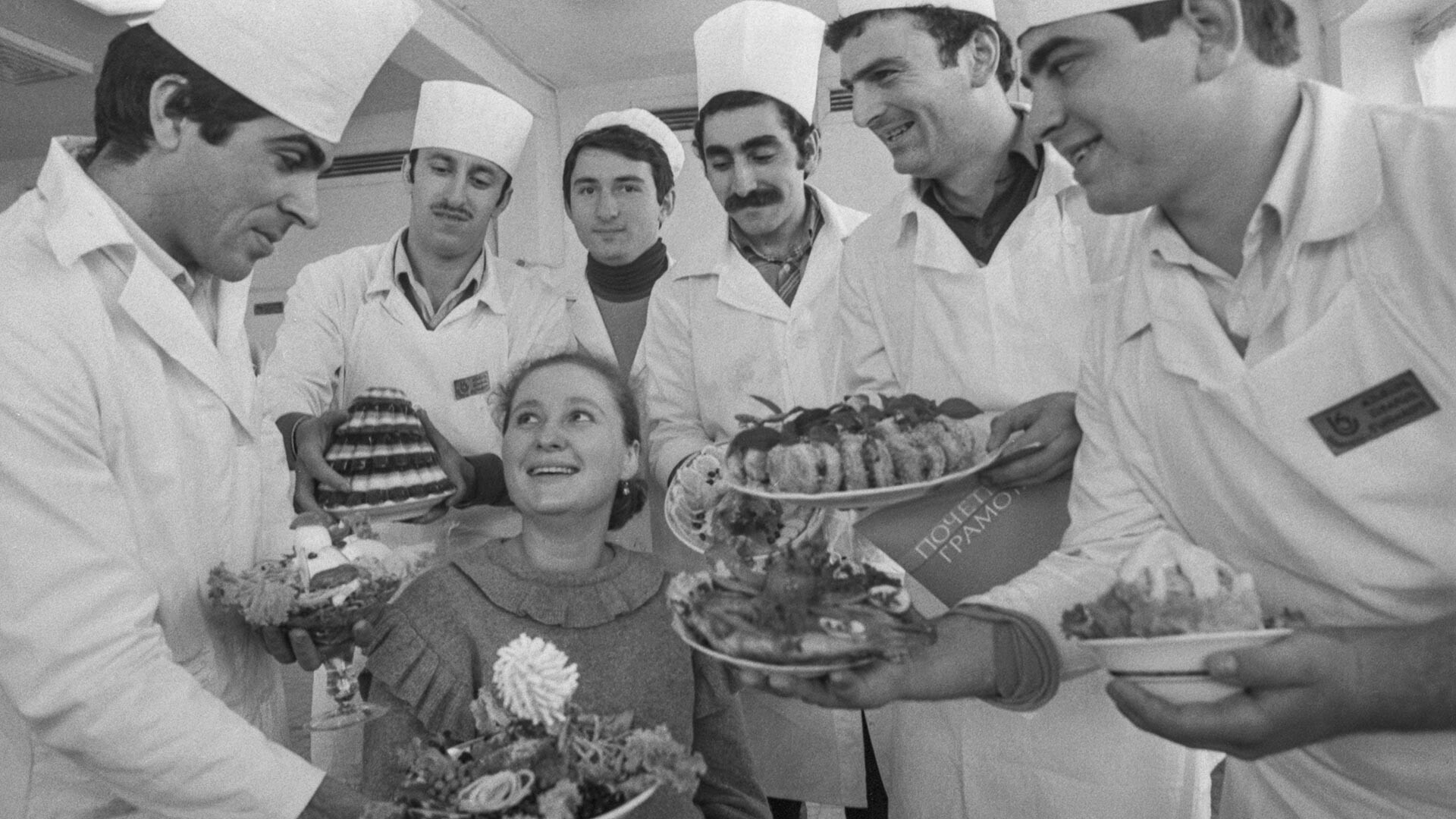 When March 8 became an official day off in 1966, the meetings were postponed to the previous (working) day and the holiday was celebrated at home. This was a certain turning point in the sense of the day itself. 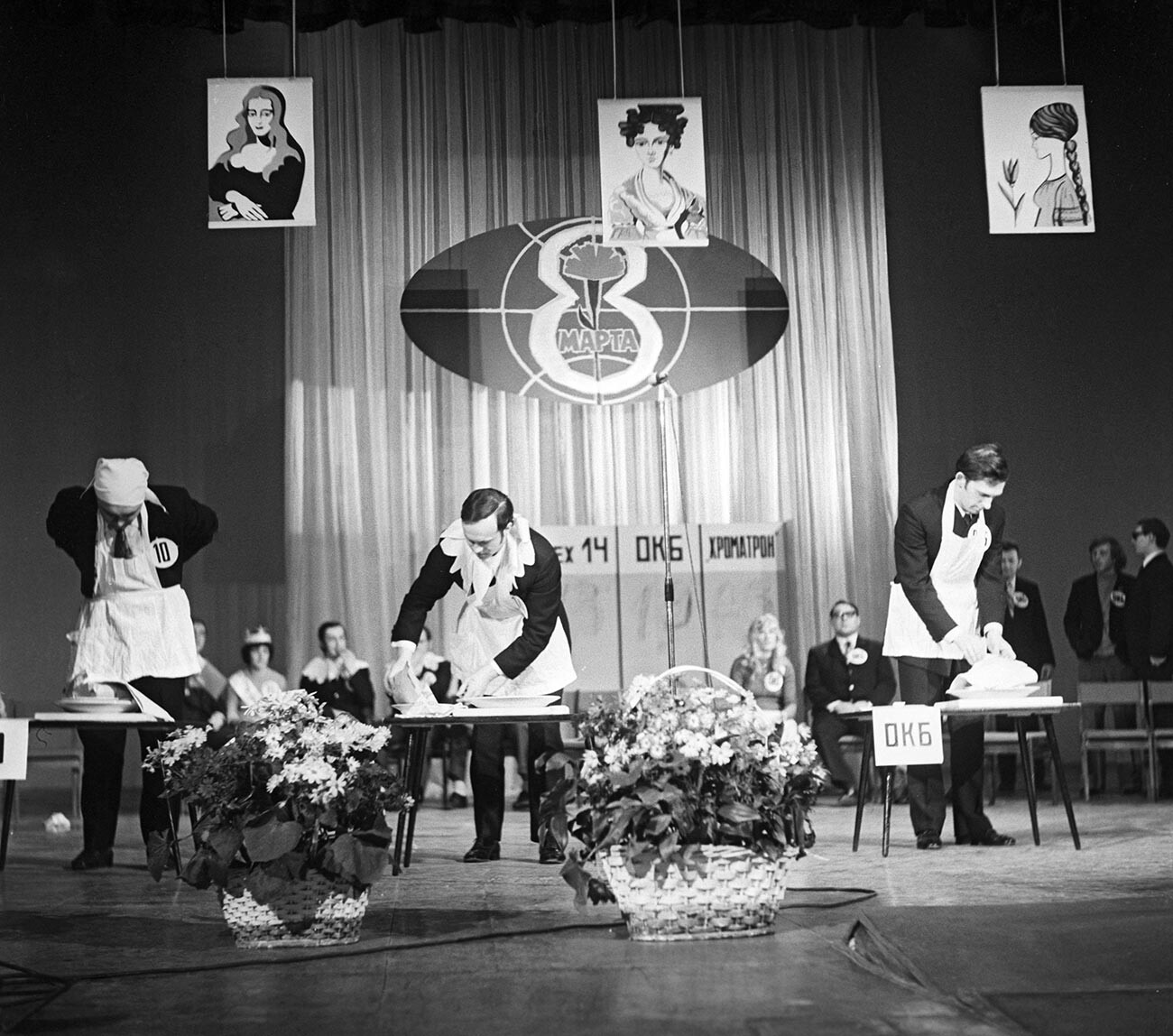 On this day, a man would also try on the role of a housewife: in the morning, he would bring flowers and cakes, then would cook lunch for the whole family. 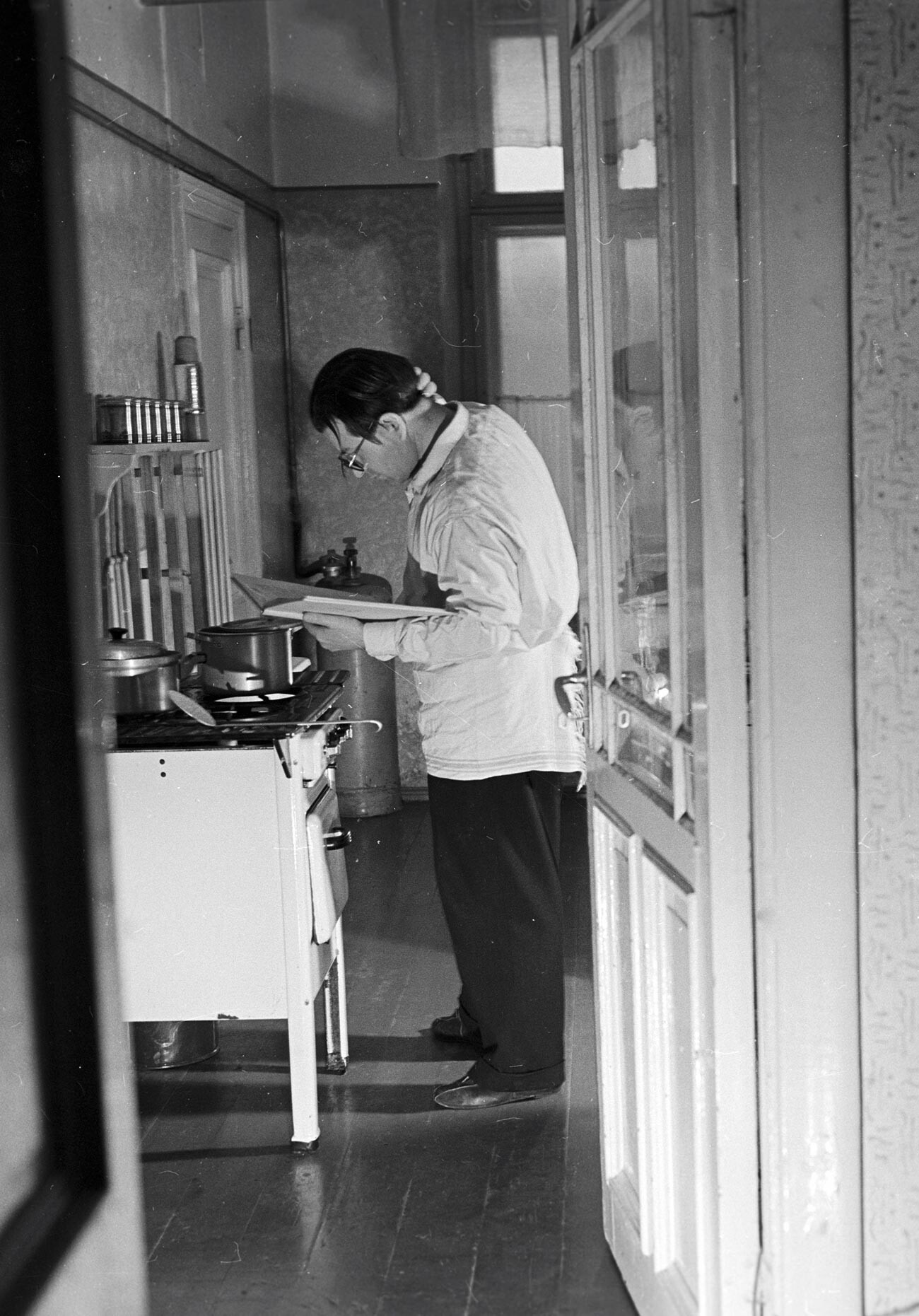 Lenin’s wife Nadezhda Krupskaya allegedly offered to present a mimosa flower to women on this day, because other flowers were extremely difficult to find at the cold time of year in Russia. 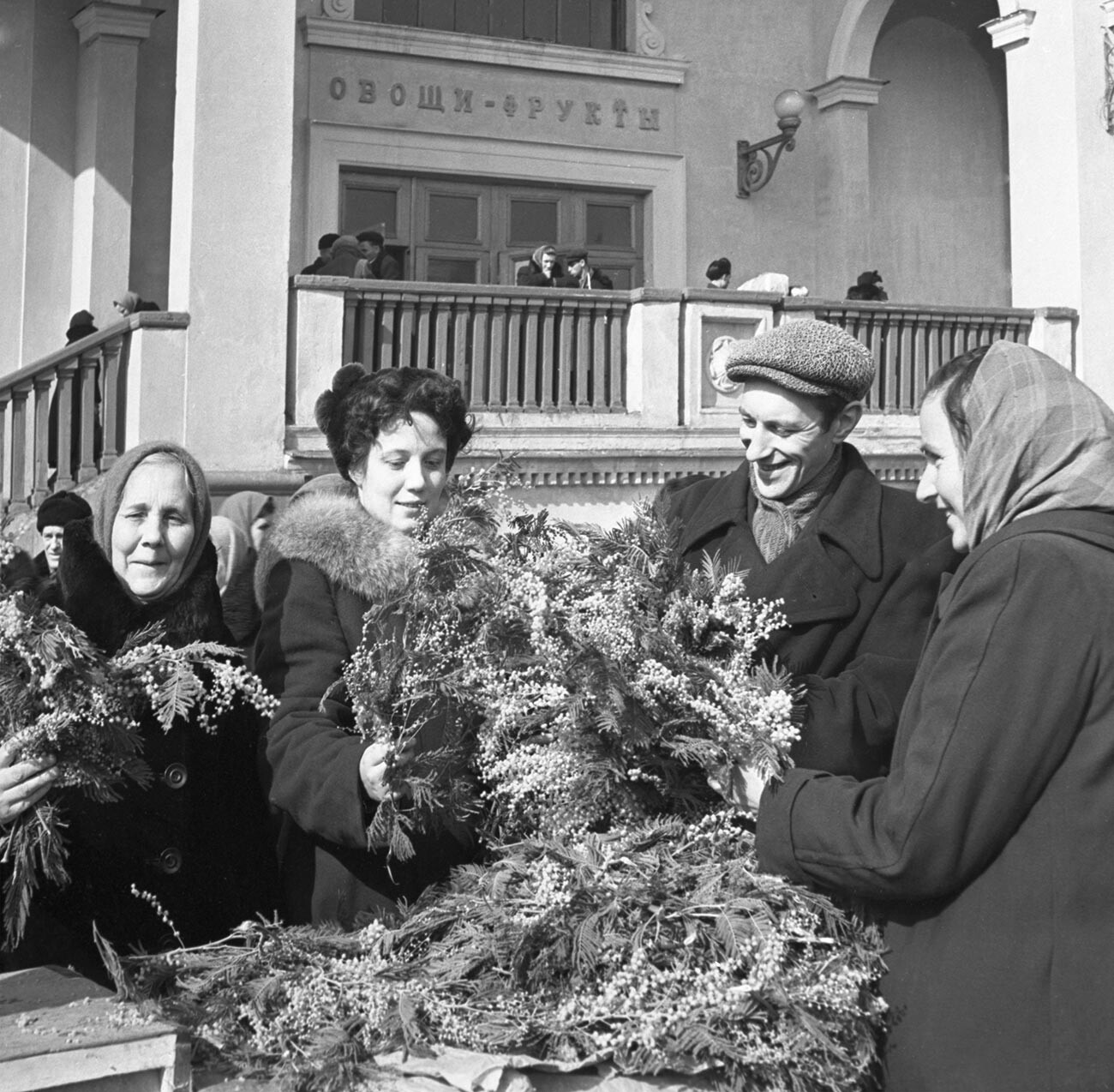 Children also participated in the feast preparation: they drew postcards and helped with the cooking. 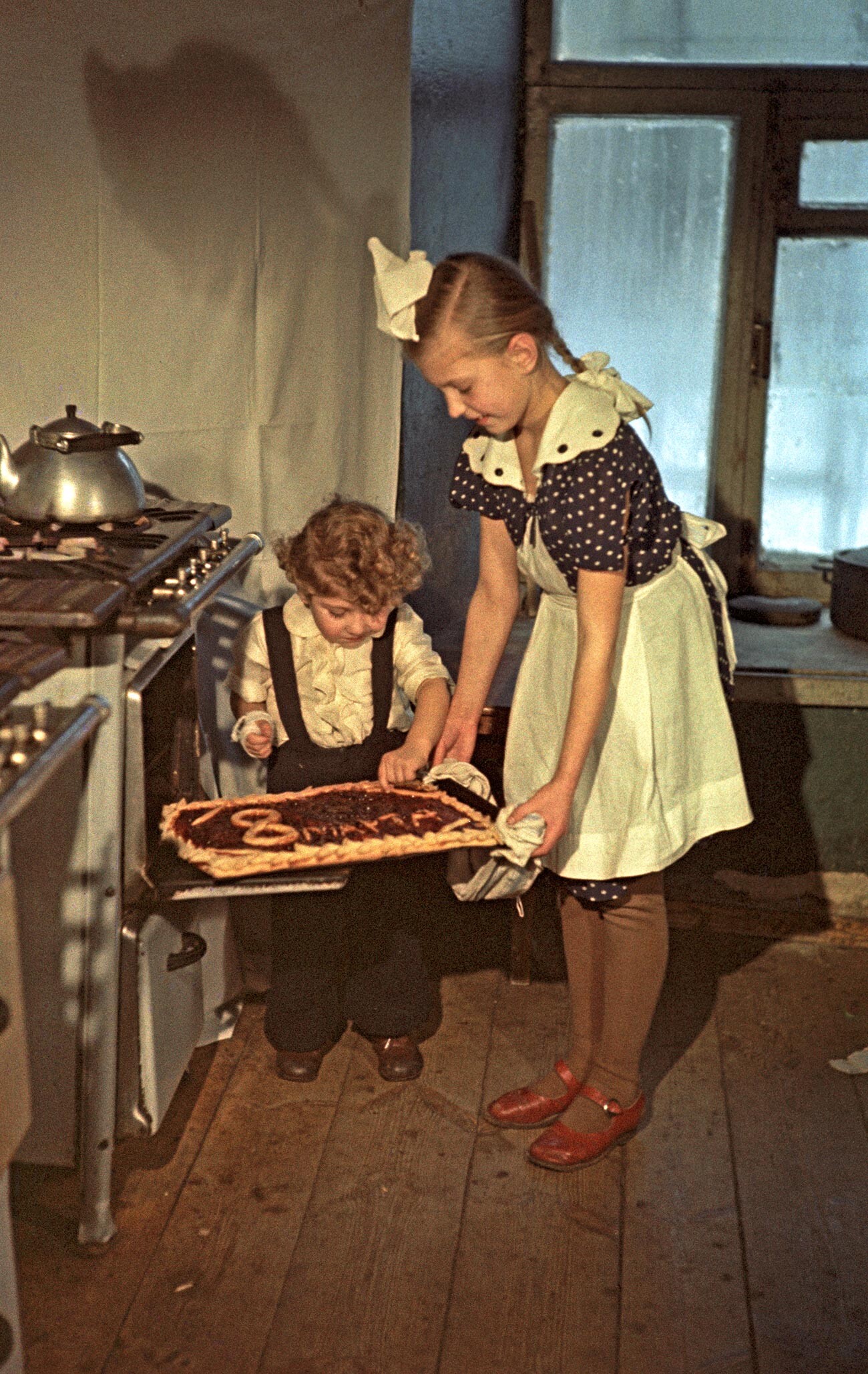 Women needed just to look beautiful on this day, wearing their best outfits and making a beautiful hairstyle, while relaxing from everyday life, because despite the declaration of equality, women did not give up their household duties. 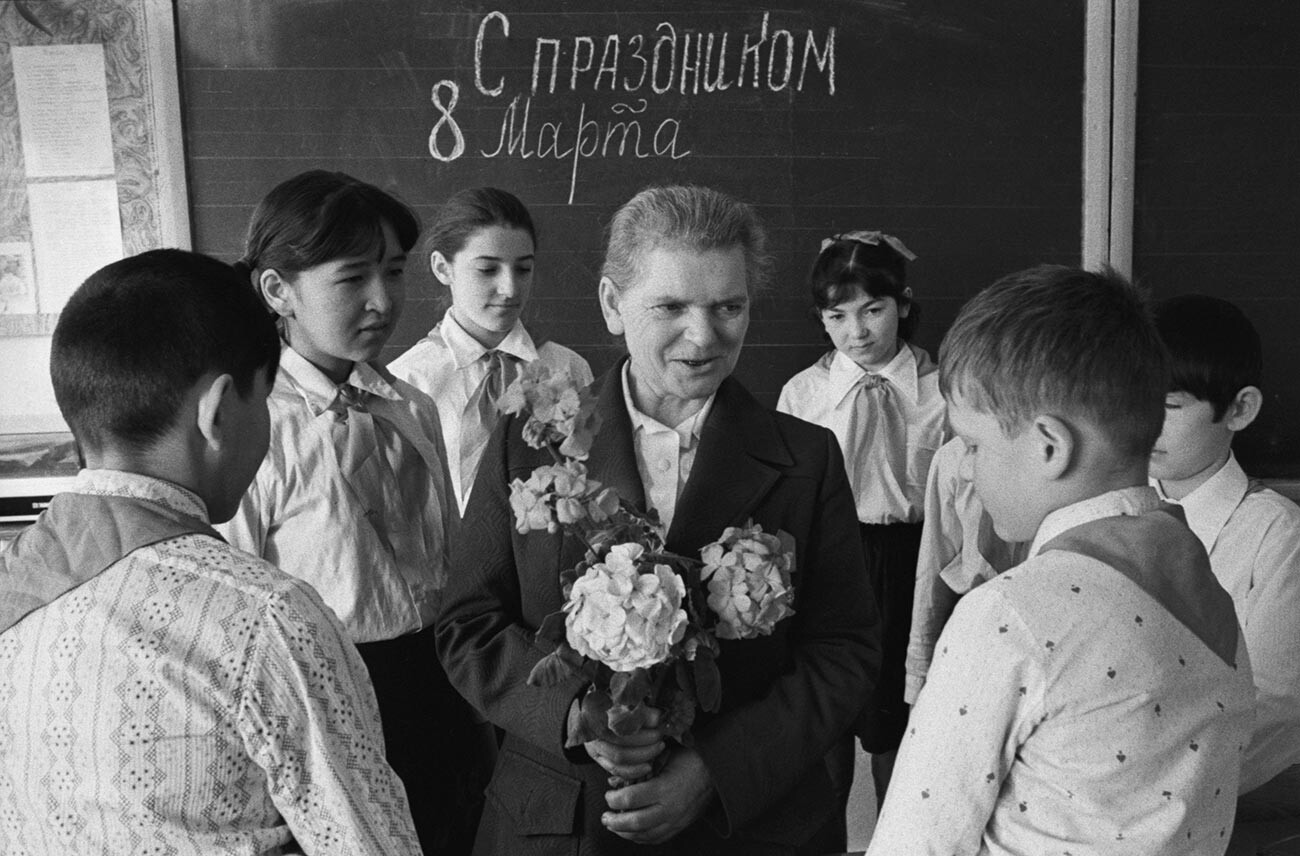 Today, the tradition of celebrating March 8 has been preserved in Russia, as in many post-Soviet countries. The main gift, as before, are flowers.