How a Russian Orthodox bishop was awarded the Stalin Prize 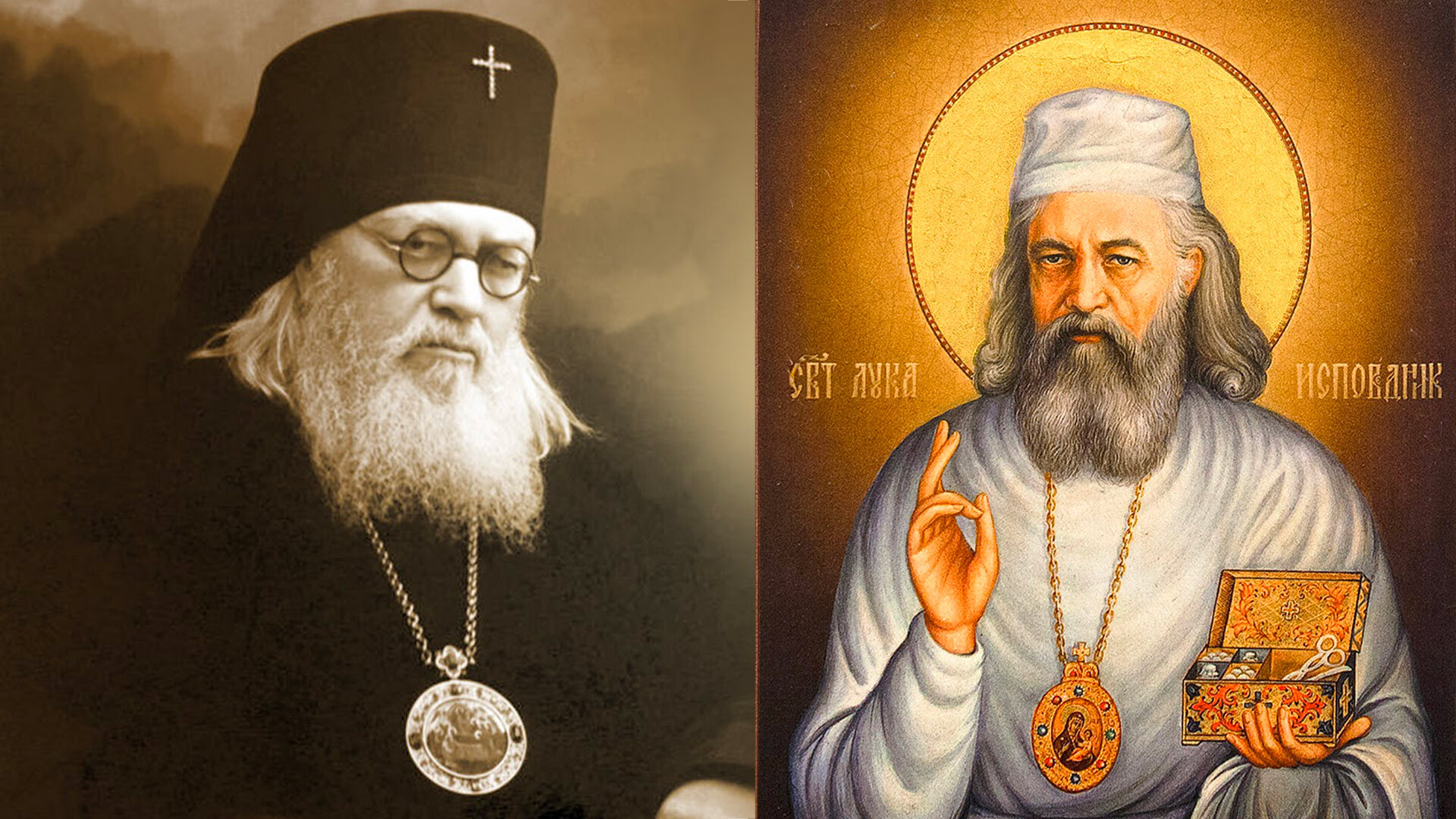 Church of Saint Luke in Yekaterinburg; The Russian Orthodox Church archive
Just imagine the breadth and depth of Archbishop Luke's personality – during his lifetime he was admired even by his ideological enemy, Stalin. After his death he was declared a saint.

Valentin Voyno-Yasenetsky received his PhD in medicine in 1915 and got his PhD in theology in 1959. He spent more than ten years in prison and exile, and worked as a surgeon in several wars. He was later known as Archbishop Luke, receiving the eminent position in 1946, the same year as he was awarded the Stalin Prize.

How Valentin Voyno-Yasenetsky became a doctor 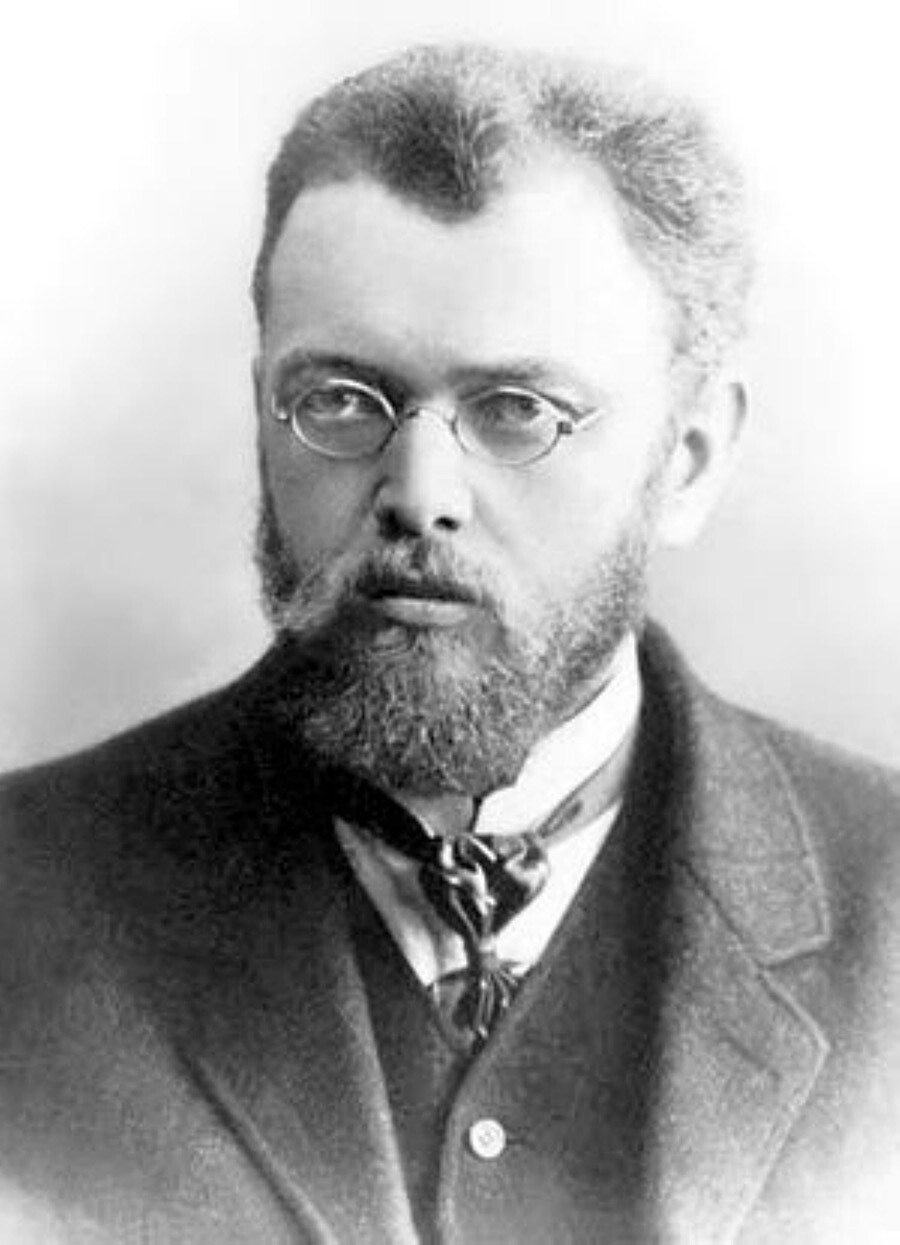 Voyno-Yasenetsky was born in 1877 in Kerch, a Crimean city of the Russian Empire. Coming from a russified Polish noble family, his father worked as a pharmacist. Later, the family moved to Kiev, where Valentin graduated from high school and, hesitating between art and medicine, chose the latter as the most socially useful job.

In 1904, he served in the Russian-Japanese War as a Red Cross doctor, performing surgeries on wounded soldiers. Later, he worked in hospitals throughout Russia and, at the same time, started scientific research. He traveled to Moscow and St. Petersburg to work in libraries, writing articles and giving lectures. Already having a wife and children, he successfully defended his dissertation and earned a PhD in medical science. 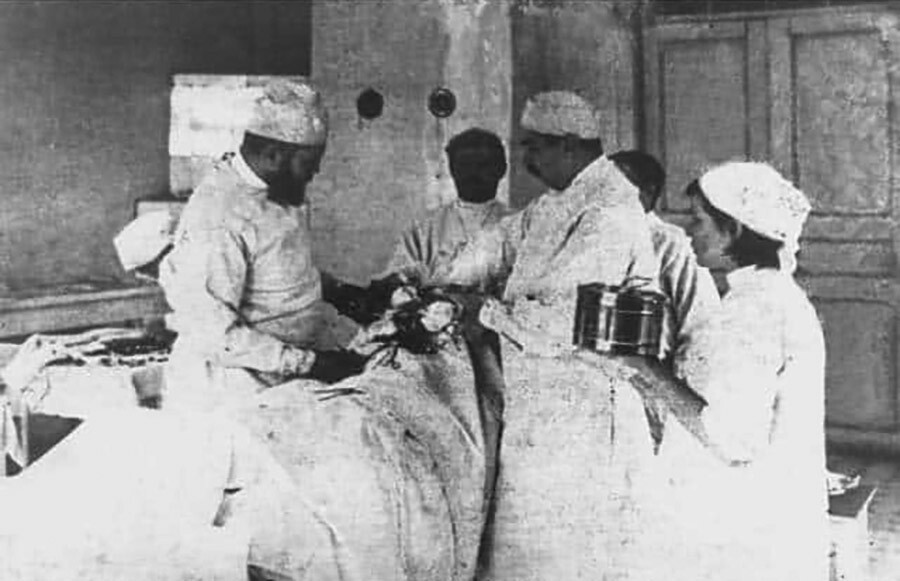 Voyno-Yasenetsky (left) during a surgery

In 1917, Valentin went with his family to the Central Asian city of Tashkent to set up a hospital - his wife contracted tuberculosis and he hoped that the southern climate would heal her. In Tashkent, Voyno-Yasenetsky was caught up by the 1917 Revolution and the Civil War. Once again, he performed surgeries on wounded soldiers, and at the same time he taught at the department of operative surgery in the newly founded Turkestan University. 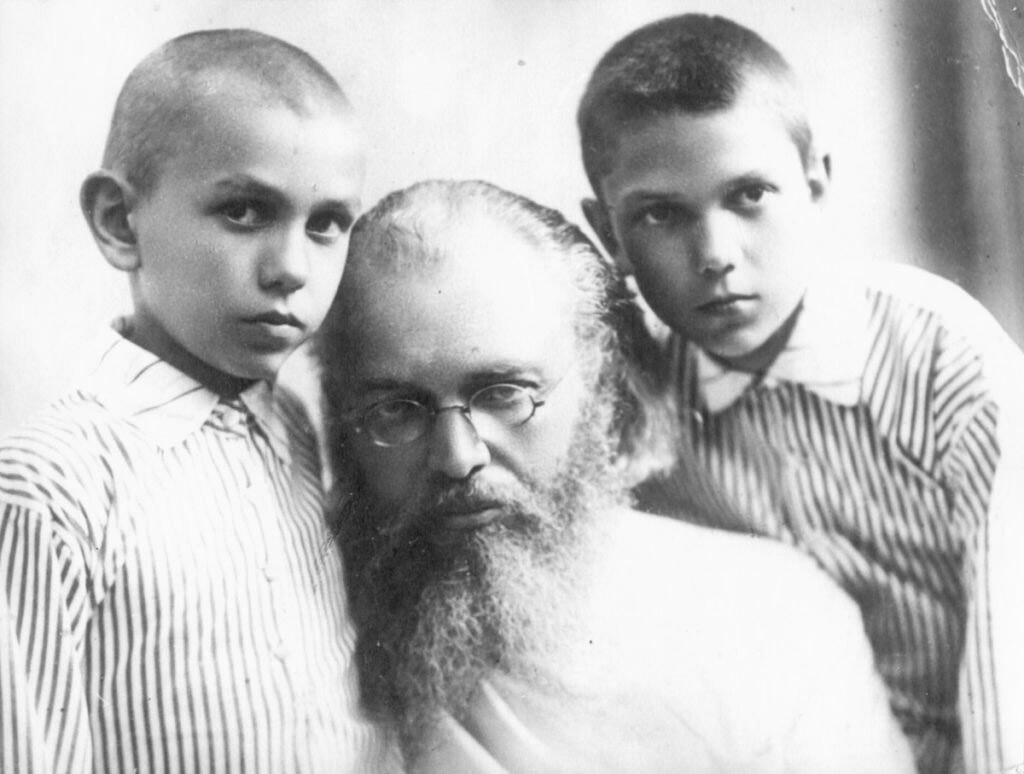 Valentin with sons in Tashkent

Brought up in the Orthodox Church tradition, Valentin only experienced a real spiritual calling in 1919 after the death of his wife. He started frequently visiting church and taking part in parish life. The church bishops suggested him to become a priest - he agreed and became a monk, taking the name Luke.

Henceforth, he wore a robe and a cross on his neck both to church services and in the hospital. Before surgery he used to cross himself and the patient no matter what religion one had (or didn’t have at all). Then in 1923, after the acting bishop was forced by the secret police to leave his post, Luke was offered to become a head of the Tashkent church diocese. 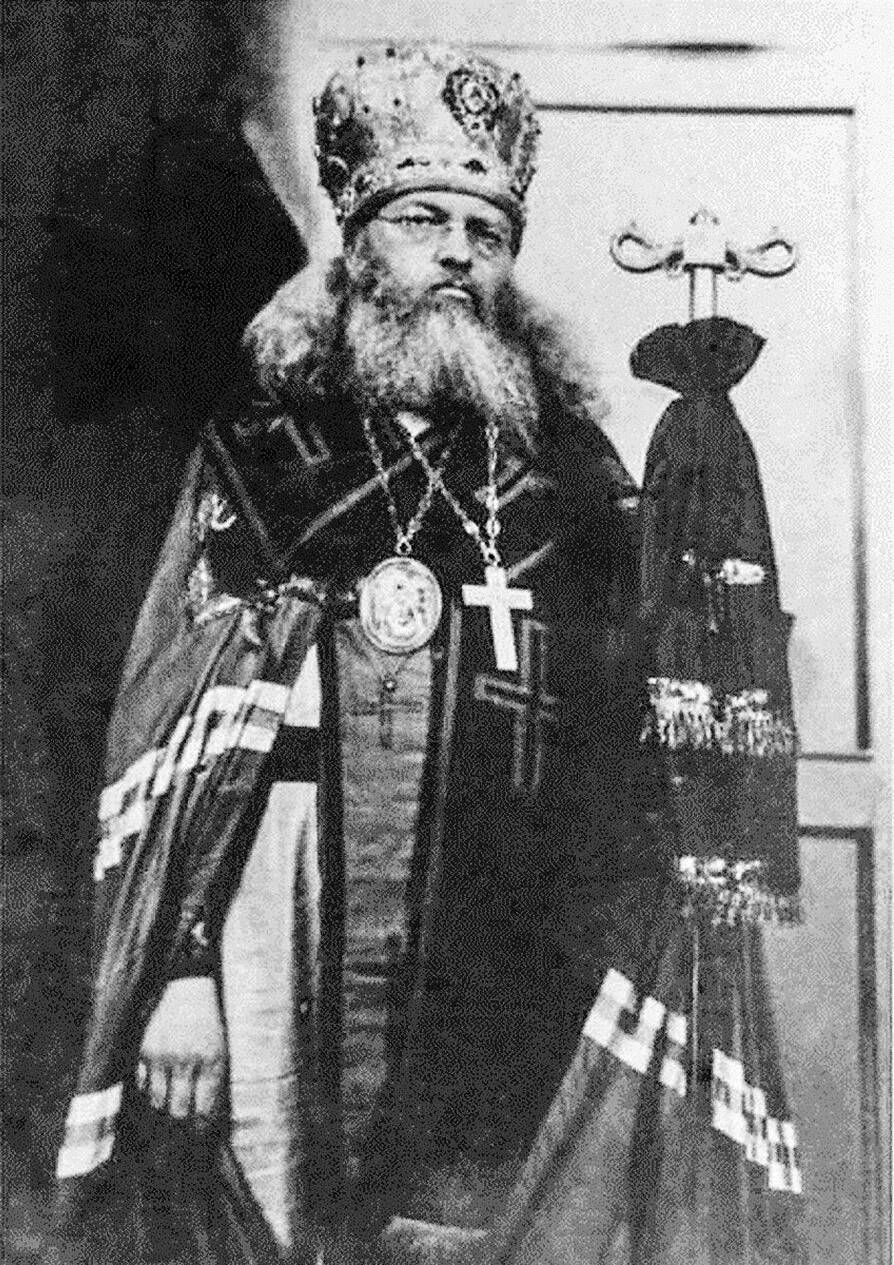 From that moment Archbishop Luke found himself in trouble with Soviet authorities. He was arrested during mass and taken for interrogation to Moscow where he said quite sincerely that "the workers' power is the best and fairest form of power", and that the ideas of communism were close to him. But he categorically disapproved of the revolutionary methods and violence.

In his autobiography, Archbishop Luke recalled that the Chekist tried to understand whether he was a friend or foe of Soviet power. "Both friend and foe," Archbishop Luke answered. “If I hadn’t been a Christian, I would probably have become a Communist. But you carry out the persecution of Christianity, so of course I’m not your friend." 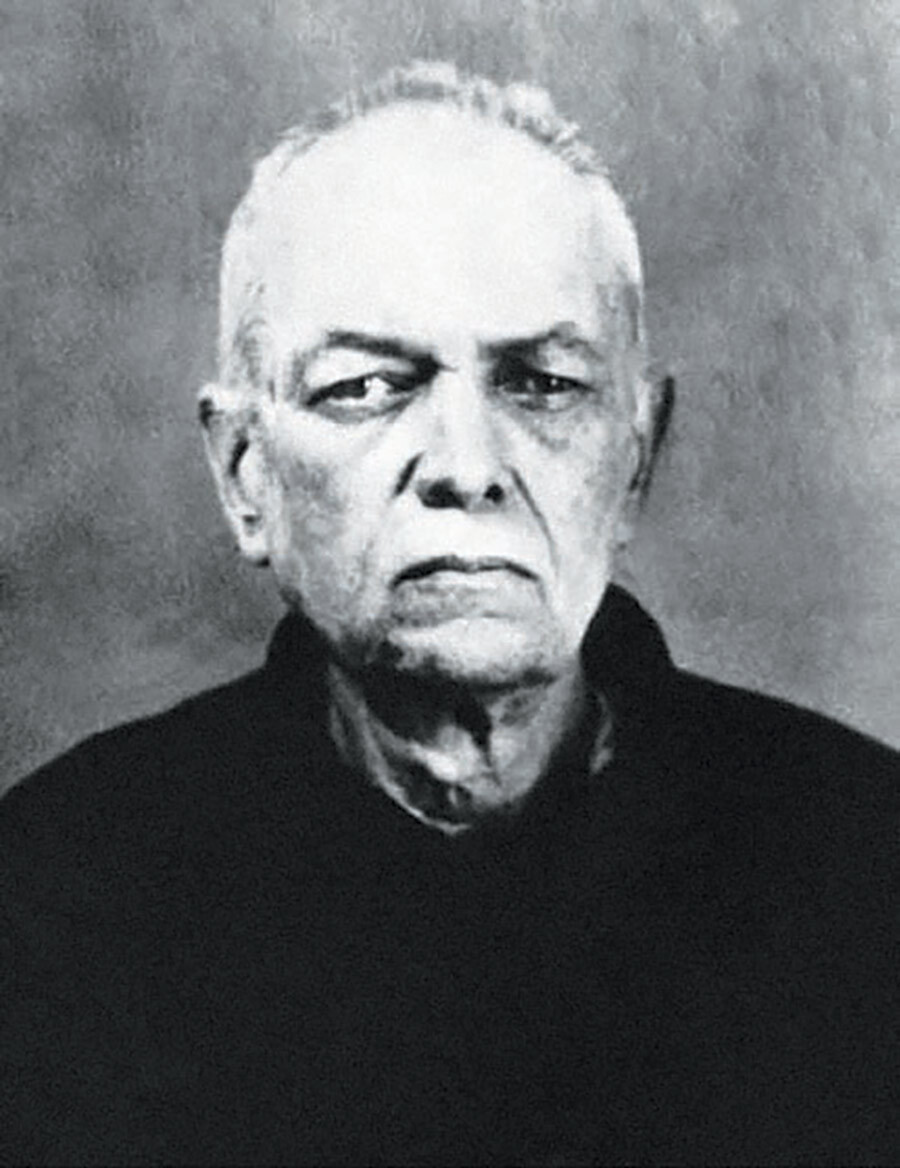 After some hesitation, the authorities exiled Archbishop Luke to Siberia for two years. In the backwater town of Turukhansk, Archbishop Luke became the only doctor in the hospital, even though his scientific papers on surgery were published in foreign journals at that time.

How a priest won the Stalin Prize 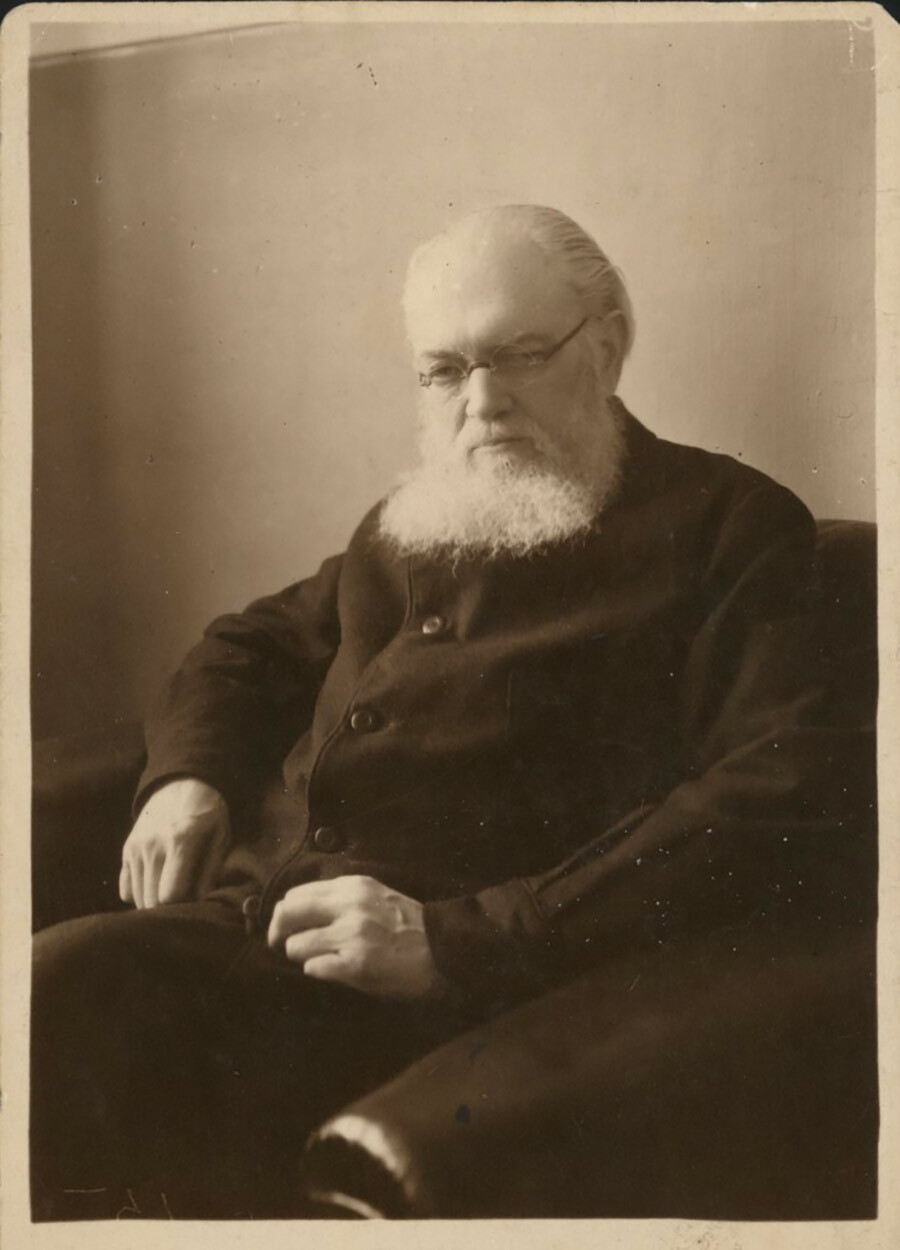 During the Russo-Japanese War of 1904-1905, long before the discovery of antibiotics in the 1920s, Archbishop Luke (still Valentin at that time) began his study on how to surgically counteract the purulent process that was killing many wounded soldiers on the front, as well as those who were operated on.

He kept researching and looking for solutions during the Civil War in Russia. In Siberian exile he finally began to write the main treatise that compiled his life’s work - "Essays on Purulent Surgery". This monograph became the leading encyclopedia in this field, and the author recounted many true cases from his own medical practice. 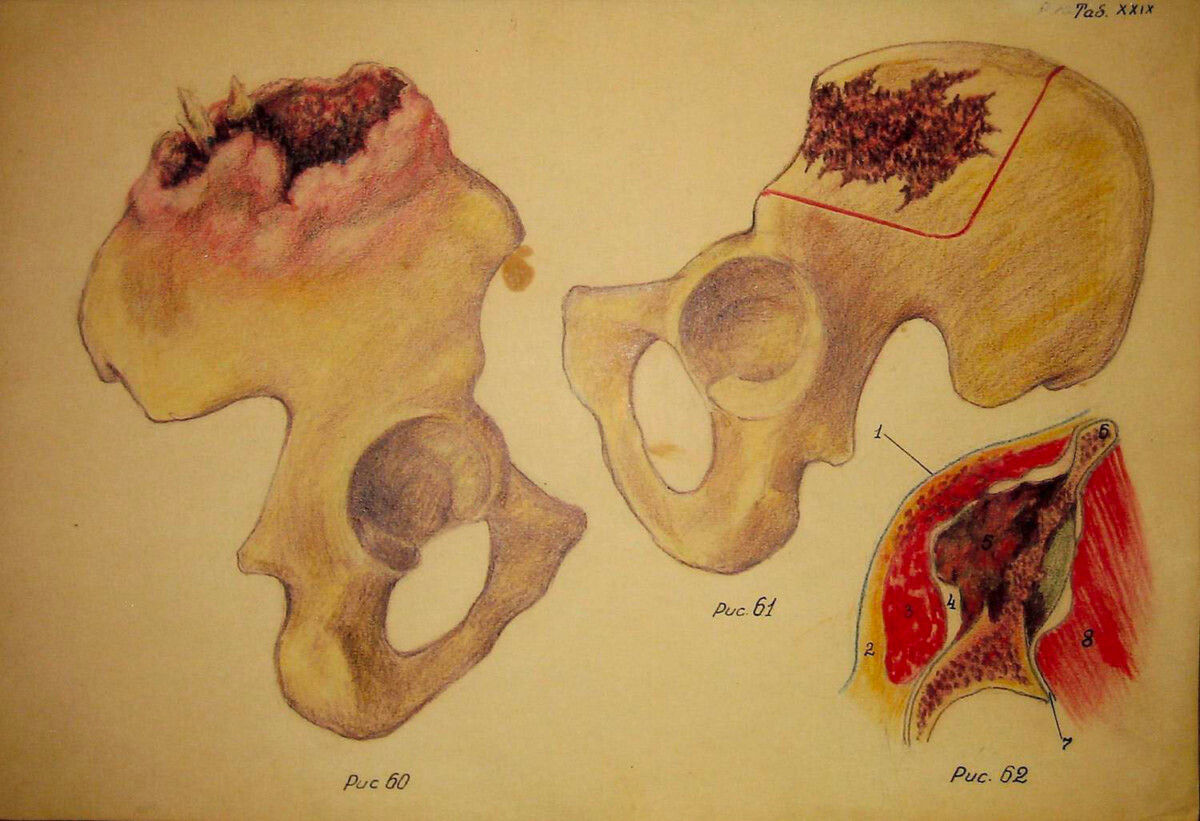 Archbishop Luke was no longer in charge of a diocese, but he continued to serve and preach. In 1937, when Stalin's purges began, Archbishop Luke was again arrested for his religious activities, and by a lucky coincidence he was given a relatively mild sentence (by the standards of that time) - a five-year exile to Siberia.

Archbishop Luke began working in a military hospital, and in the early 1940s he became chief consultant of all hospitals in the Krasnoyarsk Region, and at the same time he became Archbishop of Krasnoyarsk. He asked the authorities to send him to the front during World War II, but despite his impressive experience, he was left in exile. Still, he didn't give up and he raised funds to support the front. 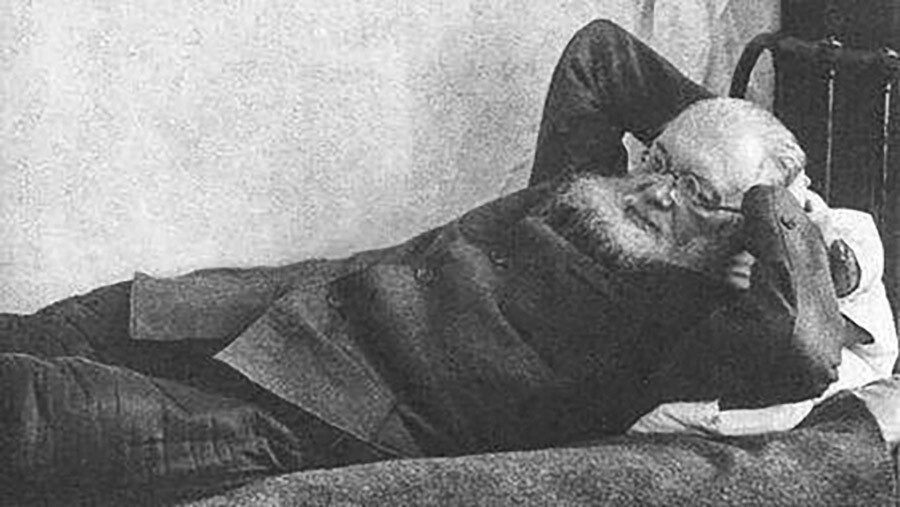 Luke during his Siberian exile, 1941

In 1946, Archbishop Luke became the only priest who was awarded one of the highest forms of civil recognition in the USSR - the Stalin Prize. The award was given specifically for "Essays on Purulent Surgery" and other scientific works. He donated the significant amount of prize money to orphanages.

After Archbishop Luke received the award and returned from exile, the Patriarch sent him to serve in the Simferopol diocese in Crimea, where he also began to consult the local military hospital. In 1955, Archbishop Luke became blind and could no longer practice surgery, but still, he continued to preach. 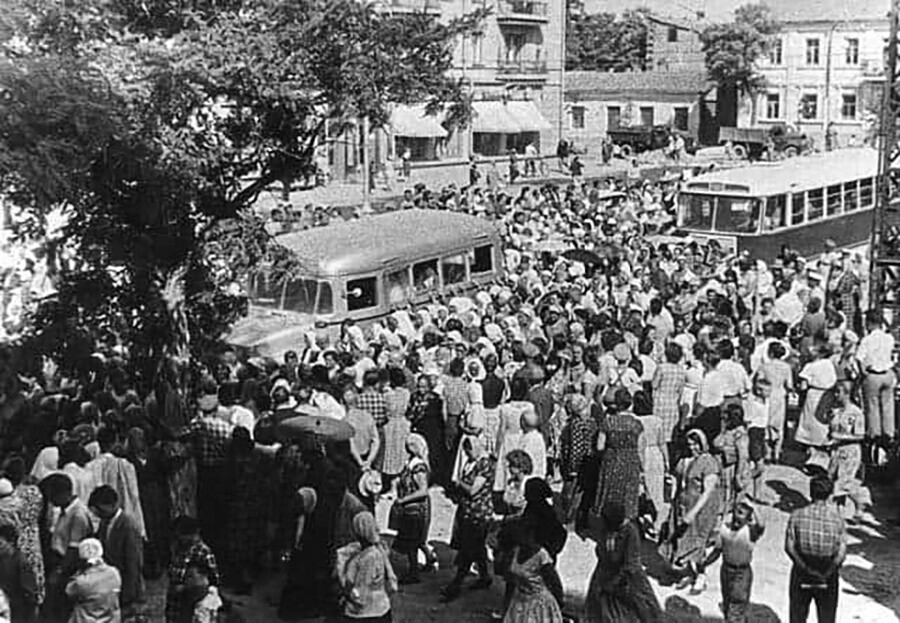 Funeral of Archbishop Luke in Simferopol, 1961

After having spent a life wandering all over Russia, he died in 1961, in the very place where he was born - in Crimea.

How Luke became a saint

One day in 1921 the young Luke was asked to be an expert in a trumped-up "doctors' case", where the accused medical officers faced charges of purposely "festering" wounded soldiers during the Civil War. In his book, The Life of Voyno-Yasenetsky, Archbishop and Surgeon, Mark Popovsky, Luke’s biographer, recounts an incredible dialogue that took place during the interrogation.

The prosecutor asked Luke: "How is it possible that you pray at night and cut people during the day?" Luke's answer caused laughter and applause in the audience: "I cut people to save them, and what's your goal when cutting them, Mr. Prosecutor?" 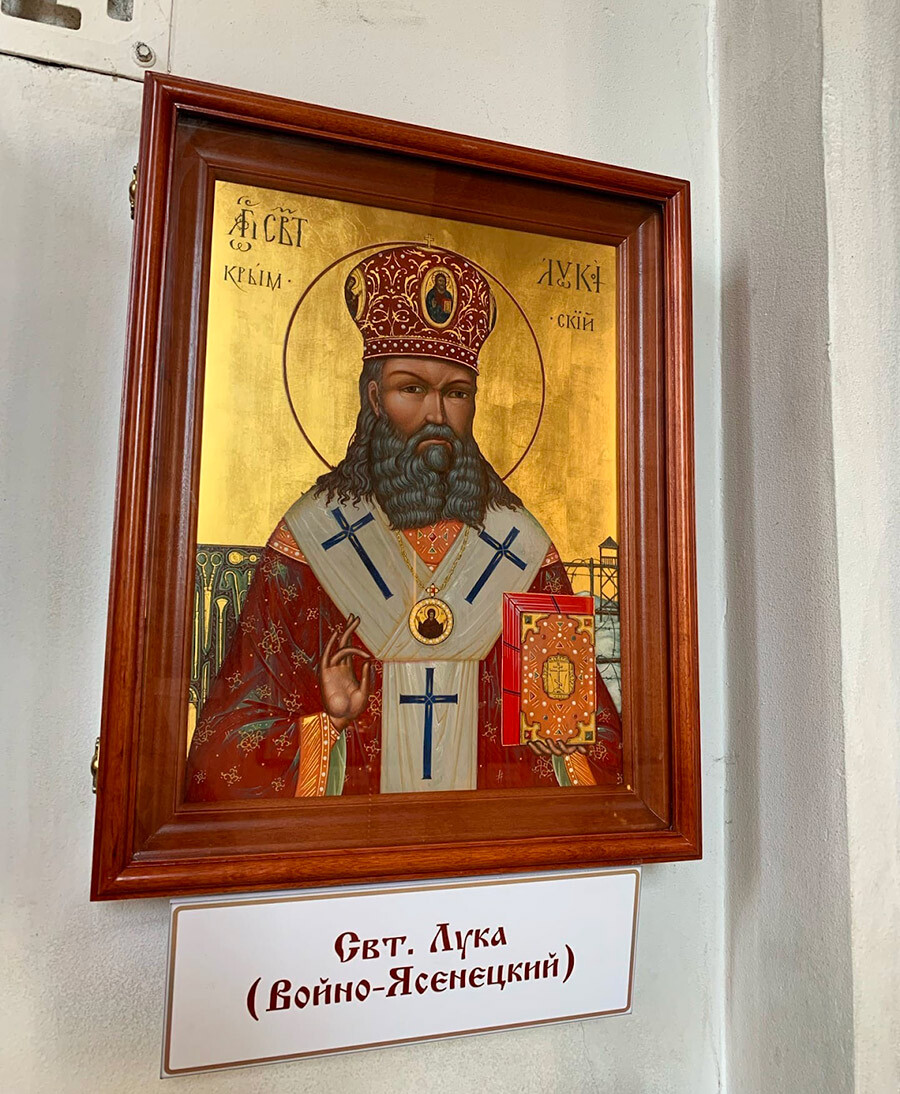 Then, the prosecutor decided to go all out and asked: "How is it possible that you believe in God? Have you seen him, your God?" Luke brilliantly parried this, too: "I really haven't seen God, Mr. Prosecutor. But I've done surgeries on the brain opening up the cranium, and I've seen no mind there, either. Nor have I found a conscience there.”

"The bishop-professor brought together the cross and the scalpel in his hands," Popovsky wrote. The personality of this man captivated the biographer so much that within 20 years of writing his biography, Popovsky, an atheist who used to write about scientists and science, even embraced the Orthodox faith. 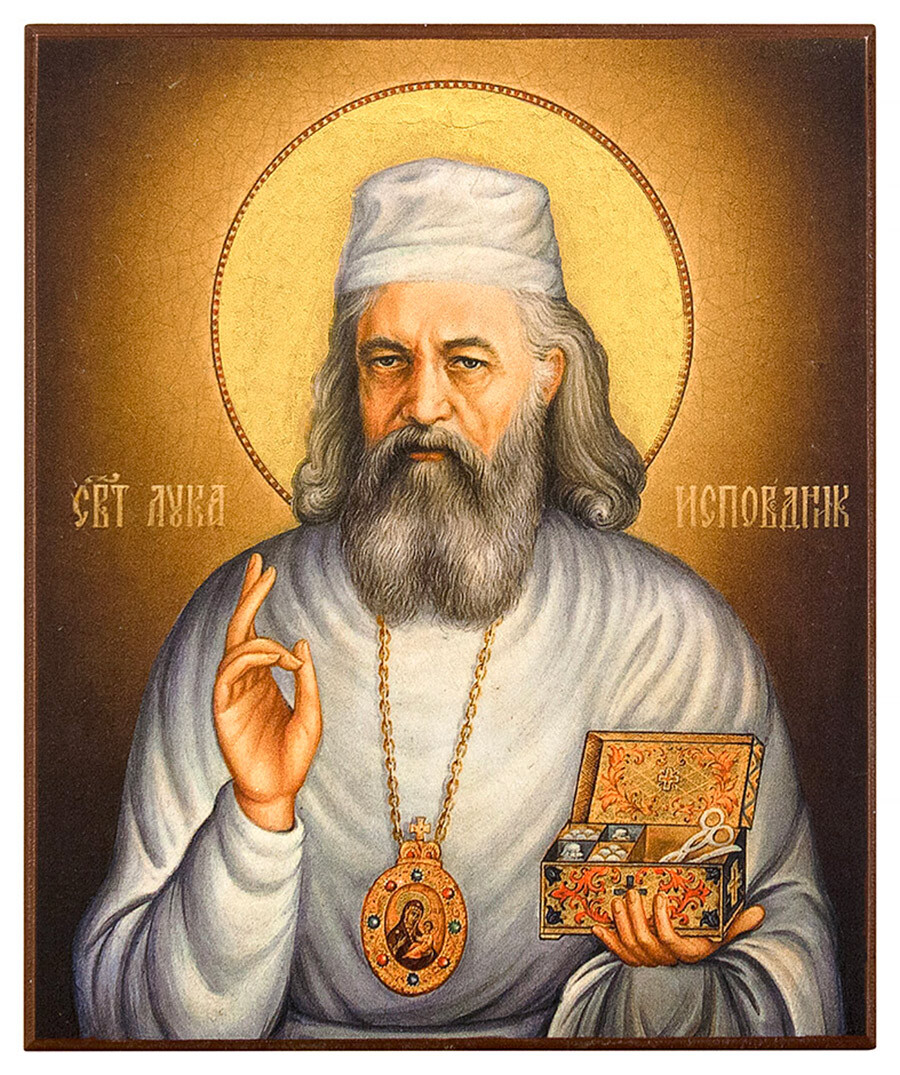 Church of Saint Luke in Yekaterinburg

"I've never seen him angry, furious, or simply irritated," wrote doctor Lev Oshanin, who worked with Archbishop Luke. "His face never expressed annoyance or dissatisfaction, or that he was disturbed by trifles (from the point of view of an experienced surgeon). On the contrary, I felt he was always very eager to help." He wasn't nervous even when under arrest, uncertain of his fate.

Luke was always honest and courageous - he prayed, preached, and hung up icons openly - even during the worst years of church persecution. "A man of selfless faith, unbending will, and devotion to duty," is what the Soviet priest and dissident Alexander Men wrote. 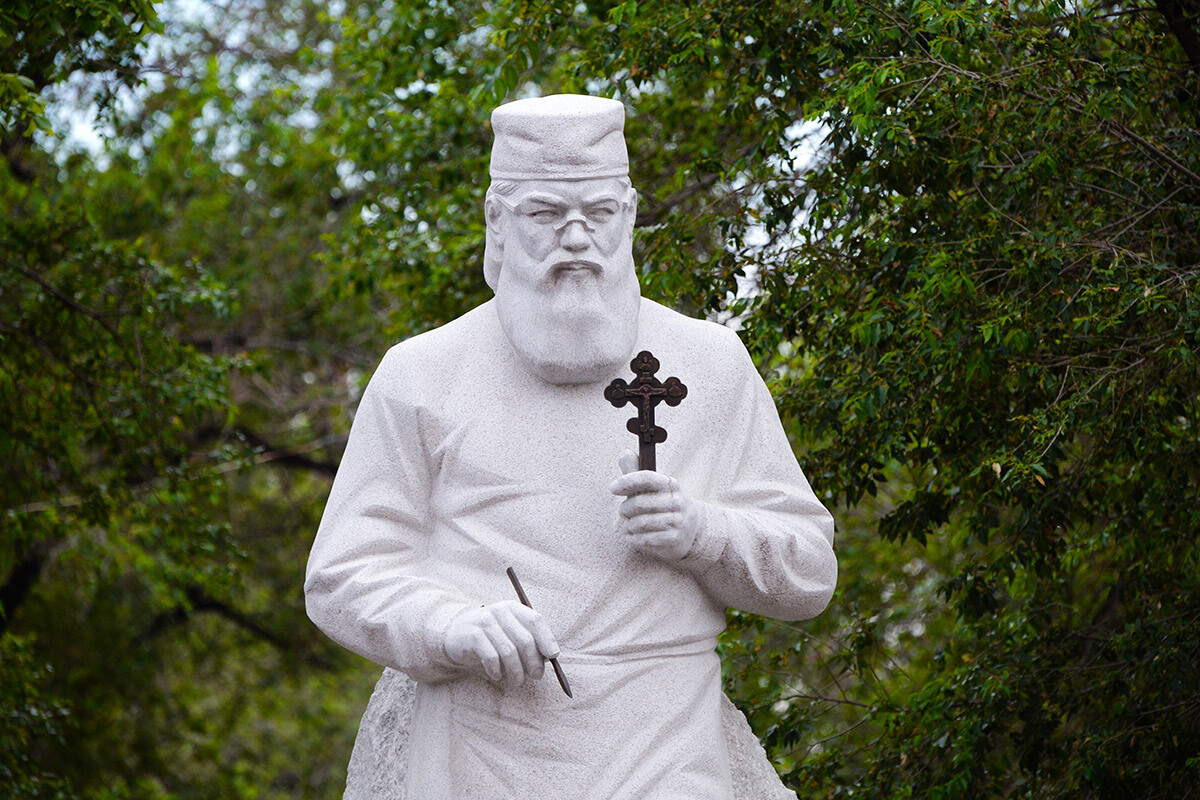 Several years after the USSR collapsed, in 1995, Luke was recognized as a martyr-saint in the Crimea and Krasnoyarsk. Five years later he became an All-Russian saint, a "new martyr and confessor", often referred to as St. Luke of Simferopol, and even Saint Luke the Blessed Surgeon.