What punishment could a Soviet citizen get for marrying a foreigner? 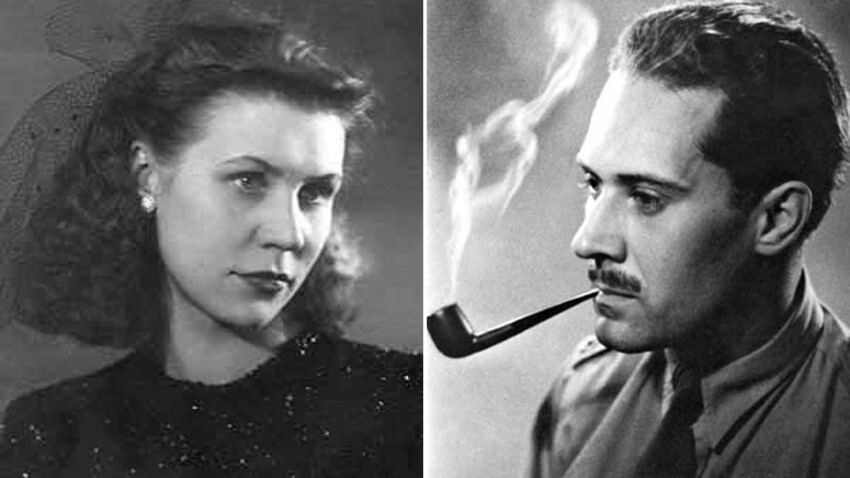 'Lotia' Literary and Publishing Center, 2016
Women who married foreign men in 1940s USSR could spend multiple years in a labor camp. Soviet security agencies ran a program of strict surveillance on such ladies. Very few ever managed to reunite with their husbands – often paying a heavy price on top of it.

The Kharitonenko mansion on Sofiyskaya Embankment in Moscow served as the British Embassy back in the day, hosting numerous venerable guests at different periods, including Herbert Wells, Isidora Duncan, Winston Churchill and many more. But, starting in August of 1945, it became a sort of prison for 15 Soviet women who had fallen in love with British men and had subsequently become their wives.

Brits appeared in the Soviet Union under varying circumstances – some were technical specialists helping the USSR industrialize; others were sailors in the Arctic convoys, delivering cargo to Arkhangelsk and Murmansk under the Lend-Lease agreement after World War II and so on. Although forging relationships with the Russian population wasn’t encouraged, friendly and often romantic relations did occur, nonetheless. In wartime, a total of 35 marriages between Russian women and Brits took place. Twenty of the women managed to leave the country together with their husbands, while the remaining 15 were detained at the border. The war was over and Soviet authorities quickly became against Soviet citizens leaving for Britain, even if it was to live with their husbands.

“Give us back our wives!”

The Kharitonenko Mansion, Sofiyskaya Embankment, Moscow. The building that housed the British Embassy in the USSR.

Wary of persecution at the hands of the People’s Commissariat for Internal Affairs (NKVD), the women appealed to the British embassy for help. Among them was Lyudmila Khokhlina – the wife of Peter Squire, a British diplomat. After the war, her husband was ordered to return home, while Lyudmila was denied permission to leave. Together with other British husbands, Peter would stand in front of the Soviet embassy in London with a banner that read “Give us back our wives!”, asking to be reunited with his wife. All to no avail. Meanwhile, back in the USSR, the British ambassador invited all 15 of the remaining women to a meeting and suggested that they file for divorce. Nearly all agreed. In 1948, the ‘Izvestia’ newspaper published an “open” letter by Lyudmila (most likely not written by her), which, among other things, contained the following text: “Having found out that my husband took part in an anti-Soviet campaign, I do not wish to remain the wife of such a person.” Despite this “confession”, she would spend nearly eight years in Soviet labor camps.

It wasn’t until 1960 that Lyudmila managed to get in touch with Peter. He hadn’t forgotten her, waiting for news for a long time. However, by then, he had already remarried – to another Russian.

Of the 15 women who were ‘imprisoned’ in the British Embassy, only one eventually managed to leave for Britain. Her name was Klara Hall. She steadfastly refused to leave the British embassy, staying there for a further 18 months until finally being exiled from the USSR. 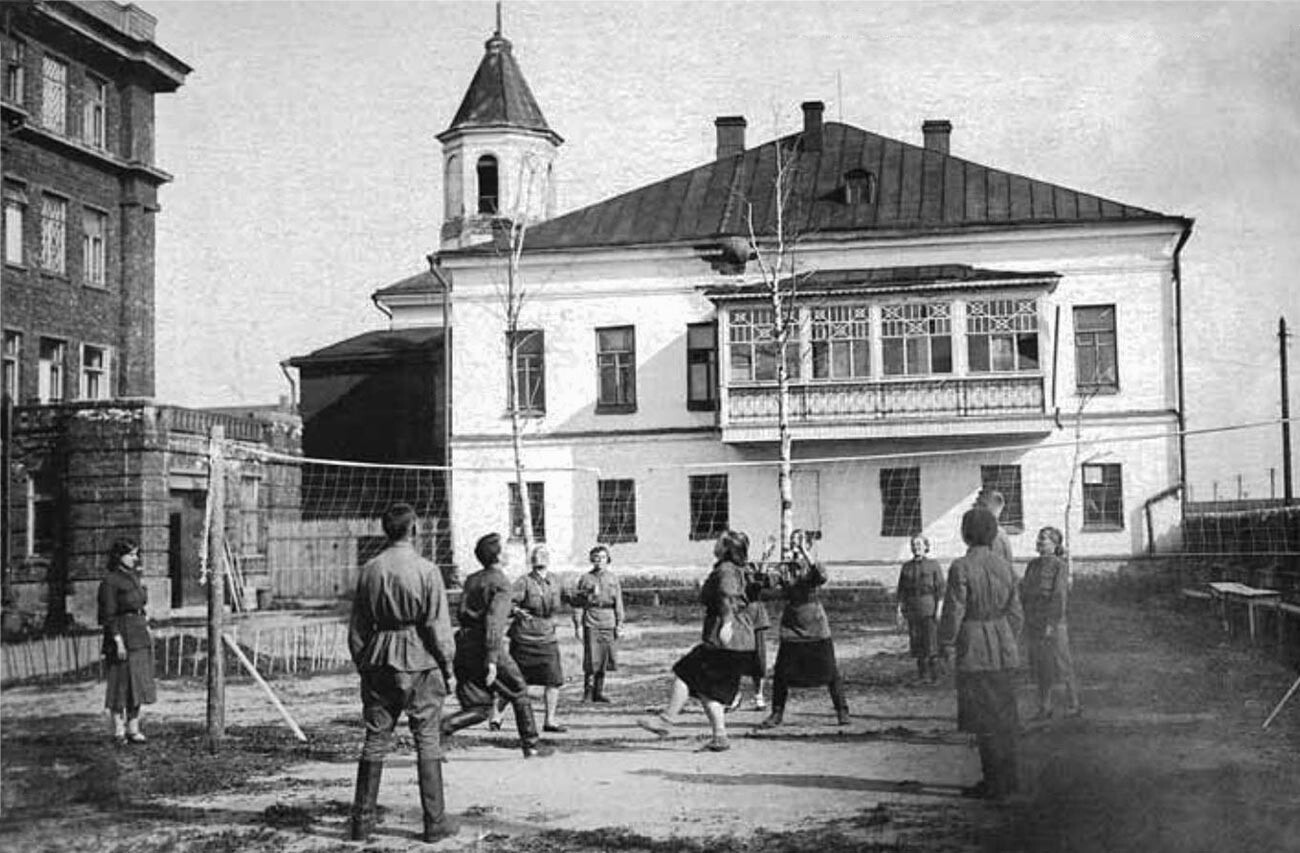 People playing volleyball in Arkhangelsk in 1943.

Such cruelty at the hands of the state can easily be explained by Soviet fears that the women could of course have become informants and spies. Cases did, after all, exist, according to journalist Olga Golubtsova. The English at one point recruited eight women, getting them to sign papers claiming they worked for British intelligence. One of them – Antonina Trofimova – was compromised and subsequently pressured by the Soviets to give up the remaining seven. All were sent off to the labor camps for “treason of the motherland” – despite the fact that these were mostly just women trying to make ends meet (rations in Arkhangelsk at the time were not much better than in blockade-era Leningrad), who had partly fallen for the promise of nice food and clothes, provided by the well-to-do Englishmen. And a few of these Soviet-British love affairs were based on genuine love; that did nothing to change their fate, however: the law on marriages with foreigners was the same for everyone. 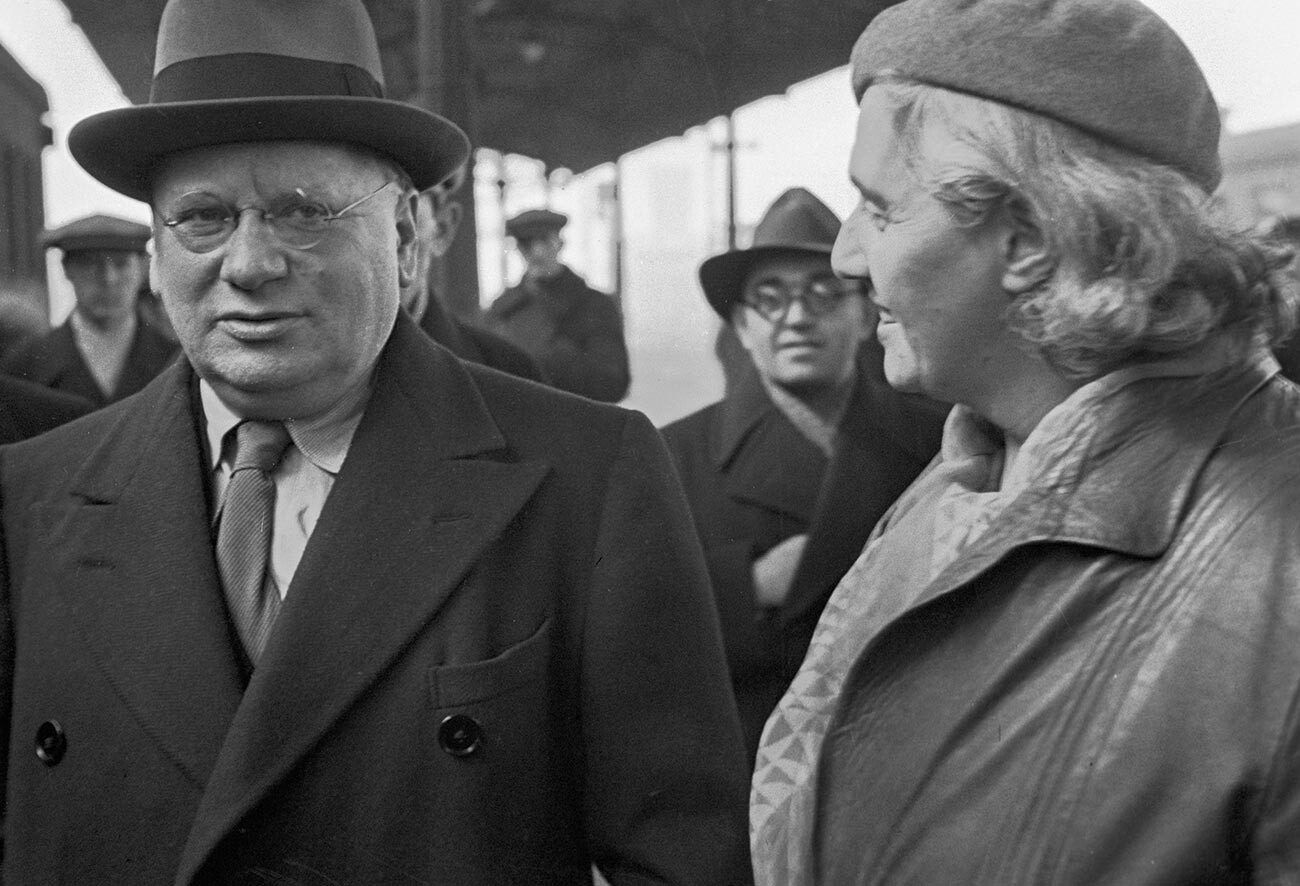 Soviet rule outlawed church weddings and traditional ceremonies in 1917. Freedom in marital and sexual relations became the cultural norm. You couldn’t surprise anyone with international marriages – and there were plenty of famous couples: Sergey Yesenin and Isidora Duncan, Sergey Prokofyev and Carolina Codina, foreign minister Maksim Litvinov and Ivy Low and many others. However, by the end of the 1930s, the law regarding family had begun to intensify. Abortions were banned in 1936 and, with them, the divorce procedure was made more complex: it was now up to the courts to issue rulings, with both spouses having to show up and pay a 100-200 ruble tax, which was substantially raised in 1944 to 500-5,000 rubles – sums that the vast majority of the population simply did not have (the average annual salary in 1939 was around 4,000 rubles). If, in 1940, some 10-12,000 couples filed for divorce in Moscow, by 1945, the figure fell to just 679. 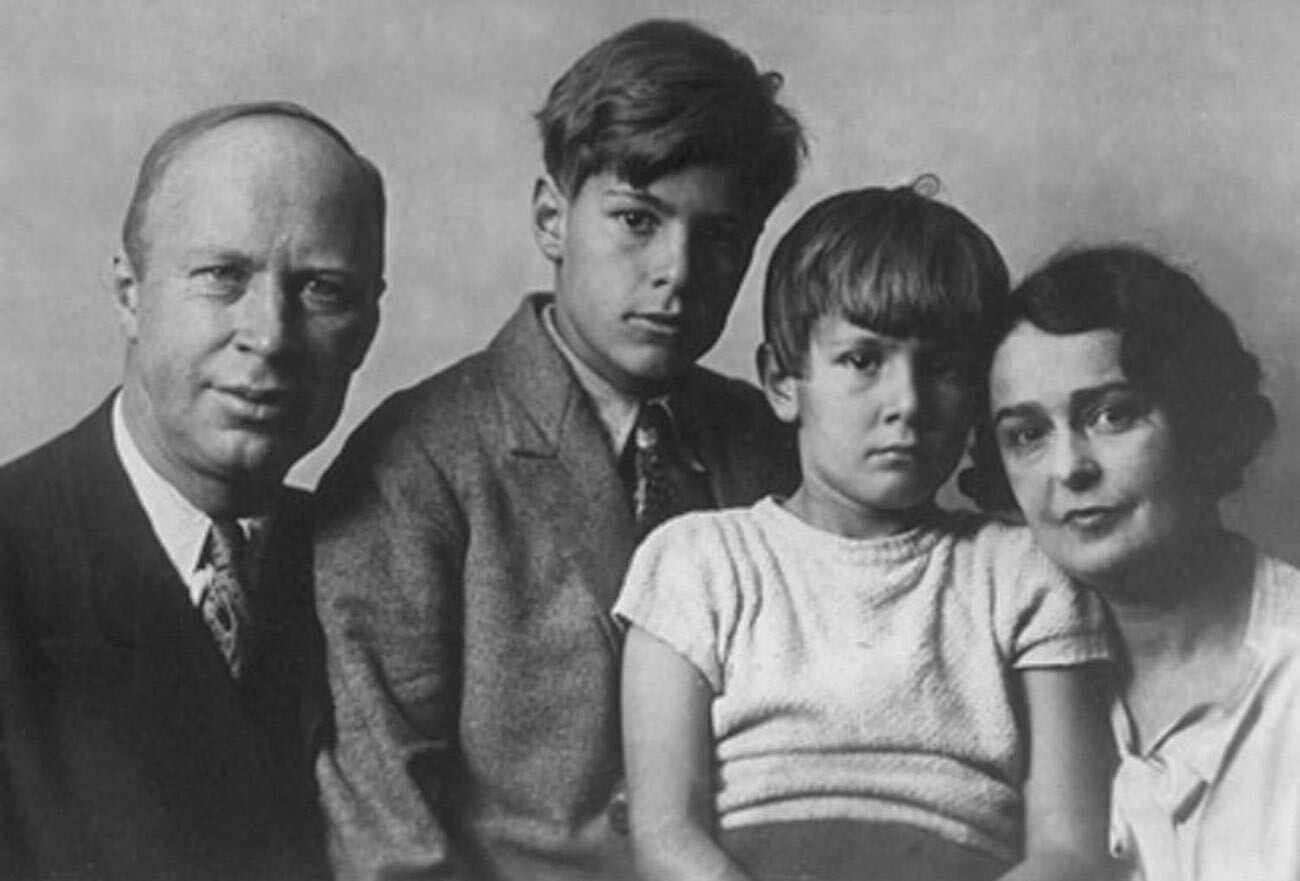 After the war, the country lost tens of millions of men and women of working age. During their time in Europe, some Soviet soldiers had started families. Soviet rule did not wish to busy itself with reuniting families, mostly because of the dangers posed by double citizenship. Adding to that attitude was the story with the 15 women. Thus, in 1947, another law was passed, which entirely prohibited marriages between Soviet and foreign citizens. The official justification went as follows: “Our women, who enter into marriage with foreign men, finding themselves living abroad, do not feel well and suffer discrimination.” Those who transgressed, faced punishment under Article 58 of the Soviet Criminal Code on the grounds of “anti-Soviet activity” – 10 years in prison, with property confiscation. The most prominent cases occurred immediately prior to and after the enactment of the law. One involved the son of the Chilean Ambassador to the USSR, who married 19-year-old Lidia Lesina in 1946. With the new law having come into force, the couple’s status had changed to illegal; moreover, the USSR had severed diplomatic relations with Chile. The spouses then moved to the hotel ‘National’ and barely left it for five straight years! In the end, they managed to escape to Chile. Sadly, Lesina’s husband subsequently suffered insanity.

Robert Tucker, who worked as translator at the U.S. embassy, married Evgeniya Pestretsova in 1946. When his contract expired, he found that his wife was not allowed to leave the country. They did not have to go into hiding, but Tucker ended up staying in the USSR, doing ad-hoc translation jobs for Canadian and Indian embassies. The couple only managed to leave the country after Stalin’s death. 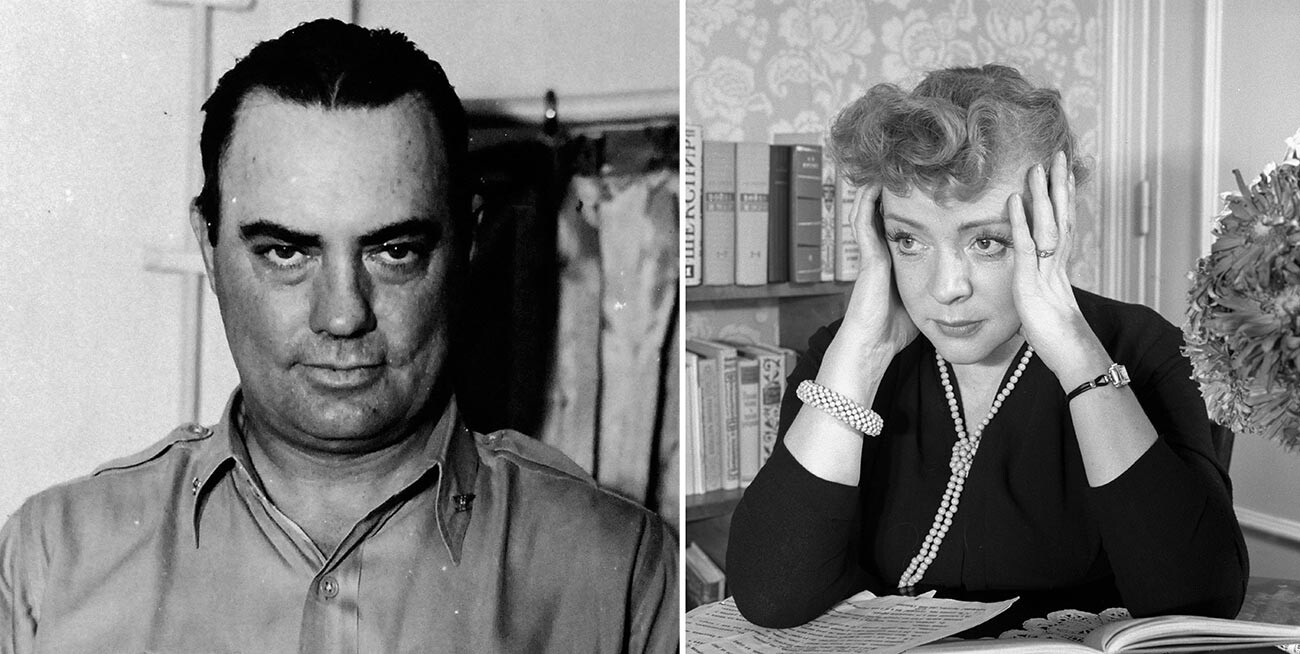 Escaping wasn’t always possible even for famous people. Actress Zoya Fedorova began an affair with the U.S. embassy’s military attache, Jackson Tate – a very dangerous man to be involved with. He was soon exiled from the country, but Fedorova had by then already become pregnant with his child. It was difficult to hide the truth: she received 25 years in labor camps, while her sister – who assisted her – received 10 years and died while incarcerated without ever seeing freedom again. Newborn Victoria had to be given to another sister to raise: the girl would only meet her mother at age nine, when Zoya was rehabilitated. She would see the father of her child only in 1976.

‘Looking for a husband as a means to move abroad’ 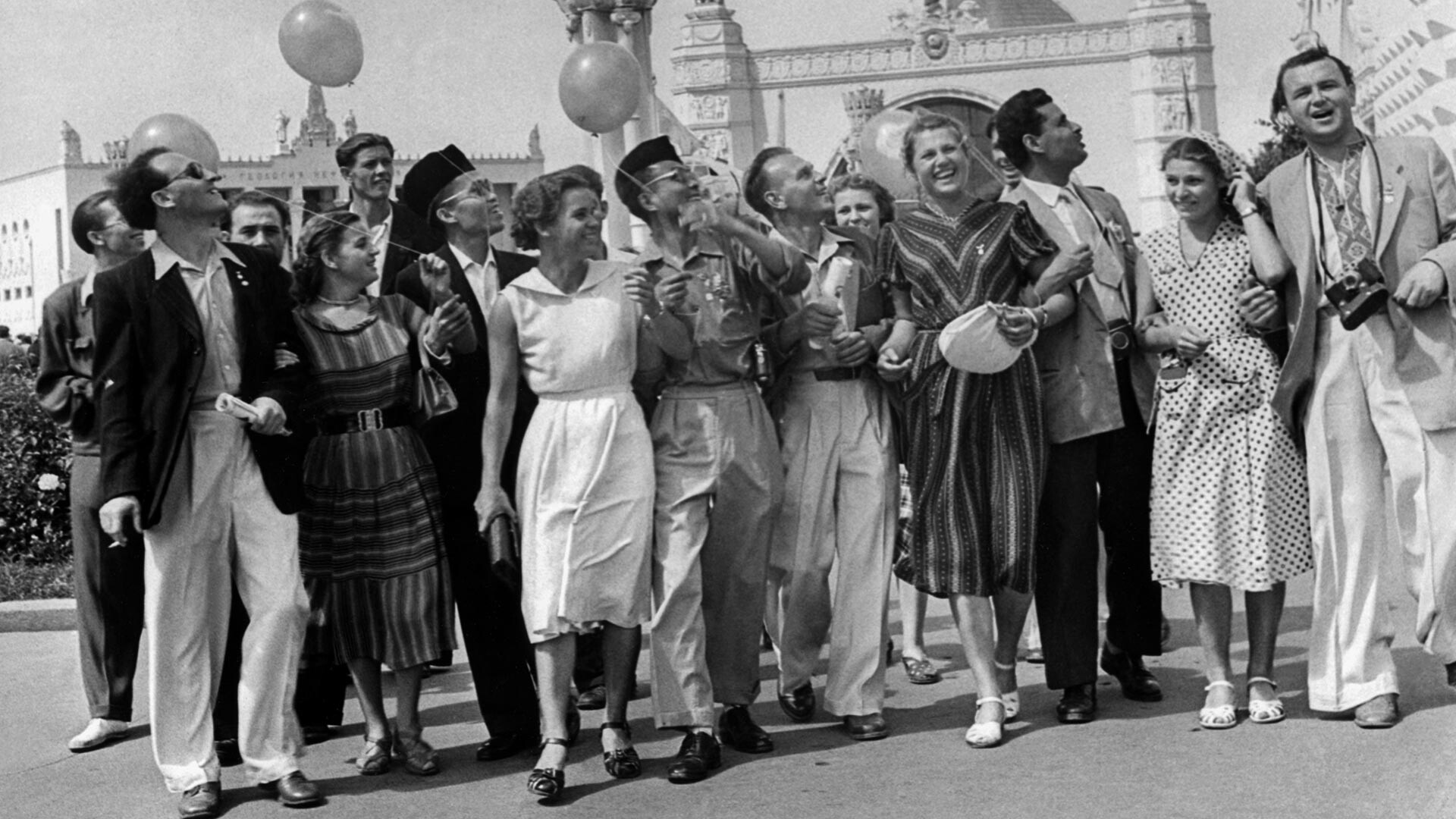 The delegates of the 6th World Festival of Youth and Students, Moscow, 1957

After the law was lifted in 1953, Soviet citizens no longer had to change their citizenship. The Ottepel’ (“thaw”) had arrived, seen as a positive sign in bilateral relations with the West. In 1957, The 6th World Festival of Youth and Students was held in Moscow. And, in 1960, the Peoples’ Friendship University opened its doors in the capital. However, in practice, marrying a foreigner still required a myriad of documents and written personality reviews, as well as going through multiple interviews with government and Communist Party officials. In short – any such relationships in the 1950s-60s automatically made you a target of state surveillance. In some cases, the KGB could really crank up the pressure: there were expulsions from the Communist Party, firings and even forced relocation to other regions. Any “transgressions” of the sort were considered a “stain on the reputation of the Soviet citizen”.

Athlete Inga Artamonova met a Swedish athlete while competing in Sweden and, having returned to Moscow, the pair began a written correspondence. According to rumors, the KGB was in contact with Artamonova daily. And the agency also stuck to her wherever she went – sometimes waiting for her as she approached her home, simply to remind her what punishment awaited her and her relatives if she persisted. The Soviet athlete eventually relented and cut her ties with the Swedish man. However, when she was just 29, she was killed by her own husband, Gennadiy Voronin – also an athlete. He stabbed her with a knife, suspecting infidelity. 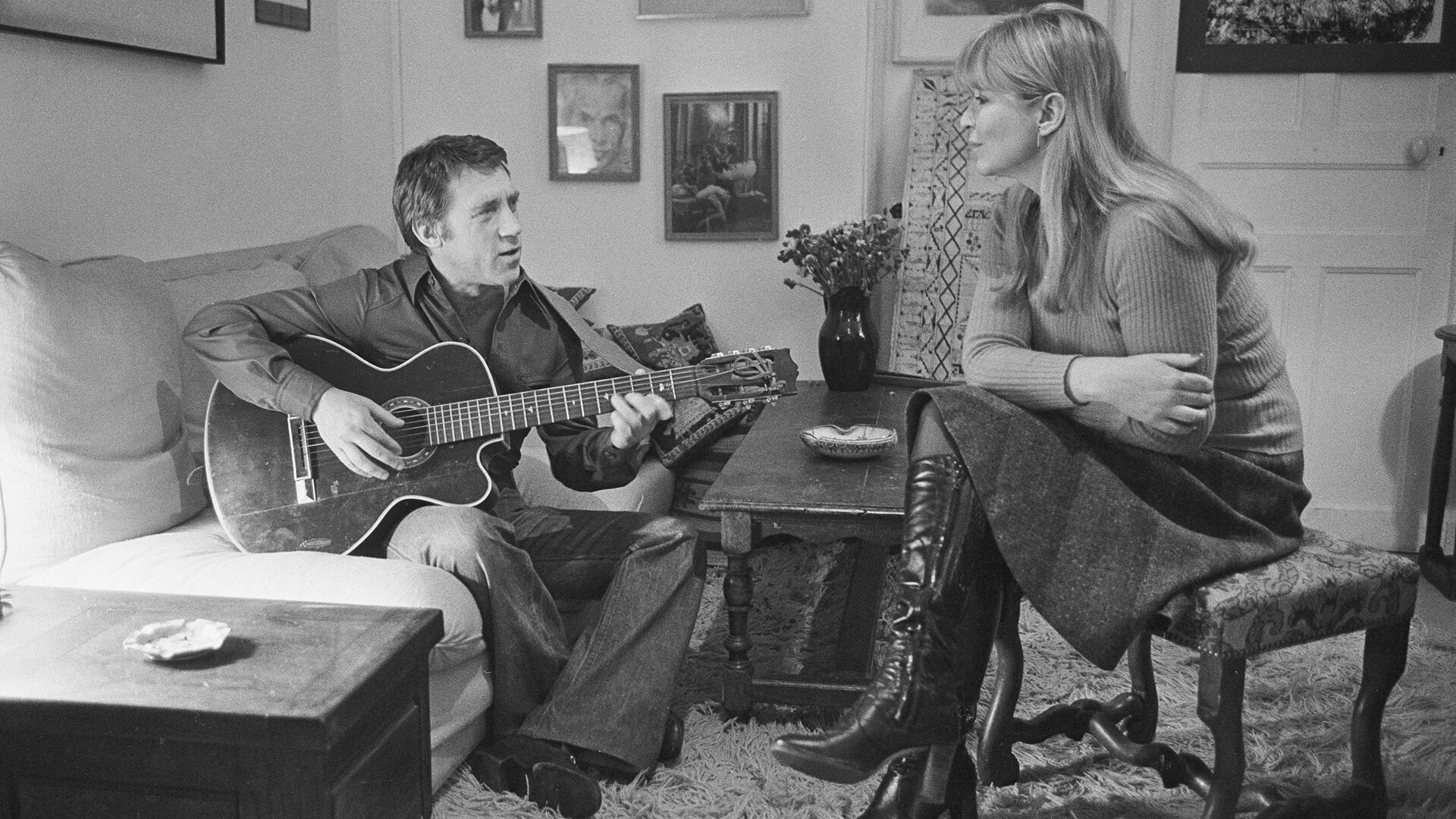 Escaping surveillance and bans was impossible even for Party higher-ups. Lyubov Brezhneva, who was the niece of General Secretary Leonid Brezhnev himself, met a German soldier by the name of Helmut in Moscow. For several months, the two were simply watched. Then, the threats began. At one point, her apartment was ransacked by operatives, just to send a message that searches could be performed at her home without her say. Her lover was then summoned for a meeting at the Ministry of Defense and asked to leave the country. Even family ties with Leonid Ilyich were no good. Legend has it that the General Secretary personally told his niece: “If I let you slide, the others will run.” This is understood to mean that many women in similarly privileged positions were eager to leave the country. The Motherland was, of course, against it.

After 1969, when the new “Code on marriage and family in the RSFSR” was signed, marrying foreigners became easier, although registrations of such marriages were only held at specific civil registration offices in big cities. Nevertheless, KGB surveillance of persons married to foreigners was on the decline. Marrying foreigners even became fashionable and so did the practice of moving abroad – predominantly Israel and the U.S. The practice became so commonplace, it became the subject of jokes: “Looking for a husband as a means to move abroad,” women quipped. Meanwhile, members of the culture and entertainment sphere saw such unions as a sort of chic attribute. Singer-songwriter Vladimir Vysotsky was married to French actress Marina Vladi (although her father was Russian), while poet Evgeny Evtushenko was married to Irish Jenn Butler, film director Andrey Konchalovsky was married to French Vivianne Gaudet and ‘Kino’ guitarist Yury Kasparian was married to American Joanne Stingray.