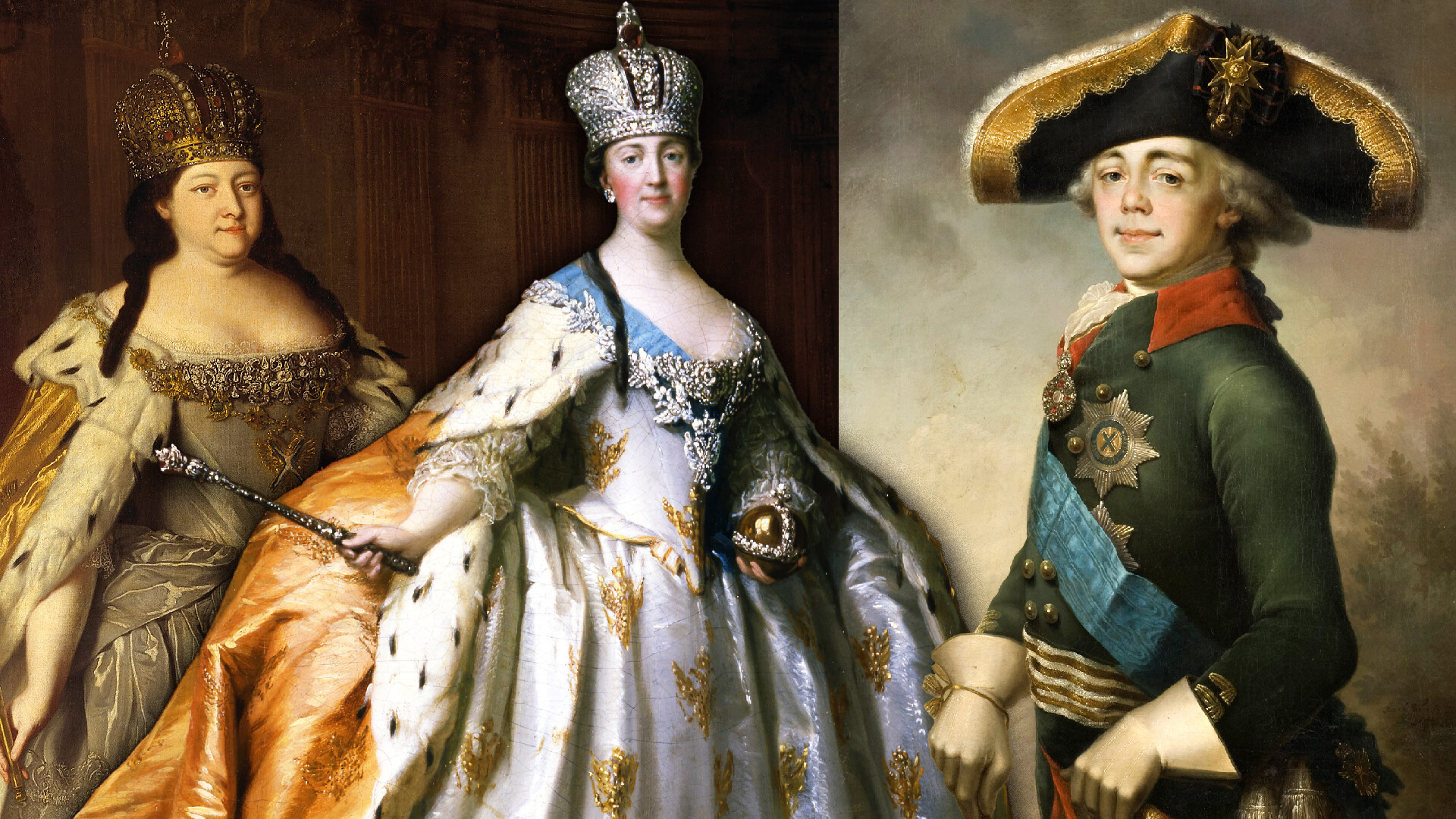 Russsia Beyond (Louis Caravaque / Tretyakov Gallery; Vigilius Eriksen/David Collection, Copenhagen; Vladimir Borovikovsky / Russian museum)
As part of the passage of state power from a deceased monarch to the throne’s heir, coronations were very important for the Russian Empire. The empire’s best tailors were called upon to create unique coronation costumes, which often were real works of art.

In a new style 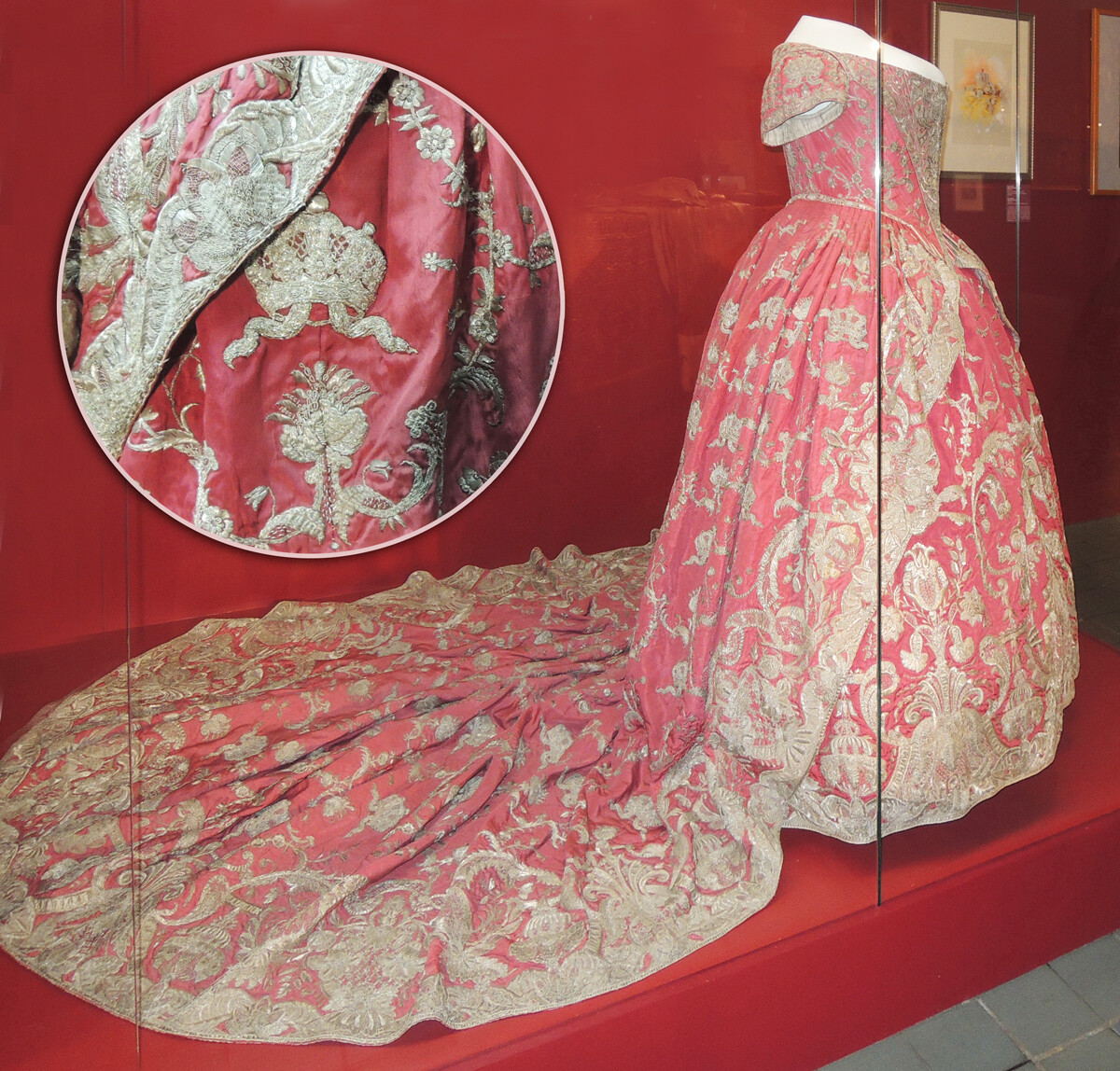 As second spouse of Peter the Great, Catherine I had her coronation in the Kremlin in May 1723. Preparations were done well in advance, with the ancient ceremony effectively reinvented to combine European and Russian traditions. To the beat of drums, the ringing of bells and the music of guards regiments, Peter and his wife proceeded from the Palace to the Cathedral of the Dormition. The Emperor wore a silk doublet, blue culottes embroidered with silver, and a hat with a feather. Catherine I's coronation gown of deep crimson, densely embroidered with silver, was made by Berlin craftsmen according to the Spanish fashion.

Interestingly, the dress was brought to Moscow still in pieces and then adjusted to fit her figure and sewn together on the spot. Moreover, it was done in a hurry: Three days before the coronation, the Empress’ outfit was still not ready. Five ladies-in-waiting carried the sumptuous dress. During the ceremony, Peter the Great personally covered Catherine’s shoulders with a robe of gold-inwoven brocade, embroidered with imperial coats of arms and lined with ermine, and then set the crown on her head. 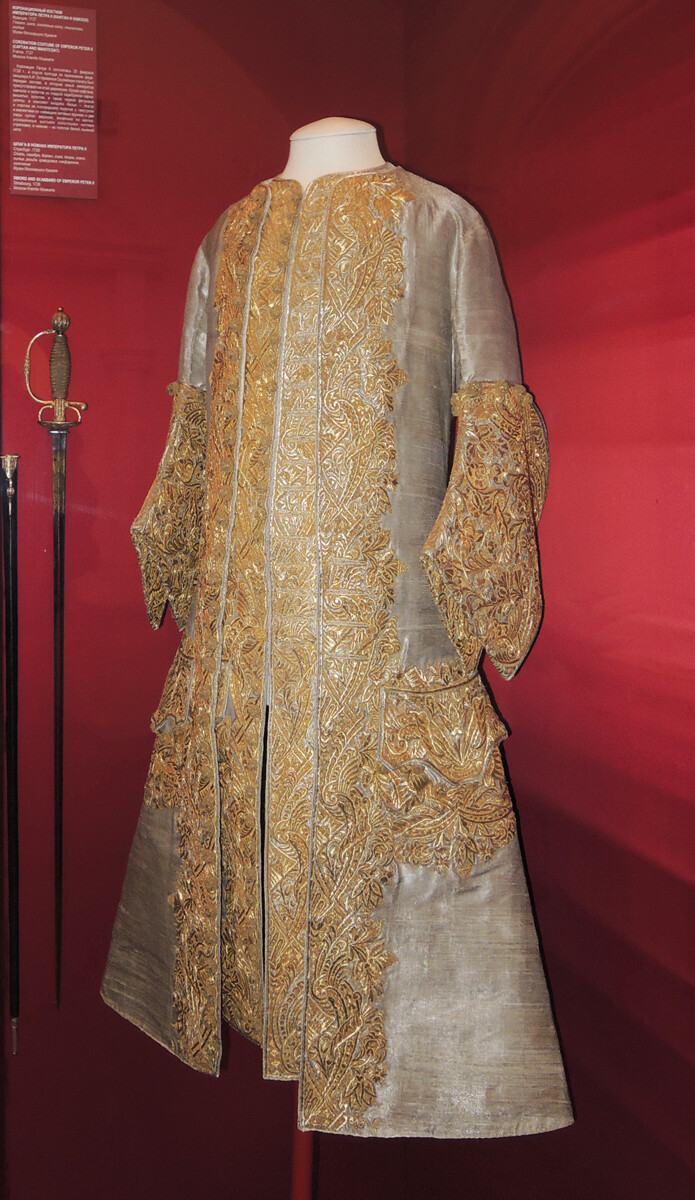 It is unlikely that 11-year-old Peter II was worried about fashion and style when he ascended to the throne. After all, French craftsmen had made a caftan, doublet and culottes from sparkling silver-colored silk brocade that was embroidered with gold for the successor to Catherine I. 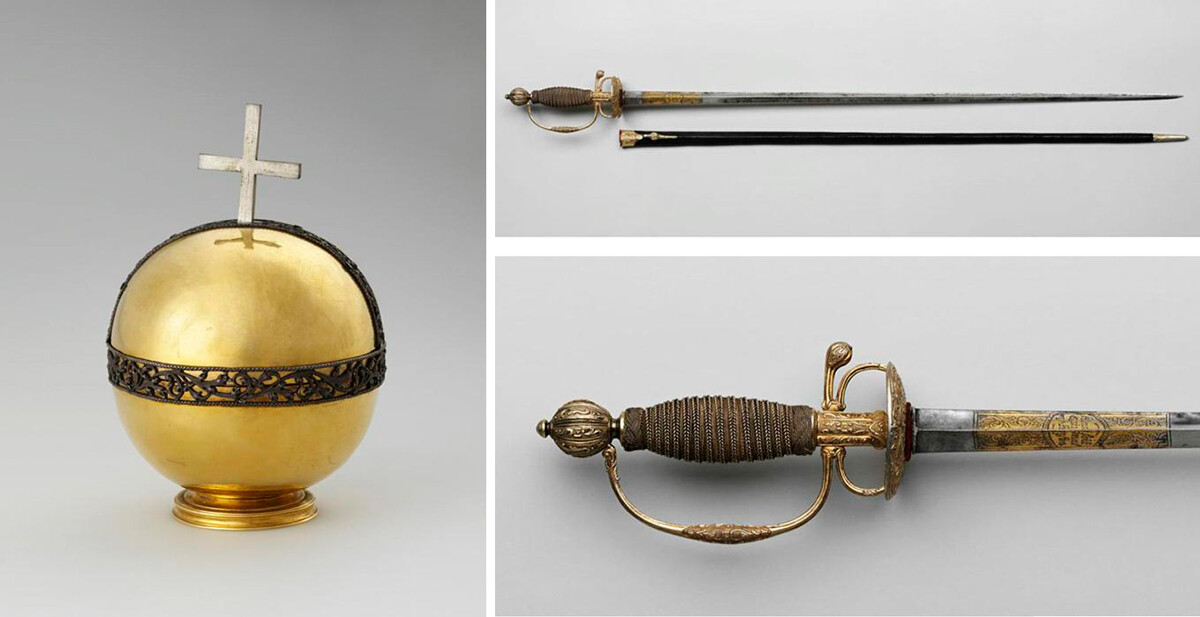 The orb and the sword of Peter II

This ceremonial attire, lit by candlelight in the Cathedral of the Dormition, must have looked quite stunning. It was decided to use the gown that had belonged to Peter the Great’s wife, but a new crown, studded with diamonds, pearls, sapphires and emeralds, and a new golden orb, were made for the young Tsar.

Brocade for the Empress 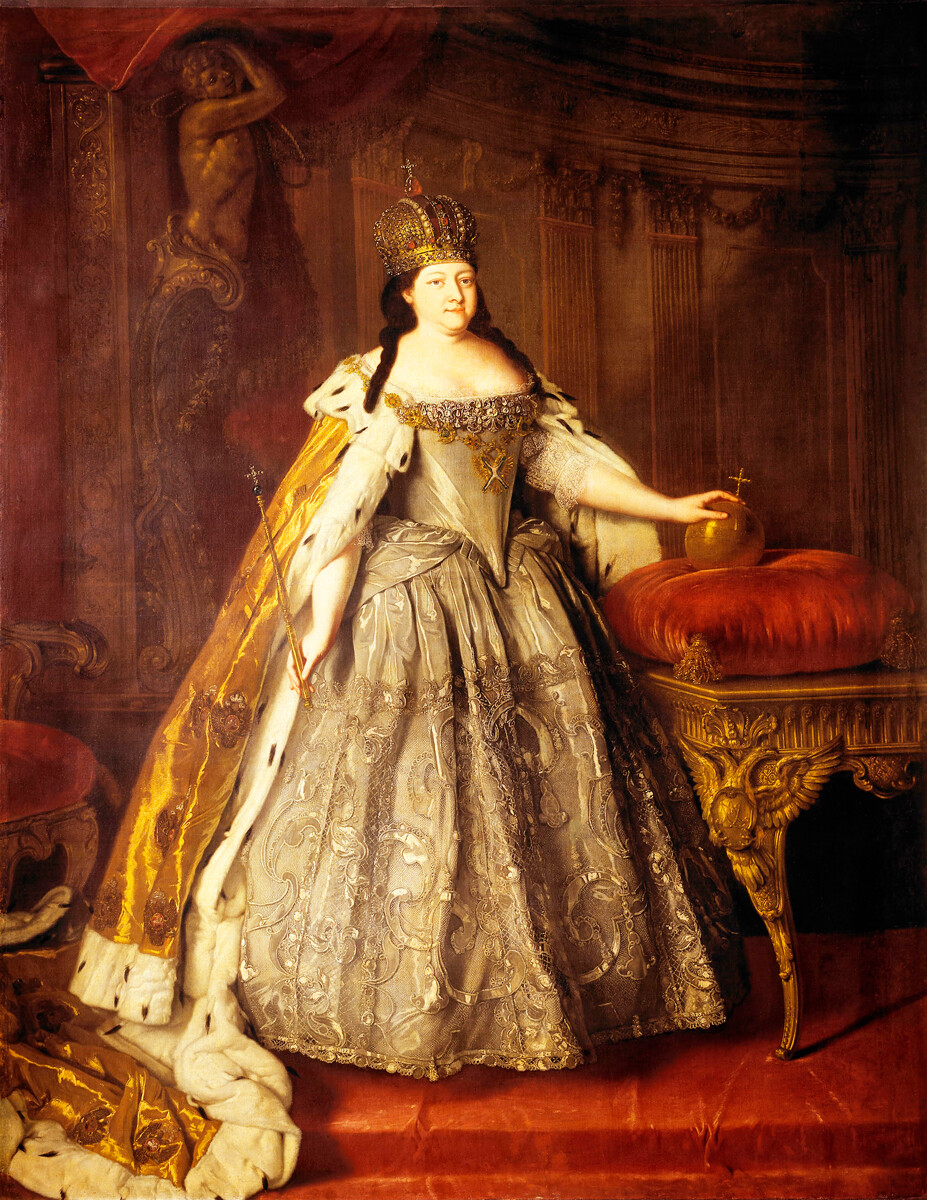 The preparations for the coronation of Empress Anna were done in haste. Following the sudden death of Peter II, Peter the Great's niece was summoned to Moscow from Courland. In February 1730, the heiress to the throne arrived in Russia and, in late April, Archbishop Feofan Prokopovich placed the precious crown adorned with numerous diamonds, rubies and tourmalines on Anna’s head.

In three months, the tailor she brought with her had made a dress from patterned Lyon brocade with a triangular train. She liked the fabric so much that she also ordered it for her subsequent dresses. The Empress added the chain of the Order of St. Andrew  to the outfit. 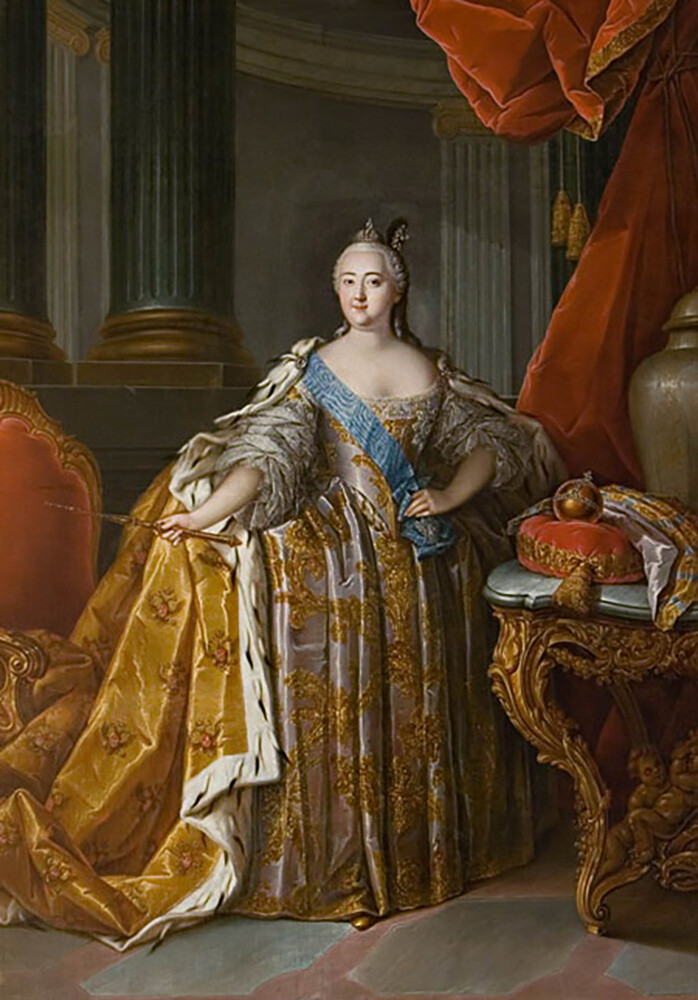 The Empress Elizabeth could be described as a "style icon". Historian Vasily Klyuchesky remarked ironically that when she died she left 15,000 dresses, two coffers of silk stockings, a pile of unpaid bills and an unfinished Winter Palace. Her infatuation with fashionable clothes was such that all the latest Paris fashions were always rushed to her so that she could wear them first. 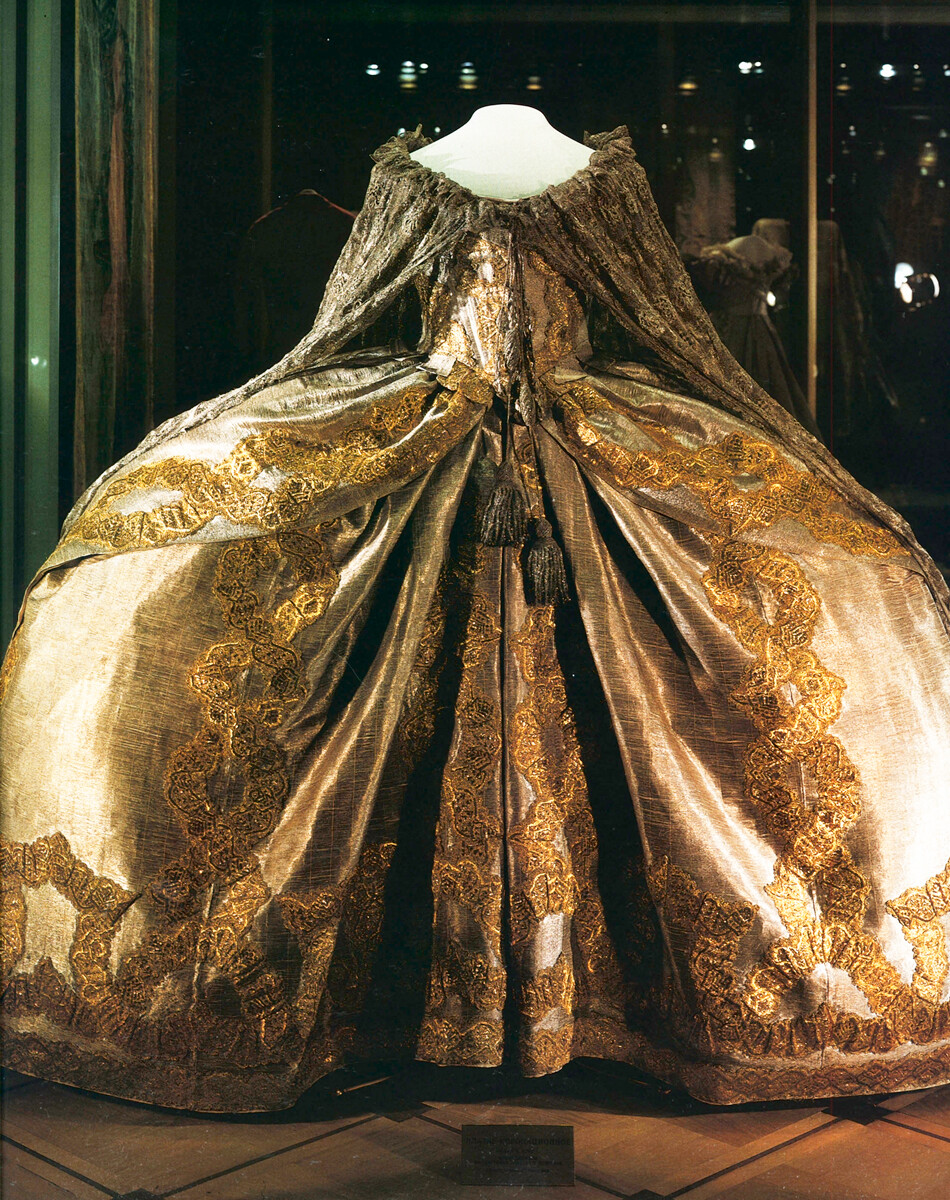 But in the run-up to her coronation she ordered all the fabrics for the ceremony to be exclusively Russian. This included her own gown: She received the Imperial regalia in a dress of silver-colored silk brocade embroidered with gold lace. The Empress set the fashion for many years to come. After her reign, all coronation gowns were made of similar fabric. 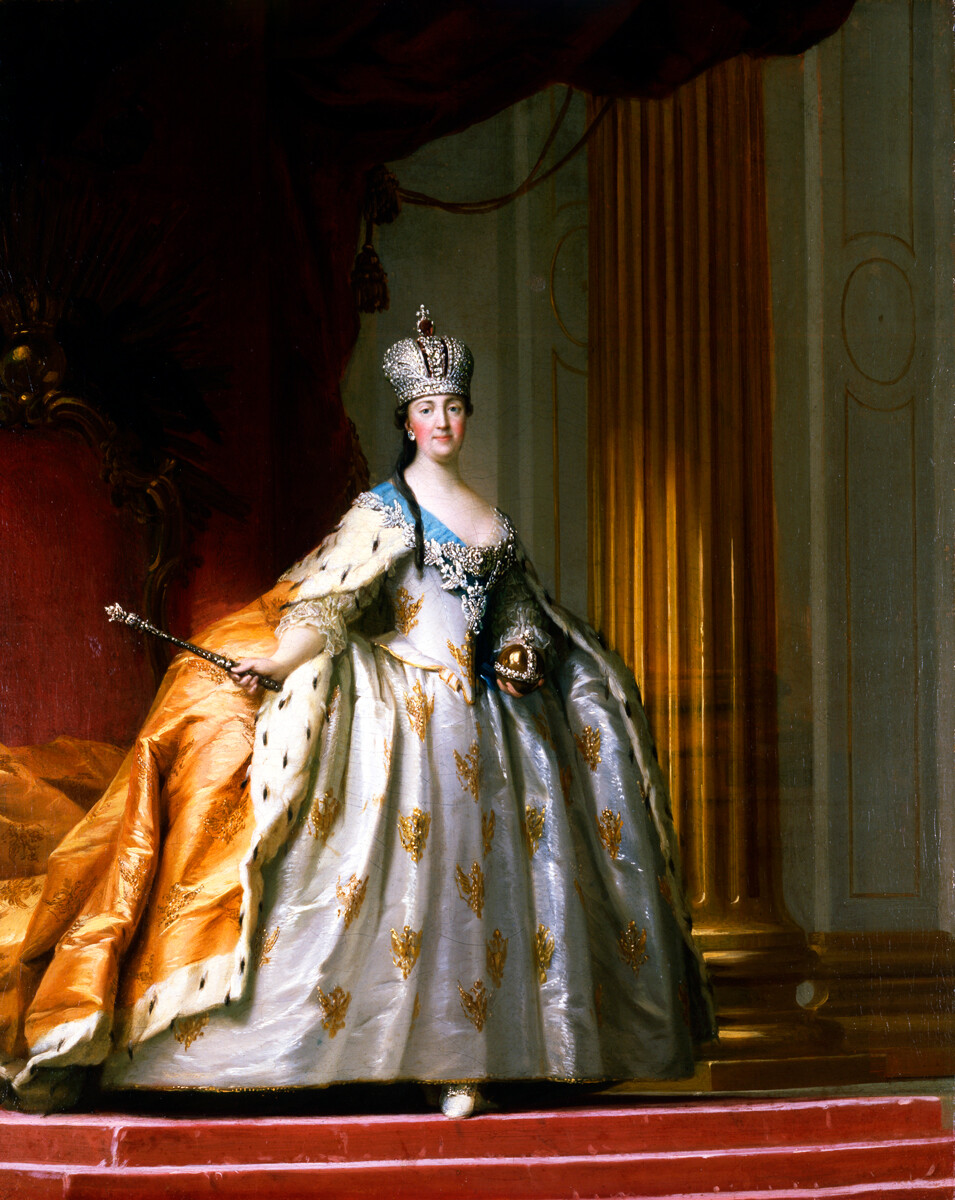 The most sumptuous and magnificent ceremony in history was probably that of Catherine the Great, who appeared in a brocade gown embroidered with two-headed eagles and embellished with the finest Flemish lace. 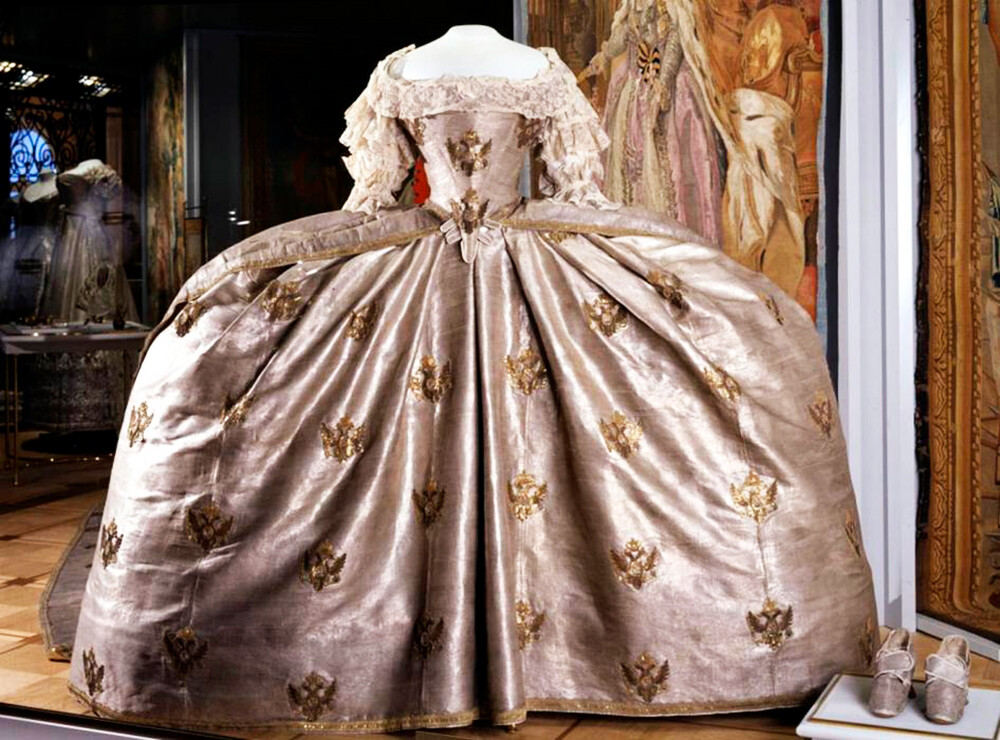 Coronation dress of Catherine the Great

No one before or since has had a coronation gown with so much symbolism emphasizing the majesty of the Russian throne. 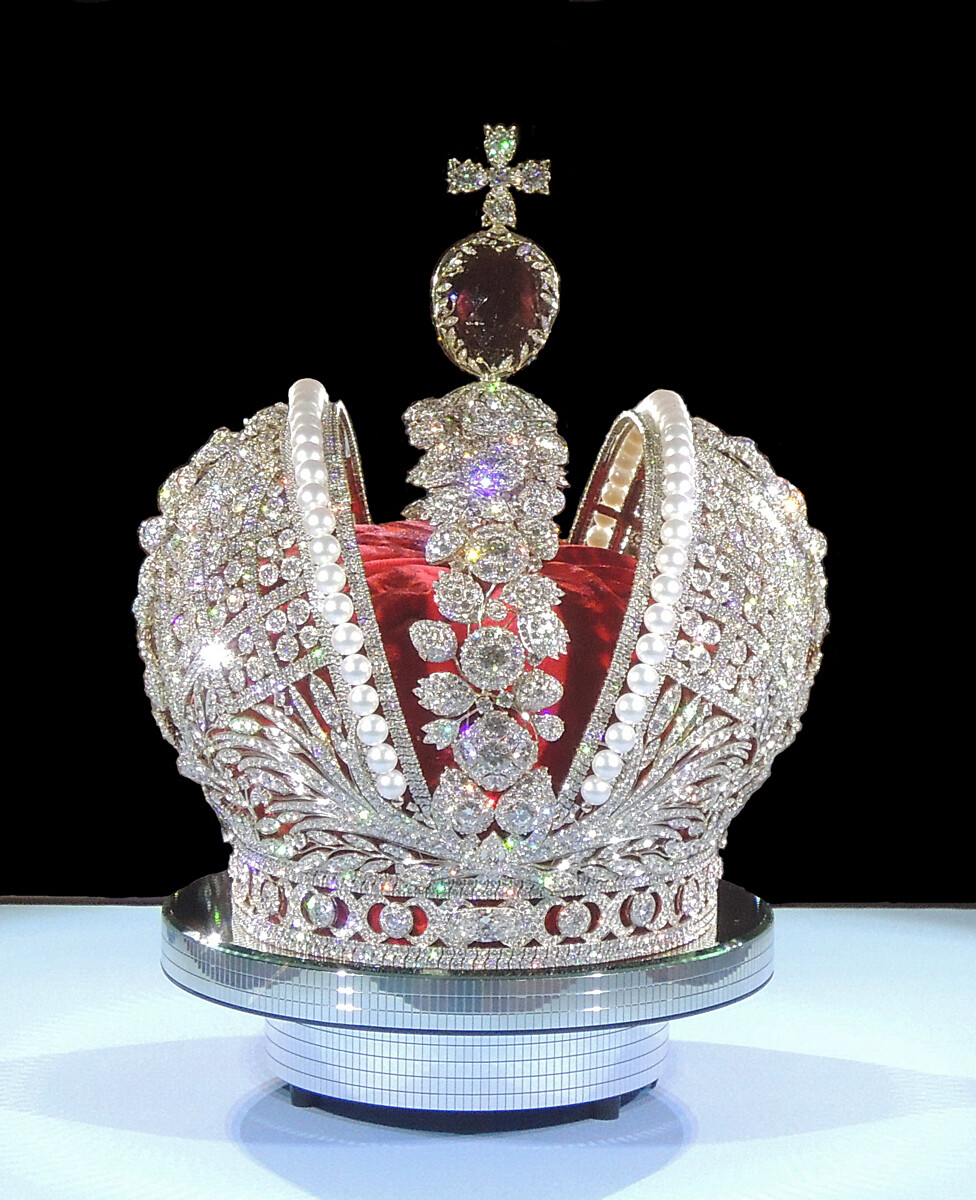 A copy of the Great Imperial Crown

Matching the costume were the Imperial regalia that Court jewelers had made specially for Catherine: The crown, orb and scepter were used at all subsequent coronations.

Honor of the regiment

Not only the Empresses but the Tsars also set a distinctive coronation fashion. For instance, Paul I decided to make the ceremony even more symbolic and chose the uniform of the Preobrazhensky Life Guards Regiment. The austere green woolen uniform with a collar lined with crimson velvet was decorated with two stars - the Order of St. Andrew and the Order of St. Alexander Nevsky. In the course of the ceremony, a long-sleeved velvet tunic was placed on top of Paul I's military caftan in the manner of the Byzantine emperors. During Easter 1797, it was not just the Emperor who was crowned, but also his consort. This was Russia’s first double coronation. All successors to the throne henceforth chose a military uniform for the ceremony. 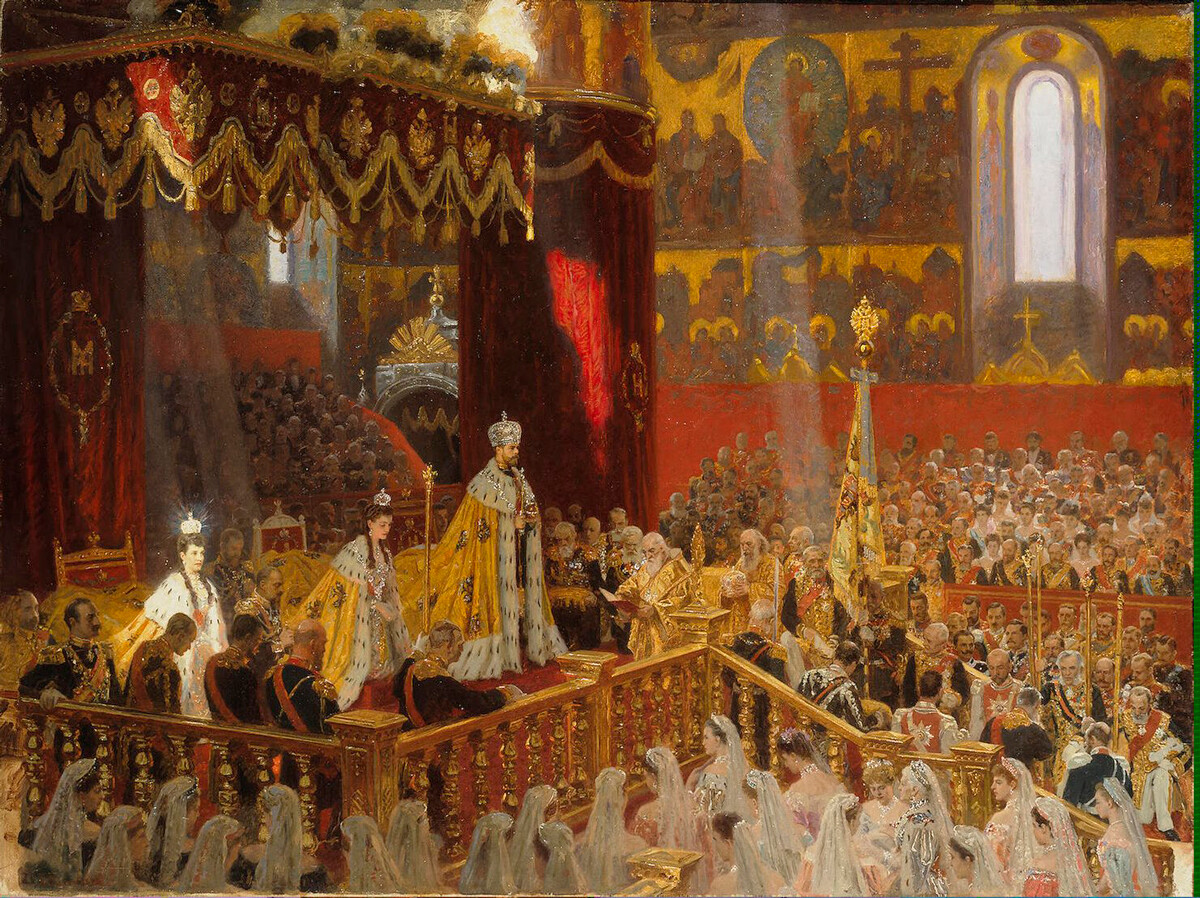 Under Nicholas II it was decided to reform court dress: Ladies had to be decked out in the Russian style and men in parade uniform. The same principles applied to the coronation ceremony. So when preparations were launched for Nicholas II's accession, work began in earnest. A Russian-style gown of heavy silver brocade manufactured at the Sapozhnikov brothers' factory was made for Empress Alexandra.

The fabric was initially sent for cutting to the Olga Bulbenkova workshop in St. Petersburg, after which it was dispatched to Moscow's Ivanovsky Convent to be embroidered with silver thread and pearls using designs based on the frescoes of the Novospassky Monastery. And only after that were the finished parts returned for assembly.

The end result was stunning in every sense of the word. For all its incredible beauty, the coronation dress was remarkably heavy, weighing in at 10 kg, and additionally it was paired with an equally weighty ermine-lined gold brocade robe. In line with tradition, Nicholas II himself attended the ceremony in the uniform of a  Preobrazhensky Regiment colonel that was made in the workshop of Nikolai Nordenstrom, the main supplier of military uniforms to several generations of the Russian Imperial family.