What did the Romanovs' wedding dresses look like? (PHOTOS)

History
Anna Sorokina
The last empress broke a centuries-old tradition of the Romanov royal family, and many of her contemporaries believed this was a tragic omen. 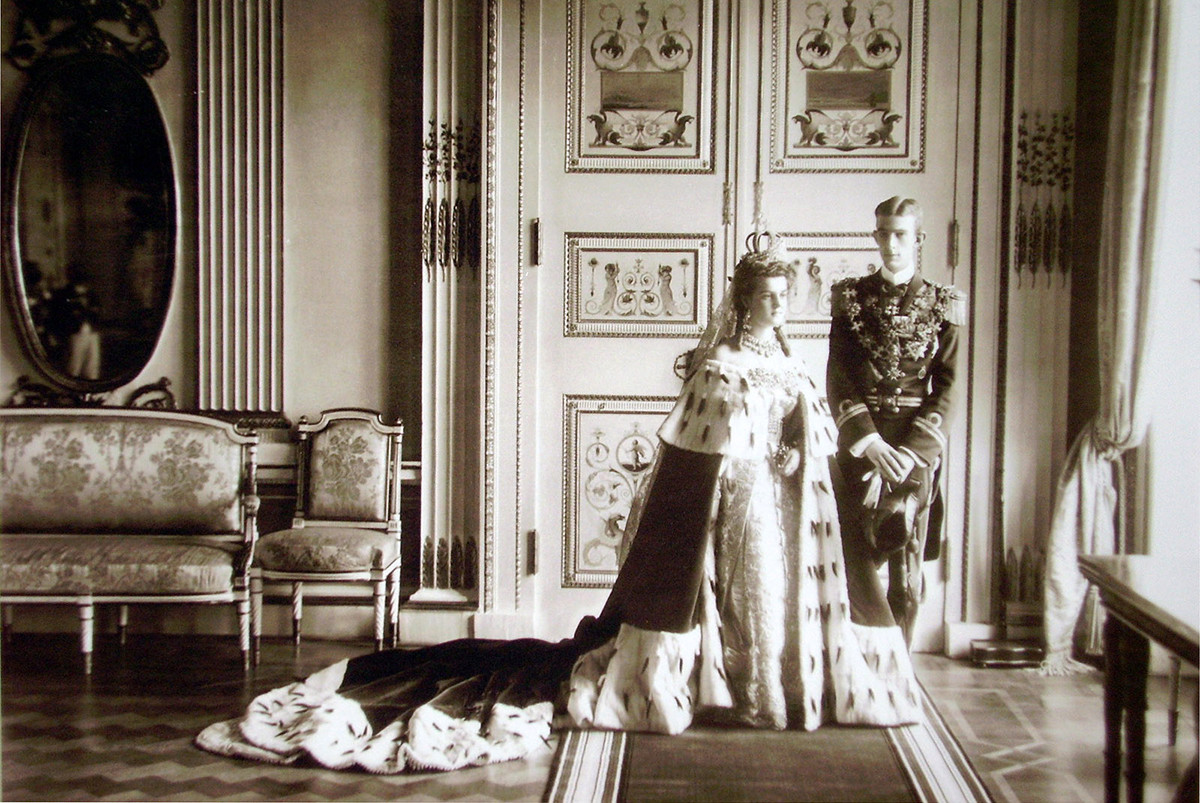 The wedding of the Grand Duchess Maria Pavlovna, the granddaughter of Alexander II, and Prince Wilhelm, Duke of Södermanland, a Swedish and Norwegian prince. 1908.

At an early age, a future husband would be selected for young women in the royal family. The grooms were selected from an assortment of grand dukes and princes in Russia and abroad, and their weddings were a matter of state importance. Every element of the ceremony was regulated down to the tiniest detail, and the bride's look was one of the most widely discussed matters in society at the time. 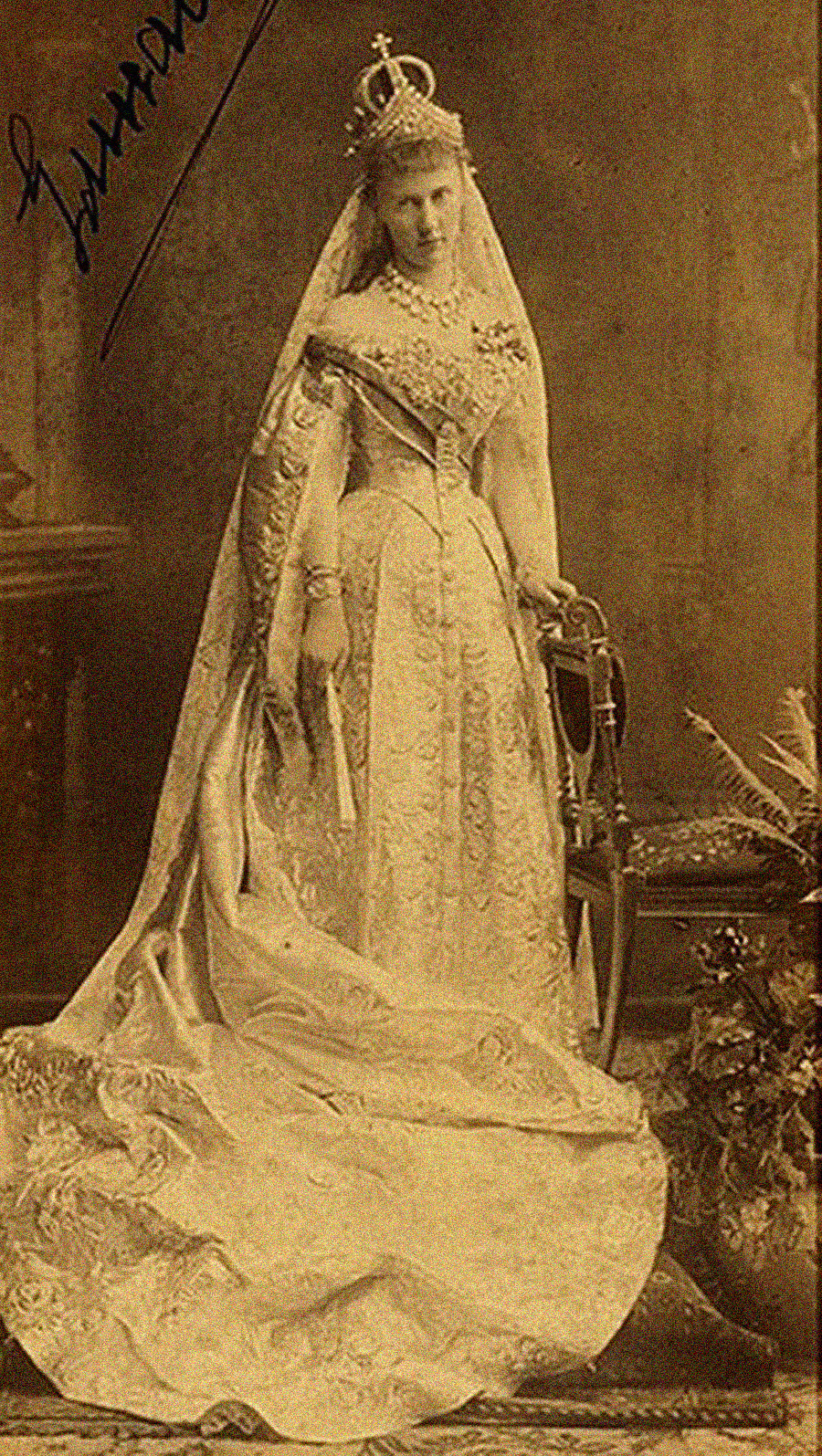 Grand Duchess Elizabeth Mavrikievna, granddaughter of Nicholas I, in the wedding dress, 1884.

The requirements were strictest for brides in the “first tier” of the royal family, i.e. those who might ascend to the throne one day. The ceremony itself was a major event in which even the most minor hiccup could be seen as a bad omen. A great deal of importance was also attached to the wedding dress. 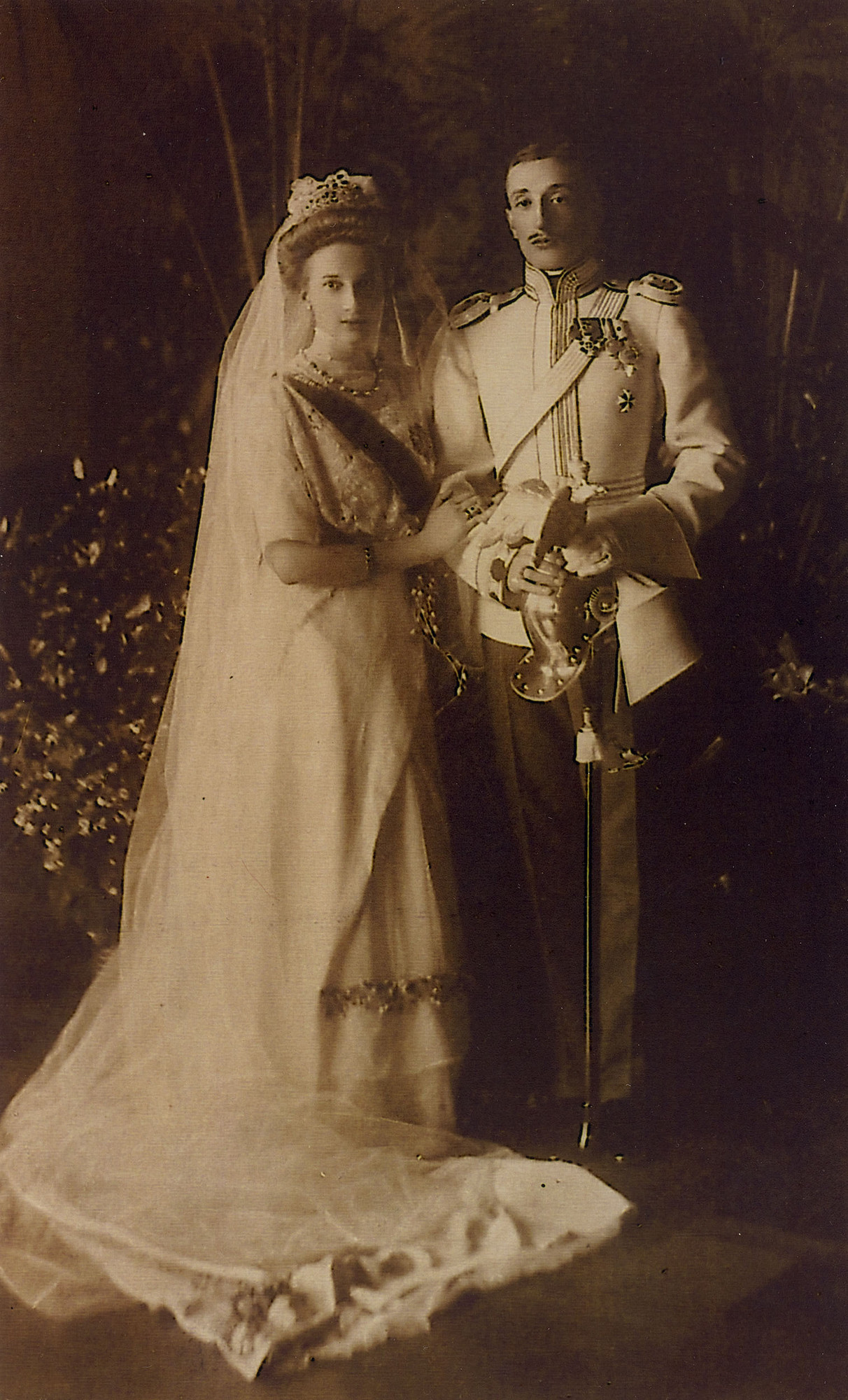 A wedding photo of the Georgian Prince Konstantine Bagration of Mukhrani and Princess Tatiana Constantinovna.

The “wedding dress code” was set by Emperor Nicholas I in 1834, and it applied not only to the main participants in the ceremony, but to the guests as well. The design of the wedding dresses was the same, but certain adjustments to the style, embroidery and decoration were allowed, taking into account fashion trends and the bride's taste. 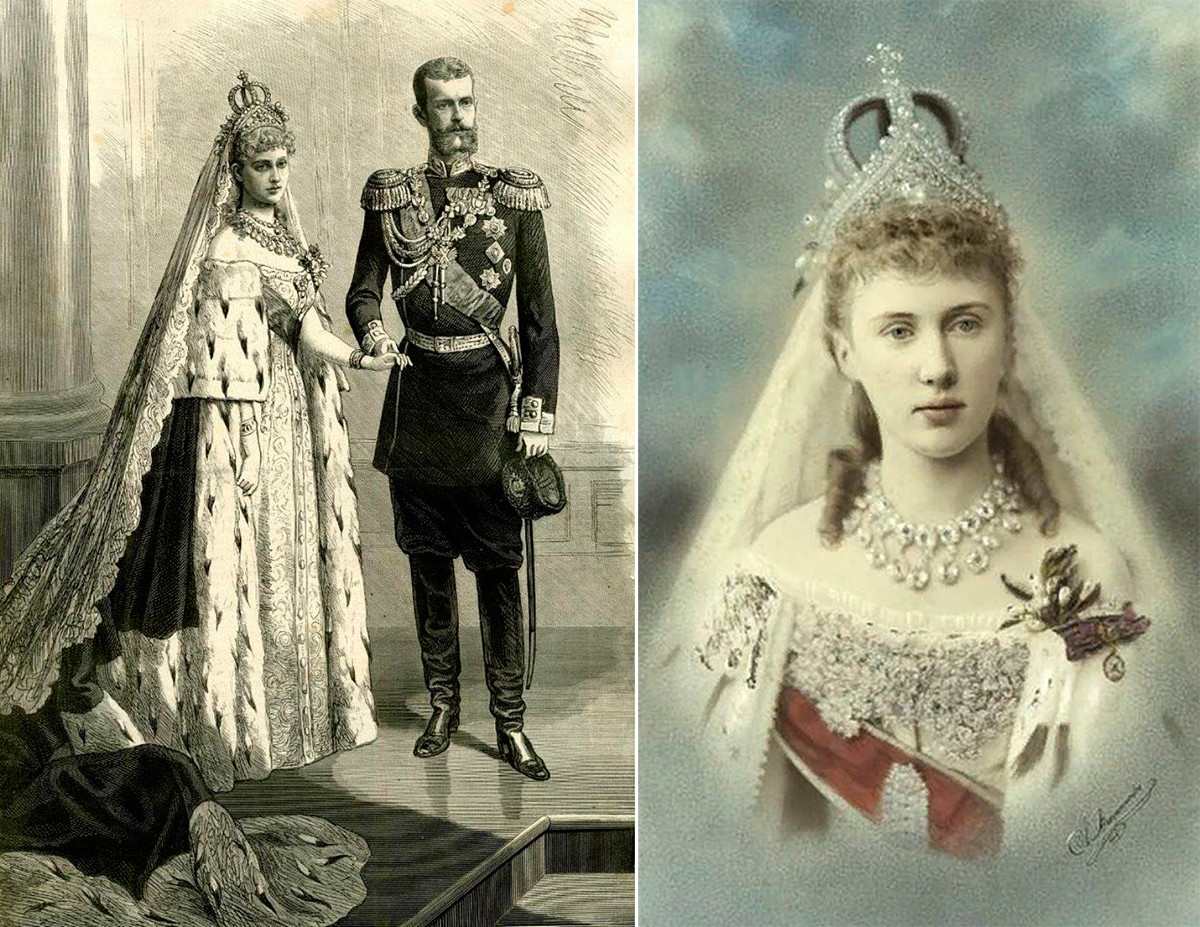 Princess Elisabeth in the wedding dress and the crown, 1884.

Wedding dresses were made of silver brocade and decorated with precious stones and stumpwork embroidery. Two mandatory accessories were a long train and an ermine mantle. It was the sort of outfit that was impossible to put on without the help of ladies-in-waiting.

During the church ceremony, the bride had to wear a wedding crown with a diamond tiara on top of it. There were also ceremonial earrings and a necklace. 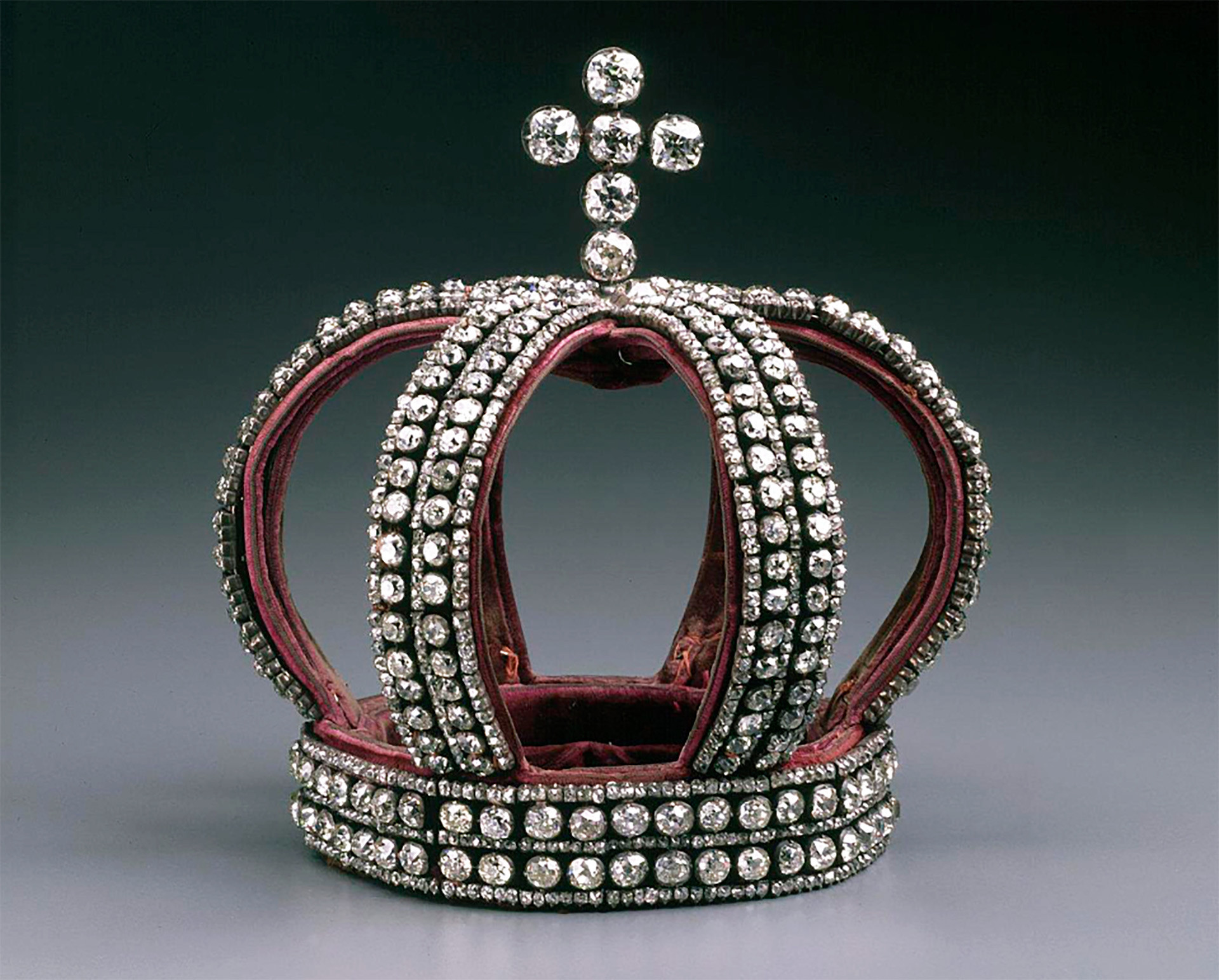 The wedding crown of Russia.

The Diamond Fund in Moscow has in its collection the only Romanov wedding diadem remaining in Russia today. It was worn by Empress Maria Feodorovna, the wife of Paul I, at her wedding, and then by other brides in the imperial family. 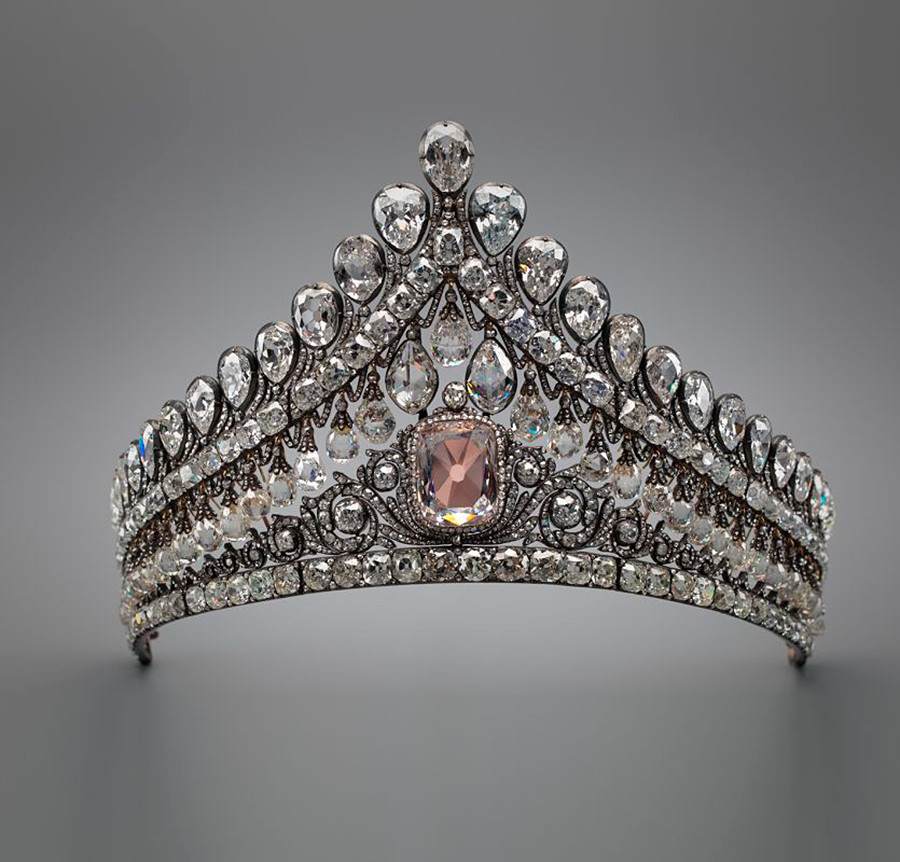 The diadem with the rose diamond.

The diadem has the form of a kokoshnik with a huge pink diamond in the center. In total, the diadem contains 175 large Indian diamonds and more than 1,200 small round-cut diamonds. The central row is decorated with large free-hanging diamonds in the form of drops. 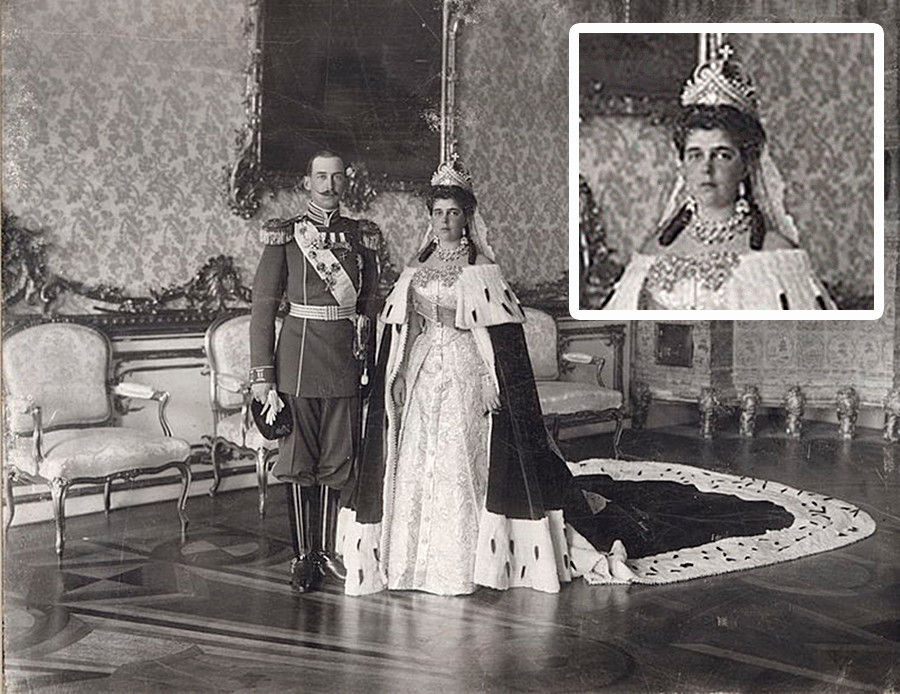 Tsarskoye Selo (Russia), Grand Duchess Elena Vladimirovna of Russia and Prince Nicholas of Greece and Denmark on their wedding day in the Portrait Hall of the Catherine Palace.

Brides' jewelry could either come from family heirlooms or be made specially for the occasion. For example, for her wedding to Prince Nicholas of Greece, Grand Duchess Elena Vladimirovna, granddaughter of Emperor Alexander II and cousin of Nicholas II, wore a Cartier diamond headdress and a diamond bow-shaped corsage decoration. 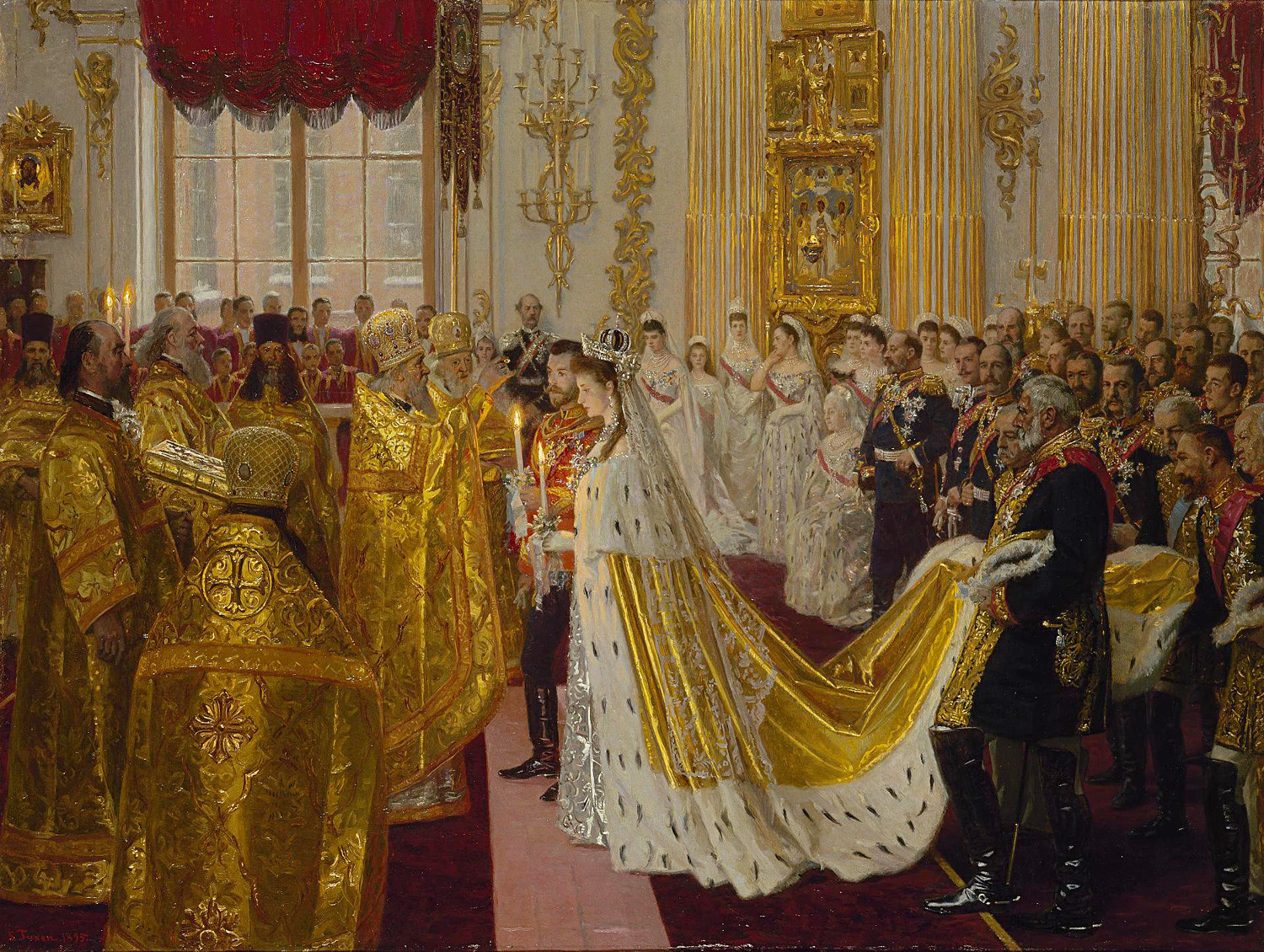 The wedding of Nicholas II and Alexandra Feodorovna.

In total, a royal wedding outfit weighed 25-30 kg. Just standing still in it all day was a difficult task, let alone moving around! Sometimes brides would become so exhausted that they had to be carried around. 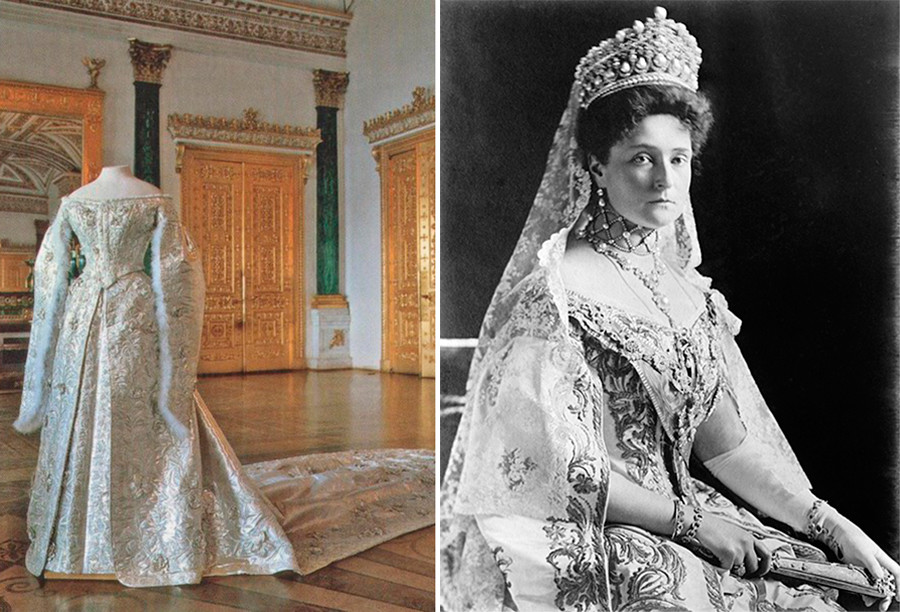 Alexandra Feodorovna and her wedding dress.

According to tradition, brides in the Romanov family donated their wedding dresses to the church afterwards. However, Alexandra Feodorovna, the last empress of Russia, wife of Nicholas II, decided to keep hers. That is why her wedding dress has survived to this day (you can see it at an exhibition in the Hermitage). Many people at the court did not approve of the empress's decision and were convinced that her rejection of a centuries-old tradition would bring bad luck to the family.