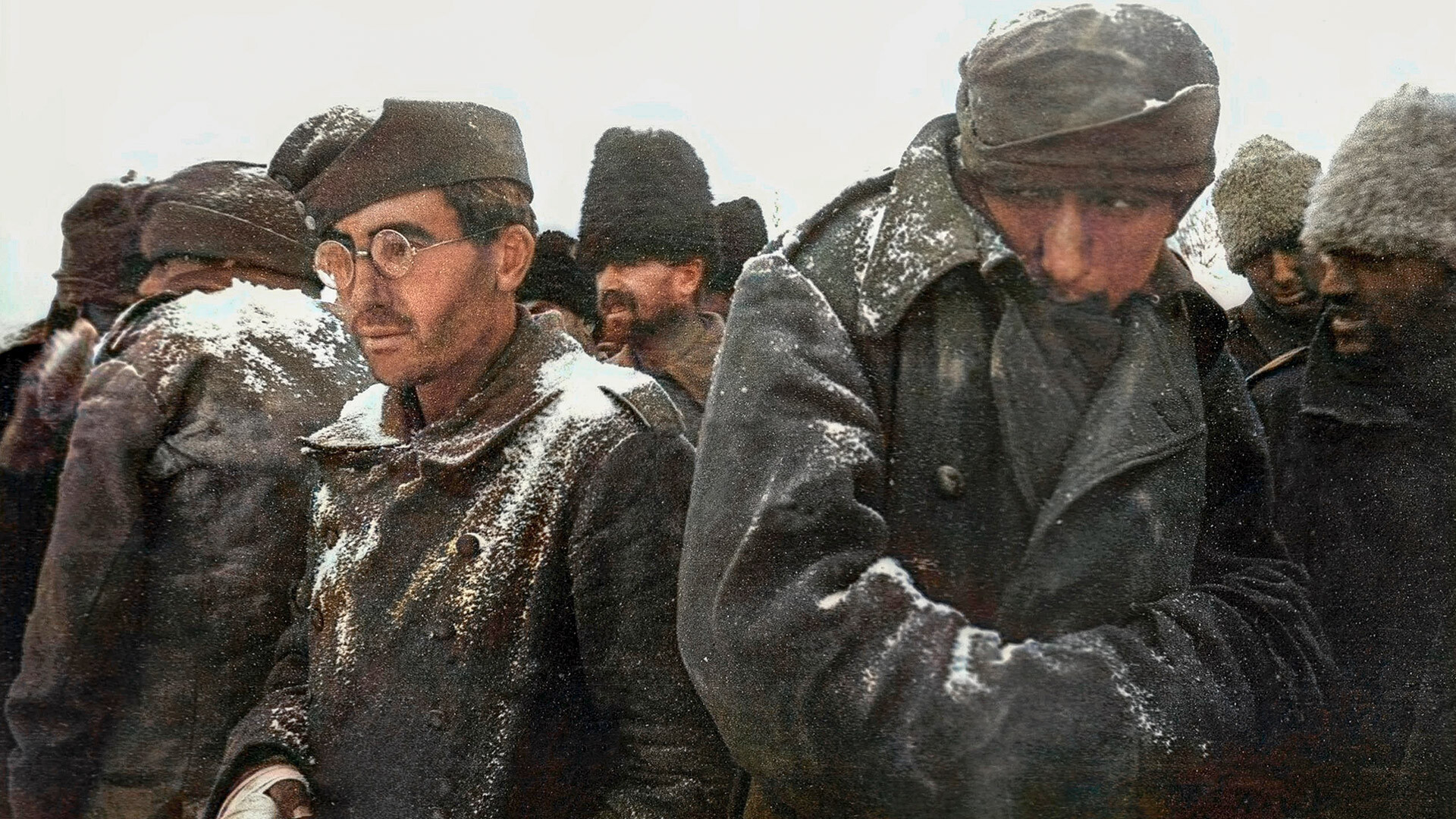 Sovfoto/Getty Images
At the end of December 1942, the last attempt to unblock the encircled grouping failed. Paulus' soldiers were doomed, but they still did not want to believe it.

On November 23, 1942, during the strategic offensive codenamed ‘Operation Uranus’, Soviet troops completed the encirclement of the 330,000-strong Wehrmacht grouping at Stalingrad. The entire 6th Army of Friedrich Paulus and also part of the forces of Hermann Hoth’s 4th Panzer Army found themselves in a “cauldron”.

“Stunned and confused, we kept staring at our staff maps on which bold red lines and arrows marked the direction of numerous enemy attacks, outflanking maneuvers and breakthrough sectors,” recalled Joachim Wieder, an officer with the 6th Army’s intelligence section. “For all our premonitions, we had never imagined a catastrophe of such proportions to be possible!” 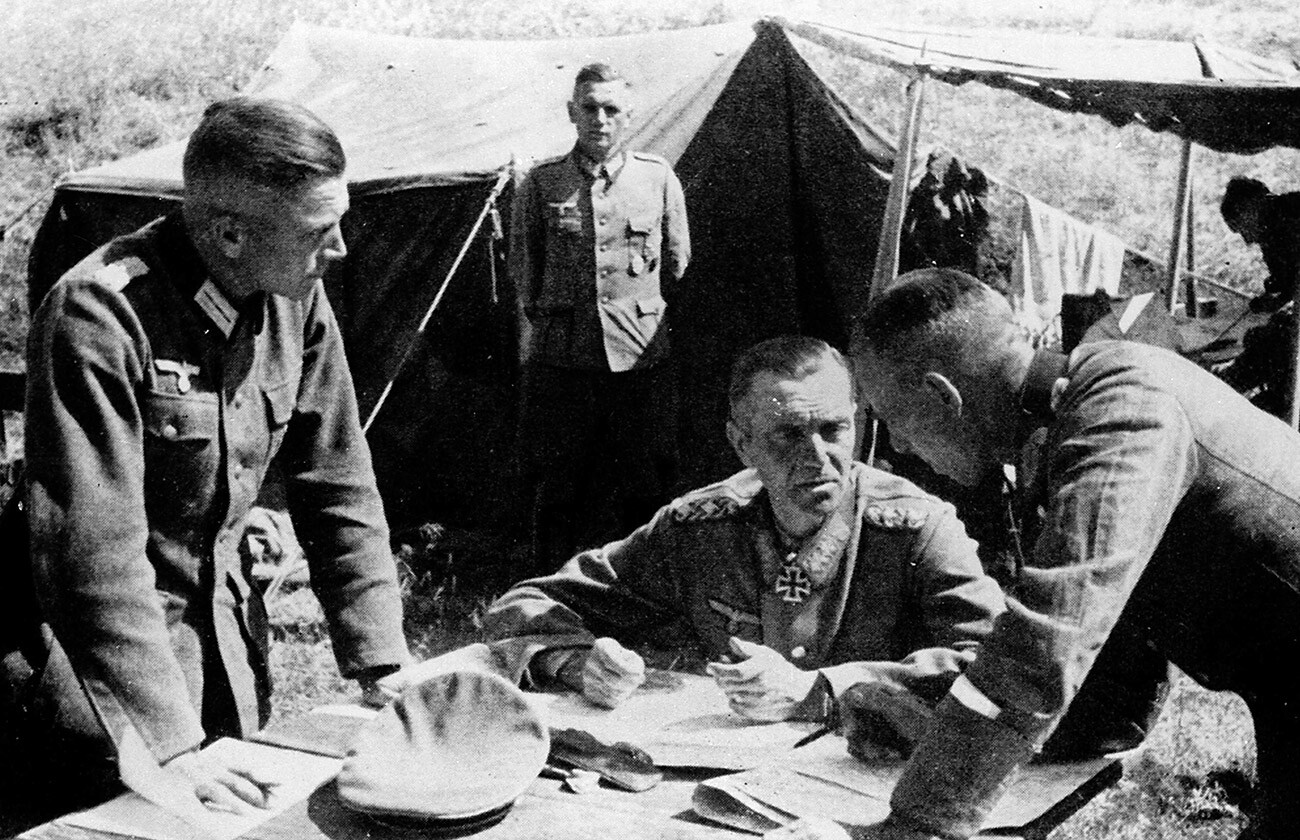 Friedrich Paulus, sat in the middle, with his staff of the 6th army in front of Stalingrad, September 1942.

As far more German troops ended up in the “cauldron” than the Soviet command had initially anticipated, destroying them proved an extremely difficult and protracted task. Entrenched in Stalingrad and a number of settlements to the west of the city, the enemy put up fierce resistance in the hope of the early arrival of help. The commander of the combined grouping, Paulus, still had seven airfields at his disposal, which the Luftwaffe used to deliver food and ammunition.

On December 12, the Germans launched ‘Operation Winter Storm’ to break the encirclement of the 6th Army. Despite initial successes, the forces of Generalfeldmarschall Erich von Manstein were halted 48 km from the city. In the end, Paulus stopped short of attempting a breakout to meet them, fearing that he would be easily destroyed in the frozen wastes of the open steppe. 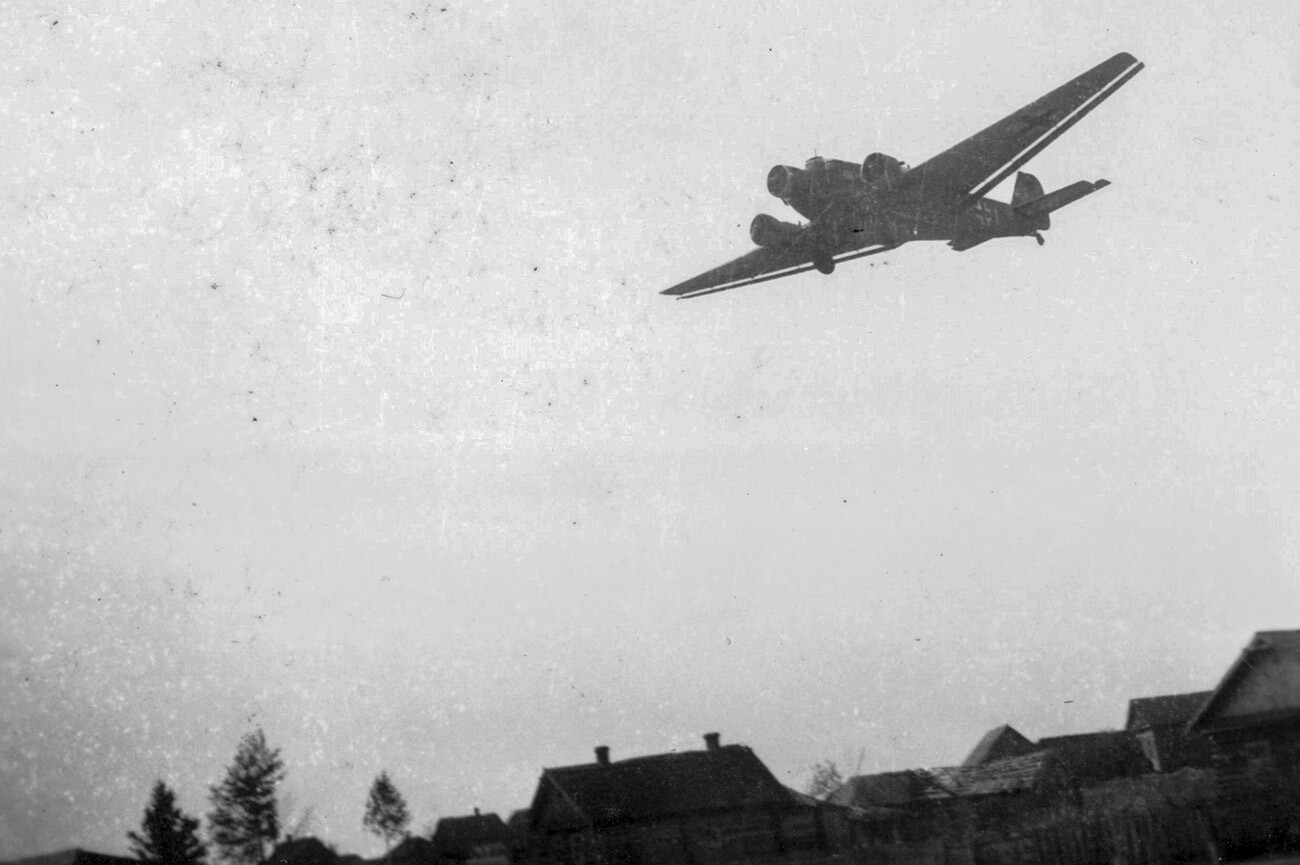 While ‘Operation Winter Storm’ was raging south of Stalingrad, northwest of the city, the Red Army launched the offensive codenamed ‘Operation Little Saturn’, during which it destroyed several Italian and Romanian divisions and broke through the enemy front lines to a depth of 340 km. A threat was now posed to the rear units of Manstein himself and in the end this forced him to start retreating on December 24.

News of the failure of the push for the city had not yet reached Stalingrad. “The units craved encouraging news,” recalled Wieder. “The frontline was holding on with the last of its strength, banking on Hitler imminently, in the run-up to Christmas, fulfilling his promise of relief. The phrase ‘Manstein is coming!’ was still on everyone’s lips. But it was precisely during those days, when everyone was still waiting, believing and hoping, that the approaching formations tasked with releasing the 6th Army from its encirclement were halted and then pushed back by Russian forces without reaching their objective.” 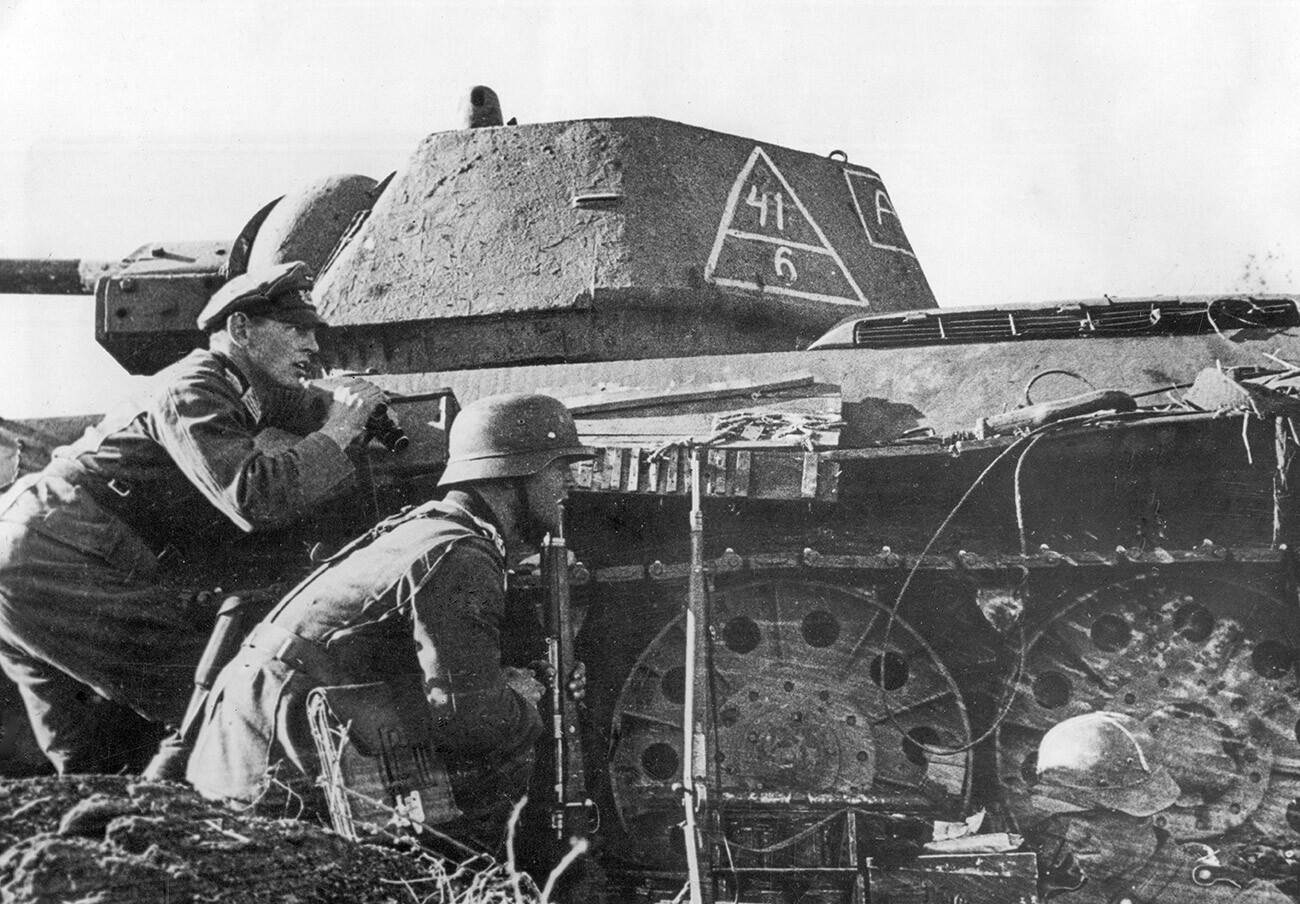 On January 4, 1943, the Supreme High Command Headquarters adopted the plan of Operation Koltso (Ring), under which the Don Front troops under General Konstantin Rokossovsky were to tighten the encirclement around Paulus’ grouping and then split it up and destroy it piece by piece. General Vasily Chuikov's long-suffering 62nd Army, which had heroically held on at Stalingrad during the heavy fall battles, was to go on the offensive on the streets of the city themselves.

By an unfortunate twist of fate, the 57th Army under General Fyodor Tolbukhin was to attack the defensive lines whose construction he himself had supervised the previous summer. Some of them had then been abandoned by Soviet troops without a fight and now they were occupied by Wehrmacht soldiers. “Alas, I had built the thing in the first place and now it came back to bite me!” lamented the commander. 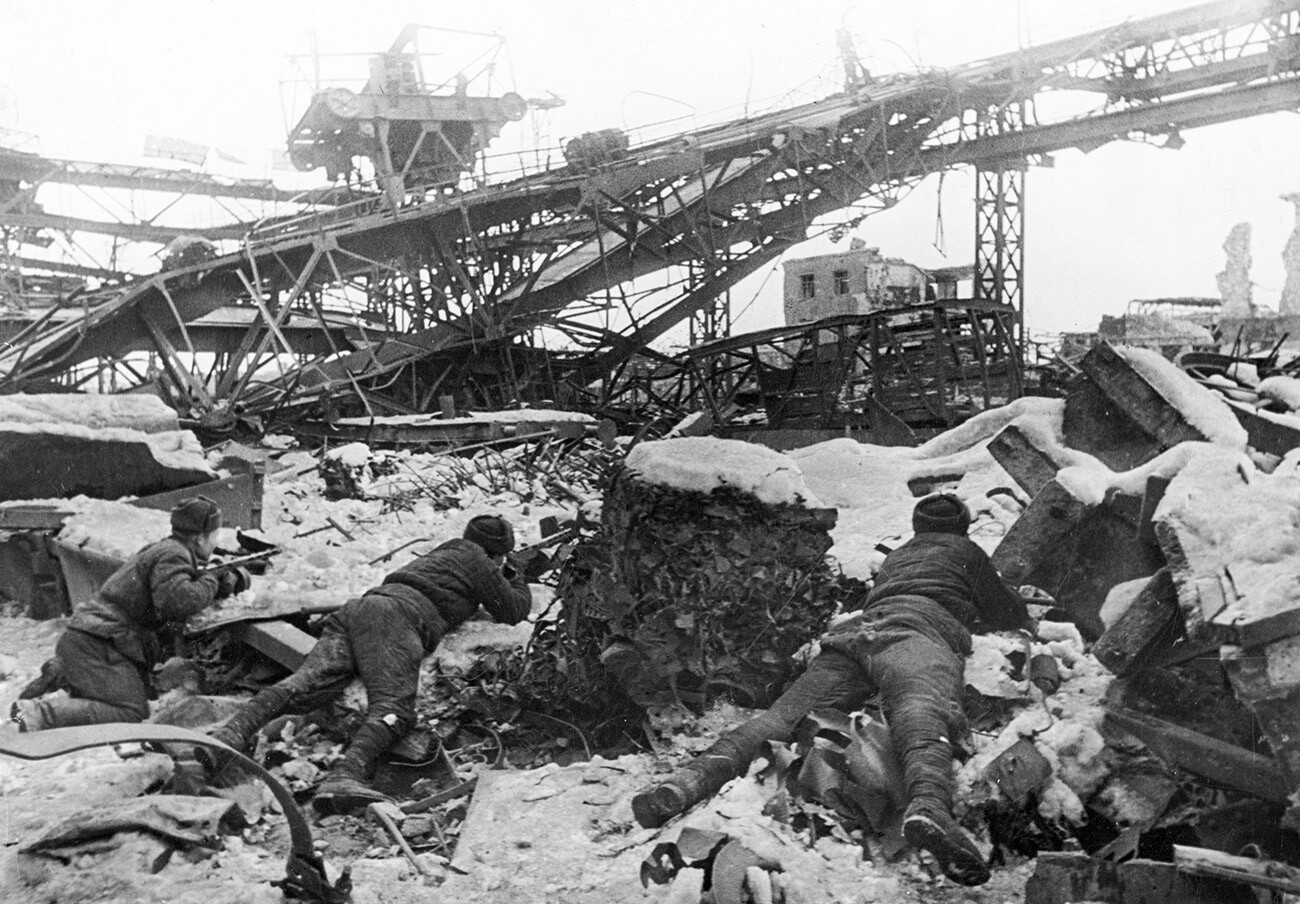 Soviet infantry fighting in the ruins of the factory in Stalingrad.

The Germans flatly turned down an ultimatum to surrender and the Red Army attack began on January 10. The Soviet troops were numerically inferior to the enemy (Rokossovsky had 212,000 men at his disposal, compared with Paulus’ 250,000), but they held an overwhelming advantage in armored vehicles and artillery and also possessed full mastery of the air.

“In an instant, the deafening detonations of more than 7,000 pieces of ordnance and mortars turned into a solid and continuous roar,” recalled Nikolai Voronov, who was serving then as a chief of artillery in the Workers’ and Peasants’ Red Army (to give the Red Army its full name). “To the right, to the left and above us could be heard the whistle, wail and whoosh of flying shells and mortars and the ground quaked in the enemy positions. This continued for 55 minutes. There was not a single return of fire from the enemy.” 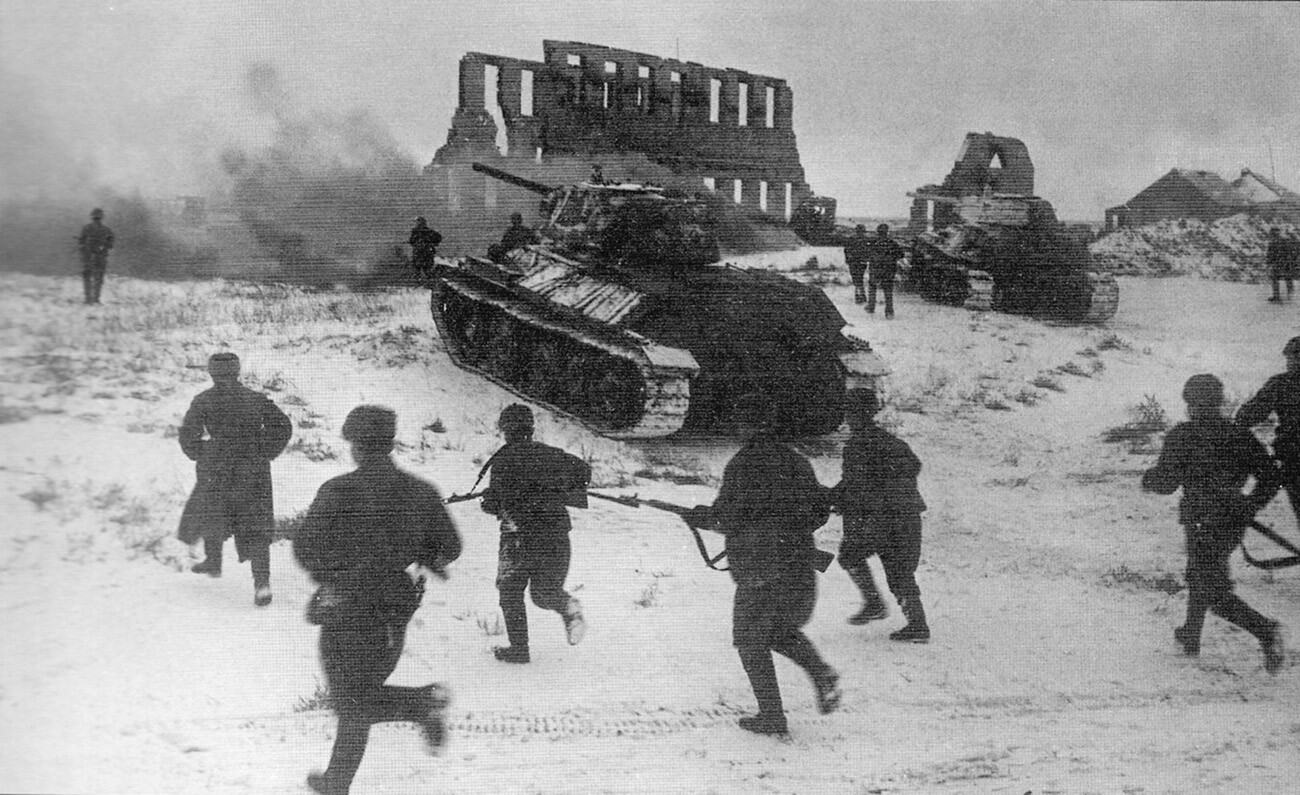 Despite fierce resistance on the part of the Germans, the Soviet troops overwhelmed one defensive enemy line after another. On January 15, they seized the Pitomnik airfield, which was of crucial importance for the 6th Army and two days later they reached the immediate approaches to Stalingrad itself.

“I have to note that the enemy had built very strong fortifications here,” Rokossovsky wrote in his memoirs. “Highly fortified strongpoints, with a large number of earth-and-timber emplacements, pillboxes and tanks dug into the ground, stood next to one another. The approaches to them were completely enmeshed in barbed wire and heavily mined. The frost reached minus 22°C and the blizzards got worse. Our troops had to advance across open ground, while the enemy lay ensconced in trenches, shelters and dugouts.” 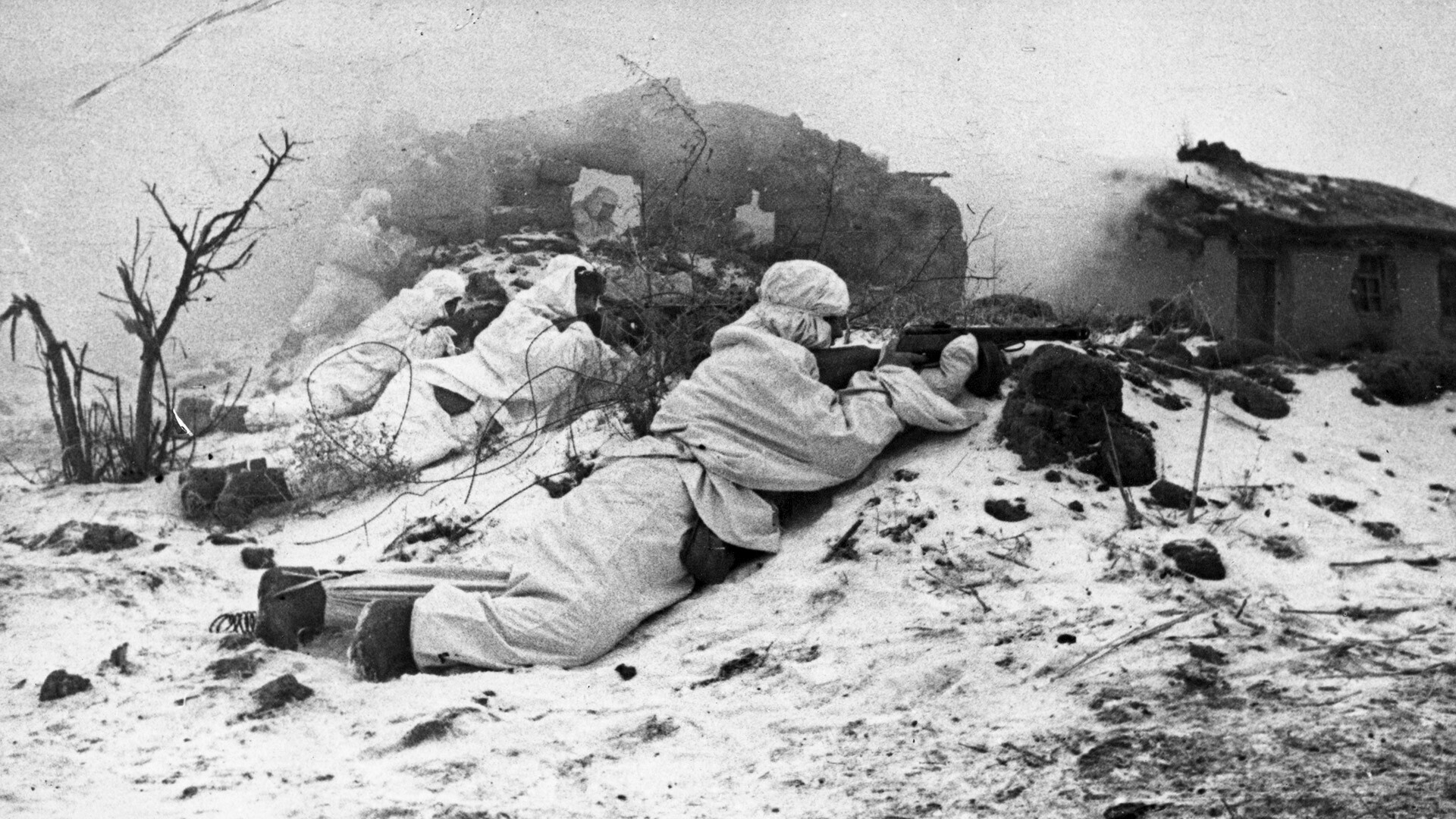 Soviet troops during the Battle of Stalingrad.

The loss of the airfields and the proficient work of Soviet air defenses caused the resupply situation for the encircled 6th Army to become critical - a German soldier would get no more than 150 grams of bread and 70 grams of meat per day. A mood of defeatism and panic swept rapidly through the troops, but Hitler forbade Paulus to even consider capitulation, ordering him to stand fast and await assistance.

On the morning of January 26, the troops of the Soviet 21st and 62nd armies met up to the south at the Krasny Oktyabr settlement and on Mamayev Kurgan, thus splitting the German grouping into two parts. The “southern” grouping, where Paulus’ HQ was located, found itself beleaguered in the center of the city. The “northern” one, commanded by General Karl Strecker, held on in the area of the Stalingrad Tractor Factory and the Barrikady Arms Factory. 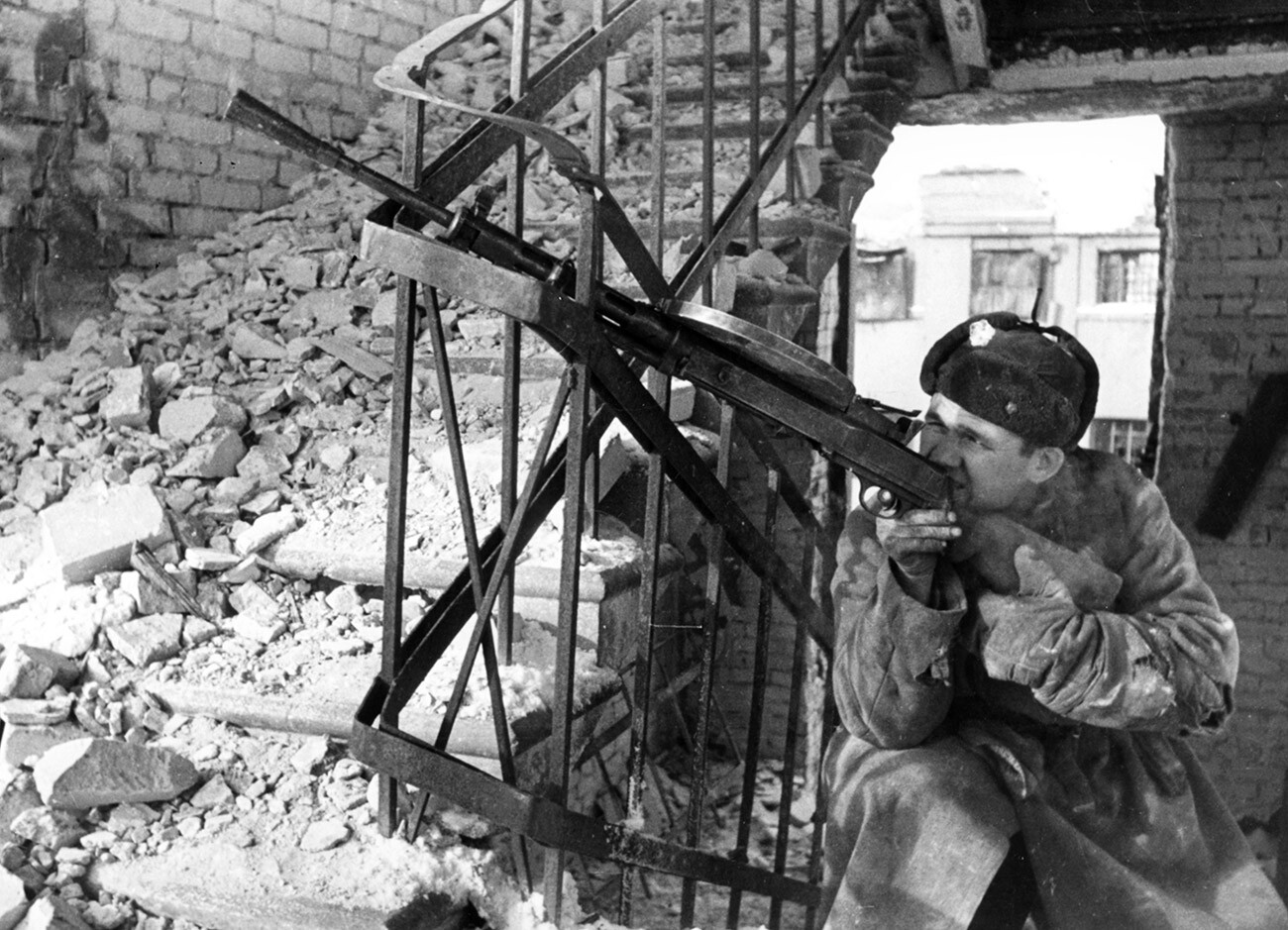 Bloody battles took place for the railway station, the bread-baking plant, the grain elevator and Pavshikh Bortsov (Fallen Fighters’) Square. At the same time, German soldiers began to surrender en masse and to be taken into captivity. On January 31, Friedrich Paulus, who had been bottled up in the department store building, gave himself up to Soviet troops. The day before, Hitler had promoted him to the rank of Generalfeldmarschall. Emphasizing in a telegram that “not a single German field marshal has ever been taken prisoner”, the Führer was effectively demanding that his commander commit suicide. To no avail, as it happened.

“Paulus was haggard and clearly ill," recalled Sergeant Pyotr Alkhutov. “He attempted to conduct himself in a suitably dignified manner, but, in his condition, it was difficult for him to manage. On that frosty morning in Stalingrad, it dawned on all the men of the Red Army and the overwhelming majority of the German soldiers that this was the beginning of the end for them and the start of our Victory.” Strecker capitulated with his troops on February 2. 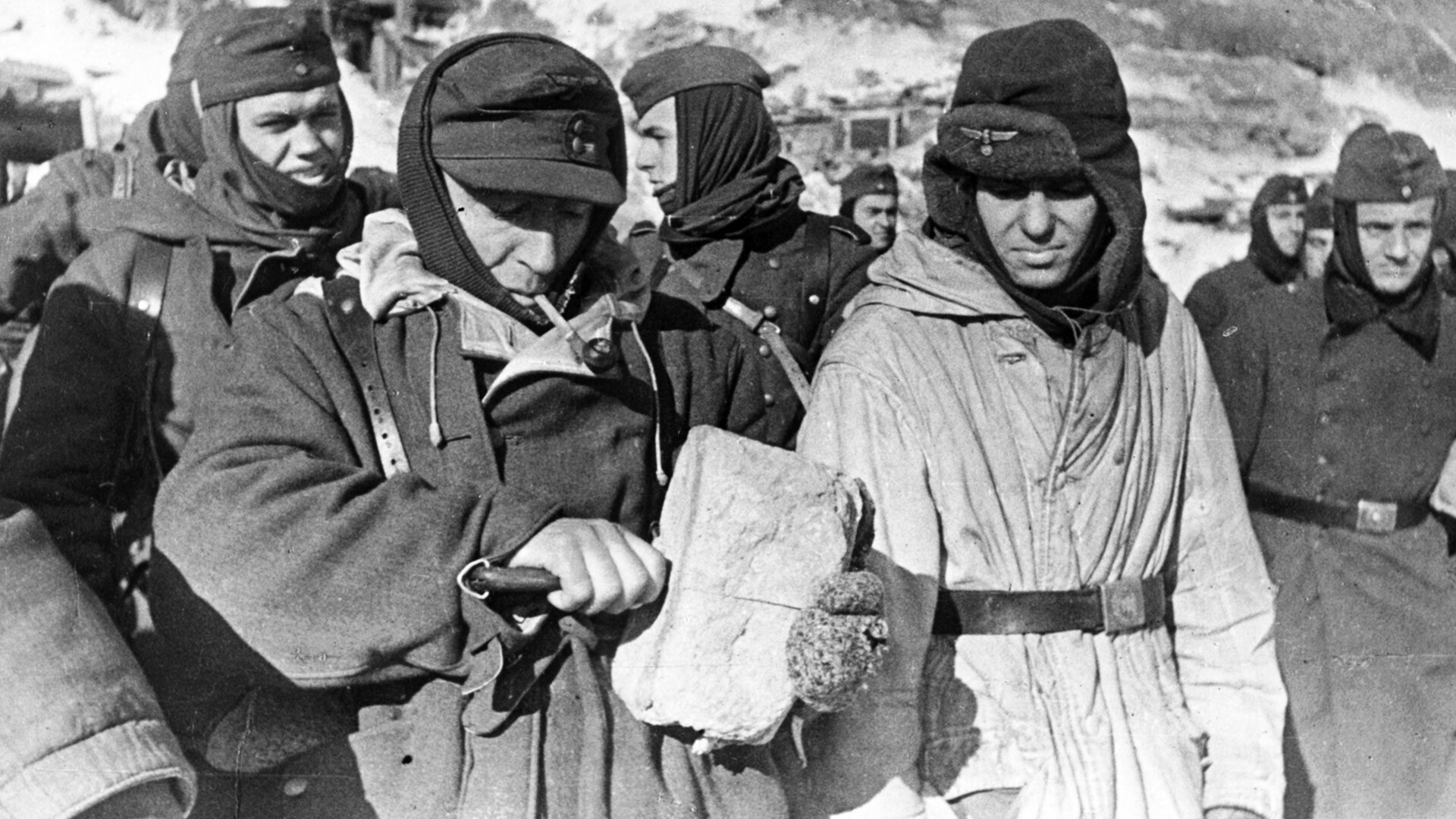 Three days of national mourning were declared in the Third Reich - an event unprecedented since the start of the war. “The defeat at Stalingrad filled both the German people and its army with horror,” wrote General Siegfried Westphal. “Never before in the entire history of Germany had there been such a terrible loss of such a number of troops.” 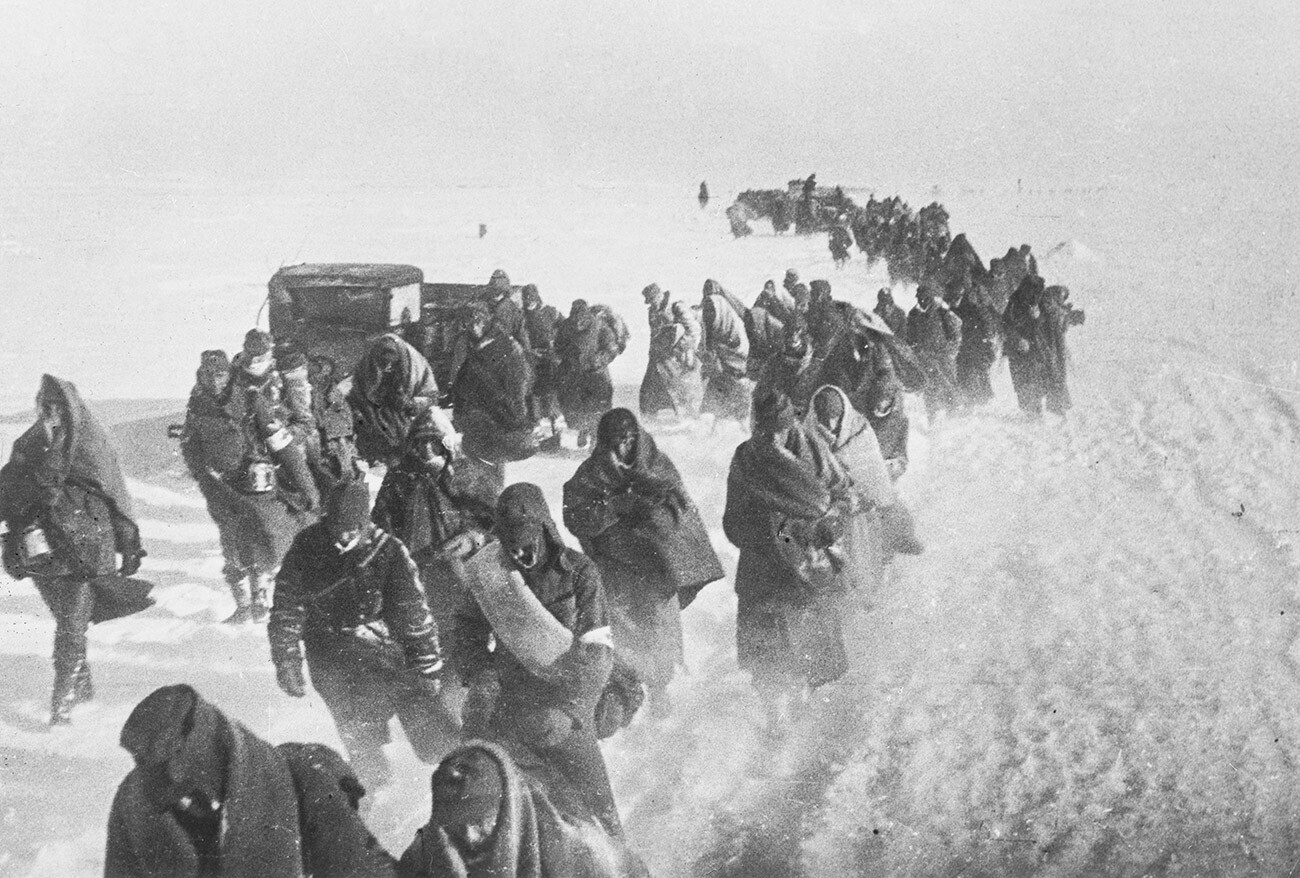