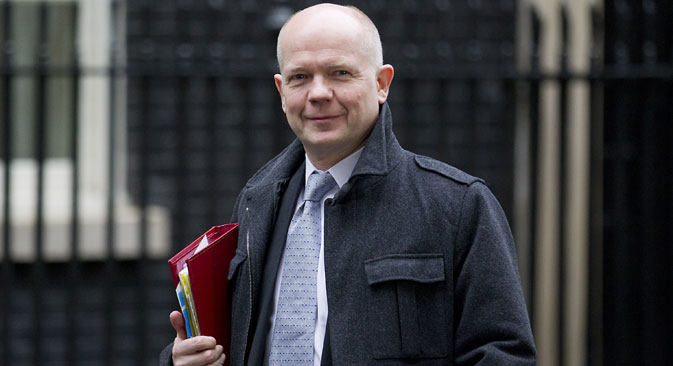 The first UK–Russia meeting in a “2+2” format is an important moment in the relationship between our two countries. Source: London News pictures / REX Features

A UK–Russia meeting involving ministers of foreign affairs and defense is intended to further promote positive relations between the two countries.

In an interview with Olga Gorovanova of Kommerstant, UK Foreign Secretary William Hague spoke about UK-Russian relations and what he expects from today's 2+2 meeting in London.

Kommersant: How can relations between the UK and Russia be strengthened?

William Hague: There have been quite a few positive changes in relations between the UK and Russia since I became Foreign Secretary in 2010. British Prime Minister David Cameron’s visit to Moscow in 2011 and Russian President Vladimir Putin’s visit to London last year demonstrate a strengthening of political contacts at the highest level.

Hague unhappy about lack of progress in probing Magnitsky death

It is absolutely right that two permanent members of the UN Security Council should maintain a steady dialogue, including on the question of how we can work together to solve difficult problems such as the situation in the Middle East, Iran and Afghanistan. Both sides need to continue working on developing relationships in the areas of trade, science and innovation, and higher education. I hope that our meeting on March 13 will help us to make progress in developing our relationship.

K.: Should the relationship between the two countries focus on the economic sphere, or should cooperation also be strengthened in other areas?

W.H.: We do have some key differences, such as human rights issues in Russia and our view of the problems in Syria, but there is also a wide range of areas where our countries are cooperating successfully, in addition to the existing trade and investment relationships.

This year they will be strengthened because our countries are chairing the G8 (UK) and the G20 (Russia). In addition, we are continuing our cooperation in terms of passing on the heritage and experience we’ve gained in staging the Olympic Games from London 2012 to Sochi 2014.

Last year we agreed to hold regular consultations between the Russian Ministry of Foreign Affairs and the UK Foreign Office on Syria, Iran and Afghanistan, and also on military cooperation, including discussion of our respective reform programs. It’s important that 2014 will be a year of cultural exchange between the UK and Russia, which I am sure will raise the level of understanding between the two countries and the respect for each other’s heritage.

K.: What are the main issues that you would like to discuss in a “2+2” format?

W.H.: The first UK–Russia meeting in a “2+2” format is an important moment in the relationship between our two countries. We shall hold a joint session of the ministers to discuss general matters concerning security policy. Minister Lavrov and I shall discuss the main issues of international politics, including Syria, Iran and the situation in North Africa. We feel positive about working with Russia during its chairmanship of the G20 and the UK’s of the G8 to ensure that both summits are successful.

K.: Is the business of the death of Alexander Litvinenko still the main obstacle to the development of UK–Russian relations?

W.H.: The UK government remains committed to securing justice in the Litvinenko case, and we believe the UK is the right place to try the main suspect in the case.

W.H.: We are welcoming more and more Russians who are visiting the UK as tourists or for business or educational purposes. We’ve already held talks about improving the process for obtaining a UK visa, but we have no plans to change the visa system as such.

K.: Last year the British Foreign Office introduced a ban on entry into the country by people who have violated human rights. Did that affect any Russian citizens in practice, in particular those who London believes are involved in the death of Sergei Magnitsky?

W.H.: The “Magnitsky case” is a matter of extreme concern to the UK government and is regarded as one of the most conspicuous examples of the flaws in the Russian judicial and prison systems.

The obligation to maintain confidentiality restricts the UK government in discussing the details of individual cases of people visiting the country. If there is reliable evidence that someone has committed a violation of human rights, there is a high probability that that person will be denied entry to the UK. This policy applies not only to visa applications by Russian citizens but also to those by people from other countries.

K.: How do you rate the cooperation between the UK and Russia on the international stage, particularly with regard to Syria?

W.H.: Russia is an important partner for the UK. A robust relationship between the two countries means that we can express differing opinions while also maintaining a pragmatic dialogue in order to solve existing problems.