G8 leaders come to an agreement on Syria 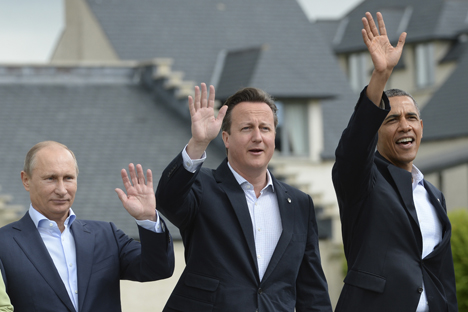 Russia has persuaded other powers to look for ways toward a peaceful settlement.

Political settlement is the only path toward resolving the Syrian crisis – this is the message of the final declaration of the G8 Summit held in Northern Ireland on June 17-18.

Should its provisions be implemented, this would signify perhaps the first ever recognition by the West of the reality of the multipolar world.

The Syria issue undoubtedly dominated this G8 Summit. Indeed, the debate began before the leaders gathered at the Lough Erne golf resort.

To start with, the U.S. announced it had proof of the use of chemical weapons by Syrian government troops: they were used on a small scale last year. Yet only today did the U.S. choose to declare it to be a crossing of the “red line.”

Washington thus announced that it was beginning to supply arms to the rebels, though nothing was said about the timeframe and the kinds of aid.

Opinion: G8 meets in Northern Irish town with a history of conflict

Since France and Britain had, by that time, brought about a lifting of the EU embargo on arms supplies to Syria and recognized the chemical attacks by government troops – coming as it did on the eve of the G8 Summit – this U.S. move created the impression that Putin, who opposes toppling Assad by force, would be totally isolated at the summit.

The attempts to intimidate Russia by means of international isolation continued until the final declaration of the summit was released: The media repeatedly reported leaked information to the effect that the declaration on Syria would carry no Russian signature.

Yet the Russian position remained unchanged. Moscow promptly dismissed the claims of chemical weapons use by the Syrian troops as unproven and declared that military aid to the rebels was a step aimed at disrupting the peace conference on Syria, which was initiated in May by Russia and the United States.

Later, after his meeting with U.K. Minister David Cameron, Putin explained his position to journalists in a very emotional manner. Two hours of talks with the U.S. president followed, from which Obama and Putin, looking very detached, emerged and told the press that there were still differences over Syria.

Everything seemed to indicate that, at the plenary session, the Russian president would find himself opposing the seven other summit participants – things did not turn out quite that way, apparently.

Speaking to the press after the summit, Putin stressed that he never once felt he was “one against all” on the Syrian issue.

“We had a common discussion. Somebody agreed with somebody else, somebody argued – but it was never the case that Russia was alone in upholding its approach to the solution of the Syrian problem,” the Russian leader said.

Judging from the final declaration, that was true. First, it says nothing about the fate of Assad; yet, throughout the conflict, the opposition, “the friends of Syria” and the authors of the draft U.N. Security Council Resolutions that were vetoed by Moscow and Beijing demanded his resignation with one voice.

Second, the G8 leaders condemned human rights violations by all the parties to the Syrian conflict. Third, the charge against Damascus of using chemical weapons has, for all intents and purposes, been withdrawn.

The leaders agreed “to condemn the use of chemical weapons by anyone, and crucially to enable an unhindered U.N. investigation to establish the facts,” David Cameron said. The ball is now in the U.N.’s court.

Finally – and possibly most importantly – the idea of an international conference on Syria was confirmed.

“We strongly endorse the decision to hold as soon as possible the Geneva Conference on Syria, to implement fully the Geneva Communiqué of June 30, 2012, which sets out a number of key steps beginning with agreement on a transitional governing body with full executive powers, formed by mutual consent,” the final document reads.

Given such language, it would be absurd to launch official military assistance to the rebels.

The U.S. authorities are satisfied with the G8 decision to continue seeking a political settlement to the conflict in Syria, the Western media reported on June 18, citing a high-ranking source within the U.S. administration.

“The content of the final communiqué fully meets the goals the U.S. president pursued at the talks with the leaders of the other countries – including Russian President Vladimir Putin,” the official told journalists.

Moscow is, of course, also happy with the results. The part of the final communiqué of the G8 meeting concerning Syria lays a solid foundation for continued diplomatic talks on a peaceful settlement in that country, according to deputy foreign minister of the Russian Federation, Gennady Gatilov, who spoke in an interview with ITAR-TASS.

G8 meets in Northern Irish town with a history of conflict

Yet, in a broader sense, we are talking about the emergence of a new political situation in the world, says Dmitry Suslov, deputy director of the Center for Comprehensive European and International Studies at the National Research University Higher School of Economics.

“For the West to admit that Assad might win, or at least take part in the negotiations, would mean the biggest political setback in post-Cold War history. Because if, even hypothetically, Assad stays, that means the West is no longer calling all the shots,” the political analyst believes.

In Suslov’s opinion, “Syria should either show the outlines of a new multipolarity in which Russia would be an equal partner – as is already happening over Syria – or else we will see consequences comparable to those being observed in Libya. But that is just the inertia of unipolarity.”