What can we expect from Russian foreign policy in 2016? 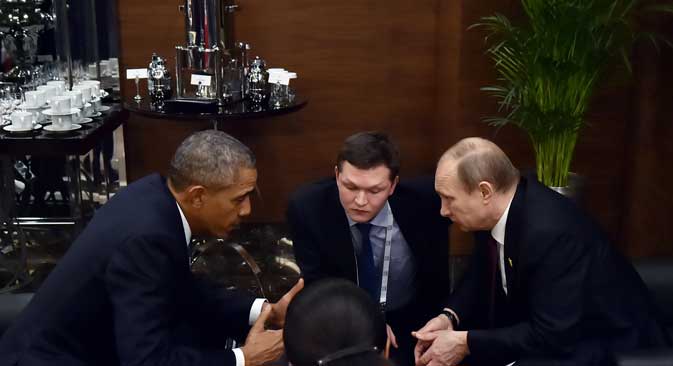 In mid-November President Vladimir Putin met with U.S.President Barack Obama on the sidelines of the G20summit in Turkish Antalya.

RIA Novosti
Russia has made use of events in 2015 to regain its status as one of the key global players, but at a very high price – a price that it will continue to pay in 2016, according to political analysts, who argue that Moscow needs to focus on mending fences with the West.

Most pundits have long agreed that when it comes to Russian foreign policy, which has been in the spotlight of foreign analysts and media since the start of the Ukrainian crisis in late 2013, Moscow acts with a great deal of improvisation in making decisions, resulting in an unpredictable actions and decision-making.

This spontaneous and unpredictable nature means Moscow’s foreign policy consistently creates surprises for the West. In 2014, for example, the international community was caught by surprise by the takeover of Crimea and Russia’s subsequent involvement in the conflict in eastern Ukraine. In 2015, meanwhile, Moscow started its military campaign in the Middle East against Islamic State (ISIS) and the Syrian opposition.

However, while 2014 saw more failures (the economic and financial sanctions put in place by the West, along with general isolation from its European and American partners), 2015 has been more successful as Russia returned to the global arena as one of the key actors.

The G20 summits in 2014 and 2015 reflect this trend. Last year Russian President Vladimir Putin experienced a cold reception, but this year the Kremlin advanced on the diplomatic front, meeting with a number of Western leaders, including U.S. President Barack Obama and UK Prime Minister David Cameron.

Most analysts agree that a main achievement of Russia’s foreign policy this year has been to offset the consequences of its 2014 foreign policy gamble.

Mark Galeotti, a professor at New York University, argues the Kremlin has managed “to mitigate some of the worst impacts of the post-Ukrainian adventure” and prove “that to a certain extent it is a regional and global player.”

Aurel Braun, a professor of International Relations and Political Science at the University of Toronto, agrees Russia has ensured it is “an important player” that “needs to be respected and consulted.”

However, Moscow has achieved that success at a heavy cost, he added.

The Kremlin’s aspirations to regain its status as a key geopolitical player have not gone unnoticed. They come at a high price in the form of prolonged sanctions, damage to its reputation, harsh criticism from the West, and even threats of terror: Moscow started its direct military campaign in Syria on Sept. 30 and a month later a Russian passenger plane exploded over Egypt, in all likelihood due to a terrorist act.

According to Dr. Robert Freedman, a visiting professor from Johns Hopkins University in Baltimore, Moscow’s Syrian campaign “is not a cost-free operation for Russia.”

“While Russian President Vladimir Putin may have hoped he could use the situation in Syria to support Syrian President Bashar al-Assad and demonstrate Russian influence in the Middle East, so far the Russian operation in Syria has cost Russia a passenger plane with 224 lives, a fighter-bomber and a helicopter, with more losses likely to come,” Freedman told RBTH.

Russian-Turkish tensions will likely adversely affect Russia’s foreign policy in 2016, given that the Kremlin imposed immediate economic sanctions against Ankara.

“By breaking its ties with Turkey, Russia risks moving further down the slippery slope, letting political and status consideration undermine the economic rationale of relations with the outside world,” warned Mikhail Troitsky, a Moscow-based political and international affairs analyst.

“Russian retail markets will see tangible price increases as a result of bans on imports of products from Turkey... such logic could inflict major irreversible damage on the Russian economy and the well-being of Russian citizens,” he said.

What will come next in 2016: negative scenarios

If the Kremlin falls out with Turkey, will Moscow be able to find new partners, considering that its relations with the West are far from ideal? What alliances might emerge from the Russian-Turkish schism in 2016?

According to Aurel Braun, Russia will keep expanding its cooperation with the regime of Syrian President Bashar al-Assad and with Iran. However, he argues, such cooperation will be problematic in the longer term “because the Assad regime is really not viable and Iran’s long-term interests, both in pursuing Islamism and ultimately in its desire to become a nuclear power, are incompatible with Russia’s best national interests.”

Ironically, Russia’s confrontation with Turkey is pushing the EU and NATO closer to the regime of the Turkish president, which the EU has criticized heavily for its gross abuse of human rights, Braun added. Further, the Russian-Turkish confrontation may well damage Russia’s relations with the West.

Cold peace with Turkey but no Cold War with the West

According to Aurel Braun, repairing relations with the EU and U.S. should be top priority for Russia in 2016, but it “does require a reorientation of Russian policy” and “its willingness to compromise on a number of issues ranging from Ukraine to the Middle East.”

Troitskiy is skeptical about the possibility of compromise between Russia and the West in 2016.

“The painful sanctions against Russia are likely to remain in place until the Donbass is returned to Ukraine, while a full-fledged coalition to combat Islamic State will not materialize until there is agreement on the shape of a post-war political settlement in Syria,” said Troitsky.

In general terms, Troitsky continued, the West will keep pointing to the lack of trust with Russia as the main obstacle to cooperation, and Russia will continue to point fingers at the West for causing the mistrust.

“For the U.S.-Russia proxy war in Syria to be averted and greater progress on the broad coalition to take place, a critical intervention from the White House is required not only to compromise with the Kremlin on Assad, but also to discipline Turkey and Saudi Arabia,” said Andrei Tsygankov, a professor of International Relations and Political Science at San Francisco State University. “The potential for that intervention is nowhere to be found.”

A positive scenario is less likely

Most pundits seem to be pessimistic about Russia’s foreign policy in 2016. A favorable outcome requires a great deal of political will among global stakeholders, and their divergent geopolitical interests make such a scenario unrealistic. Nevertheless, Tsygankov sees a light at the end of the tunnel.

“If there is progress in Russia’s engagement with the West in counter-terrorism in Syria, if there is no major escalation in Ukraine and if a modest economic recovery begins, Russia’s vision of world order may be vindicated,” he said.

In this case, he believes, it is possible international events could develop positively in 2016. “That vision is based on respect for sovereignty, spheres of influence and multilateralism,” said Tsygankov.

Read more: If ISIS swallows the Taliban, will Afghanistan become a caliphate?