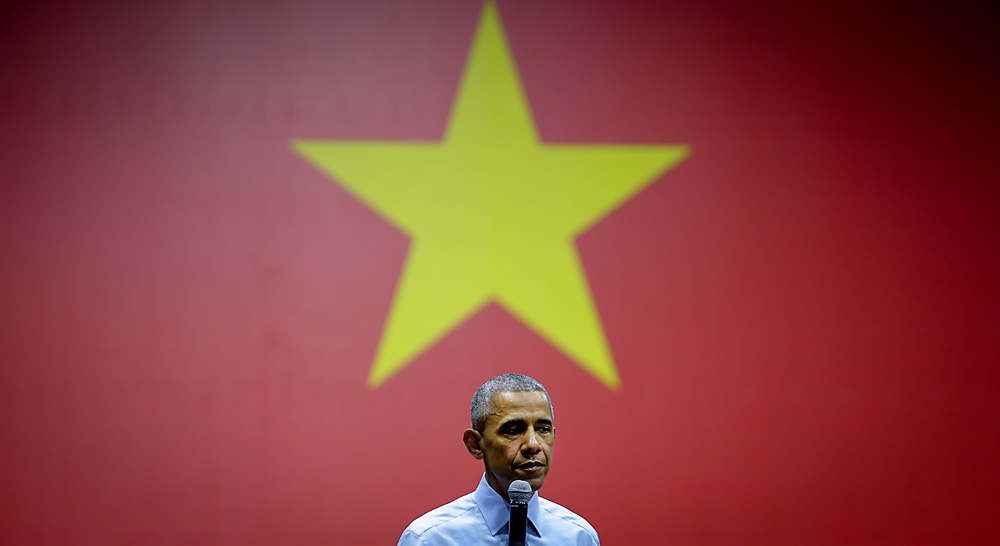 EPA
By lifting the arms export embargo and paving the way for Vietnam to join the TPP, the U.S. may be trying to pull the Southeast Asian country by its side to hold China back, Vladimir Kolotov, one of Russia’s leading Vietnam experts told RBTH in an exclusive interview.

On May 23, 2016, U.S. President Barack Obama lifted a decades-long arms embargo against Vietnam. The move has raised alarm bells in Russia’s defense industry.

In an interview with RBTH, Vladimir Kolotov, professor of Asian Studies at the St. Petersburg State University and an expert on the military history of Indochina, talks about America’s plans in Vietnam and how they could impact Russia and China.

On his recent visit to Hanoi, did Barack Obama accomplish anything that could cast a shadow on Russia’s strategic relationship with Vietnam?

The U.S. builds ties with other countries keeping a long-term perspective in mind.  Americans know how to effectively link different issues together in order to achieve their goals. Obama's visit to Hanoi had two things that should concern Moscow.

The first is the lifting of the lethal arms export embargo to Vietnam, which is a clear message to Beijing and Moscow. The second is Obama’s ongoing efforts to launch the TPP and to lure Vietnam into it. In this specific area, the U.S. is in a very strong position, when compared to Russia, because the U.S.-Vietnam trade turnover at $40 billion is ten times larger that Russia’s bilateral trade with the country.

Is there any threat to Russia's defense industry?

The U.S. is the world’s largest arms exporter and it’s clear that they will try to wipe Russia out from this market. It's hard to say now, whether Vietnam is interested in this or not, but Hanoi now has a choice between two exporters and Washington will clearly play on this. This at least will have an effect on prices and other conditions of Russia's arms exports to Vietnam, because Vietnam and many countries in the region are trying to diversify their arms imports

Are there any big Russian flaws that the U.S. can take advantage of?

Well, I do not see big flaws, but the U.S. may offer more lucrative and flexible conditions for their arms exports. From the financial point of view, they can afford what Russia cannot - long term loans, for example.

This has not been announced yet, but this is how they work in other countries. Lifting the embargo is not Obama’s personal decision. Arms producers and veterans of the Vietnam War such as John McCain and John Kerry have lobbied for this for a long time. They are ready to fight for this market.

What is the goal behind lifting the embargo?

The U.S. is trying to hold China back. Direct conflicts between them are unlikely, so the Americans may try to use technology of proxy-wars with involving the regional states like Vietnam. We know how it may happen as we saw examples in Afghanistan, Ukraine and Syria.

Vietnam, as I think, is a very good candidate to be a subject of this kind of approach, because in terms of military potential Vietnam is number one in Southeast Asia. The U.S. will try to use them and will try to put at least informational, psychological pressure on Beijing.

But one thing should be remembered: Vietnam is neither Libya nor Ukraine. It's an ancient country, which perfectly understands what is on America’s mind and tries to play its own game.

So this is the main idea behind lifting the embargo…

Yes, I see it this way and I think they will try to go further. The U.S. already has military bases in the region, in the Philippines, and Thailand. If they manage to get any kind of military presence in Vietnam, it will be a game-changing situation and will be the first step in reviving the Southeast Asia Treaty Organization (SEATO), which existed from 1954 to 1977.

The plan was to create a kind of regional NATO in Asia, but it was dropped after the American defeat in Vietnam. Now Vietnam is seen as the main potential player in this revival. This could become a reality if Washington manages to pull Hanoi into its embrace by using Vietnam's fear of rising China. In such a case it could be very serious.

Area of new construction and the existing facility at Cam Ranh Bay, where Vietnamese warships including frigates, corvettes and patrol vessels are present. Russia has been using the port for a few decades, but pull out in 2000s. Source: Getty

Why do you think Vietnam is so important for the U.S.?

If you look at history, you'll see that Vietnamese territory, which lies on the border between continental and insular parts of Southeast Asia, has always been subject to invasions from other countries. In the 19th and 20th centuries, there were unstoppable wars to get control of these territories.

France, USSR, China, U.S., Japan, Australia and others were involved. But then China was different from what it is today, when it is becoming the largest economy in the world.

Can Russia play a role here?

Russia has a lot of potential. It has the power to shift the situation in different regions of the world by exporting weapons or using them in case a situation threatens Russian interests.

Last year Moscow showed what it could do in Syria.

This is a very subtle tool, which should be used with great precaution in order not to break the regional security balance.

The Americans can break it by over arming Vietnam and pushing it towards a conflict with China. If it happens, the U.S. has nothing to lose, but lots to gain. This is, as I see it, the major threat of lifting the arms export embargo.

How should Moscow conduct itself to put economics forward?

I'm totally unclear about what areas of the economy may push Russia's trade with Vietnam forward, despite Moscow and Hanoi saying their political relations are ideal. Both sides keep signing MoUs and are not rushing to take these MoUs forward with real action.

One of the reasons behind this is that there is no unity between business, experts and policy-makers. They need to work together on a clear strategy for Russia in Vietnam.

Let’s speculate a bit. What areas could be the most promising for growing bilateral trade?

In order to succeed, Russia should take creative steps in Vietnam. It has only kept its presence in Vietnam’s economy thanks to the Soviet legacy and enjoys good positions only in defense, atomic energy and oil and gas.

At the same time, Russia’s potential in Vietnam is huge. We have things to offer. Take IT and technologies, construction. To succeed, Russia should take part in tenders in Vietnam in building infrastructure - roads, bridges and metros. Russia has a lot of experience in building underground transport facilities in difficult places like St. Petersburg.

There is also potential in food production, textile, electronics, both production and joint development, medicine, tourism and education.

This month university students from St. Petersburg won the world championship in programming in Thailand, but there are twentyfold more students from Vietnam studying in the U.S. than in Russia. It means, that Russia should work on positioning itself better. Moscow has to make tremendous efforts to reshape its trade.