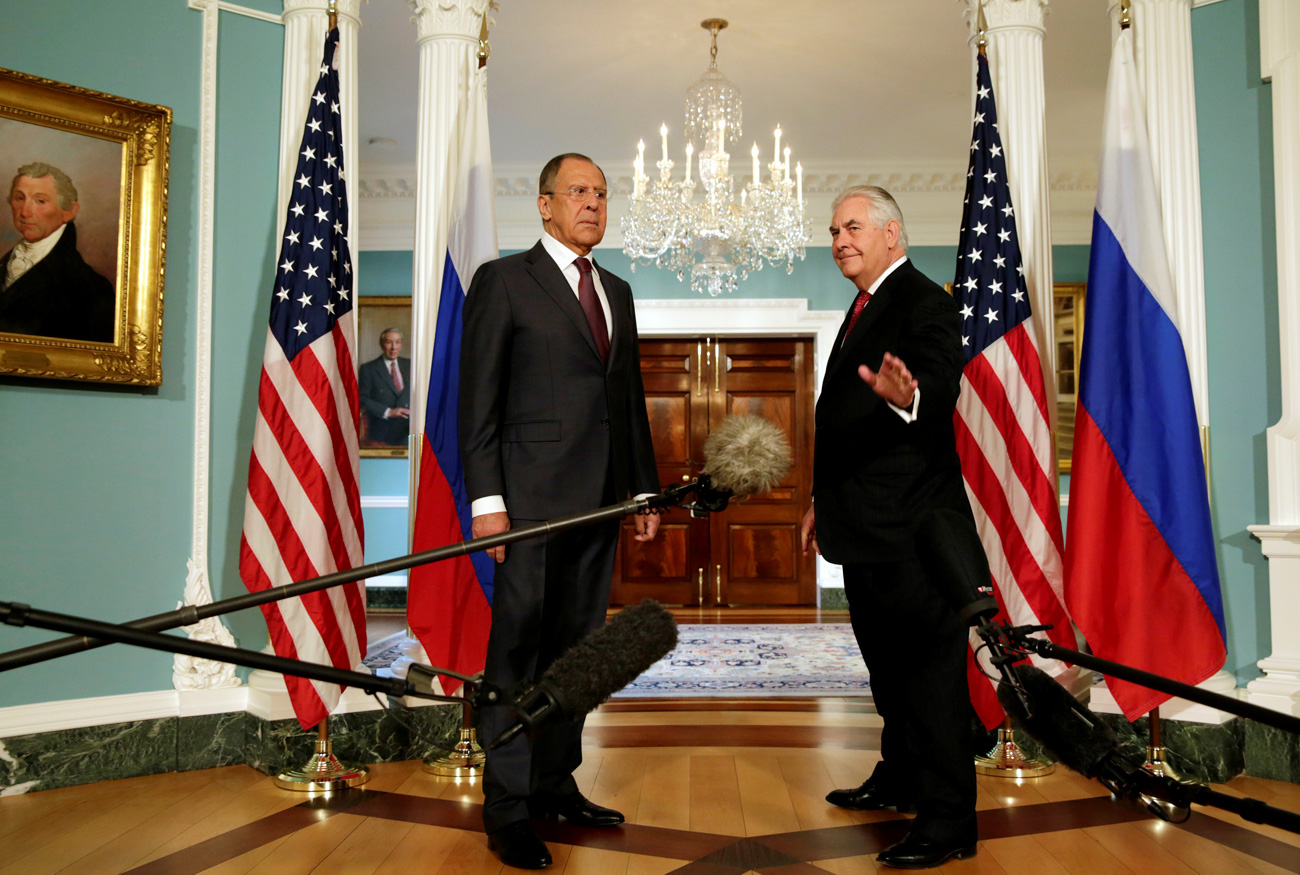 U.S. Secretary of State Rex Tillerson waves to the media next to Russian Foreign Minister Sergey Lavrov before their meeting at the State Department in Washington, U.S., May 10, 2017

Reuters
On May 10, Russian Foreign Minister Sergei Lavrov met U.S. Secretary of State Rex Tillerson and President Donald Trump. They discussed issues related to cooperation, primarily in Syria. At a press conference Lavrov confirmed that the two heads of state would finally come face-to-face at the beginning of July.

Sergei Lavrov's visit to Washington mirrored Rex Tillerson's trip to Moscow on April 11. The U.S. Secretary of State first met Lavrov before his appointment with President Vladimir Putin. On May 10, Lavrov returned the favor by first holding talks with his American counterpart and then Donald Trump.

In an interview with Gazeta.ru, General Director of Russia's International Affairs Council Andrei Kortunov underlined that the meeting between Trump and Lavrov was not simply a polite gesture. "Regardless of the importance of the Secretary of State's role, U.S. foreign policy is created by the president. I think that Trump has a certain message for Putin that he wants to send personally, through Lavrov.”

The presidents are travelling to Hamburg

Talks between Lavrov and Trump lasted 40 minutes. One of the main points, as Russia’s foreign minister confirmed during the press conference, was the confirmation of the approximate date of Putin's first personal meeting with Trump. The two presidents are set to meet during the G20 Summit over the first ten days of July.

Lavrov stressed that before the meeting between the heads of state it’s necessary to finalize several issues, in particular Syria, in order to prepare "concrete, perceptible results." He added that this is what he will do with Tillerson. 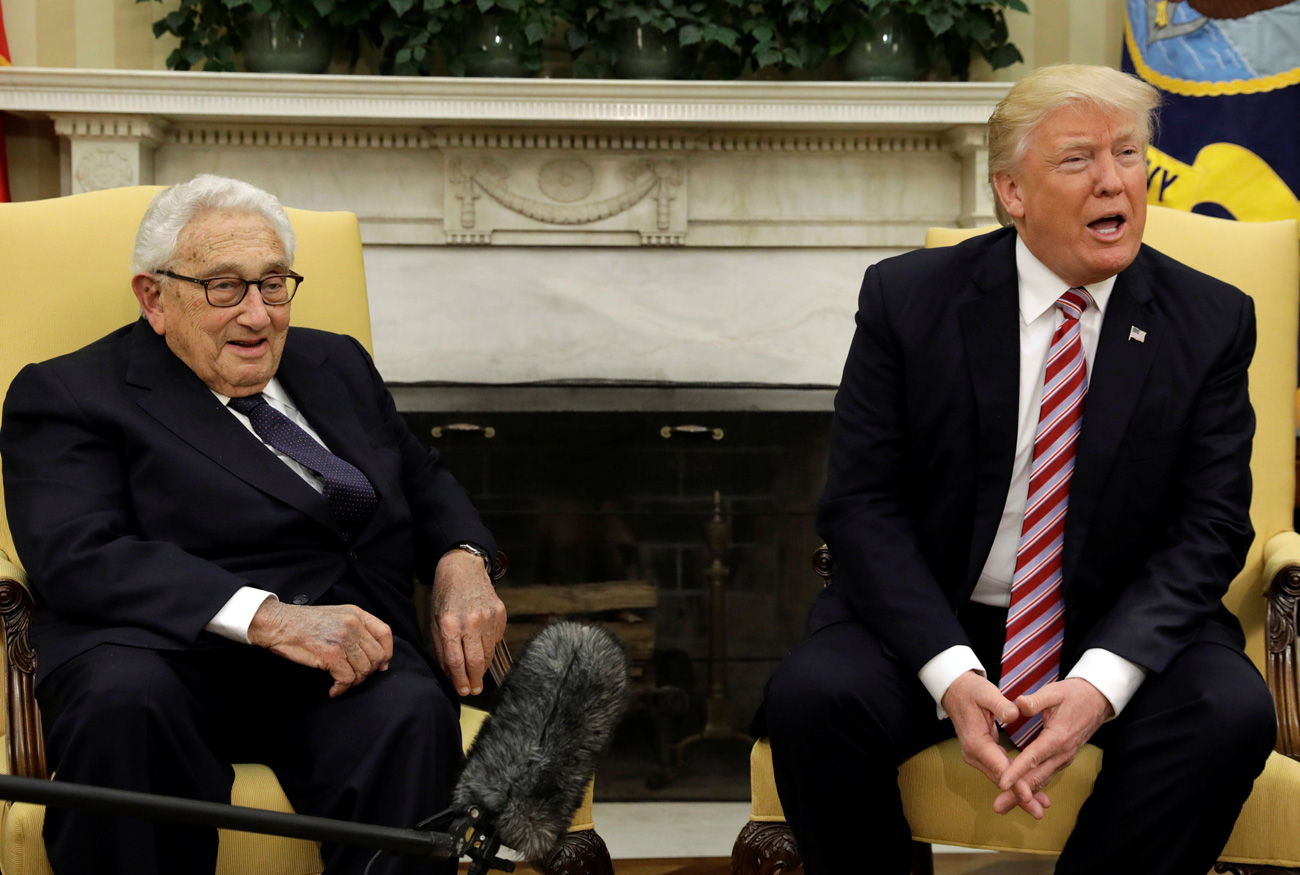 With former Secretary of State Henry Kissinger (left) at his side, U.S. President Donald Trump speaks to reporters after his meeting with Russian Foreign Minister Sergey Lavrov in the Oval Office of the White House in Washington, U.S., May 10, 2017 / Reuters

‘Was he fired? You're kidding!’

During the press conference American journalists tried to find out if the dismissal of FBI Director James Comey would influence Russian-American relations (some U.S. media outlets are linking his departure to the FBI's investigation into Moscow's alleged meddling of the presidential elections). Before the meeting with Tillerson Lavrov made fun of the press by remarking: "Was he fired? You're kidding!"

On the evening of May 10, Putin (as he was about to play in an amateur hockey match) said that Comey's dismissal is America's domestic affair and Russia has nothing to do with it, in response to a question from a CBSN journalist. In turn, Lavrov refused to discuss rumors of Russia's alleged interference in the U.S. elections, referring to them as "bacchanalia" and far detached from reality.

Comparing Trump's administration to the Barack Obama’s presidency, Lavrov underlined that with Trump, Russia-U.S. dialogue has freed itself of ideological nuances: "Trump and his administration are business people who want to make agreements."

Syria and other issues

Lavrov dedicated most of the press conference to the Syrian issue, stressing that Washington could contribute to the formation of de-escalation zones in the country. He reminded journalists that Russia and the U.S. have mutual understanding about the location of the zones and how they will function. Moscow and Washington, in Lavrov's words, are ready to cooperate on the Syrian issue. "For the U.S. the most important thing is to defeat terror. Here we are in perfect harmony,” he said.

Lavrov and Trump did not discuss the unilateral sanctions introduced against Russia by the Obama administration in December 2016. At the same time, Lavrov added that Washington understands the seizure of property belonging to Russian diplomats was wrong.

Trump stated that he was pleased with the meeting and expressed his hope that relations between the two countries would improve. According to an official White House Press Service statement, Trump underlined that Russia needs to "rein in" Assad's regime in Syria and Iran. "He also raised the possibility of broader cooperation on resolving conflicts in the Middle East and elsewhere," the statement says.