Why Russia’s pagan Udmurts are feared 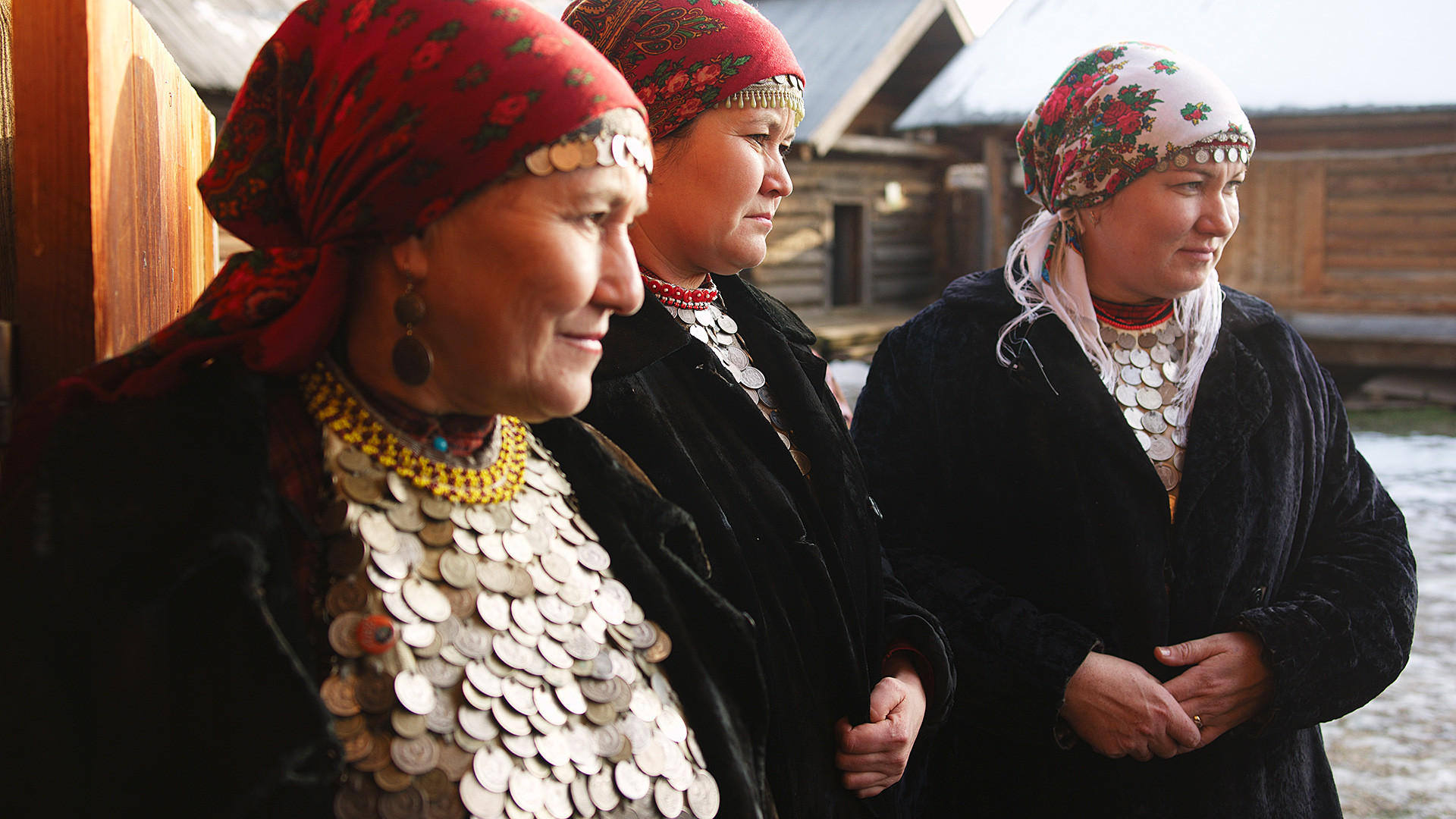 Why Russia’s pagan Udmurts are feared

Dmitry Ermakov
In the Central Urals live a people called Udmurts, and their soul, after a century, is still pagan. They believe neither in hell nor in heaven. They do not wage war and do not rebel. They call themselves ‘exclusively peaceful. They do, however, make Kalashnikovs.

Oduvanchik’s head is fully covered with embroidered shawls and it’s not clear what color her hair is – red, which many would say is a sign of a real Udmurt or dark brown.

“In order to find out what color a woman’s hair is, you need not look at her head,” she laughs. In the frosty her laugh turns into vapor. “Now the time is rather deceptive. Even hair is a deception.”

As is her name, which is not Oduvanchik but actually Svetlana. She was called Oduvanchik before Udmurts were required to obtain passports and get “normal” names. She is also a pagan. Just like every Udmurt in his or her soul, she says. We are standing by the sacred Kuala hut. It looks like a usual Russian log izba. 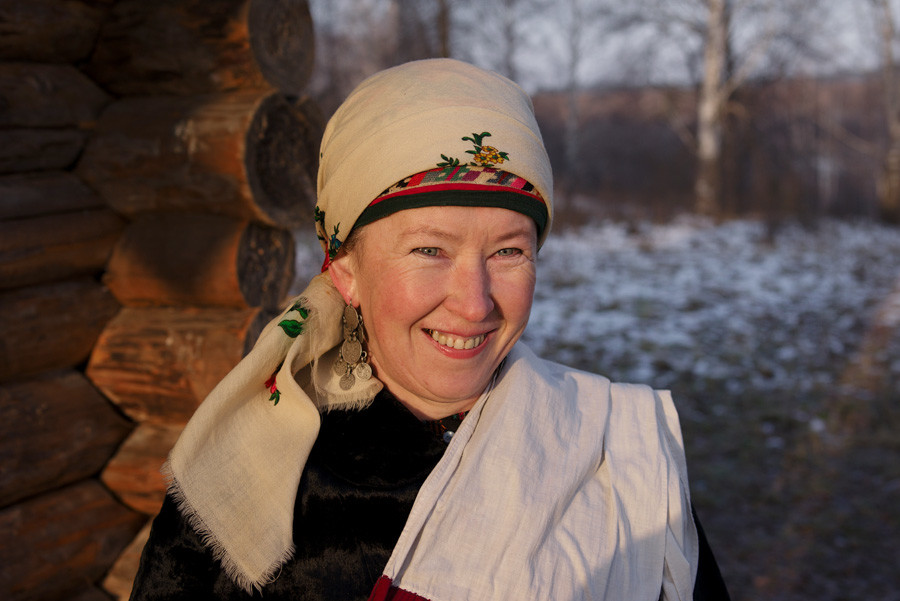 “Udmurts are polytheists. We can’t really describe what we believe in. The essence of faith nature, which has many Gods.”

Inside the it’s dark, cozy and warm. Scattered all around are ritual objects such as bowls with tribal emblems for sacrifices and shawls from the 1930s embroidered with images of the tree of life. These are all exhibits, and Oduvanchik-Svetlana is officially the senior scientific collaborator at the Ludorvai Reserve Museum, which is located in the Udmurt Republic (1,270 km east of Moscow). This is the Central Urals. An eponymous Udmurt village lies a couple of kilometers from the reserve. 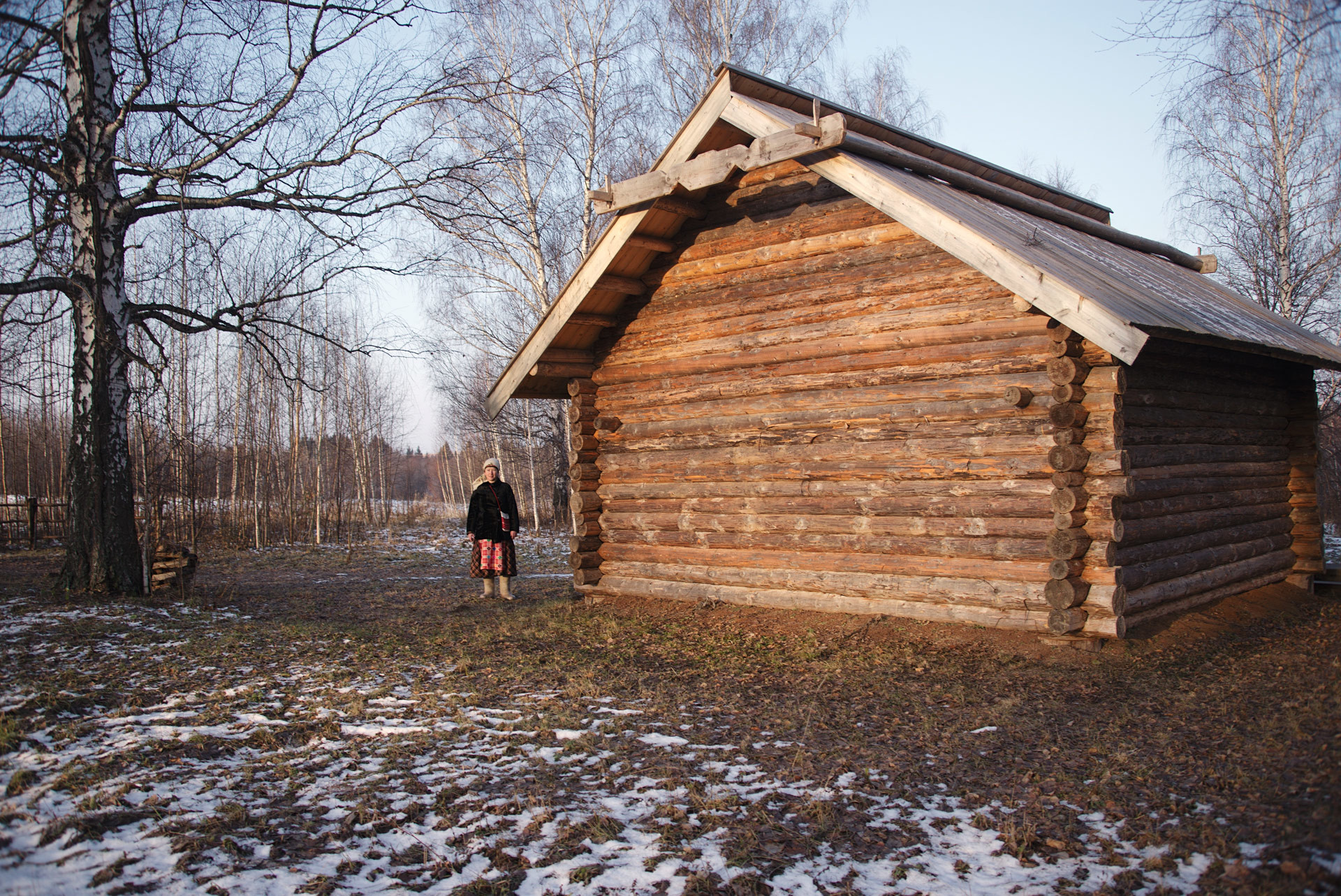 Most of the Udmurts from the north and from the south live along the Kama and Vyatka Rivers in the Udmurt Republic, just like they did several centuries ago. In 2010 during the All-Russian there were 552,000 Udmurts. In the 17th the Siberian road passed through the northern part of the republic. It was the old land trading route from European Russia to the Chinese border. This is mainly why the northern Udmurts are considered more “Russified” than the southern ones. This is the first difference.

The second is appearance. In the the Udmurts have red hair and blue eyes, while in the north they have dark hair and dark eyes. The third difference is : The southerners are open and the northerners are closed. The fourth dividing element is faith. Although most Udmurts converted to Orthodoxy in the middle of the 18th century, there are many more pagan villages in the south than in the Russified Orthodox north. 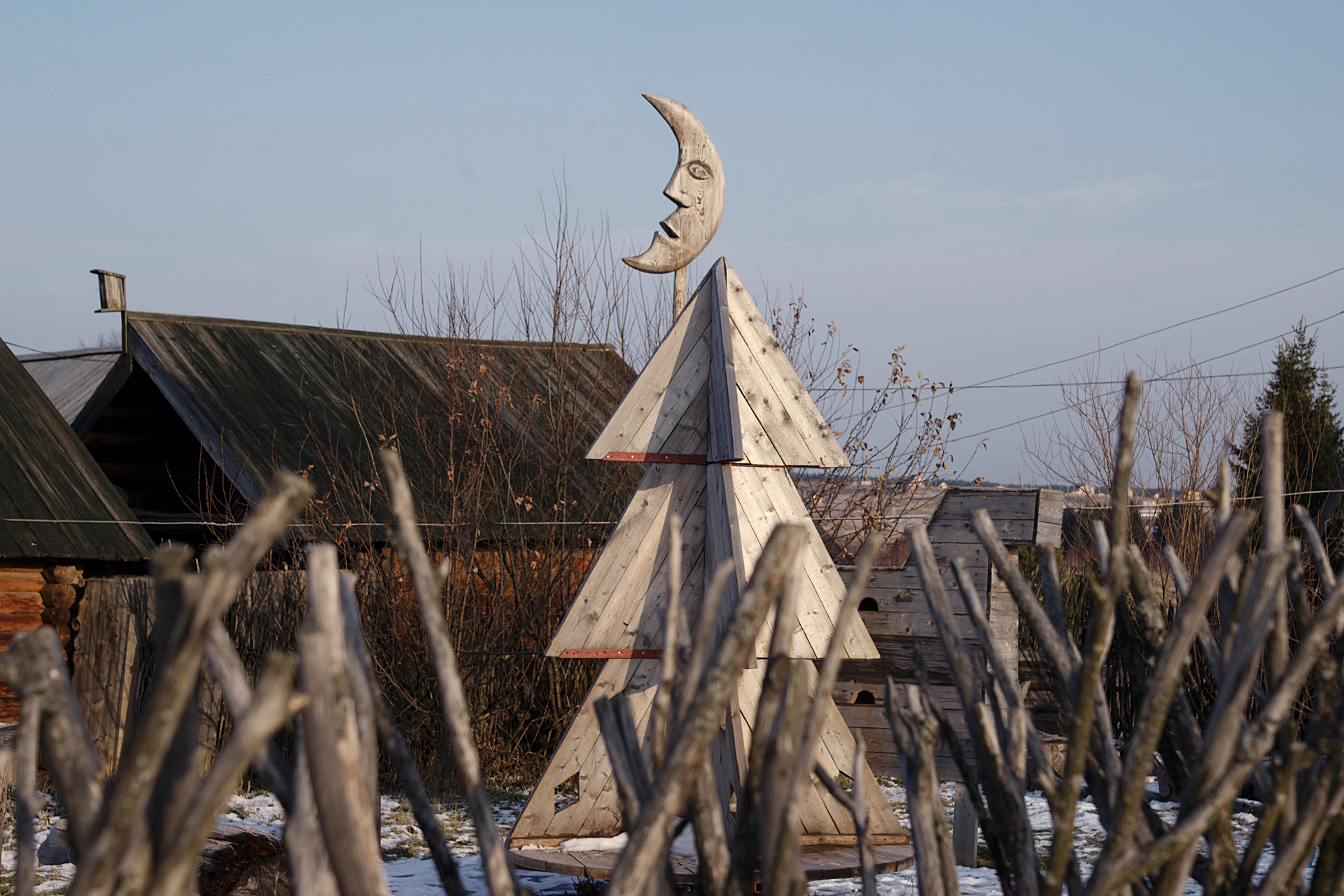 "Every Udmurt in his or her soul is a pagan".

People in every village remember how the Udmurts accepted Christianity. However, while some like to speak about it, others prefer to keep silent. The methods were not always clean. But according to Oduvanchik-Svetlana theory, faith is genetic. It can neither be sold nor changed. The Udmurts were called “the people of the forest,” and so they remained. The Udmurt language does not even have the word “city.” The closest word is , which translates as .

“We are not a rebellious people, we are not categorical. We can be very indignant inside, but we will not openly rebel. We swallow everything. ‘Just as long as no one touches us.’ Everything is done in a silent manner.”

This is basically how Udmurts entered Russia at the end of the 15th century. If this can be called “entering.” Unlike the neighboring Tatars, they had never had their own state. The people lived in small settlements and never had any governmental ambitions.

Then the Udmurts became ashamed of themselves… 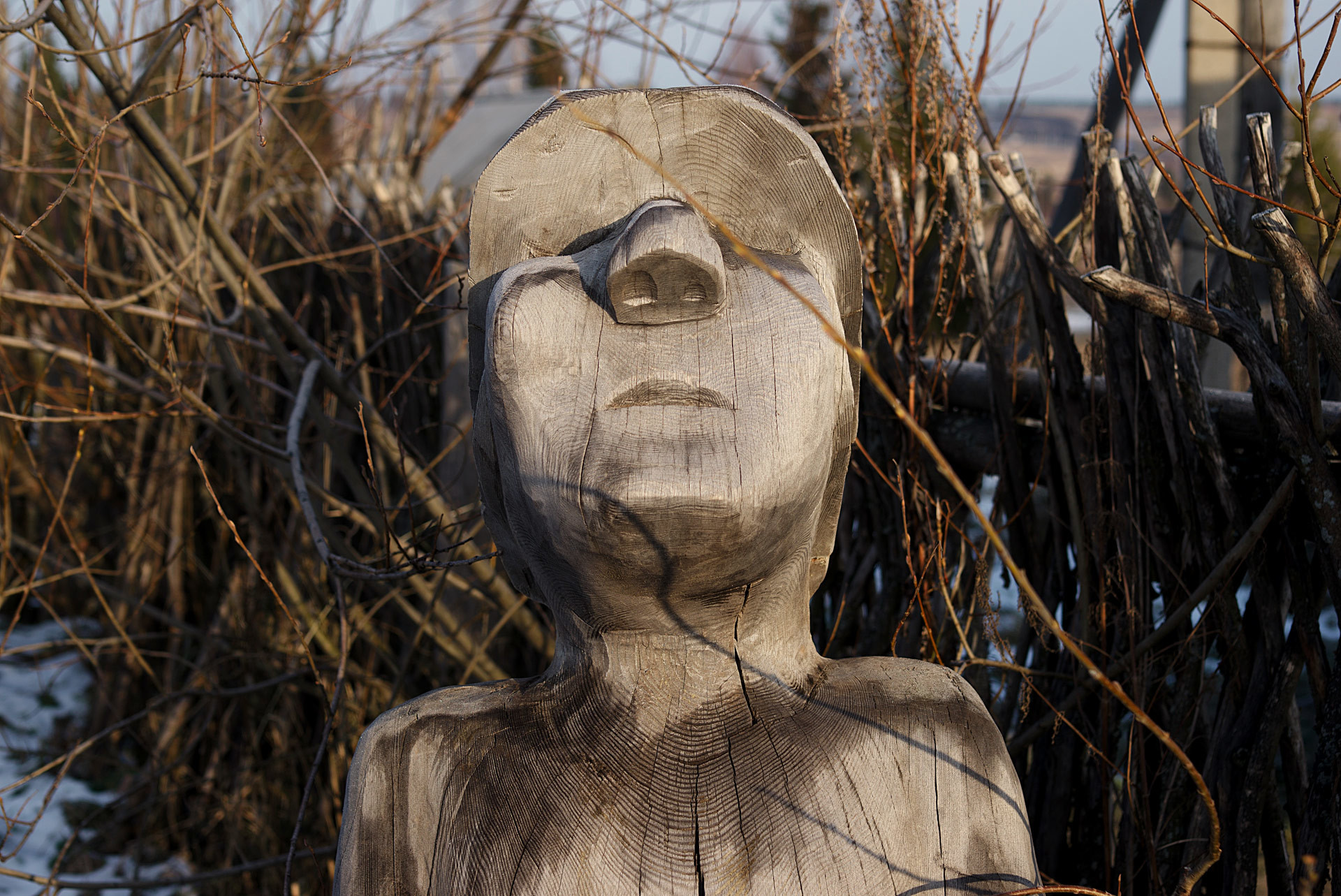 In 1960 70 percent of the Karamas-Pelga village was pagan.

“Being an Udmurt means being…”

“Being an Udmurt means being limited, narrow-minded,” explains Nikita, who lives in the Udmurtia capital of Izhevsk. This thinking comes from the Soviet past when Udmurtia became one of the country’s industrial capitals and Udmurts, as an uneducated village people, became synonymous with unskilled laborers.

“Today people speak openly about their origins, but before, you would have surely heard people say, ‘I’m not an Udmurt, I am Russian.’ since in the passport it is written that they are Russian. When Udmurts received their passports, which was only in the second half of the 1970s, they only had one choice. Or better, there was no choice.” 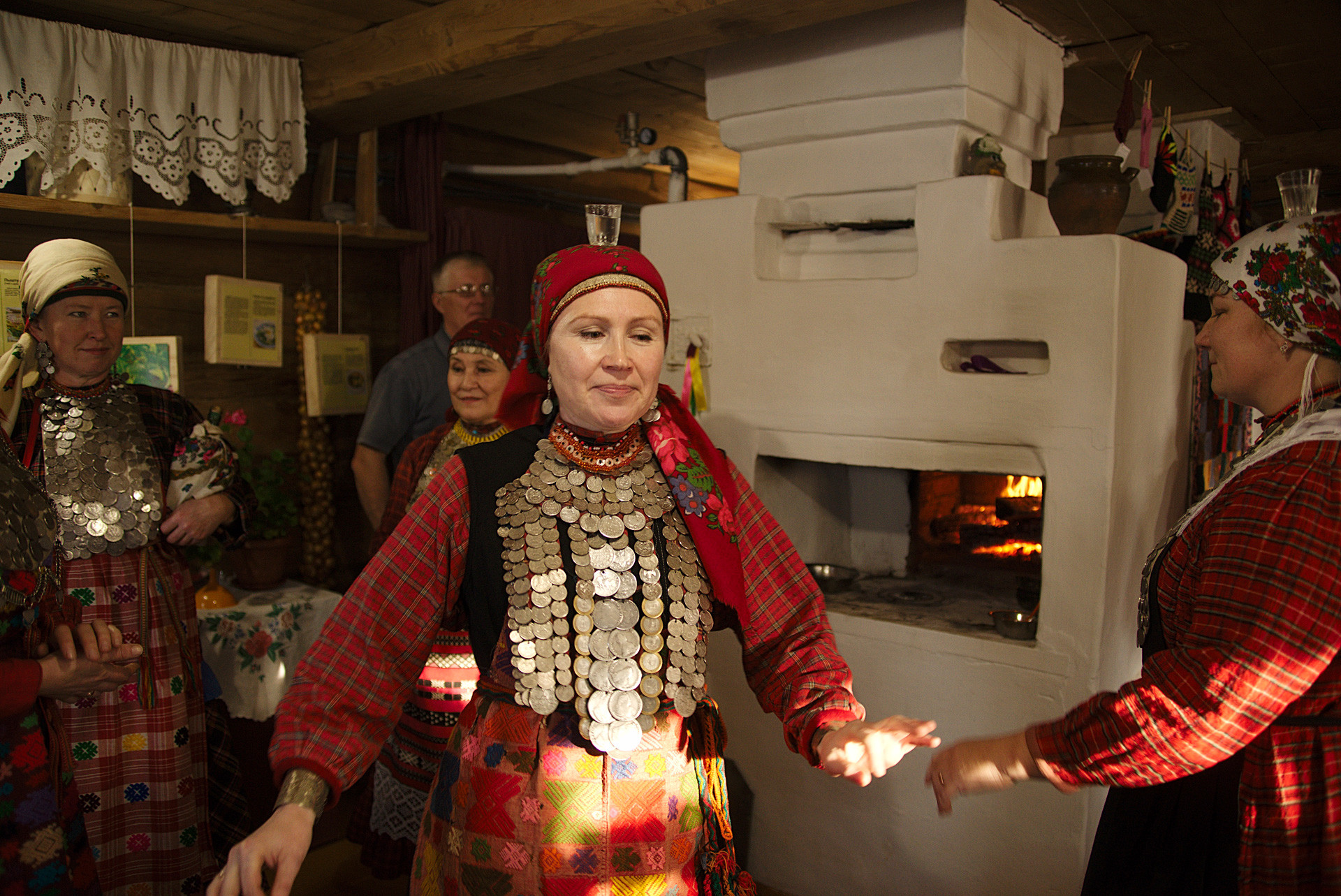 “Today people speak openly about their origins, but before, you would have surely heard people say, ‘I’m not an Udmurt, I am Russian.’

Nikita’s acquaintance is slightly over 30. In her Udmurt family she did not hear much of the Udmurt language, therefore she does not understand her native tongue. The language is not taught in schools (only in some village schools), it is not heard on the streets and not seen on the signs. “Udmurts are modest people. Imposing something is not in their mentality,” notes Nadya, who for the last 15 years has been taking tourists to Udmurtia, showing them the people’s ethnic character, something that the Republic decided to promote to attract tourists.

Yet, there is a theory that this “modesty” also comes from being ashamed of the origins. Only now has national pride begun to show itself. Especially in the comic books, as strange as this is. Comic books written in the Udmurt language is the new trend. 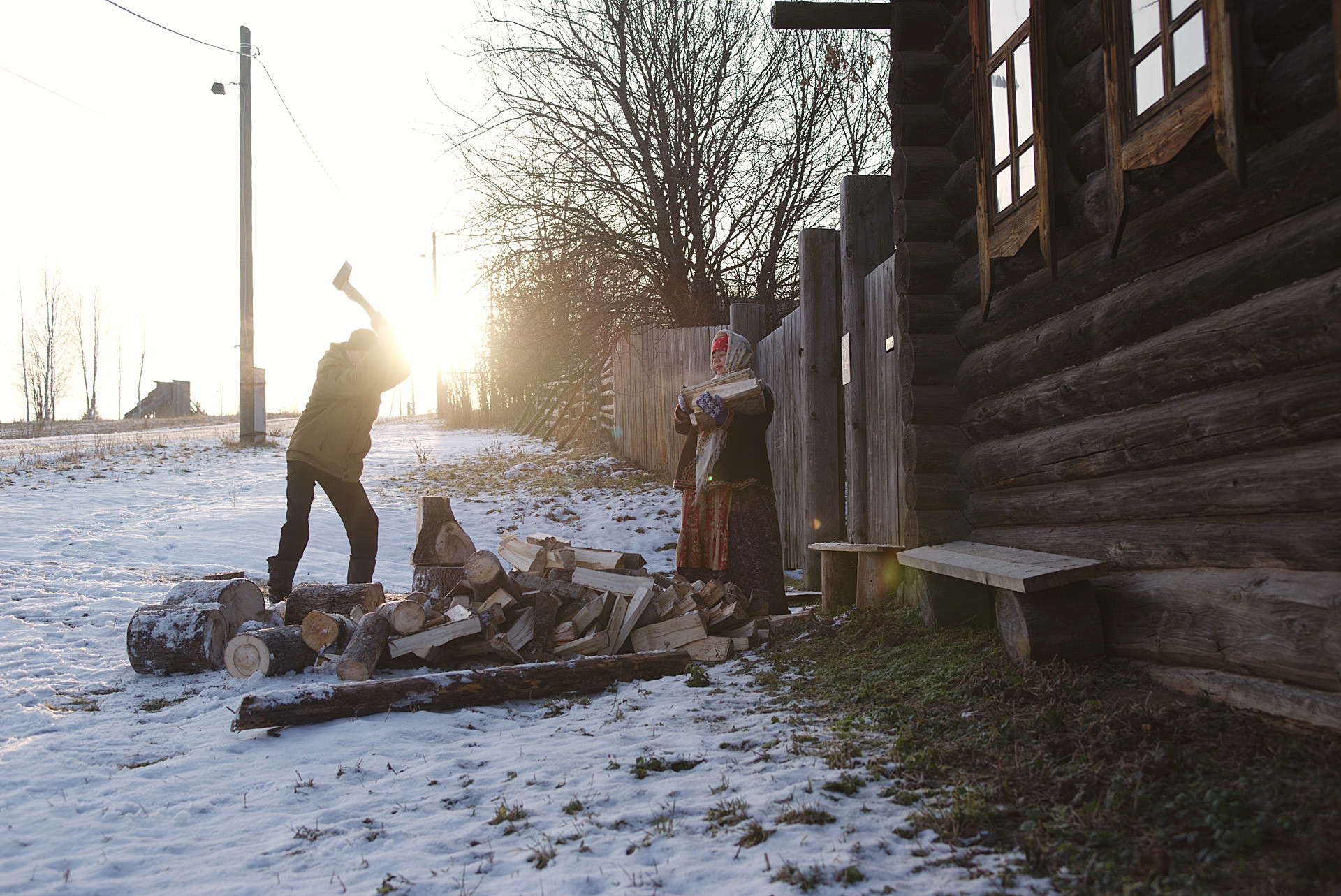 Some people live in villages that are 100 km away from the city.

Today the city is practically the only source of money. The Ludorvai village has gas, a school a library, but there is still no store, clinic or even a pharmacy. That is why they even make their own bread, says Anna Stepanovna.

In 1960 70 percent of the -Pelga village was pagan. She can still remember how everyone in the village stood out on the field with their hands thrown up towards the sky. Then she was betrothed to someone she did not know and he took her to Ludorvai. 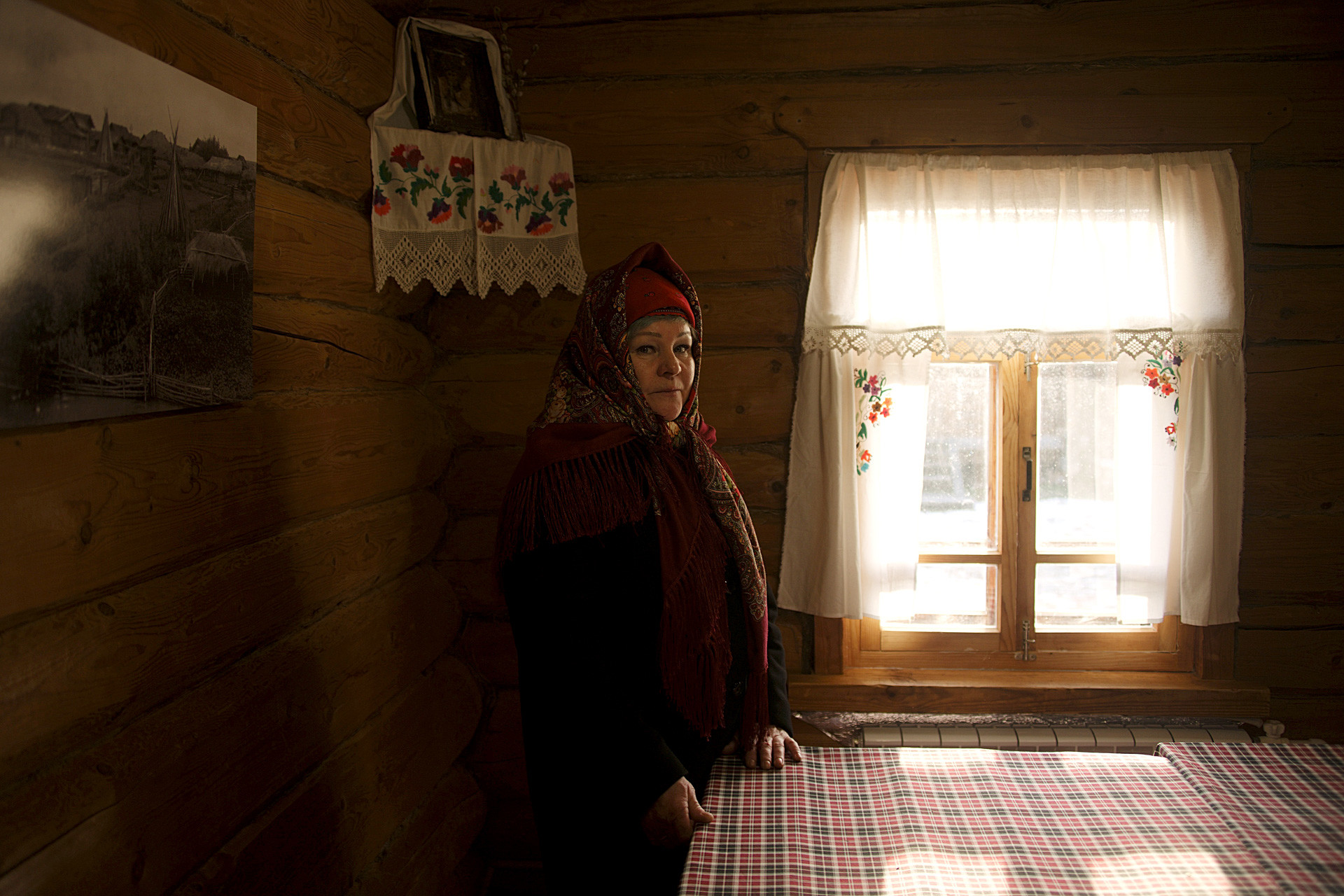 “I did not know my husband. I had seen him only a couple of times and never thought that I would marry him. But that is how it was done before. Today no, obviously…”

Today slightly over 1,000 people live in Ludorvai. The nearest city, Izhevsk, is 19 km away. Anna Stepanovna works in the museum with Oduvanchik. Before, they would walk three km to work, in any weather. Now they ride.

“All Ludorvai residents worked at the factories in Izhevsk, while Ludorvai had enormous fields and kolkhozes (the Soviet collective farms). Today there are no kolkhozes, only private farms. There is work but there are few workers. Some people live in villages that are 100 km away from the city. They just live there without ever going anywhere else. The houses are wooden, they have their own farms. Some people sell berries, depending on the season, others sell wood. The young people move out. They return to see their parents only on the weekends. There is basically nothing to do there.” 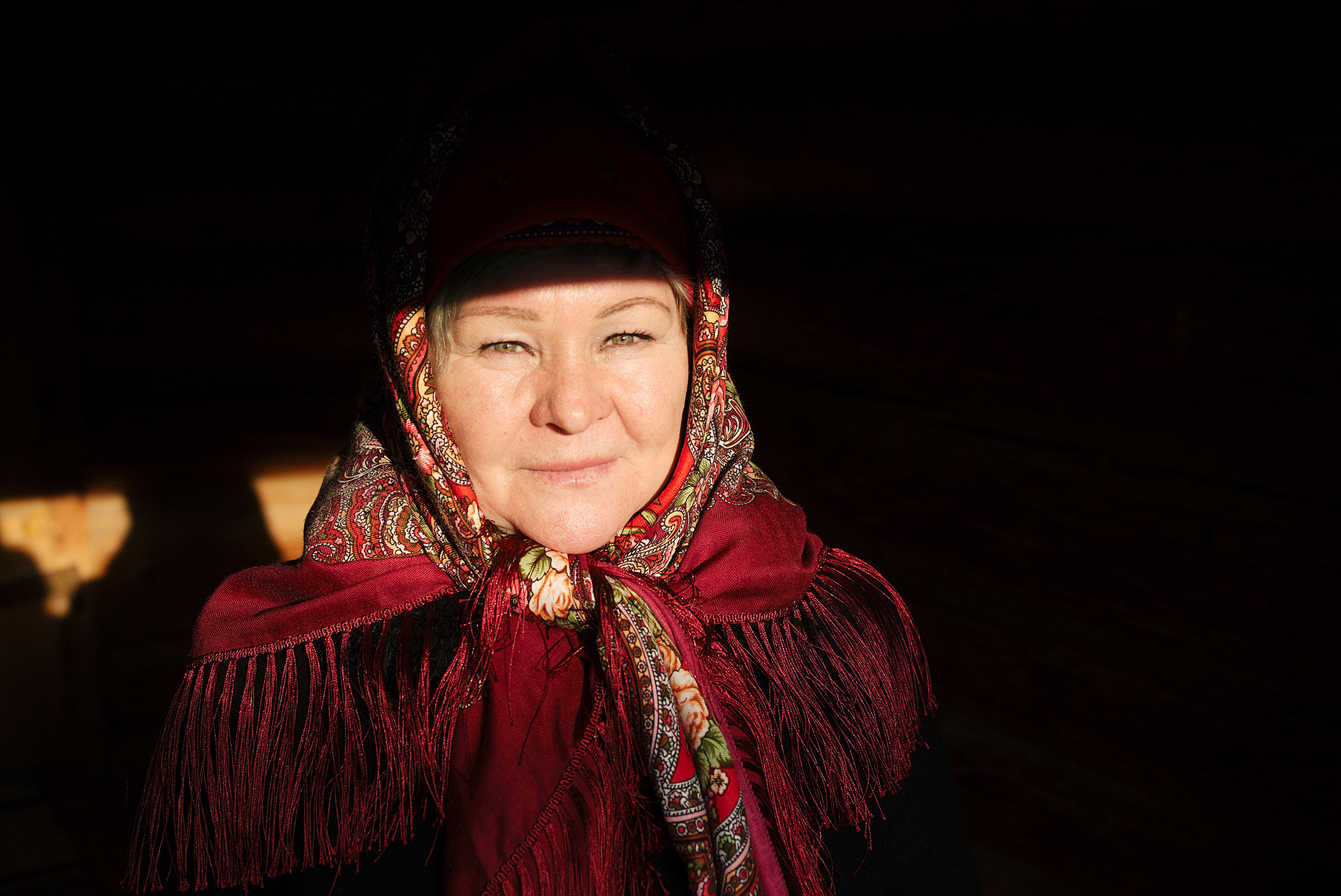 Anna Stepanovna works in the museum with Oduvanchik. Before, they would walk three km to work, in any weather. Now they ride.

Most of the Udmurts, having overcome the “dark people” stereotype, work in the factories, just like half a century ago. Incidentally, weapons. Half of the Izhevsk factories produce weapons (including the Kalashnikov Corporation). They still remember the 1993 New York Times caricature: Udmurtia covered with weapons and a caption reading that if it separates from Russia, the republic will be able to fight the whole world by itself for three years.

But Udmurts are feared not because of the weapons. There is a popular rumor that they are sorcerers.

“They are shamans. They conducted healing ceremonies.”

“Shamanism has not disappeared. There were definitely some healing ceremonies.”

Anna Stepanovna’s voice becomes serious and deep. Her eyes are green, penetrating, intelligent. There was a story: A director of a kolkhoz floated a praying Kuala izba on a river and died a few days later. Perhaps it was a coincidence, but they say the Udmurts are capable of this. 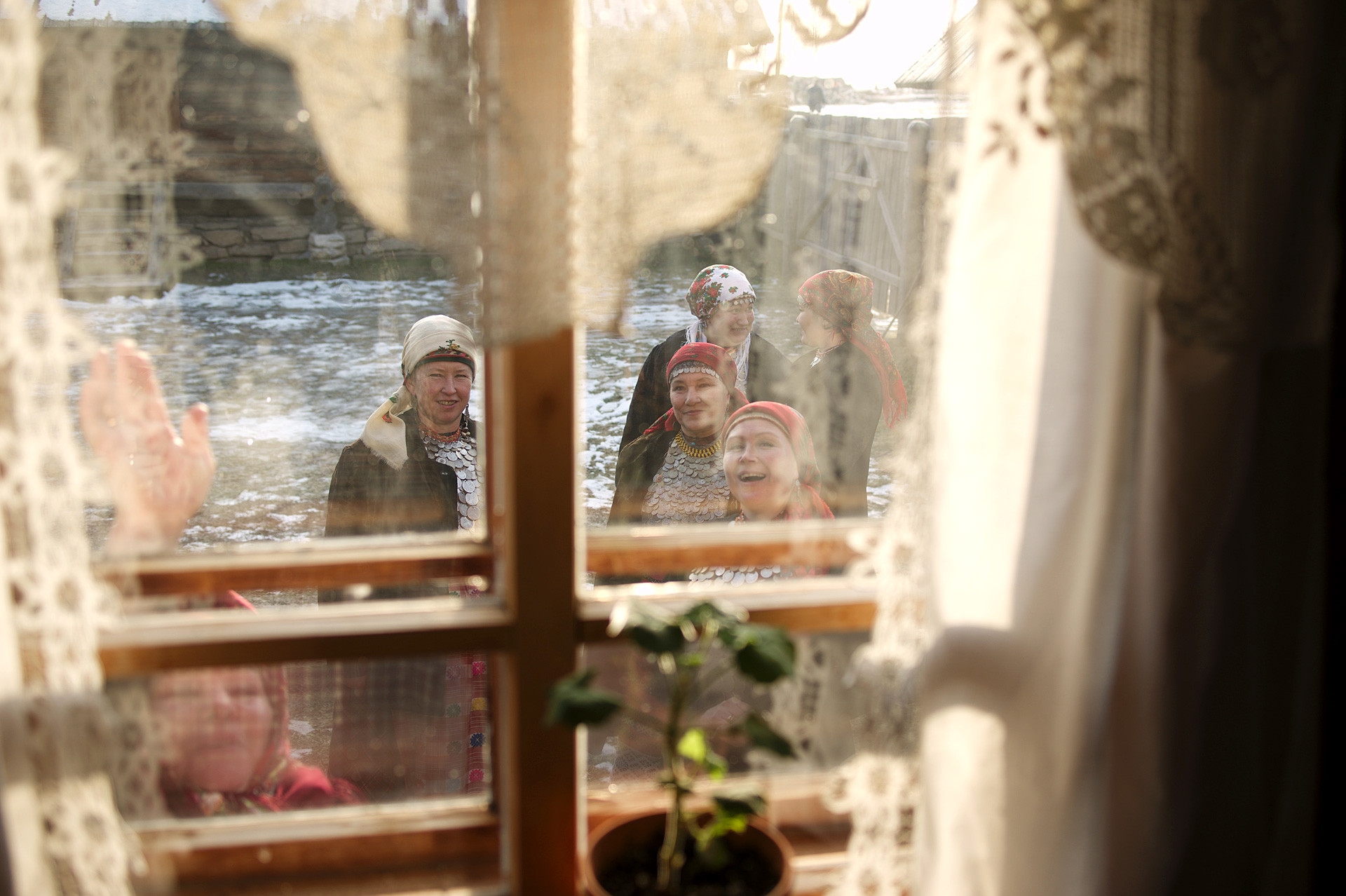