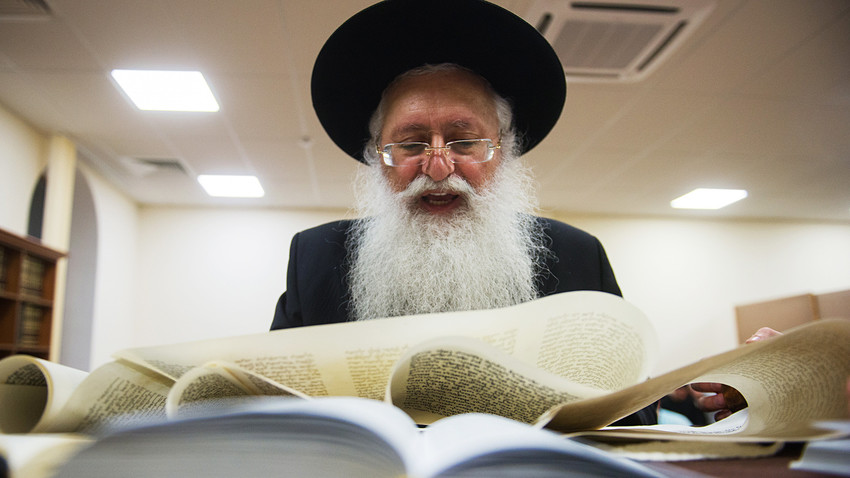 Pyatigorsk chief rabbi Mikhael Khananashvili reading the Book of Esther during celebrations of the Jewish holiday of Purim in a synagogue.

Anton Podgaiko/TASS
Russian Jews are now free to pray, but years of semi-illegal status have left its mark. Did oppression and isolation from their culture serve to unite Russian Jews in Soviet times? And how do their kids respond today to Judaism?

Every spring, young rabbis and yeshiva students travel to different Russian towns and cities that have no rabbis. Their task is to conduct the Seder, a festive ritual meal that celebrates Passover, the feast of freedom commemorating the exodus from Egypt. The Seder takes place twice - on the first and the second night of Passover. 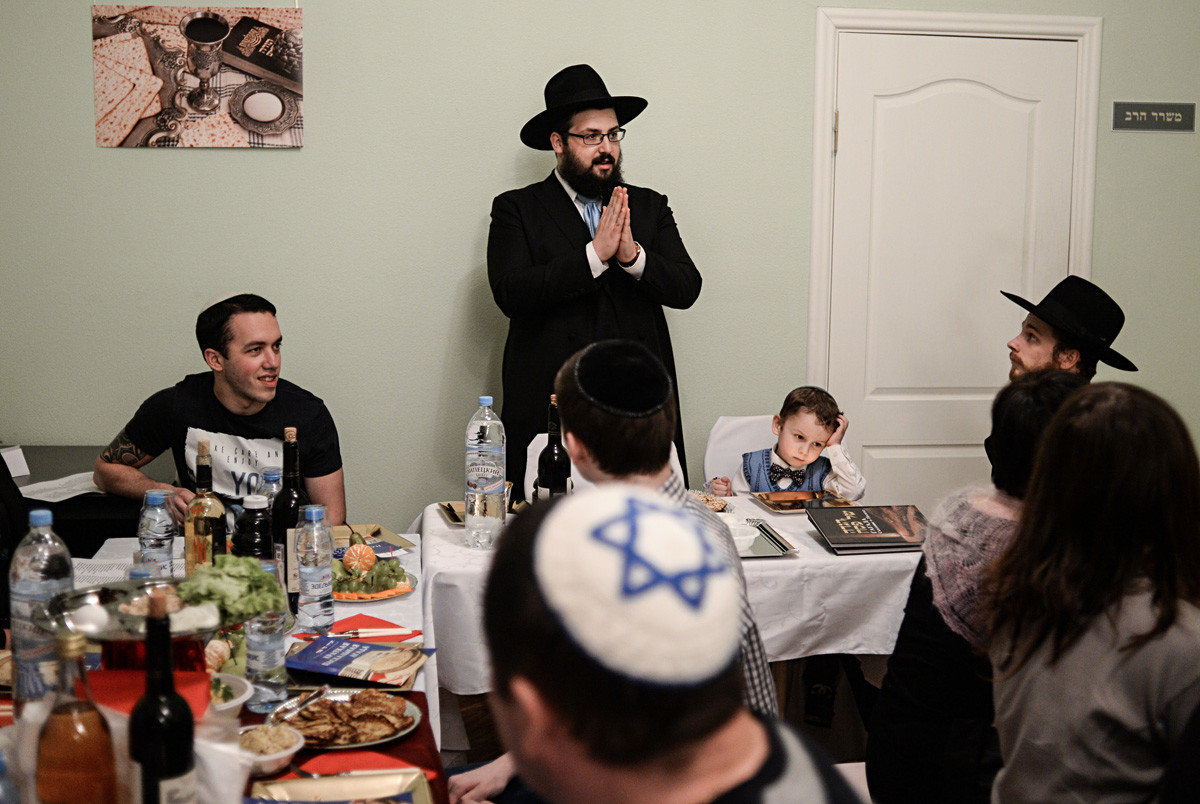 Members of a Jewish community during a ritual family meal on the Pesach Seder holiday in Veliky Novgorod.

Yes, rabbis can’t be found in every town – that’s a peculiarity of Russia’s Jewish community that distinguishes it from those in other countries.

“In New York, on one hand, there is a massive Orthodox Jewish community; on the other, a small of people go to synagogue, but are not orthodox. In Russia, it’s the other way around,” said Borukh Gorin, head of public relations for the Federation of Jewish Communities of Russia.

“Most Jews in Russia strayed far from Judaic traditions, and this trend is also recognizable in post-Communist countries such as Hungary or Poland; but it’s uncommon for Europe, where a Jewish community must be Orthodox, or otherwise it assimilates and dies out,” said Gorin, adding that 90 percent of members of Russian Jewish communities are non-religious people, often living in mixed marriages 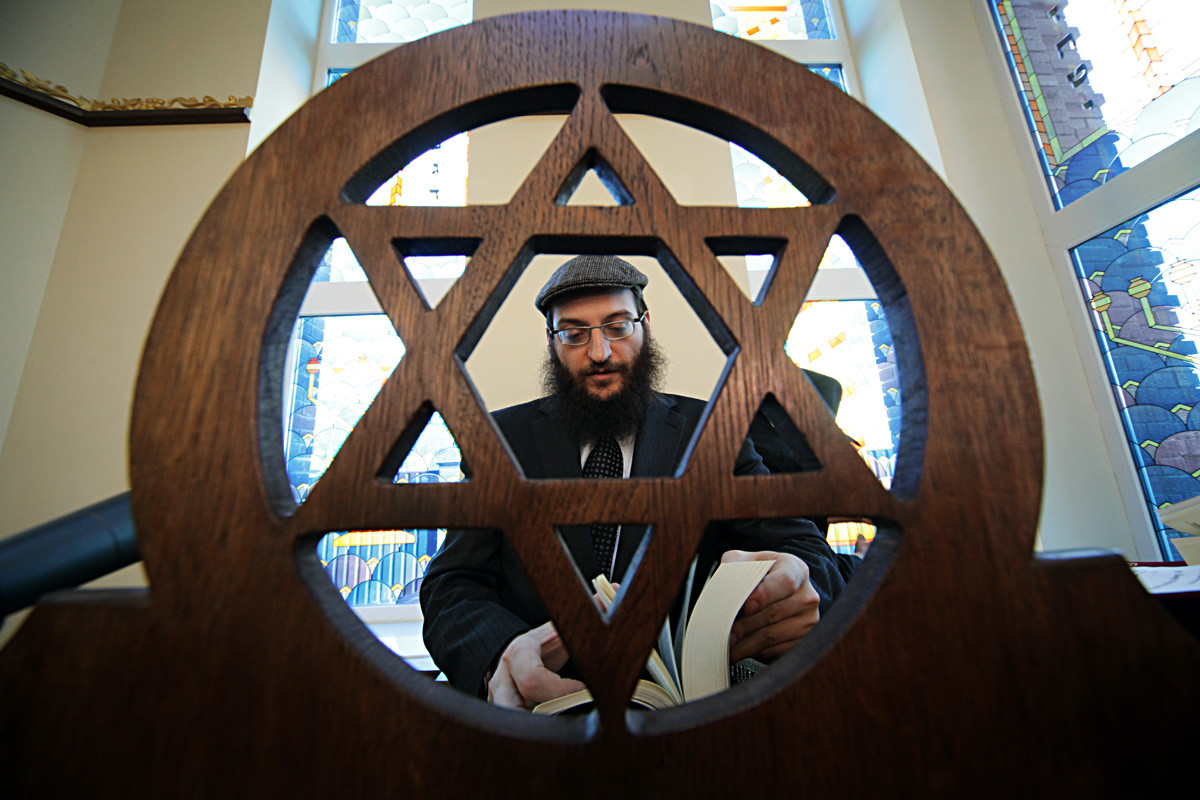 Rabbi Borukh Gorin at the opening of the synagogue in Malakhovka near Moscow after the reconstruction.

, there are no “Jewish quarters” in Russian cities. Instead, there’s a small, 1000-something Jewish community in just about every town and city, often without a synagogue. The reason for this is the peculiar history of Jews in Russia.

Illegal matzo and the ‘Holocaust 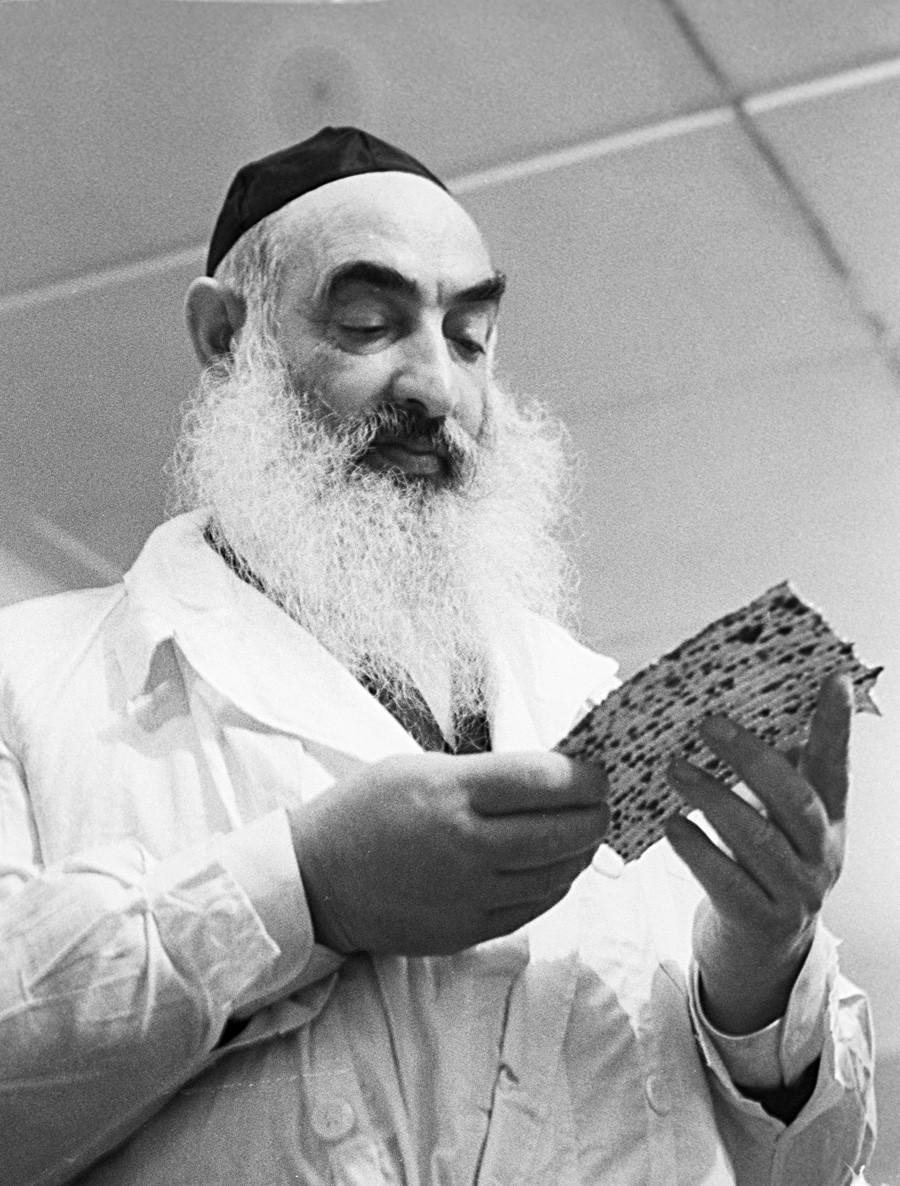 the Revolution, the Orthodox Church, which itself was banned, stopped promoting anti-Semitism. But there was also “economic” anti-Semitism: people saw many Jews in the Soviet elite and thought they were taking the best jobs. This was the most common reason for Soviet anti-Semitic attitudes, says Borukh Gorin.

Many people even tried to conceal their Jewish roots, which again, prevented the formation of a community. Judaism, in general, was not welcome because it was a religion. There was no place in the new order for yeshivas, which were banned. As a result, Soviet Jews could not teach and learn Hebrew systematically. Even traditional Jewish matzo bread, essential for celebrating the Passover, was sold under the counter in Soviet times. Unsurprisingly, this was what kept Jews together in times of repression. 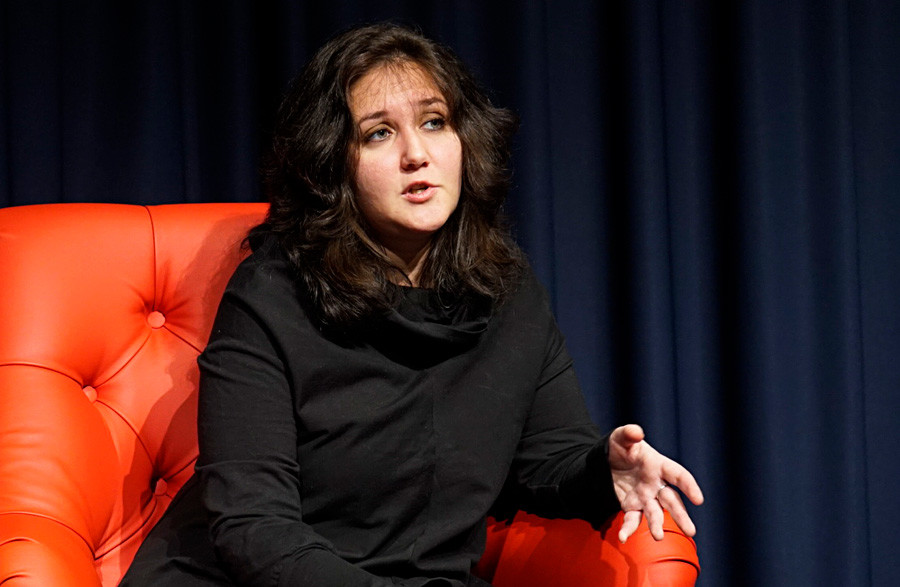 “I think that if there had been no anti-Semitism in the USSR, then there would have been no Jews. We wouldn’t feel different from others,” says Anna Russ, a poet from Kazan (450 miles from Moscow). Borukh Gorin agrees: “Anti-Semitism prevented un-Orthodox Jews from assimilating during Soviet times. . Also, many people felt Jewish as a sign of solidarity with those who perished in the 1930s and 1940s, the so-called ‘Holocaust religion’.”

“My great-great-grandmother perished in Kiev during the war, and not in Yar [a ravine in Kiev that was the site of massacres by German forces during World War II – ed.]. Rather, it was her kindest neighbors who threw her down the stairwell,” said Irina, a middle-aged Jewish woman from Moscow. “How could you forget that you’re Jewish if you know a thing like that?” 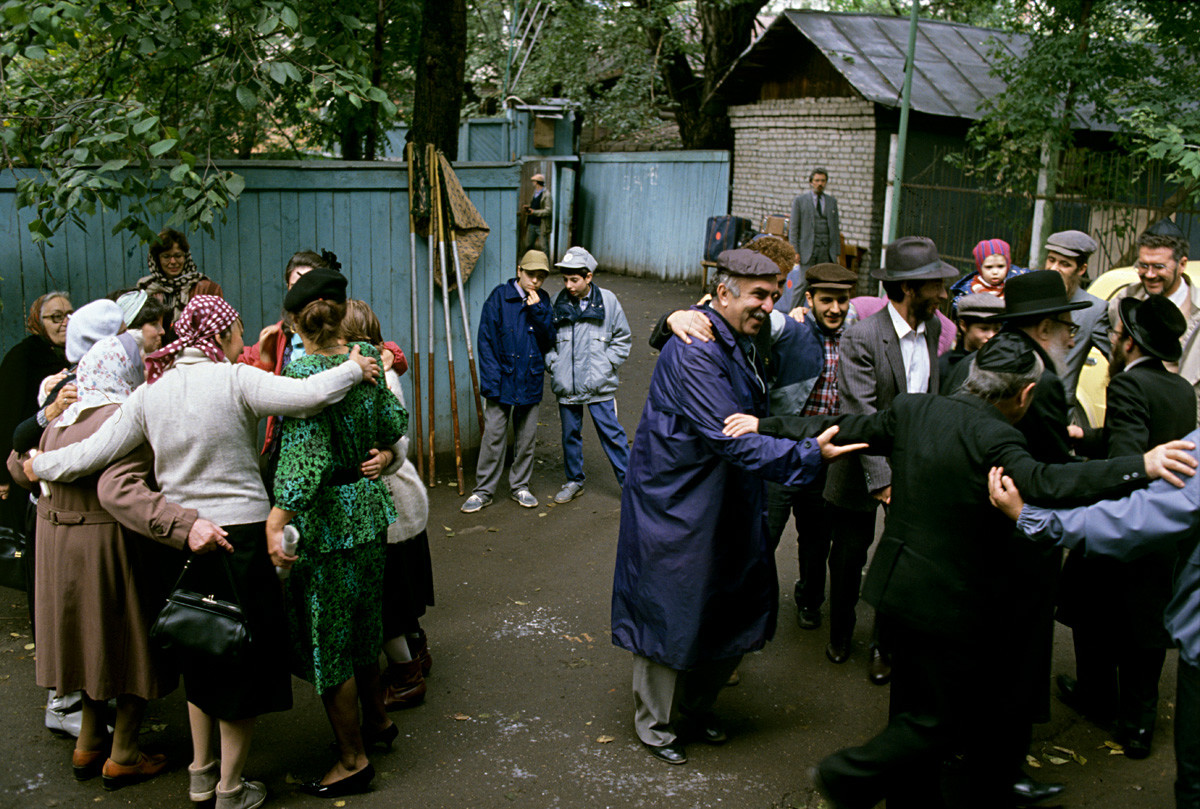 Jews in the USSR. Ceremonial wedding dance performed after the matrimony (hula).

“Anti-Semitism has risen again in some European countries,” Gorin says. “But in Russia, surprisingly, it’s safer for Jews than almost anywhere else. In big cities, young people assimilate by themselves, not because of hardships. They just don’t feel like Jews, until they’re reminded of it in either a positive (like trips to Israel) or negative way.”

During the 1970s, over 100,000 Soviet Jews emigrated to Israel. After 1989, that figure was over 1 million. At the same time, organizations like Agency for Israel (HaSochnut ) or Hillel International began promoting Jewish culture in Russia.

“Judaism came into our along with HaSochnut and Hillel, the beginning of the 1990s,” Russ recalls. “Habad started sending us rabbis. I learned about the Holocaust for the first time when I was 13, in a camp.” 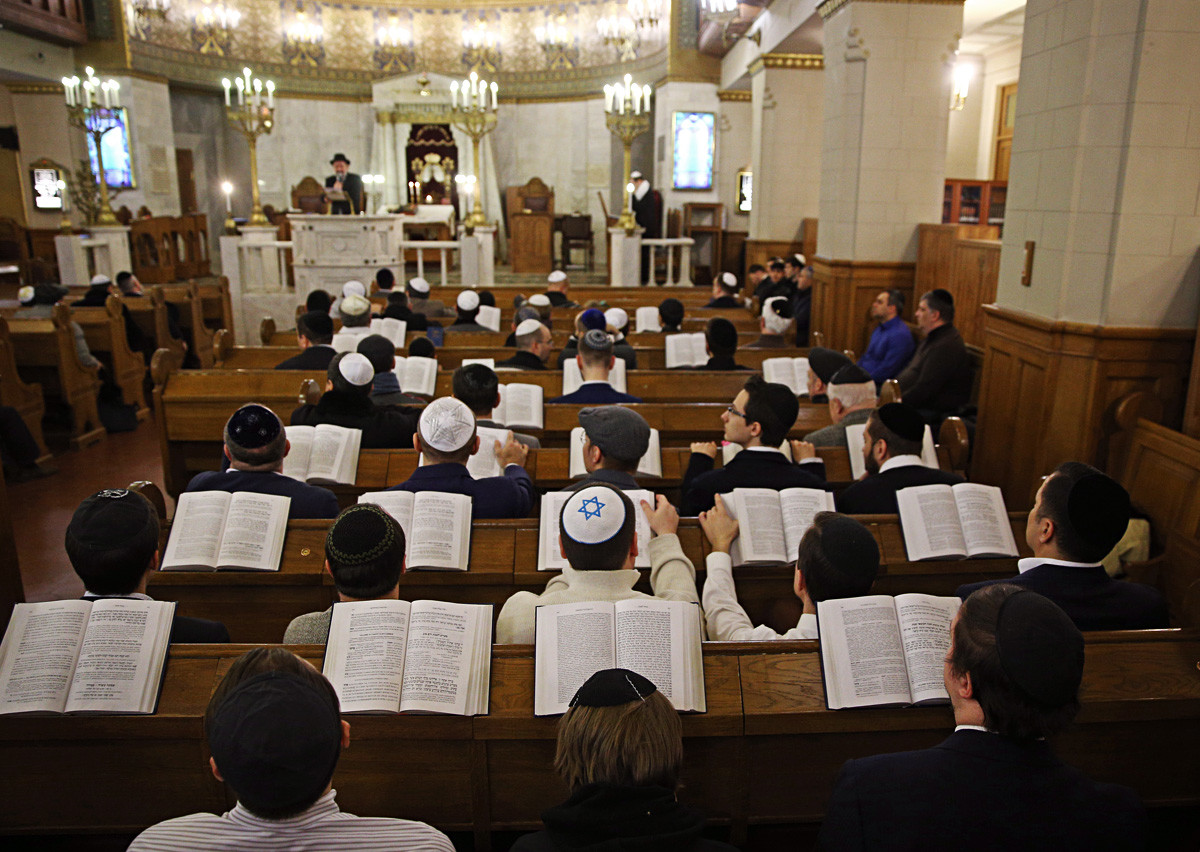 Jews read the Torah as they attend celebrations of the Passover at the Moscow Choral Synagogue in Bolshoi Spasogolenishchevsky Lane, 2018.

Gorin says that in the 1990s most Jewish people under 40 decided to stay in Russia – it was their older relatives who left. “This was a time of great opportunities here, young people understood that and stayed. The core of the contemporary Jewish community are people who were in their teens when the Union crumbled. They used their opportunities to the fullest.”

But Hillel and HaSochnut didn’t propagate emigration as its goal, Irina says. “We must maintain our Jewish life here,” she emphasizes. “Even if a person doesn’t go to synagogue every day, he has his ties with the past.”

Anna says she was afraid of emigrating because of the language: “I thought I’ll lose everything in a foreign culture. I didn’t even think of the Naale program. And now, I’m convincing my daughter to try it. I think you can’t be a Jew and not treat Judaism with the utmost respect.”