10 expressions to transform you into a true Russian 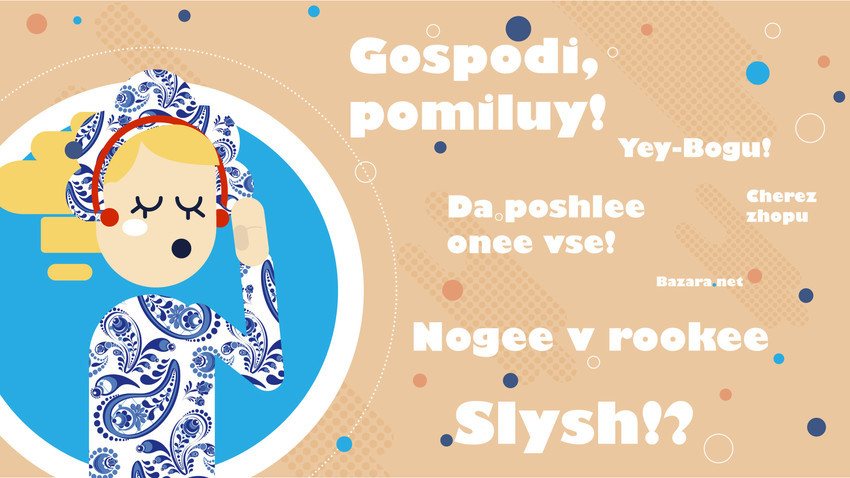 Freepik, Alexandr Kislov
Never underestimate the usefulness of local knowledge. These expressions will ensure your place as one of the group when you’re impressing your Russian friends with slang that goes far beyond what you’ll pick up from a textbook.

Roughly translated as “through the ass/out the ass,” the phrase implies doing something in a backward, cumbersome manner, when it would’ve been easier to do it the way people normally do, and possibly with much less effort.

You can use the phrase in a number of ways - such as when there are three cashiers and only one till, or when a car is made in such a way you need to switch off the engine before you can get Bluetooth to respond.

The phrase can likewise be used in more complex situations, such as with Brexit or attempted regime change in Syria. Remember to exaggeratedly facepalm or shake your head pensively and bawl your eyes out in an expression of disbelief as you discuss foreign intervention in the Middle East: “Oni vsyo delayut cherez zhopu!” or – “Everything they do comes out the ass!”

This is a relatively harmless amplification that is also universal and applicable to just about any situation to describe dismay. “Yey-Bogu” can figuratively be translated as “I mean – come on!”; “Really?!”; “Bloody hell!”; or “for God’s sake!” – from “Bogu” signifying “to the glory of God” (Bog).

Now take a seat and watch us get bonus points by professionally tying it in with the first phrase on the list: “Yey-Bogu, vsyo delayut cherez zhopu!” (“Everything they do comes out their ass, for God’s sake!”).

“God forgive” – a powerful expression used by just about anyone in Russia: believers –- when they see a UFO and begin to try and pray it away; ordinary people witnessing a terrible or fantastical event; and again – in conjunction with the first two phrases on our list.

The closest meaning to this in English is “don’t hold your breath,” but where the English version is more of a recommendation, the Russian one – meaning “keep holding your pockets wide” – is Russian for good reason: it just assumes that everybody wants to get the best deal for themselves, and will stoop to any lows, even ridiculous requests that nobody would satisfy. You usually use the phrase to let the other person know that you’re onto them.

A universal phrase that signifies bitter sarcasm at being asked a difficult favor… or something you’re just too lazy to do. Roughly translated as “...and is there anything else you'd like?” Remember to gaze directly into the eyes of the other person with an expression of sarcastic, unflinching disdain.

There’s no less than a dozen ways to make this phrase sound better, but we’ll get in trouble for using colorful language, so it’s the PG-13 version… just in case you’re a 13-year-old who terribly needs to use the phrase “To hell with all of them!”

Use every day: when gossipping about work, the government, or filthy enemies of the Russian state (wink-wink).

Roughly translated as “I don’t give a damn,” you can use a different emphasis, depending on whom you’re talking to. “Naplevat’’ means “to spit”; ‘nasrat’’ is “to crap”; and – most interesting – “fioletovo,” which is the color violet. The word “gluboko” means “deep/deeply,” which is cool, because in the first two versions you’re “deeply” not caring, whereas “fioletovo” was born later as a pun on “deeply,” signifying depth of color.

We like this absolutely untranslatable way of getting somebody to hurry the hell up: “[take your] legs in [your] hands.” This is usually used by sadistic parents in a paternalistic tone, or when psyching yourself before a tough trip or mission.

For creative use, combine that with no.5. Or, just use as a standalone expression in more straightforward cases. “Slysh” is the incorrect spelling of “slyshish” – or “you hear?!”, but is actually closer to "what the hell?". It is used to denote incredulity at someone’s cheek e.g. when they tell you to do something that offends your entire being – usually in situations where you’re talking to a friend.

Slysh is used for both emphasis and confirmation. Figuratively, it is closer to “Are you out of your mind?” but more in the sense of your significant other hogging the blanket at night – i.e. “Hey! I was using that too!”

It would be pretty funny to just translate this directly: “no bazaar.” Bazaar in Russian is basically a slang term for “lively discussion” (or any kind, really) – as you would see at an open market, for instance.

“Bez bazara”, in this sense, means “no further questions/no problem then” – if you are agreeing to somebody’s request for something. You would use it as a sort of “of course” or, more specifically, “that goes without saying.”

But you wouldn’t use it if it’s your turn to run down to the store for more beers. It is best to reserve it for situations when you’re going slightly above and beyond the call of duty. You’re reassuring the other person that there won’t be any issues.

This is another big favorite with the author of this text. It’s unclear to probably half the nation why “cheaply and angrily” is a phrase to denote something that is both, useful and worth every penny. However, the “angrily” could possibly be swapped for “rugged/ruggedly” to make more sense.

Very often we will use this phrase at a cheap restaurant – but one that gets the job done and won’t give you salmonella in the process. In other words – “no frills.”