Moscow’s only Museum of Prostitution is actually a toilet?! 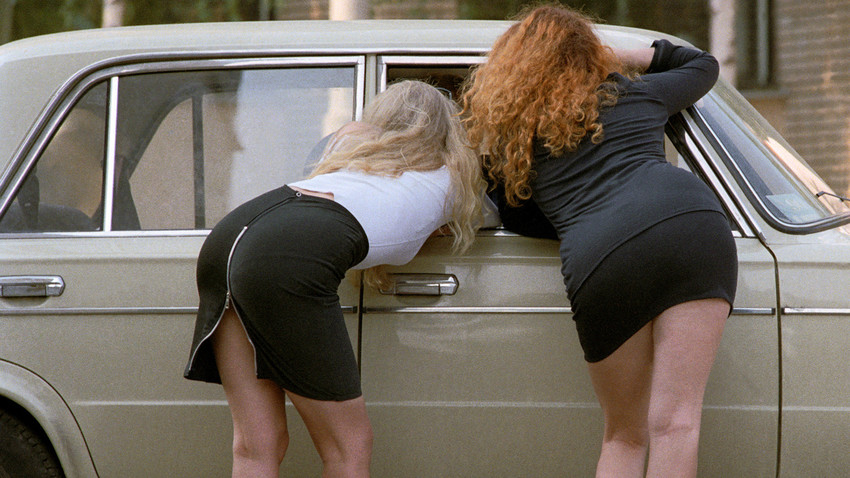 Valery Khristoforov/TASS
The recently opened Moscow museum of prostition, situated at Old Arbat, has caused a stir - to put it lightly. The religious, the communists, LGBT activists and their rivals, lawmakers, Arbat-dwellers - all of them were ready to ransack the risque establishment. I headed out there to see what all the fuss was about.

Finding this new cultural spot on one of Moscow’s most famous pedestrian streets proved easier said than done. A mixture of shop fronts, colorful souvenir spots, walking human ads and all manner of restaurants look designed to make you lose your path. The spot that your mobile app leads you to is instead occupied by a lonely and shivering street vendor of ushankas, nesting dolls and Lenin (and Trump, for some reason) statuettes.

Suddenly, my path is blocked by an actual knight in shining armor, who was there for the tourists’ benefit, getting them to part with their cash for a photo. After snagging a cigarette from me, he explained that the prostitution museum was downstairs in the basement - “see that glass door, right next to that hairy dude…”.

“The hairy dude” was the museum’s director Valeriy Pereverzov, who indeed fit the description, complete with a bushy beard. He was just finishing up with the previous (visibly impressed) group. As I took the stairs down, I remember hearing “Cool”, “Awesome” and “Not bad”. The actual museum found a home inside the WC of yet another of Pereverzov’s establishments - the Museum of Corporal Punishment, which opened doors eight years ago. 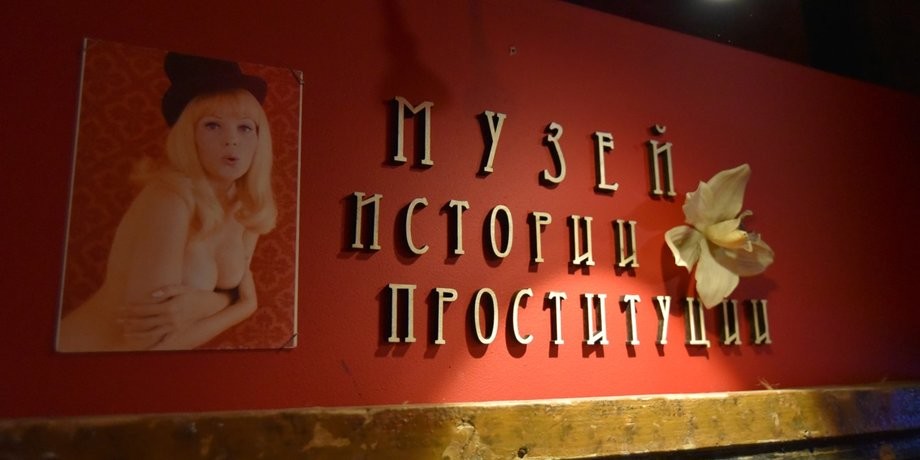 Pereverzov dutifully unhooked the red barrier rope, and I was let in. Immediately I was surrounded by pre-war contraceptives, bras and panties and other things, producing a sigh of excitement within me.

In preparation for the trip I read every communist-penned review of the “tasteless vulgarity” I could get my hands on, and pictured myself walking around, throwing highly intelligent or disapproving glances at the items on display. Fortunately, this proved unnecessary - as was walking around: this museum, with its 100 ruble admission fee, occupied such a modest area that your entire movements are restricted to turning 360 degrees on your heels.

The walls are adorned with photographs of 19-20th century prostitutes, books are strewn around the floor, together with bits of doll figures. The shelves are littered with various knick knacks, while a red toilet seat for some reason has a male chastity belt hanging over it. A palm tree protrudes from beneath.

I had time to survey my surroundings three times while the owner was finishing up an excited discussion with friends, involving a night out that turned bloody and included skinheads.

“Yes, indeed. This is a bathroom, with bathroom art,” he responds, explaining the concept.

“Wait - so is this the whole exhibit?”, I ask in bewilderment.

“Any person that wanders in here must feel a sense of being cheated. What do you mean by your ‘is this the whole exhibit’? That’s the whole point of prostitution,” Pereverzov continued his speech, with extreme visible confidence in his remarks. According to him, the museum must elicit a sense of filth, awkwardness and shame. 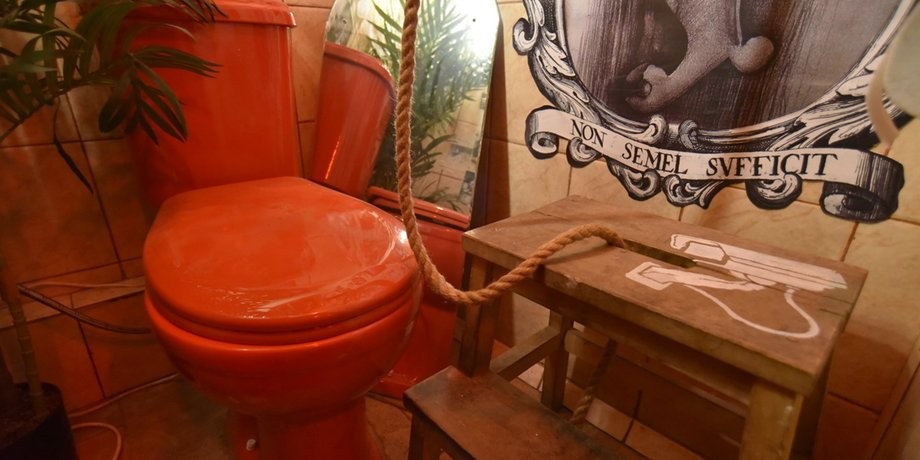 “Any person that wanders in here… - he continued while motioning me to a chair he had just sat in. I was suddenly surrounded by drying laundry, with a jar standing nearby, containing what looked like a human body part preserved in alcohol.

“The visitor is supposed to be perplexed by their surroundings - such as asking what kind of freak would sit in this chair - could he be a serial killer, or some other kind of creap? And he was just here moments ago. Similar feelings you get when visiting a prostitute. It’s supposed to feel uncomfortable.”

“Actually, the chair is kind of comfy, and warmer for sure than Arbat,” I protested.

With the introduction over, I asked how long it took Pereverzov to collect his exhibit - at least the part that could be categorized as antique, as opposed to a garage sale. This is where he began slightly dodging my questions, simply replying that he’s “an auctioneer and antique hunter of the old school,” and usually finds everything quickly. He added that he collects peakless caps, but not for exhibition purposes.

Prostitution for the ‘Russian intellectual’

So how did the idea for the prosittion museum materialize - I asked while climbing out of the “serial killer” chair.

“This idea has been long in the making,” he says. “I’ve always known that it would pan out and cause a stir. But I didn’t know how to set it all up. The idea with the bathroom came to me three weeks ago. I suddenly told myself that the exhibit would be… a bathroom. Don’t know why. I immediately sent the idea down the line to the “sanity department” - which is my wife. She said it would look “cool”. 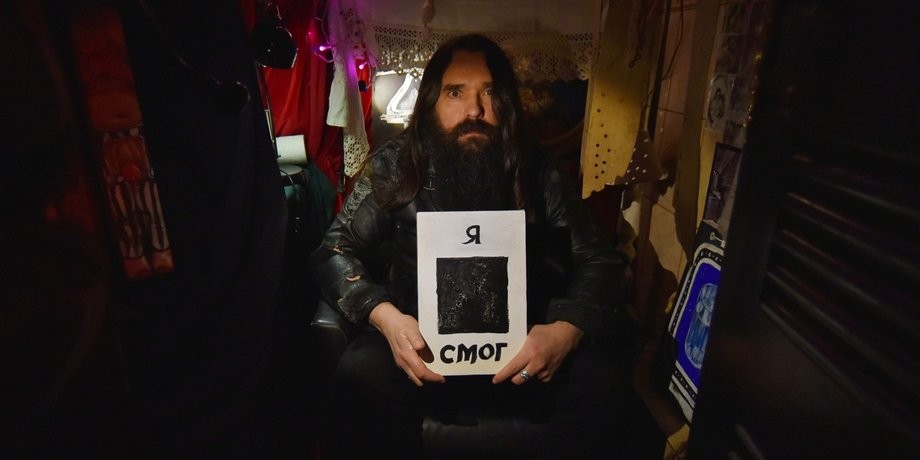 “But you were threatened by Orthodox activists as well. How did you solve the issue?,” I ask, while another happy customer passes us.

“The Christian activists actually showed up today. I told them that the museum will be in a bathroom. This surprised them, as they had already appeared ready ‘to break and destroy everything in sight’”. It ended with us shaking hands, and them wishing us “success”. So it’s all good,” Pereverzov adds.

“And what is the museum’s main target audience?”, I ask.

“Unfortunately, it’s the ‘Russian intellectual’. I say “unfortunately” because it’s such a small crowd,” he says pensively.

Before departing, I wished the owner success and prosperity, the Christian that I am. One thing continued to bother me: do I include myself in this circle of ‘Russian intellectuals’.

By the entrance I saw a group of young men that looked like visitors I’d just seen inside. They turned out to be visitors from Amsterdam. In a passable Russian they’d managed to get across to me that - of course, the sex scene is a little different back home, but this right here is a solid step in the right direction.