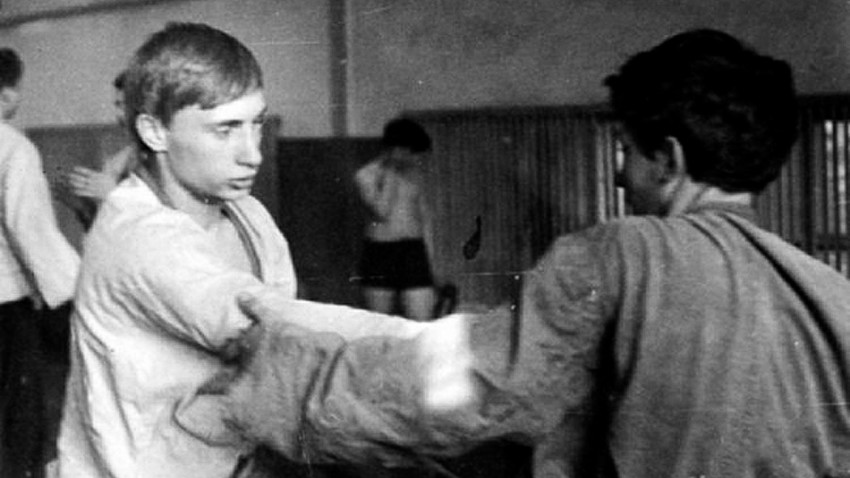 Global Look Press
From his well-known passion for judo and karate to mountain skiing, hiking, and even car racing – the Russian leader is in perfect shape and excels at many sports.

It is a little-known fact that in childhood Vladimir Putin had an aversion to Russian traditional music. His father loved the bayan very much and made young Vladimir play some of his (Putin, Sr.’s) favorite pieces to him. Perhaps that’s why the future president took up instead of music. Anatoliy Rakhlin, Vladimir’s judo coach, later revealed how he had once visited Putin’s home to convince his parents that their son was great at the sport and to reassure them that judo wasn’t dangerous. 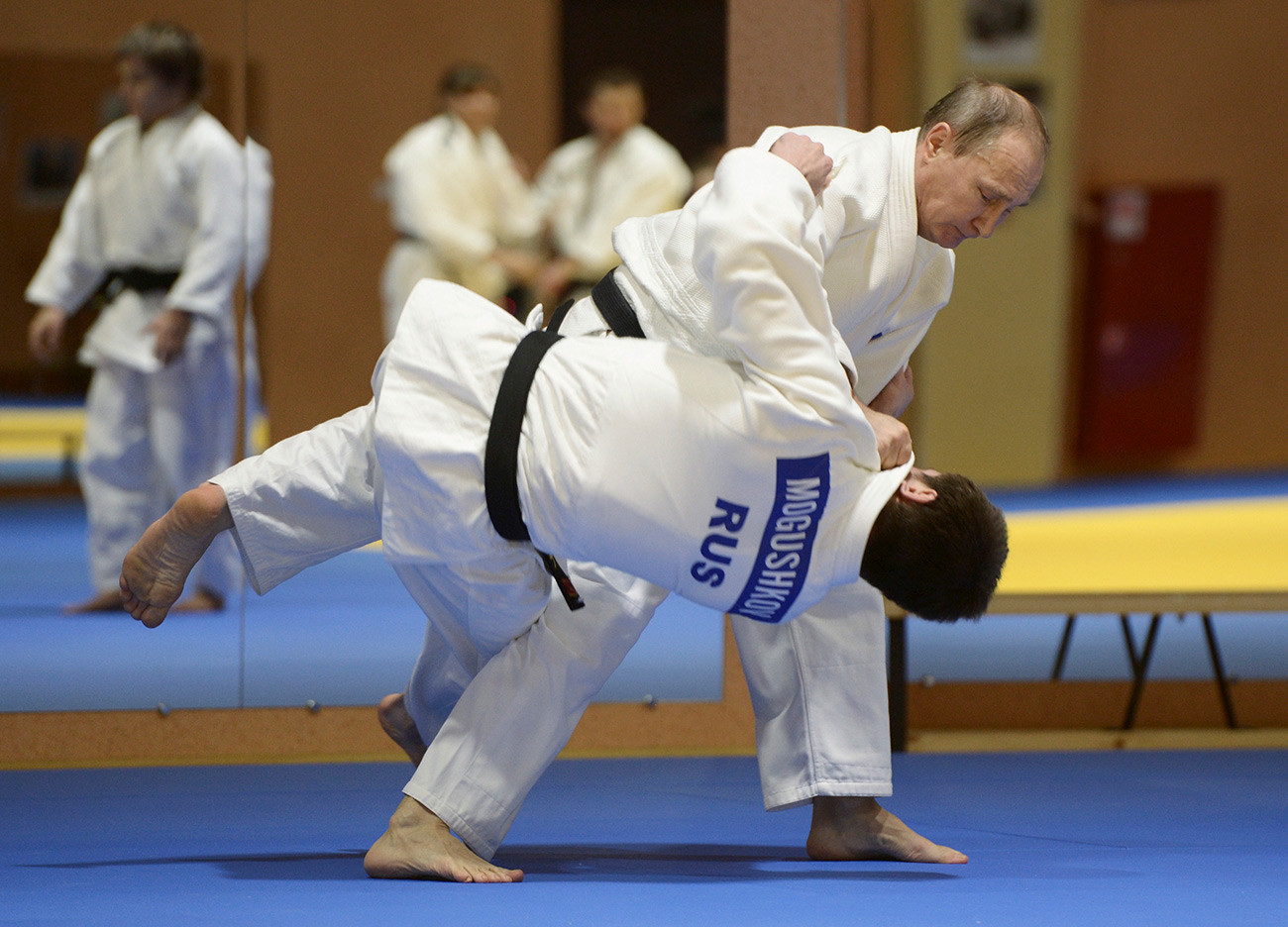 Vladimir Putin began judo classes when he was just eleven. ”When he started training, he didn’t have any talents and didn’t stand out among other students. But with time, he showed impressive results. On the mat, Vladimir was a panther, fighting until the last second,” Rakhlin recalled. Putin’s trademark moves were a throw over the back and a throw while grabbing both of his opponent’s hands 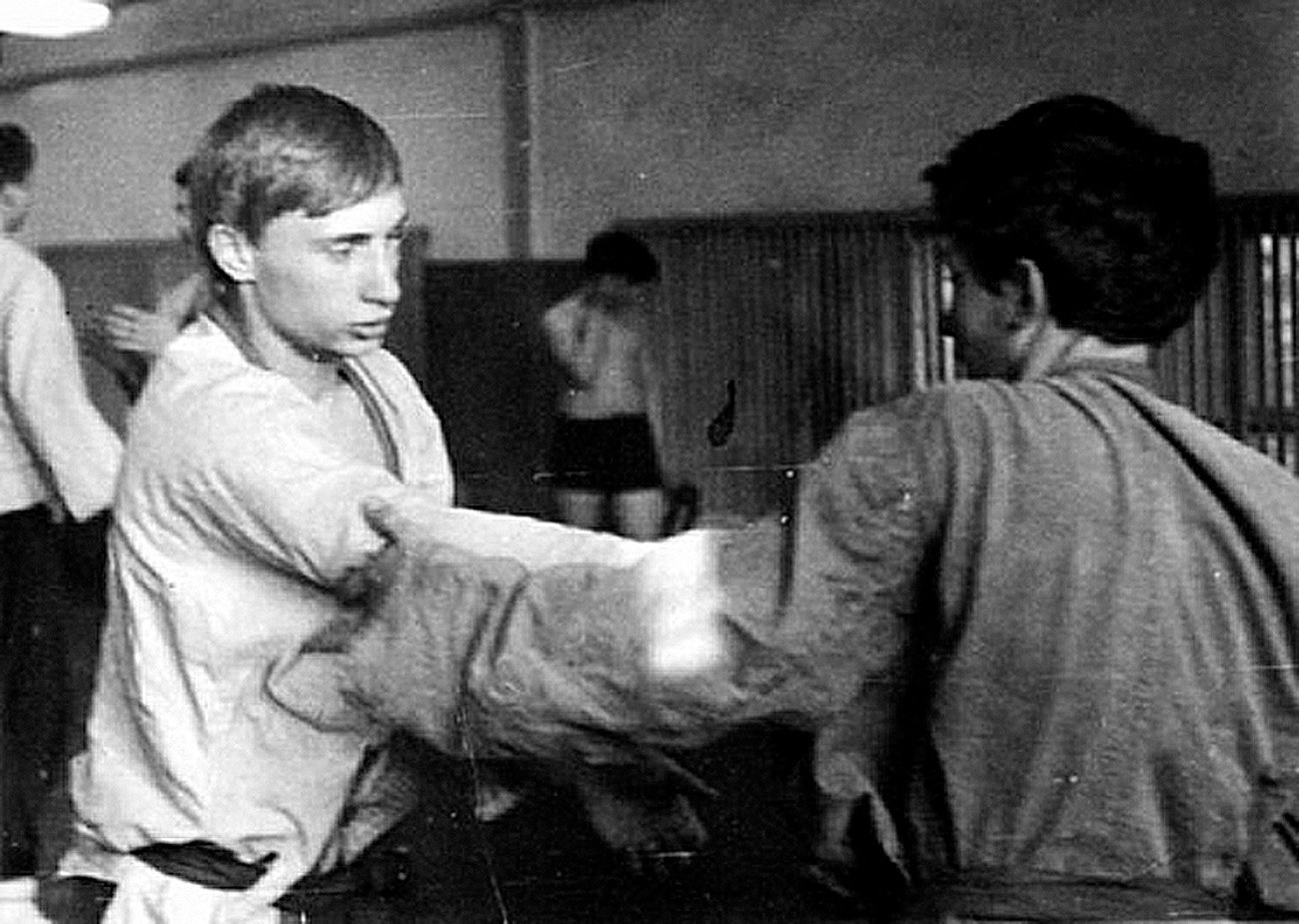 21, Putin became judo champion of Leningrad and received a master’s rank. In 1999, the book Learning Judo with Vladimir Putin came out, and Putin also took part in a tutorial movie on the basics of the sport.

Besides judo, Putin excels at several other martial arts, including karate. In the Kyokushin karate school, Vladimir Putin holds the 8th dan (rank). 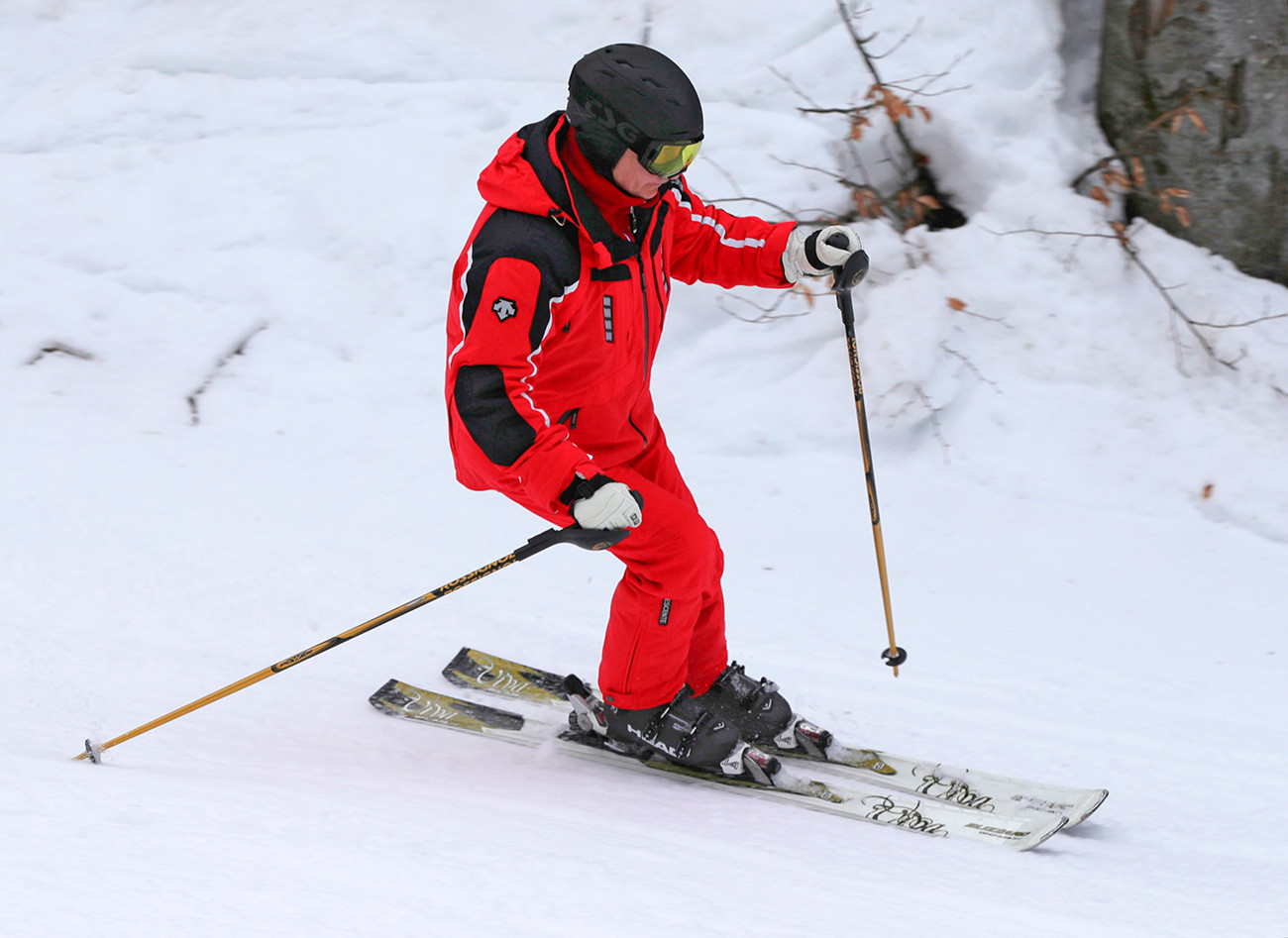 Mountain skiing became another of Vladimir Putin’s favorite sports. His personal coach is Leonid Tyagachev, former president of the Russian Olympic Committee and himself a famous downhill skier.

“Vladimir Putin didn’t go through the usual training course. In the beginning, he kept making the same mistakes. But in two years, we improved his technique. Now it’s solid and he always descends at a very high speed,” Tyagachev says. “We trained at night, on electric-lit courses,” he adds. “Usually we started at midnight and finished by 1 or 2 in the morning. We still train at night frequently.”

Trainers say Putin’s technique is far better than that of the average amateur, but he still has some minor mistakes. But these do not spoil the sheer pleasure of shooting down the piste. 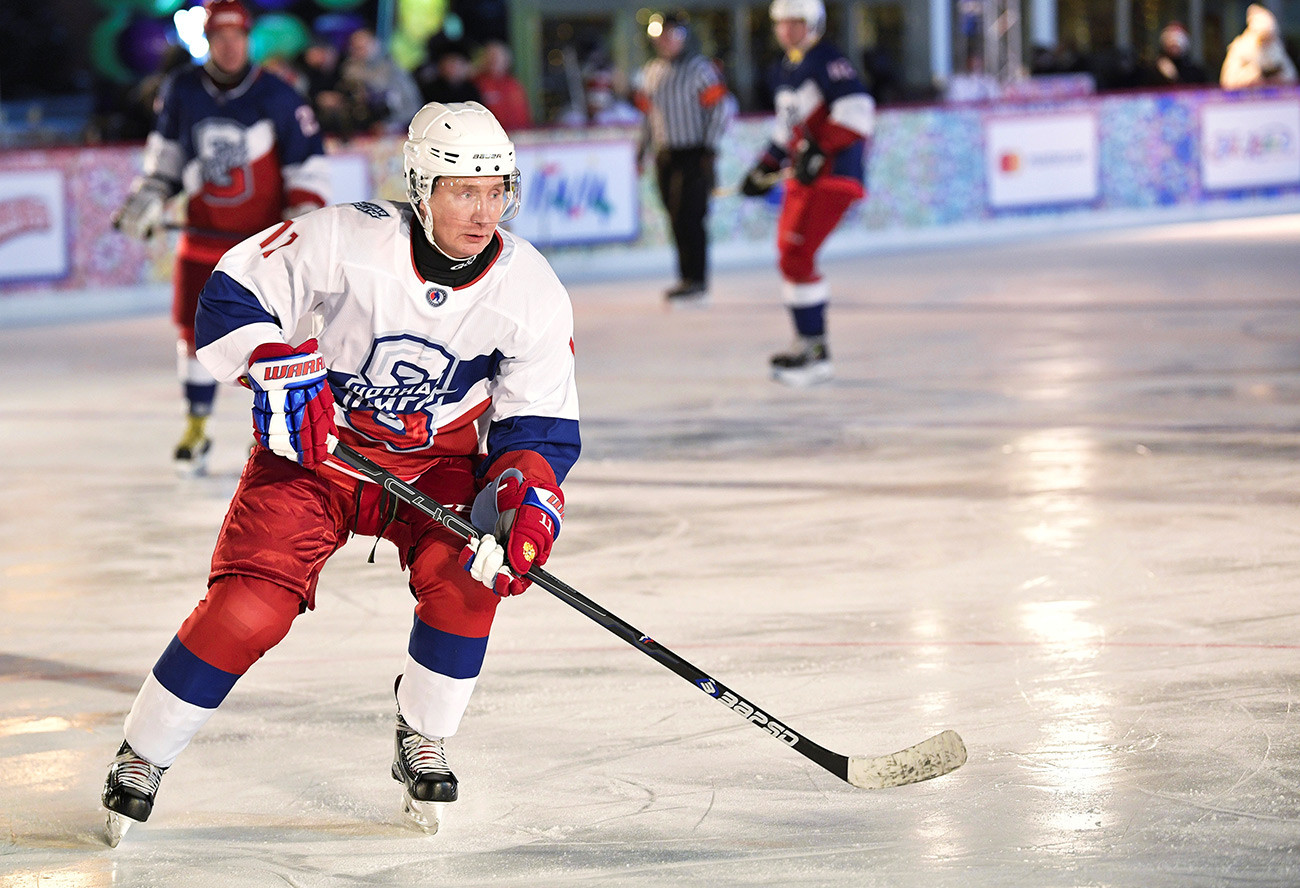 judo, hockey is one of Vladimir Putin’s more recent sporting pastimes. In January 2011, speaking at the XXV Winter Universiade in Turkey, Putin promised a group of young athletes that he would learn skating. “I thought it was just impossible,” the President said. “I tried to learn once, while I was practicing martial arts.”

Famous Russian hockey player and several-time World Cup winner Alexey Kasatonov became Putin’s coach. They practiced at night, just like with skiing. “I had a talk with a 12-year old boy, and he spent nine years practicing. I spent just two months. I learned to skate holding a chair! And before, I didn’t ever skate, I couldn’t even stand on the skates,” Putin confessed.

By April 2011, Putin had learned to skate and play and had even scored a few goals. Putin became a patron for the Russian Night Hockey League, where he is joined by Russian politicians and businessmen to play hockey and raise funds for charity. Putin’s participation motivated many Russian bigwigs to take up hockey. Although, as Night Hockey League member, businessman Oleg Smirnov says, the other players treat Vladimir Putin with kid gloves: “He’s our president, and hockey is a contact sport. So we have to be careful not to cause an injury,” Smirnov said. 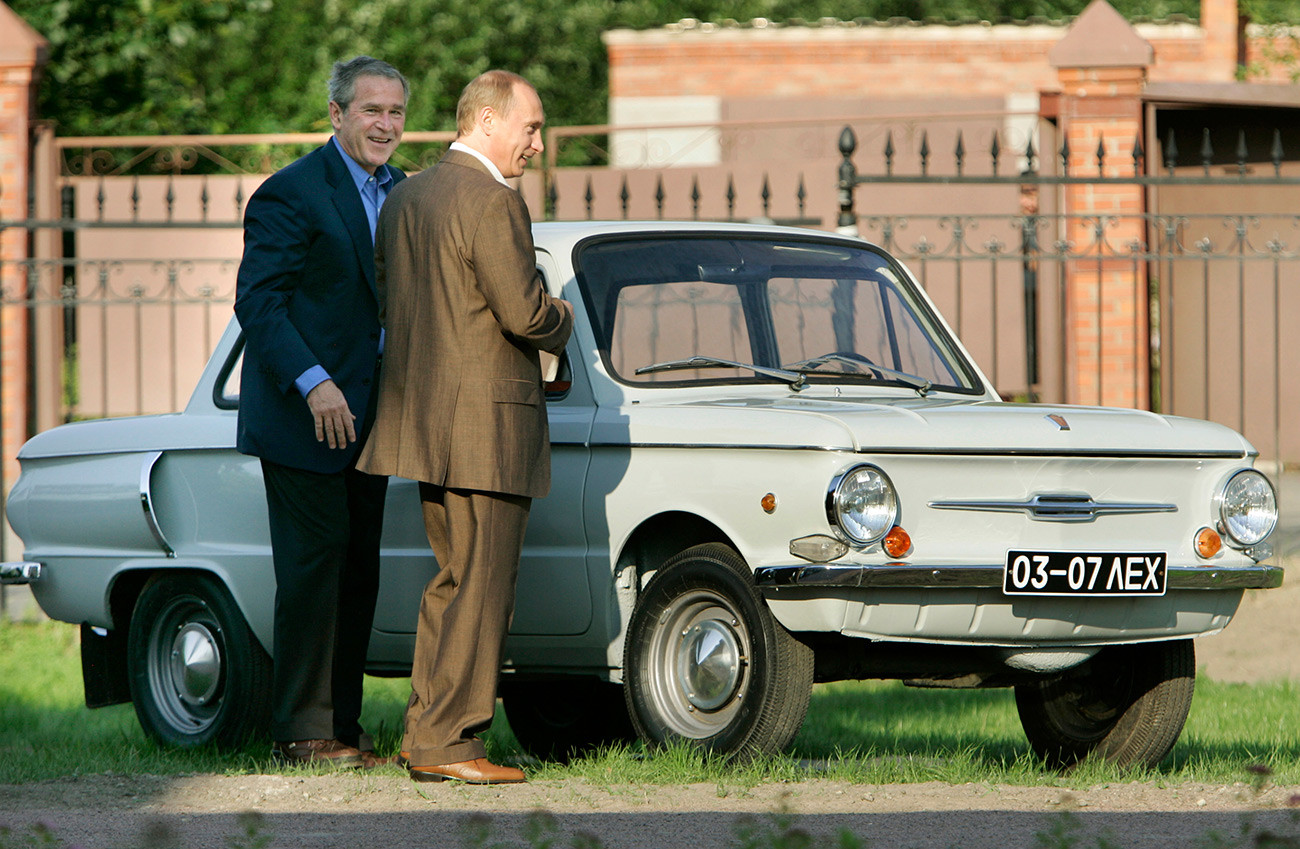 Vladimir Putin’s first car was a clumsy (and unpronounceable) Zaporozhets that his parents won in a lottery. As president, Vladimir Putin switched to more substantial rides, often with a patriotic feel 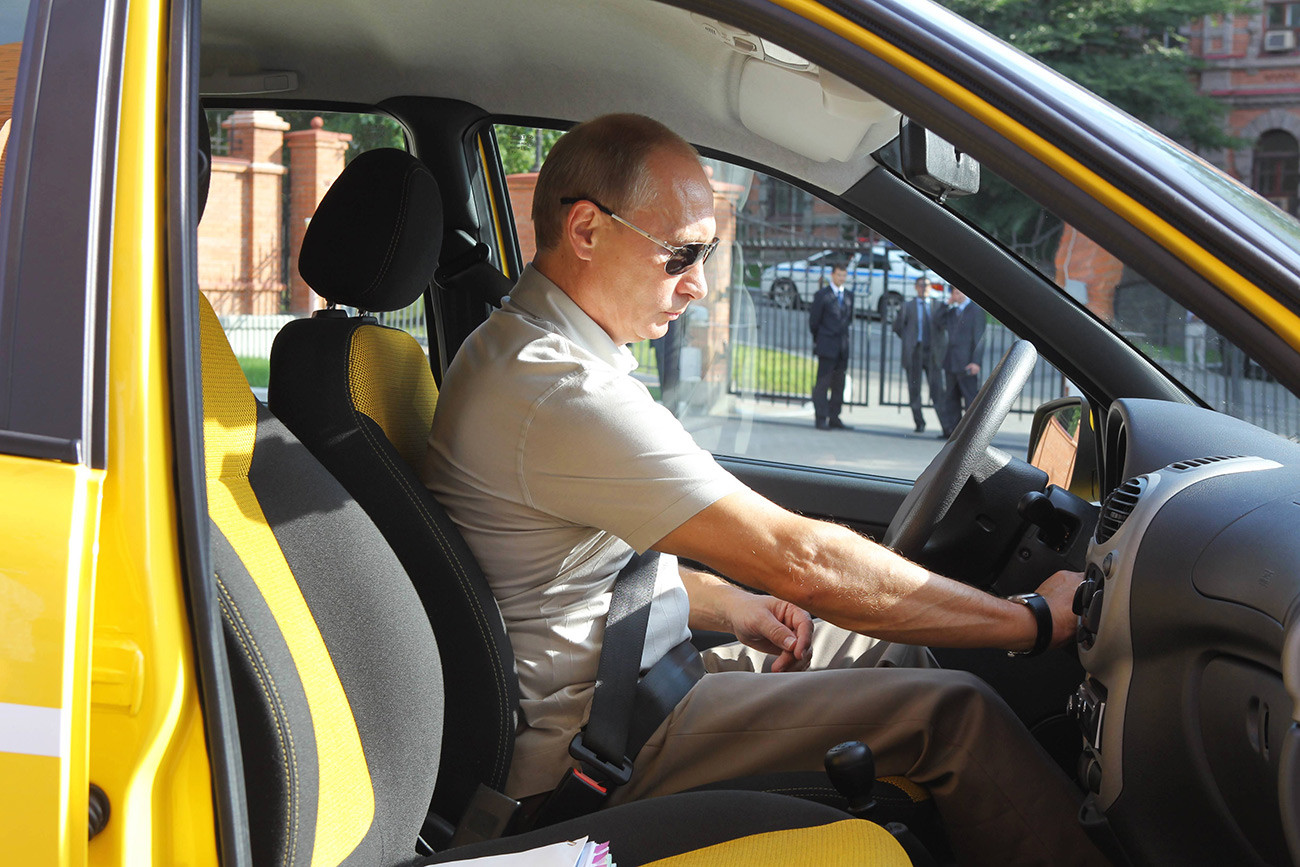 Vladimir Putin in a Lada Kalina

2006, Putin gave George Bush, Jr. a ride in a Soviet classic GAZ-21 of 1956 vintage. In Sochi, Putin drove the head of the Olympic Committee around in a Niva, perfectly suited for mountainous terrain. Both vehicles belong to Putin personally.

In 2010, Putin drove a brand new Lada Kalina on a four-day 2,000-km road trip across Russia’s East from Khabarovsk to Chita. When asked by an accompanying journalist if he was having a hard time driving and talking at the same time, Putin’s somewhat surprising response was: “I’m taking it easy, perhaps for the first time in a decade.” Never before had the much-maligned Lada, the butt of motoring jokes worldwide, been so warmly endorsed 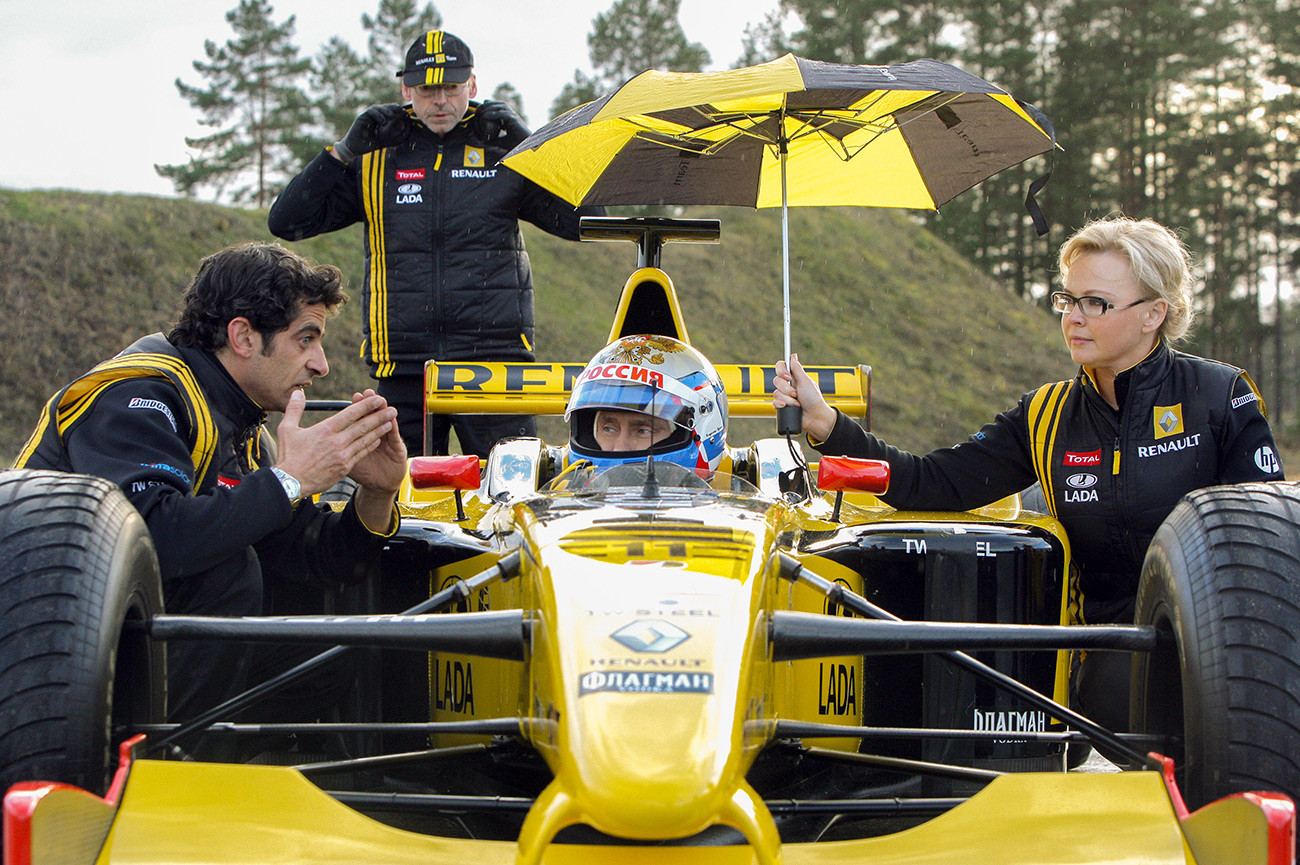 , most of the time Putin rides in the back seat of his presidential limousine, although he never misses a chance to take the wheel. During a 2018 meeting in Sochi, the president took Egyptian leader Abdel Fattah el-Sisi for a spin in this top-notch armored vehicle. 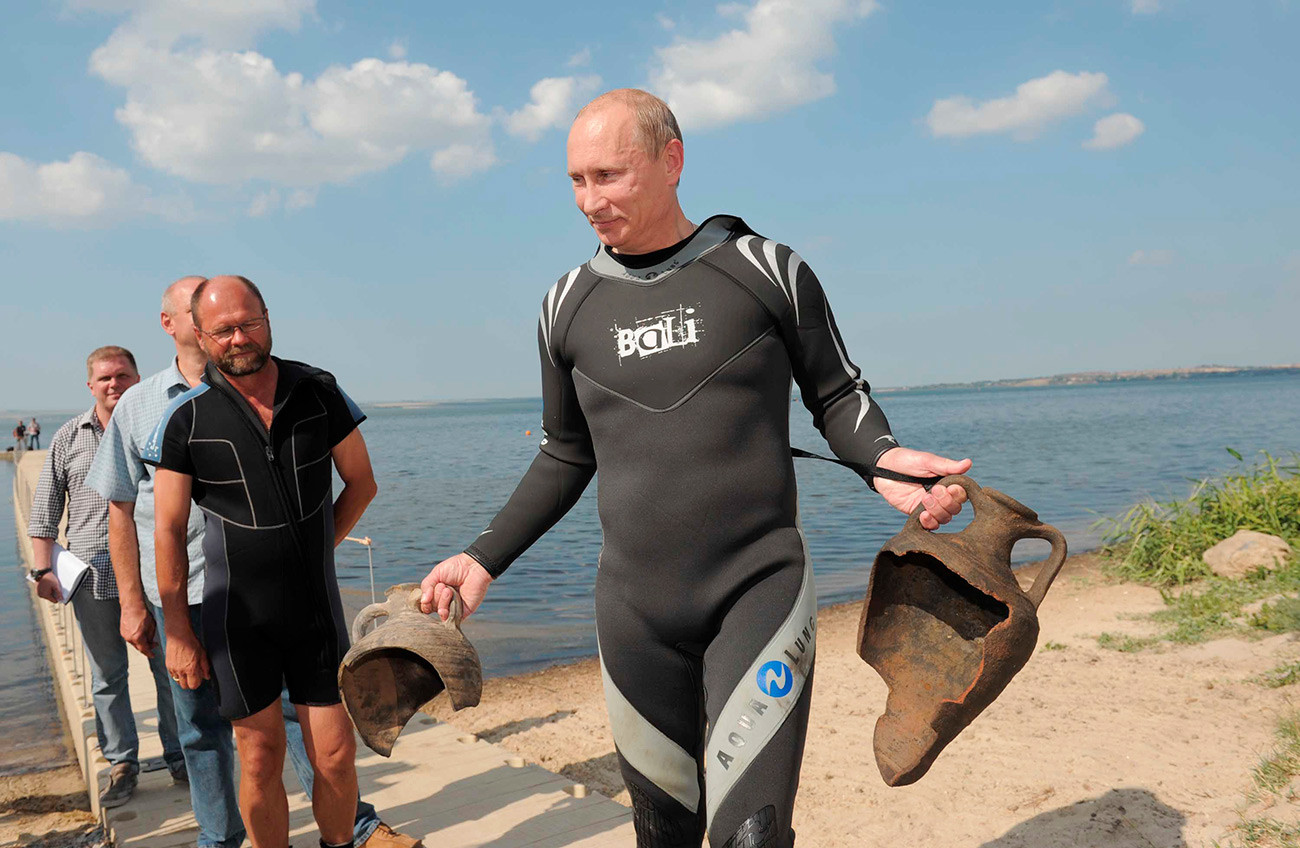 During his holidays, Vladimir Putin seldom goes diving. In 2011, he dived to the bottom of the Taman Bay to view the so-called "Russian Atlantis," the submerged part of the ancient Greek city of Phanagoria on the Taman Peninsula. It was only his second ever dive, Putin let it be known 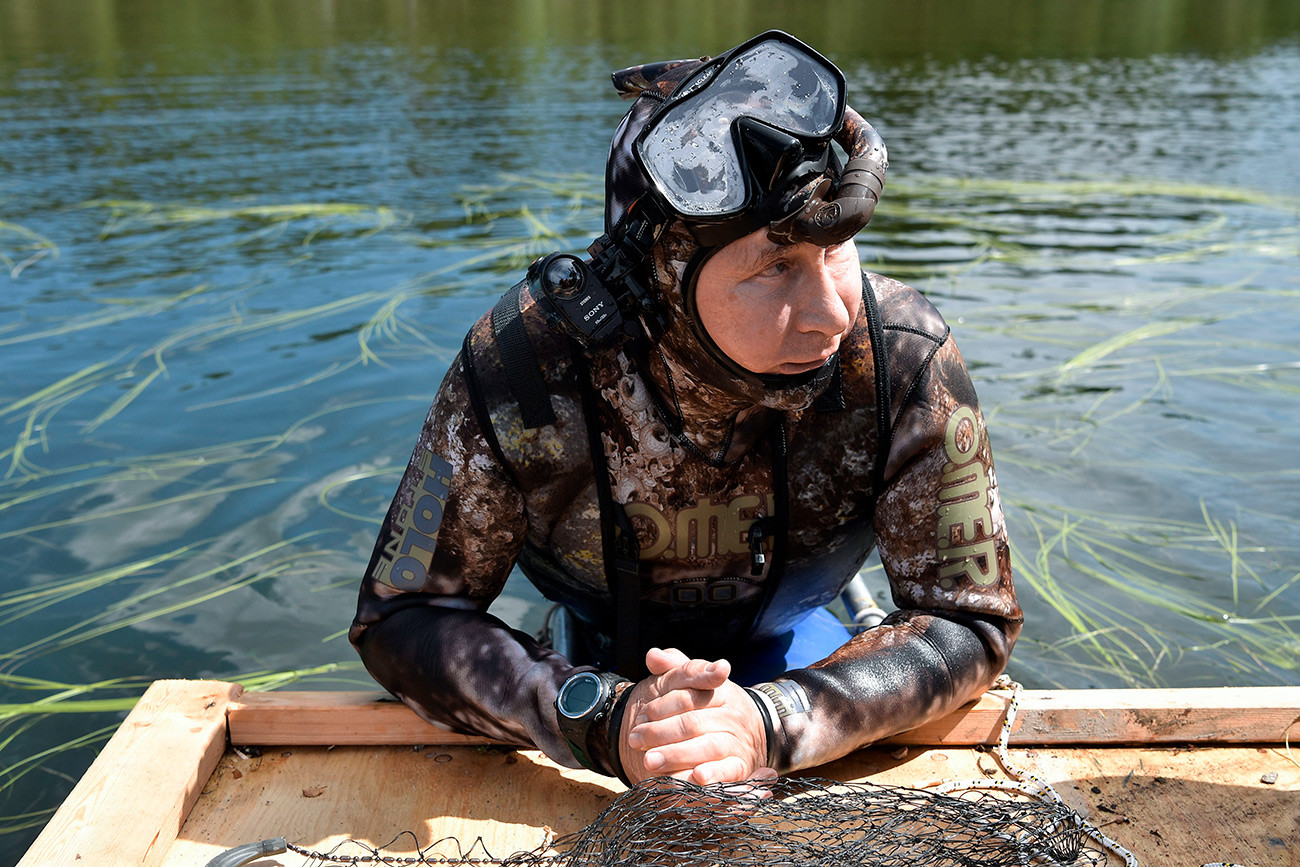 Putin after a Volga dive

in 2011, Vladimir Putin together with Dmitry Medvedev went to Astrakhan Region in the Russian South, where they dived and took photos of the Volga underwater world. In August 2017, the president went for a short two-day vacation at Tuva, where he did some underwater spearfishing. 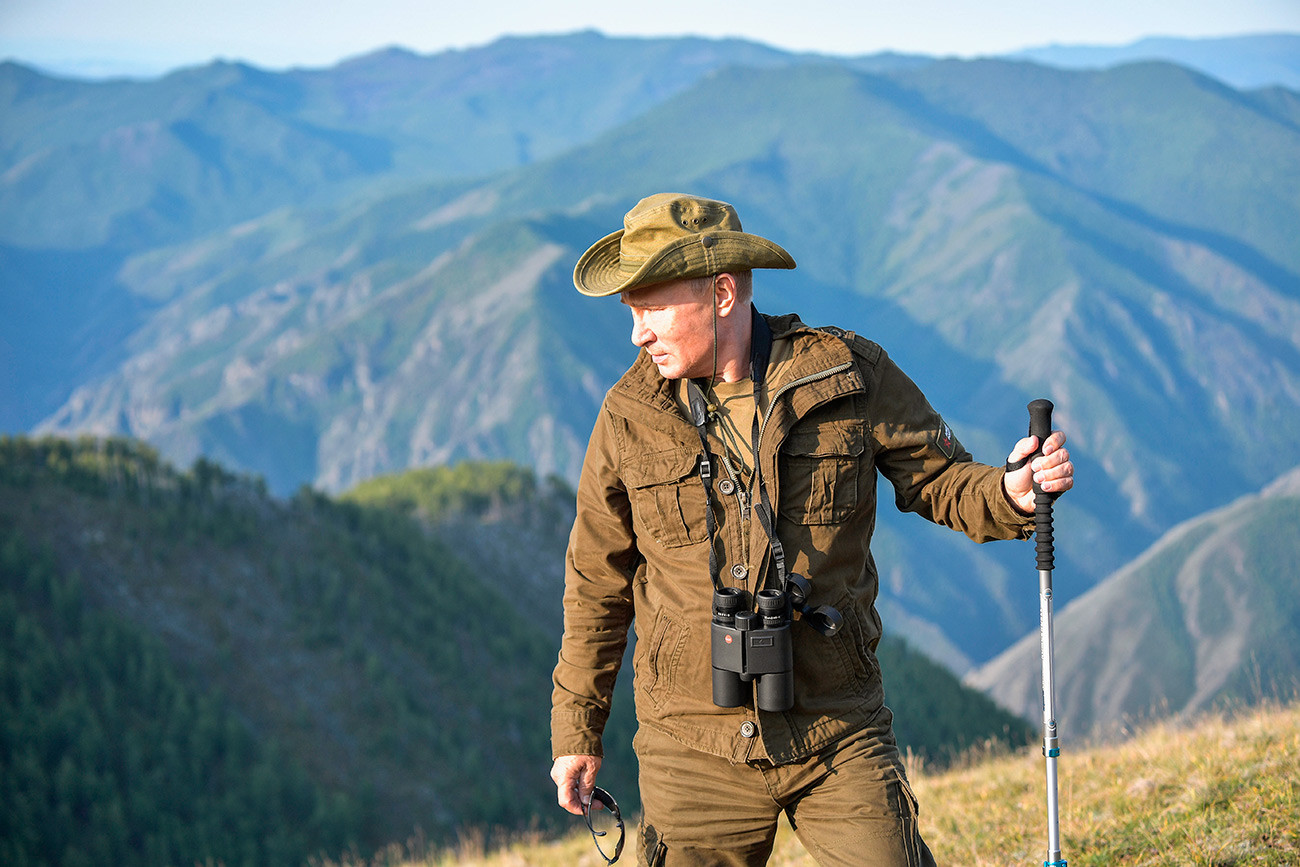 Vladimir Putin on a hike in Tuva.

It is also in Tuva where Vladimir Putin is fond of hiking. The region happens to be the birthplace of Sergey Shoygu, Russian Minister of Defense. Accompanied by Shoygu and FSB Director Alexander Bortnikov, Vladimir Putin spent a few relaxing days there in August 2018 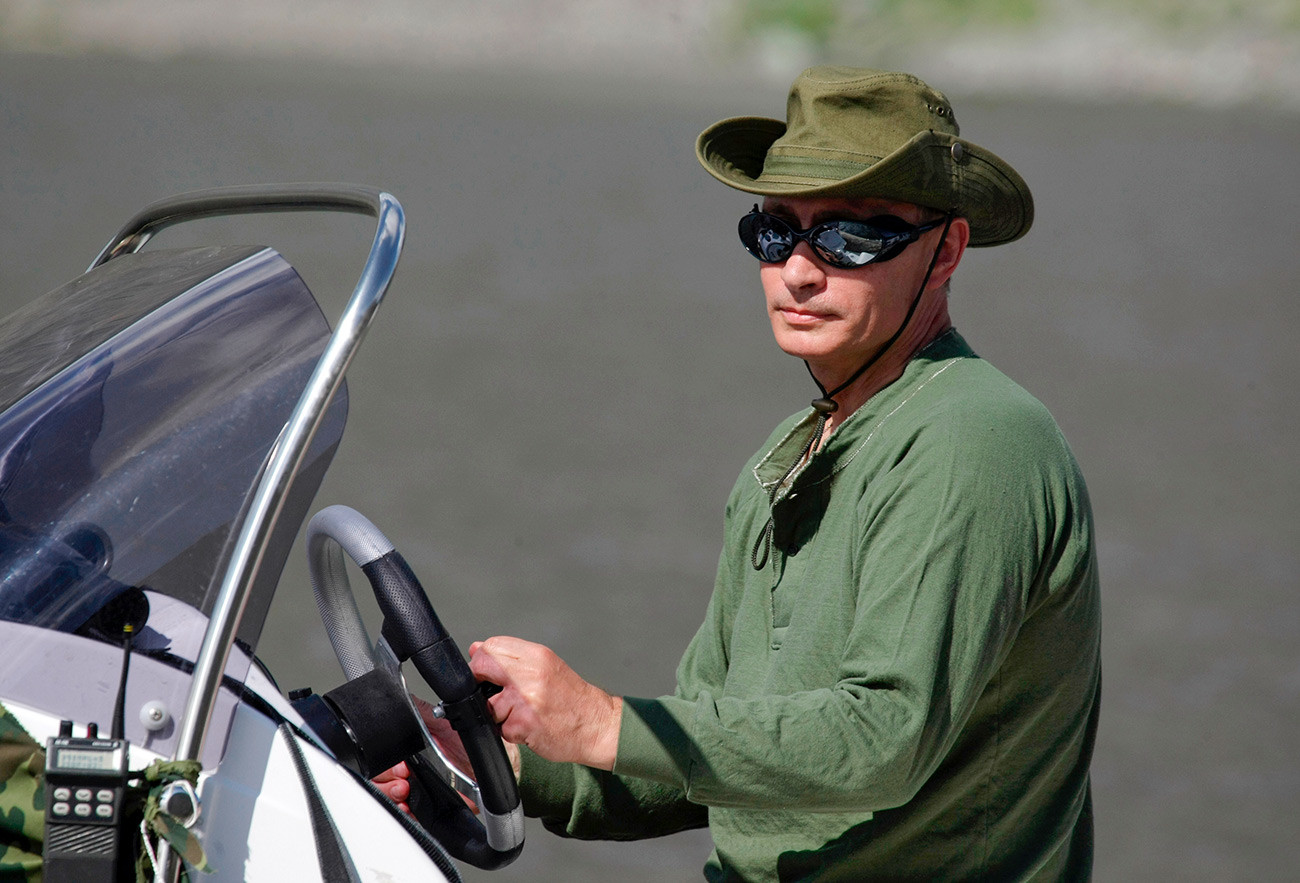 Putin seems to love visiting Tuva. He has been there several times, and in 2008 he was famously photographed on a hike and swimming in the river. 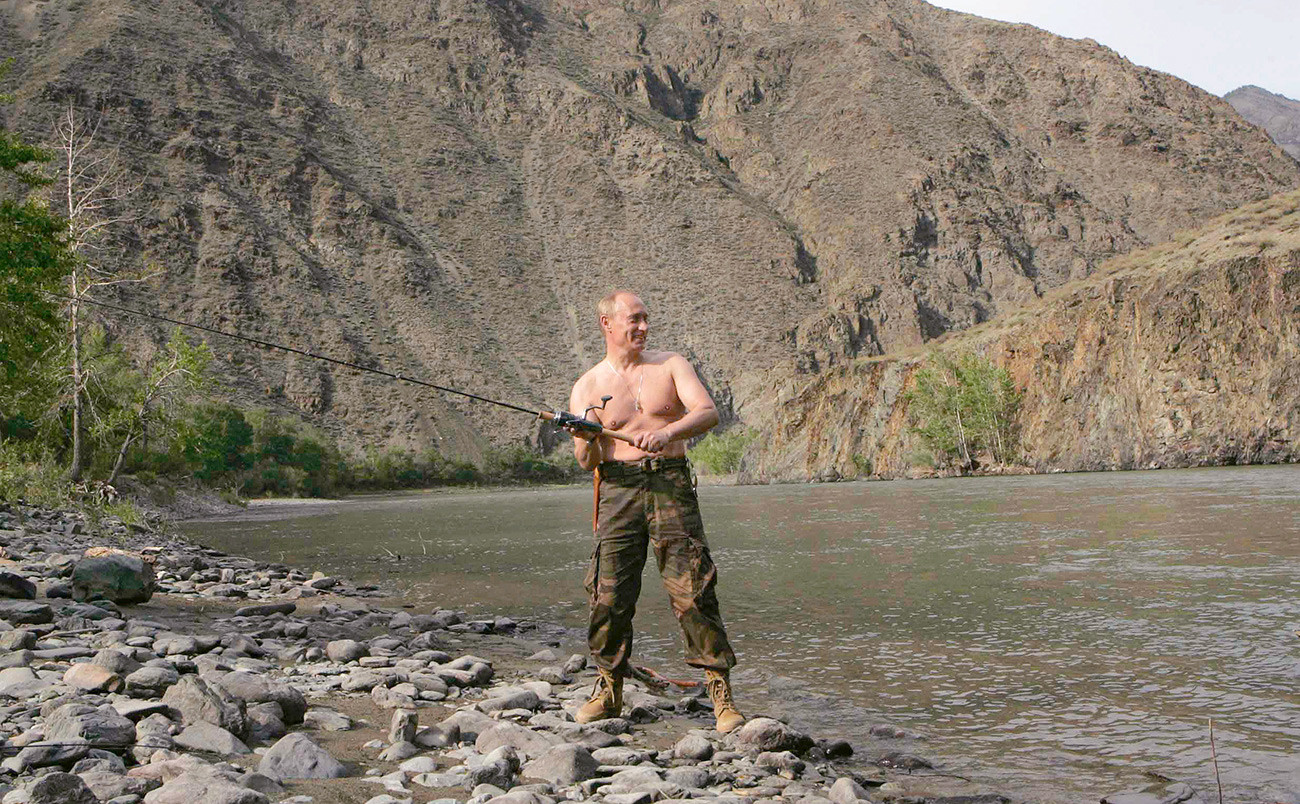 Emperor Alexander III once famously remarked “While the Russian emperor is fishing, Europe can wait”. Vladimir Putin, too, goes fishing in his (very rare) free time (whether Europe waits at such moments is unrecorded). “I love and am always glad to have the precious opportunity to sit with a rod. Sometimes my job even aids it. If not for that, how could I possibly have gone fishing in America with two US presidents?” Putin once said. 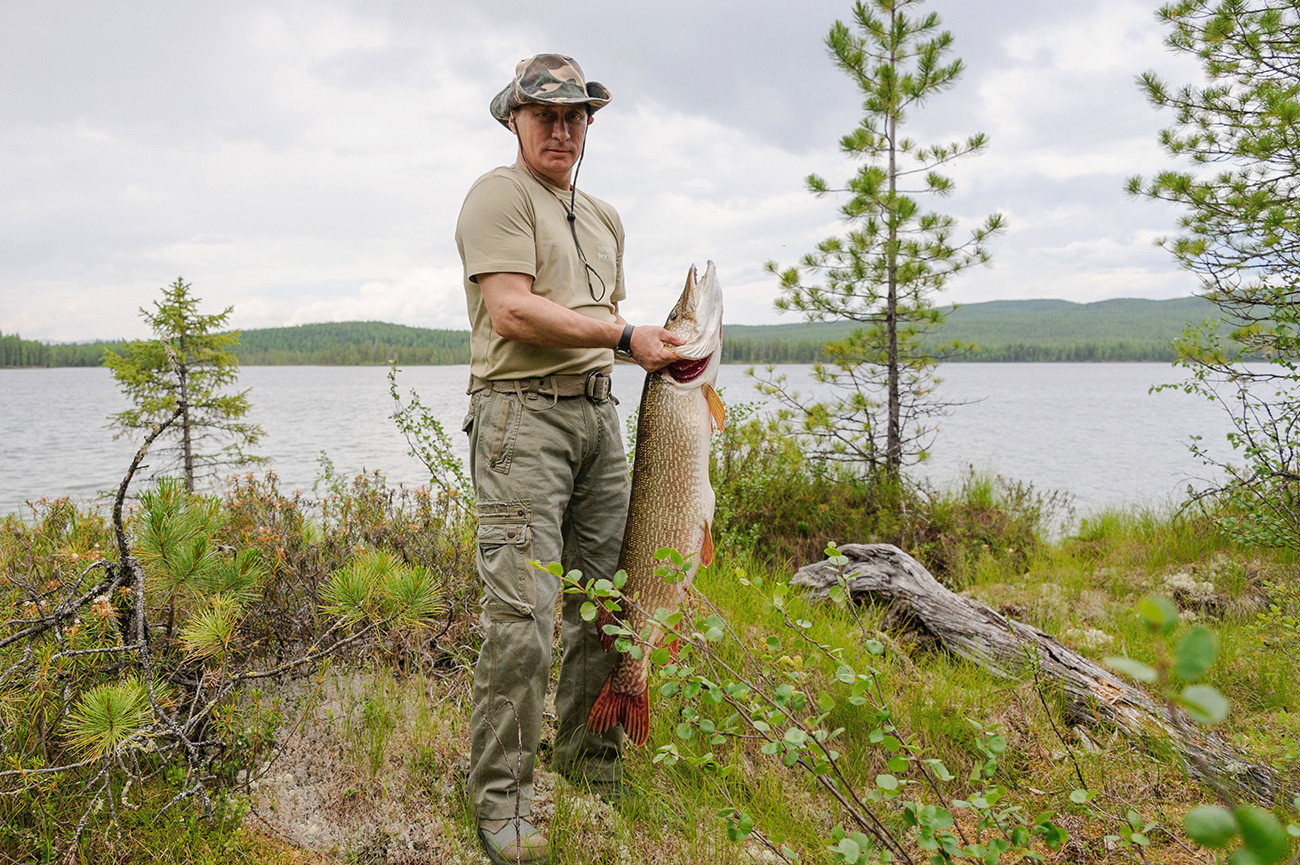 Tuva is also one of Putin’s favorite fishing spots. In 2013, he caught a 21-kilogram pike, so huge that it took the physically fit president a full three minutes to pull it out of the water. In August 2017, the president had an especially entertaining fishing session during which he spearfished for pike for two hours straight. "They’re so cunning and careful, they are fast to dive into the mud at the bottom,” Putin said about the local pikes before switching to rod-fishing for perch. In his opinion, Russia is the best place for fishing. “Frankly, I have to say that for me the best fishing in the world is to be had in Murmansk Region and the Volga Delta in Astrakhan Region,” Putin explained.