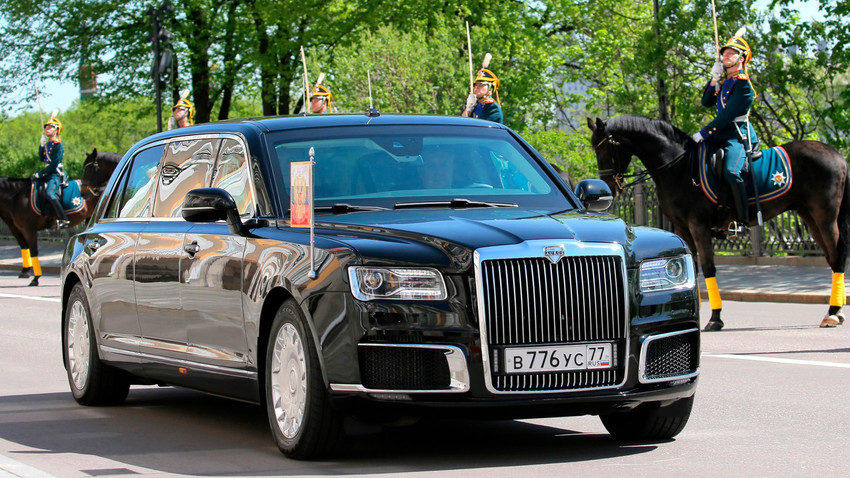 Vladimir Putin demonstrates the new "Kortezh" car during his inauguration.

Kremlin.ru
During his inauguration on May 7, 2018, Russia’s President rocked up in a brand-new, Russian-designed limo.

Inauguration day is a big deal for every Head of State, and for Russia’s Vladimir Putin, taking office for the fourth time on May 7, 2018, today was no exception. Apart from addressing the nation with speeches and accepting congratulations, Putin also showed off something new – a presidential limo created specially for him.

Stepping out of the Kremlin’s Building 1, Putin sat in the black sedan which escorted him to the Grand Kremlin Palace, where the inauguration took place. This new official presidential car, devised as part of the “Kortezh” (“Motorcade”) project, was designed and produced in Russia. Previously Putin had been using a Mercedes during his official drives but this time decided to switch to home-made cars – the “Kortezh” project has been in development since 2013 at Russian company NAMI.

“The vehicle passed all the necessary tests and it’s proven that it is safe for the Head of State,” officials told TASS News Agency. It’s expected that “Kortezh”-projected vehicles (their exact brand is still unnamed) will replace foreign automobiles in the State’s vehicle fleet.

In September 2018, commercial versions of the car will go on sale to the public, officials state. It was announced that NAMI will produce different models of Aurus (Aurum + Russia, official name of premium-class vehicles lineup): limo, sedan, SUV and mini-van.

If you're interested in cars, you might enjoy our article on how  the Emperial Russia came to enjoy the culture of car racing.