A conversation you’ll be forced to have every day in Russia: an expert’s guide 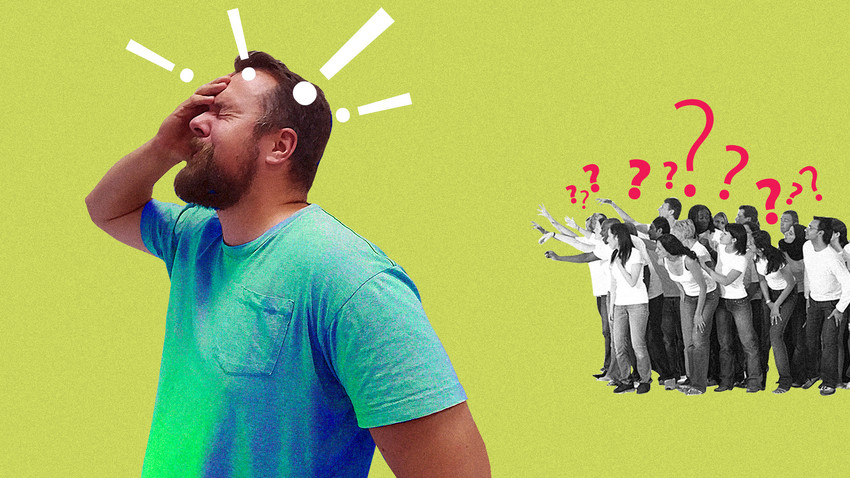 Alexander Kislov
Tim Kirby has been living in Russia for more than 10 years, but when it comes to talking to strangers, it's the same Groundhog’s Day for him every time.

Be forewarned foreigner! All who come to this land shall have to pass a daily test of patience and discipline as every Russian you meet will ask you the same questions over and over again. Three... five... maybe even forty times a day (if you go to a conference or something) you will be asked the same questions. You’re different, they know it and they’re really darn curious. But sadly, all their questions are going to be exactly the same every time.

As an American foreigner in Russia, who just so happens to be of Slavic background I possess the genetics necessary to blend in with the locals… until I open my mouth. Despite having the largest Russian vocabulary of any English-speaking foreigner I’ve ever met, my pronunciation is (and always will be) garbage. So, the second the conversation strays off the beaten path of words that I can pronounce, well, my cover is blown. Then, I hear those dreaded words that start the conversation and which I have to go through every time I meet a new person… “oh, you’re a foreigner”. At this point, try to take a deep breath and answer with the most jaded and unenthusiastic, “Da,” that I possibly can, hoping they can take the hint that I don’t want to talk, but most of the time it is to no avail. From here the questions are as follows…

Where are you from?

A logical first question with a short answer. Out of boredom I now ask the taxi driver, waitress, etc. where they think I am from. I basically conduct my own Gallup poll. The top answers are Finland and the Czech Republic because I speak Russian better than any Westerner possibly could in their eyes, yet I still speak it fantastically wrong but still kind of right (like Czechs) and apparently very slowly and flatly (like Finns).

I answer them with something like “the city of Cleveland, in the state of Ohio, in the USA… far to the north and right across from Canada”. I do this because no one knows where Ohio is (I don’t expect foreigners to know U.S. geography), and because many fantasize about moving to America they assume I must be from somewhere sunny and next to California or Florida. About 50% of the time I have to inform them, to their amazement, that snow falls every year in Cleveland.

Why do you live here!?

Finding out that you are an American who voluntarily lives in Russia causes the person who is asking you to usually become enraged. They have been told their whole lives that America is the land of milk and honey with streets paved of gold, where “everyone wants to go,” and since you shatter their established worldview they will demand to hear some sort of justification as to why you are here. I mean, after all, you traded a life of extreme wealth and luxury to come to this “horrible” place.

Usually, the next step is to berate me with questions like: “how can you live here, there is so much money in America?” No matter how they phrase them, basically every question somehow has to do with money. Russians en masse say they love America and I don’t doubt that, but the thing that they love the most about it is ‘green’. Sadly. I have only met one person who said they liked the values of the founding fathers as the main reason they chose to live in America. Maybe Trump should build a wall with Russia... somehow?

Again, because I am sick of this pointless question, I usually just answer, “all my ancestors came from Eastern Europe, I wanted to come back home”. This statement gets little or no response so I consider it to be a winner.

I must note as someone who likes Russia that I worry about the future when all random people I meet have such a low view of their country. If Russians are brainwashed by the media, like the Western press says, then it is the media from Hollywood not the Kremlin.

You know everyone in Russia wants to move to America!

So I’ve heard. Russians believe in a mystical “vsye” (everyone), and they believe that vsye is doing something they should… and they also must do it! Vsye is very dangerous for Russian society because if they believe vsye do X, then they will all want to do X as well, even if that is a very bad idea.

Hey, my Uncle’s cousin’s friend’s son moved to New York and he really likes it, what do you think about that?

“Good for him,” is all I can say to this statement, which is made after they find out I am from America and voice their anger that I live in Russia. I never really know what to say in response to this. I think the person wants to show some sort of kinship towards me, that someone distantly related to them moved to America. I guess that is nice, but I really don’t know how to react to this statement. It seems that every person who drives a taxi has a distant relative who moved to the U.S.

How long have you lived in Russia?

Over 10 years is my direct and truthful answer.

The irrationality of this line of reasoning is something I can’t get over. No matter how many times I’ve had to get a shot at the doctor’s office I still can’t just ignore the fact that there is a needle going into my arm, and this is the same situation. It is such a dumb question that it smacks you in the face and you cannot ignore it. If someone lives voluntarily in a country for 10+ years what would make you think that they don’t like it? Seriously, what could it be? No American would ask a Chinaman or Egyptian living in the U.S. for many years whether or not they like the country. Of course they do; they moved voluntarily!

Note, they always ask: “do you like Russia?”; not “what do you like about Russia?” which would be far more rational and valid. Moving on…

Are you married? OR, Do you have any brothers or sisters?

It is hard to imagine meeting someone for the first time in the U.S. and asking “hey bro, are you married?” Or when speaking to a new co-worker: “hey, how many brothers do you have?” In the West this is considered personal info, despite it being public knowledge to everyone via Facebook, but in Russia this is normal to inquire about.

My answer is, Yes, I am married, and then I explain that both of my children have very stupid sounding patronymic names thanks to dad being a foreigner (Timotiyevich, Timotiyevna), which brings a smile to most Russians’ faces.

I believe the part about asking if I have brothers has to do with the fact that I left my parents in America. But then again, people with whom I served with in the U.S. Peace Corps in Kazakhstan, and who were not planning to immigrate, were asked the same question. So, who knows? But in short, Yes, I am the jerk who is an only child that moved to another country. Needless to say, when I am in Ohio there is lots around the house for me to fix! One year my dad surprised me with 15 tons of gravel to shovel. To be honest, it was kind of fun.

This is the point in the conversation where things either go silent or the Russian person, (thanks to the great Communist education system), feels obliged to enlighten the naive and moronic foreigner (who has lived in the country for a decade, works in the media and speaks the language fluently) about some aspect of the nation’s history or culture that I in fact learned during my first year living here. Russians are certain that until you prove otherwise you are a stock Western person who has a stock Western worldview.

Both Communism and Orthodoxy stress correcting bad behavior, and blasting away harmful myths, which is good for society and is certainly part of Russian culture; but the problem is that as a foreigner you are treated like a 110 kg, 185cm, bearded, crooked-toothed child, no matter what you do. So, you are going to be the subject of this person’s sense of obligation to mythbust the Westerner, thus “helping” said foreigner… thanks.

This can also be a part of trying to find out whose side you are on. For Russians, it is critical to know if someone is svoi (familiar\on their side) or chuzhoi (foreign\not on their side). You will encounter this when meeting Russians. I know one American guy who literally stopped a Russian man from berating him about U.S. foreign policy with the words: “I hate Obama, I didn’t vote for him”. Seeing that this American was svoi the Russian made an abrupt about face and just walked away in silence.

So what did I learn from these 10,000+ identical conversations when meeting Russians for the first time?

- Russians are very curious about the outside world and not afraid to meet new people or ask them questions.

- Russians have an inferiority complex about their country.

- Russians have a collective society and their desires in life reflect what “vsye” want/do.

- Russians idealize life in the West through rose-tinted Hollywood glasses, and have irrational views/opinions about the West because of this.

- Russians consider your family situation to be a critical part of who you are as a person, more important to your identity than even your career.

- Russians see you as naive and soft, and that you need to be brought up to speed with the “shocking” realities and history of big scary Russia.

- Russians want to know if you, Mr. Foreigner, are “svoi” or “chuzhoi”.

So, where are you from, by the way?