Will Russians join the raid on Area 51?

Lifestyle
Russia Beyond
Anthony Russo, Joe Russo/Marvel Studios, 2019
‘They can’t stop all of us.’

Russia is widely blamed for meddling - in anything and everything. So, will Russians be joining the ‘Storm Area 51, They Can't Stop All of Us’ Facebook event scheduled for Sept. 20, 2019?

We can’t rule any possibility out. Here is what we know about Russia’s involvement in the Storm Area 51 movement so far.

Many Russians have no clue

“Am I the only one who has no clue about this? Can anyone explain this meme to me?” wrote confused VK user Denis Dotsenko inquiring for further information about the coming storm of the notoriously secret U.S. Air Force base in Nevada.

Those in the know readily jumped in to help. “It’s a secret camp where they test planes and rumors have it there is also a flying saucer and some aliens,” VK user Dima Pershin kindly explained.

And that really is the scope of ‘discussions’ about the event on the Russian web.

Overall, there is considerably less fascination - or interest - with the Storm Area 51 movement in Russia than in the U.S.

Are Russians joining the storm?

But there are some Russians that do take it rather seriously and have declared their intention, at least verbally, to join the raid.

“Denis, I will be also storming this area on the 20th of September. There will be Elon Musk, the Rock from Fast and Furious, Keanu Reeves, and others,” wrote one excited internet user.

Some express more caution, not because of potential repercussions from breaking the law, but because they’re afraid the whole Area 51 thing may turn out to be a hoax. “Okay, they will storm it but find nothing. It will be such an embarrassment,” wrote Alexandr Berezhnev.

Some Russians already speculated they can’t go, because all the hotels and hostels near Area 51 must already be fully booked for September 20 and there won’t be enough accommodation for everyone. “Even though there are plenty of hotels there,” noted Dima Pershin.

Others are afraid that the raid could end up in several accidental deaths and express hopes that it could be avoided, especially if there is nothing “supernatural in there”.

Others just troll the whole endeavor:

(“Can you promise I’ll be on RenTV?” NOTE: RenTV is a Russian TV channel that airs many supernatural-themed programs)

And there are some that even see the storming of the Area 51 as a business opportunity. One VK user wrote: “I would have rented a van equipped with portable refrigerators, packed them full with booze, and sold it all in the middle of the Nevada desert for an outrageous price, 30 times the usual. But I can’t get a U.S. visa, because of my criminal record, even though I have relatives in the U.S.,” wrote user koeni9se99.

Others suggested they would sell the brine from pickles as a hangover remedy for those joining the raid. Though it’s not exactly clear why the author thinks they plan on drinking.

And finally, some, more prudent Russians see the Storm Area 51 movement as an inspiration for a change at home. They call for a similar attempt to storm a popular and widely trolled TV show, Dom-2, to finally put an end to the longest running reality TV show ever! 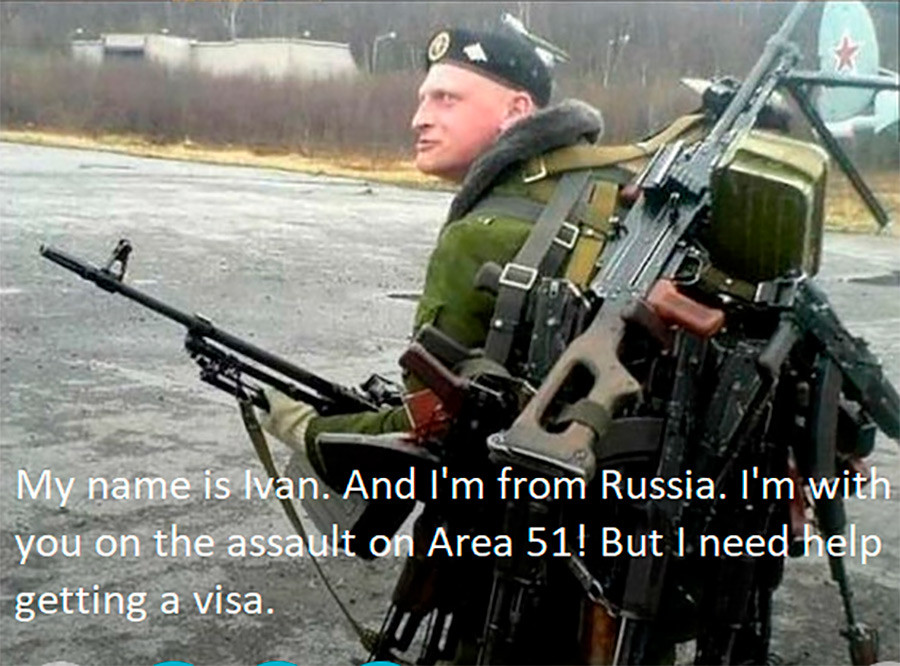 Three phases of a man's life: birth, the raid, death.

When you try to explain to your mom that you'll be late and will come with an alien.

Click here to uncover the secret of the Tunguska explosion of 1908 and here to search for Bigfoot in Russia.