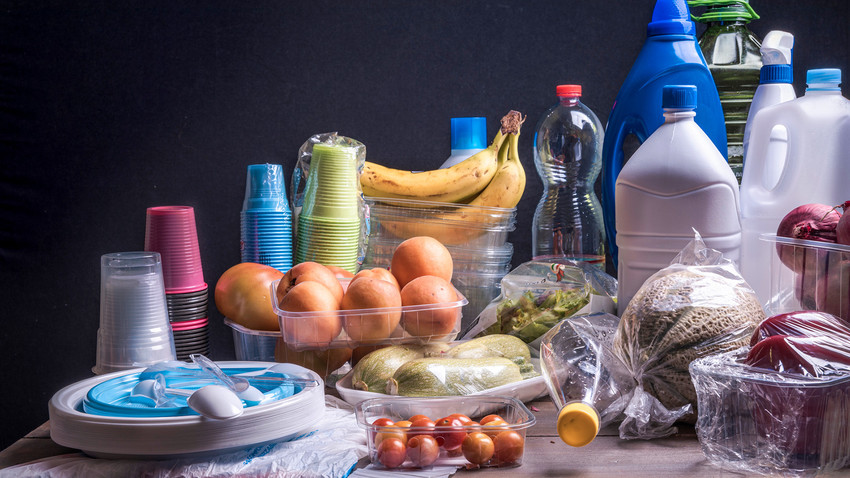 Getty Images
Russia is no pioneer when it comes to “green” movements, but there is a saying that Russians are slow to saddle but fast to ride. Although the principles of zero waste are only now slowly catching on in Russia, there are several Russians promoting the lifestyle and doing great things for environmental protection.

Zero waste is a set of principles that focuses on waste prevention by encouraging the redesign of resource life cycles. The movement that used to be associated with hippies has entered the mainstream in recent years, if social media is anything to go by: in May 2017 there were 350,000 Instagram posts tagged “zero waste”, today there are more than four million only in the English language.

The Russian translation – ноль отходов (nol’ otkhodov) – is climbing close to 50,000 hashtags on Instagram alone. The concept is finally arriving to the world’s biggest country, a country that is almost literally drowning in waste (according to Eurostat just 7 percent of trash is recycled in Russia, falling far below France's 43% or Germany's 68% achieved in 2017). Russia Beyond spoke to three Russian zero-wasters about their experience of reducing, reusing, recycling and refusing.

The road to zero waste

Irina Kozlovskikh is originally from Kirov, then studied in Nizhny Novgorod and moved to Moscow several years ago. Now a member of Greenpeace Russia’s “Zero Waste” project, she first learned of the concept during her Master’s studies in ecology, when she read Bea Johnson’s seminal book “Zero Waste Home”. Today, Irina can fit all her waste from the last two years into a glass jar and “weaves” baskets out of unrecyclable receipts. 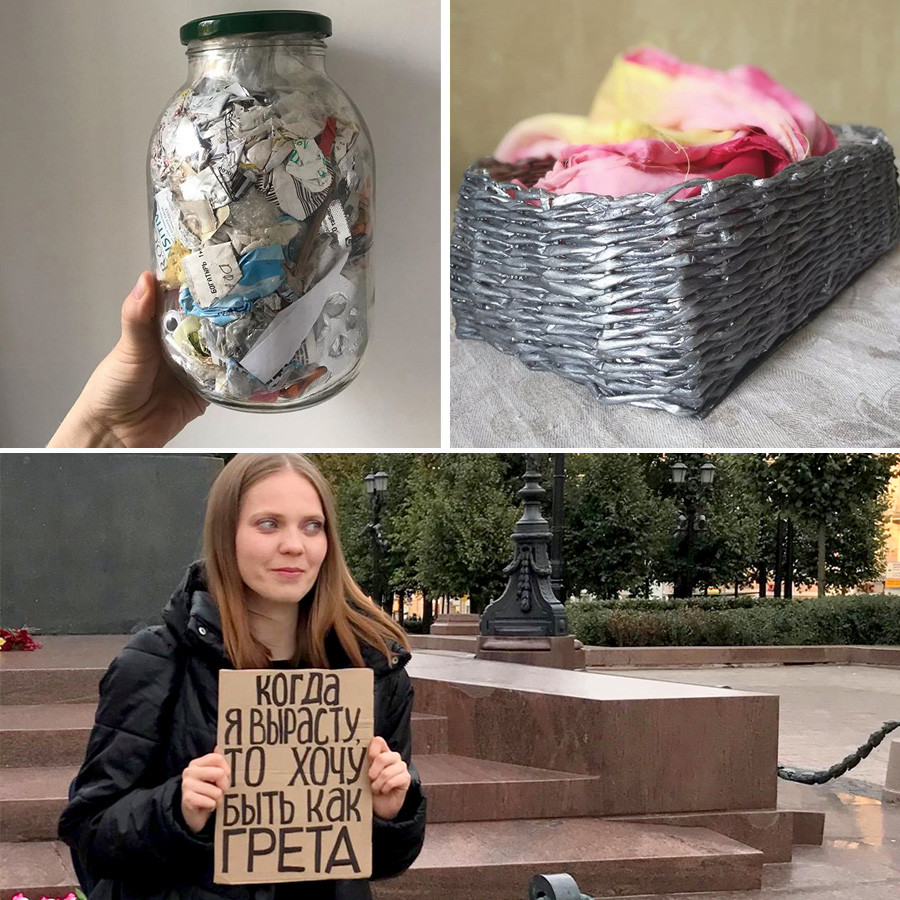 Dina Khitrova (Yekaterinburg) is an architect by training but left the profession in 2010 to become a volunteer and environmental activist, spending her summers in Karelia helping put out forest fires. The decision to go zero waste was made some time ago, but the road was long. Dina finally succeeded in September, 2018 and for the past 14 months has not purchased anything apart from groceries and items of everyday use, naturally the vast majority of that package-free. She is also popularizing “plogging” (a combination of jogging with picking up litter) in Yekaterinburg. During one of her volunteering trips to Karelia Dina noticed that “even doing something good can lead to something bad” as fire hoses are usually just dumped into the bin when they’re no longer functional. So Dina decided to apply the zero waste principal to them and makes wallets, bags and other accessories out of them.

Andrey Polovnikov comes from the relatively small city ofKirov, and is a chemist by profession. Today, Andrey has his own natural cosmetics company, Golodny Leshy, which is safe for the environment and people.  The company has just moved production to St. Petersburg. Some of its principles include avoiding packaging where possible (selling through package free shops, for example) and where packaging is unavoidable, using as little as possible, reusing it and utilizing recycled products.

Andrey’s love for nature goes back to childhood memories of camping and hiking in the wild.

“I walked barefoot through cold swamps and hot deserts, touched rocks with my hands in the mountains and ferns in flooded forests. Moving towards a zero waste life is the logical extension of views of people who want to preserve their home, planet Earth. In previous jobs as a technologist I had no control over the production development. So if I want to do something to help nature and mankind, it has to be my own production.” 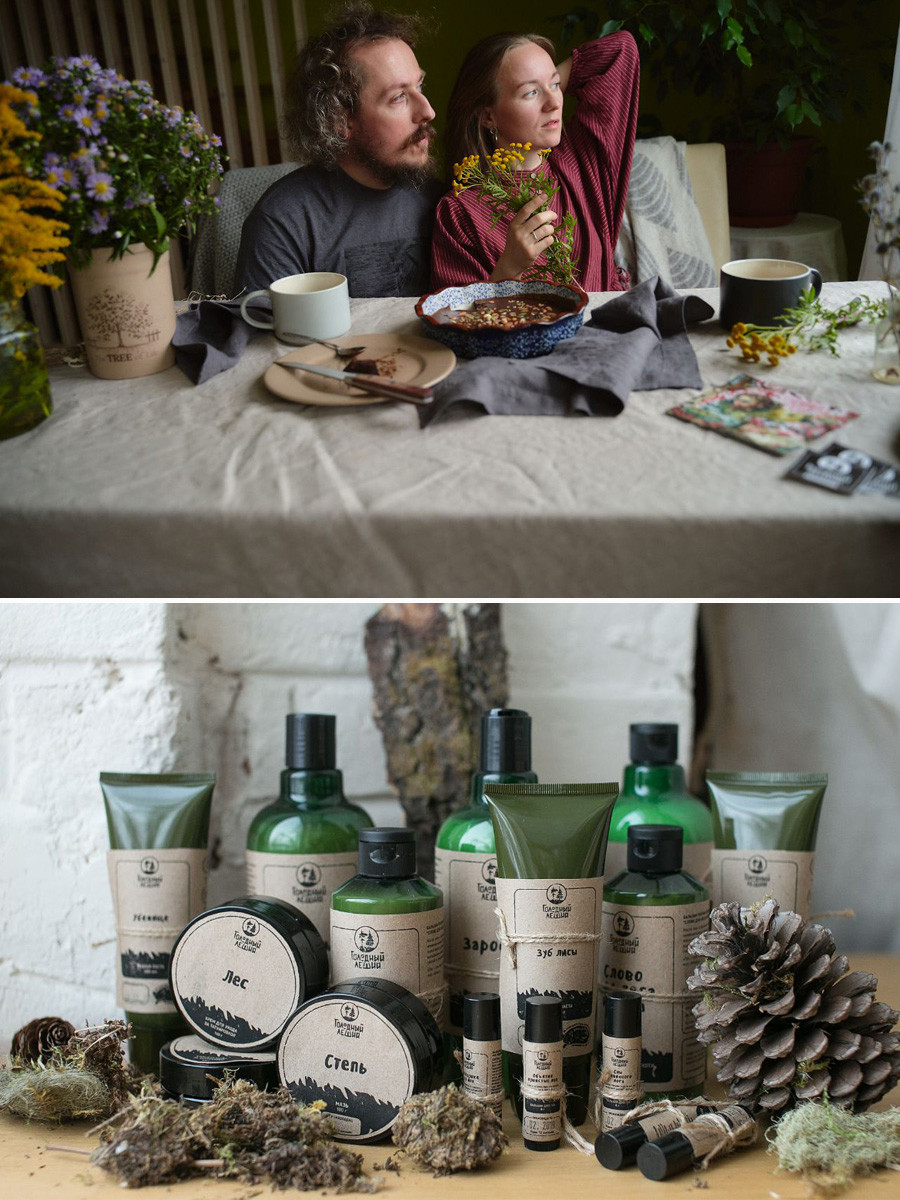 In the West, living a zero waste lifestyle is getting easier thanks to package-free shops, an abundance of information, and society as a whole being ready to change for the environment.

According to Andrey, in Russia there are still not enough alternatives to single-use items and the infrastructure is not yet in place to make recycling an effective process. Dina sees a lack of package-free shops (especially outside of the main cities of Moscow and St. Petersburg) and a barely existent, poorly thought out recycling system for citizens to dispose of their waste properly as the main problems. These obstacles aside, both zero wasters agree that living more conscientiously is doable – if there’s a will, there’s a way. The hardest thing about going zero waste, Dina finds, is the amount of preparation and self-discipline and getting the first “eco habits”. 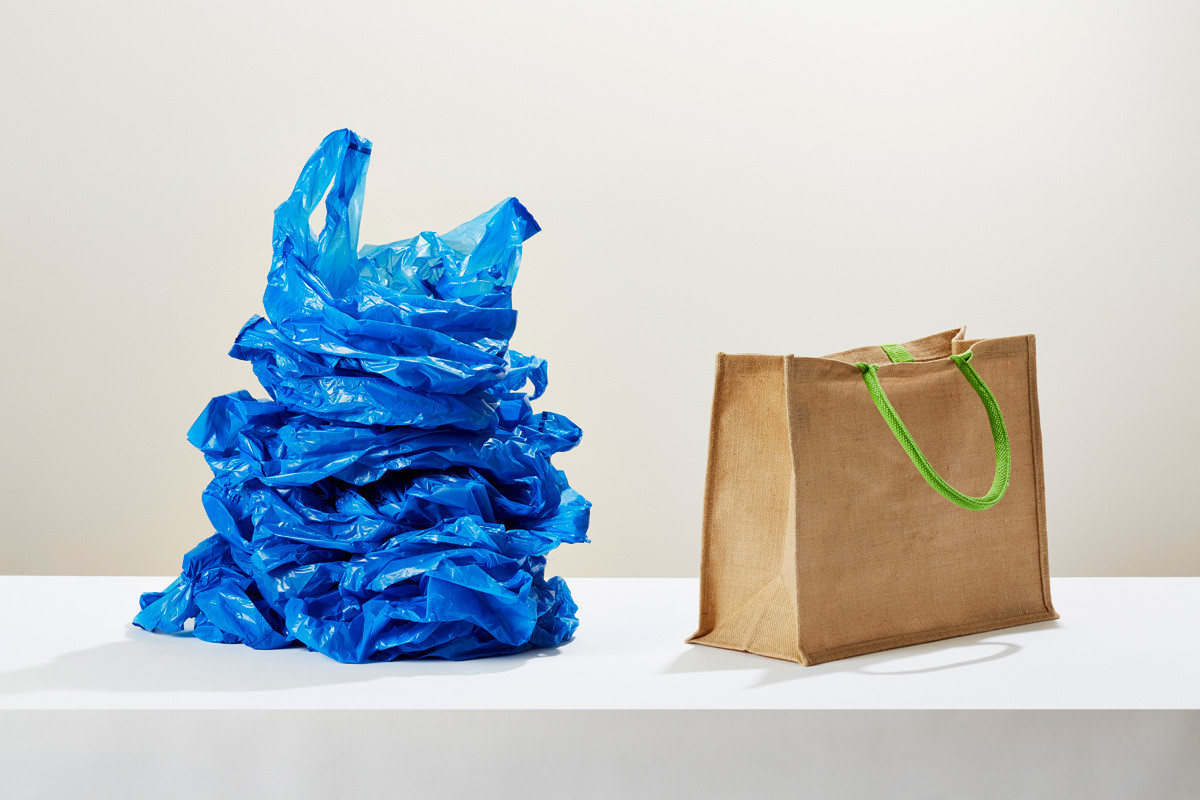 “In Russia I don’t see too many difficulties in going zero waste, however what really gets in the way is the absence of necessary legislation. Some 127 countries have already introduced a ban on single use plastic, while our lawmakers keep saying ‘someday’. Without a law in place there’s no motivation for businesses and consumers to change,” Irina explained to Russia Beyond.

“People don’t know where to start. There are still too many questions and not enough information or obvious answers. Currently, we don’t have a system in place that is comfortable, logical and simple – you’ll agree that, at the moment, transporting their recyclables to a special place is something only very few people are ready to do,” Dina lamented.

Is Russian society ready to go zero waste as a whole? 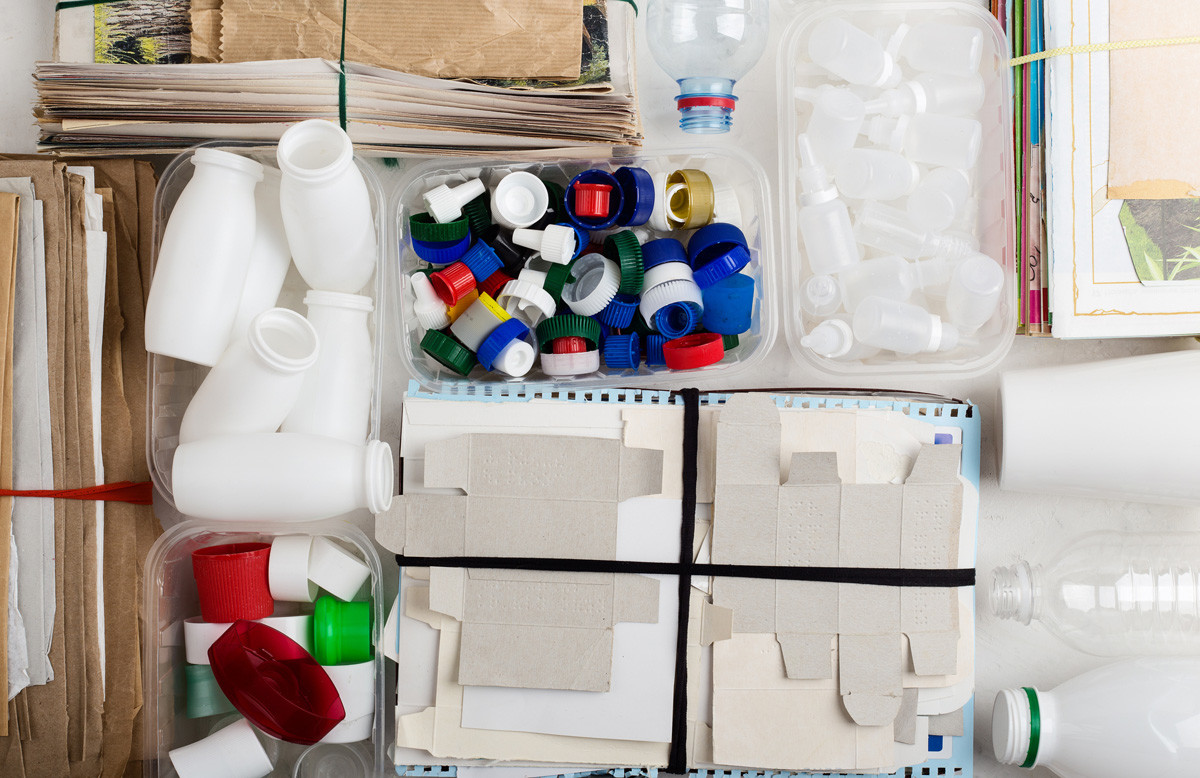 The zero wasters Russia Beyond has spoken to have all received support and encouragement from their friends and family. But what about Russian society as a whole? It seems like it’s come a long way.

“Before, people would look at me as the local ‘crazy’ because they didn’t understand why I was doing what I was doing, what use it would bring if everyone else carries on throwing everything out into the normal bin. The classic ‘one person can’t change anything’ mentality,” Dina recalls.

Now, the activist is regularly invited to speak on TV and radio about the problem of waste and plastic pollution, conducts eco classes in schools and gives painting master classes using paper made out of unused receipts.

“There are lots of positive moments. I like that this topic is becoming more discussed and that conscientious consumption in Russia is almost a trend by now or, at least, a fashionable tendency”.

Irina agrees that Russian society finally understands that “trash is bad and plastic is evil” but there are things that do not depend on the people themselves.

“No one will throw away a battery into a bush to spite nature, but they will throw it away into a normal bin due to lack of information. The problem is that Russians still don’t believe that they can change anything. So what we need is for the corporations and the government to step up.” 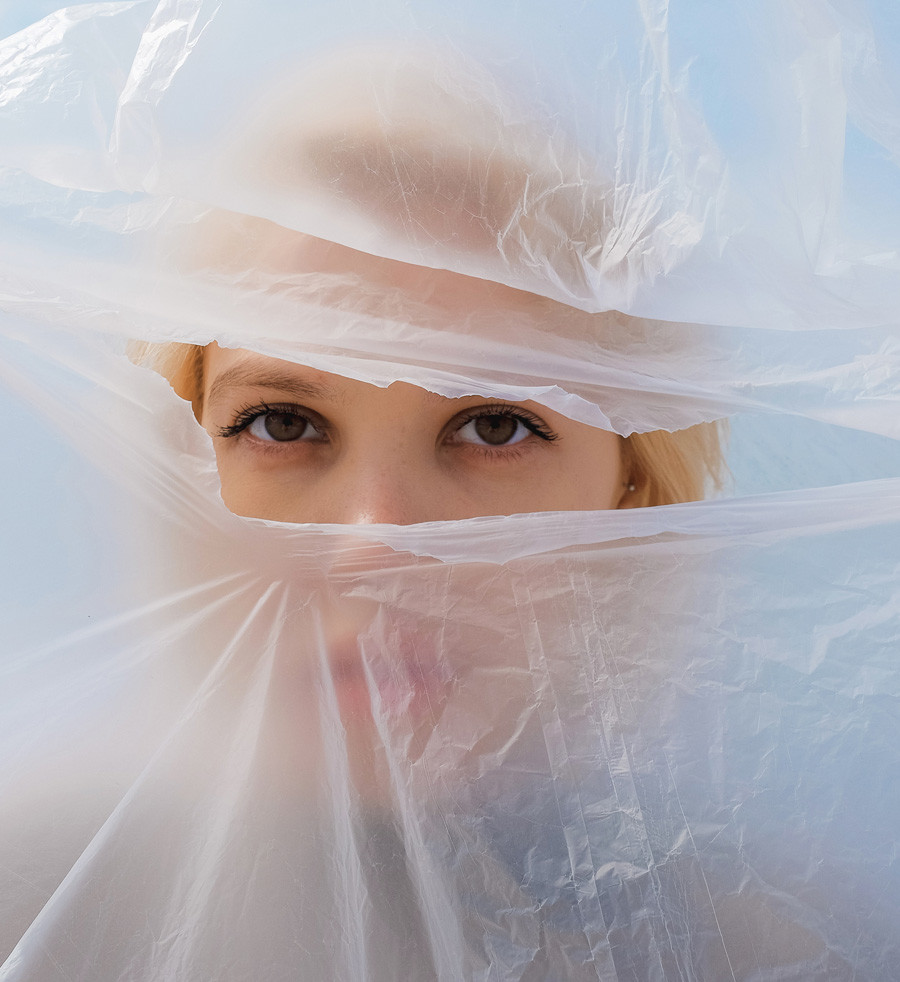 Even smaller cities like Andrey’s native Kirov are witnessing these positive changes with more and more people taking part in recycling initiatives.

“We truly feel like society is moving in the right direction and are extremely happy to be a part of it. After all, everything is interconnected and for every decision we make now we’ll have to pay in the future.”

Is the future of Zero Waste female?

Although on the surface it appears that Russian women are more concerned about pollution and constitute a larger proportion of Russian zero wasters, Andrey believes that these differences are actually not too substantial.

“From our side it’s hard to evaluate because women tend to buy cosmetics more often. But if we analyze our orders, men are more prepared to buy products without packaging. I think the gender differences are not substantial. When it comes to people around us, everyone is concerned about the levels of pollution regardless of their gender.”

Andrey’s son is almost three and already now the very young man is attuned to the problems of waste and pollution: “whenever he sees something lying around at home, on the street or at the factory, he grabs it and starts shouting ‘we need to recycle this! where can I put it?’ and this really makes me happy."