Science & Tech
Maria Stambler
Plastic Adios
A team of Russian and Spanish entrepreneurs has set up a company that promises to start ridding the world of plastic waste with an innovative approach that involves crowd-funding and pyrolysis technology. And you can join the fight! 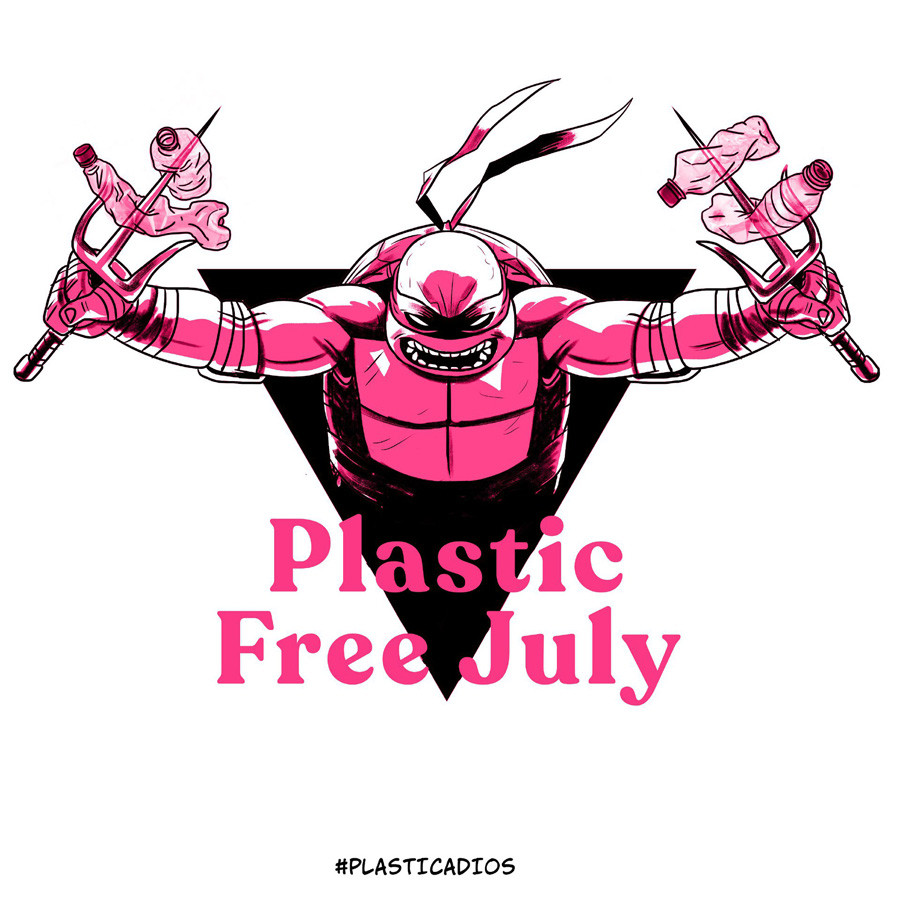 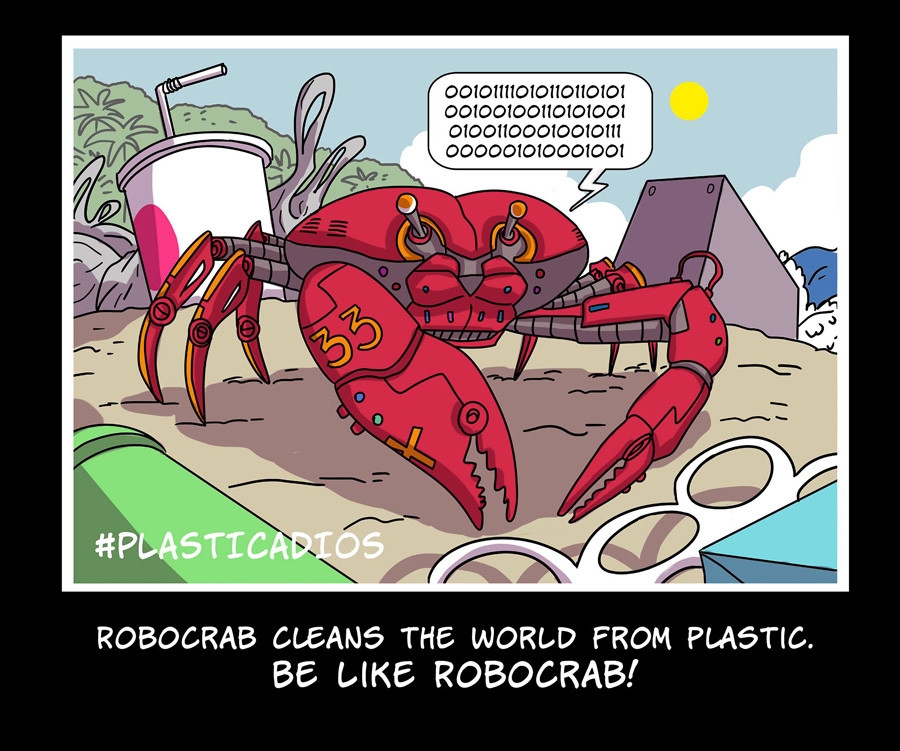 Actually, thanks to Plastic Adios, a new Spain-based company founded by Georgy Vachnadze - an entrepreneur with Russian roots, and the technology and business model his team of Spanish engineers and entrepreneurs created, soon everyone can become the superhero that our planet needs in the fight against plastic pollution – and make a profit by investing in the project. More on that below.

How the technology works

Plastic Adios, founded in Madrid in 2018, is a provider of end-of-life plastic recycling that focuses on low-temperature pyrolysis as the most commercially viable method of cleaning up the environment. Pyrolysis is a non-toxic chemical process for converting plastic into synthetic gas, which is then condensed into fuel.

“This technology in and of itself has been around for a long time but it has mostly been confined to small-scale pilot projects that have almost no impact on the situation with polymer waste. For now. But we are all hoping and waiting that soon we’ll find real and effective solutions to chemical recycling of plastic,” Alexey Kiselev, plastic recycling specialist at Greenpeace Russia, explained to Russia Beyond.

With Plastic Adios, Georgy wants to take the technology to the next level and offer it as a Product-as-a-Service (PaaS), which allows customers to purchase a desired result rather than the machinery required to achieve that result. In the case of Plastic Adios, customers pay a fee for each liter of fuel produced rather than the equipment to produce it. The net effect is a substantially lower capital investment than would have been required under a traditional business model. 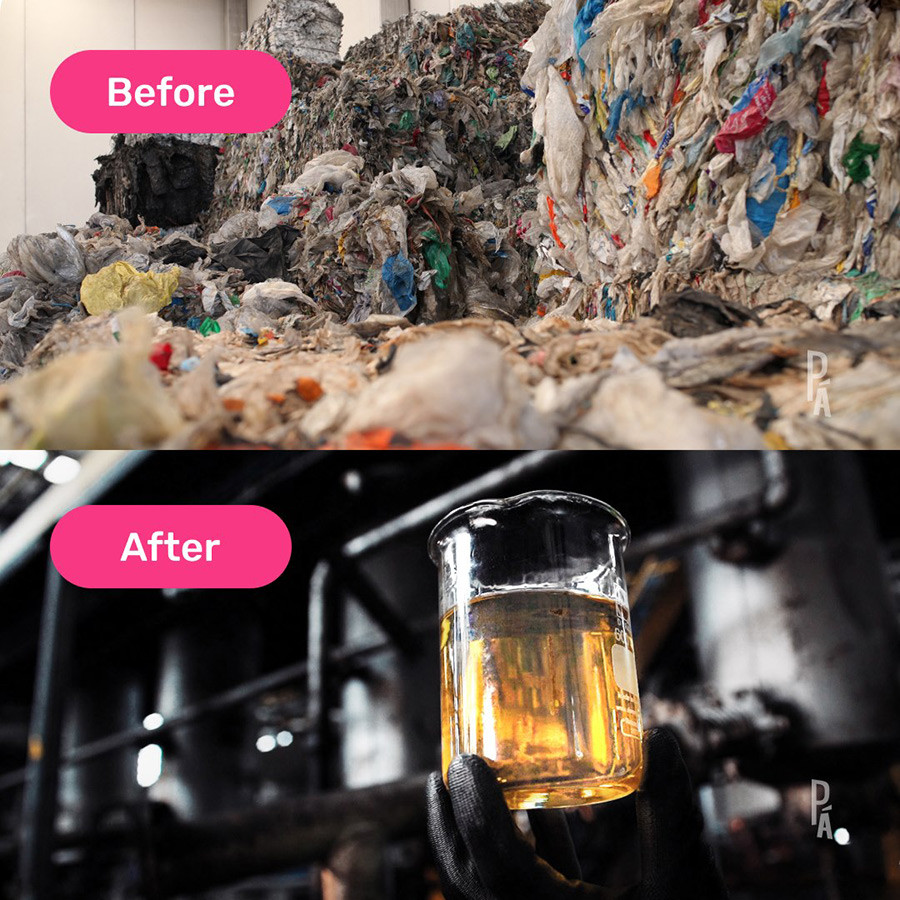 Although chemical recycling technology, in general, is “capricious in regards to the quality of the material” according to Alexey Kiselev, Plastic Adios works with just about any type of plastic and is capable of generating cheap eco-fuel without emissions, toxic residue or harmful micro-plastics. Waste burial is no longer the end of life for plastic as it is converted back into a useful form of energy. The resulting eco-fuel has all the characteristics of heating oil and can be further refined into other fuels as needed, while also cutting fuel usage CO2 emissions by up to 40%.

In our day and age, with staggering statistics like humans producing more than 300 million tons of plastic waste each year, 92% of which is buried, burned or abandoned to float in the rivers and oceans thus poisoning the water, fish, other aquatic animals and humans, this is welcome news for anyone who’s suffering from eco-anxiety. 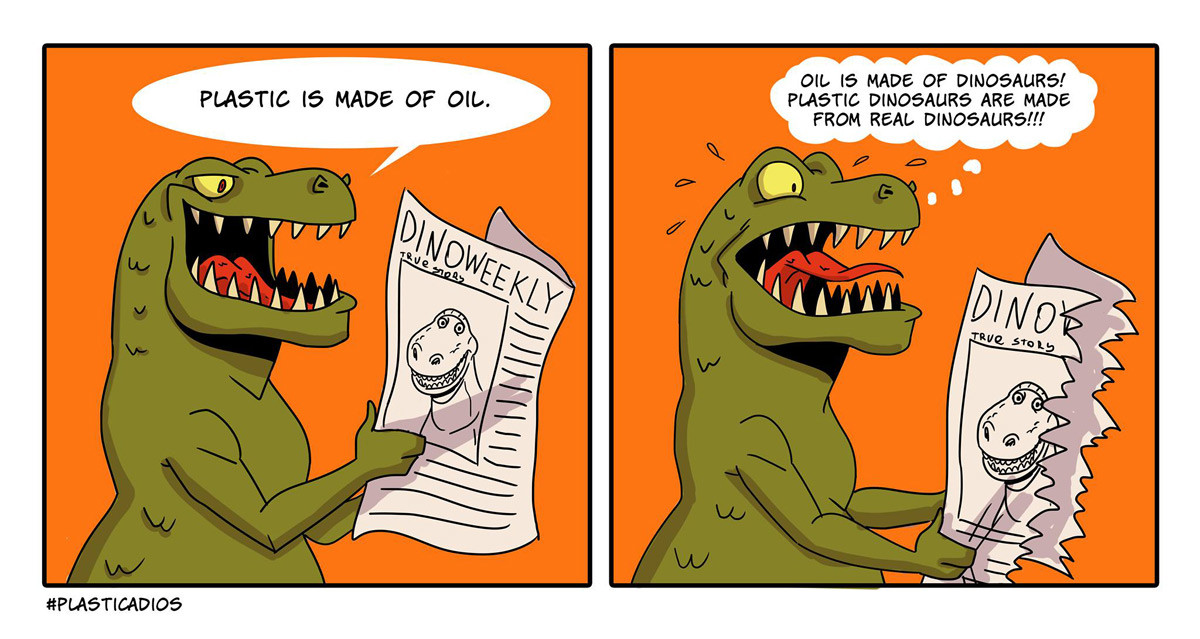 “As of July, 2019, Plastic Adios has begun working with the outside world after having completed an 18-month period of internal and technological structuring and successfully signing our first deal in Almera, Spain. At the moment, Plastic Adios is negotiating in 12 countries, leading petro-chemical holdings, waste disposal operators and investors. The task is simple: we want to establish 10 plants with an overall potential of turning 500,000 tons of plastic waste into fuel on four continents,” Georgy told Russia Beyond.

You too can be part of the change

But you don’t have to be a government or a large-scale industrial producer to be able to peruse Plastic Adios’ technology. While there is a growing number of companies all over the world offering plastic to fuel conversion, what sets Plastic Adios apart from the others is the only SGS-verified (the world standard in technological audit and certification) pyrolysis technology in the world with the PaaS business model, which means cleaning up plastic waste is no longer an expensive chore, but a money-making possibility for everyone – a sort of “Uberizing” of plastic waste disposal. Building recycling plants using patents of other companies working with pyrolysis technologies can cost companies and individuals up to 20 million euros, while Plastic Adios’ PaaS model reduces the cost to 2 million euros.

“In September 2019 we’re launching a crowd-funding campaign to expand to new locations and fitting them out with completely new technology by Plastic Adios. In Russia we’re in talks with the Russian Ecologic Operator and while there are several unsolved questions pertaining to waste disposal plants in the Russian Federation, based on the government’s resolve we think these will be solved soon and we will see Plastic Adios’ technology applied in our home country. Our ultimate goal is to equip hundreds and thousands of recycling facilities with Plastic Adios machinery,” Georgy explained. 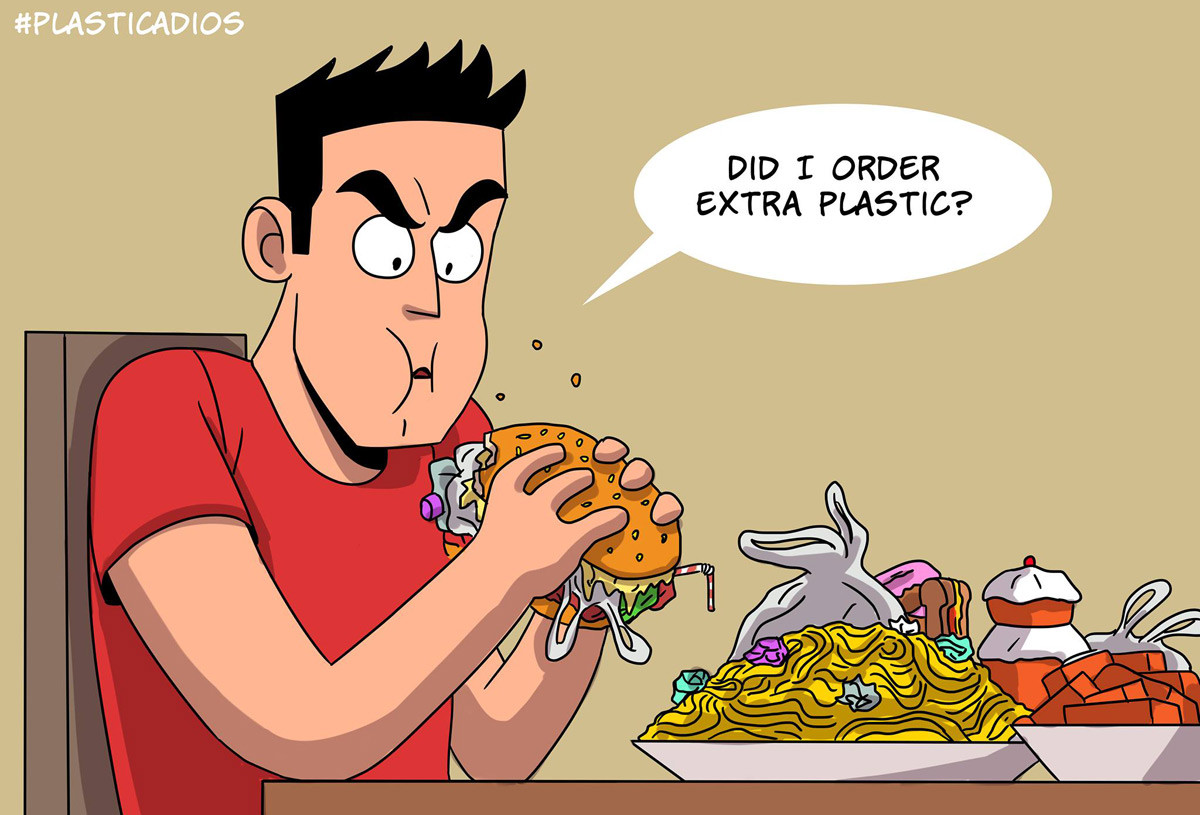 Alexey Kiselev expressed doubt that solving the existing issues with pyrolysis is possible with crowd-funding. However, Plastic Adios’ model goes beyond simple crowd-funding into equity crowd-funding and crowd-investing. This is a large market at the moment, and many investors take part in projects like Plastic Adios not only to help, but also to make a profit. The monetary incentive to make this type of plastic waste recycling is there.

So if you want to do your part to help save the planet, but don’t know where to start, now you can: by becoming a microinvestor at the cost of 25 euro per year with a 15 percent return. 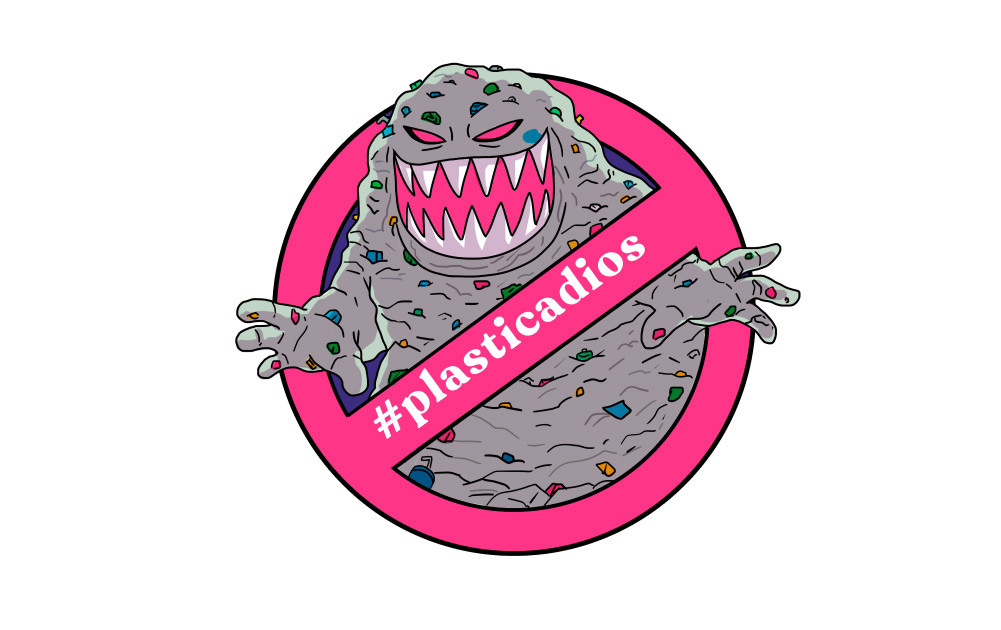 Before launching Plastic Adios, Georgy worked in international industrial, infrastructure and civil construction in Spain, Georgia and Russia. In the lead up to Plastic Adios, Georgy founded a fintech start up called ECRA that focuses on industrial crowd-venturing. ECRA was  created to assist companies in raising venture capital for the ongoing technological upgrade requested currently by ecology oriented European governments and consumers. ECRA and it's team, helped structure and develop Plastic Adios into a leading European recycling tech start-up.

Aside from the Spanish partners, Georgy’s team at ECRA consists of several other Russians who share his vision for ridding the world of plastic in a profitable way: Konstantin Lomakin (finances), Olga Mikhailova (legal), Will Kamalov and Leonid Shabagurdinov (IT), Maxim Ploskonosov and Anton Onosovsky (marketing), Anastasia Omirova (digital), Valentin Hitorin (creative and communications).

So, can we save the world from a “plastacolypse”? Georgy thinks so.

“We still have a chance to win the battle against plastic pollution. But we must act using not populist but technological methods. We must make maximum use of waste and turn it into a source of new products and, of course, profits. As prominent French economist Frédéric Bastiat once said: 'All men's impulses, when motivated by legitimate self-interest, fall into a harmonious social pattern'. And so we strive towards this harmonization between industry and making use of economically beneficial technologies,” Georgy concluded.