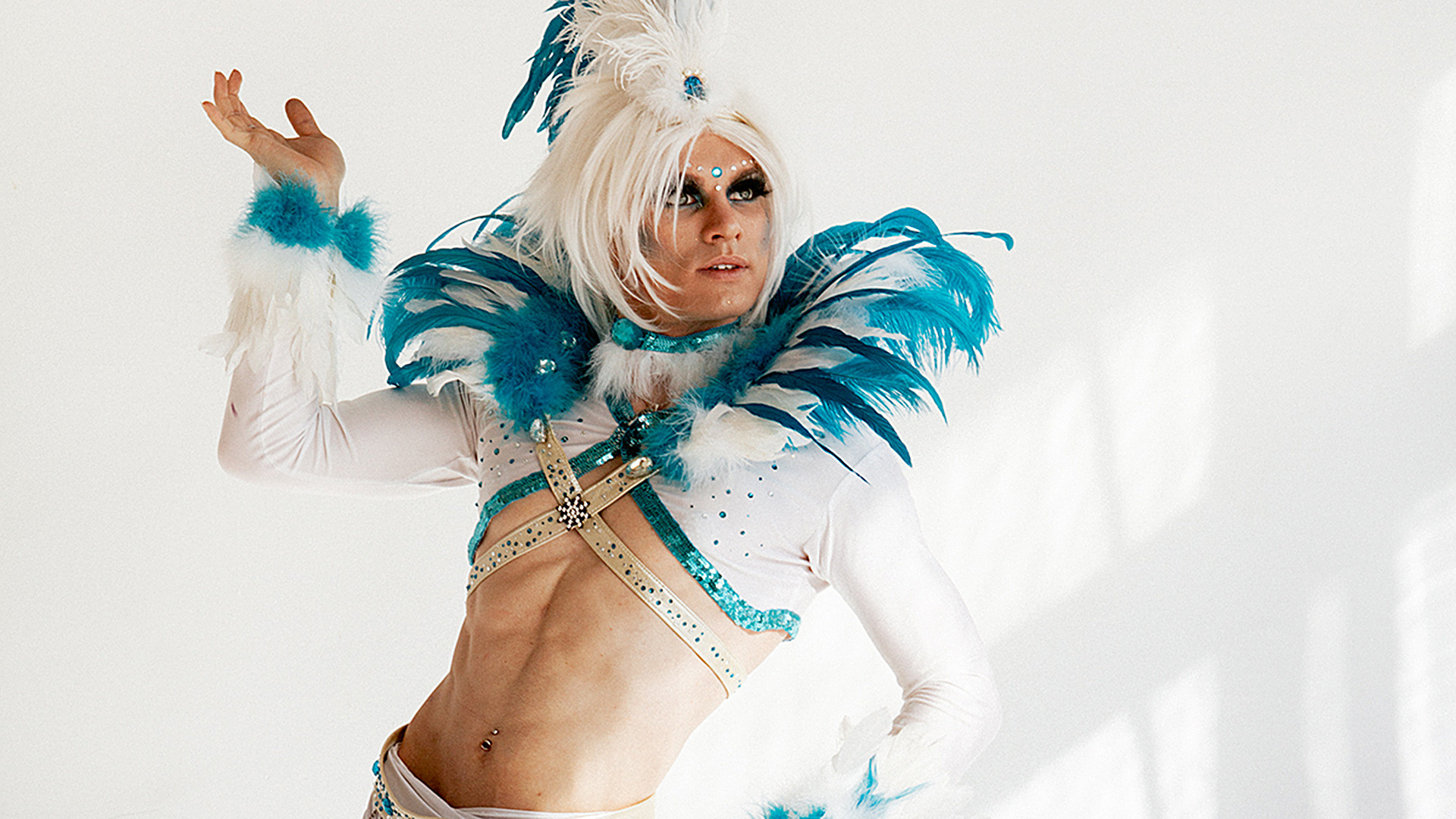 Anastasia Lyskowets
By day he’s an office worker, by night he dances in high heels and feathers to teach people to feel at one with themselves.

“For f***’s sake, stop clenching your legs like a little girl who’s pissed her pants!” the stern voice of the choreographer resounds throughout the dance hall.

Meanwhile, a model-esque guy dressed in a T-shirt and shorts strides broadly from one mirror to another. His hip-swinging catwalk gait is impeded by bubble gum-colored stilettos more than 20 cm high.

“Even if you got diarrhea, your look should scream ‘I’m awesome!’” the choreographer continues his rant. 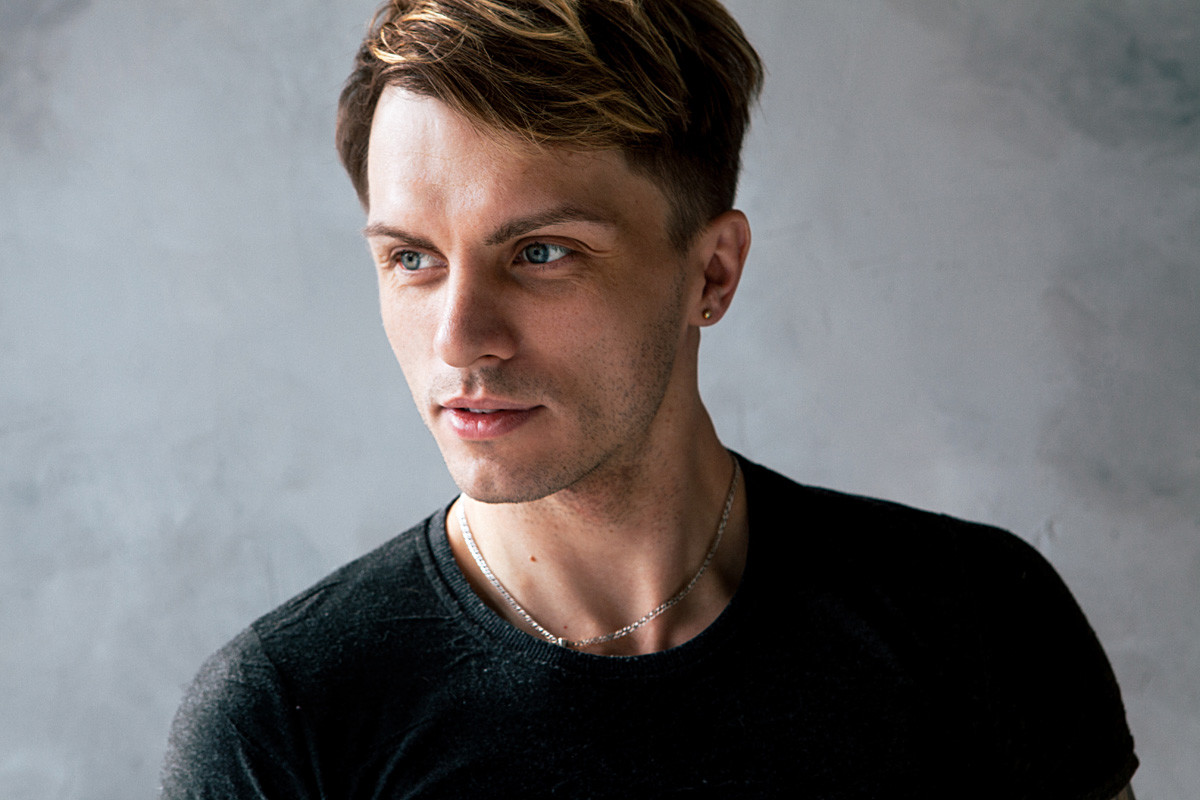 “Yeah, I’m awesome, I hate you!” replies the nonchalant apprentice. With a tired expression, he takes off his non-user-friendly footwear and starts doing the dance that first made him a stage hit a year ago. Having run through it, he eyes the choreographer.

“Hey miss, write that someone ought to kill him. Is your camera heavy? That would do the job,” the instructor addresses me. His face has turned redder than an apoplectic Gordon Ramsay.

“See? He’s the only one who can do anything with me,” his protégé answers haughtily.

That's how Ilya's training takes place — twice a week on Tuesdays and Thursdays. He's 35 years old, and married. By day he is a crisis manager for a firm that sells projectors and screens. By night he is Ellisha Fox, Russia’s first and only male burlesque star.

“Kids usually dream of becoming a pilot, astronaut, or doctor. I had no such plans. I spent my childhood being a child,” Ilya recalls blissfully. There’s an hour to go before training, and we’re sitting in a cafe. He’s wearing a leather jacket with furry shoulders and a fox tail attached to his jeans pocket. Ilya squints a little, himself looking like a sly fox.

He recounts a happy childhood — his parents often took him on holiday, including trips to Europe and the U.S., and he was given ballroom dancing lessons.

In summer before seventh grade, Ilya went to Kiev. There, for the first time in his life, he saw a playbill for Le Lido, the famous French cabaret show. 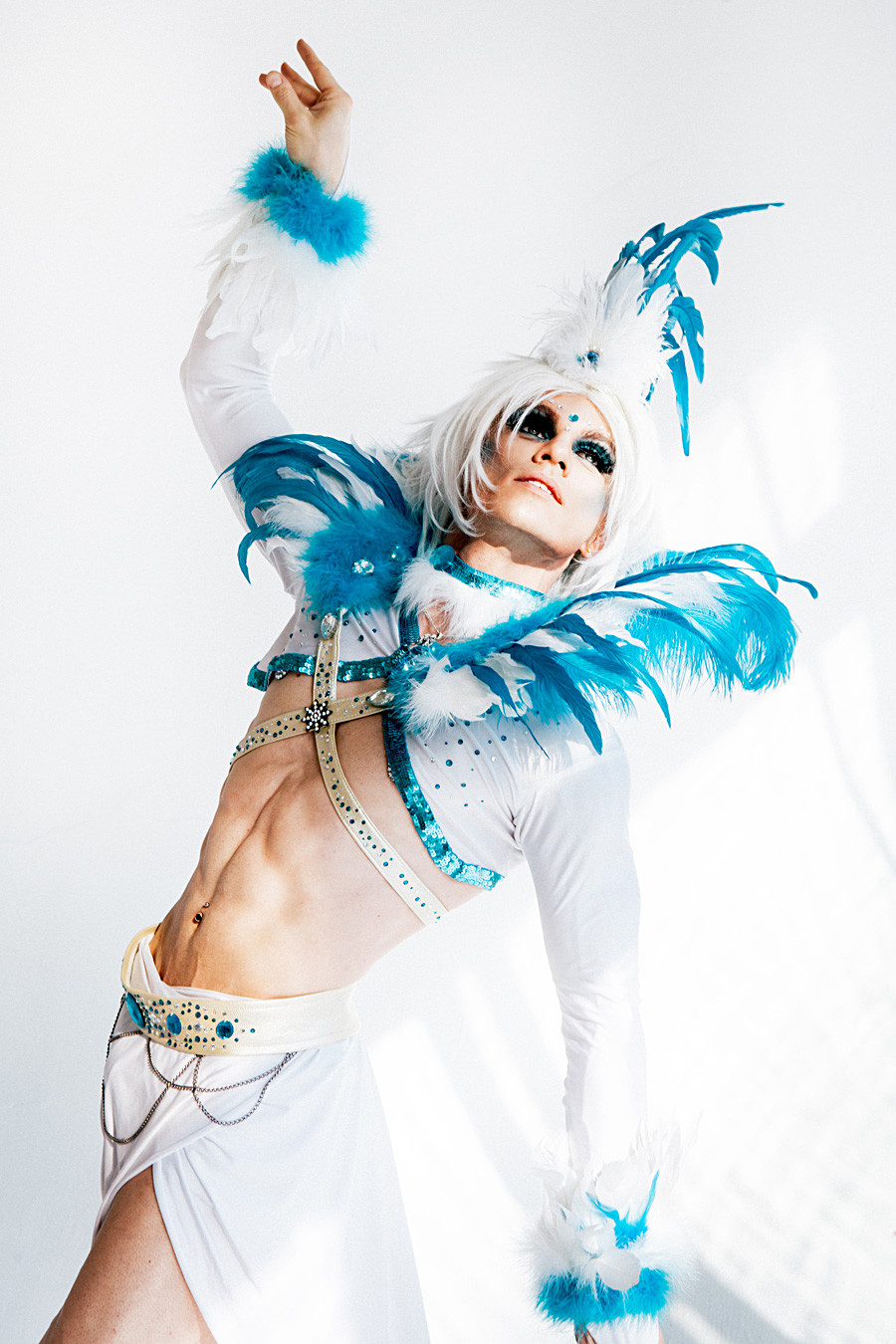 “There was a picture of girls wearing feathers, and I thought it was really cool,” recalls Ilya.

Inspired, after the trip he was desperate to appear in a school production of the musical Cats, but didn’t dare ask his teachers and feared his classmates would mock him.

Soon afterwards, he moved to another school, as did some members of staff, including his drama teacher. It was then that he resolved to try himself in the theater.

“I liked acting, adopting different guises, but my classmates looked at me like I was weird. All they saw was a strange boy who liked theater and sometimes wore cat whiskers. Popular is the last thing you’d call me, especially with girls,” Ilya analyzes his school years. 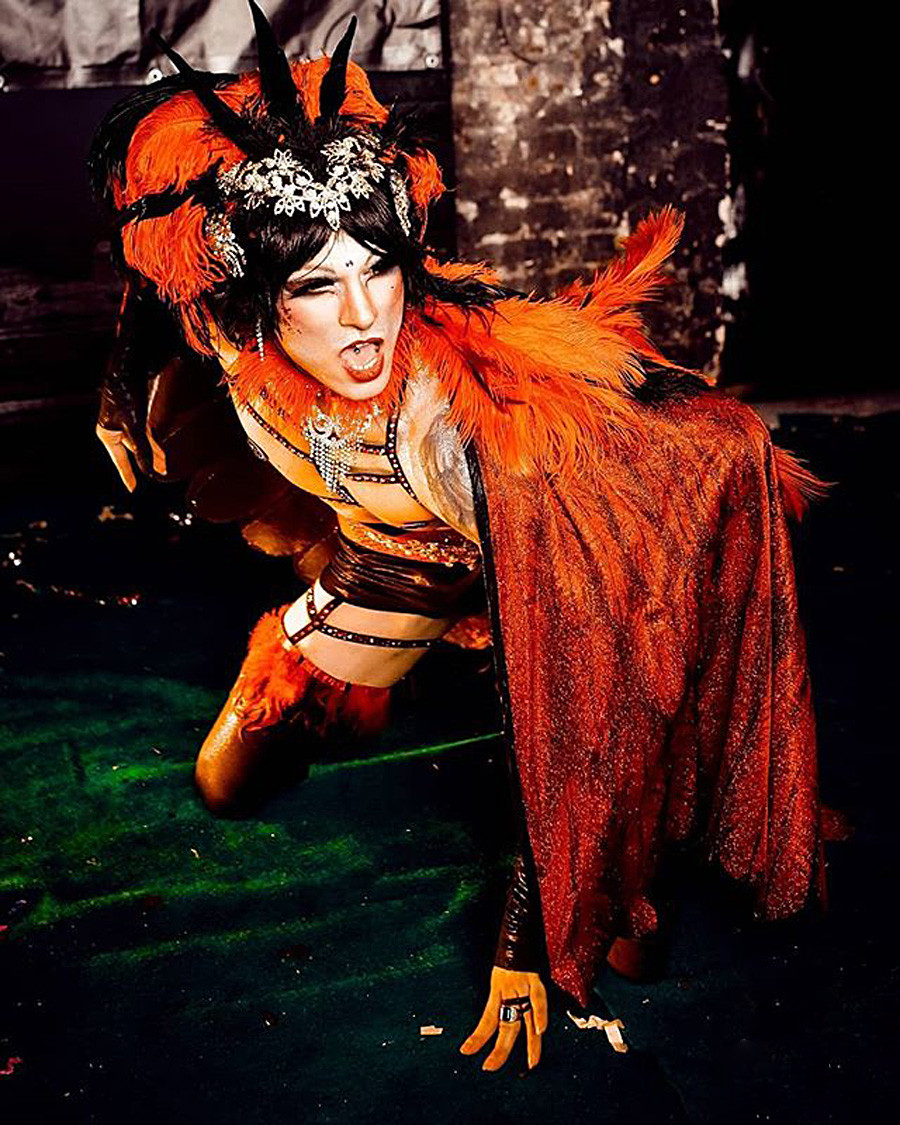 By eleventh grade, Ilya was besotted by Dita Von Teese and the costumes from Show Girls and Moulin Rouge — but after school he entered a construction institute.

“A builder in Russia can always find work, an actor or dancer can’t. After college, I even worked for three years in the industry, but then found jobs in events, media, and b2b. Plus I had two nervous breakdowns, it was great,” he says with a rictus smile.

Ilya de-stressed by dancing at sex and fetish parties, including in a club for transvestites. 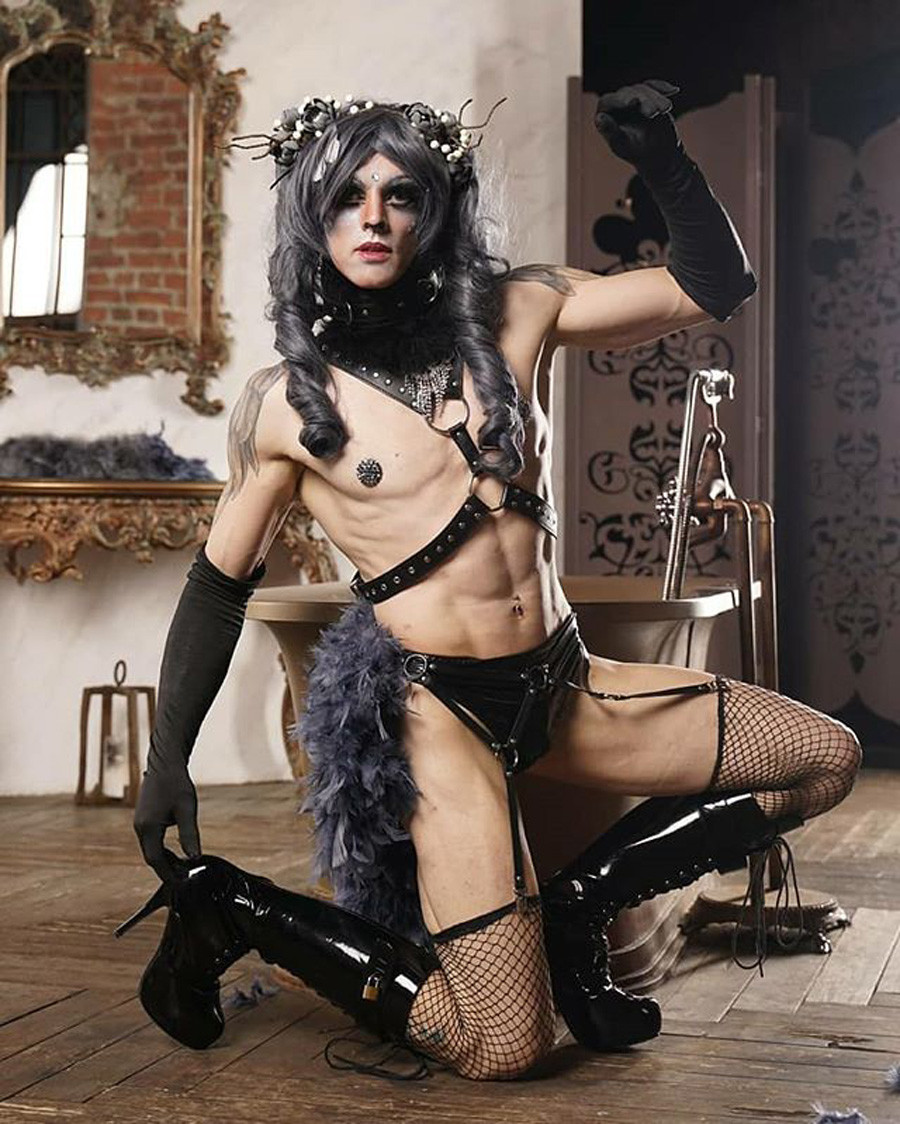 More than a year has passed since Ilya underwent a simple operation (he declines to reveal the details), which was followed by a bout of depression.

“I just didn’t get any joy from what I was doing. At the same time, I compared myself with friends and felt a failure. And then I wondered maybe I’d chosen the wrong path,” Ilya recalls.

He was rescued from the Slough of Despond by some sex party organizers who also had a hand in staging the Ladies of Burlesque show in Moscow. 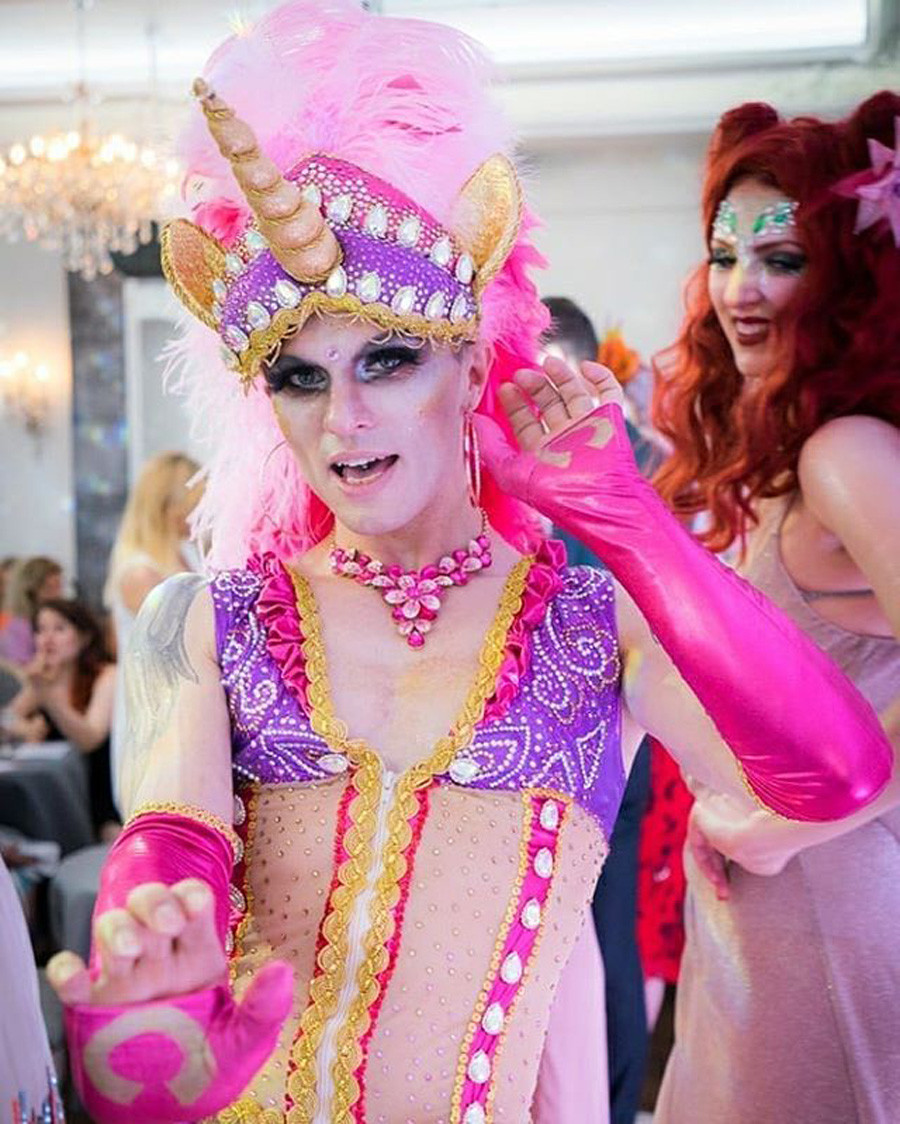 “I got invited to one of the shows. I saw how beautiful all the girls were, how delicious it all smelled. During the interval, they called me up and said I should take part. I refused, of course. I didn’t feel worthy. And then the host went on stage and without my consent announced their first male artist in two months. And he looked at me. I realized I was up sh*t creek without a paddle,” says Ilya.

The first item was cobbled together with the help of the choreographer and costumer. Ilya chose the image of a white-suited prince.

“I wanted to go on stage and show I was classy and seductive like a gorgeous picture in a glossy magazine. My legs were like jelly, but thankfully everyone applauded. That was the push I needed,” says the artist.

“Is that a man?” my friend asks to the sound of clapping hands — more effusive than for other artists. Dressed in stockings and a short black dress, Ilya makes a rousing entrance on stage. His heels are a perfect fit.

“I can’t watch,” he says tetchily and turns away. 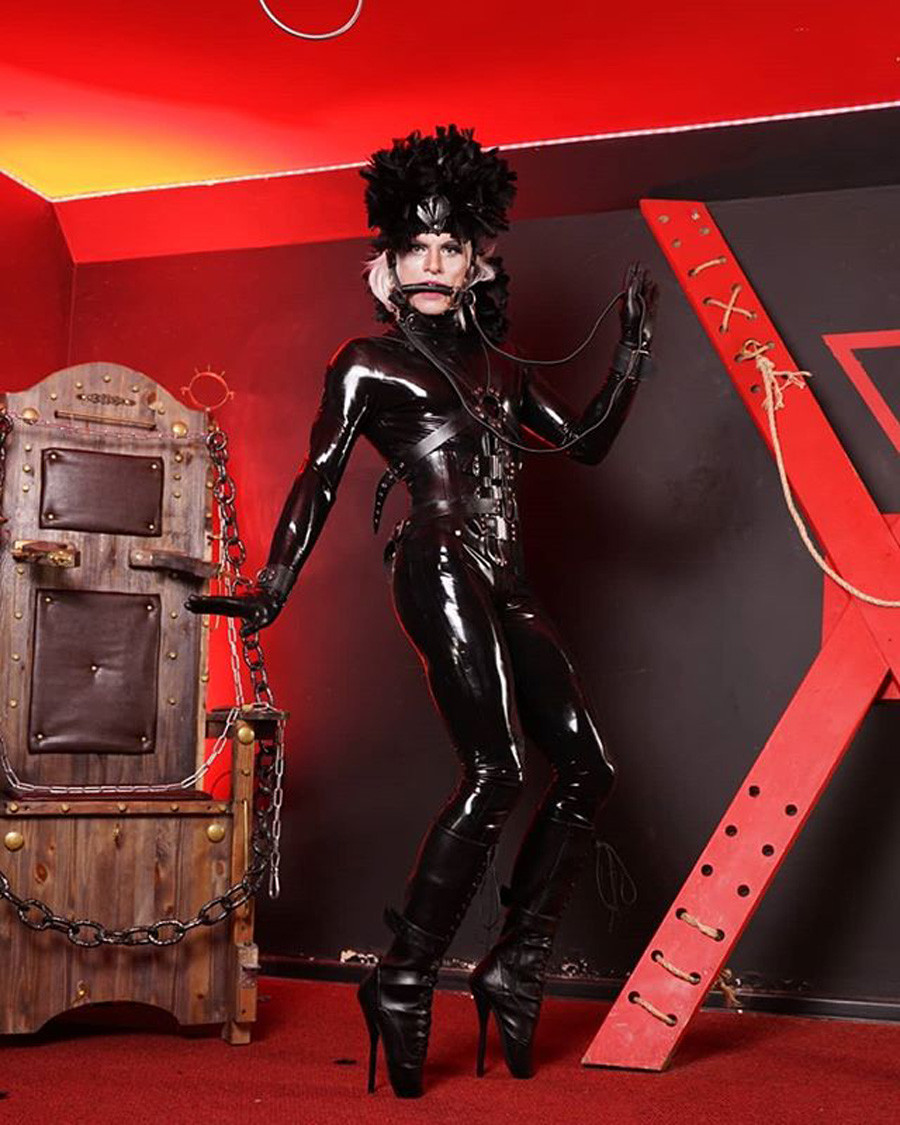 As if sensing the bad blood, Ellisha tries to win over the unhappy punter with some jazz music, stroking the man’s shoulder with a glove. This doesn’t work. Then to boos and jeers, the artist begins to undress.

“It’s a normal reaction. If you don’t like something, don’t look. It happens sometimes, I can’t complain about it. I’m on stage, I’m an artist. But that reaction is less common now,” Ilya explains such behavior.

His wife supports his undertaking, and even helps him design costumes for his performances. As for his mother, he doesn’t mention burlesque. She thinks he dances in a strip club. And with his father, burlesque is a no-go topic. 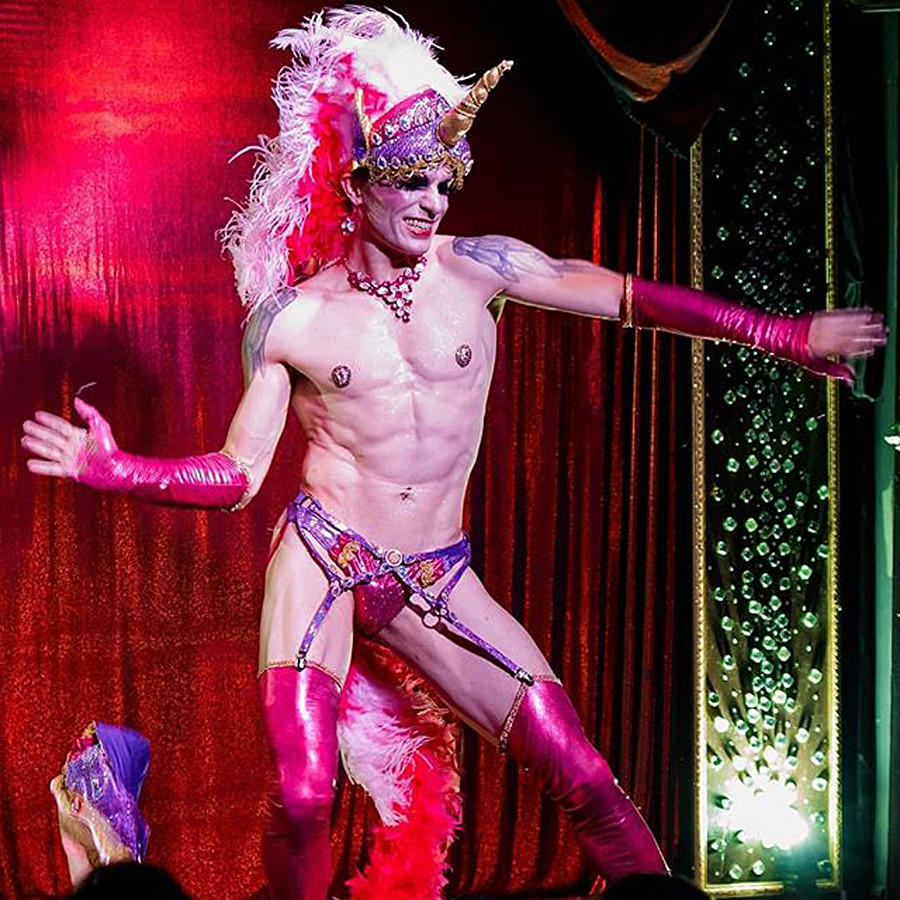 “They wanted me to become a good builder. And now mom’s always saying I stand out too much and overgroom myself. As if a man should look and walk like a monkey,” he says sadly.

Ilya would like to become an actor one day, but is reluctant to give up burlesque. He says that every performance at the Ladies of Burlesque fills him with euphoria for days afterwards. He even likes the fact that professional dancers don’t take burlesque artists seriously. It makes him feel like a “slumdog Beyoncé” who’s achieved everything off their own back. 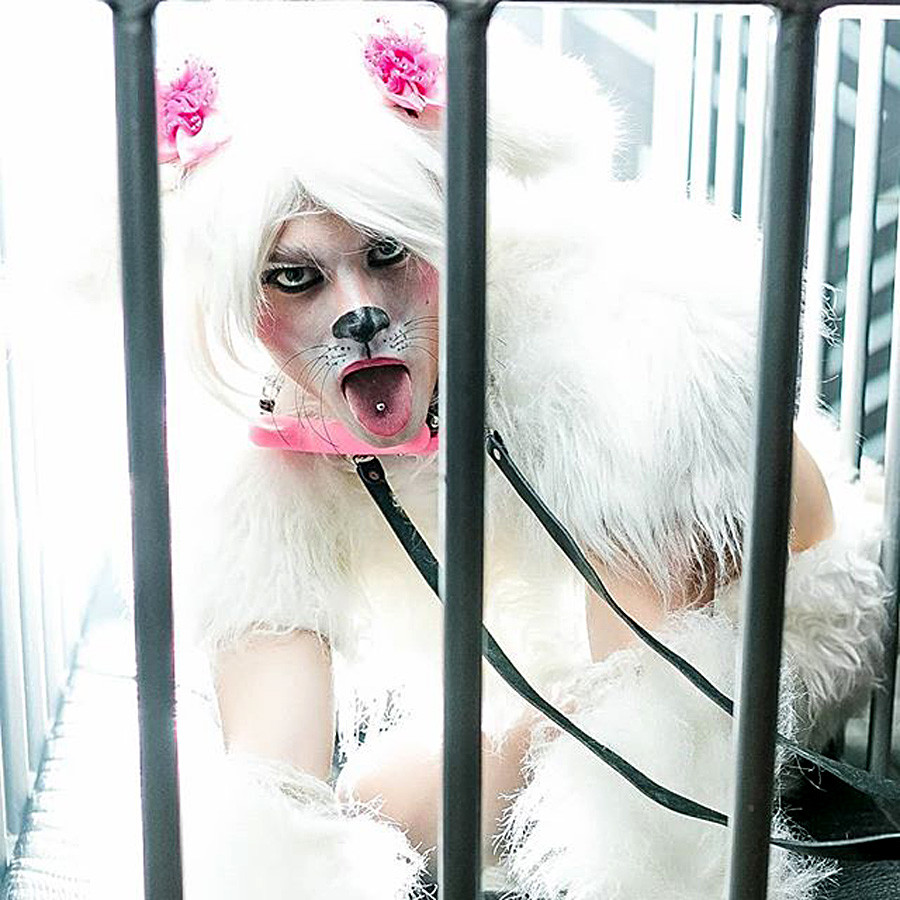 “In my performances I try to convey the message that it’s OK to be different, everyone can be who they want, there’s no need to be embarrassed or ashamed. You mustn’t be aggressive and morally condemn someone just because he’s different from the rest,” believes Ilya. “All you can do is live in harmony with yourself, then others will start to perceive it as normal. I hope they do.”