Ever been to a Russian kinky sex party? 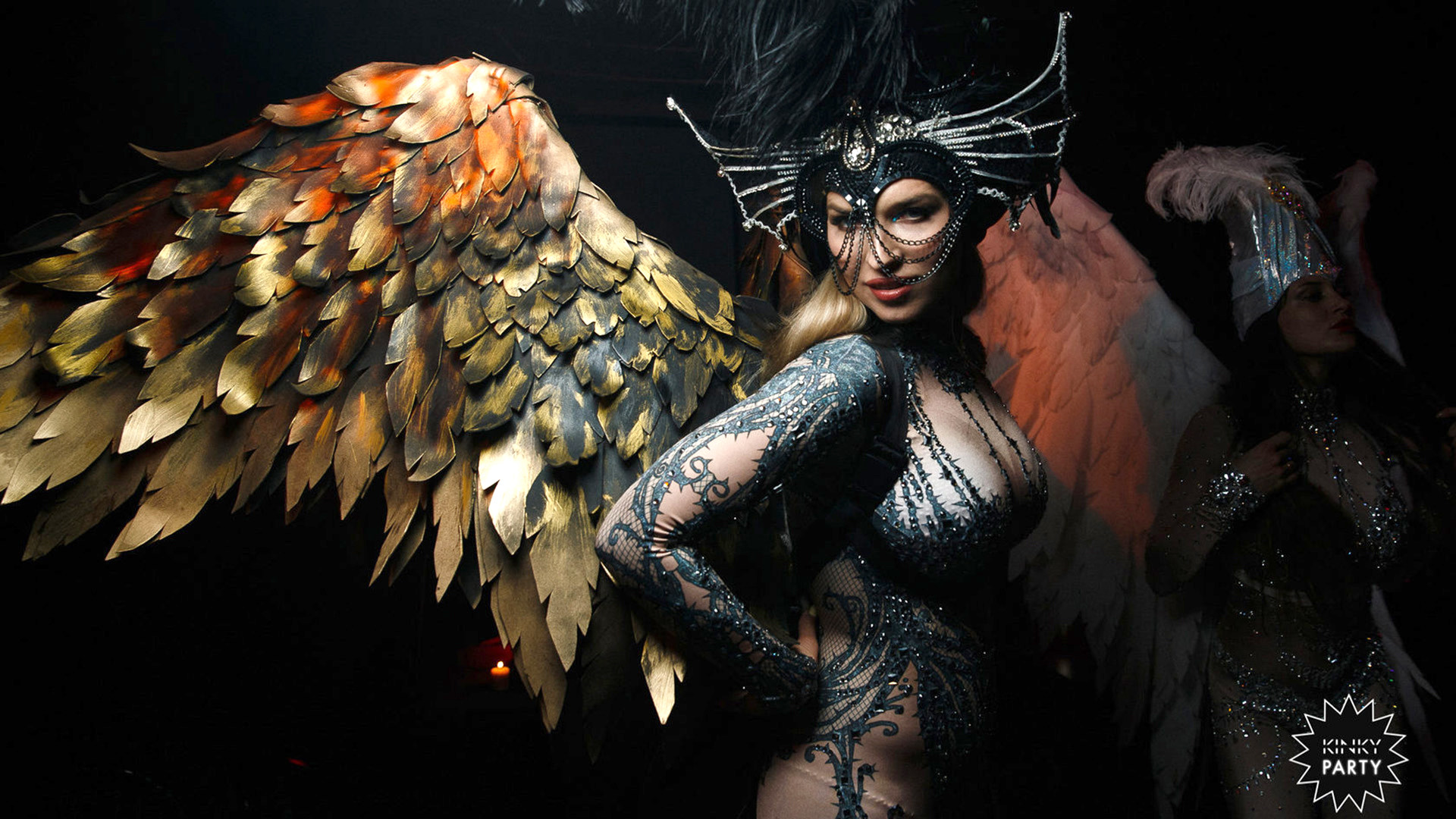 Kinky Russia
Our reporter learned about such parties only a few weeks ago, and has since been doing some hands-on research, all too literally. Note: The article contains adult content.

In a usual Moscow shopping mall, not far from a store selling pillows and decorative lamps, there is a dressing room for pop stars, no less. Draped over the coat-hangers are dresses bearing feathers, flowers, and spangles. On some small shelves lie artificial horns, wings, and vintage jewelry worth upwards of €150. Young couples bustle around the hangers, giggling and touching the garish costumes.

In the corner stand two make-up tables over which cosmetics are randomly scattered. Here, potential party-goers can rent a costume or have their face painted by a make-up artist. A rather plain brunette draws leopard spots onto the face of a guy with model looks. His clothes, consisting of short pants and a jacket, are similarly patterned. Looking at me, he somewhat nervously introduces himself as Dmitry and immediately confesses that he is doing "this" for the first time. On learning that I too have a leopard dress and am a newbie like him, he happily suggests going to the party together. 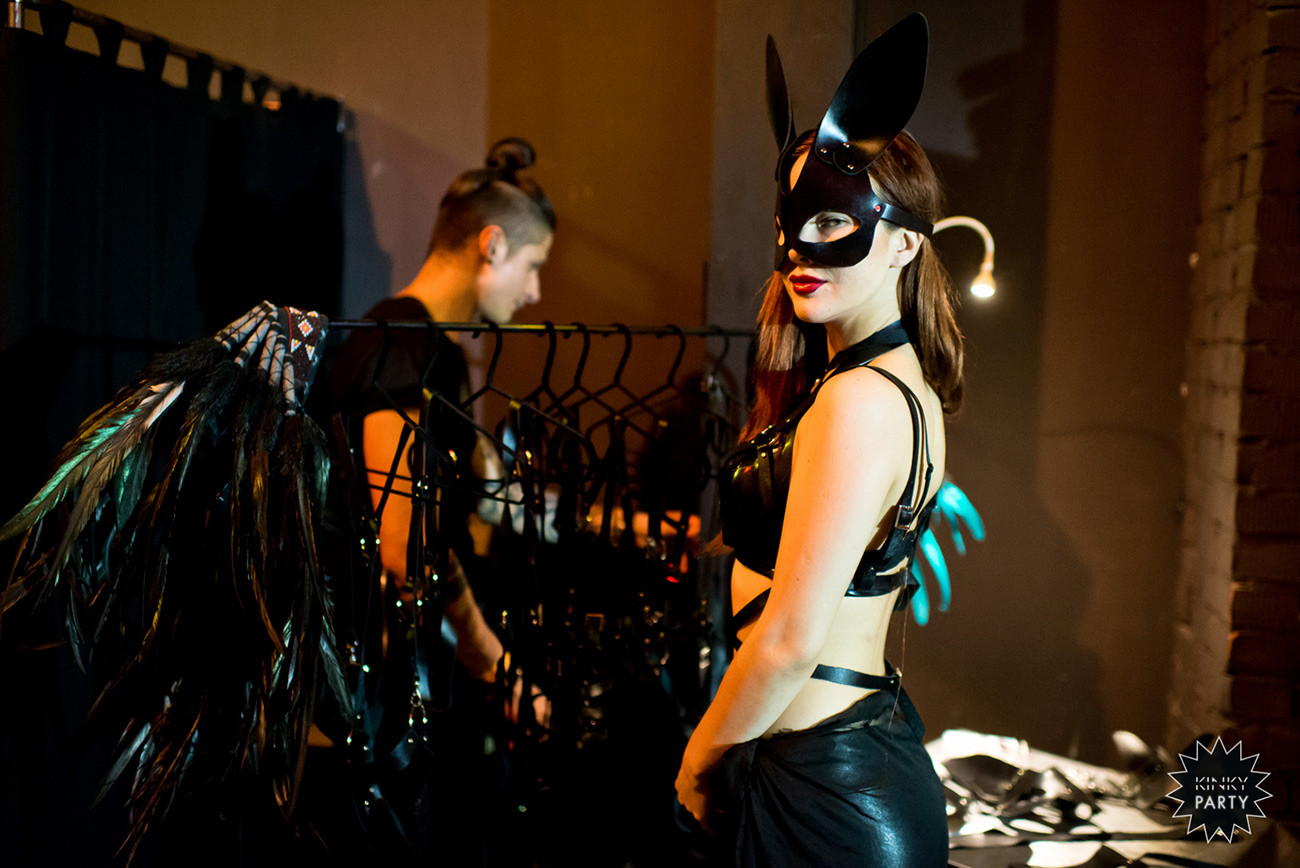 The make-up artist performs her magic on me, politely warning that my dress is not revealing enough, so it’s better to get rid of any stockings and pantyhose, since they’ll get removed anyway.

And so it is that Dmitry and I, two strangers with something leopardy in common, head for our first Kinky party. The theme is flora and fauna. Bring it on.

Waiting in line in the small anteroom of the club (with the symbolic name “Truth”) are leopards, bats, shamans, and even a cow – a short blonde in a body shirt and horns, holding a milk can. Many hands are shaking, and some don’t even dare to look up, afraid of encountering someone they might know. Others are getting dressed right there on the spot, building their animal persona piece by piece. On the walls are posters with the basic rules of the party: Anything is possible within the scope of Russian law. Want something? Ask. But remember that no means no.

In the entrance to the main hall, a cabbage white butterfly shines a flashlight on the guests, and decides who to let into the animal kingdom. The make-up artist was right to turn my dress into a mini-skirt. But for some, a costume upgrade doesn’t help – all in all, about 15% of guests are sent home for non-compliance with the strict dress code, with a refund later. 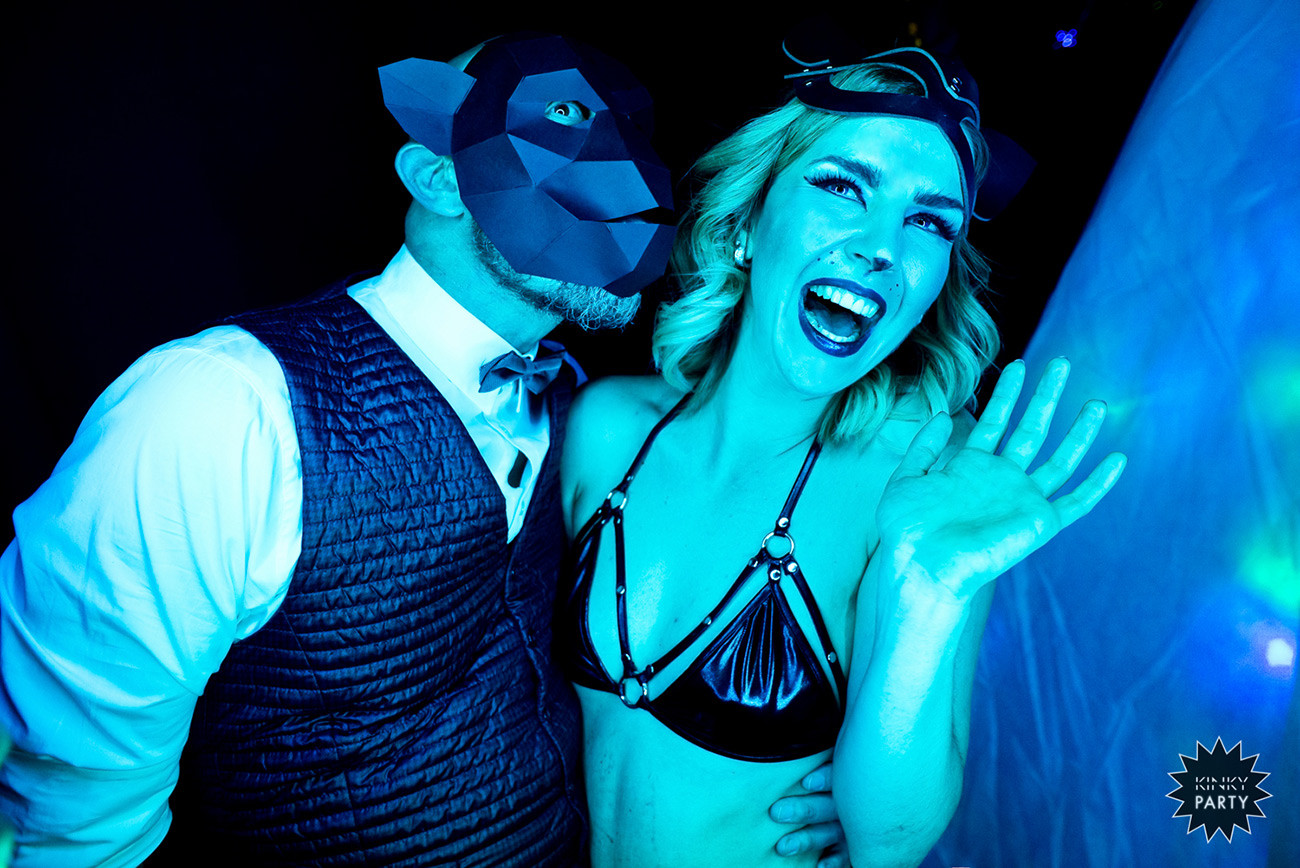 Not everyone can get into a kinky party – before buying a ticket, hopefuls have to fill out a questionnaire and attach links to social media pages, which the administration uses as face (and other) control.

Once inside the hall, all restraint and nerves are cast to the wind. Some first-comers start flirting immediately, while others head for the bar for a shot of extra courage.

On the main stage, a woman dressed as a cat crouches on all fours, next to her are two bowls of cereal and milk. Out of curiosity, I feed her with my own hands, and in response she purrs and rubs up against my leg. I get a strange feeling that I’m somehow now responsible for this “pet.”

Not far from the stage is a small pool with floating balls, from which only two pairs of feet are visible. On the other side stands a cage inside which a corseted woman is dancing.

Studying the terrain, I meet the eye of another girl who seems horribly familiar. A second later, it dawns on me that it’s the make-up artist, having swapped her jeans and T-shirt for a dress in the form of a fishing net with a couple of stickers on her nipples. She examines my final image, and runs an approving hand over my chest. In response to my startled look, she replies: “Come on, don’t be shy. You can be yourself here.” And I realize that the "rules" are more like flexible guidelines. 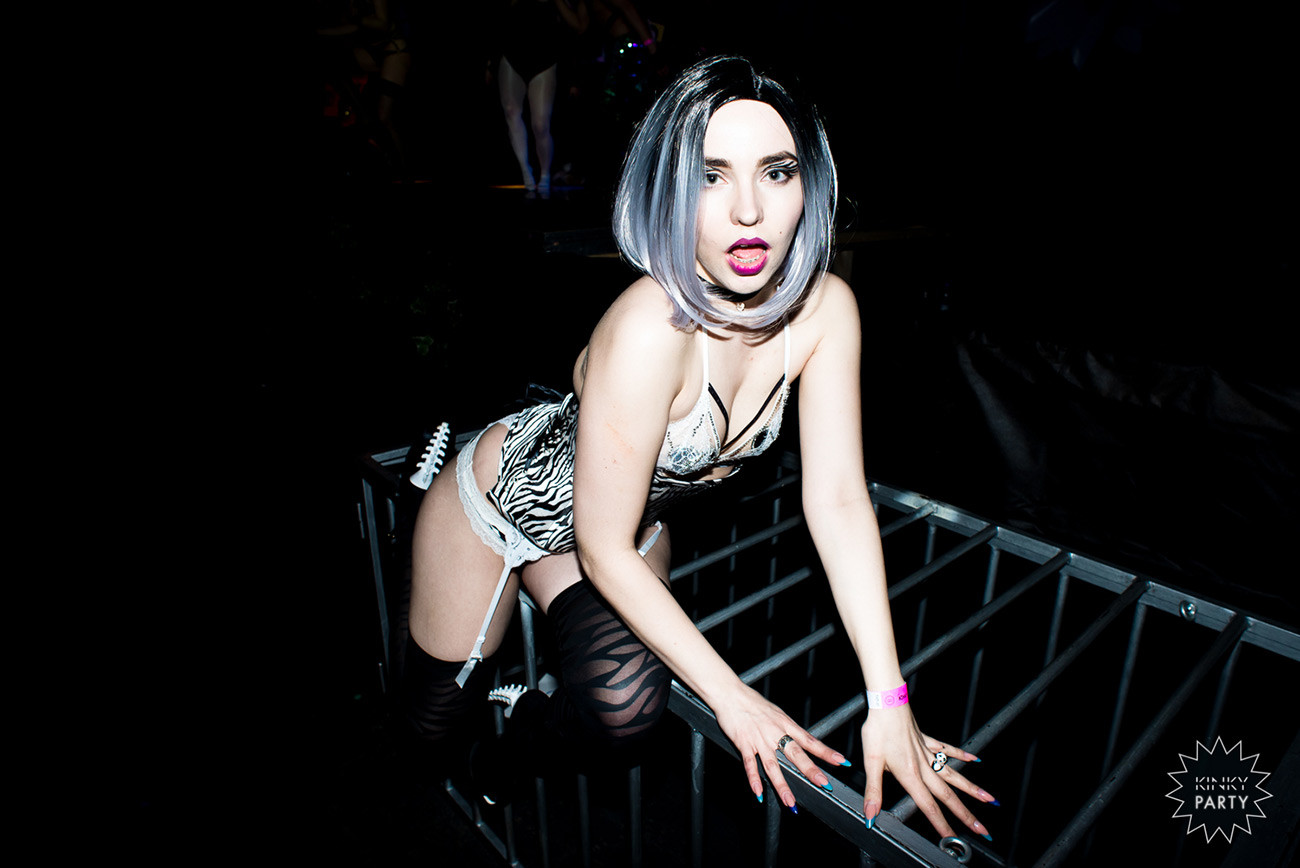 Meanwhile, one of the now familiar leopards is downing a second or third cocktail, observing a group of girls kissing – in the tangle of arms and legs, it’s not clear how many, probably about five. All the best viewing points have been occupied by onlookers in eager anticipation.

Dmitry says that he’s been in a relationship with a woman for over 15 years, but tonight she’s away somewhere – hence the opportunity to try something new.

“Is a long-term relationship really a reason to be unfaithful?” But then I suddenly remember where I am and how inappropriate the question sounds.

“Sure it is. You’re still young. But when you grow up, you’ll see the light,” he replies. Before he disappears into the swelling crowd, he throws another phrase in my direction: “Actually, maybe next time I’ll bring my wife along.” I don’t see him again.

Back in the main hall, another group of girls has formed a semicircle; men are standing in front of them. It’s a game to help newcomers meet each other and break the ice. Somehow, I end up getting sucked into this strange ritual.

First of all, the guys have to make animal sounds, it is announced by the on-stage compere. The hall rings out with male growling. Next, the girls take a step to the left to face a new partner and a new assignment. In front of me is a guy in a rabbit mask, and my task is to force him to do something with me. To my right, a swan princess is already kissing her opposite number. Off the top of my head, I ask the rabbit to spank me. While he’s performing his mission, out of curiosity I turn to check out the guy next to me – and he looks at me slyly. Cute as hell. Damn, what is this place? 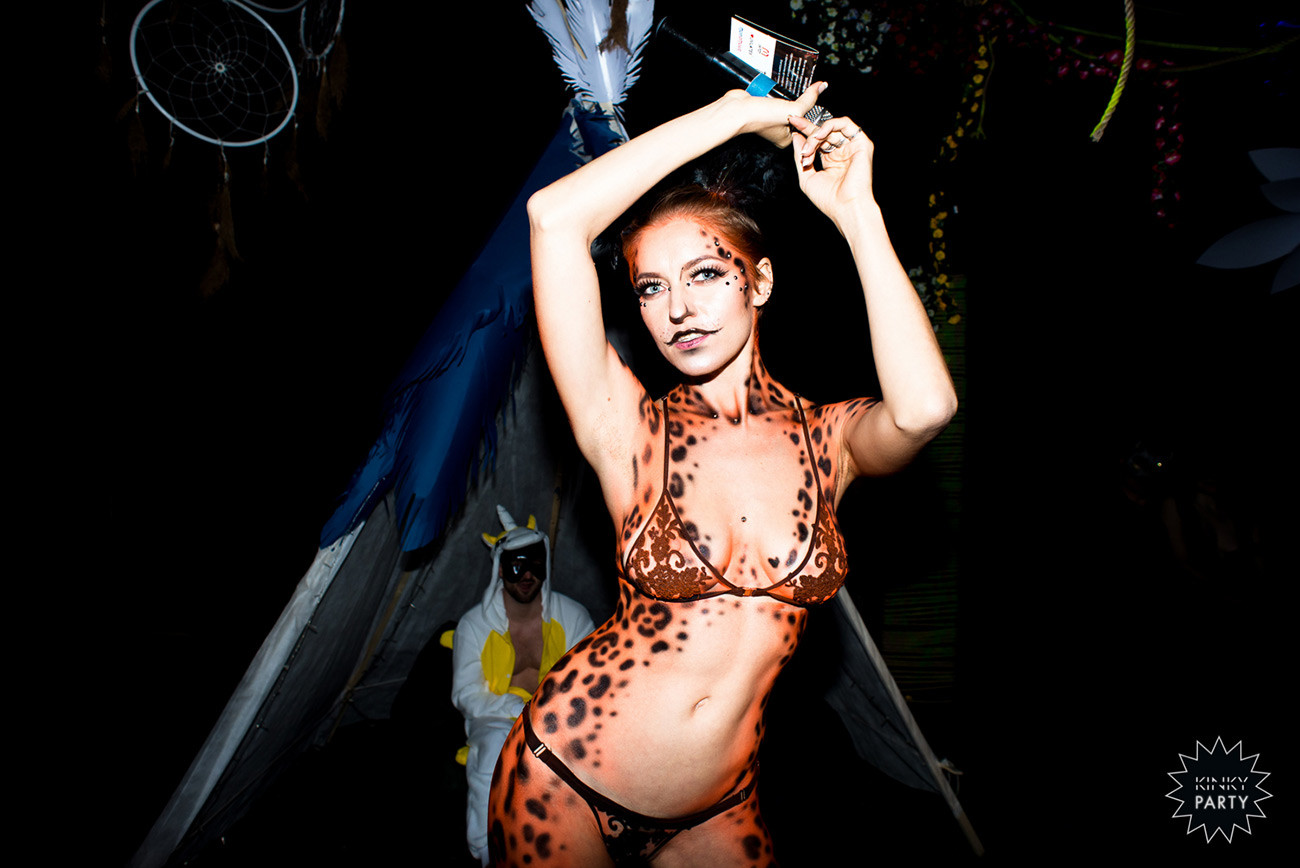 Another step to the left, and we are handed lollipops shaped like genitalia. The final task is for us to lick in unison. For most couples, this ends in a kiss. I’m no exception.

When I at last remember that I’m on an editorial assignment and open my eyes, half of the couples have already relocated to the sofas, ridding themselves of some cumbersome clothes and accessories along the way. My lollipop partner reports that he came here with a girl and is waiting for her to finish a "squirting master-class." I’m invited to join them later. In response to my “I’ll think about it,” his hand tries to sneak under my bra. On encountering an obstacle in the form of a weakly uttered “no,” he kisses me again and sets off to look for his girlfriend.

“I’m here for work,” I force myself to say, and climb up to the second floor.

The dark knight rises (in more ways than one)

The second floor consists of several sofas and two massage tables, on which oiled, naked women are lying face down. Each is having a four-hands massage delivered by men. Of particular note is a large guy in a Batman mask. He asks the “client” to roll onto her back, then kisses her breasts, and reaches for her groin. After a couple of minutes, about ten unperturbed spectators observe a stream of discharge from between her legs. Batman hands her a napkin and asks:

“You’re good at this, are you sure it’s your first time? Call me if there’s anything,” and, changing the sheet, invites the next woman to the table. 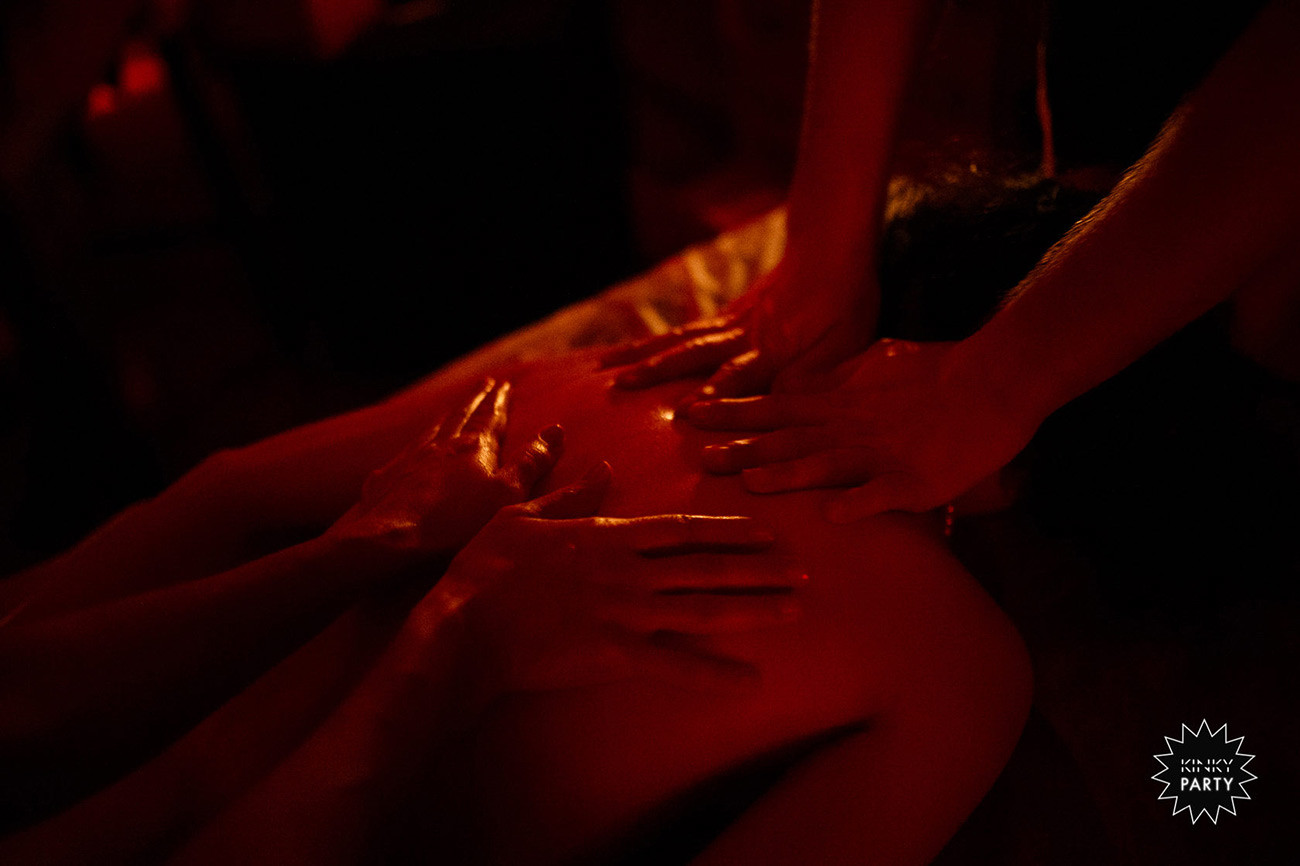 By this time, there are no more places on the sofas. Couples, threesomes, and the occasional foursome have taken over the walls and any free corner. There are practically no same-sex couples. Everyone is young, under 35.

On one of the sofas, two girls sit at opposite ends. One, legs crossed, stares into the void, the other, curled up, is crying. When asked what’s wrong, she says everything’s fine and doesn’t want to be touched. In the middle of the same sofa, a couple is having sex, blissfully unaware of anyone’s tears.

The second floor affords a fine view of the burlesque dancing girls, but almost no one is paying any attention to that. People gradually depart the dance floor, grabbing condoms, lubricants, gloves, and chlorhexidine from special boxes as they go. By the middle of the party, it all starts to seem natural, as if you’re on a regular beach or in a public bath-house. 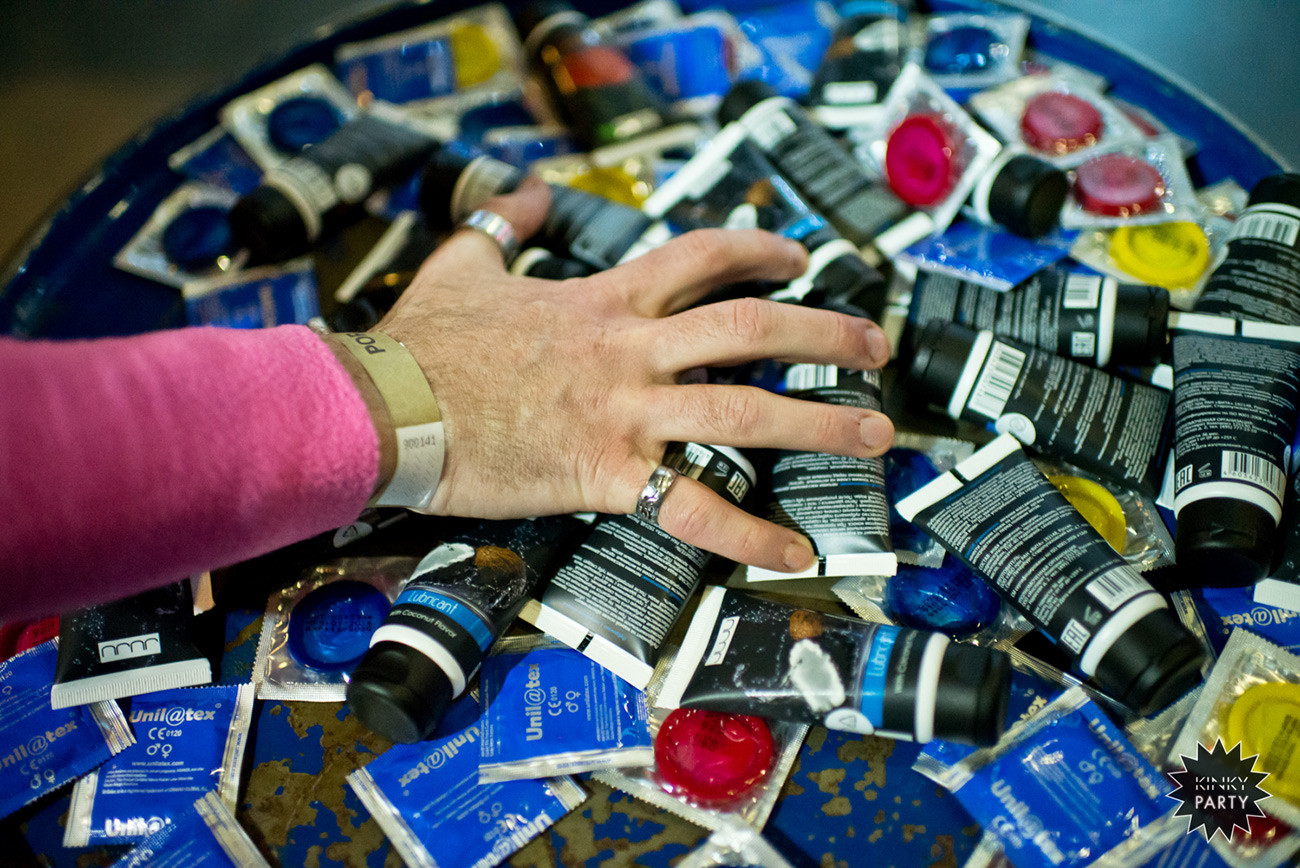 Over in the corner, some young people are trying to flog canisters of laughing gas, arranged by the club adminstration itself (according to the Kinky Russia press service).

...ain't nothing but mammals

On the ground floor, the “cow” from face control has been stripped and tied up by the legs from the ceiling. She is being watched by several onlookers, no one else cares. The moans and screams sometimes seem to drown out the music.

“I specifically asked for more pain, I even had marks left under and above my chest. When you’re totally tied up, you realize you’re completely surrendering yourself to another person. At this moment, I feel genuine calm,” the girl describes her bondage impressions.

It’s not her first such party. According to her, half of the visitors here are couples looking for a spot of variety, or experimenters trying to find themselves and learning to have fun. People also come here to rid themselves of complexes – it’s not every day that you stroll naked in front of a crowd of people with a pair of fake horns on your head. 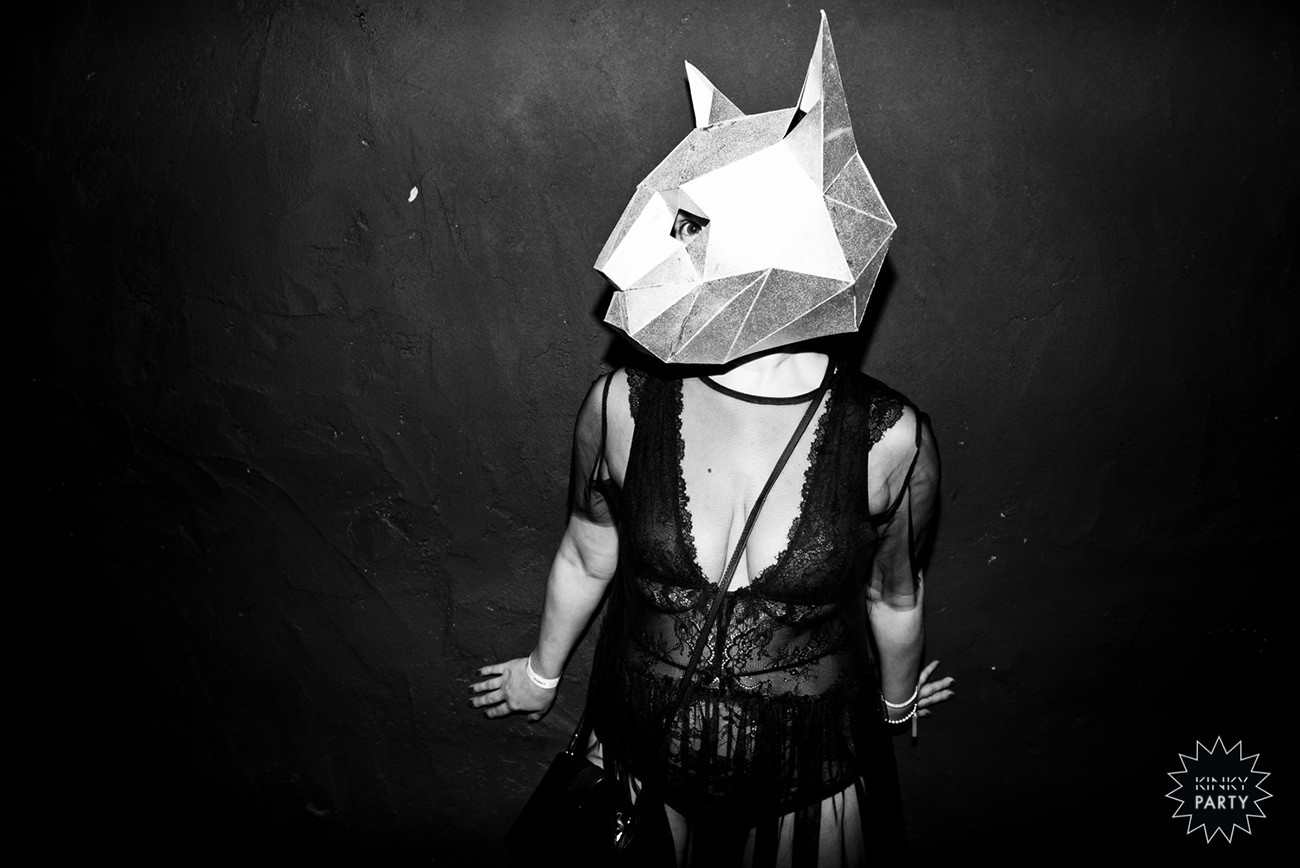 The girl says that around 70% of party-goers have sex, but it’s not mandatory.

“Someone might decide against it, and spend the whole night with a cocktail on the dance floor, and they’ll be fine. We’re Russians, we love drinking,” she states and skips away to dance with friends.

Kinky Russia parties are just three years old, says co-founder Taya Reshetnikova, so participants are more enthusiastic about it in other countries where the format is old-hat. On the whole, same-sex couples prefer to have a more private sex life for fear of being judged.

At the same time, Eyes Wide Shut-style parties, featuring cloaks, evening gowns, and Venetian masks, are particularly popular in Russia. Taya says that one time they held a cross-dress party, where the guys dressed as girls and vice versa, but it didn’t catch on. Hard to believe, but it was too exotic for Russian guests. 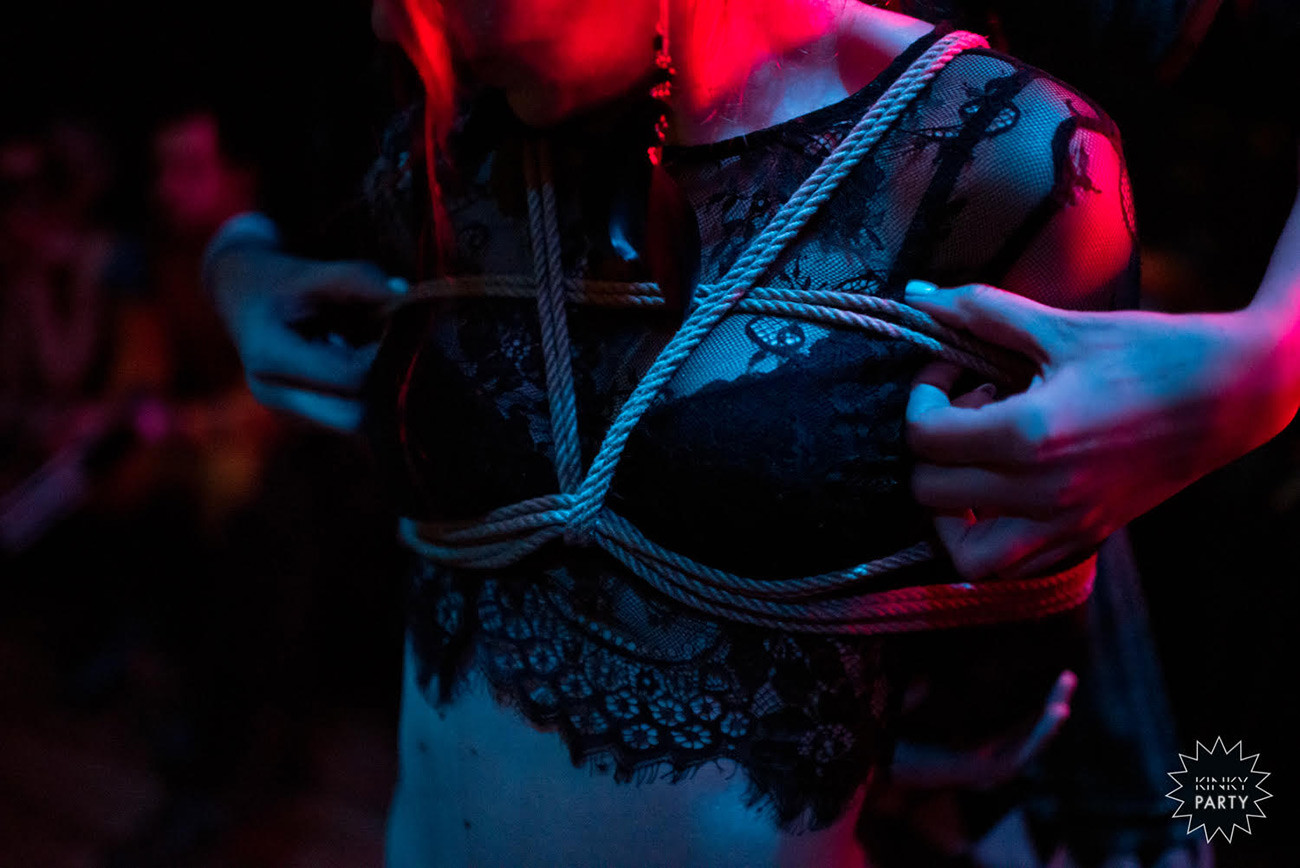 By the exit, I see a frail blonde woman of around 40 holding a dustpan and brush. It’s not a sexy maid’s outfit – she really is a cleaner. The woman picks up used condoms and confetti, trying not to look at what’s going on around. But when she involuntarily does, she automatically covers her mouth with her hand, half in surprise, half in horror.

I have a question. What does it feel like to work as a cleaner to feed her children, and at the same time have to see people around her having sex?

“It’s horrible. They’re animals, not people. That’s how it is these days,” she replies and goes outside for a cigarette.

It’s cold and unpleasant out in the street. I take out my phone and see five missed calls from my mother. I need to call her back and go home – to the land of human beings.