Life at the North Pole — how do Russians do it? 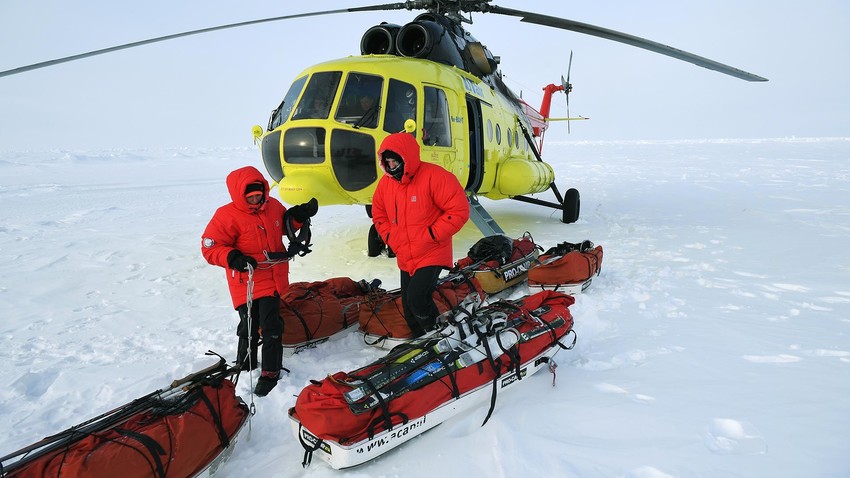 Maxim Blinov/Sputnik
“I have never experienced such hunger,” recalled voyager Fyodor Konyukhov. We explore why and how Russians started journeying to the North Pole, and what it’s like there today.

What happens when an attempt to do the impossible ends in tragedy? For Russians, it means only one thing: try again.

Due to poor planning, a 36-year-old Russian hydrographer has had to spend two winters in a row aboard a schooner in the Arctic. He is suffering from scurvy. His patience at breaking point, he decides to abandon the ship and head for the pole. Having prepared the dog sleds, he and two crewmates plunge into the white void. After a week, he can no longer stand upright, and asks to be tied to the sleigh. A few days later, he dies. The pole is still 900 km away. The expedition comes to an end.

This was 1914, and the hydrographer’s name was Georgy Sedov — the first Russian to attempt to conquer the North Pole, but not the first person in the world to die in pursuit of this goal.

Who discovered the North Pole? 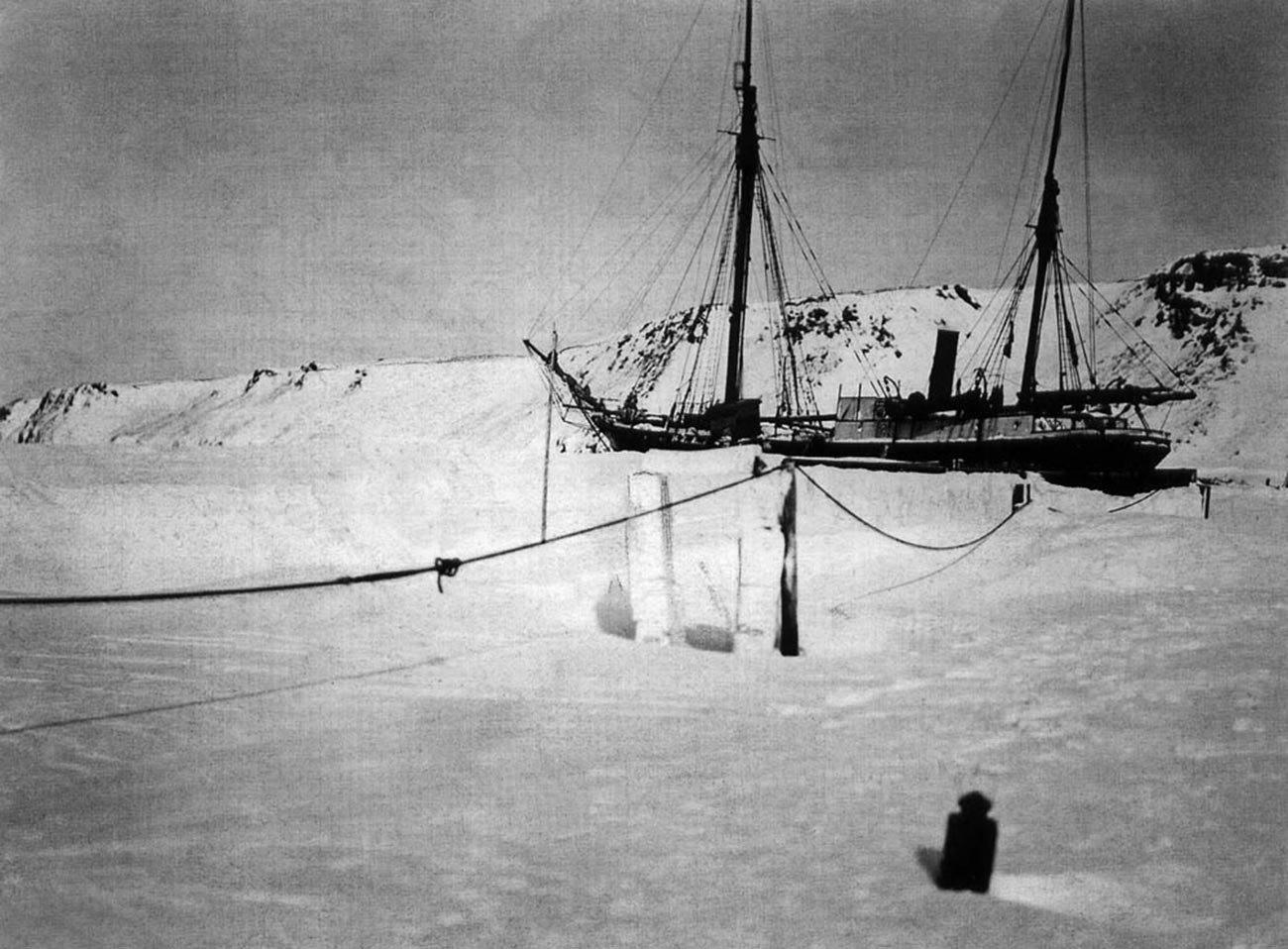 Six years before Sedov, US explorer Frederick Cook tried to reach the pole by dog ​​sled. He claimed to have achieved it, but could not provide any conclusive evidence. Many refused to believe Cook — which, in his own words, caused him to suffer from mental depression. The following year, US engineer Robert Peary made a similar claim, and until 1988, US publications called him the discoverer of the North Pole. But a review of his diary, commissioned by the National Geographic Society, concluded that Peary’s evidence was also debatable.

In the Soviet Union, no one believed either Cook’s or Peary’s account. Then in 1937, Stalin approved a Soviet expedition to the Arctic under which four polar explorers would be stationed at the North Pole-1 research base, drifting on an ice floe. The expedition was needed to collect data for the further development of the Northern Sea Route, and the Arctic as a whole. 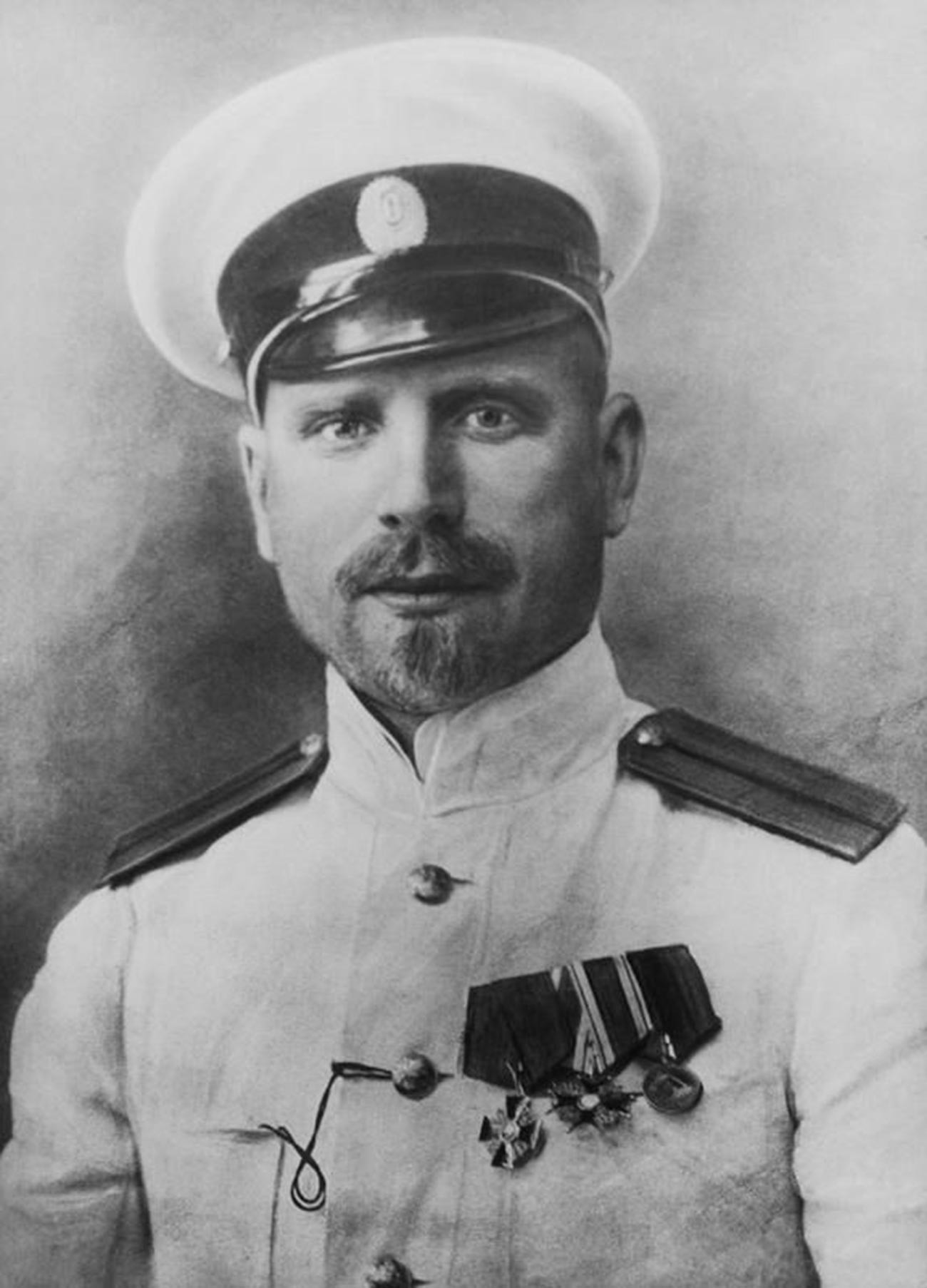 The scientists were delivered to the station by aircraft based on Rudolf Island, 900 km from the pole (the exact spot where Sedov had died years earlier). “Give us food for two years,” said Ivan Papanin, head of the expedition. As a result, the provisions for the expedition weighed five tons. However, there was no cook or doctor among the crew — the polar explorers would have to service themselves in that regard. 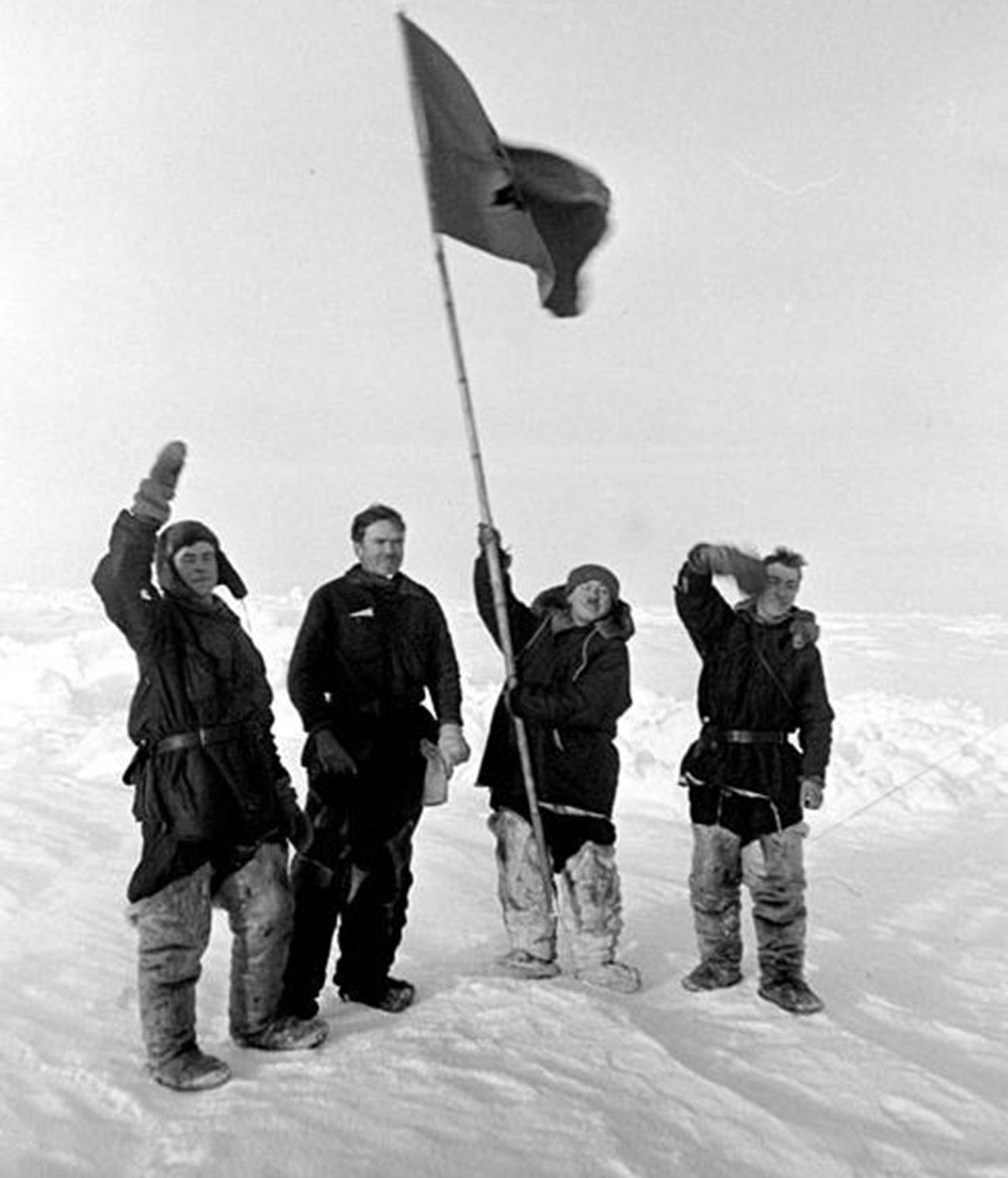 The expedition was set to depart at dawn on May 21, but a radiator in one of the engines sprung a leak. With the thermometer reading -21C, and the wind tearing the wing cover, they had to gather up the fluid and pump it back in. They finally reached the pole at 10:50am, but precisely 22 minutes later the communications link went down, and for four days no one had any idea about their fate. When at least the link was restored, the Soviet Union was astounded: the Russians were at the North Pole! It was the first human expedition to the pole that no one in the world could doubt. 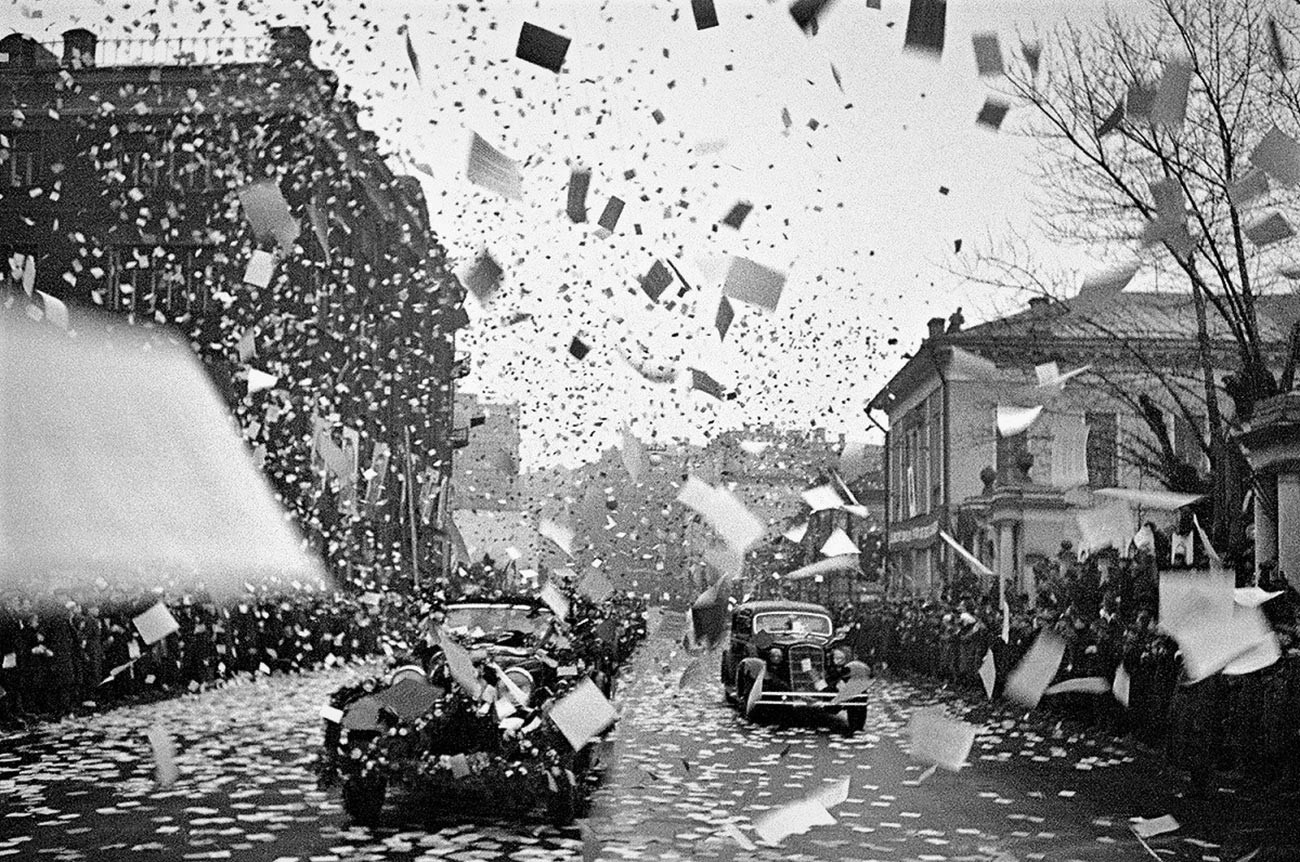 Meeting of the first successful Arctic expedition in Moscow.

Foreign media rushed to purchase documentary footage of those monumental moments, which ended up covering the costs of the expedition.

What exactly is the North Pole

The North Pole is more a geographical designation than an actual place. It consists of drifting ice floes over an ocean that reaches almost five kilometers deep.  Unlike Antarctica, there is no land mass. Planting a flag or sign marking the latitude 90° north will not work. Knowing you’ve reached the pole is only possible using a navigation system. The terrain does not allow for a permanent base, while temporary ones do not always pass over the pole or even close to it. It all depends on the drifting patterns of the ice floe hosting the research base. 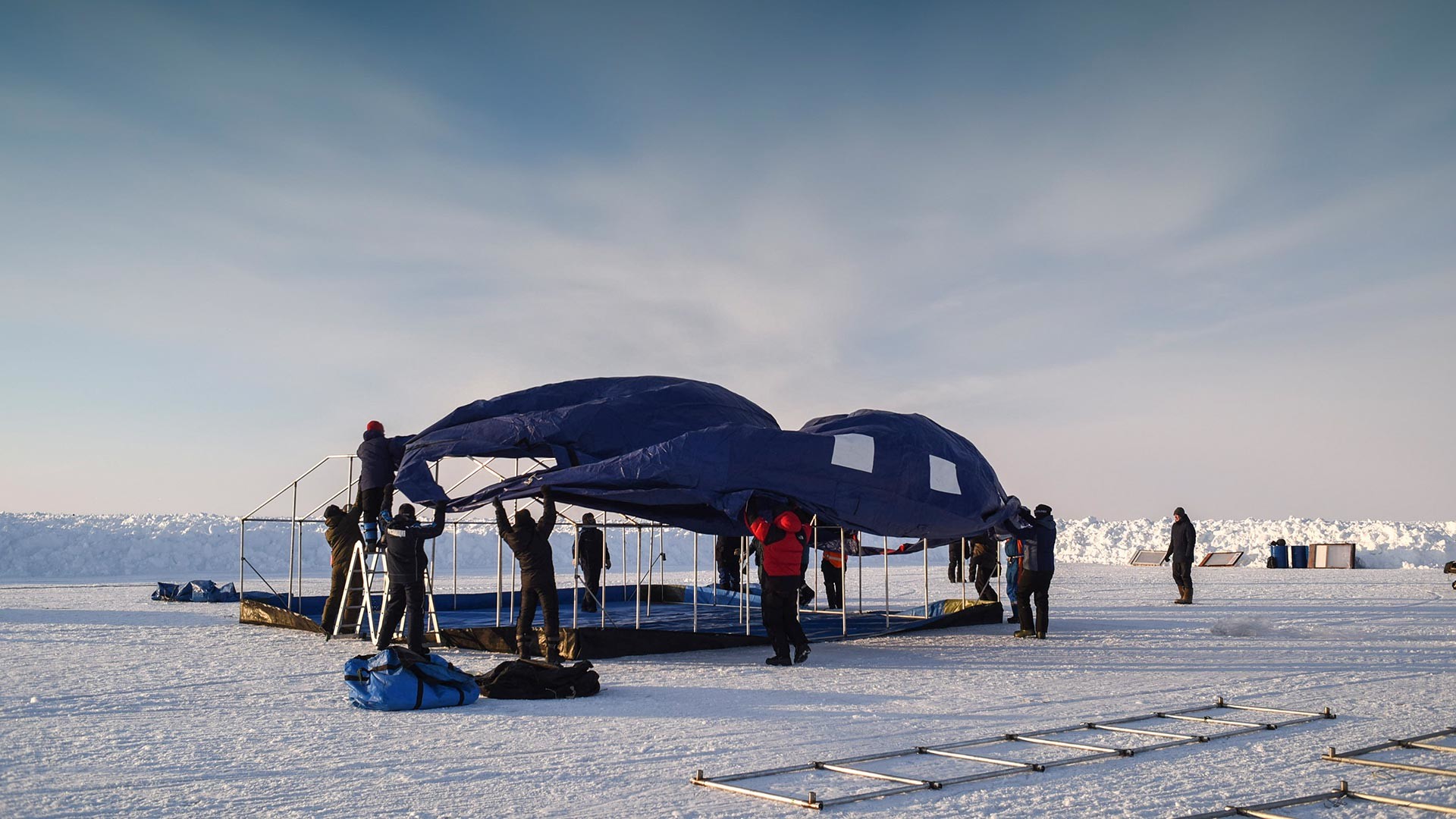 The idea of building temporary drifting stations belonged to Russian-German polar explorer Vladimir Wiese, and was implemented by the USSR, and later Russia, starting 1937. The Soviet bases operated for a couple of years until the chosen ice floe approached Greenland, where it began to break up. Since 2000, the Russians have been setting up an annual temporary base called Ice Camp Barneo, but only for a month and a half beginning in April, when the weather conditions are most favorable. When in place, the base includes an airfield with temporary living quarters, cabins, technical areas, dining room, toilet, and a signpost showing the distance to various world capitals. 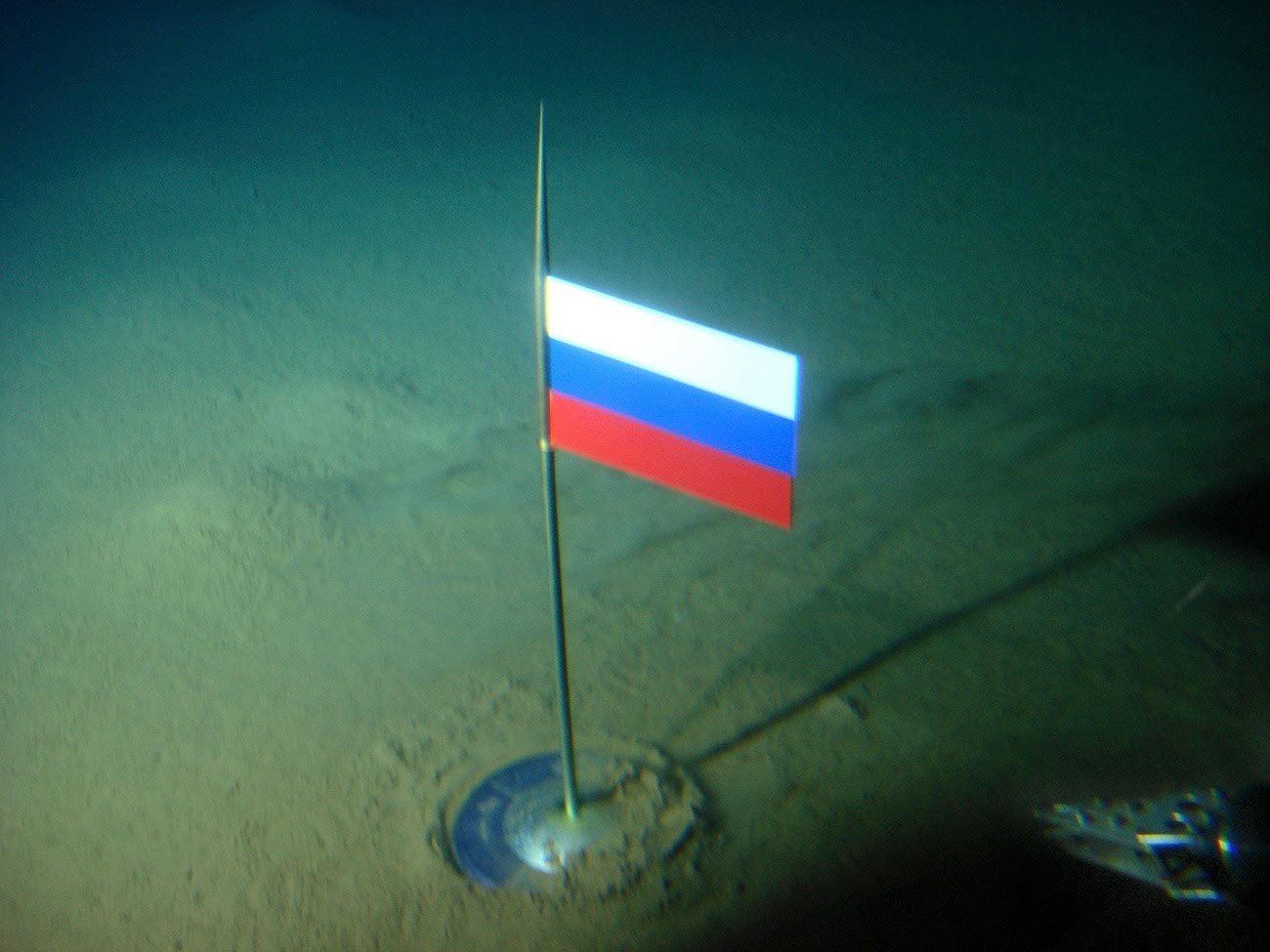 In actual fact, the Russian flag is at the North Pole, but not where you’d expect to see it. In 2007, two Mir deep-submergence vehicles reached the ocean floor under the pole, taking soil samples and planting the Russian tricolor. 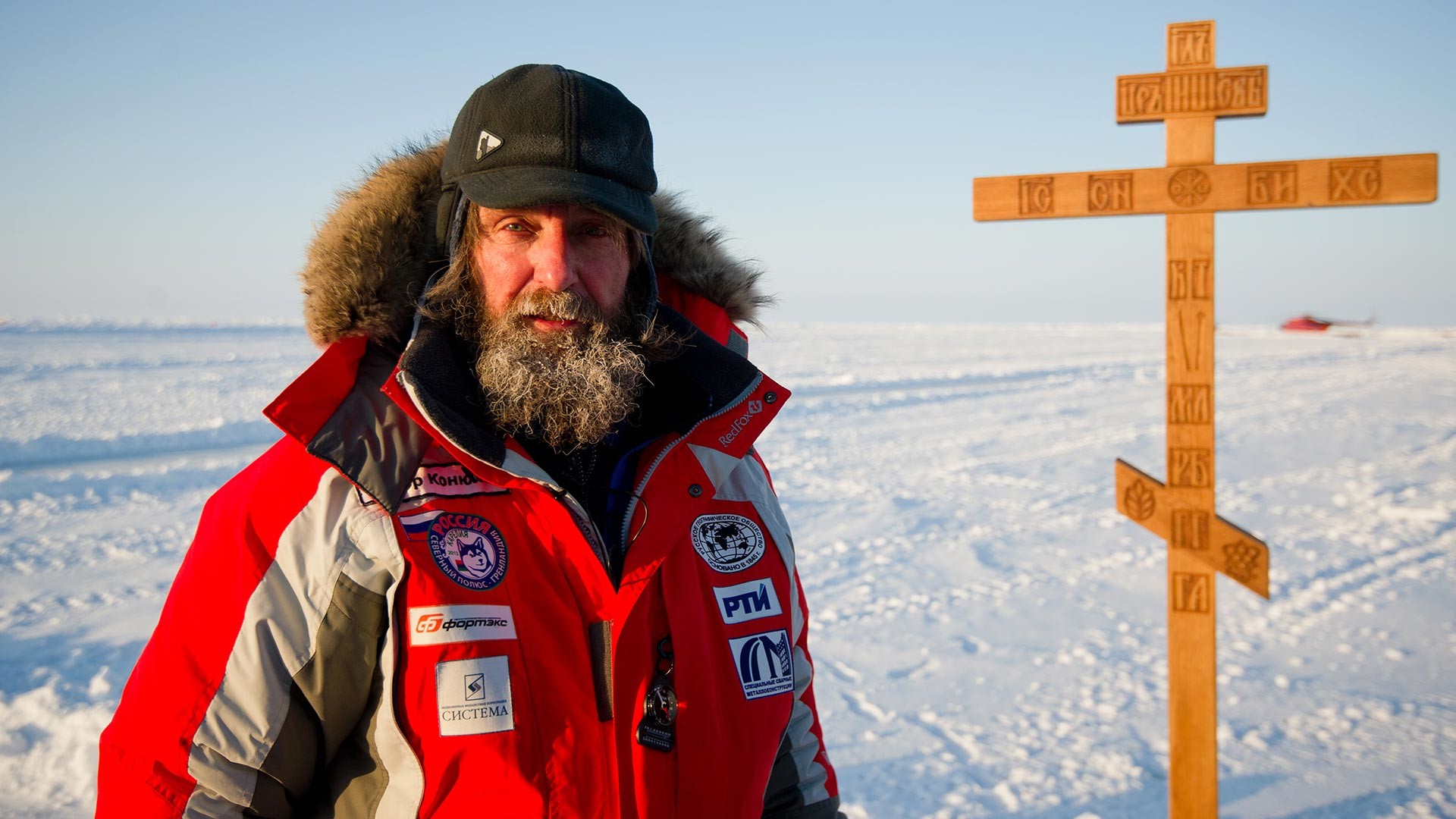 “I have never experienced such hunger,” recalled voyager and Orthodox priest Fyodor Konyukhov, who, inter alia, has survived five solo circumnavigations of the globe. These words were spoken about an Arctic expedition to the hallowed latitude in 1987, which sought to replicate the campaigns of the early 20th century: no air support and carrying all gear (provisions for 50 days, radio station, tent, etc.) by hand and sled. Because products were rationed to reduce weight, Fyodor resorted to scraping algae out of ice and eating used tea leaves and snow; all the same, one of the expedition members died of starvation. 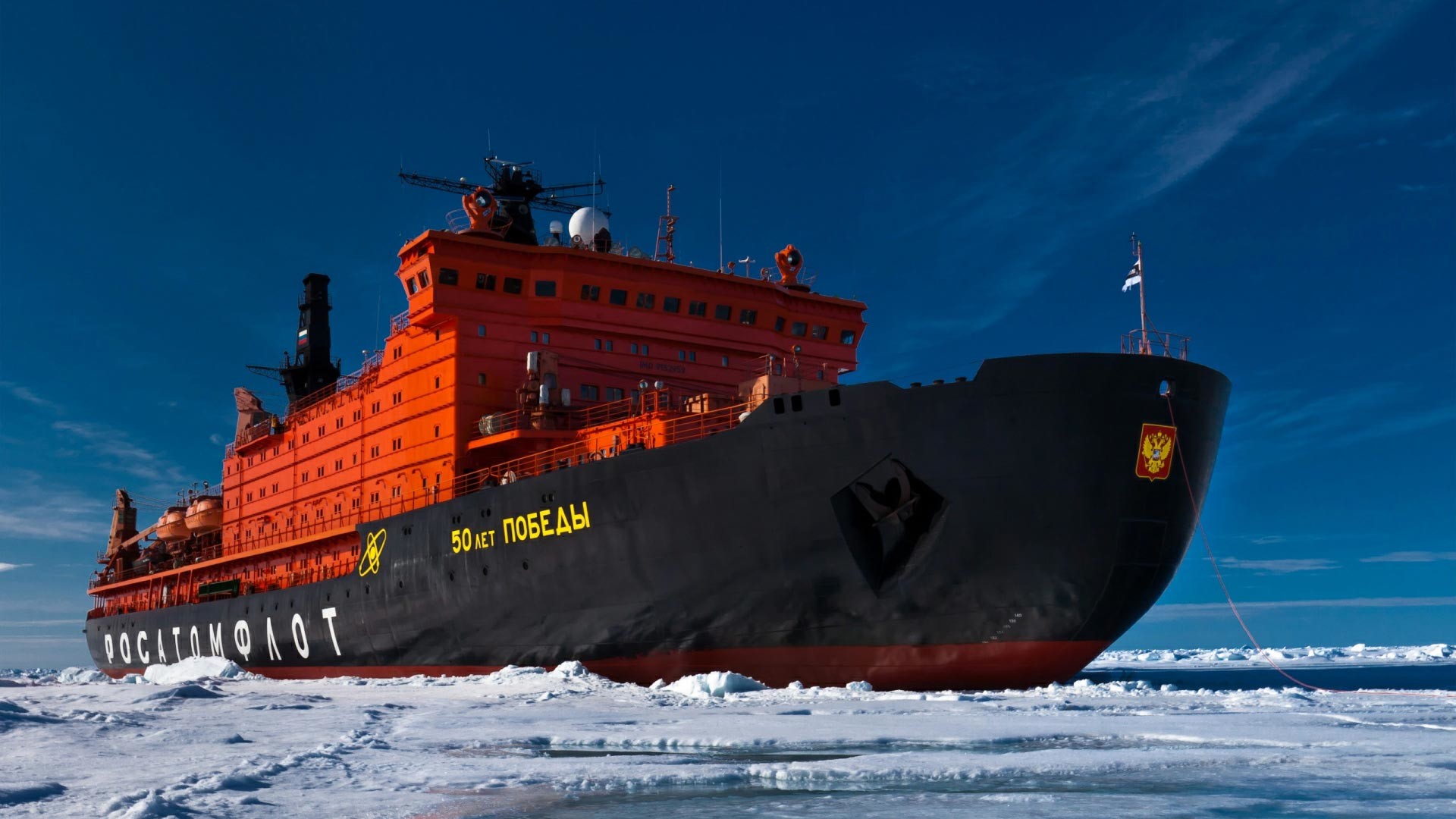 But save for extreme travelers, no one goes to the pole like that these days. It’s all become a lot easier. To go there, you don’t even need to be a scientist or explorer. It’s possible simply to buy a tour to the North Pole, starting at $21,500 per person. There are two ways to get there: aboard the world’s most powerful nuclear icebreaker 50 Years of Victory (the cruise starts in Murmansk, and has everything on board, including gym and sauna), or by helicopter. The second option involves a plane trip to Barneo, from where helicopters fly to the pole itself. Around 200-250 tourists come to Barneo every year. 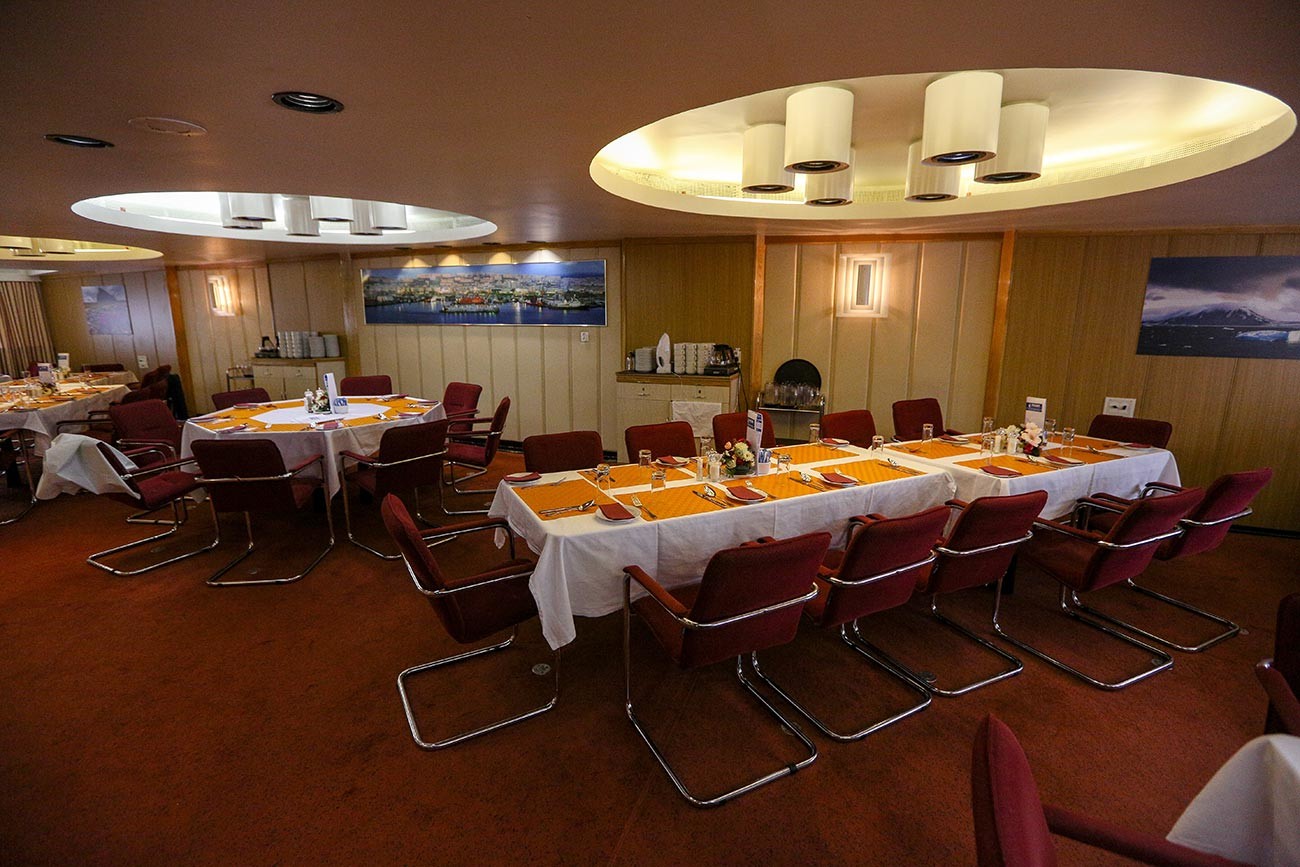 Restaurant on the nuclear icebreaker "50 Years of Victory."

The North Pole and the surrounding ocean do not belong to any state, but the territory is divided among the five Arctic countries: Russia, Norway, Canada, Denmark, and the United States. Therefore, to “enter” the pole as a tourist, you need a passport or visa from one the above countries. There are no general statistics on how often countries arrange expeditions to the region. However, in 2007, the newspaper Rossiyskaya Gazeta tried to collect some data on it. At the time of the study, it turned out that 66 icebreakers and special ice-class vessels were in residence at the pole, of which 54 were under the Soviet and Russian flags. 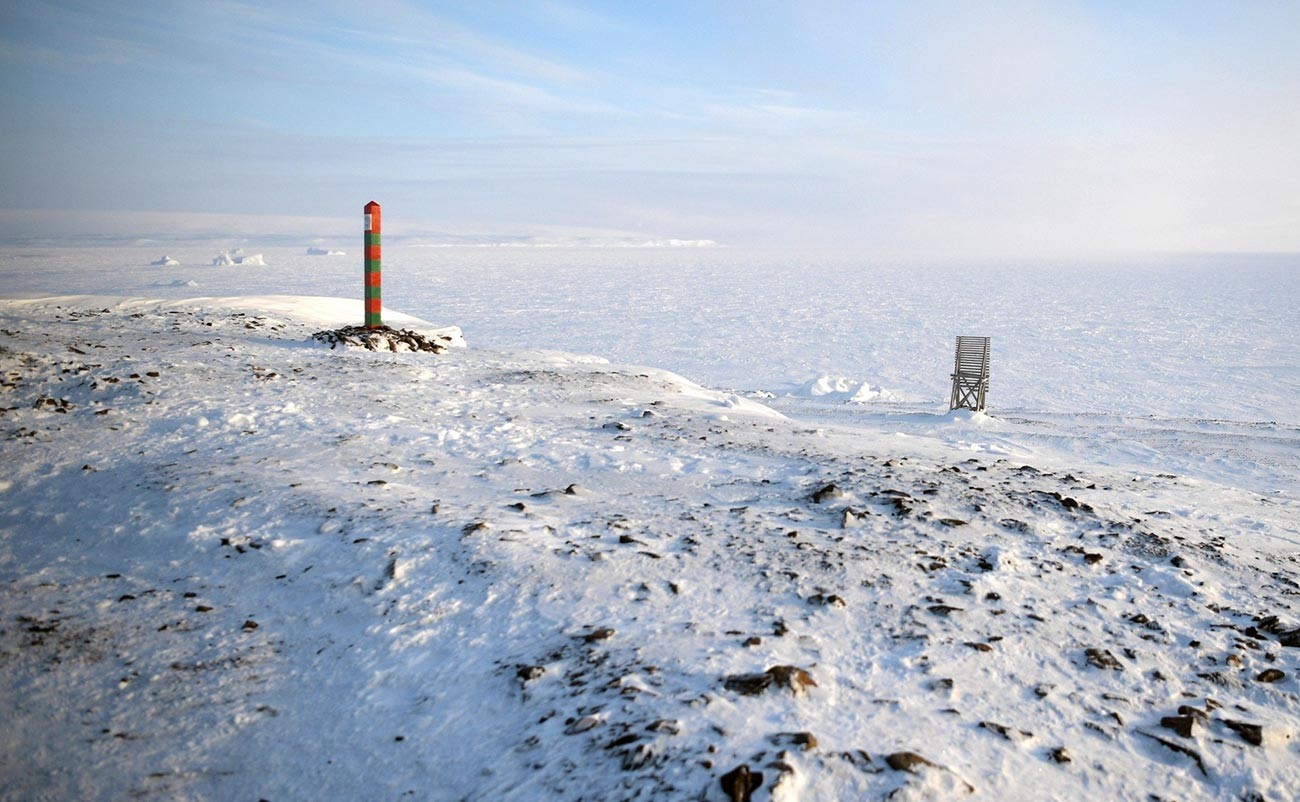