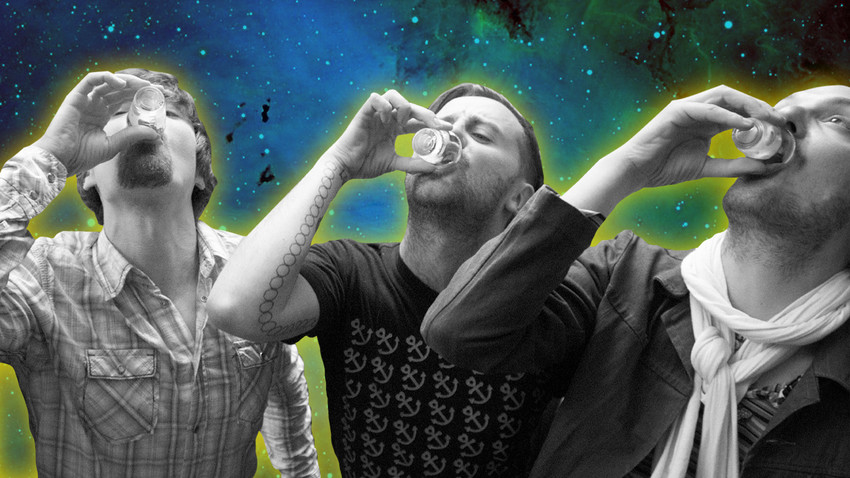 Have fun, but don't abuse alcohol!

Getty Images, Pixabay, Russia Beyond
You can try these at home, but use caution. REAL caution.

The Russian version of Spin the Bottle is as simple as it is brutal. The players form a circle and a bottle of alcohol is placed in the center. The first player spins the bottle, and whomever the neck ends up pointing at takes a shot and becomes “it”. Repeat until you’re all sitting aboard a plane, but don’t remember buying the tickets, or where it’s headed.

This game used to be played by the Russian youth of the 1980s-90s in the stairways of their panel apartment blocks, and its main goal was to get people drunk really fast.

All you need is a bottle of vodka and some stairs. There are 18 steps, divided into two nine-step stairways between each storey in a usual Soviet panel house. A vodka bottle cap is filled with vodka, the player drinks it and steps on the first step. Then, he drinks another cap and steps on the second one… Ideally, there should be 9 caps, one for each step. Whoever lasts longest wins.

The catch in this game is not the volume of alcohol, but the way it’s consumed in micro portions (one cap contains about 7 grams). This way, alcohol is absorbed through the mucous membrane of the mouth and the gullet, and by inhaling the vapors, which allows alcohol to reach the brain faster than through the digestive system.

To win this game, one should possess both strong resistance to alcohol and a strong intellect. This is regular chess, but with a quirk: for any move, you drink 25 grams of vodka. Chaser or snack is optional and can be used as a handicap: for example, the stronger player doesn’t use chasers, and the weaker one does.

The same rules apply with checkers, with a slight difference: 25 grams not for each move, but for each capture – this way, the alcohol consumed during each game can’t exceed a maximum of 300 grams.

The game goes under different names, including Russian Roulette, and it’s even more brutal than Stairs or Alco Chess in terms of its effects on the body.

You need three shot glasses, two of them filled with two kinds of strong spirits of the same color (e.g. vodka and white grappa), and the third one with water. (If you don’t have two same-colored spirits, you can just use vodka and vodka). It’s important that the amount of liquids is the same and they are all of the same temperature (glasses with cold liquids will fog up on the outside).

The operator shuffles the shots, and the player then must choose which one of the shots he drinks and which one he chases it with, immediately. The player must not examine or smell the shots. The goal of the game is to be the last man standing (sitting, lying… just have a pulse). Which is very hard, when you chase water with vodka – or, even worse, vodka with gin.

This is a game for a large company, and probably a heavy-drinking one – picture students of some Soviet technical university, or geological field team on a six-month hike.

“The bear” comes again and again, until there is only the last drinker crawling out from under the table; he’s the winner who takes all the money! And will probably have to spend a good chunk of it on hangover remedies the day after.

Reminder:Drink responsibly. Excessive drinking can lead to severe health damage and even death.

During the coronavirus epidemic, use individual glasses for drinking. Alcohol is NOT an antidote for the virus.