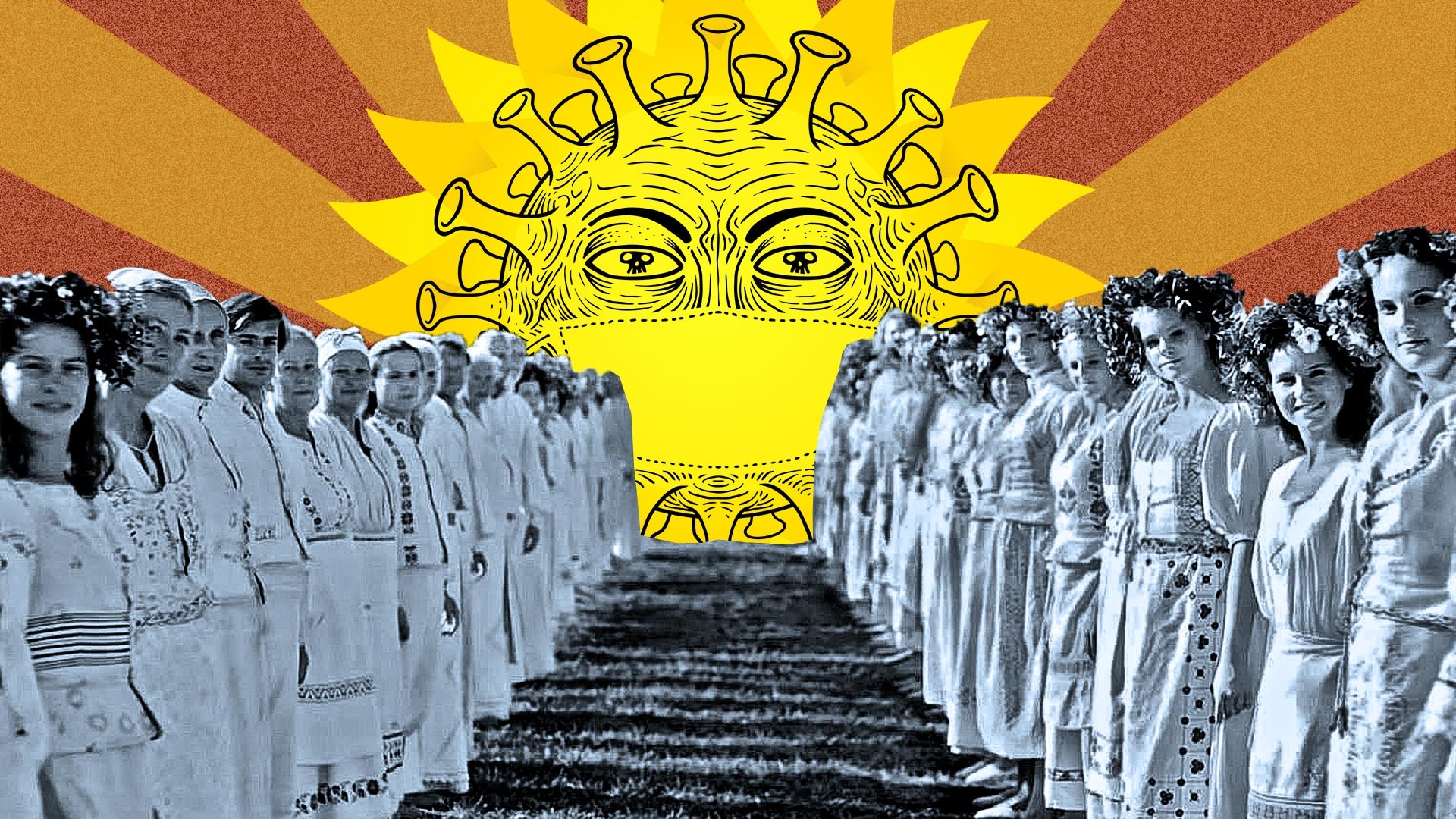 Ari Aster/A 24; Pixabay
Russia is home to more than 180 ethnic groups, many of which have their own customs and traditions rooted in the distant past. For some, adherence to these traditions is more important than the spread of coronavirus.

In one hand, a shaman dressed in fur clothes and elaborate reindeer-horned headgear holds a gong trimmed with painted fabric and fur. In the other, he clasps a stick with a fang-shaped object at the tip.

“Where the forces roam, the circle spins round, where troubles and mountains take us far from native Earth, from native homes, now and forevermore,” says the shaman enigmatically, beating the gong with the stick.

Surrounding the shaman in the small room draped with furs and fabrics are 20 or so other people. They stand close together and observe the proceedings with an earnest expression on their faces; some even film it on their phones. No one is wearing a mask or gloves. 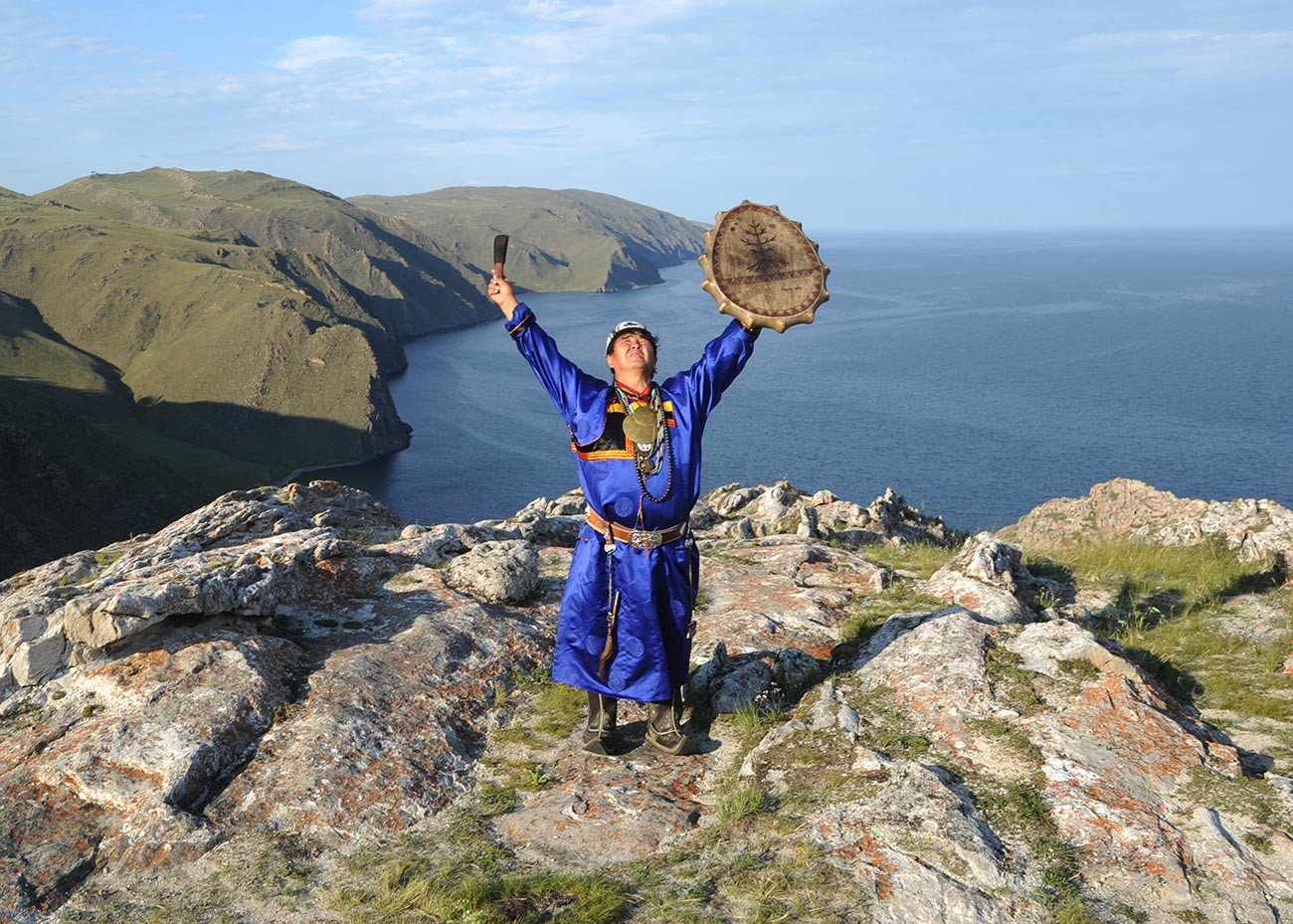 That is how shamans in the Altai Territory marked the arrival of the spring equinox on March 22. Such rituals are performed annually, but this year’s is slightly different from past ones — locals asked the chief shaman to protect the region from СOVID-19.

According to news agency TASS, similar rituals with dances and tambourines took place in other Russian regions, including Buryatia and Tuva.

“Every week we hold ceremonies to honor our patrons and deities. So that the karmic foundation of our body is protected from all kinds of adversities, including coronavirus,” explains Buryat shaman Bair Tsyrendorzhiev.

Unfortunately, it was not possible to completely shield the regions from the outbreak. As of May 10, Altai had reported 669 patients with coronavirus, Tuva 81, and Buryatia 570.

“It’s in other regions that funeral wakes are held in a cafe or at home, whereas we put up tents and lay tables for guests in the street. It’s not possible to accommodate everyone in the home,” says Georgy, a resident of Vladikavkaz, the capital of North Ossetia. Ossetians make up almost 65% of the people of this North Caucasian republic, according to the 2010 census.

Georgy says that funerals and weddings in North Ossetia are still grand occasions even during the lockdown. As per tradition, everyone is invited, even if they barely know the bride or groom.

“About three weeks ago when all the cafes and hairdressers were closed, I was at a funeral. Distant relatives and fellow villagers were there. I’d say 500-600 people in total. Of these, 5-6 were in masks. It’s not the done thing here. A real man doesn’t wear a mask,” explains Georgy. 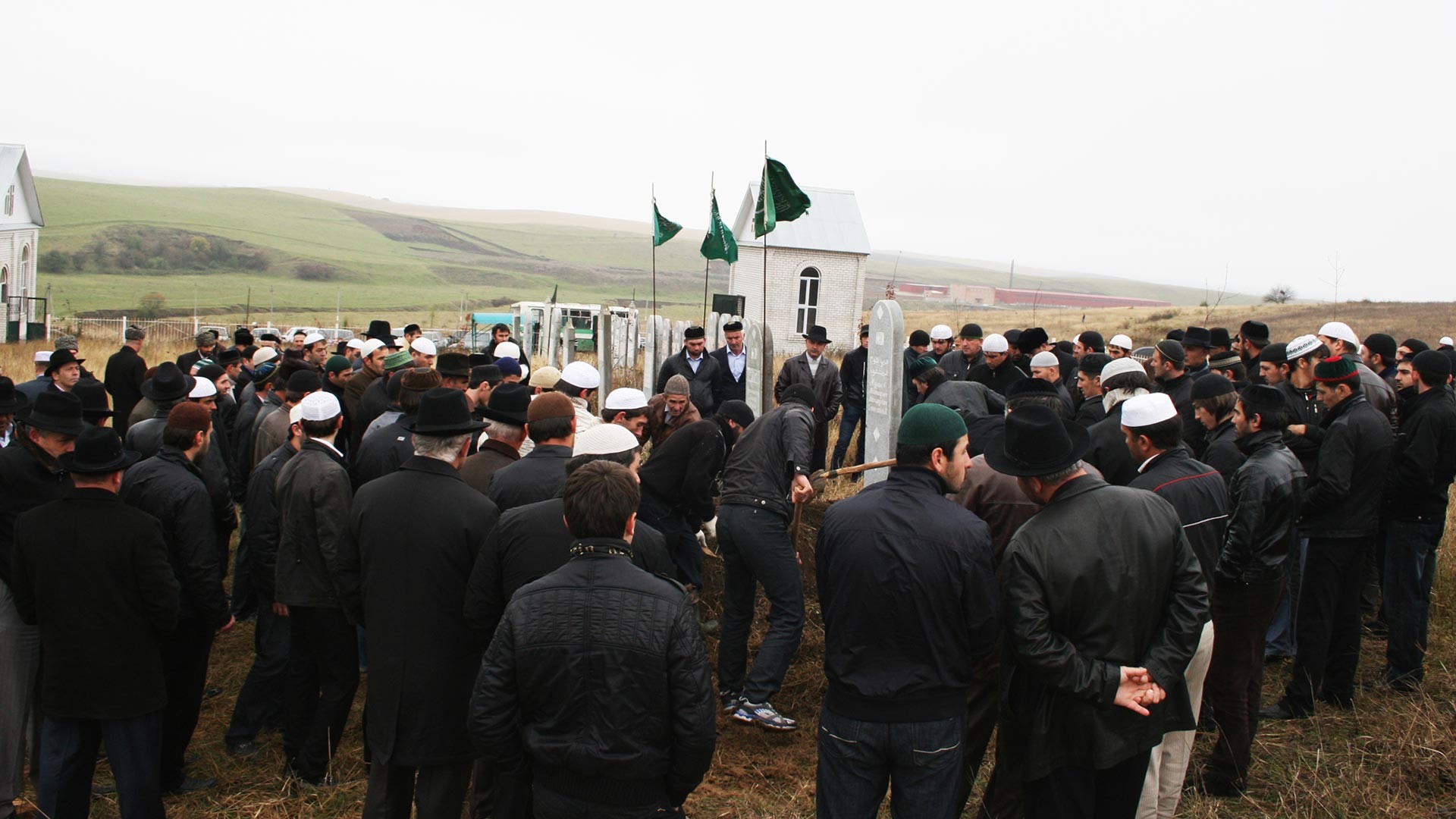 Not everyone was able to squeeze into the small private courtyard, so all the tents and tables were carried out right into the middle of the road.

“The street was blocked during the funeral. Everyone understands the need to express condolences and best wishes to the bereaved so that no more trouble afflicts the home before time. No one complains,” he says.

Funerals in the neighboring republic of Ingushetia are similar. Recently, several hundred people gathered for the funeral of the local imam and his sons. As of May 10, Ingushetia had more than 1,000 infections, and Vladikavkaz around 1,500.

A video shot by a resident of Nizhny Novgorod shows a short woman dressed all in black holding a bouquet of flowers with trembling hands, glancing over her shoulder. Timidly, she approaches a high blue fence. Bending down slightly, she makes a dart for a gap between the fence and the ground, and carries on running. Behind the fence is a cemetery, and that day the woman simply has to be there. Pandemic or no pandemic.

Radonitsa is a special day in the Russian Orthodox calendar, which falls two weeks after Easter. On this day, it is customary to visit the grave of deceased relatives. At the cemetery, people lay flowers and pray for the departed. In 2020, Radonitsa fell on April 28 — the very same day when most Russian regions went into lockdown. 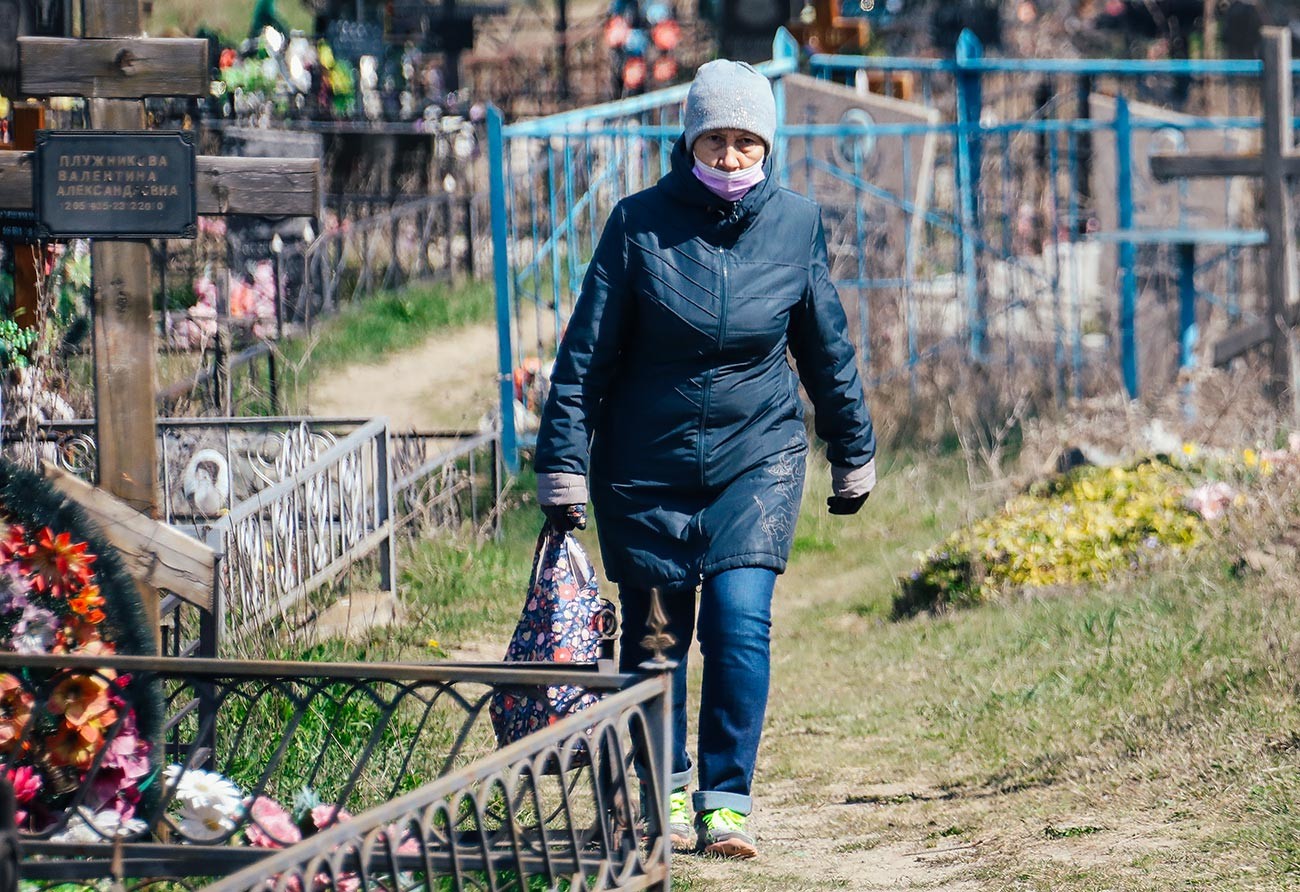 Due to the spread of coronavirus, most cemeteries in the regions were closed to everyone except employees and those attending funerals. But the ban had no effect on people desperate to pay their respects to loved ones. Holes in fences aren’t that hard to find.

Offenders were spotted in Khabarovsk, St Petersburg, Nizhny Novgorod, and elsewhere. However, they do not consider themselves violators, believing the ban on visiting loved ones to be insulting and immoral.

“This is a day of remembrance, with decades of tradition attached to it, it can’t be broken. Moreover, self-isolation is a voluntary act, and no one has the right to forbid you from visiting relatives. It’s house arrest,” says Tatiana Yudina, a resident of Chelyabinsk, who visited a cemetery on Radonitsa. 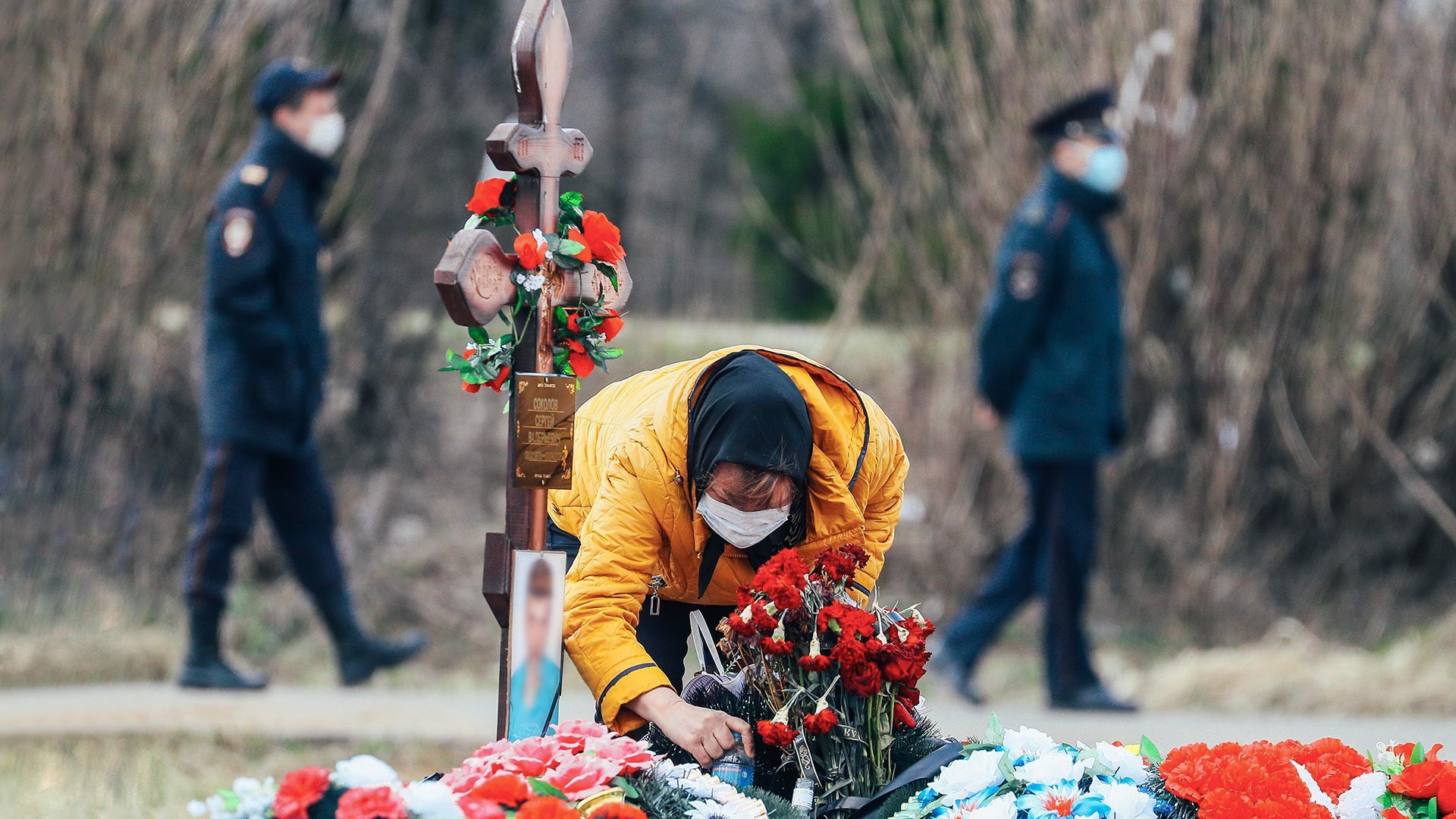 Vladimir, another local resident, describes the ban as “beyond logic.”

“Graves are the proper ‘social distance’ apart. I don’t think there are ever crowds of people around them. On public transport and in stores, the danger of infection is far higher. Are people supposed to stay put and feed on the holy spirit at home?” he opines.

As of May 10, there were 1,041 infections in the Chelyabinsk region.

The rite of spring

On April 26, two women at their home in a woodland area near Nizhny Novgorod heard a noise and strange cries.

They went outside to investigate. Going deep into the forest, they came across the following scene: about a hundred men and women without masks round-dancing and shouting out inarticulate phrases.

The video they shot quickly spread across social networks, and even found its way onto national TV. The two organizers of the event were prosecuted for violating the lockdown, and face a fine of 1,000–30,000 rubles ($13–$400). 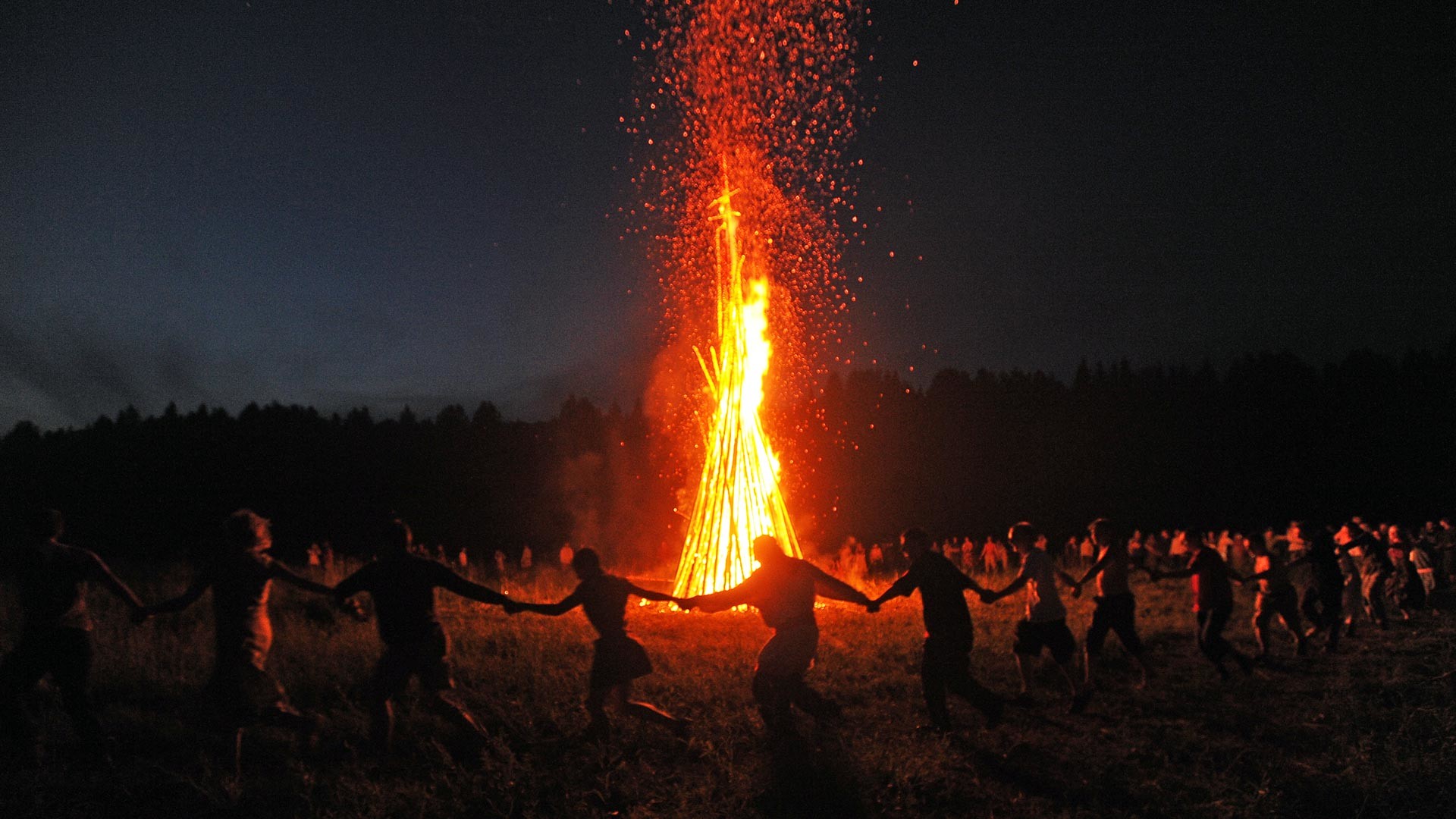 One of the round-dance participants, Oleg (not his real name), explained that the group had met to celebrate Krasnaya Gorka — a pagan festival of early spring from the time of ancient Rus.

“We performed a ritual to reunite the people of the land of Nizhny Novgorod with their ancestors and the forces of nature, and to awaken people’s dulled senses to save our Rus and the whole Earth from profanation and enslavement by digitalization,” he explains.

Everyone had the necessary protective equipment, adds Oleg.

“We had a lot of water with us in case of fire. And of course the mood was upbeat with songs, dances, games, competitions, walking on hot coals, swimming, and tasty food. What more do you need? Coronavirus will go away by itself,” he is sure.