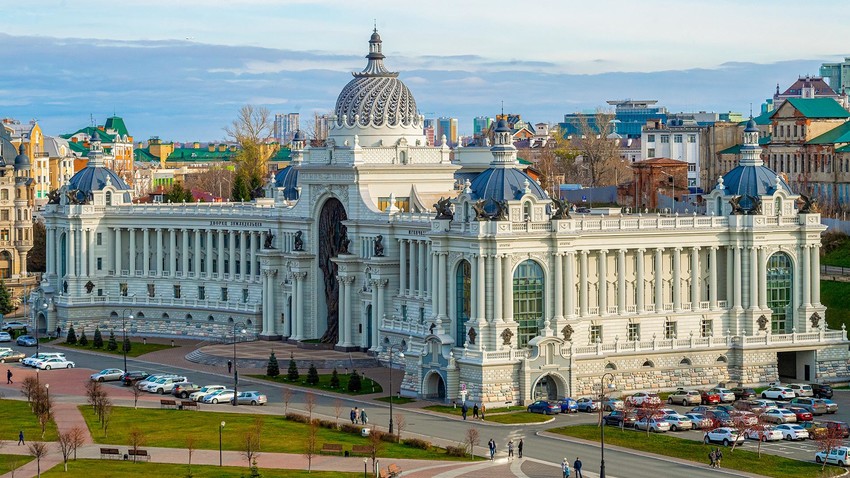 The Palace of Farmers

Komsomolskaya Pravda/Global Look Press
Kazan is the capital of the Republic of Tatarstan and one of the most beautiful cities in the whole of Russia, where Orthodox Christianity and Muslim culture intertwine. Check out its main architectural attractions. 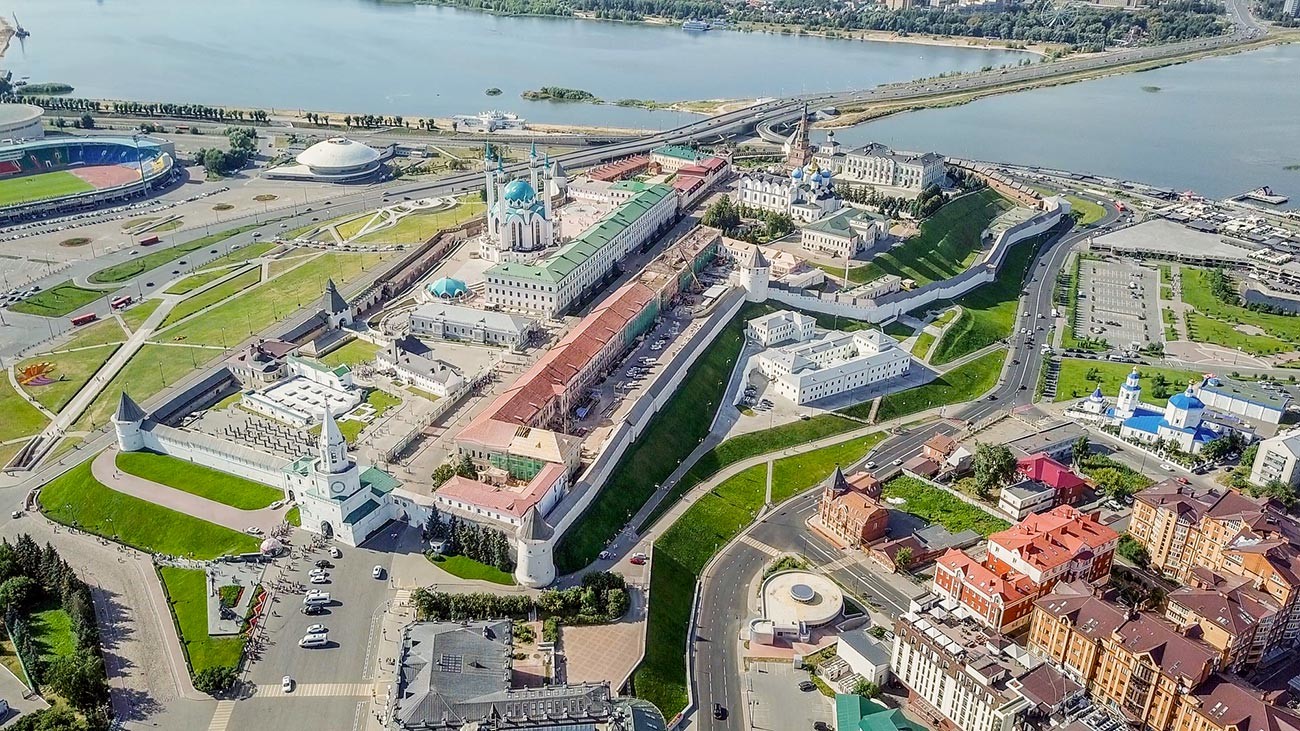 When Ivan the Terrible conquered the Khanate of Kazan in 1552, he summoned two architects who had built St. Basil’s Cathedral on the Red Square in Moscow and ordered them to build a citadel on the ruins of the former, more ancient, castle of Kazan Khans.

Today, the magnificent Kazan Kremlin is one of the main attractions in the city. Overlooking the Volga and Kazanka rivers, it is home to the official residence of the president of Tatarstan.

This historical landmark was declared a World Heritage Site in 2000. 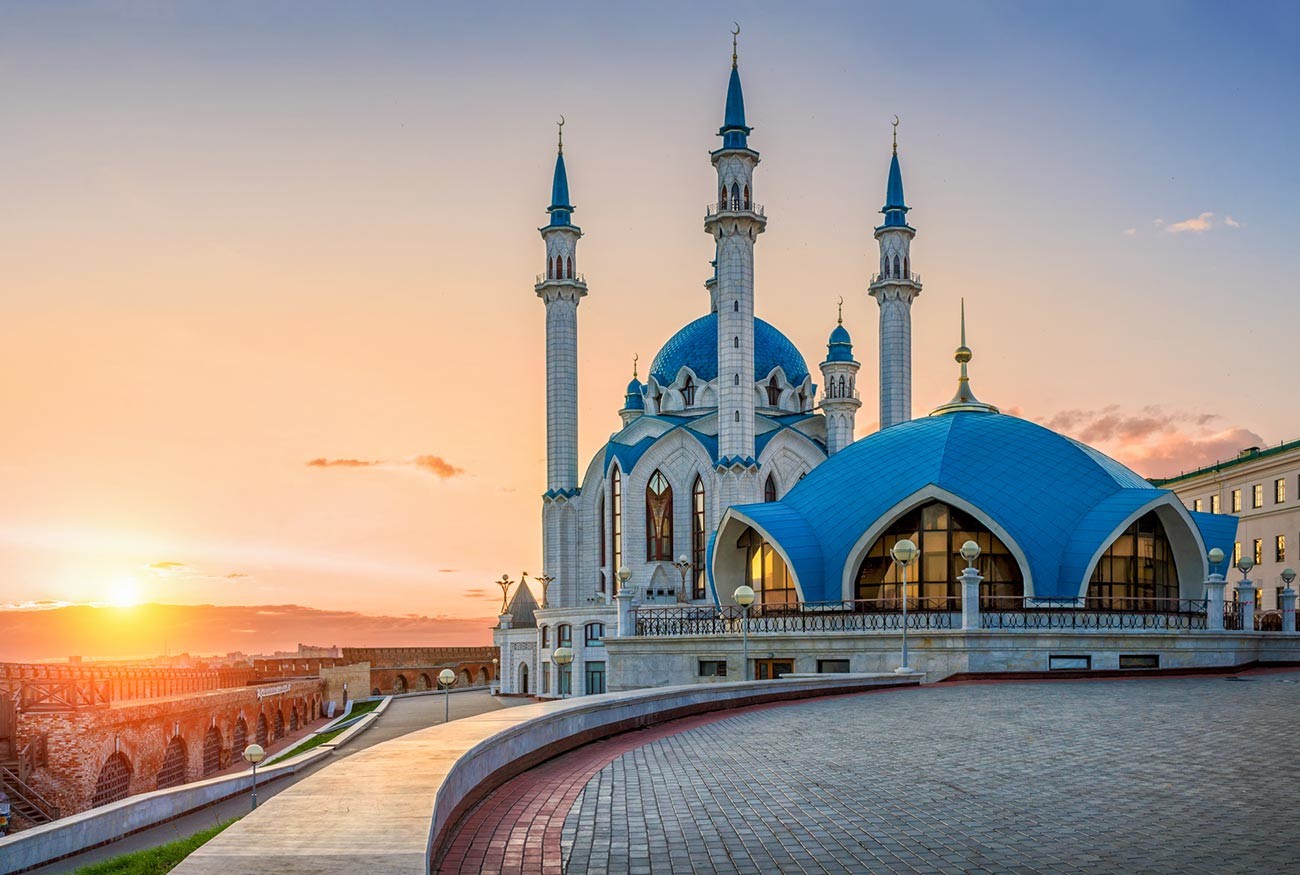 This iconic mosque was destroyed during the siege of Kazan and was not rebuilt up until 2005, when it became Russia’s biggest mosque at the time (before it was surpassed in size by ‘The Heart of Chechnya’ Mosque, also known as the Akhmad Kadyrov Mosque, in Grozny, Chechnya in 2008).

Although it is located on the territory of the Kazan Kremlin, it should be regarded as a separate site because of its unique, striking appearance.

3. Cathedral of the Annunciation 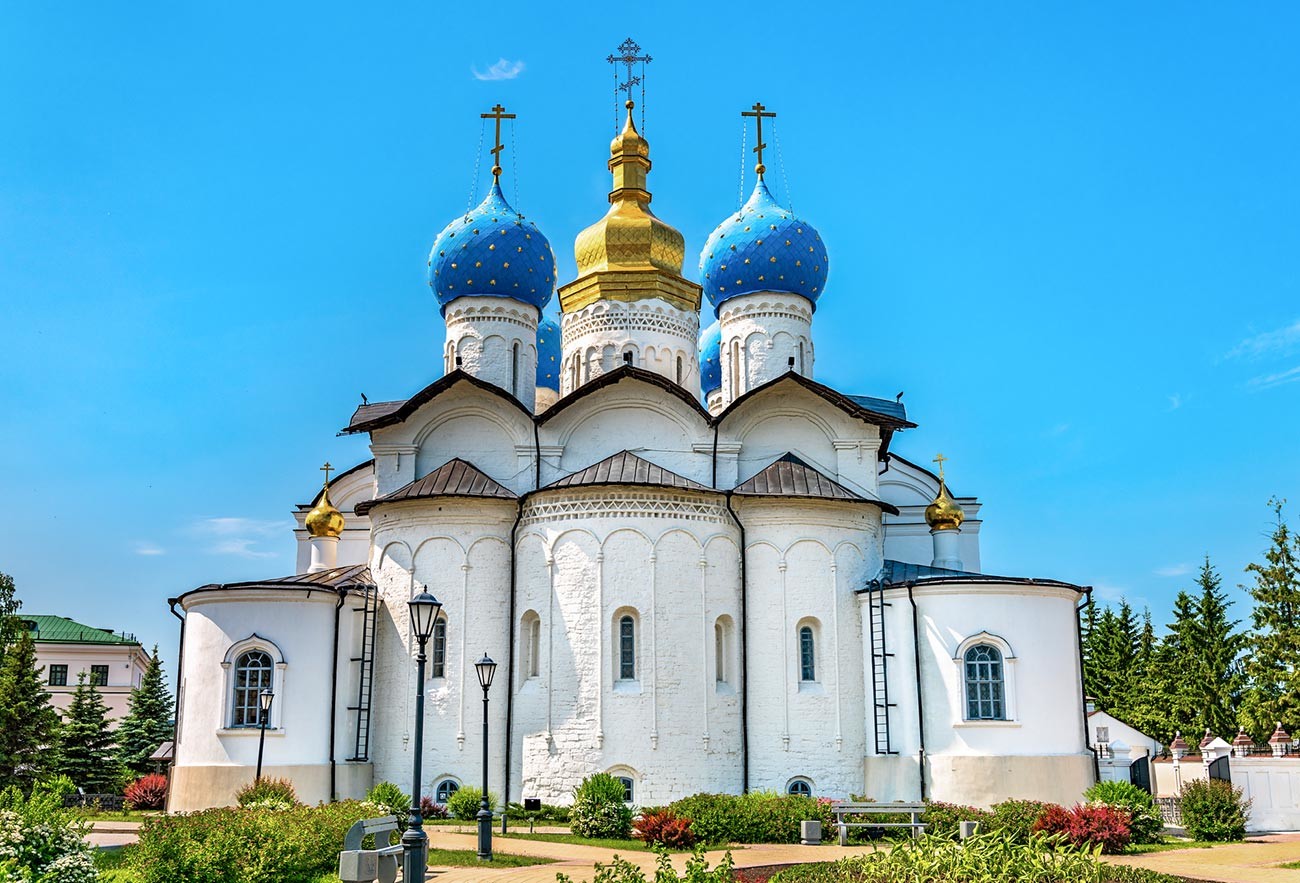 This is another ‘child’ of Ivan the Terrible’s victory over Khanate of Kazan. After his army conquered the city, the first Tsar began construction of the Kremlin. Naturally, he needed a cathedral to serve as a citadel of Christianity in the newly conquered region.

The builders of the St. Basil’s Cathedral in Moscow also helped to build the Cathedral of Annunciation that became a center of Christianity in the immediate region, but also much further in Siberia.

Today, the cathedral is one of the main cultural attractions in the city. Curiously, its colors rhyme with the colors of the Kul Sharif Mosque within the Kazan Kremlin. 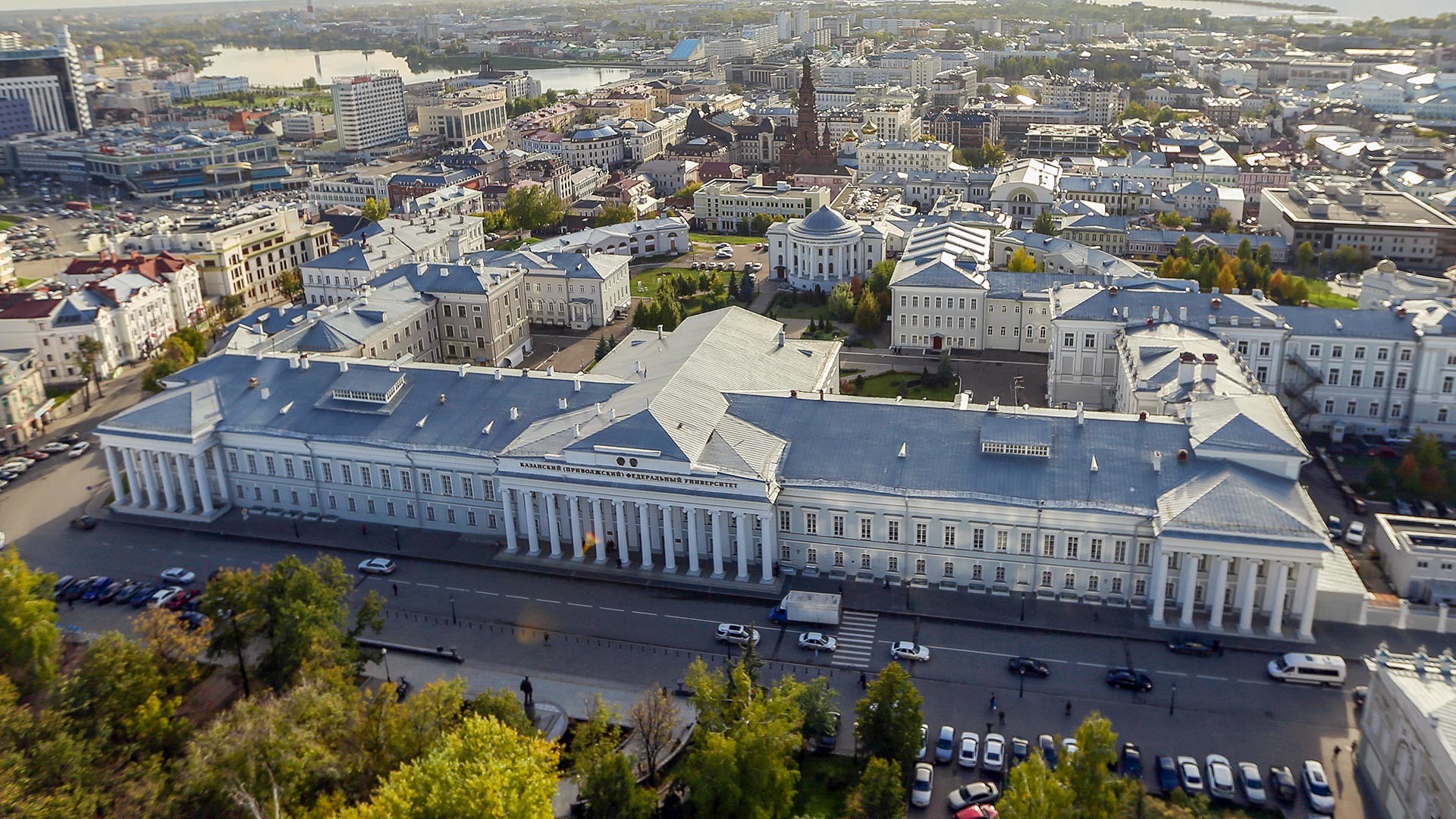 This is one of Russia’s oldest universities and was founded in 1804, when Emperor Alexander I signed a corresponding decree. Since then, the university has expanded to other buildings that it acquired or built, the latest one constructed in 2003.

Yet, the main architectural pearl of the site is, arguably, the main building of the university, designed by architect Petr Pyatnitsky and built in the 1820s.

The university was home to many scholars famous for their groundbreaking research in disciplines like geometry, mathematics, chemistry and physics. Yet, its most well-known alumni was Vladimir Lenin, who studied there in 1887, before he was expelled later this same year for participating in protests against the Tsarist government. 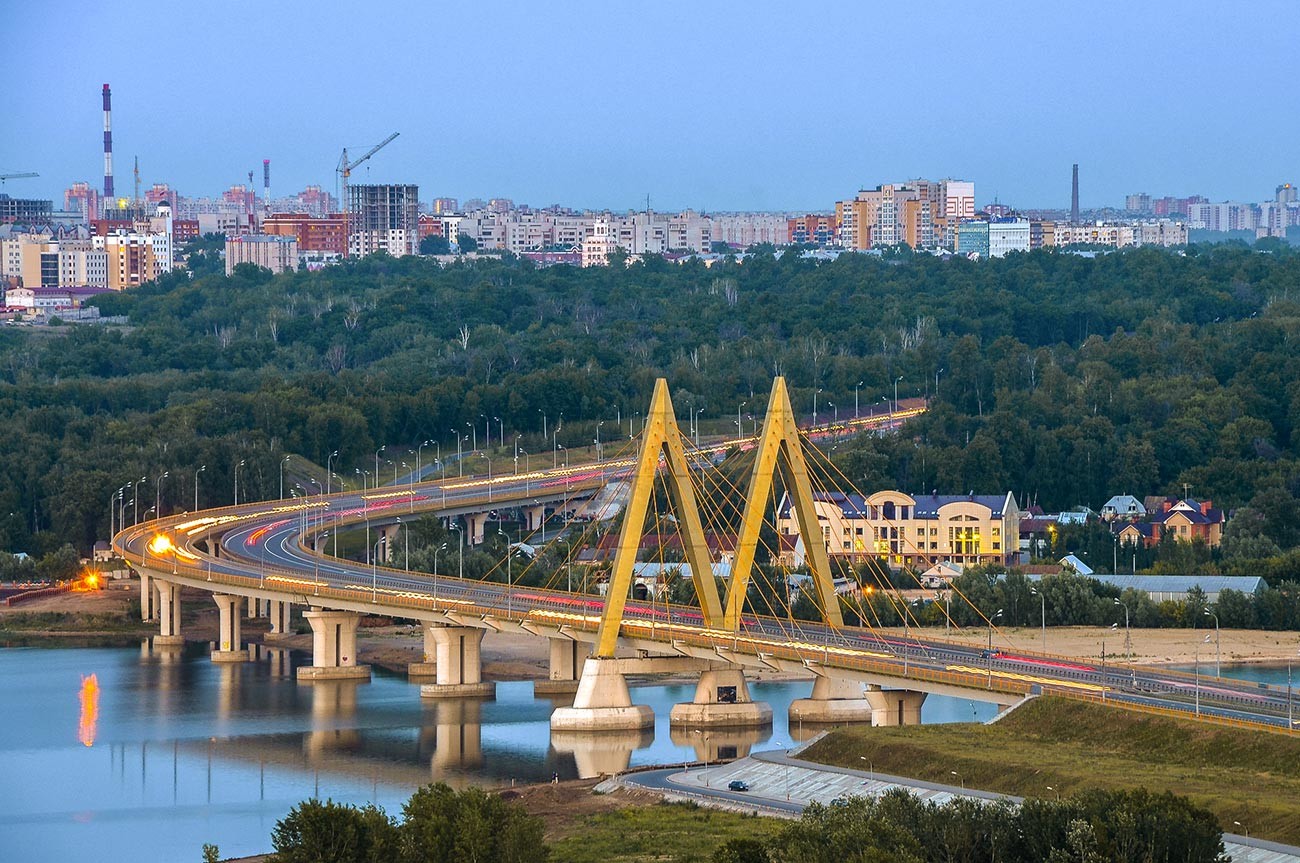 This unusual bridge was built in 2005 to commemorate Kazan’s 1,000th anniversary. The bridge was given the name ‘Millennium’ to mark the milestone age of this ancient city.

After completion, the Millennium Bridge became the biggest in Kazan. In the middle of it stands a giant letter “M” — which stands for “Millennium” — and is 45 meters tall and 64 meters wide. It looks impressive from any viewpoint.

6. The Palace of Farmers 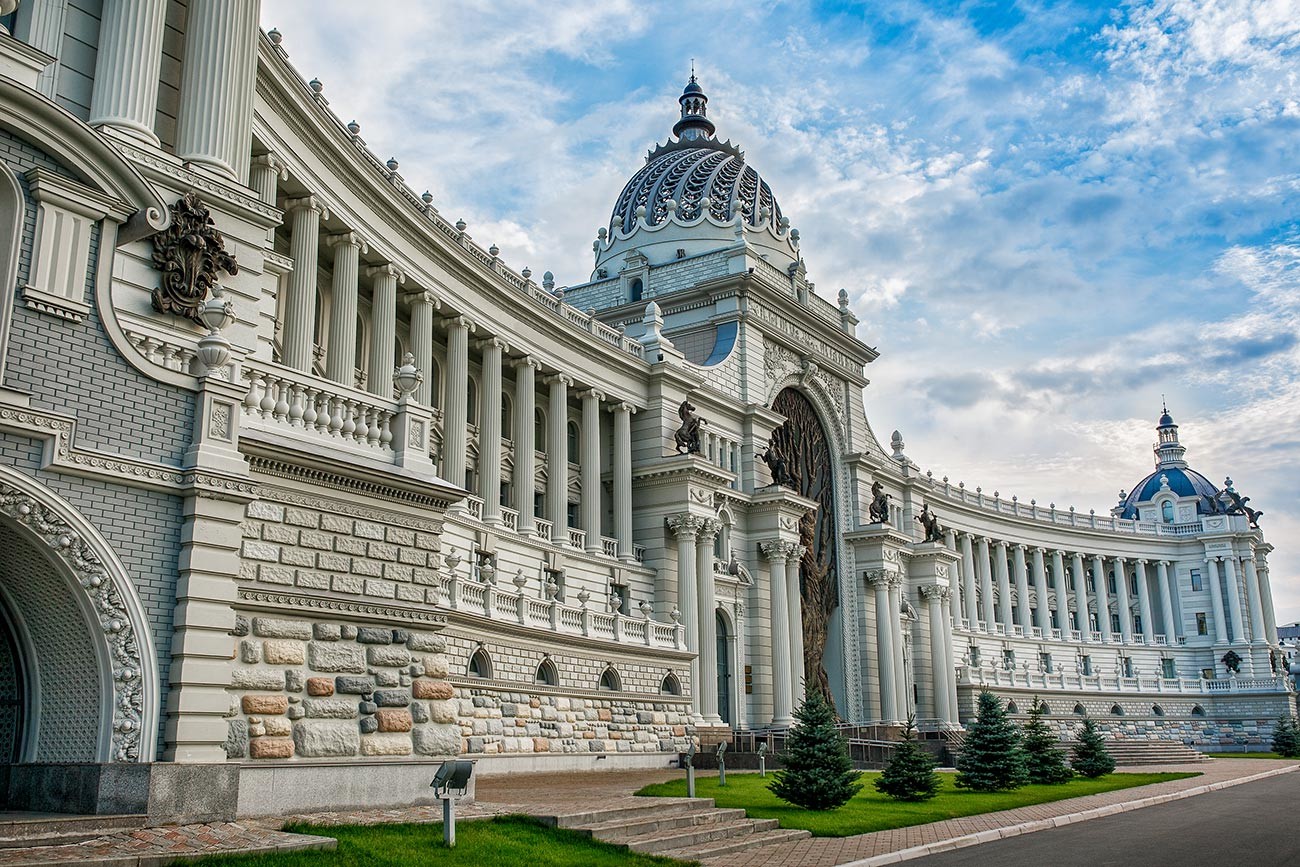 Although this building is comparatively new — it was only built in 2010 — it has quickly become one of the most iconic buildings in a city full of ancient sites and where architectural competition is fierce. Combining Classical and Empire architectural styles, the recently built palace somewhat resembles the Petit Palais in Paris.

Despite its rich exterior, the interior of the building is rather modest and serves as the headquarters of the Ministry of Agriculture of Tatarstan.

7. Temple of All Religions 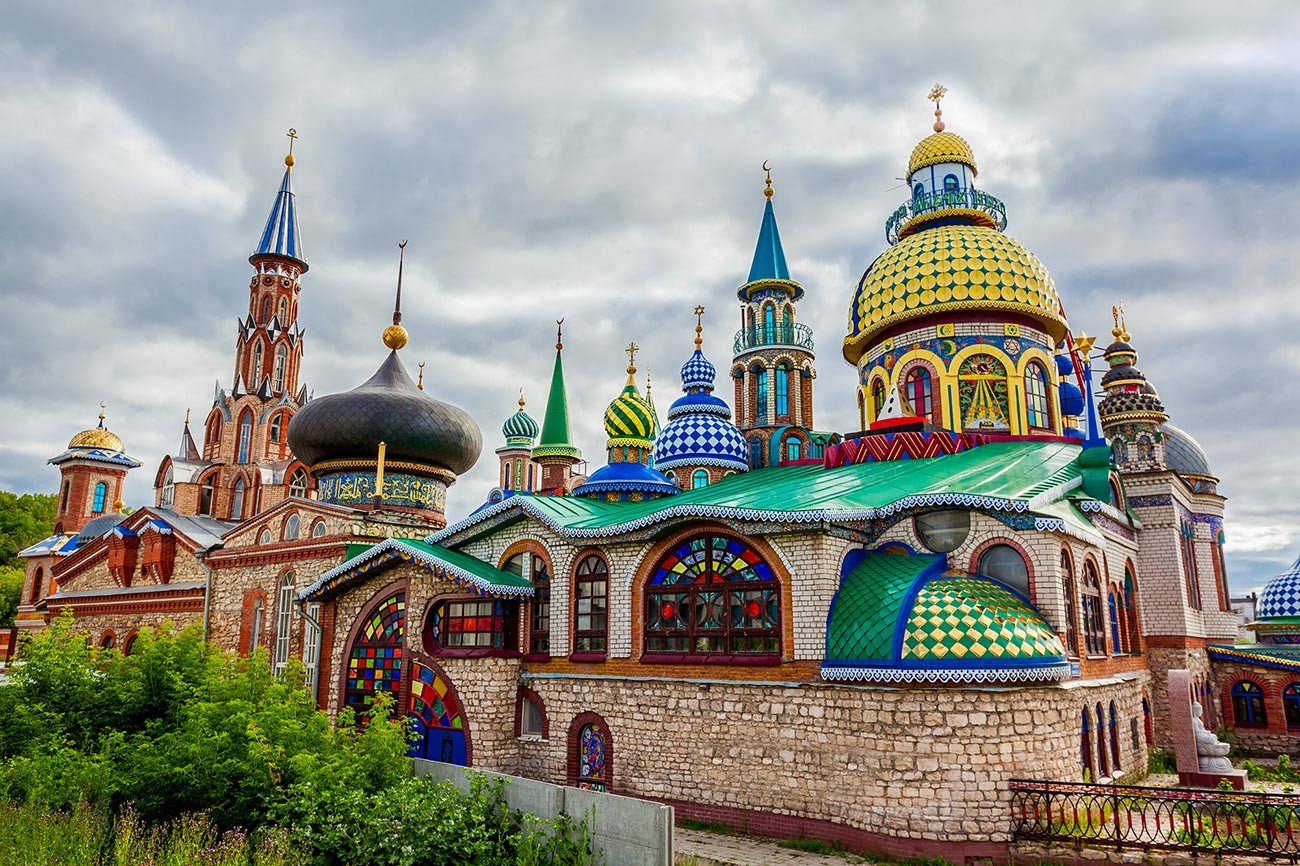 This is arguably the most unusual site on our list of most beautiful buildings in Kazan. The Temple of All Religions, despite what the name suggests, is not a religious building, but a residential house built by a local artist Ildar Khanov. It is located off the city center and by the Volga River.

The building’s design, which gives birth to its peculiar name, looks like a collection of several types of religious architecture, including an Orthodox church, a mosque and a synagogue. Despite its residential status, the site attracts visitors and hosts lectures, as well as other socio-educational events. 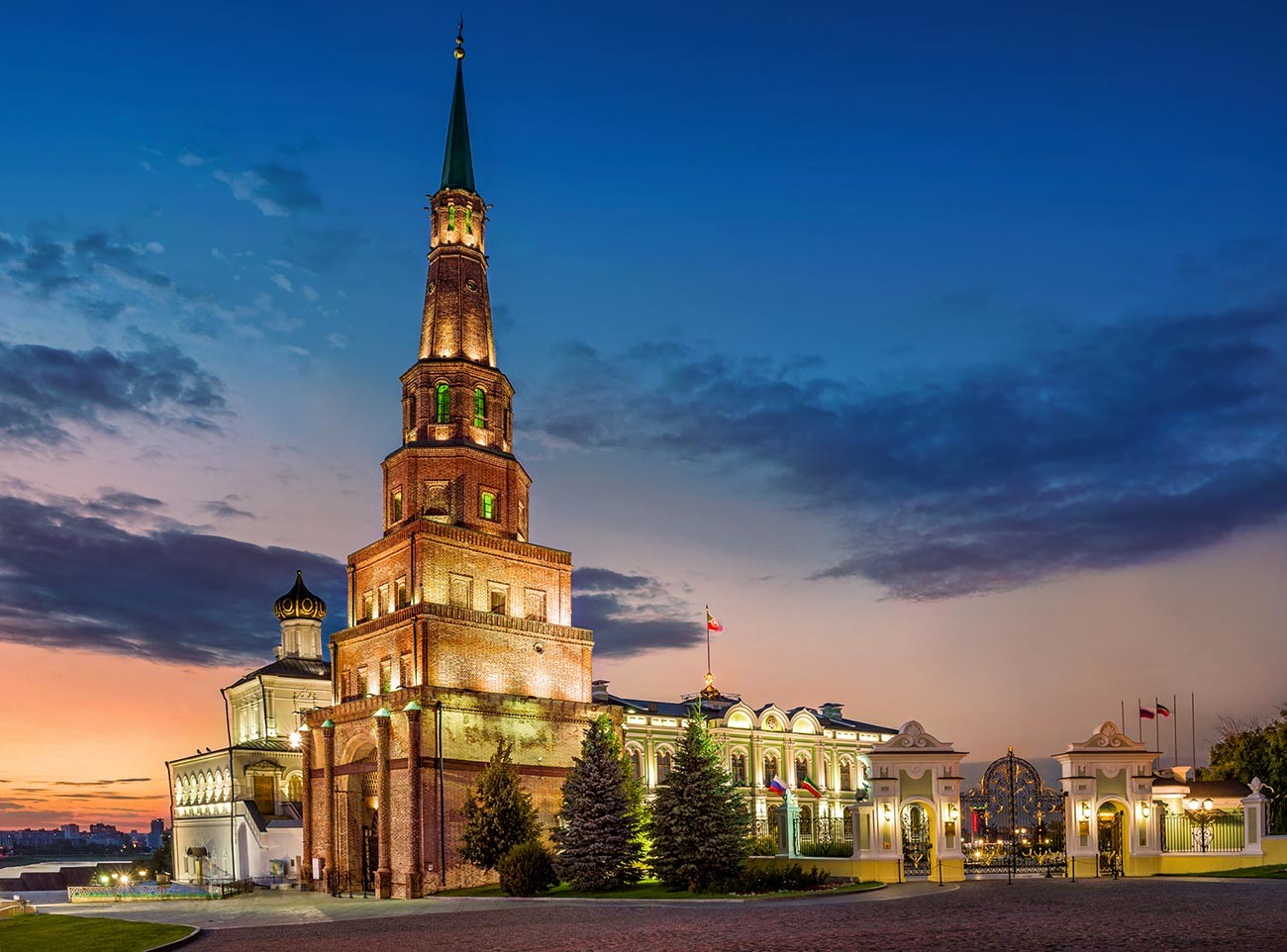 The Suyumbike Tower is one of the most recognizable architectural landmarks in Kazan. It is one of the Kremlin’s towers, but what makes it so distinguishable is that it is also a leaning tower, akin to the famous Leaning Tower of Pisa. So far, the inclination is estimated to be 1.98 meters.

Historians do not have a single opinion on when exactly the tower was built and some believe it’s as ancient as the Khanate of Kazan (a medieval Tatar Turkic state that occupied the territory of former Volga Bulgaria between 1438 and 1552), yet others date it to the turn of the 18th century. The local legend has it that the regent of the Kazan Khanate, Suyumbike, jumped off the tower, erected in her honor, to protest advances of Ivan the Terrible.

9. National Museum of the Republic Tatarstan 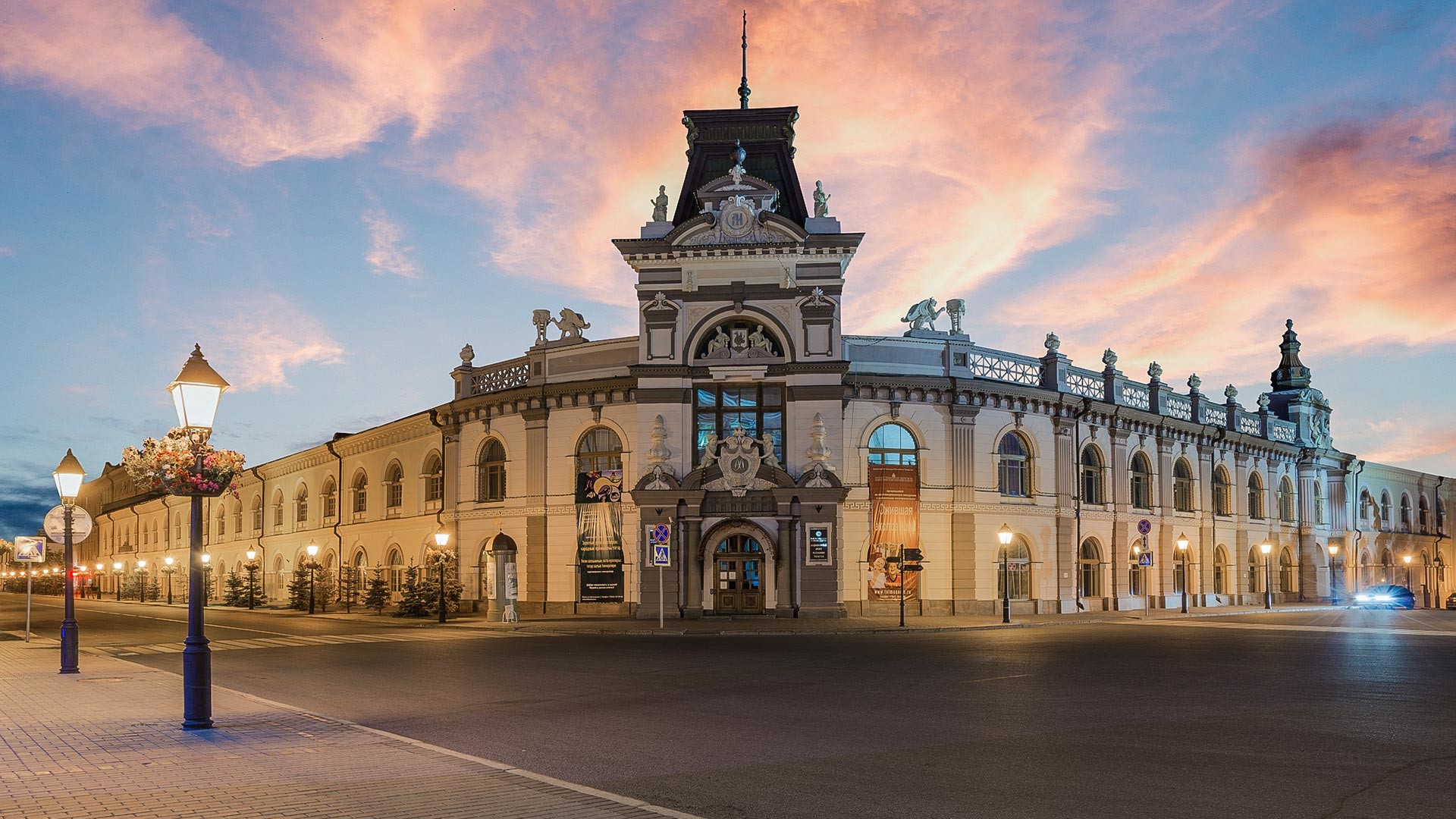 This is one of the largest historical and cultural museums in the whole Volga region and also the oldest museum in Tatarstan. The building is a former Gostinyi dvor — a historic Russian term for an indoor market or a merchant yard. Today, it contains a collection of coins, manuscripts and early printed books, as well as other valuables of Tatar culture. 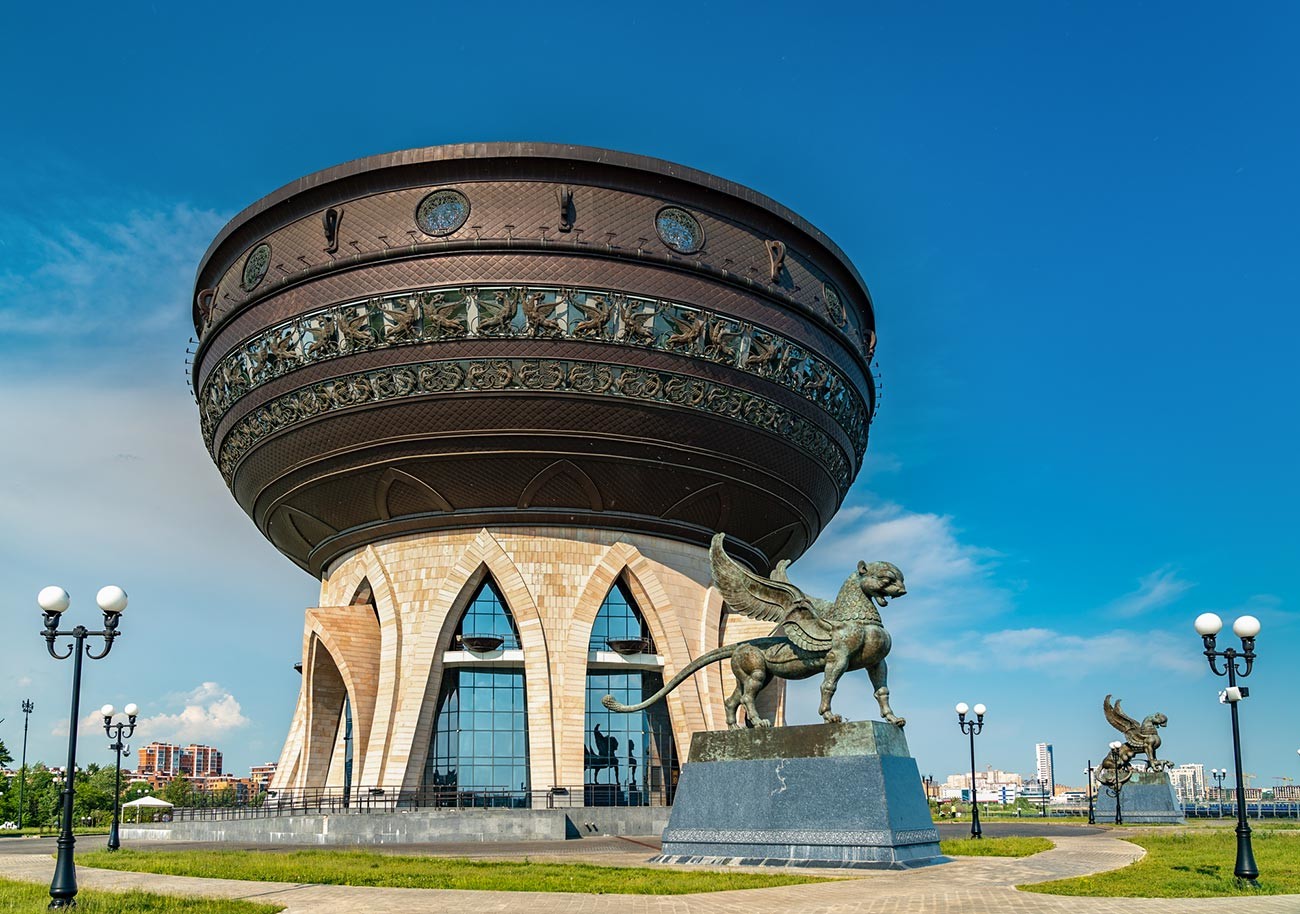 This peculiar building is a newly built wedding center, which opened only in 2013, on the bank of Kazanka River. On the rooftop, there is a double-story observation deck from which opens a magnificent panoramic view of the city’s two rivers as well as the Kremlin and the old and new parts of the city.

‘Zilants’ — legendary creatures, something between a dragon and a wyvern and a symbol of Kazan — and leopards (a symbol of Tatarstan) with their cubs stand symbolic guard over family values. Today, the Kazan Family Center is one of the best spots to take a panoramic photo of the city.

Click here to see 10 most BEAUTIFUL buildings & sites in Sochi.