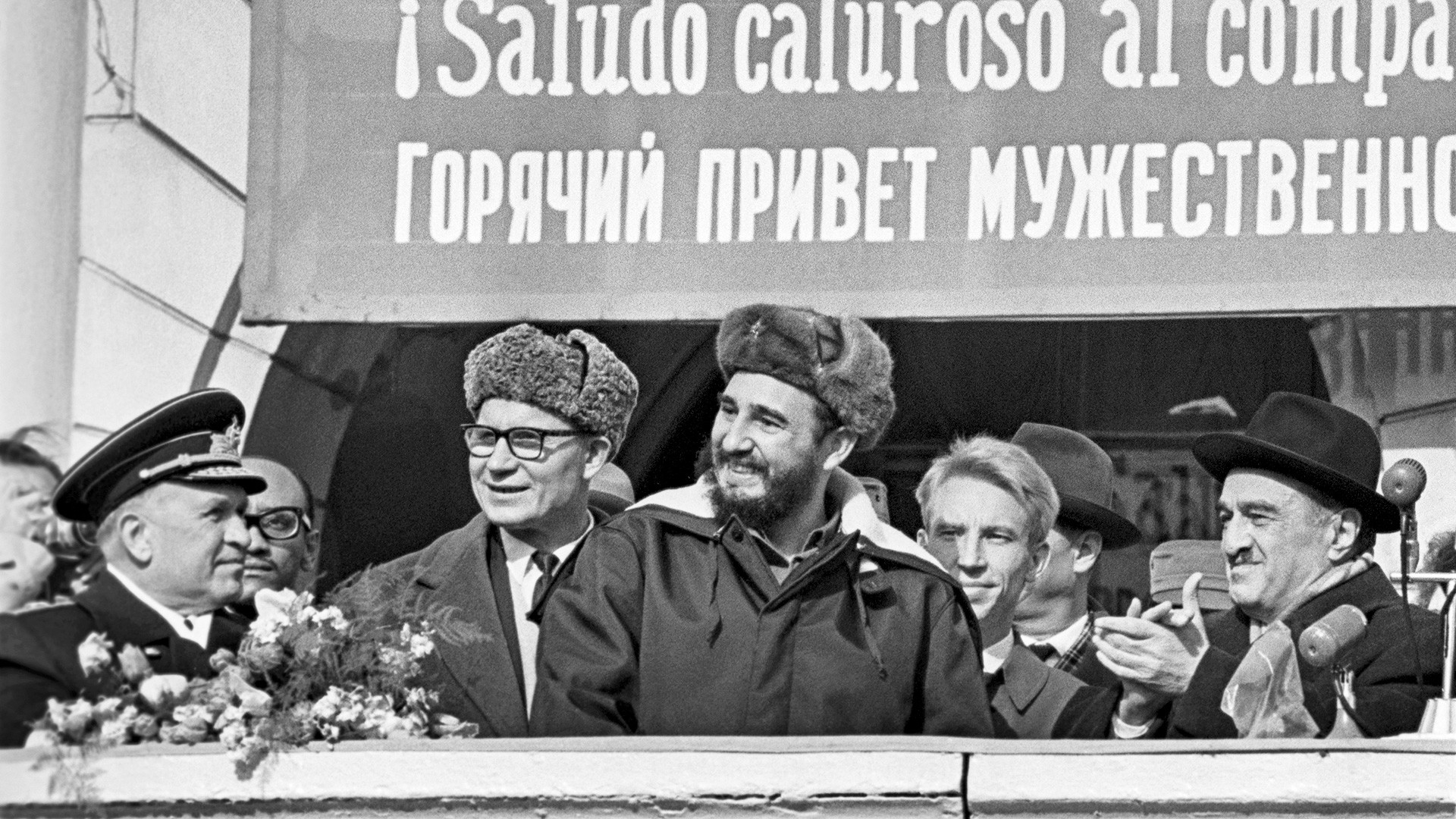 Vladimir Savostyanov/TASS
Fidel Castro’s 40-day trip around the USSR in 1963 immediately in the wake of the Cuban Missile Crisis began with a game of snowballs, cross-country skiing and a visit to the Northern Fleet.

“Son of a bitch!” This was Fidel Castro’s reaction in the 1962 Cuban Missile Crisis to the decision by Nikita Khrushchev, general secretary of the Central Committee of the Communist Party of the Soviet Union [CPSU], to remove medium-range ballistic missiles from Cuba in exchange for a U.S. pledge not to invade the Isle of Freedom. At least, this is how it is reported on the website of the State Archive of the Murmansk Region.

Castro didn’t like the fact that Khrushchev had decided to make concessions to the Americans behind his back. A slogan spread around the country: “Nikita, Nikita, lo que se da no se quita”, which in Spanish means: “Nikita, Nikita, what is given can’t be taken back.” 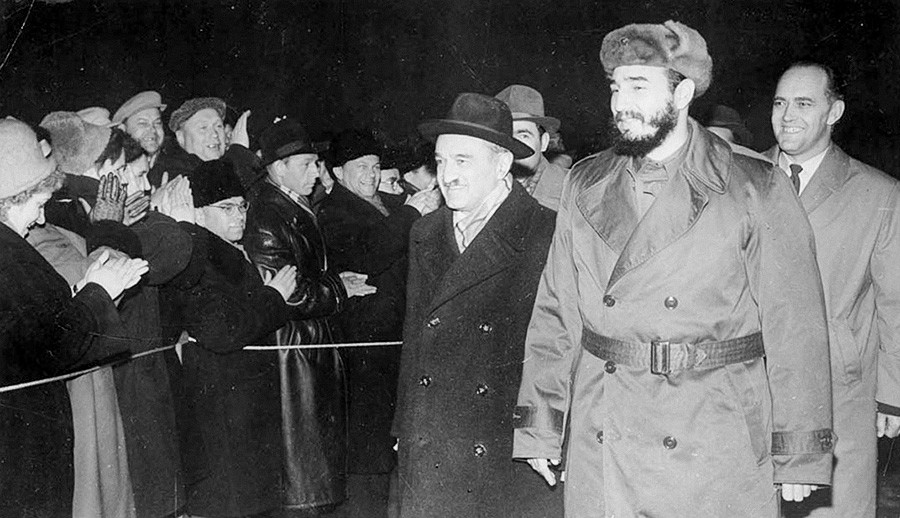 Residents of the Murmansk region welcome F. Castro at the airfield of the Olenya air base

Khrushchev had no intention of quarreling with Fidel and, in January 1963, sent a letter to the Cuban leader in which he explained that his decision to withdraw the missiles was motivated “exclusively by considerations of international security”, and invited Castro to visit the Soviet Union.

In order to get Castro to Russia, it was decided to send a Tu-114D aircraft for him to Havana via Murmansk, a city in Russia’s Far North. For some reason, Fidel initially didn’t want to fly on the plane, preferring to travel to the USSR on a regular Aeroflot flight. 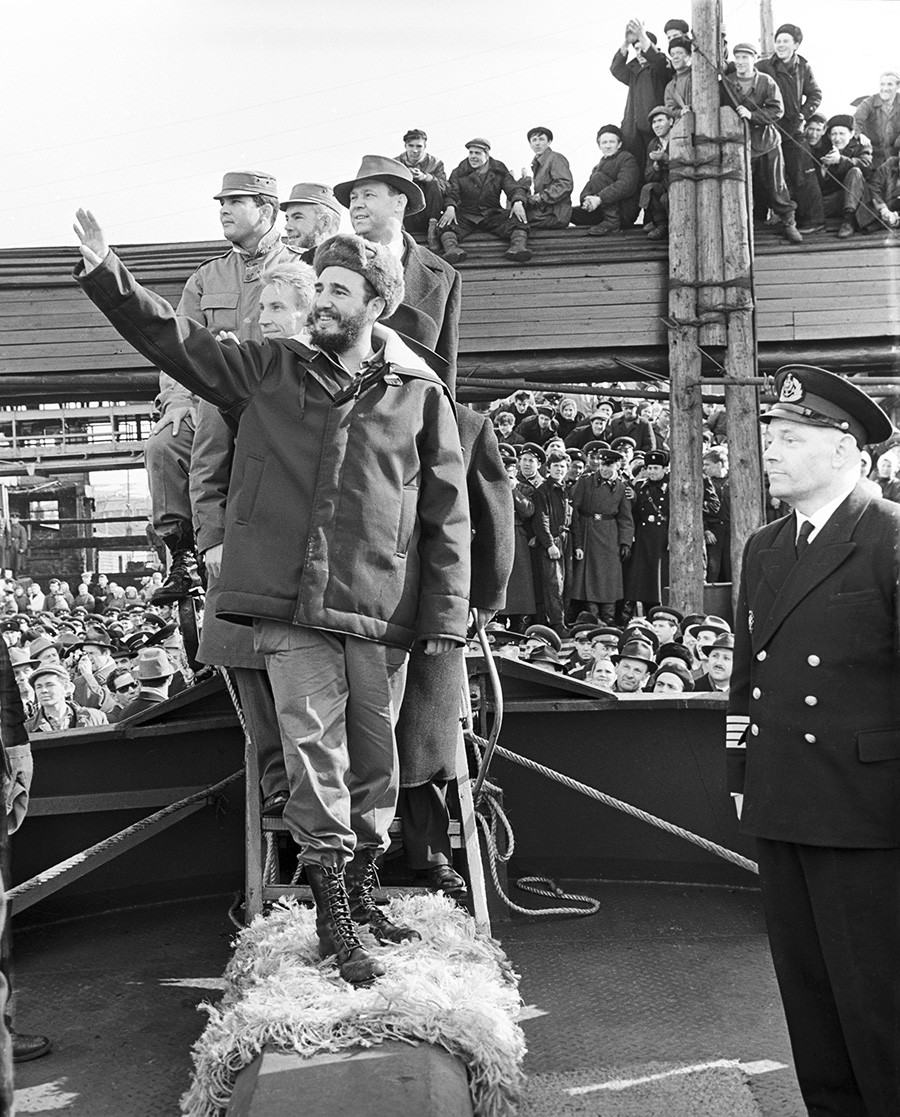 “Our Tu-114 was moved to the far end of Havana airport, allegedly owing to a malfunction and at night Fidel, with a group of 20 people accompanying him, climbed on board using not the aircraft steps, but a flimsy ladder through the hatch of the cargo compartment (all very hush-hush!). Once on board, Fidel announced that their destination was the USSR via Murmansk and this provoked unrestrained hilarity, intensified by the fact that almost no-one had brought the things necessary for the journey,” recalled Alexander Alexeyev, the Soviet ambassador to Cuba.

The flight took a long time, according to the archive’s website. During the flight, Castro played chess, chatted, read, tried on a warm hat and asked to know the result of a baseball game between the American and Cuban teams at the Pan American Games taking place in Brazil at the time. Flight radio operator Alexander Anikin contacted Moscow and was told that the Cubans had won, to which Fidel replied: “I thought they would…” 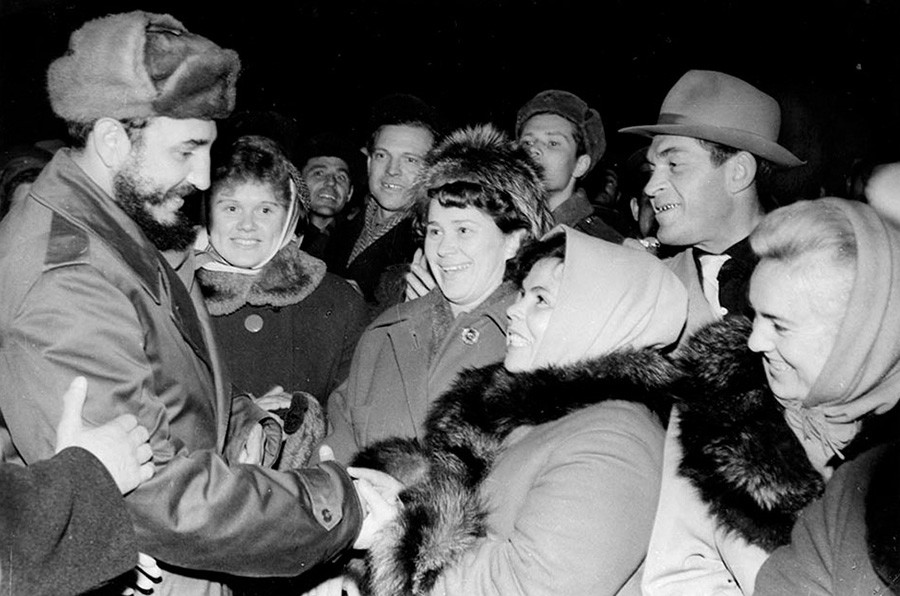 Residents of the Murmansk region welcome F. Castro at the air base airfield

In Murmansk, meanwhile, preparations for Castro’s arrival were in full swing. The authorities tried to keep the visit a secret, but the rumor mill did its work.

“Fences were never repainted in the city at this time of year, but suddenly dozens of decorators were tirelessly sprucing them up. There were still banks of snow piled up, so the fences were painted down to the level of the snow. Flags were put up everywhere, despite the fact that there was still a long time to go before the May holidays. The Murmansk firefighters’ orchestra was ‘secretly’ practising the Cuban national anthem,” recalled Nikolai Leonov, a KGB officer.

Meeting with the Russian public and visit to the fishing port

His aircraft landed at the Olenya air base near Olenegorsk at roughly 3 am on April 27, 1963.

“Applause broke out, drowning out the sound of the orchestra. Gusts of wind stirred the state flags of the Soviet Union and the Republic of Cuba, displayed together. Then a tall, energetic-looking, bearded man, whose manly figure is known the world over, appeared on the aircraft steps,” a Pravda special correspondent recounted to readers. Castro came out of the plane in a fur cap with earflaps and a khaki jacket, listened to the Cuban and Soviet national anthems and got into a car which took the delegation to a special train bound for Murmansk. 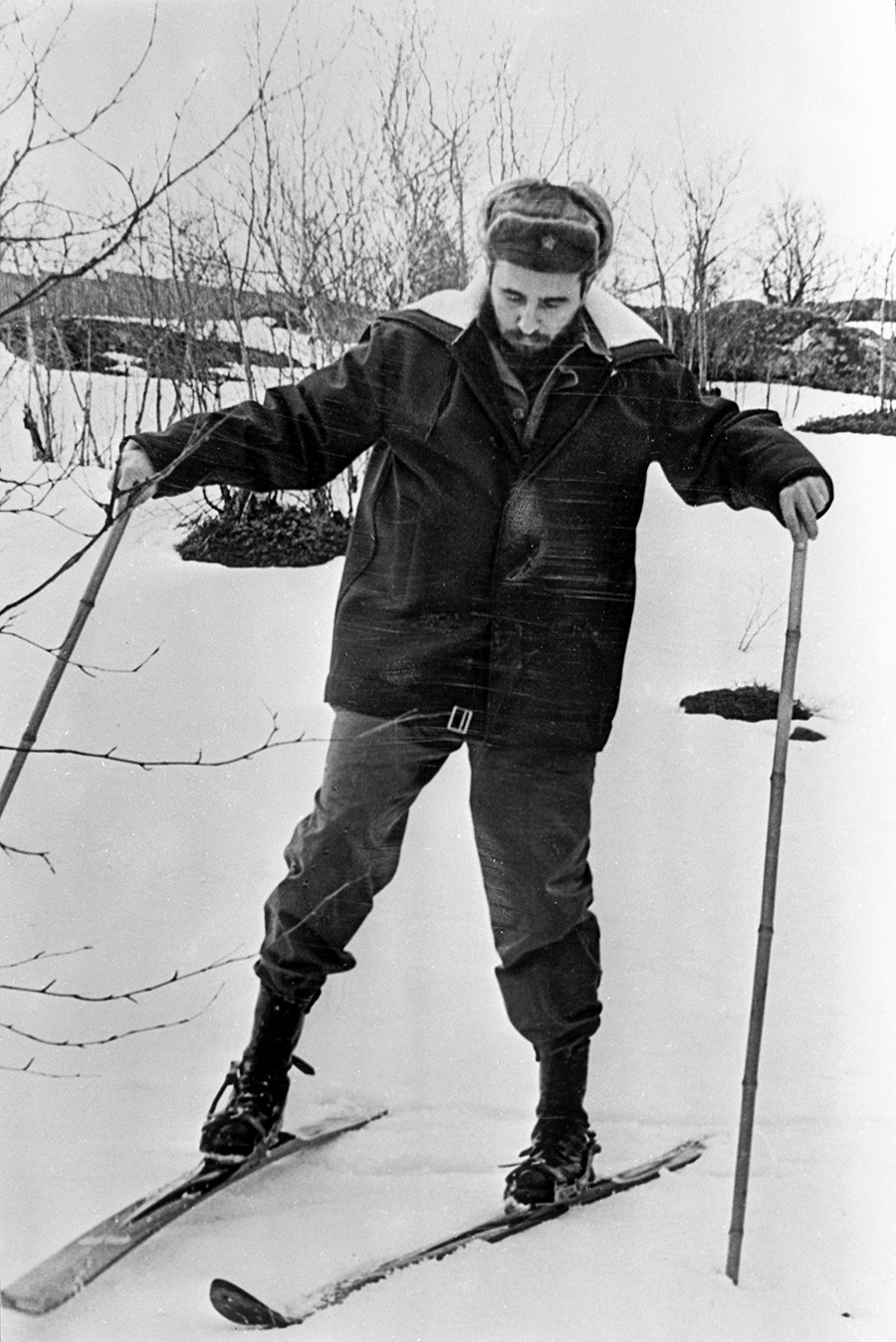 Fidel Castro's visit to the USSR

Fidel Castro arrived in Murmansk at 10 am. Tens of thousands of local people had completely filled the square in front of the station and adjoining streets, while schoolchildren skipped lessons and workers left their factories in order to catch sight of the Cuban leader. 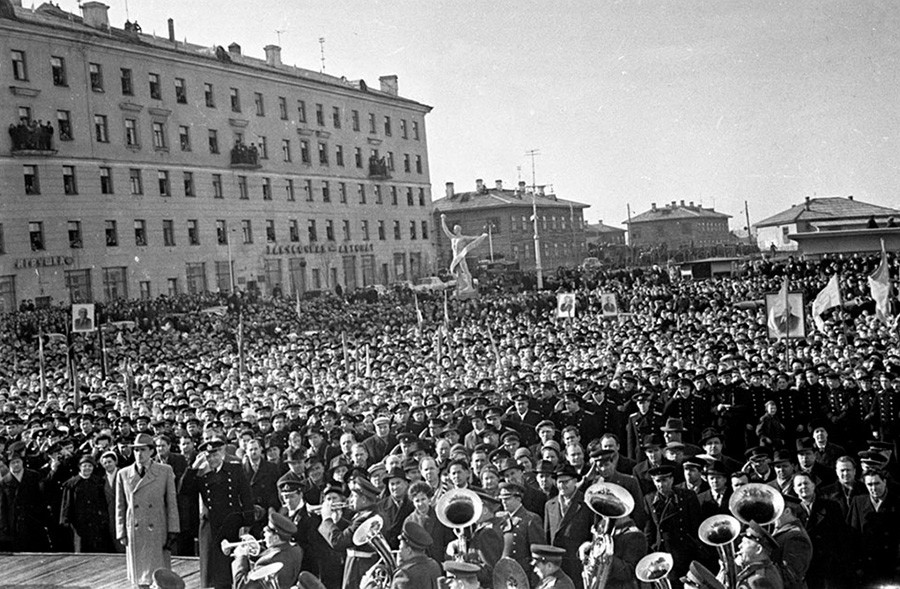 “People were sitting on rooftops and hanging on lamp posts - they were all welcoming the Cubans effusively. Some people even had tears in their eyes. Everyone was shouting out greetings to Cuba and its leader, everyone was chanting ‘Viva Cuba!’,” Petrozavodsk resident Alyona Alatalo says, quoting a letter written by her father, who witnessed Castro’s arrival. According to him, Castro had a “tired but happy look in his eyes and was very unpretentious, and everyone liked him”.

“The temperature here is something we are unaccustomed to in our country, it’s so cold. But you have ardent hearts. And we and all the Cubans who have come to your land feel this ardor,” Fidel said in his speech of greeting. 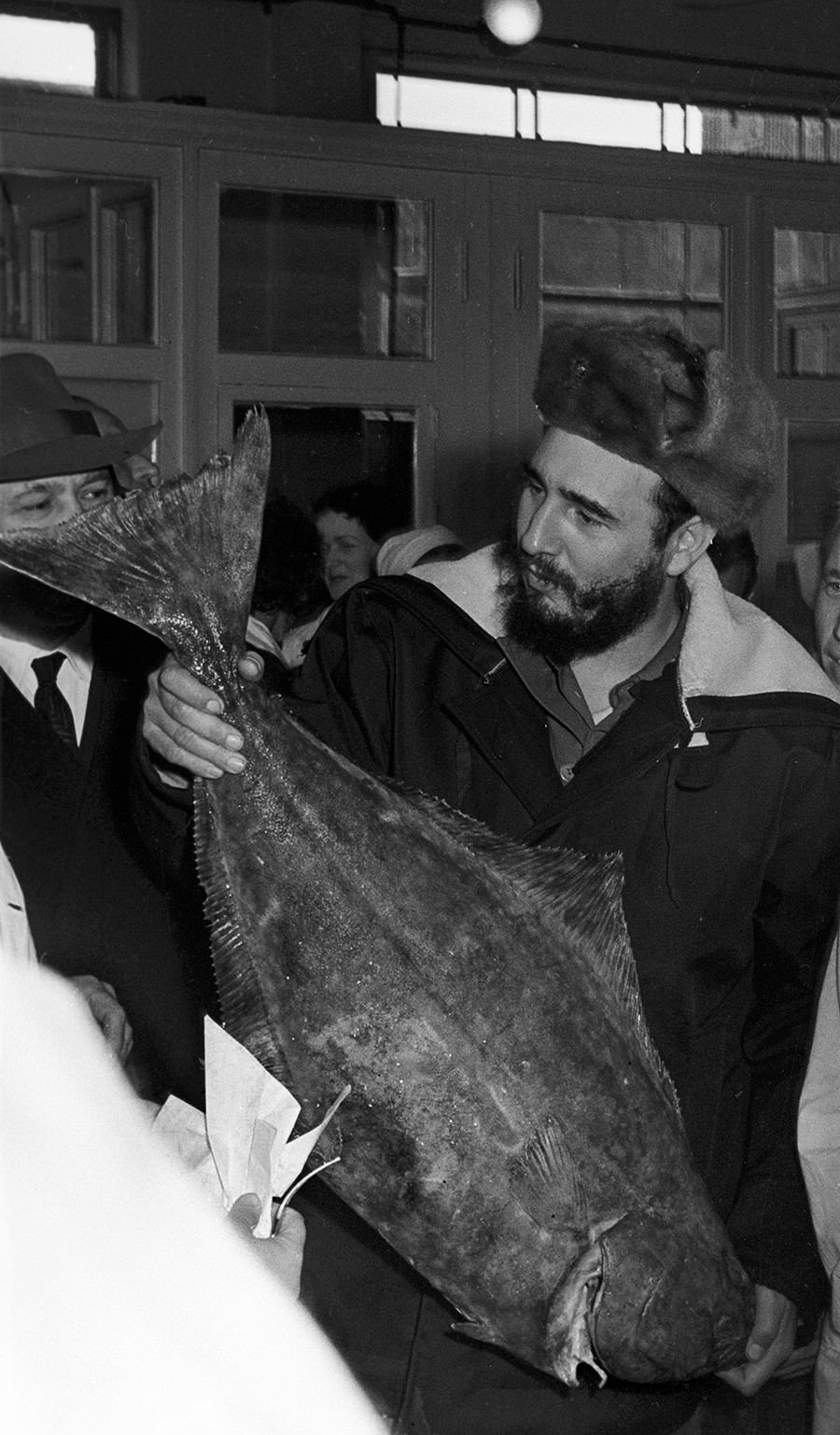 Chairman of the State Council and Council of Ministers of the Republic of Cuba, leader of the Cuban revolution Fidel Castro visits a fish factory in Murmansk, USSR

After the meeting, Castro headed for Khrushchev’s local dacha, which became his residence for the duration of the trip. Fidel was overjoyed with the snow - he would throw it up in the air, cover himself with it and taste it and walk into banks of snow until he almost disappeared up to his waist. He also tried skiing, but continually fell over.

Then Castro visited the icebreaker ‘Lenin’, the Murmansk fishing port and the local fish processing plant. At the plant, he ate a piece of skewer-grilled catfish and sampled cold-smoked halibut and sea bass and other dishes. The fish dumplings proved to be his favorite. As a farewell present, he was given an enormous halibut, which he scarcely managed to hold in his hands. 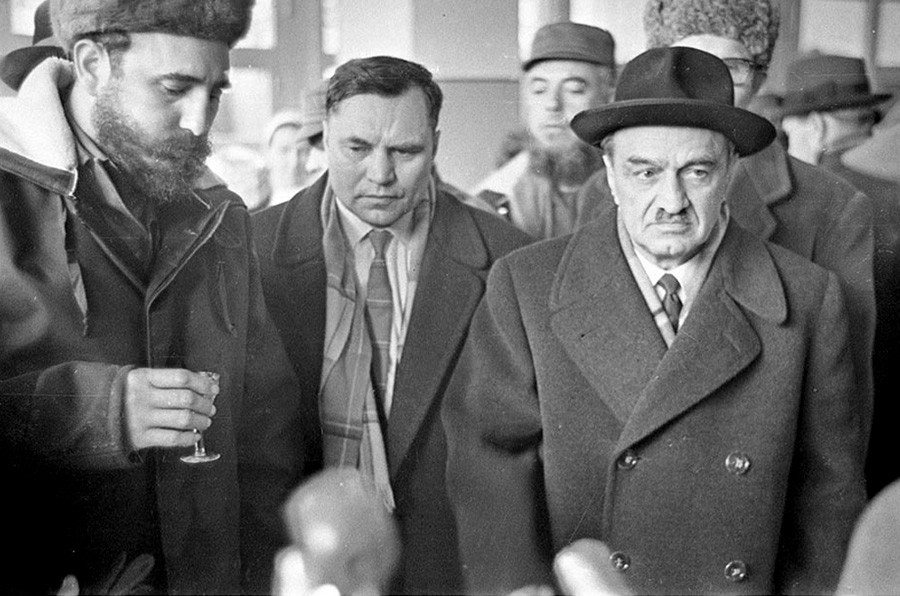 At the Murmansk fish processing plant. A toast to the Cuban-Soviet friendship

“When Castro came out of the fish processing plant, members of the public were waiting outside. There was a pile of barrels on the quayside. People were sitting and standing on them. Some girls started asking for a photograph with him. Castro quickly clambered onto one of the barrels and they were all snapped for a souvenir photograph,” Alyona Alatalo’s father wrote.

On the morning of April 28, Fidel Castro came to view the Soviet Northern Fleet and went on board a destroyer. To protect him from the cold, the Cuban leader was presented with a black jacket with white fur (of the kind then worn by naval sailors) and an officer’s fur cap with earflaps. He spent the entire day dressed like this.

On leaving the ship, Castro watched a cruiser firing off an international salute of 21 artillery salvoes in his honor. He was then shown a submarine with ballistic missiles. Castro asked for the hatches to be opened and one of the missiles to be put into its launch position. 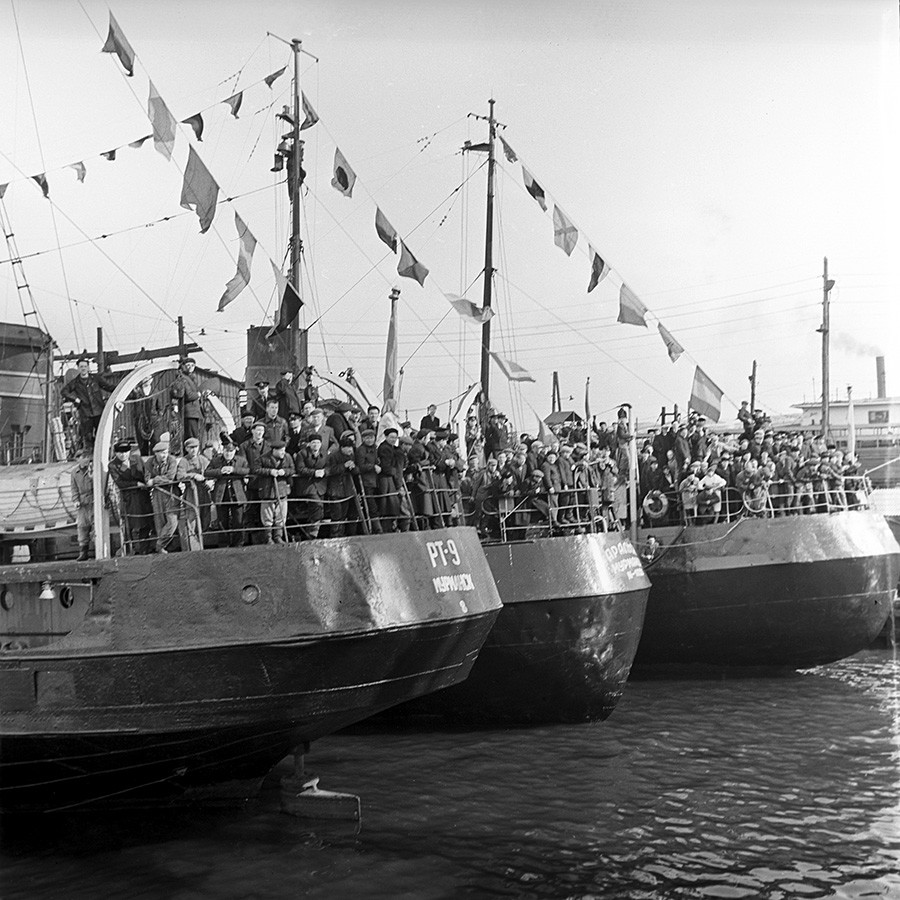 “Comrades, let us applaud this miracle of technology, this achievement of Soviet scientists and designers. This missile guards the peace and tranquillity of our countries and peoples,” Castro proclaimed.

In the view of Nikolai Leonov, this was the only reason Castro went out to the Northern Fleet.

“His main objective was to ascertain for himself that the Soviet Union possessed appropriate retaliatory measures to respond to the nuclear threat from the U.S.,” Leonov recalled. 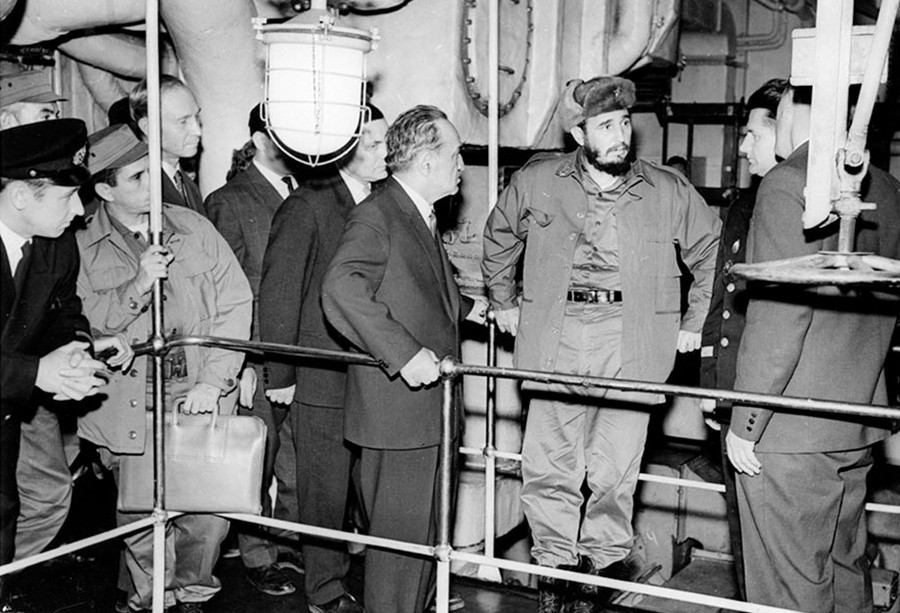 Castro in the engine room of the icebreaker "Lenin"

Fidel was then taken to the Severomorsk-1 military airfield, but he didn’t spend long there. Immediately after a tour of the site, he headed for Moscow on an Il-18. El Comandante returned to the Isle of Freedom via the Kola Peninsula again. 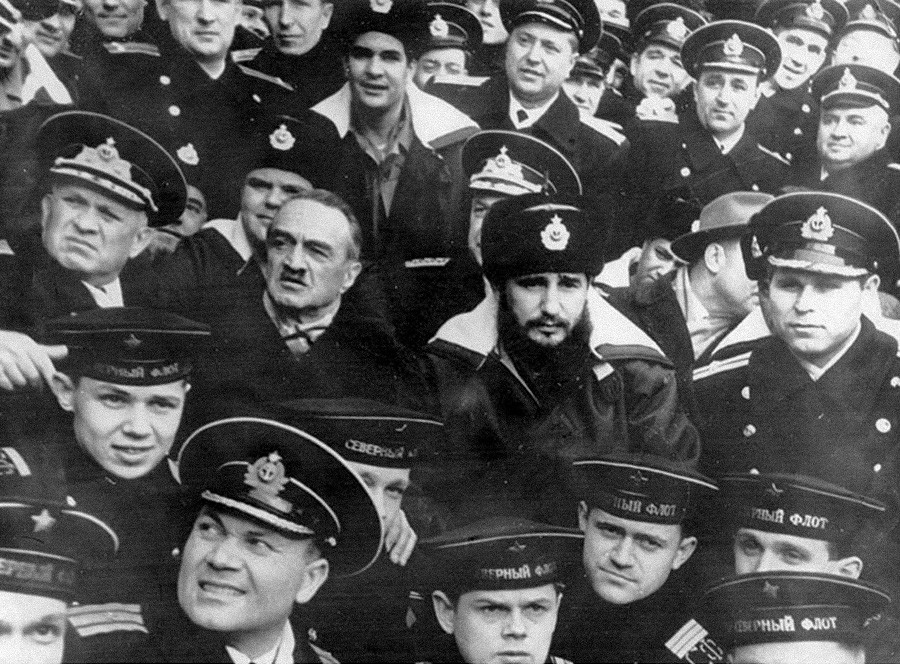 Castro in the Northern fleet

It is over 50 years since Fidel’s two-day stay in Murmansk, but locals still recall the Cuban leader’s visit with warmth. For instance, the archive’s website cites the following comment by a local woman:

“One of my earliest and most vivid childhood memories was the tears I shed at not seeing Fidel Castro drive by on Lomonosova Street. There were a lot of people waving small Cuban and Soviet flags… Castro was a long time coming. My attention strayed and I started playing with a small girl on some grass. And I missed the whole thing. My mother only managed to comfort me by explaining that no-one had seen Fidel Castro, but only his hand sticking out of the car as a greeting to the people of Severomorsk… ‘Cuba - My Love!’”