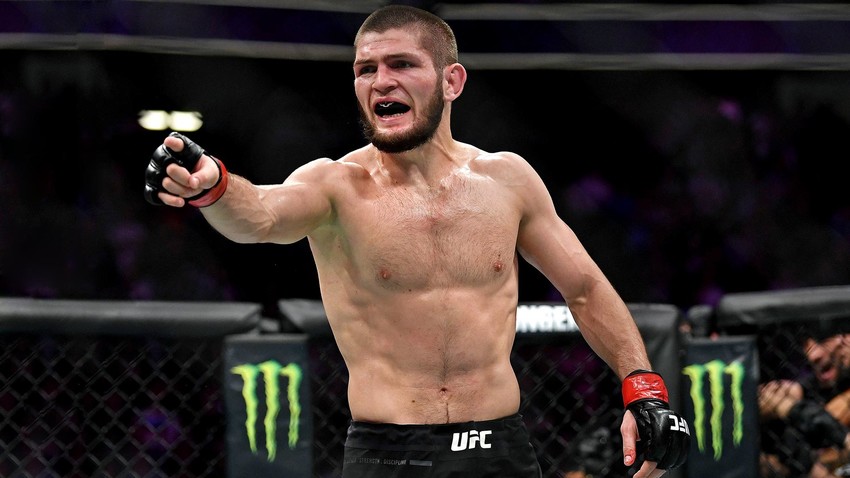 Reuters
We pay tribute to the best pound-for-pound fighter in the world who just hung up his gloves by highlighting the best fights in his illustrious career.

Khabib beat his first opponent in the UFC in his classic way - taking his opponent to the ground, smashing him there and forcing to give up with a painful submission. Shalorus unsuccessfully tried to crawl away from Khabib, yet all of his efforts ended up in vain. Once he turned his back to Khabib, the Russian immediately grabbed him under the neck and choked his opponent out.

Back in 2013, Thiago Tavares was one of the most promising fighters from Brazil. He looked frowningly at Khabib during the face-offs as the Brazilian crowd shouted “You’re Dead!” to the Russian while he smiled. The reason for that reaction was Khabib’s entry to the face-offs in a shirt with a text saying: “If Sambo was easy it would be called Jiu Jitsu”

Two minutes after the fight began, Khabib threw a great uppercut right into his opponent’s jaw. The Brazilian fell to the ground and ended up unconscious as the Russian sat atop of him throwing ruthless elbows to the head.

This was the day Khabib showed all of his submission potential.

Khabib’s next opponent was American Michael Johnson, on whom the eagle showed, in particular, his ability to conduct painful techniques. By the third round, Johnson was holding on only to his spirit and strong-willed qualities. In the two previous rounds, he was completely exhausted by the relentless pressure of Nurmagomedov, who ruthlessly threw him on the floor and hit him with elbows.

At first, the Russian fighter demonstrated that he was superior to the American on his feet, landed a number of precise hits and, in a minute and a half, took Johnson to the ground, where he demolished his opponent by the cage. This technique is feared by all of Khabib's opponents, as it is considered his signature move.

Having established control over his opponent with both hands and feet, Nurmagomedov carried out his attacks, simultaneously talking to him and persuading Johnson to surrender. The American refused to give up, even after ‘The Eagle’ took a position on top and began to ruthlessly hit his opponent. But the referee intervened when Khabib changed his position to apply the ‘Kimura’ (named after legendary Japanese judoka and professional wrestler Masahiko Kimora)  fracturing his opponent's shoulder joint.

This was the day Khabib showed his superiority over one of the best strikers in the fighting game.

Edson Barboza was famous for his vicious high kicks and earned his fame by knocking out his opponents in this spectacular way. Prior to the fight, he was promoted as Khabib’s greatest and biggest threat thus far.

Yet, once the cage was closed, all of the Brazilian “threat” evaporated. Khabib shortened the distance and gave his opponent no opportunity to throw his high kicks, as he spent minute after minute laying on a ground defending from the Rissian’s  elbows and fists.

After the first round, Barboza was completely exhausted and needed the help of his three teammates to get back up on his feet.

And in the second round, eye-witnesses noticed total frustration on his face. as the Brazilian didn’t know what to do and how to get the better of Khabib.

The fight ended up going to the judges with Khabib scoring 30 to the Brazilian’s 25.

Well, the most entertaining and resonant performance by Khabib is his fight with the notorious Conor McGregor.

The denouement of their fight came in the fourth round, when Nurmagomedov successfully took out the legs of his opponent, after which, after a series of blows, he masterfully worked to improve his position. First, ‘The Eagle’ tried to go for a choke from behind and then, when this move did not work, he applied another one, going behind the back and snapping a tight lock around the Irishman's neck.

It was obvious from the way Khabib acted in the end of the fight that there was a personal animosity between the rivals. Nurmagomedov clamped down on Conor's jaw with fierce rigidity and eventually, just seconds later, McGregor was forced to tap the Russian’s hand, signaling his surrender.

The referee, who was in close proximity to the opponents, immediately began to separate them, but Khabib did not seem to want to remove the grip. And after that, the well-known events began with ‘The Eagle’ jumping out of the cage and getting involved in a mass brawl both in the octagon and in the auditorium.