What’s it like to end up in a Russian hospital with Covid-19? 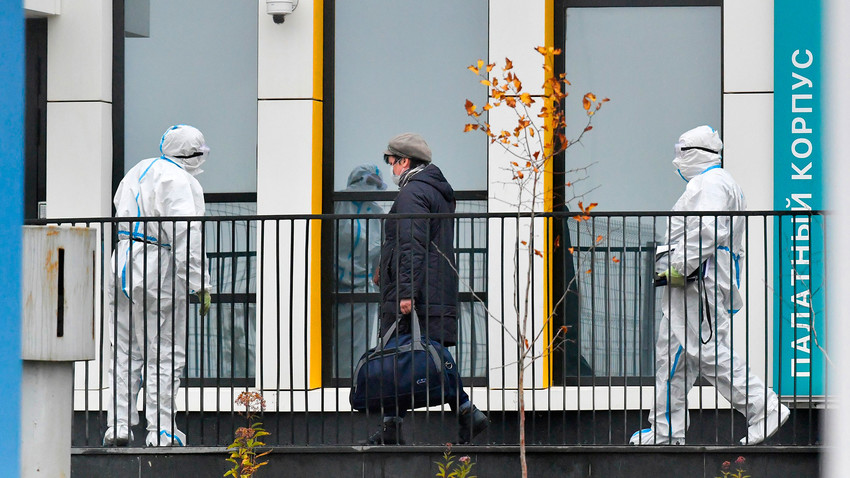 Kiselev Sergey / Agency "Moscow"
Like the rest of the world, Russia is experiencing a surge in coronavirus cases. Since mid-October, the daily increase in the number of people testing positive hasn’t fallen below 16,000. So, what is it like to end up in a Russian hospital and is it that easy to get into one right now?

When American tennis player Sam Querrey (49th in the world rankings), together with his wife and eight-month-old baby, flew to St. Petersburg for the ATP 500 tournament in mid-October, he couldn’t have known how it was all going to end. Upon arrival, he had a routine test for Covid-19, which came back negative. But, before the tournament he was tested again and this time the result was positive, as was his wife’s. Then the family was placed under quarantine in a five-star hotel. Two weeks in luxury conditions.

The three Querreys were instructed to quarantine for 14 days at their hotel in St. Petersburg.

As the St. Petersburg Four Seasons is famous across the tour for being fancy as all heck, this was something the Querrey family was purportedly very ready to obligingly do.

However, soon afterwards the tennis player received a telephone call from Russian public health officials and this somewhat spoiled his plans: A doctor had been sent to check for symptoms and, Querrey concluded, if any symptoms were found, they would all be admitted to hospital and probably even to different ones.

The athlete, who believed he did have some mild symptoms, decided not to wait for the doctors' verdict. Fearing ending up in a Russian hospital, he arranged for a private jet to whisk the family out of Russia. Yes, in breach of all health and safety protocols. Sitting in the back of the aircraft to be as far from the pilots as possible, he was flown to “a European country” that doesn’t require a negative test for entry. There he rented an Airbnb apartment. Now Querrey is facing a fine of up to $100,000 and a three-year suspension from tournaments.

Are Russian hospitals really so scary? Russians on the web laughed at Querrey’s fear of ending up in a Russian medical institution, but there were also others who supported Querrey in his desire to flee at any cost. Because, they say, how good your hospital is going to be is a “matter of chance and pure luck”.

Good conditions, but little chance of experiencing them 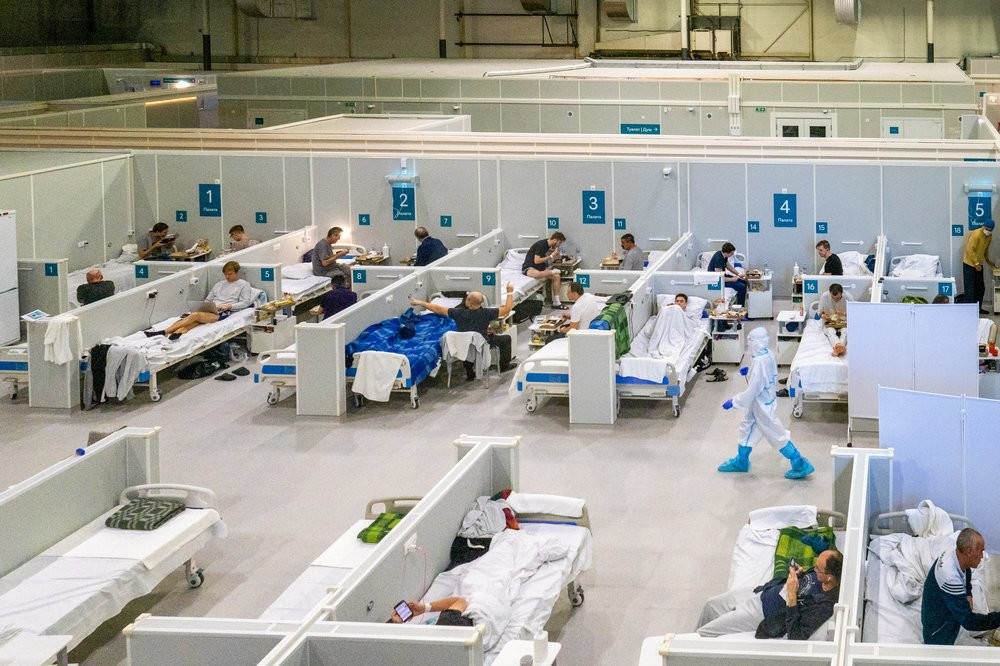 Given that all this is only available to wealthy clients, beds for private patients are available even when the pandemic is at a peak. On the other hand, most Russians are treated free of charge under the state medical insurance system. Previously, all those who contracted coronavirus or were suspected of having it in Moscow were admitted to one of two hospitals for infectious diseases, as well as a new hospital complex in the settlement of Kommunarka outside the city, which has become the country’s “main Covid hospital”.

In March, one Kommunarka patient, Katerina Nazarova, said the hospital was like the Umbrella Corporation from Resident Evil: “The corridors are wide and deserted. I have a room for two all to myself. The room has an en suite bathroom with shower and a plasma TV. Once or twice [a day] the floor and all the surfaces are washed with bleach - a couple of times they did it in a perfunctory manner but it is usually done thoroughly. About five times [a day] they ask me if I have any rubbish.” 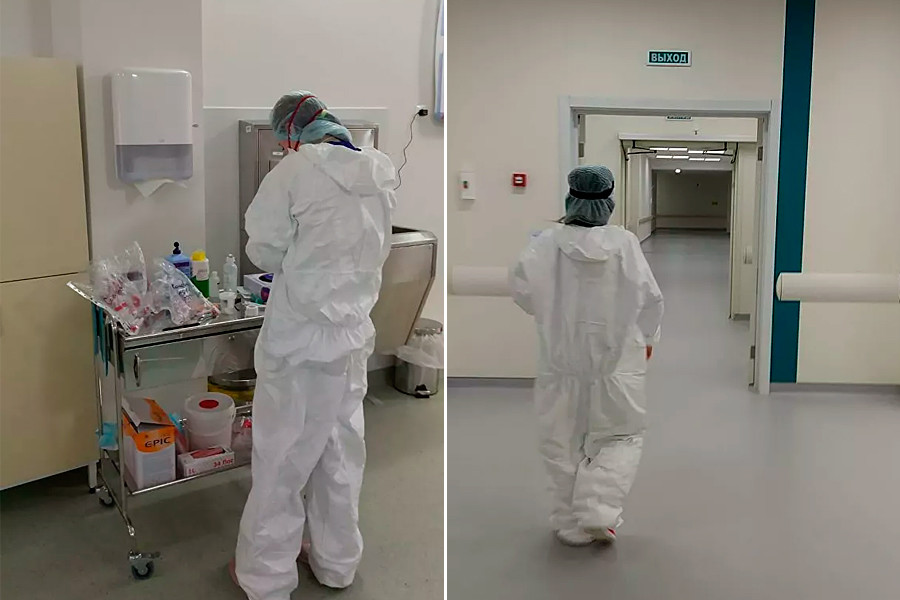 They started the tests straight away, she says: “I’ve never been checked up as thoroughly as here. They took lots of tests. Even in the admissions department they immediately took swabs from my nose and throat to check for coronavirus, blood from a vein and urine in two test tubes; I had an ECG test and a CT scan of my lungs. Also, they’ve recently taken a blood sample for biochemistry analysis.”

There are five meals a day, all food is packed in individual disposable containers, boiling water is brought individually to every patient and poured in a cup. There’s access to the internet and you can continue working remotely. Contact with family and friends is only virtual. The clinic is divided into a “red” and green” (clean) zone. Nobody, except medical personnel, can enter the red zone. 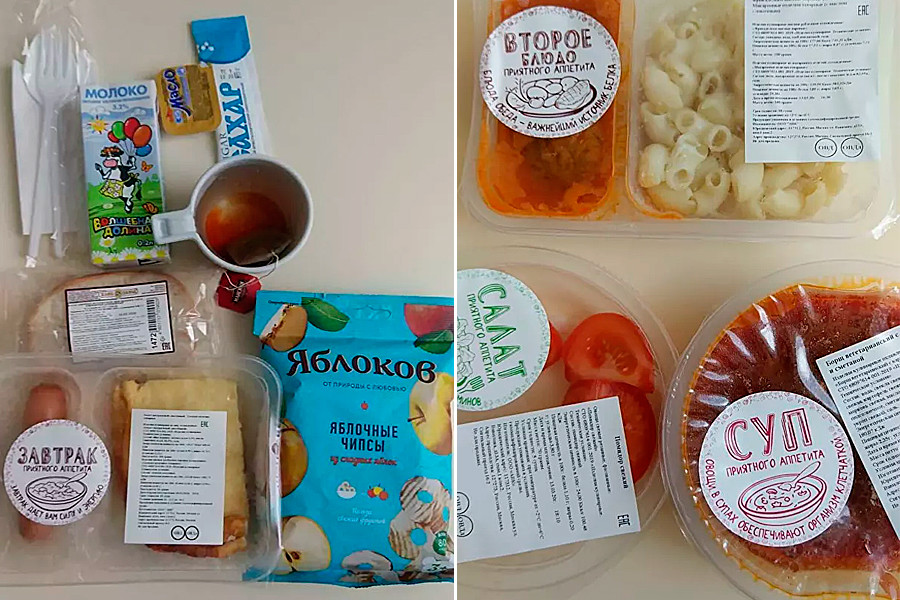 “Parcels from outside are allowed. And this is organized in a very cool way, not like ordinary hospitals, where you can only drop off a parcel between 14:00 and 17:00. Here you can receive a parcel from morning till 22:00, and they are delivered to your room every two to four hours,” Katerina says.

Hospitals in which such zones were not initially established have been reorganized. “During Covid, planned operations have stopped. We have created a clear route management system for getting around the building, including where the ‘clean’ and ‘dirty’ zones in our five-storey building are, to be and how patients are to be admitted. We have set up and equipped disinfection rooms, trained our staff and put red and green stickers with clear signs everywhere. We have removed armchairs from the conference room - it now has beds for the use of staff who want to rest and a changing room for them. The X-ray department is now a decontamination area, the physiotherapy rooms have also become a rest area and doctors sleep on the massage tables,” said a critical care doctor from St. Petersburg (anonymously). 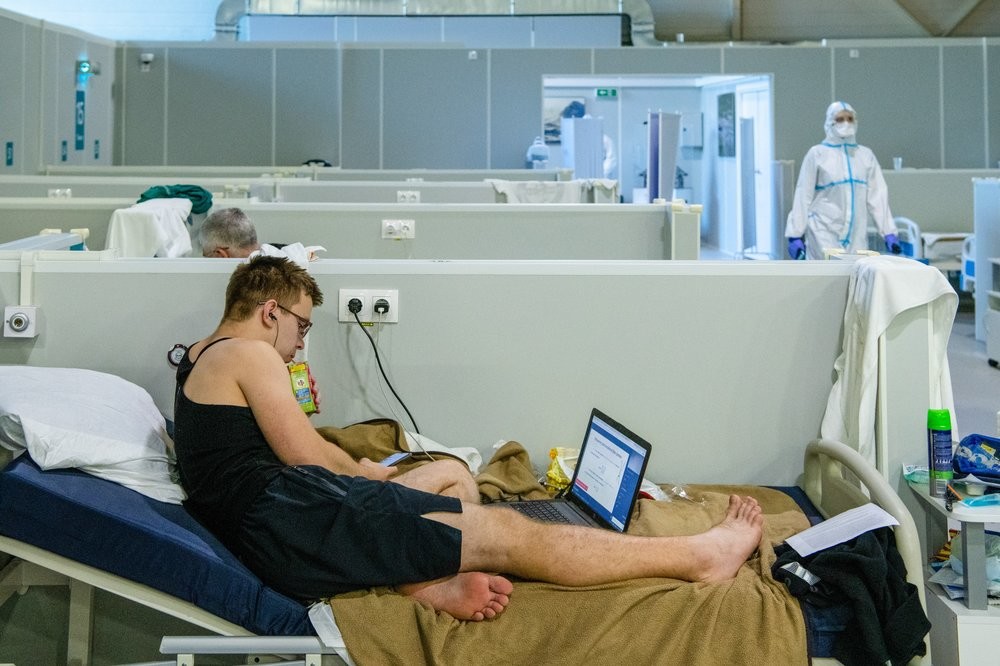 But, over time, the growing number of cases have forced the authorities to redesignate non-specialist hospitals across the country as “Covid hospitals” and to open overflow hospitals (in Moscow they are housed in exhibition halls and at an ice stadium). In the regions, however, the situation contrasts sharply with the state of affairs in the new Moscow clinics. 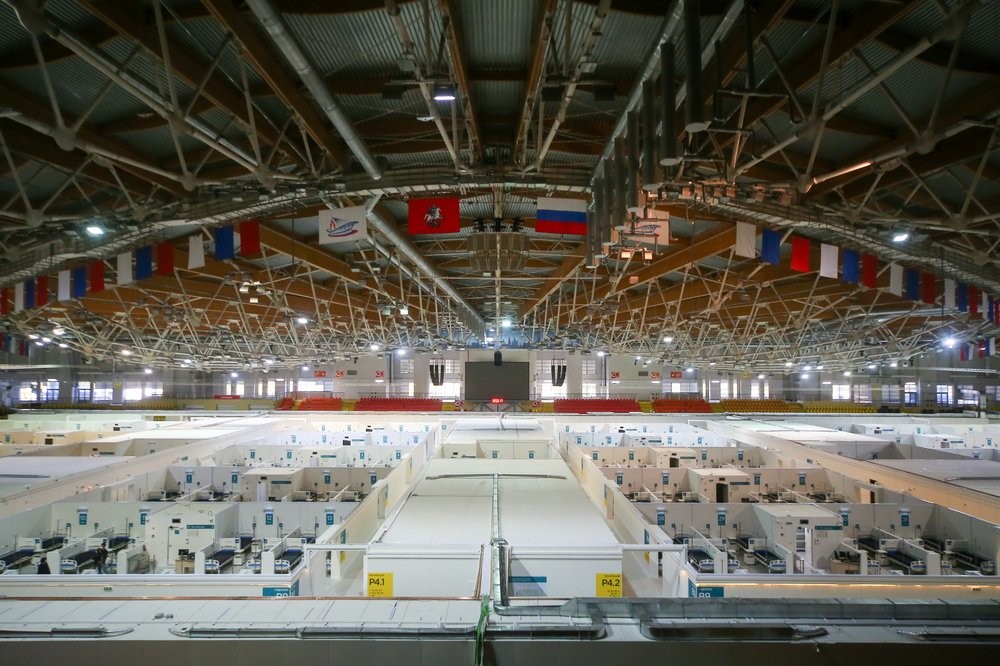 Temporary hospital on the territory of the Krylatskoye ice palace

Bring your own bed or face a long wait

The coronavirus pandemic has exposed two of the principal shortcomings of the health reform carried out in 2014-15, noted Andrei Klepach, chief economist of the VEB.RF state development corporation back on March 28, during the first wave. It has led to a fall in the number of in-patient beds and also a reduction in the number of infectious disease physicians and mid-level and junior medical personnel. All this had a consequential impact on preparedness for the pandemic: In late September, the Russian Health Ministry announced that 89 percent of beds for coronavirus patients were occupied. In certain regions - for instance, the Altay Territory - 97 percent were already occupied (2,111 of 2,168) as of September 28. 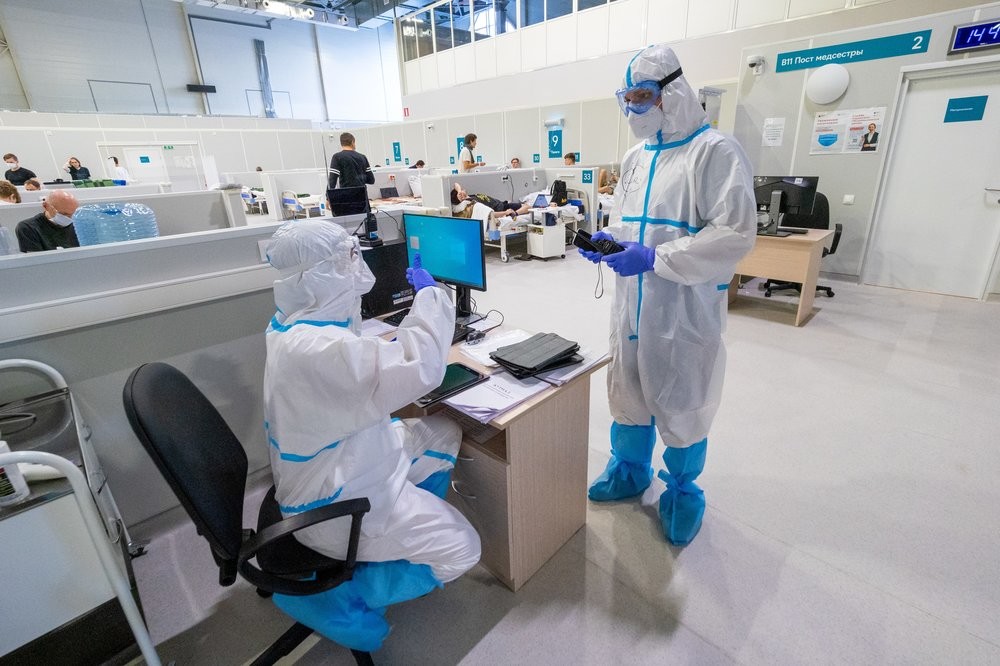 The Kommersant newspaper reports that diagnostic departments are failing to cope with the influx of patients, who at times are having to wait 6-8 hours in line for a walk-in CT scan of their lungs. Patients cannot be hospitalized without the result of a CT scan being available - this rule is confirmed by doctors. The husband of Muscovite Anastasia had to wait several hours to be seen by a doctor and undergo the procedure: “He spent all this time in a corridor with a temperature of 39°C, and at different times there were between six and 15 people like him. When he had the CT, his lungs turned out to be less than 25 percent affected and he was sent home in a taxi. We were refused hospitalization. And the doctor from the outpatient clinic will not do a home visit,” she says. In Ufa, patients have had to wait 12 hours to be seen.

“Not everyone is hospitalized: If their lungs are less than 45 percent affected and saturation levels are adequate, people are sent for outpatient treatment,” confirms Sergei M., a Moscow Region ambulance medic. 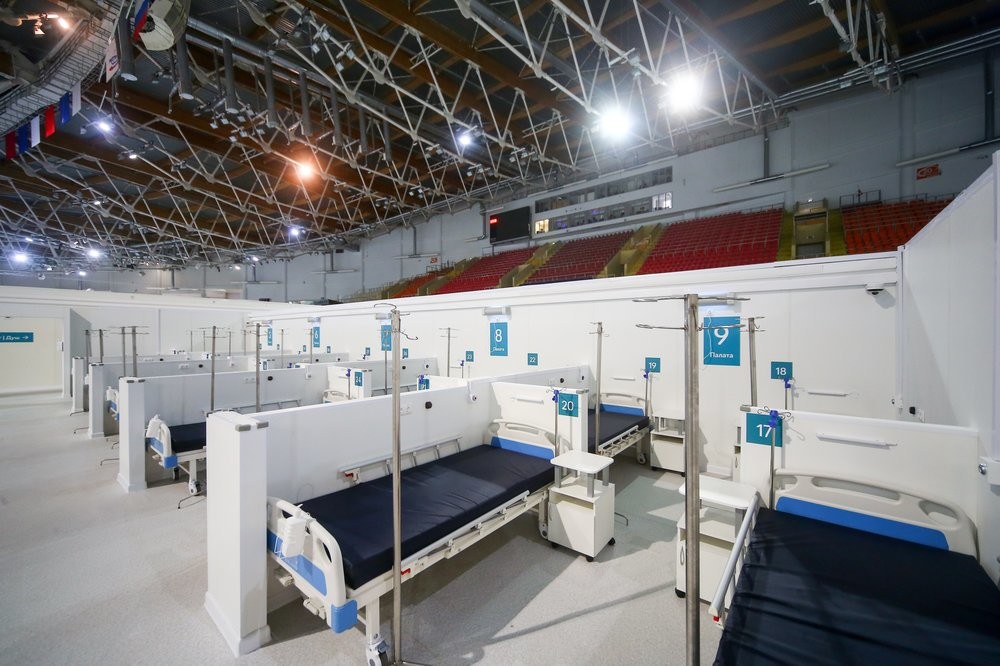 Temporary hospital on the territory of the Krylatskoye ice palace.

In some regions, people are refused hospitalization on the grounds of a shortage of beds, even when they present with a considerable degree of pulmonary infection. This was the case with a resident of Novotroitsk in Orenburg Region and the authorities have not commented on this situation yet. The wards are also overcrowded in a hospital in Lipetsk (465 km from Moscow), where doctors are forced to seek a solution by admitting patients who come with their own folding beds. “They say that otherwise people will have to be treated in chairs,” says Denis Vlasov, who brought his 70-year-old mother-in-law for treatment (he also brought a folding bed with him). 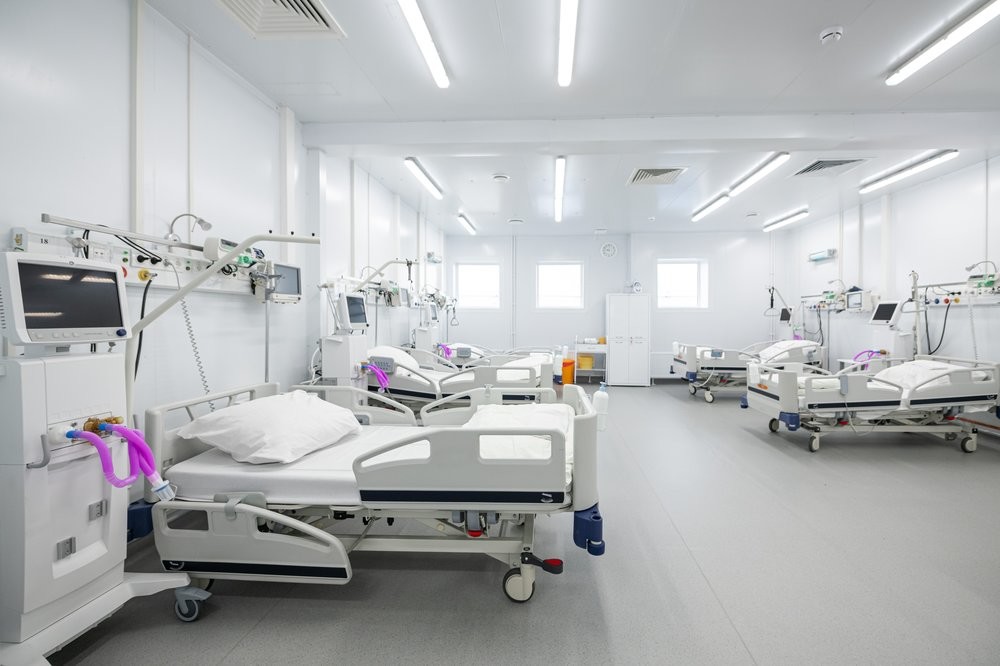 On September 25, male ambulance nurse Artyom Boriskin posted a video on his Instagram page showing a line of 20 vehicles marked with red crosses which had brought patients for CT scans or for admission to hospital. “Just think how many crews are prevented from working while they wait in the line with patients with suspected Covid,” he wrote. The ambulance crews also have to line up as patients go through the hospital admission procedure - patients are only allowed into the assessment room one at a time and, because of the complicated bureaucracy involved, it can often take around an hour for the formalities to be completed; all this time, ambulances with patients stand waiting outside the hospitals.

As a result, people sometimes even face a very long wait when they call an ambulance to their home. The coordinator of the Magnitogorsk department of the ‘Deystviye’ medical worker trade union Azamat Mustafin told the Znak.com online news site: “People with a high temperature are finding it very difficult to get a doctor or an ambulance to come to them (there is frequently a delay of 48 hours).” 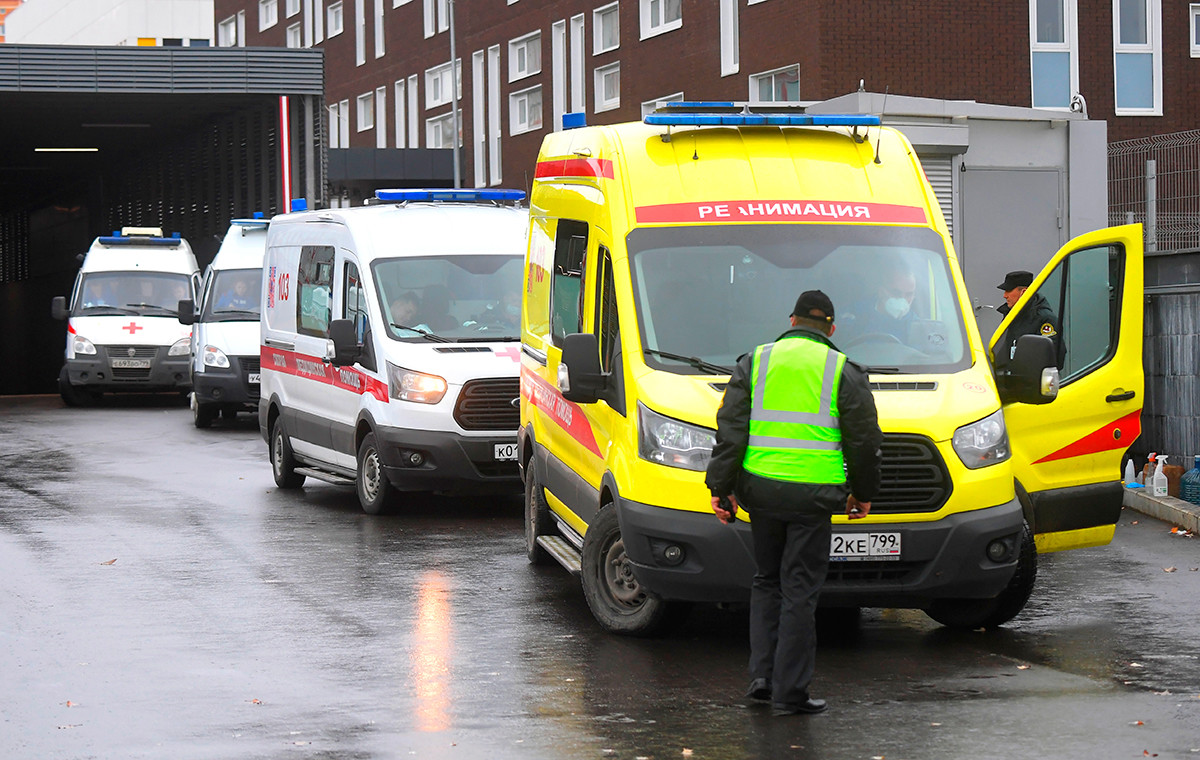 At the same time, the division into zones is not being strictly observed in all hospitals. “The distinction between ‘red’ and ‘green’ zones has been greatly eroded. The ‘green’ zones are full of Covid [patients diagnosed with Covid] and attempts are being made to get rid of and isolate the Covid. Nothing they do is succeeding. Examination of Covid patients and non-Covid patients is done in the same diagnostic departments. In the CT room, a non-Covid patient can be followed by a Covid patient,” according to Sergei K., a critical care physician from Moscow, speaking to the Mash news site. And not everyone is lucky with the conditions they can expect once they are in hospital. No separate showers or TVs. It’s a case of taking any available place.

There are now problems even in Moscow's main “Covid hospitals”. A source at Kommunarka hospital said that the number of patients there had doubled over the recent period and, what is more, the majority of cases were presenting with a more serious clinical picture than in the spring. The hospital’s chief doctor Denis Protsenko says the increase in the number of cases was the explanation for the ambulances lining up. “The rapidity with which the situation is deteriorating is a serious concern,” he added.

Many hospitals are attempting to solve the problem of places by discharging patients. It has now been officially permitted to do so in the absence of a negative test result, in other words, before the patient has recovered. Patients are being discharged if they have no fever or breathing impairment.