What Romanov family treasures can you find in the British royal family’s jewelry boxes? 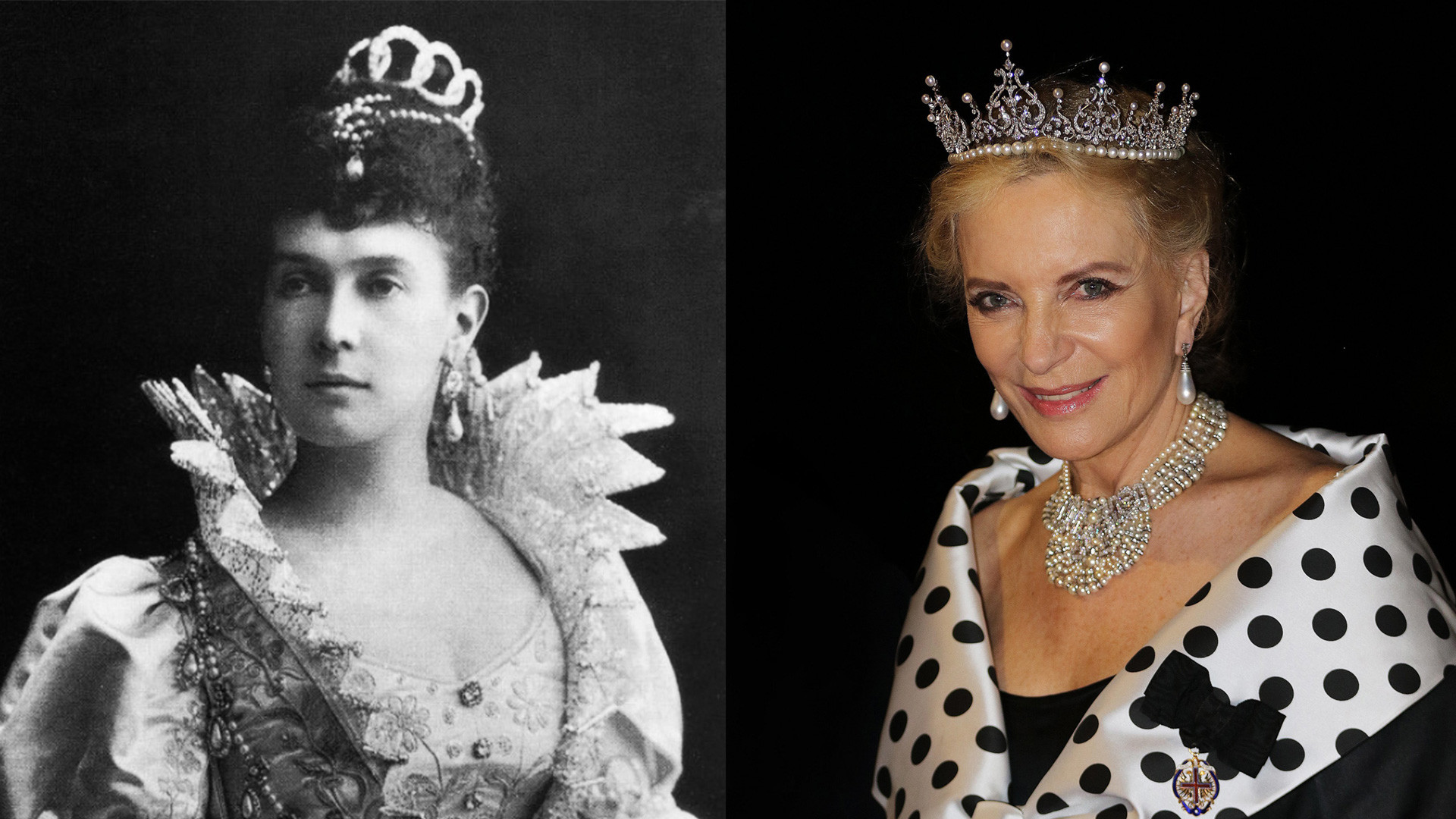 Public domain; Legion Media
Queen Elizabeth II, along with various British duchesses and princesses, can regularly be seen wearing sapphires and pearls that once came from the Russian Empire.

After the 1917 Revolution, many of the House of Romanov’s treasures were smuggled out of the country one way or another. This happened on such a large scale that it is nearly impossible to make even a rough estimate of how many pieces of jewelry were lost.

Sometimes foreigners and officials smuggled diamonds out of the country. In 1918, for example, the American author John Reed was detained at the border with large amounts of jewelry belonging to the sister of Nicholas II, Olga (he had hidden precious stones in the heels of his shoes). Meanwhile, the jewelry that wasn’t smuggled out and instead wound up in the Bolsheviks’ possession was remorselessly sold off at numerous European auctions. At the time, the new government needed money, and items of jewelry were broken up and sold off in pieces, literally "by weight." This is what happened to many Romanov tiaras and diadems (which you can read about here).

In the 1920s, auction catalogues featuring jewelry from the Russian Empire began to circulate around Europe, and anyone with enough money could buy a precious stone or a ring.

In 1926, the Bolsheviks auctioned off the Imperial crown jewels. The lots included 773 items. Of these, 114 pieces can now be found in the Kremlin's Diamond Fund. The remaining pieces were put up for auction numerous times. We know that the British antique dealer Norman Weiss bought nine kilograms of jewelry and precious stones, paying just £50,000 in total. Weiss then resold them to Christie's Auction House, where the jewelry was broken up into 124 lots and put up for auction in March 1927. The most valuable piece was the bridal crown of the last empress, Alexandra Feodorovna, which is adorned with 1,535 diamonds.

The pearl-drop tiara went for £310, while the"Wheat Sheaf" tiara with a 35-carat yellow diamond fetched £240. Their real value was, of course, much higher. 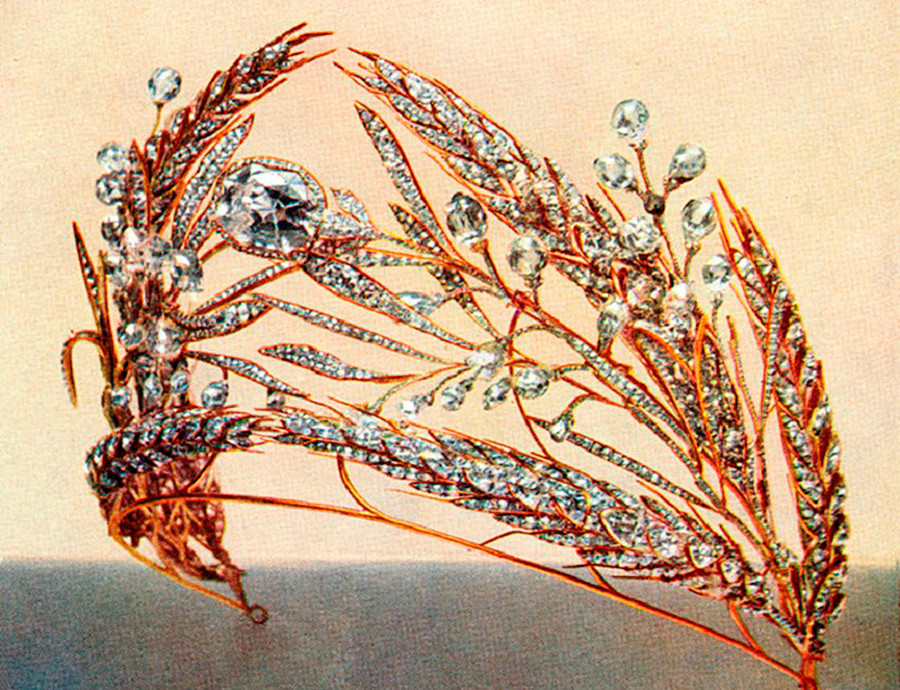 "Wheat Sheaf". This photo was made for the auction.

The Romanovs who managed to flee Russia smuggled personal pieces of jewelry out with them and later sold them to other royal families. Many ended up in Britain. 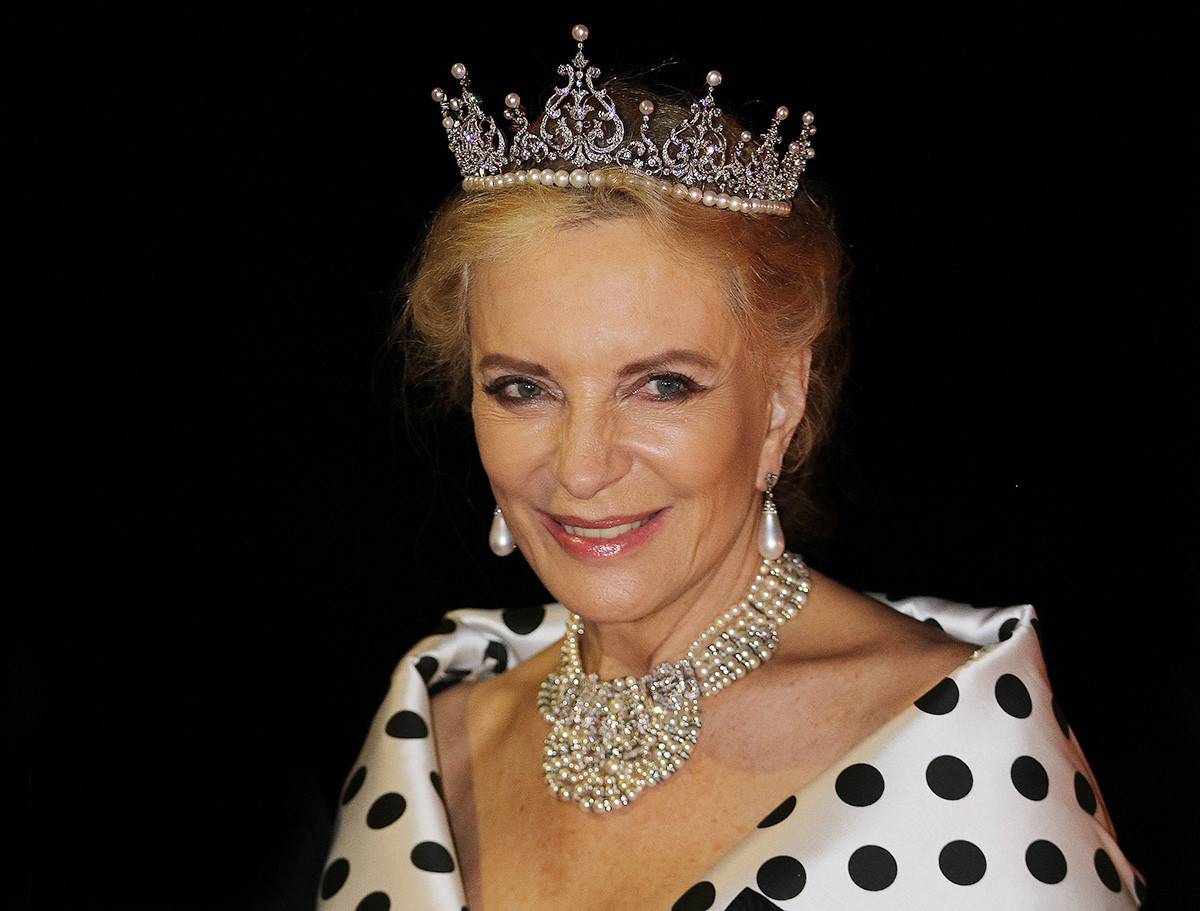 Princess Michael of Kent at the Royal Palace in Tirana, Albania, October 2016.

The Baroness Marie Christine von Reibnitz, the spouse of Prince Michael of Kent (who in turn is a first cousin of Elizabeth II and, through his mother, the great-great-grandson of Russian Emperor Alexander II), owns pearl drops that once belonged to Grand Duchess Maria Pavlovna. 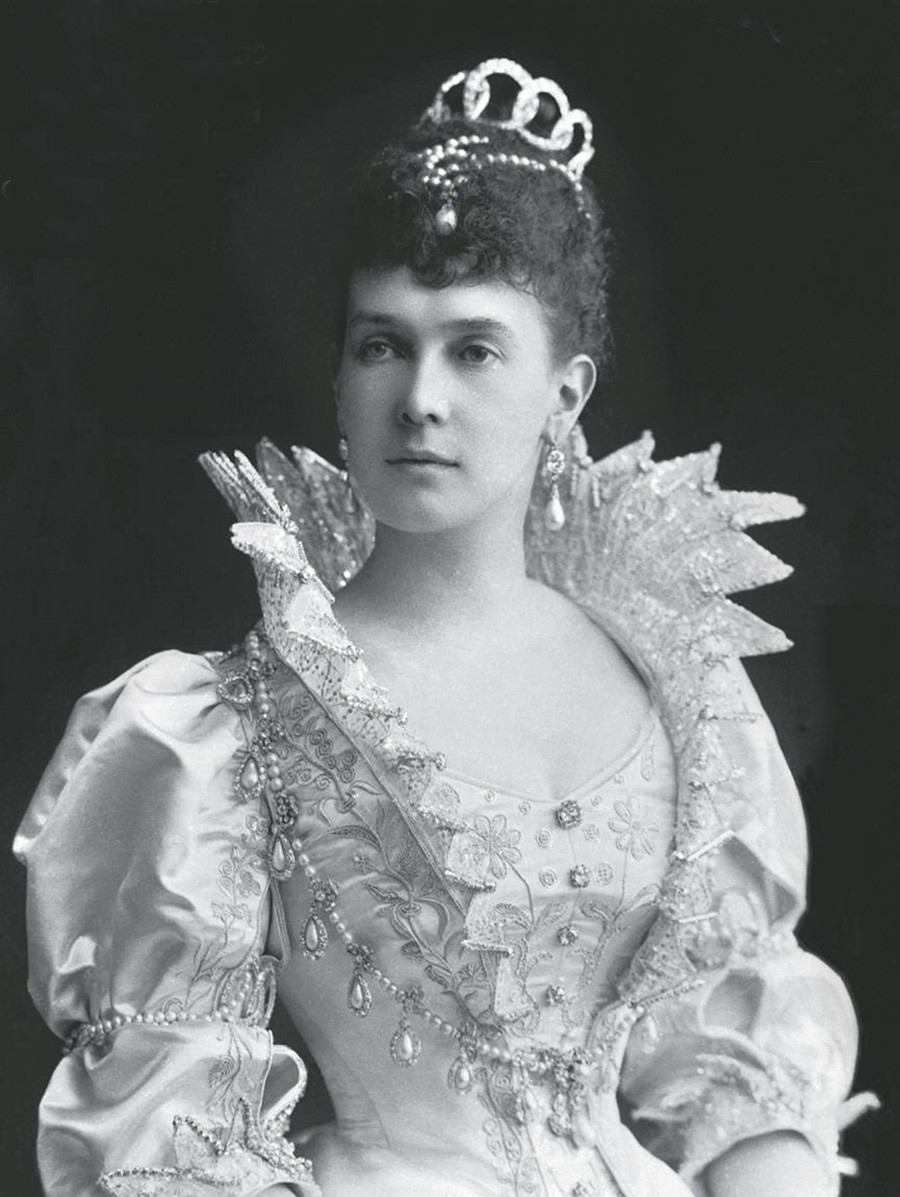 This is the same Maria Pavlovna who managed to smuggle some of her most sumptuous jewelry abroad inside pillowcases during the revolution. The Grand Duchess bequeathed all her jewelry to her daughter, Elena Vladimirovna, Princess Nicholas of Greece and Denmark. However, she was forced to sell some of her mother's jewels due to financial difficulties. Elizabeth II herself now sparkles sometimes at official receptions in Maria Pavlovna's Vladimir Tiara. 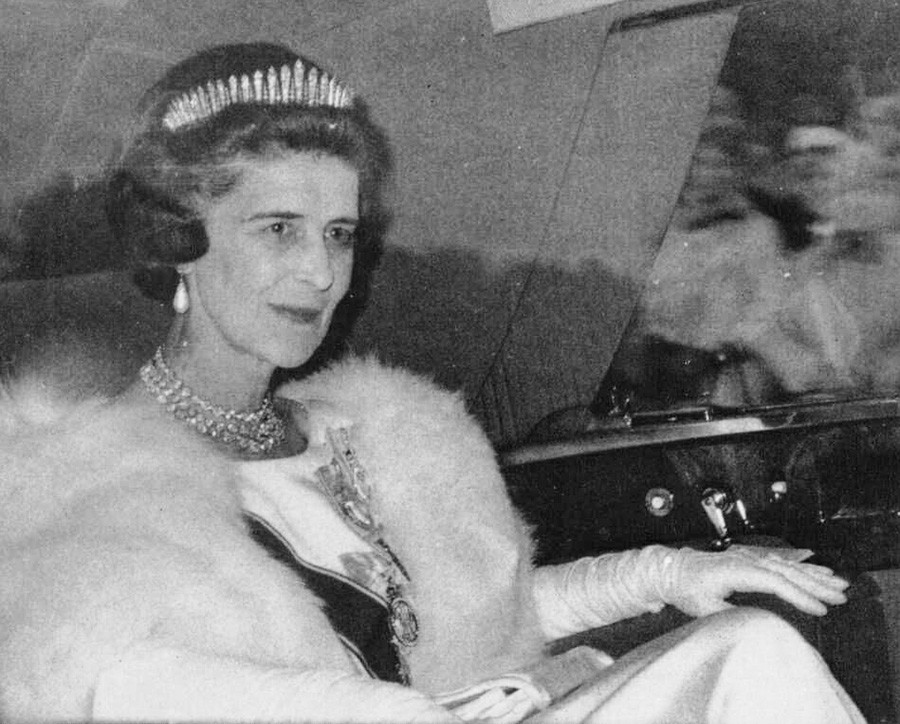 1960's Princess Marina in the fringe tiara and pearls.

As for the pearl-drop earrings, Elena passed them on to her daughter, Princess Marina of Greece and Denmark, who later bequeathed them to her son, Michael of Kent. He, in turn, presented them to his spouse, who enjoys wearing them on outings. 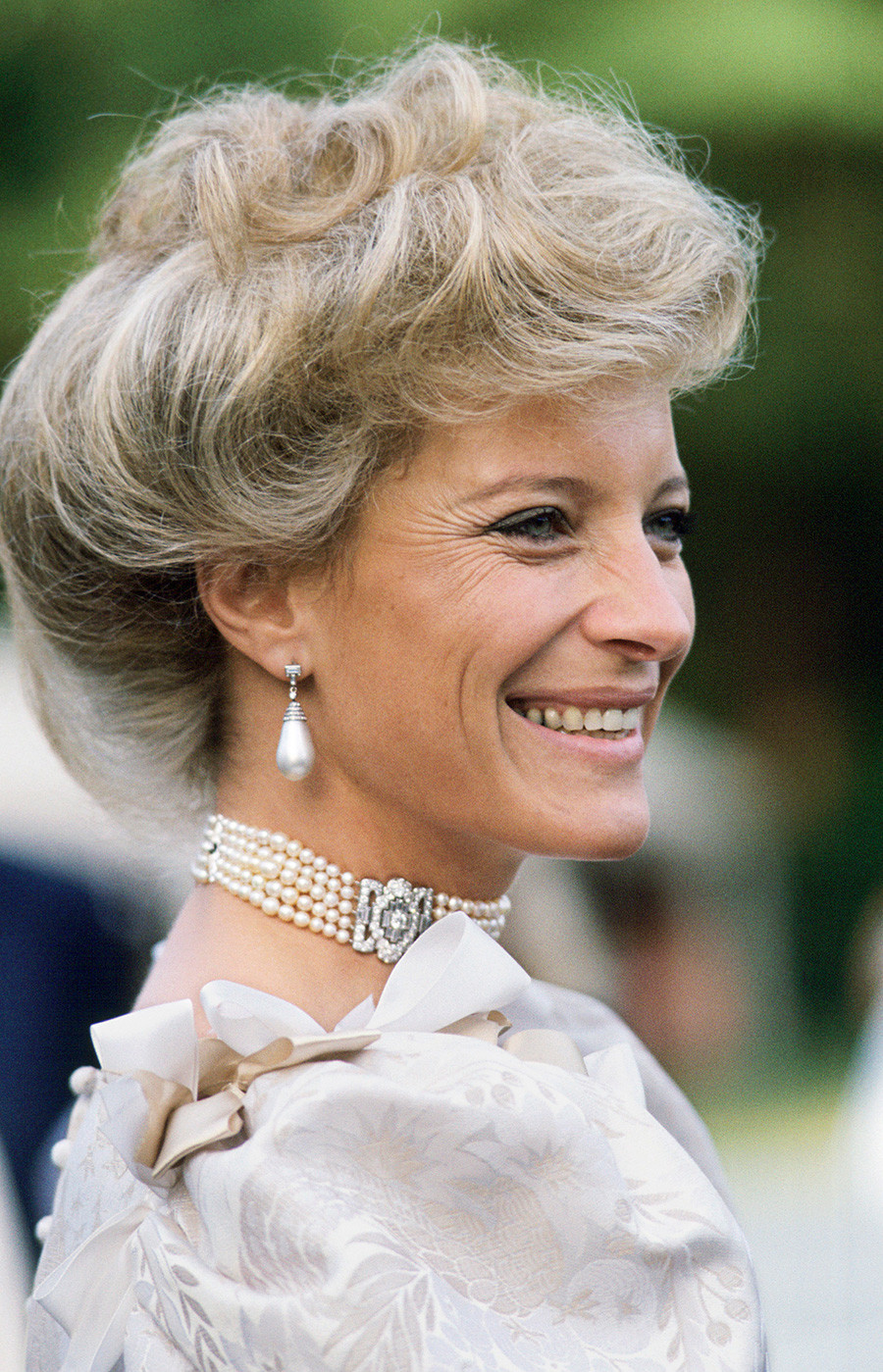 Princess Michael of Kent during a visit to Esher in Surrey.

The pearls can be worn both as earrings and as necklace pendants. 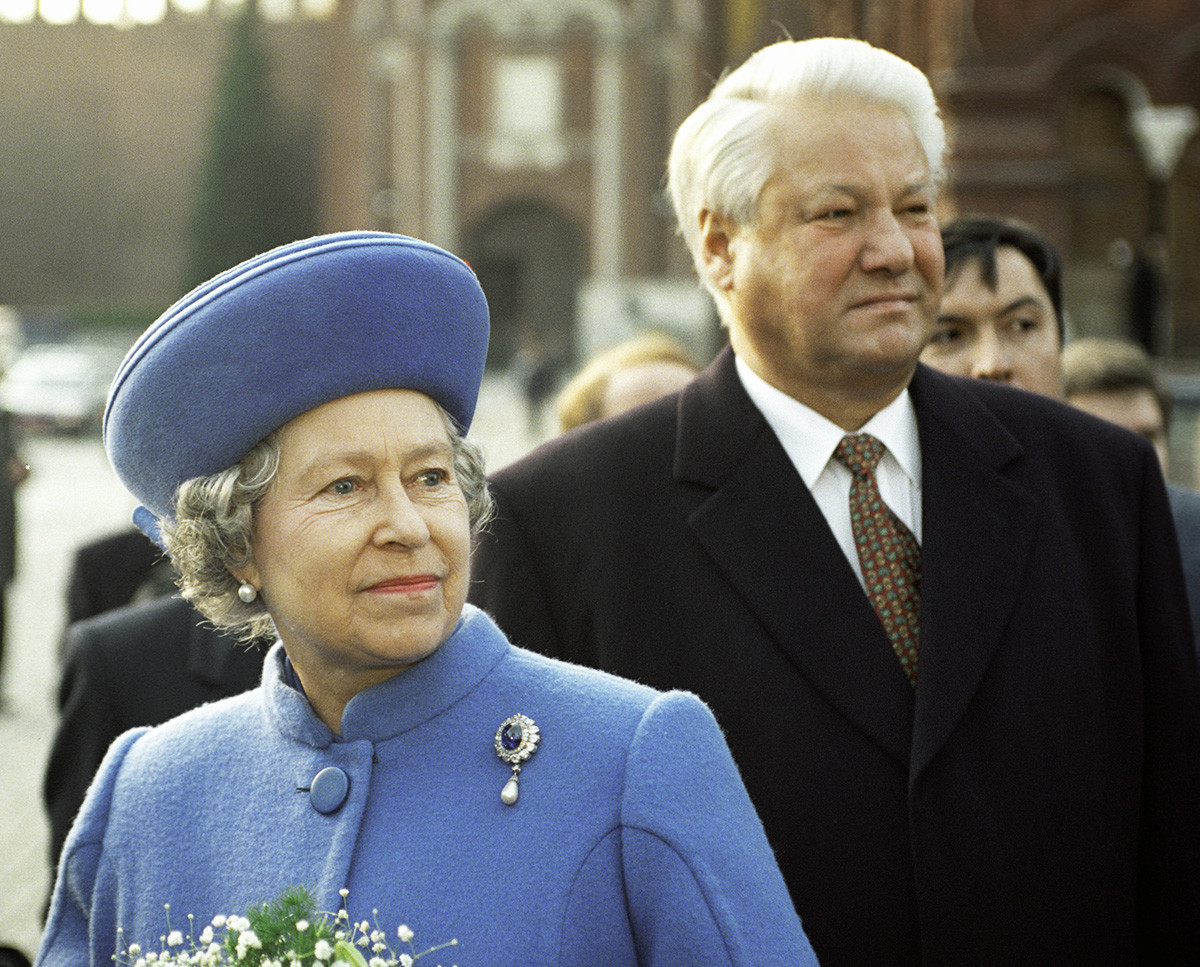 Queen Elizabeth II paid an official visit to Russia in 1994. For her meeting with President Boris Yeltsin, she chose to wear a bright blue coat adorned with a brooch featuring an enormous cabochon-cut Ceylon sapphire surrounded by dozens of diamonds and an elegant pearl pendant drop. 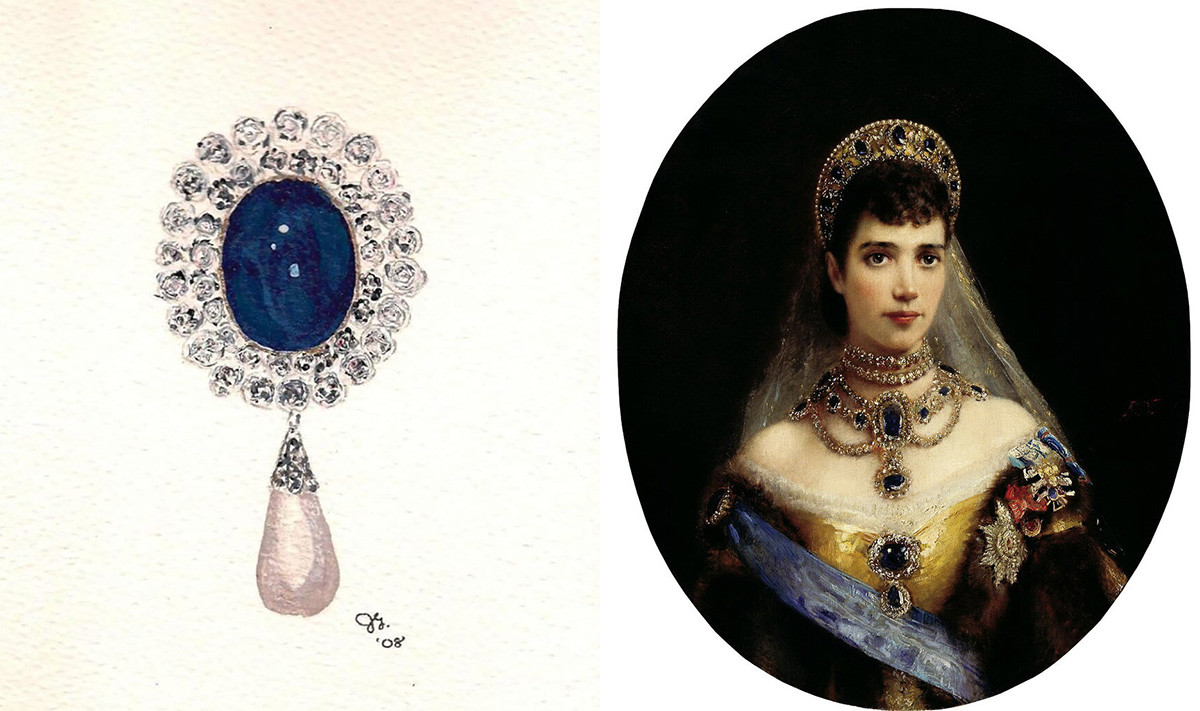 Sapphire Brooch and the Dowager Empress Marie Feodorovna of Russia. In this picture, the Russian Empress wears a sapphire kit that was sold separately after the revolution.

The brooch had initially belonged to Russian Empress Maria Feodorovna, spouse of Alexander III, mother of Nicholas II and sister of Alexandra of Denmark, Britain's Queen Consort (who initially started the fashion for "Russian style" tiaras). 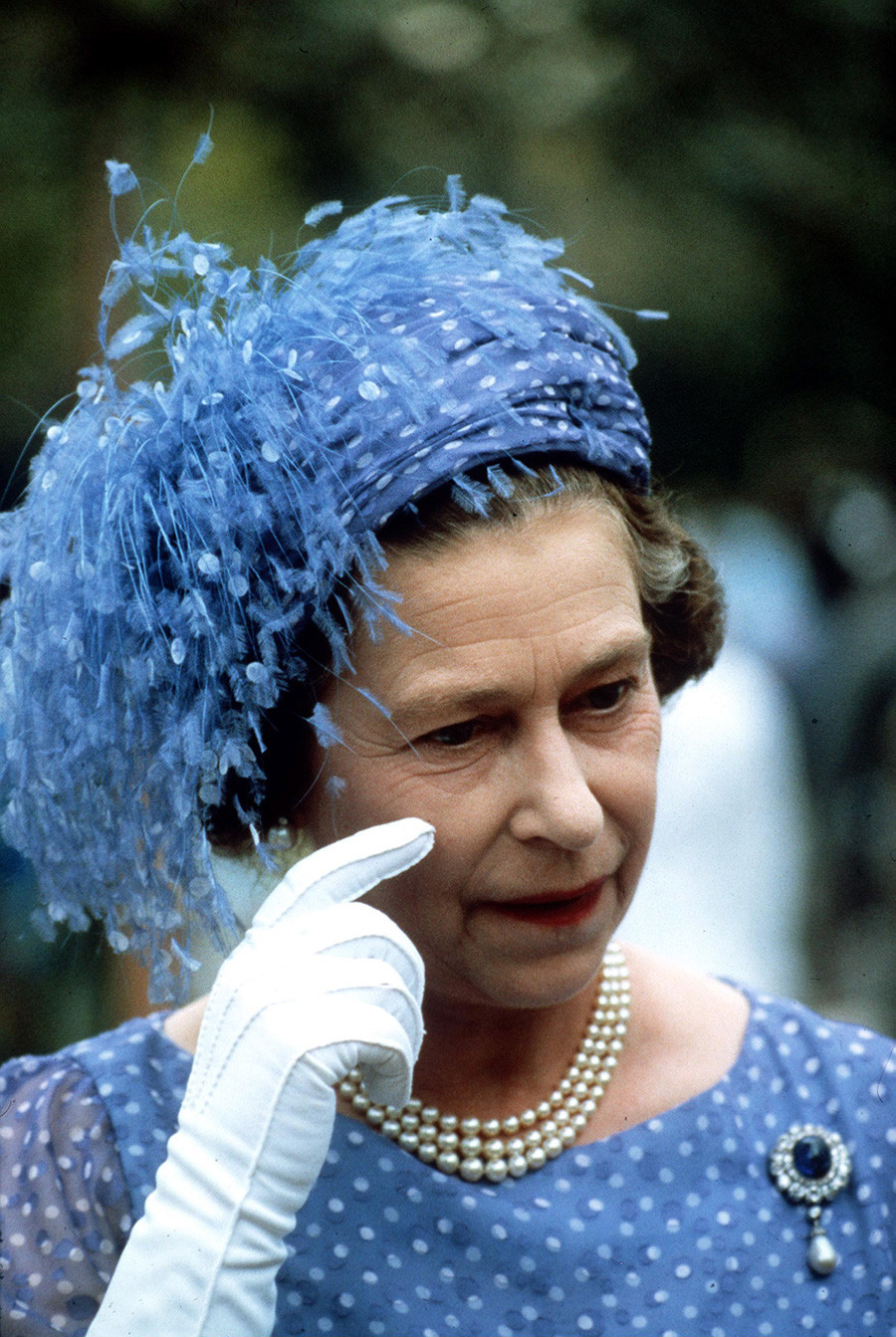 The queen in Honiara, Solomon Islands, 1982.

During the revolution, Maria Feodorovna managed to leave Russia via Crimea aboard a British battleship. She eventually reached Britain and then Denmark, where she lived until her death in 1928. Historians believe the widowed empress managed to smuggle the brooch and some of her other jewelry abroad. The brooch, which had been a wedding present from her sister, wound up back in Britain. 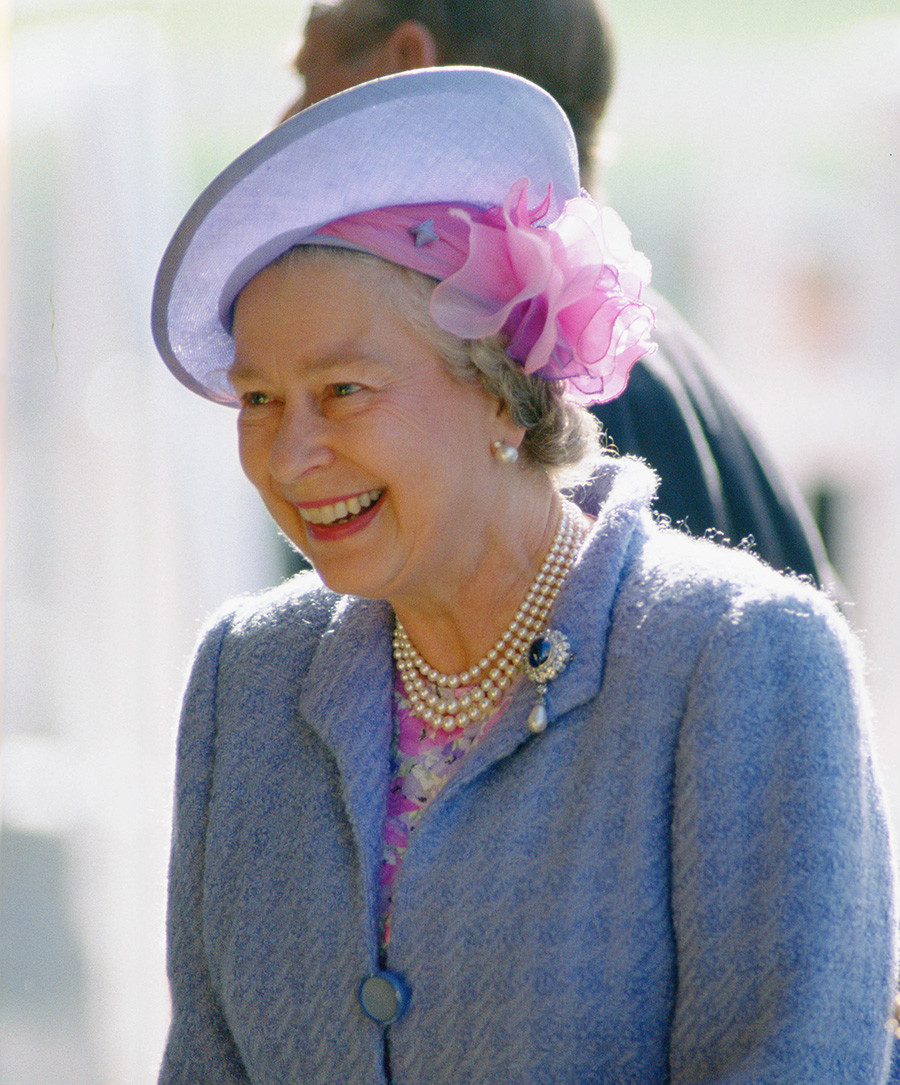 In 1930, Maria Feodorovna's daughters sold it to Alexandra's daughter-in-law, Mary of Teck, from whom it was passed on to Mary's granddaughter, Elizabeth II, in 1953. 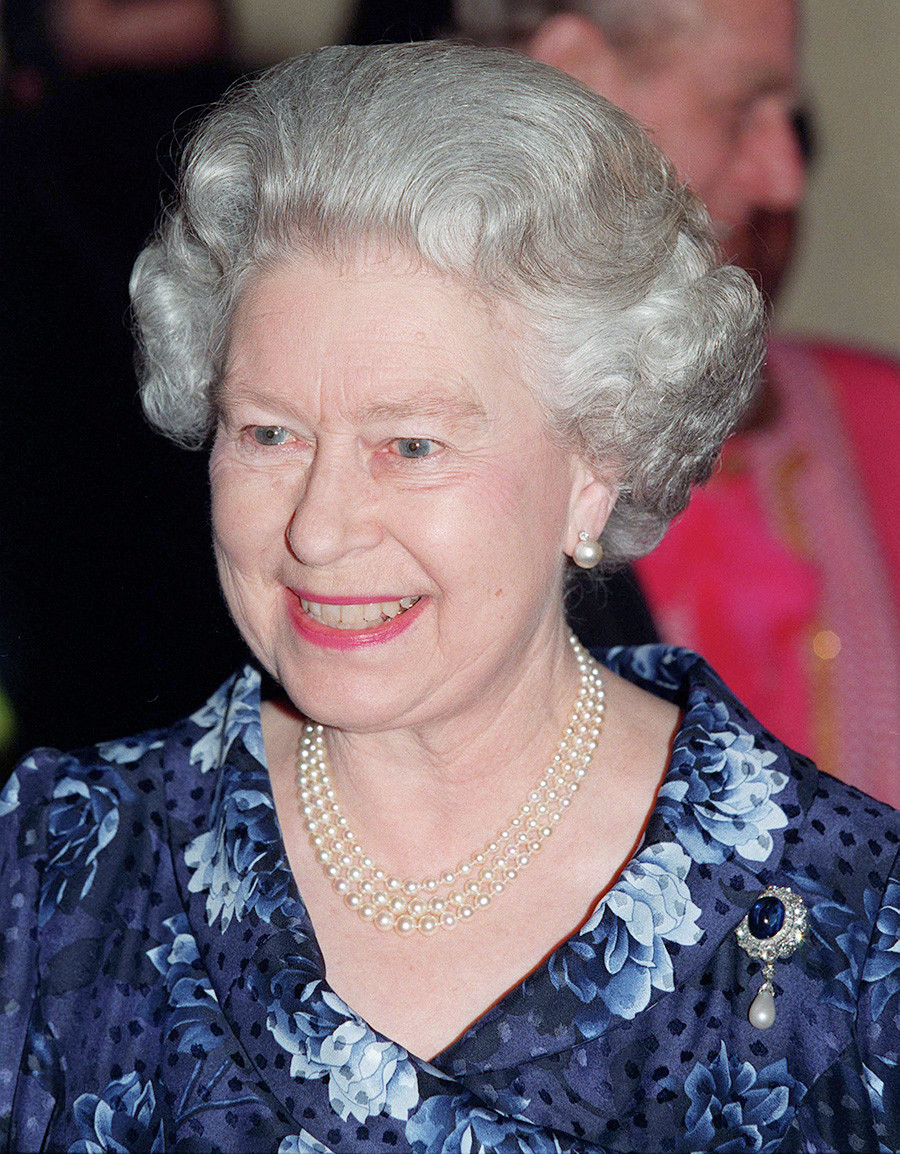 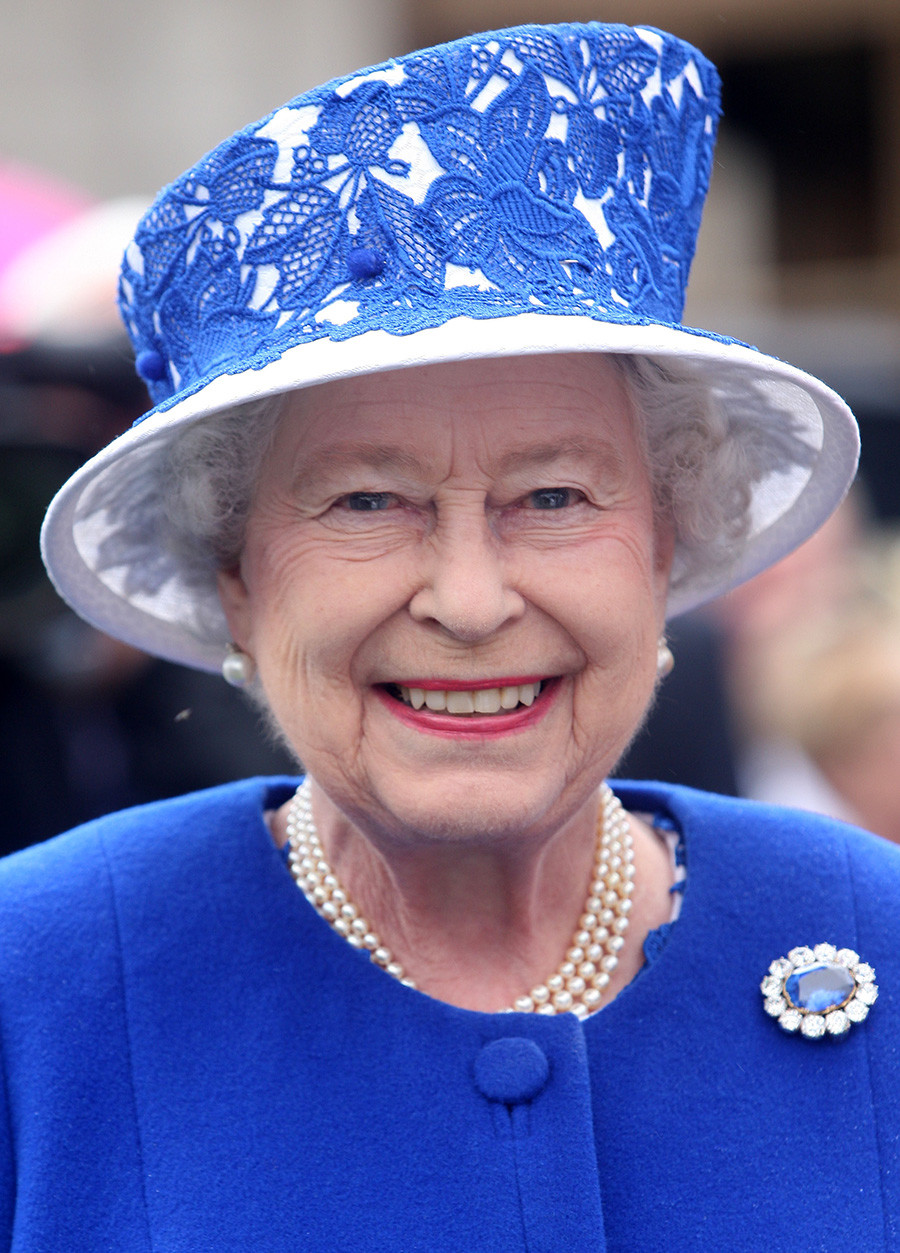 Maria Feodorovna was very fond of jewelry and sapphires in particular. She had an impressive collection of jewels that went under the hammer after she died. Mary of Teck, also a connoisseur of Russian jewelry, acquired a number of the pieces that to this day members of the royal family sometimes wear on outings. Elizabeth II's collection includes another sapphire brooch that used to belong to Maria Feodorovna. 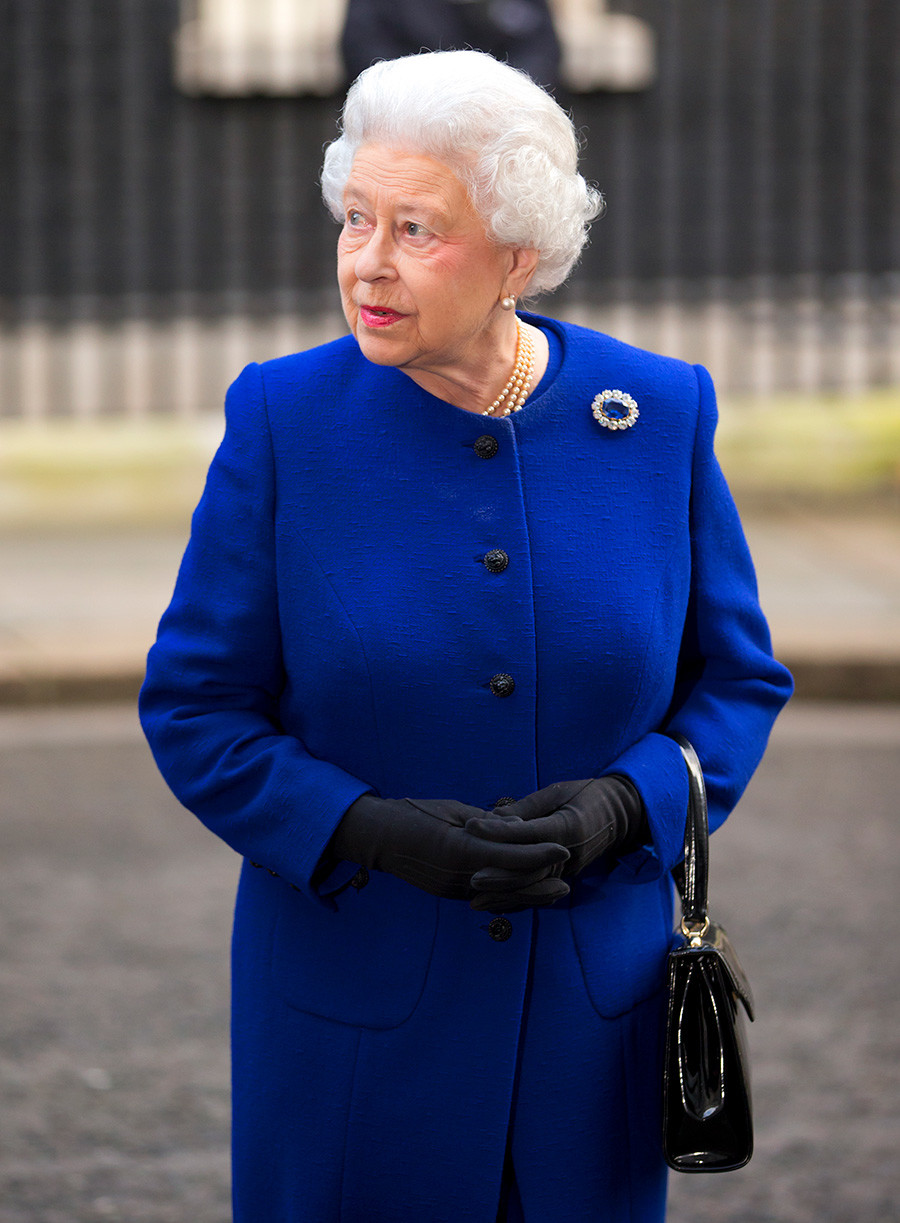 The empress had a whole sapphire parure, consisting of a tiara, two brooches, a necklace and a corsage adornment. The whole parure may also have been sold off in parts with the brooch ending up in the possession of the British Queen. Elizabeth II wears it quite frequently to complement a dress or coat. 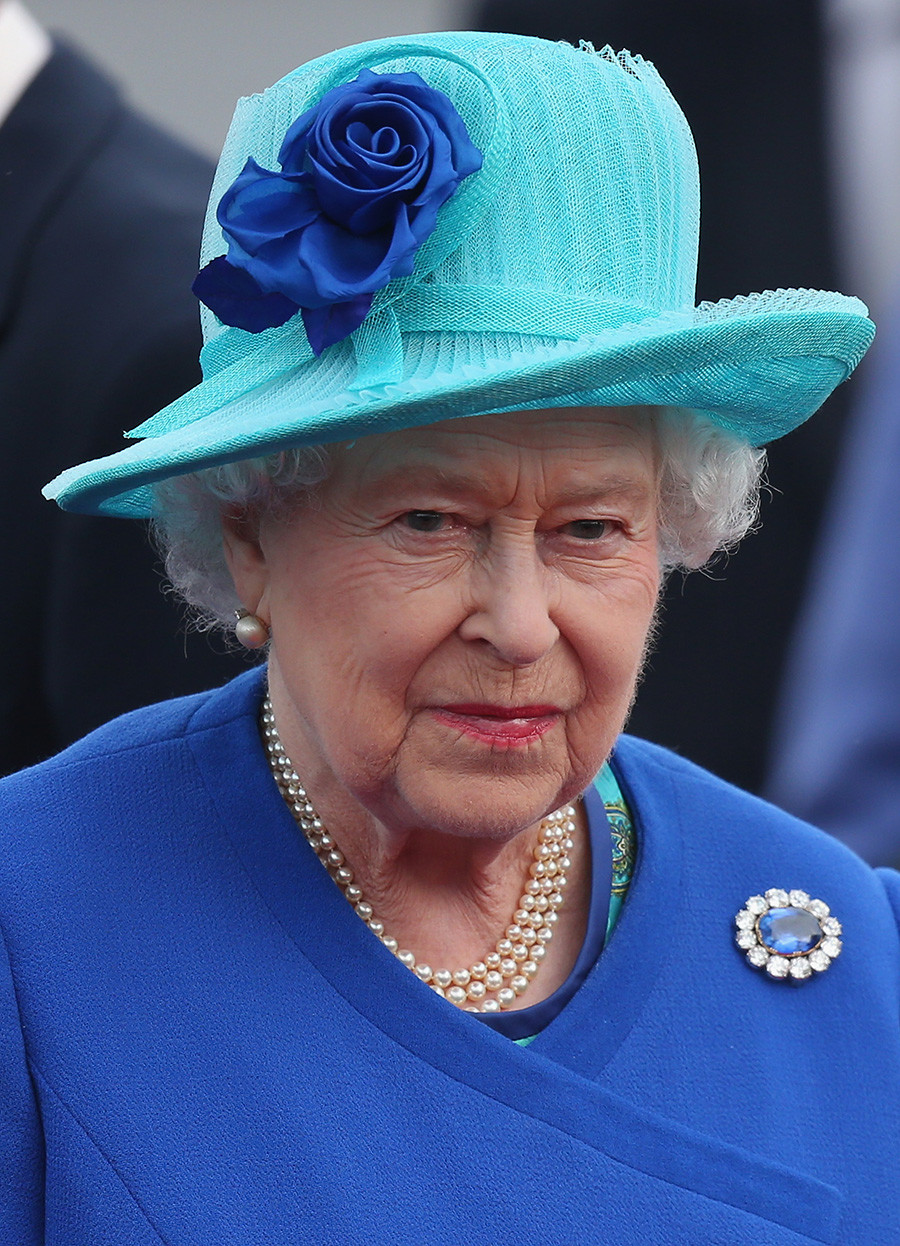 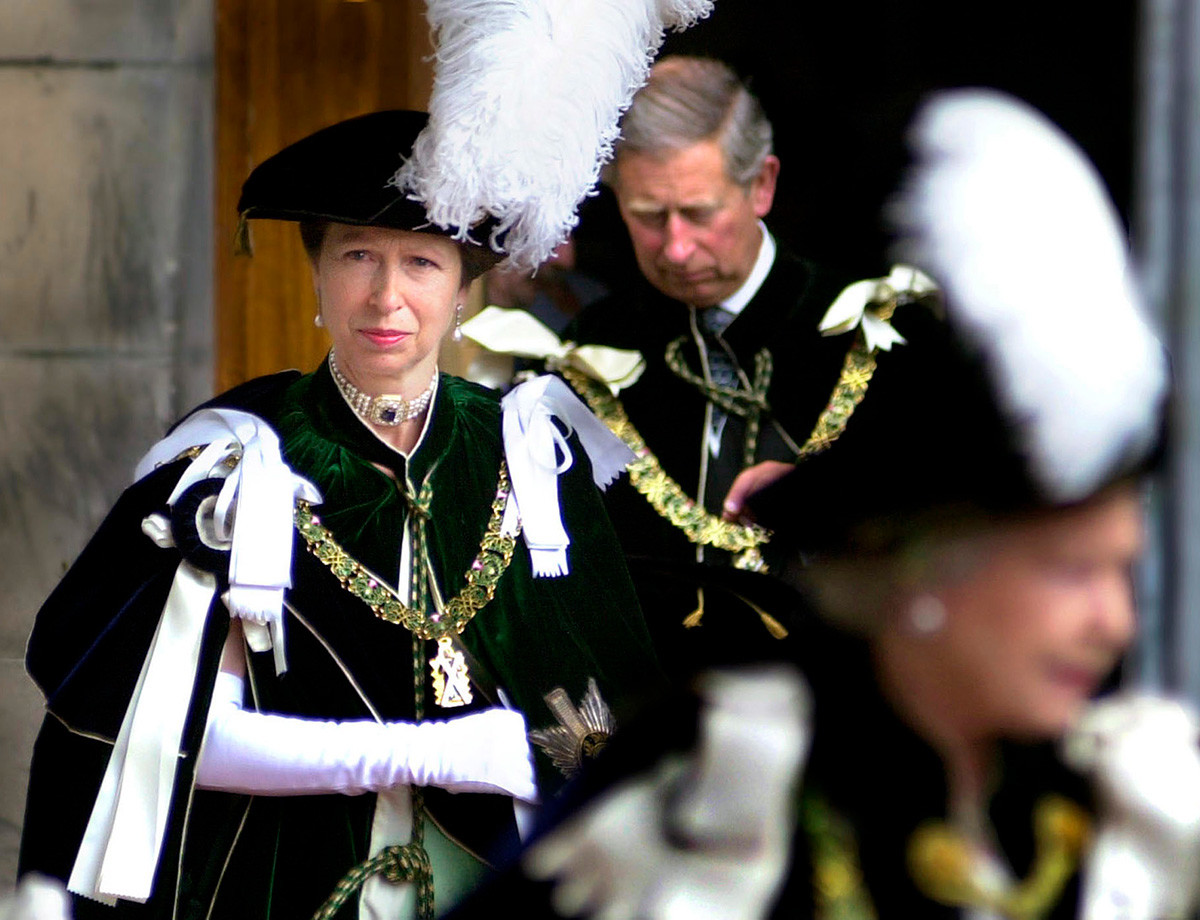 This is one of the favorite chokers of Princess Anne, daughter of Elizabeth II, and has an enormous sapphire. 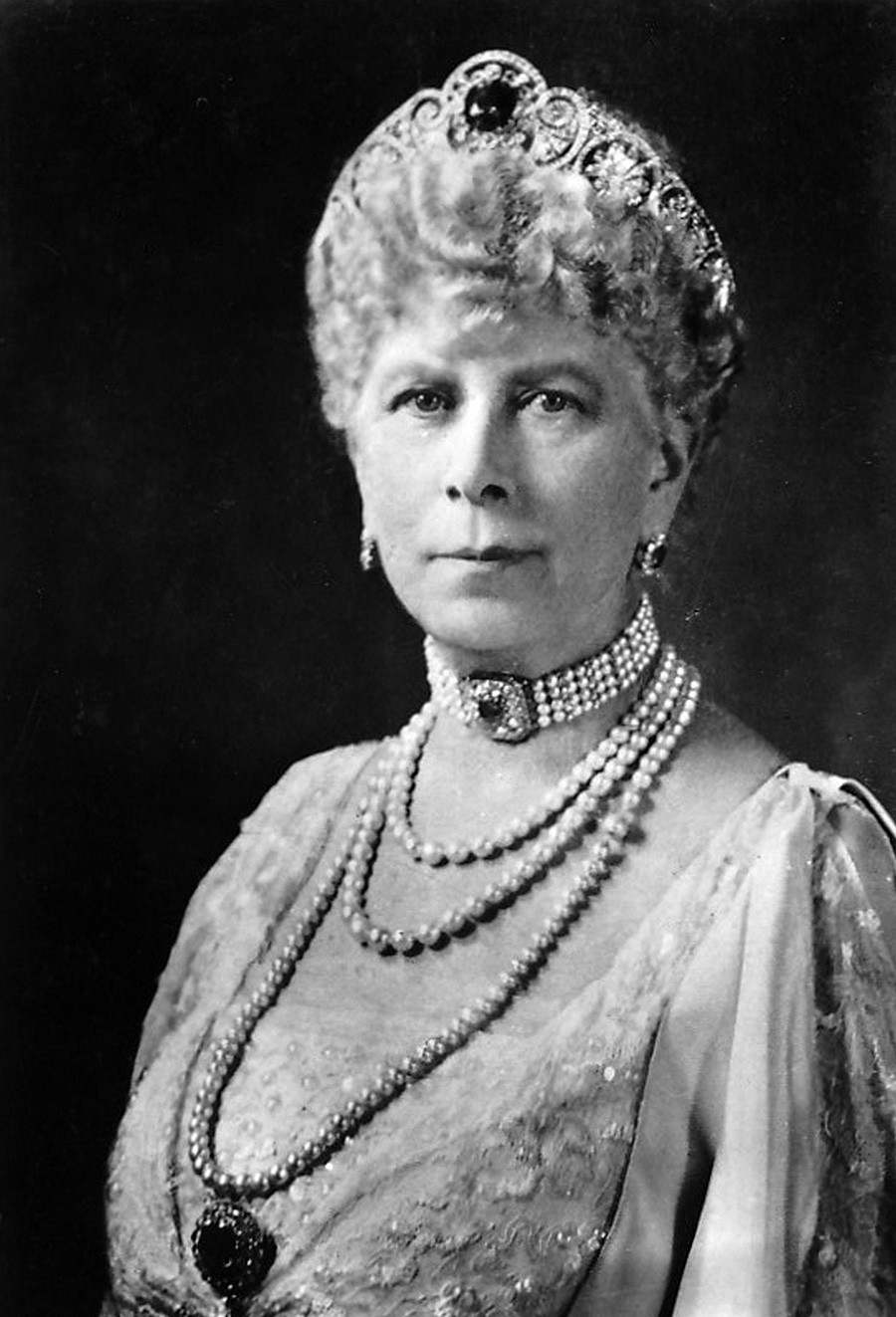 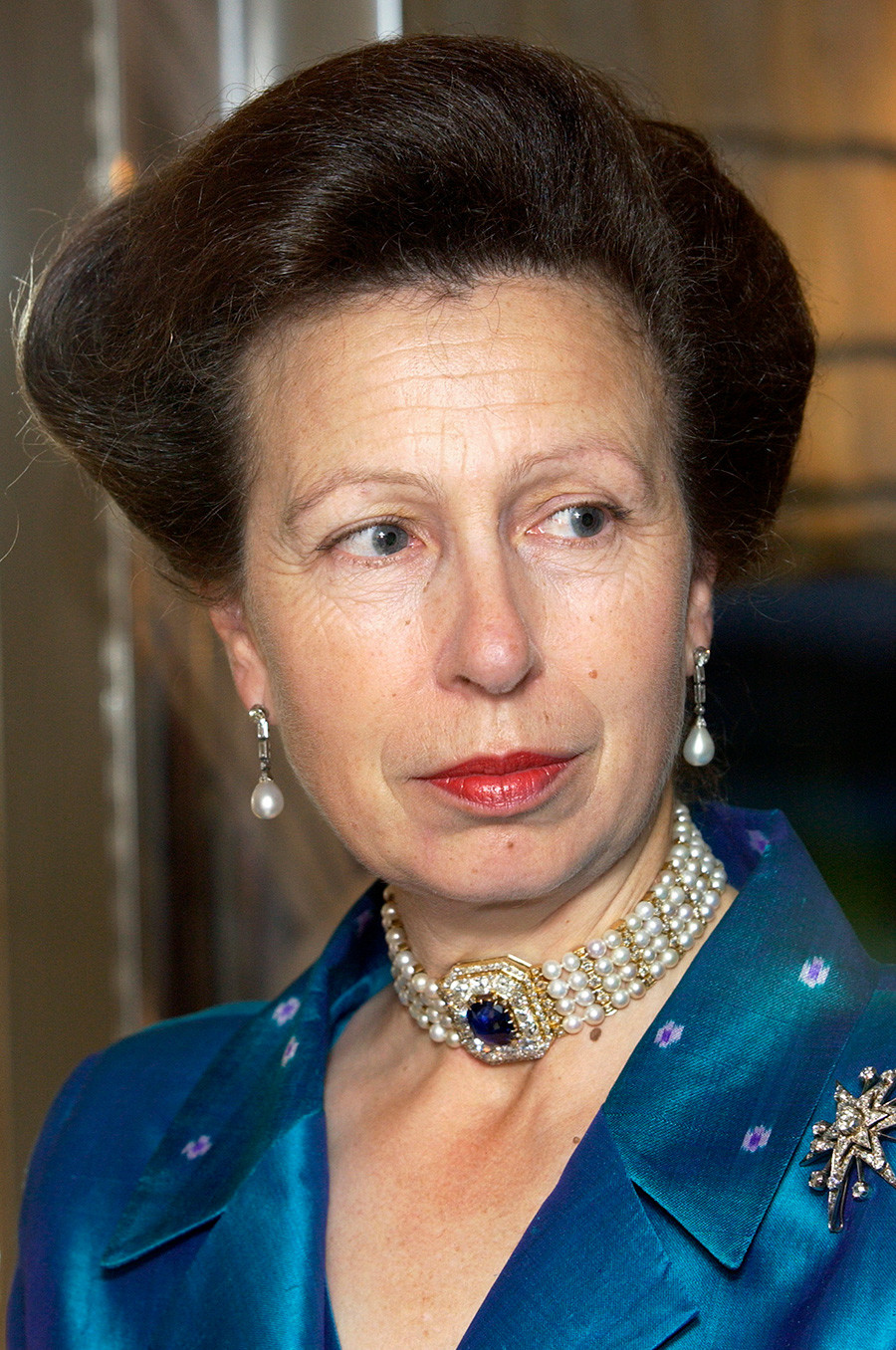 Princess Anne at the Royal Victoria Dock in East London, 2003.

With its large sapphire, diamonds, four rows of pearls and gold setting, it still looks very contemporary even today. 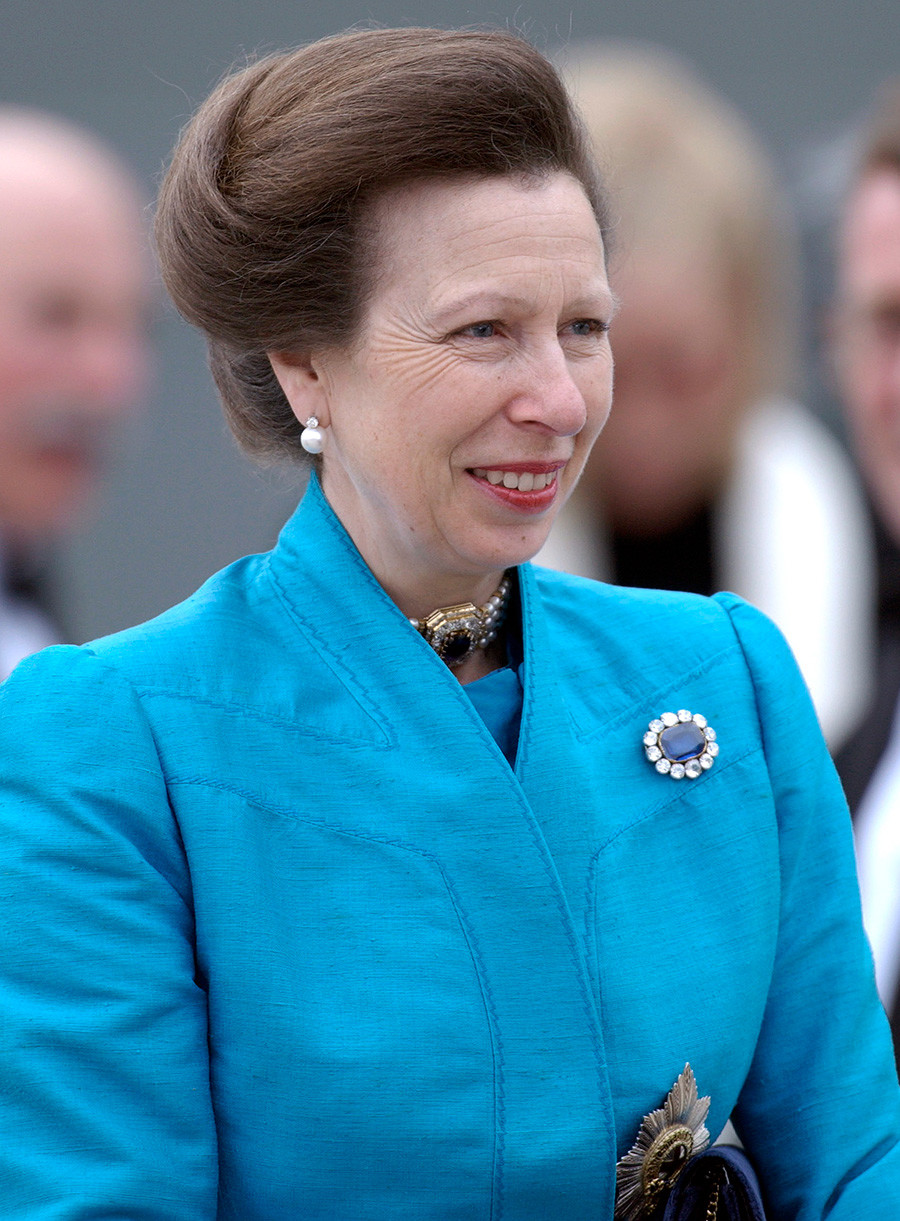 Princess Anne, The Princess Royal At The Quayside For The Naming Ceremony For Two New P & O (peninsular And Oriental Steamship Company) Ships, The Oceania And Adonia, 2003.

The British royal family’s jewels include precious items that were gifted by the Russian emperors. This diamond brooch with Ceylon sapphires, for instance, is worn by Camilla, the spouse of Prince Charles. 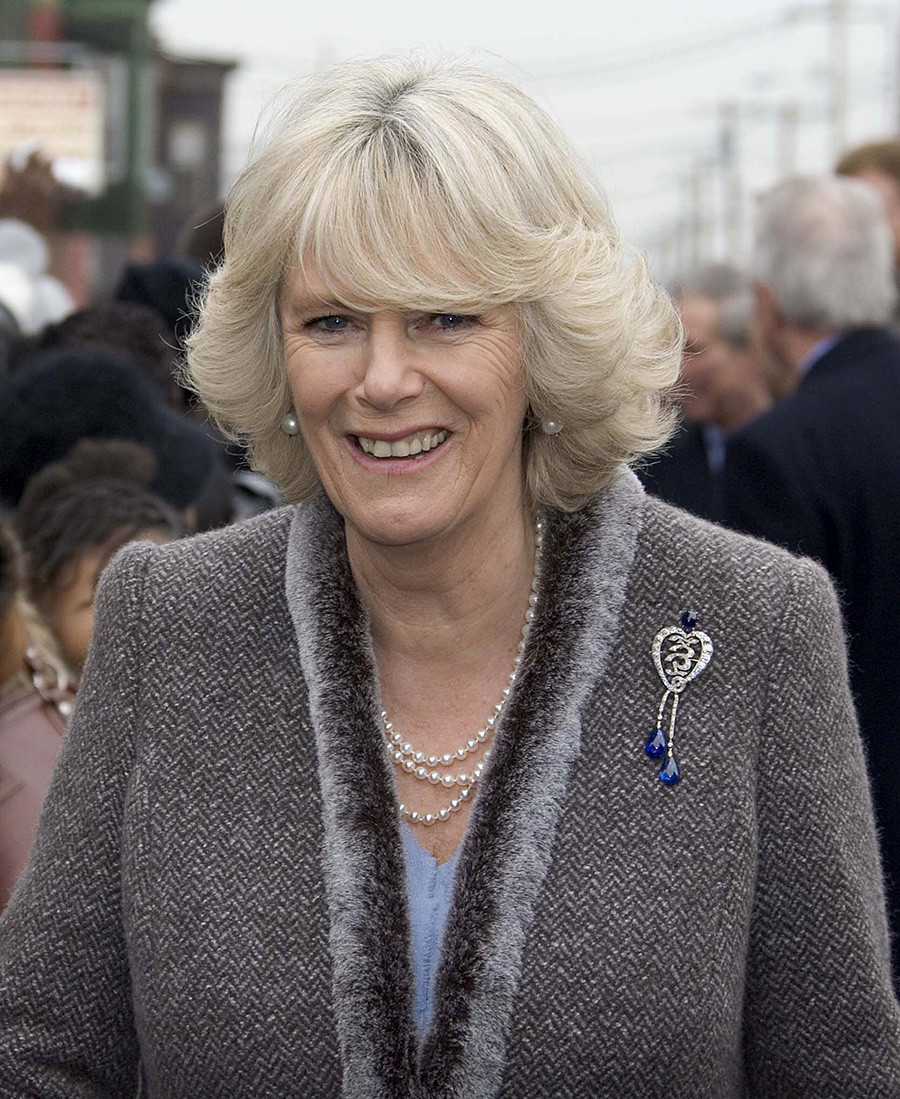 Camilla, Duchess of Cornwall is greeted by the public as she arrives to visit the Mural Arts Project at Heavenly Hall in Philadelphia on January 27, 2007.

It is made in the very original form of a heart with the letter “ksi” inside, denoting the number 60 in the early Cyrillic alphabet. It was presented to Queen Victoria in 1897 in honor of the 60th anniversary of her accession to the throne by her Hesse grandchildren, who included the last Empress of Russia, Alexandra Feodorovna, and her sister, Grand Duchess Elizabeth Feodorovna. 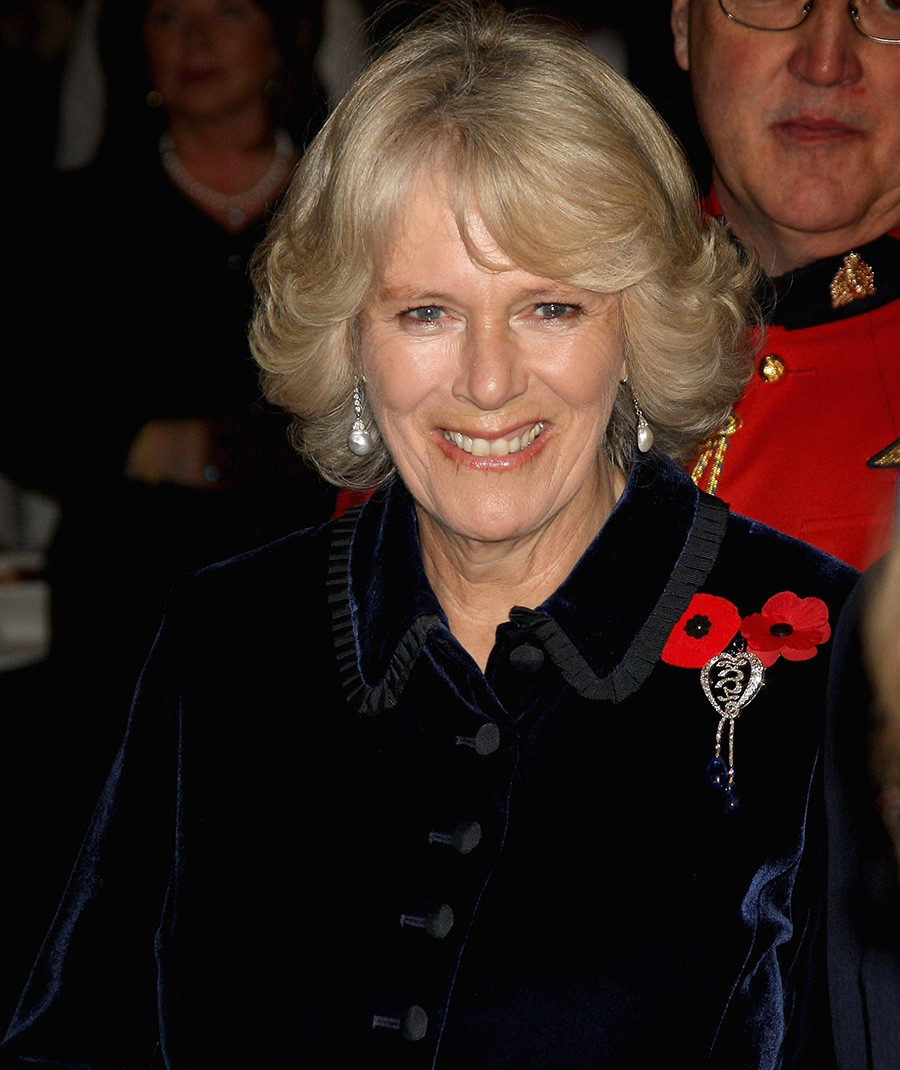 Camilla, Duchess of Cornwall smiles during a reception at 'The Rooms' on November 3, 2009, in Saint John's, Newfoundland, Canada.

The brooch was not seen in public for many years, but Camilla, Duchess of Cornwall, began wearing it in 2007 and continues to do so to this day. 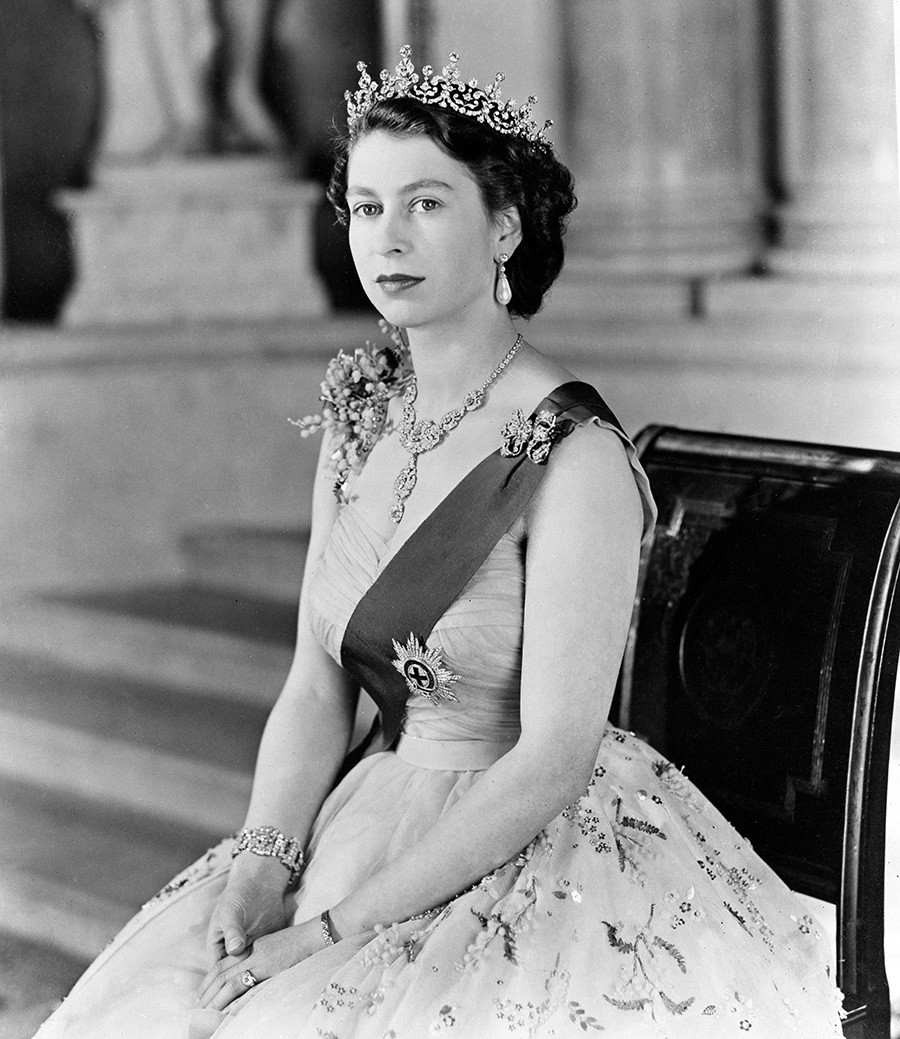 Queen Elizabeth II in the Grand entrance at Buckingham Palace. 1954.

Elizabeth married Philip Mountbatten in 1947. As a wedding present, his mother, Princess Alice of Battenberg (great-granddaughter of Queen Victoria and niece of Empress Alexandra Feodorovna), gave her son a diamond tiara that had been presented to her by Nicholas II and Alexandra for her wedding in 1903. This was during the difficult post-war years when even royal families occasionally had to make financial concessions, and so the tiara was broken up. 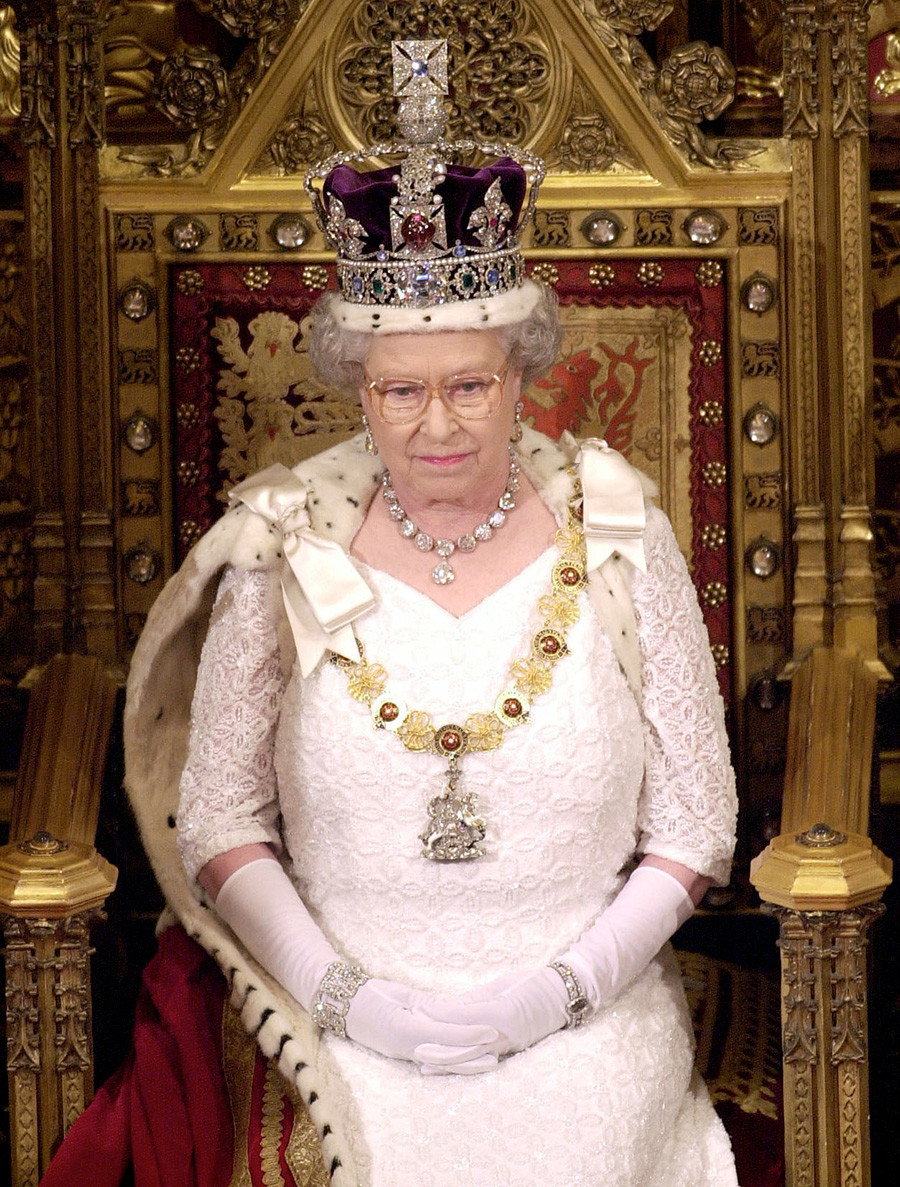 The queen at the Parliament In London.

The largest of the diamonds was used to make an engagement ring, while the other stones were set in a platinum bracelet that Philip gave to Elizabeth. She wears it to this day, occasionally lending it to Catherine, Duchess of Cambridge, the wife of her grandson, William. 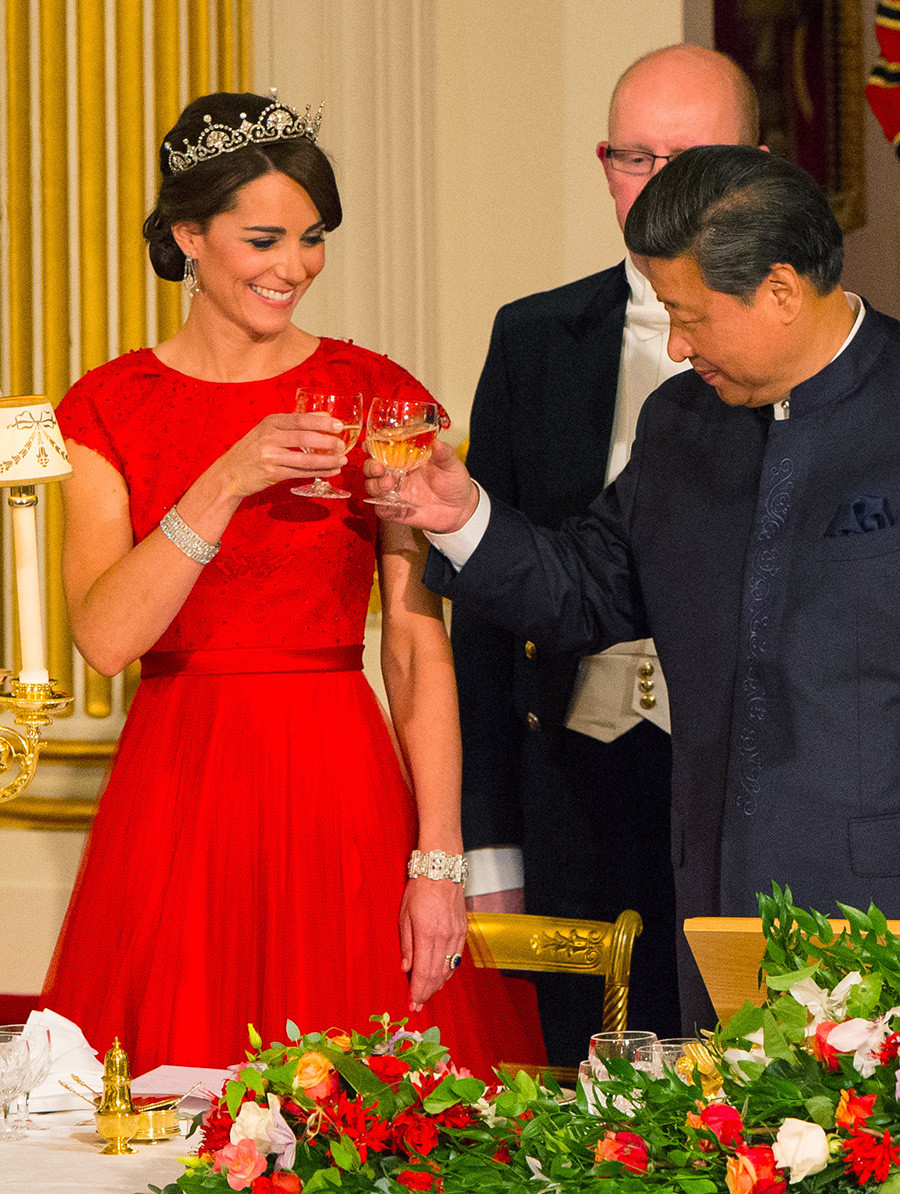 Chinese President Xi Jinping and Catherine, Duchess of Cambridge attend a state banquet at Buckingham Palace on October 20, 2015 in London.