Which Romanov family jewels are stored in the Kremlin's Diamond Fund? 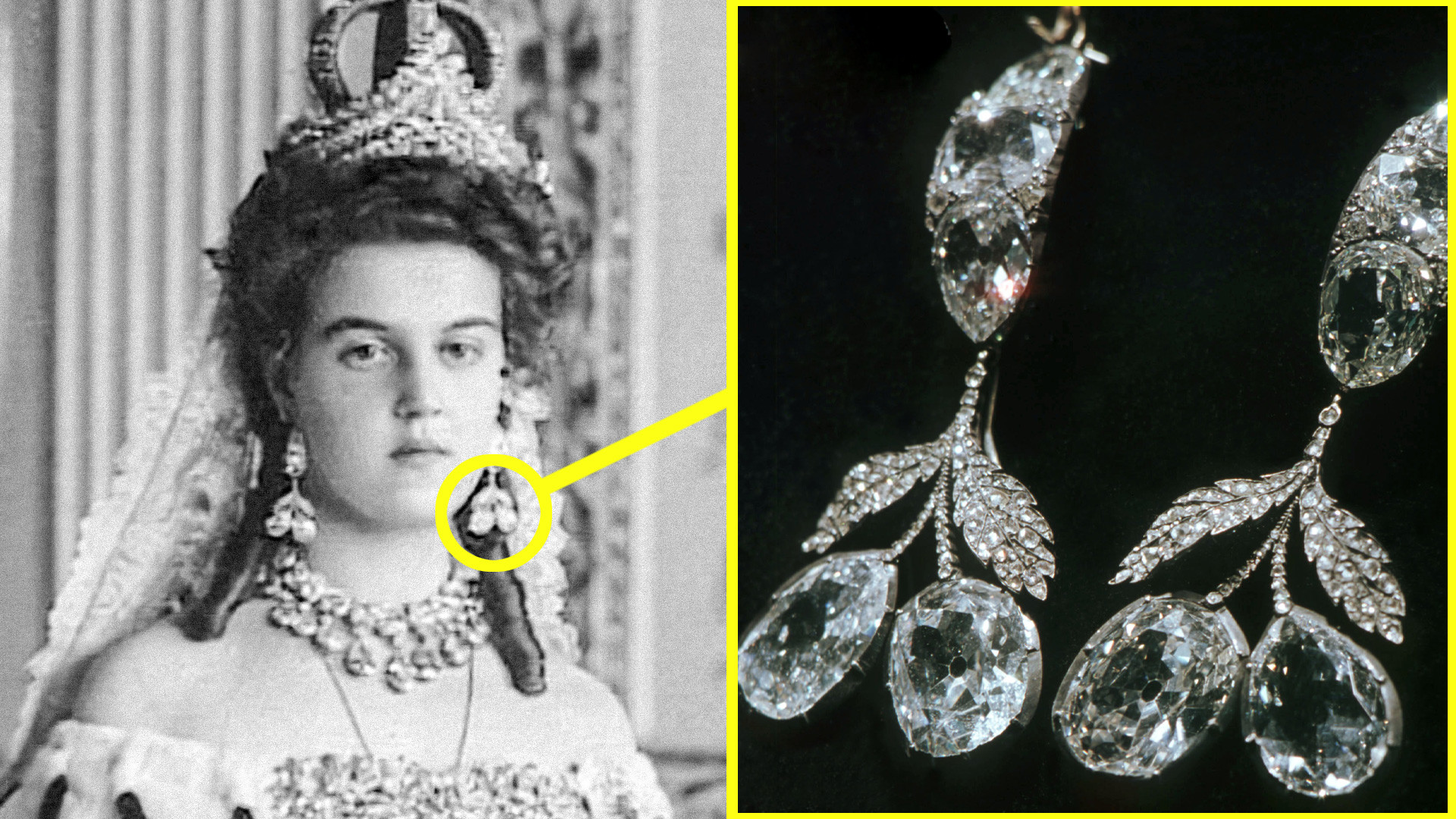 Maria Pavlovna wearing the Cherry earrings and the diadem with pink diamond. Now both these items are kept in Moscow's Diamond Fund. The wedding crown was sold abroad.

Legion Media; Valery Gende-Rote/TASS
Most of the imperial jewels were either taken out of the country or sold at auctions after the Bolshevik Revolution, but some of them can still be seen on display in Moscow.

We do not know exactly how large the Romanov family's jewelry collection was since all the information we have comes from the fraction of it that fell into the Bolsheviks' hands after the 1917 revolution. And even those items did not resurface straight away. The royal treasures were usually kept in the diamond room of the Winter Palace in St. Petersburg, but during World War I the Romanovs' crown jewels were sent to the Kremlin Armory for safekeeping. They remained there, buried under other boxes, until the Bolsheviks rediscovered them in 1922.

The young Soviet Union was desperately short of cash, and so the government decided to sell the jewelry abroad, holding onto only the most valuable items to be turned into museum exhibits later. Among these items are elegant brooches that belonged to Catherine the Great, an unusually rare portrait cut diamond and the only Romanov diadem that remains in Russia.

1. The Fountain brooch and earrings of Elizaveta Petrovna 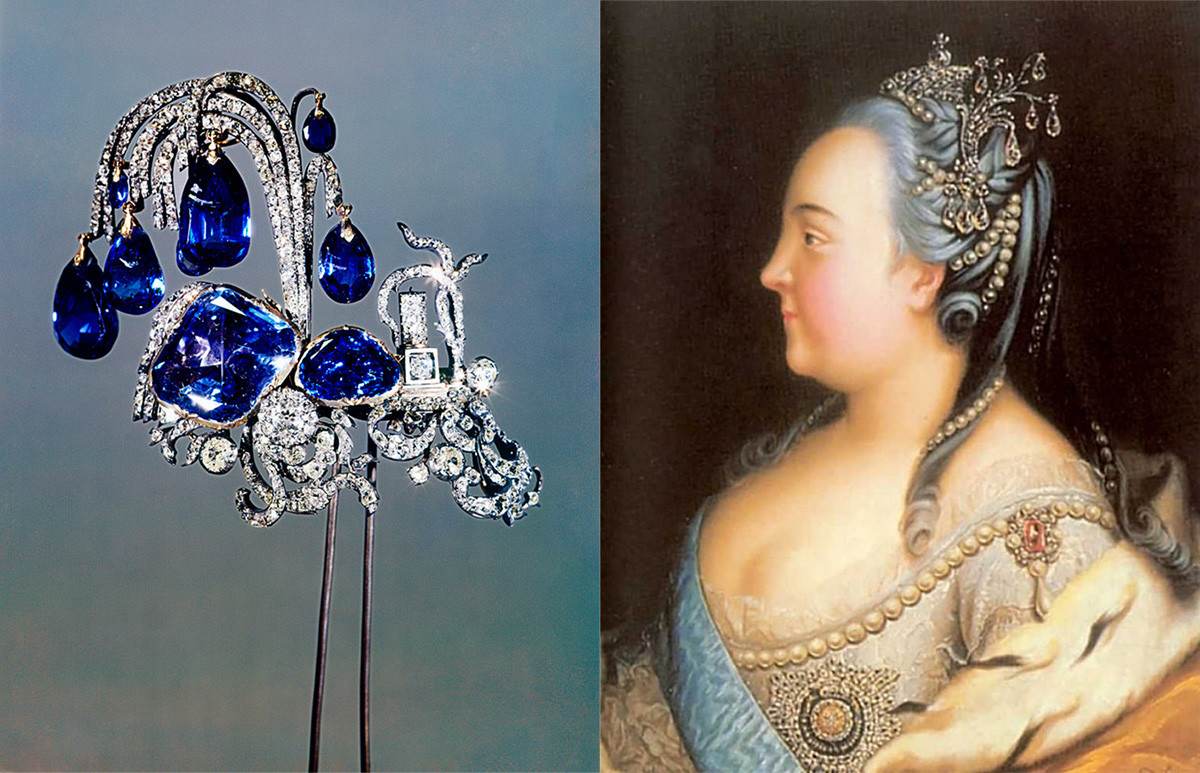 The Fountain aigrette worn by Elizaveta Petrovna and her descendantsю

Elizaveta Petrovna (1709-1761), the daughter of Peter the Great, loved brooches and had many of them made for her in a variety of styles and fashions. This piece in the form of a fountain of sapphires with diamond drops is called an aigrette and was worn on a hat or as a hair clip. The aigrette comes in a set with massive Fountain earrings. They looked particularly striking in motion.

2. The Grand Bouquet and the Small Bouquet brooches 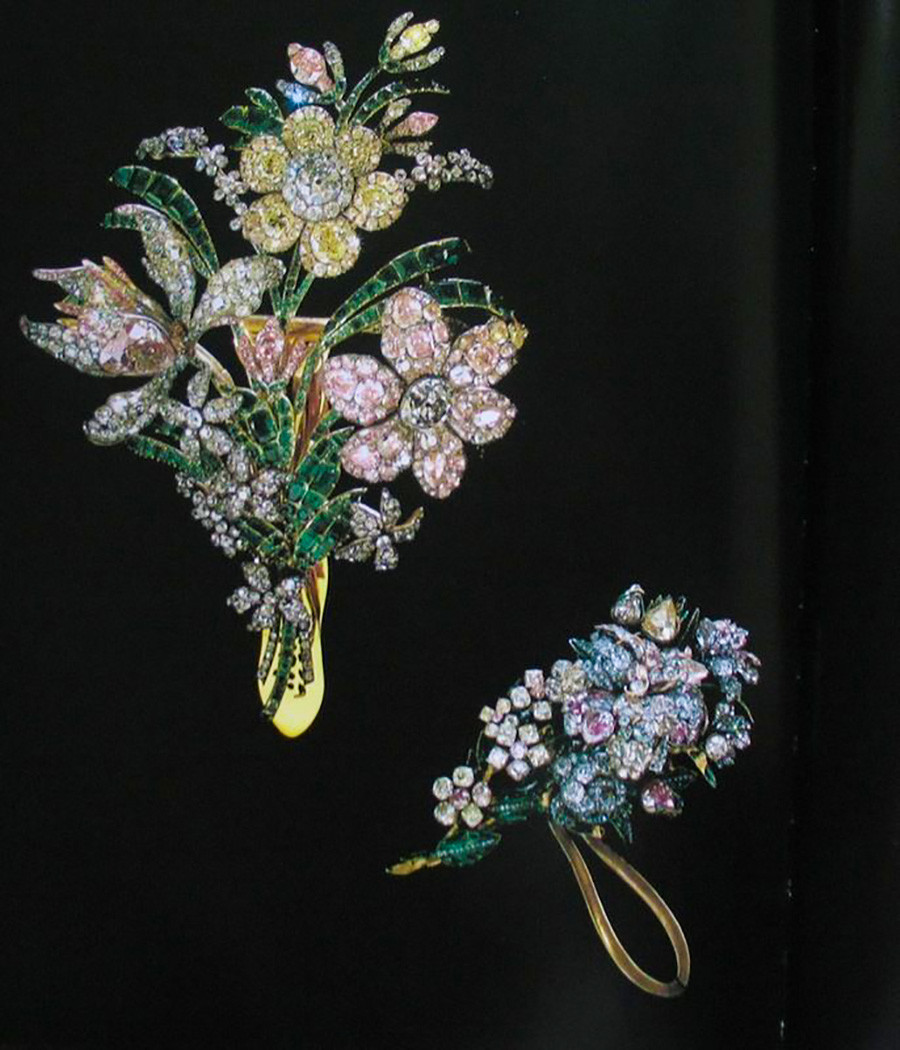 Elizaveta Petrovna wore these two items on her ceremonial dress. At the time, it was common for jewelry to have set precious stones on multi-colored foil plates to add more color. With these, the court jeweler, Jeremie Pauzie, achieved the desired effect to absolute perfection! Brazilian diamonds and Colombian emeralds make up the precious flowers of irises, daffodils and forget-me-nots. In the center of the Grand Bouquet there is a rare 15.5-carat lilac diamond.

The Small Bouquet consists of diamond flowers and leaves made of gold and dark green enamel. 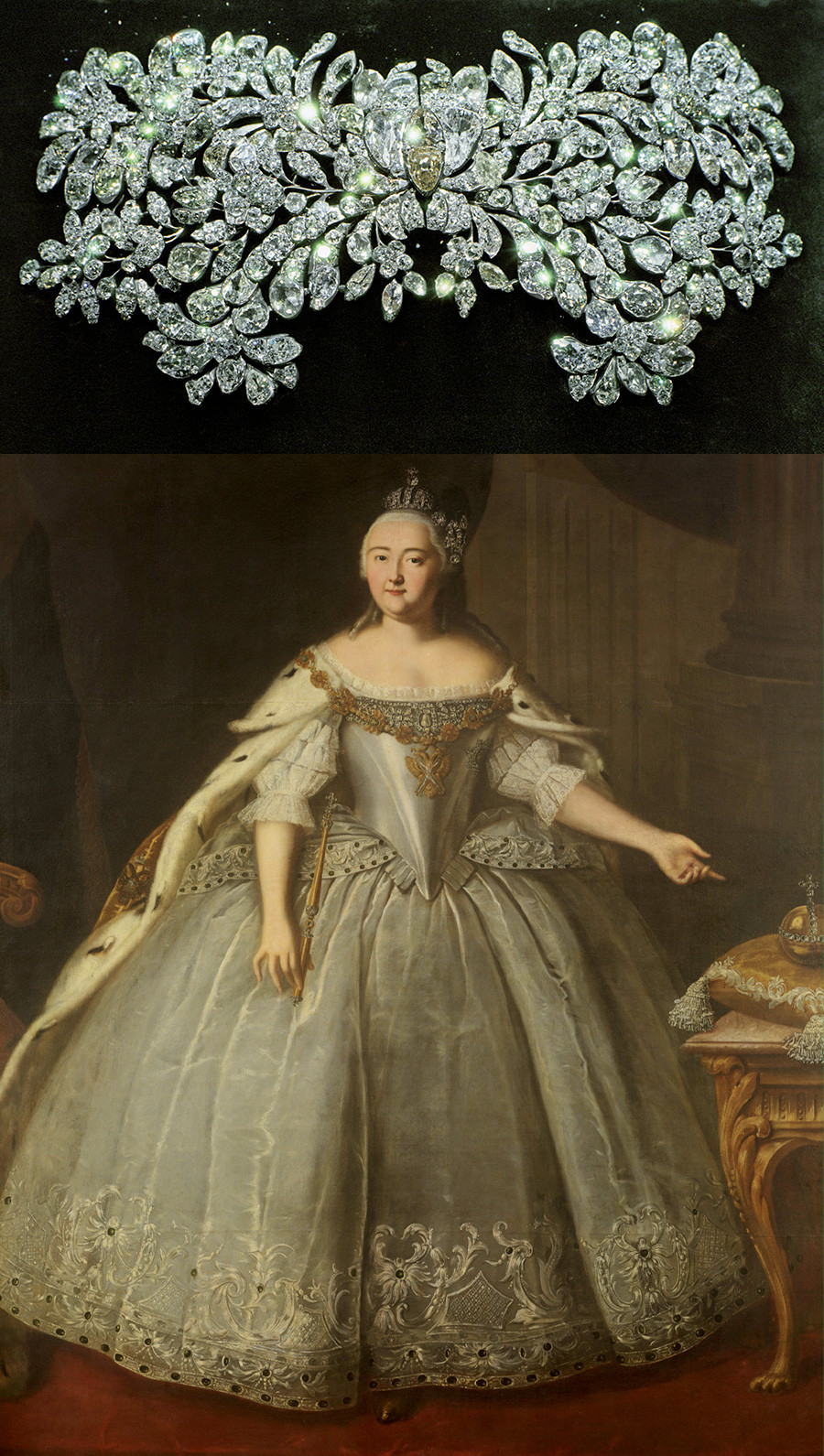 An agraffe is a brooch-like clasp that was popular in the 17th century. Elizaveta Petrovna wore this huge diamond bow-shaped clasp on her ermine robe. Its size alone is impressive: The brooch is 25 cm long and 11 cm wide. The agraffe is decorated with 805 diamonds of various shapes and cuts. This piece of jewelry was worn by almost all descendants of the empress. 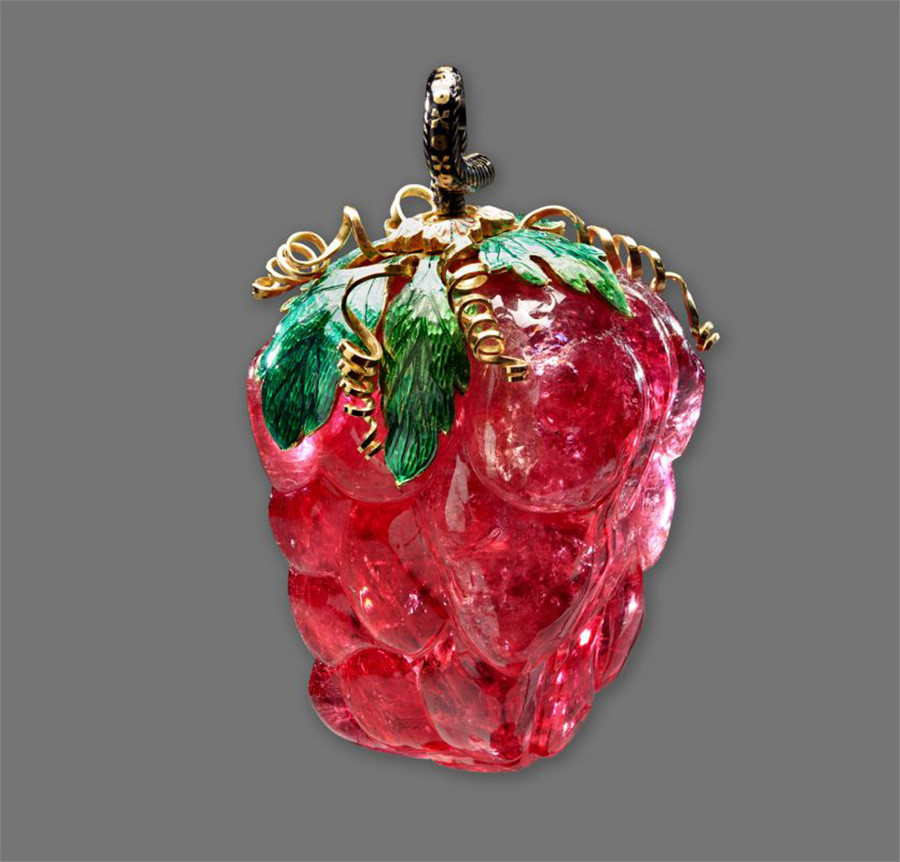 This large crimson stone is called a rubellite. It is a rare variety of dark pink tourmaline, which for a long time was considered to be a ruby (the gem was reassessed by experts only in Soviet times). In 1777, the stone was presented as a gift to Catherine the Great (1729-1796) by King Gustav III of Sweden to mark the 15th anniversary of her reign. He told the Russian empress a legend that the gem had originally been given as a present to Caesar from Cleopatra. It was later established that the stone had actually been brought to Europe from Burma in the 16th century and was considered to be the largest ruby on the continent at the time. Catherine did not want to spoil it by cutting it, so the court jewelers simply polished it and decorated it with enamel leaves. The result was a stunning pendant. 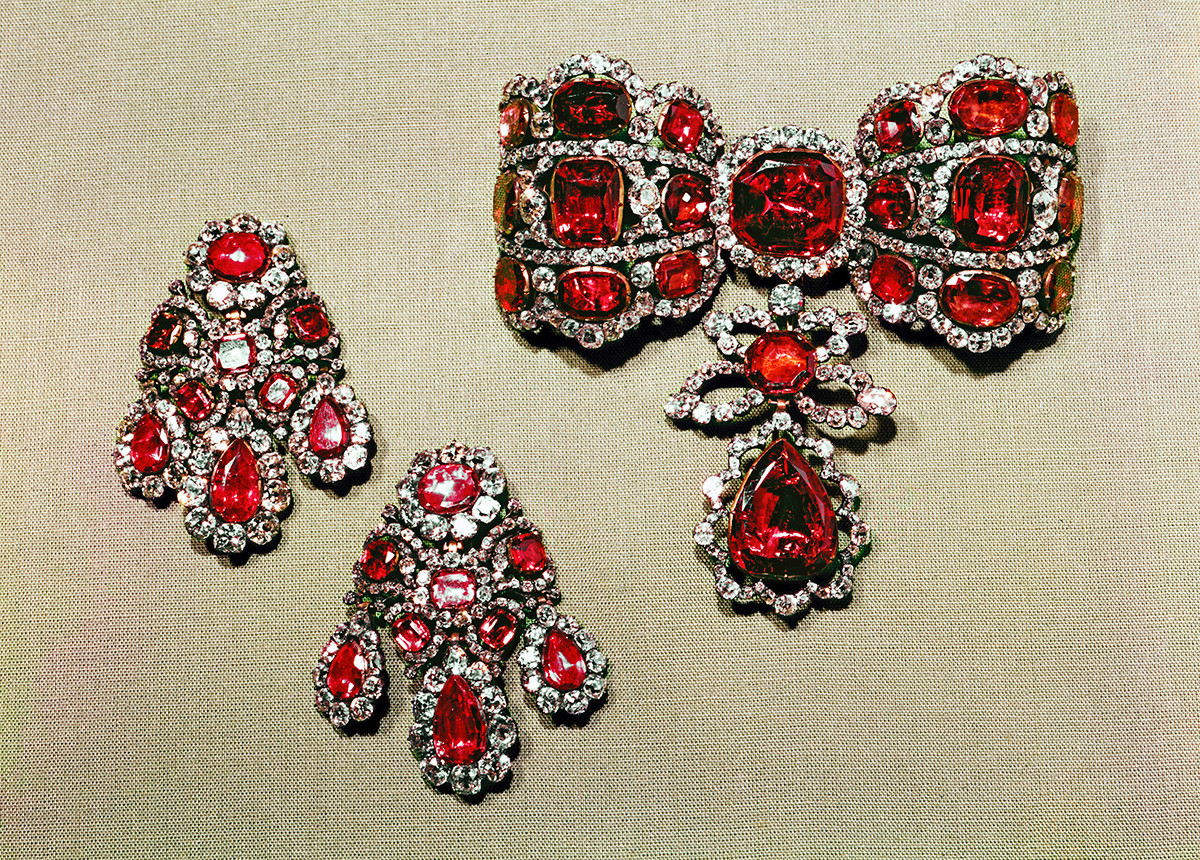 An esclavage is a piece of jewelry that was worn on a wide lace or velvet ribbon like a necklace. This bow was made for Catherine II in the latest fashion of the time. It is decorated with a scattering of diamonds and spinels, rare minerals of red and pink shades. It is paired with massive girandole earrings—as candelabra-shaped earrings were called then. The gems appear particularly bright thanks to the use of the same foil technique as in the bouquet brooches above. In fact, their natural color is much softer. At the back of the bow there is the jeweler's stamp reading “Pfisterer 10 Apr. 1764,” while the earrings are dated May 27 of the same year. The last owner of this set was Empress Maria Feodorovna (1847-1928), the wife of Alexander III. It was found in her chambers in the Anichkov Palace in St. Petersburg after she herself managed to escape Russia following the revolution. 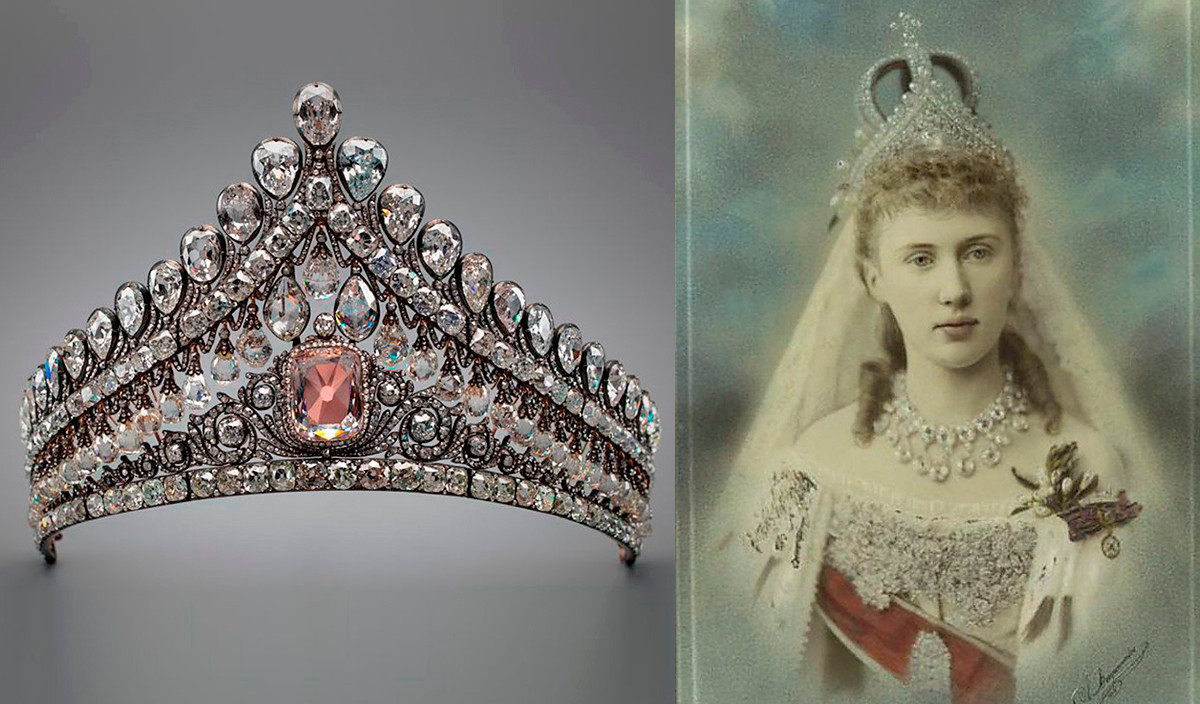 Grand Duchess Elizabeth Mavrikievna in this tiara during her wedding, 1884.

This stunningly beautiful diadem which belonged to Empress Maria Feodorovna (1759-1828), the wife of Paul I, was made in the early 19th century in the shape of a kokoshnik with a huge pink diamond in its center. At the time, kokoshnik tiaras were incredibly popular not only in Russia, but also abroad (European monarchs still wear them).

The tiara is decorated with 175 large Indian diamonds and over 1,200 small round cut diamonds. Traditionally part of the wedding dress for royal brides, it is the only original Romanov diadem that remains in Russia since experts considered the pink diamond to be truly priceless. 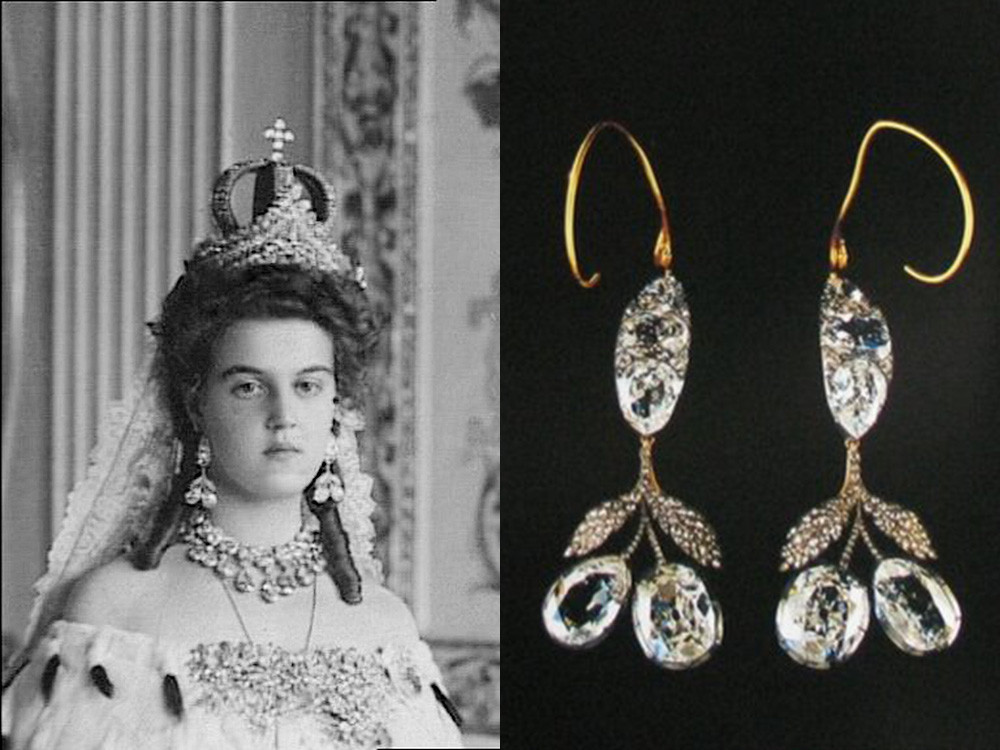 Maria Pavlovna wearing the Cherry earrings on her wedding day.

Along with Maria Feodorovna's tiara, these diamond earrings—originally made for Catherine II—formed part of the wedding dress for imperial family brides.

“The earrings were so heavy that in the middle of the banquet I took them off and, much to the emperor's amusement, hung them on the edge of the glass of water standing in front of me,” Maria Pavlovna (1890-1958) recalled of her wedding day.

A 136-carat emerald called The Green Queen is considered one of the most valuable items in the Diamond Fund collection. According to experts, it was found in the 16th century in Colombia and placed in a setting of small and large diamonds of various shapes in the middle of the 19th century. This piece of jewelry belonged to Grand Duchess Alexandra Iosifovna (1830-1911), the wife of Grand Duke Konstantin Nikolayevich (younger brother of Emperor Alexander II). 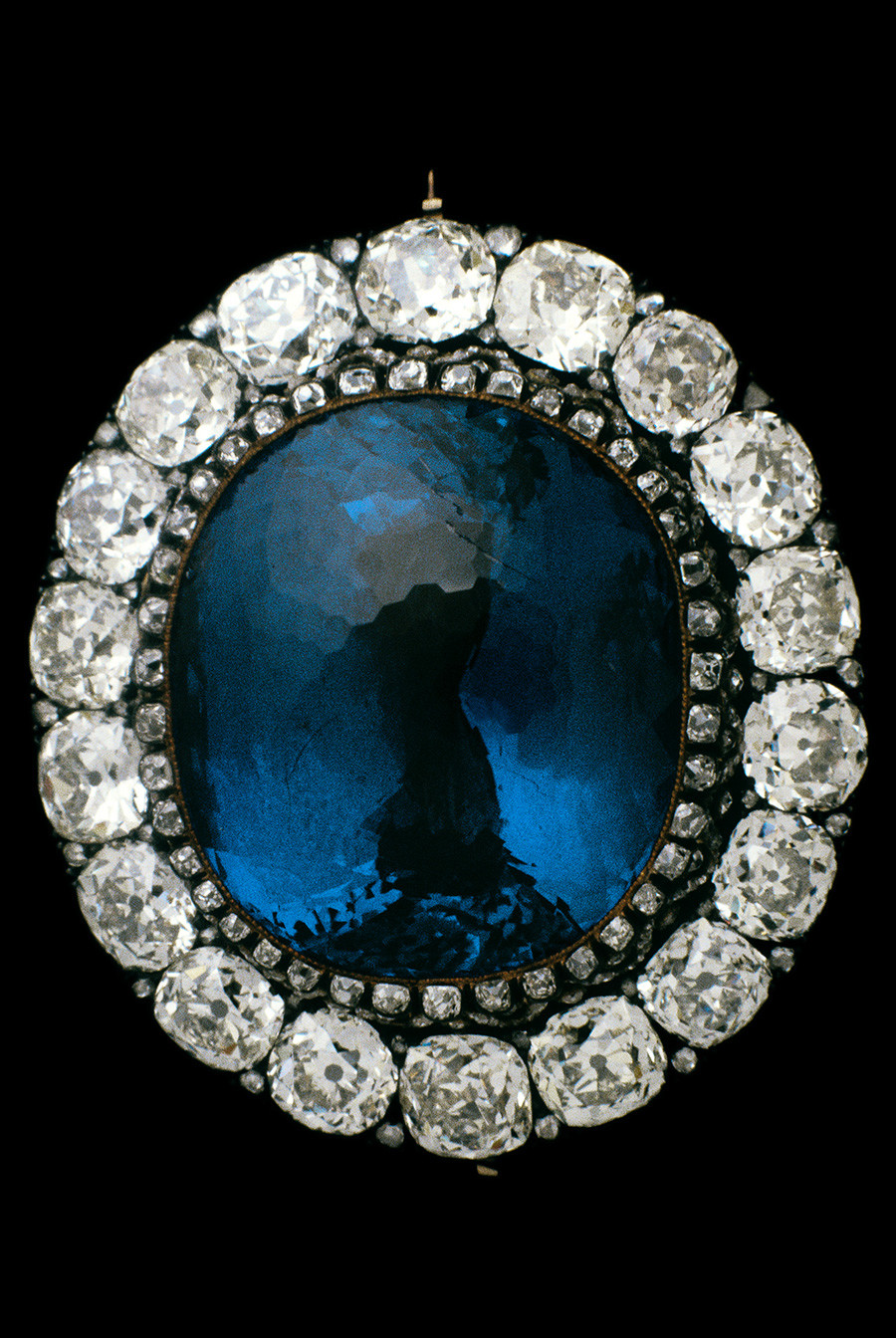 Empress Maria Alexandrovna (1824-1880), the wife of Alexander II, was known for her exquisite jewelry. Just one item from her collection remains in Russia: a brooch with a unique 260.37 carat oval Ceylon sapphire surrounded by a scattering of diamonds. Alexander II acquired this stone at an exhibition in London and presented it to his wife, and jewelers later inserted it into a brooch. 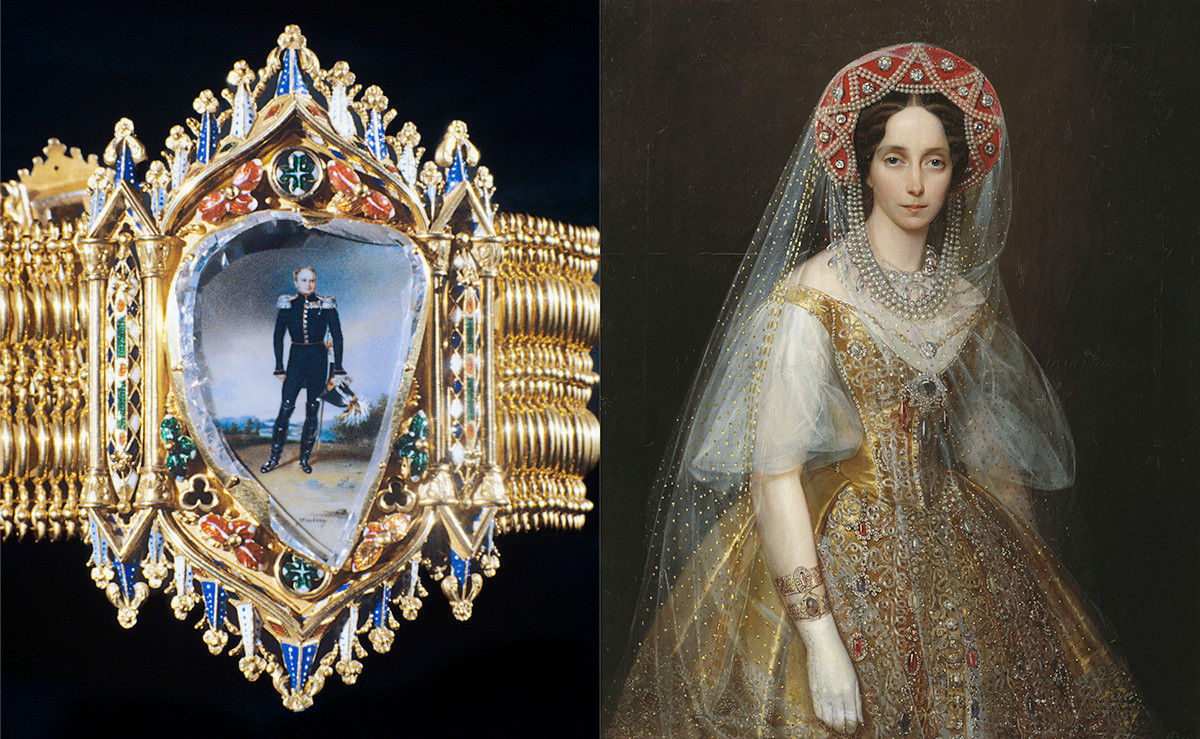 Empress Maria Alexandrovna poses for the picture in the Russian folk costume, wearing such bracelets.

In the Diamond Fund’s collection there is an unusual 19th century gold bracelet with a very rare Indian lasque diamond that is the largest of its kind. Diamonds like these are also known as portrait cut diamonds because they were used as covers for colored miniature portraits. In this case, it is a portrait of Emperor Alexander I (1777-1825).