5 Russian victories at the 2020 Tokyo Paralympics 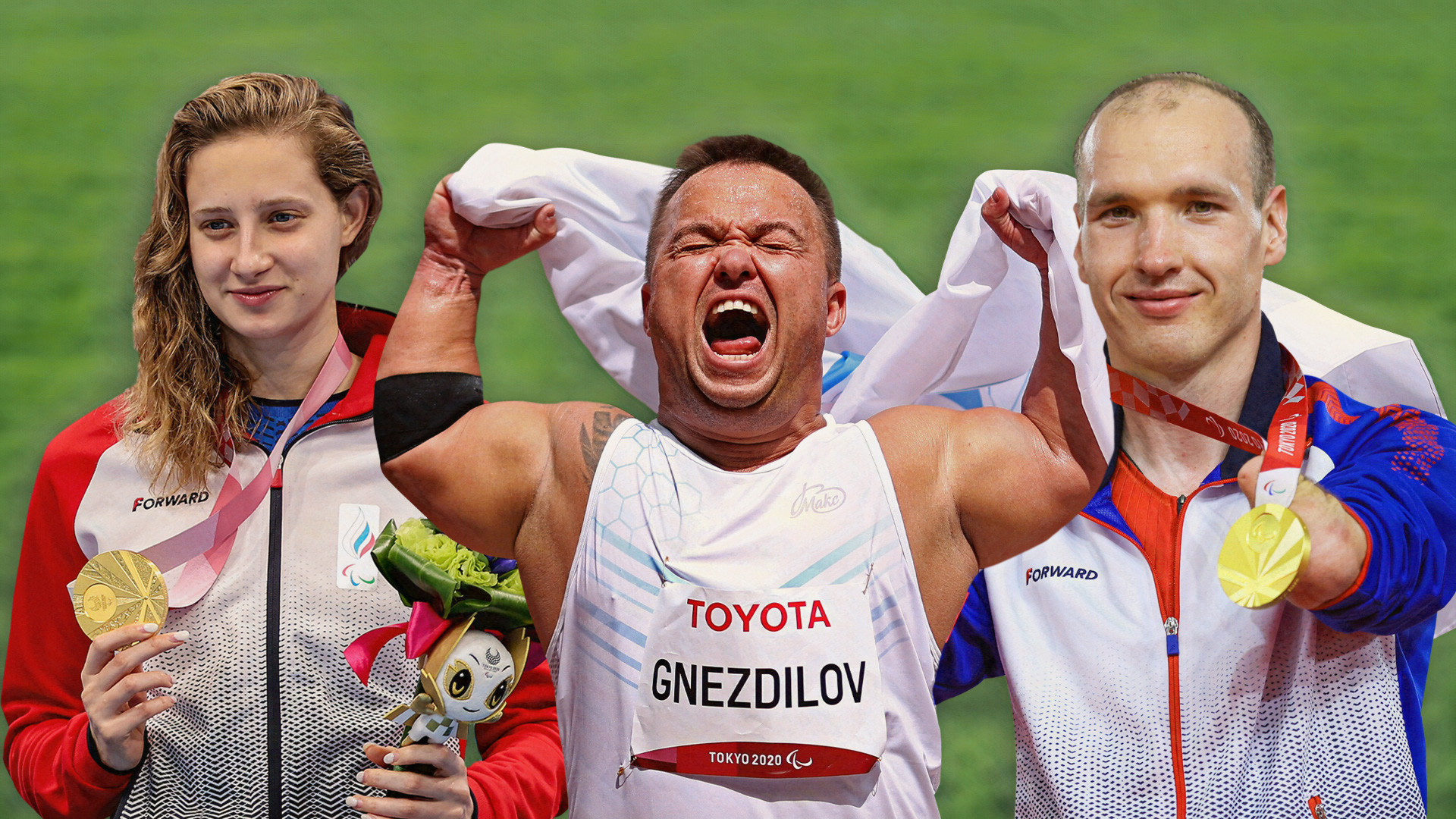 Russia Beyond (Photo: Lintao Zhang, Dean Mouhtaropoulos, Kiyoshi Ota/Getty Images)
These Russian paralympians - some without arms and legs, others with cerebral palsy, or a form impaired intellectual development - didn’t just win gold medals in Tokyo, but also set several new world records. We congratulate them on their victories and tell some of their stories.

1. Dmitry Safronov: Two records in 100 and 200 meter track and field among athletes with locomotor impairments 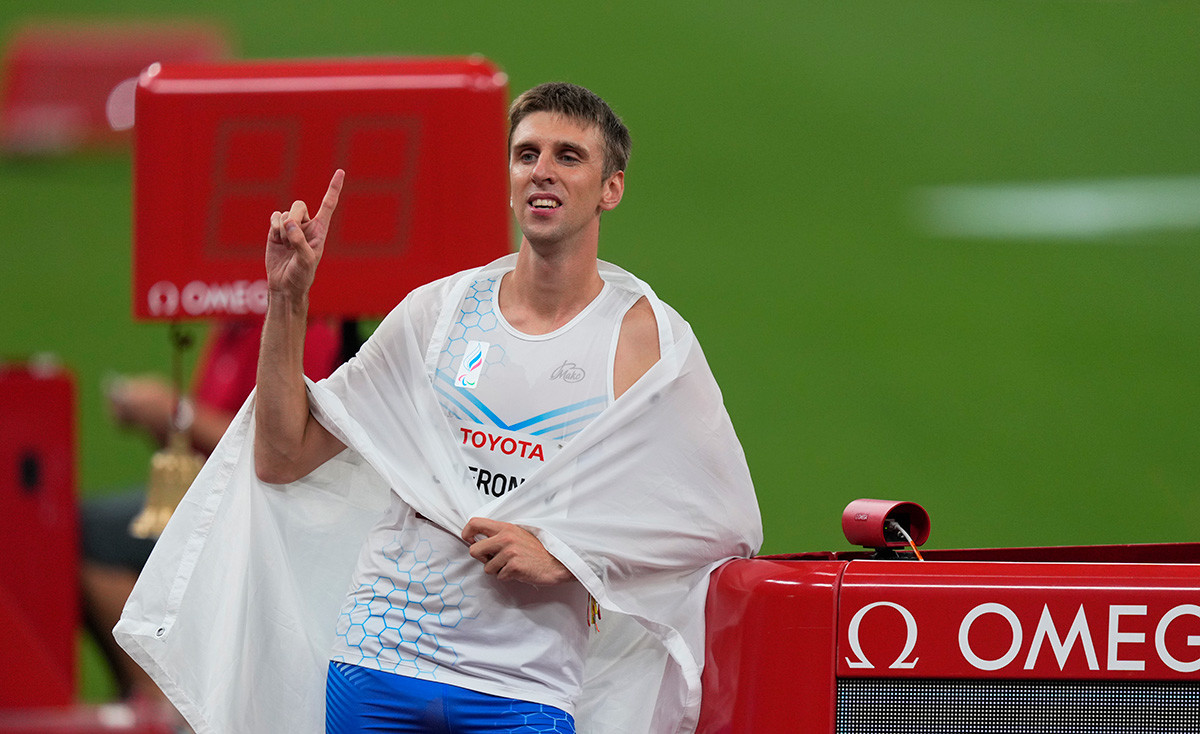 As a child, Dmitry Safronov, a 25-year-old with cerebral palsy from Nizhegorod Region, experienced difficulties with every step he took. Despite the diagnosis, his mother Elena enrolled the boy in athletics - according to her, sports helped him adapt to life among others and overcome numerous difficulties.

Already in 2016, Safronov won gold at the short distance track track and field championships in Europe. In Tokyo, he won two golds in the 100 and 200 meter track and field among athletes with locomotor impairments, setting new world records in the process.

“It’s all like a blur, I only remember the start, how I caught up to the Ukrainian athlete, shot out from the bend and then, the finish line, no one around me and I’m raising my hands in victory. But it’s always like this with me - focusing on the objective, on getting to the finish line and you don’t think about anything else. And then, at the finish, it’s all happiness and pride at getting my record back and my name next to it,” Safronov told the TASS news agency. 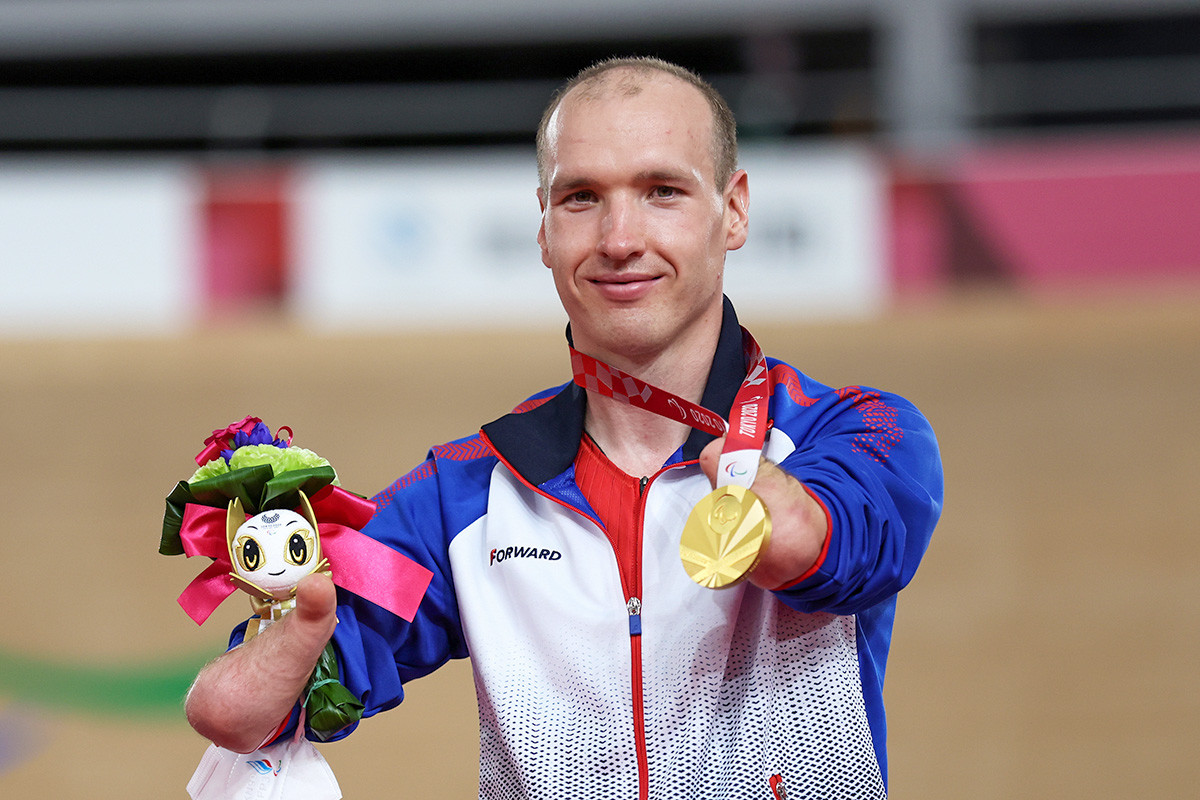 Gold medalist Mikhail Astashov of Team RPC celebrates on the podium during the medal ceremony for the Track Cycling Men's C1 3000m Individual Pursuit Final on day 2 of the Tokyo 2020 Paralympic Games at Izu Velodrome on August 26, 2021 in Izu, Shizuoka, Japan

Mikhail Astashov was born without arms and legs. His parents gave him up, resulting in him spending the first four years living in Buryatia, before relocating to a rehab center. When Astashov turned 16, his parents regained custody over him. He’d lived with them for a while in Buryatia. Then, in 2016, he moved to Ekaterinburg to train as a triathlete with a coach named Vladimir Alypov. At that point, he had been training in swimming for some time, while also playing volleyball and badminton.

In 2018, the young athlete scored a victory at the international IRONSTAR championships, while winning the Russian Cup several times in the disabled 100 meter breaststroke category and another time in triathlon.

In 2020, Astashov managed to work one day as a food delivery courier. He used his prosthetics to get around - the idea was to overcome the fear of encounters with strangers and to challenge the prejudices surrounding people with disabilities.

“When I walk the street, I often see fingers pointed at me. I wanted to show that I wasn’t ‘impaired’, that I can work wherever and as whomever I desire,” he told e1.ru 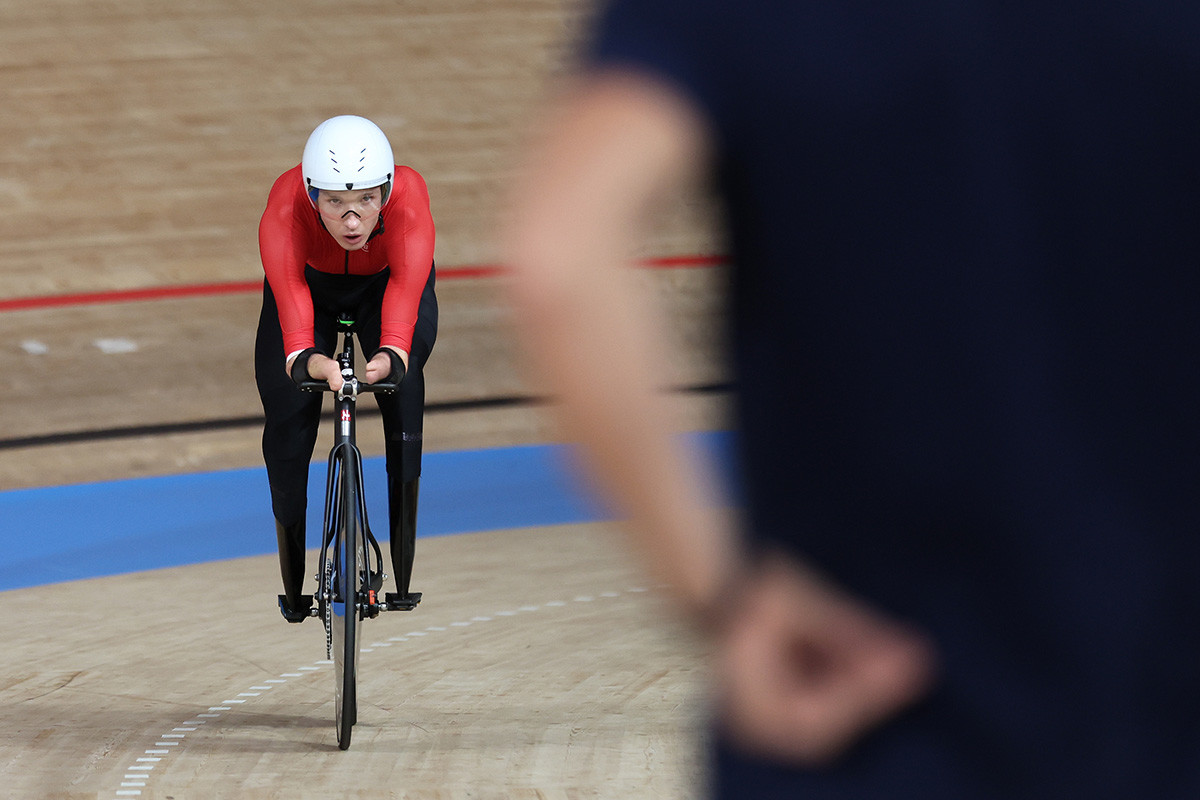 In May, 2021, Astashov won at the Russian Championships in cycling for individuals with limited capacity, soon winning two golds at the Paralympics in Tokyo - first in the 3,000 meter track - setting a new world record, then a 16-kilometer road race.

“I’m eternally grateful to God, my family, everyone who didn’t give up on me and everything that happened to me on the way to these medals… I will endeavor to continue inspiring and being inspired by everyone and everything on my life path. Because heroes are among us and each of us can become one,” Astashov said then. 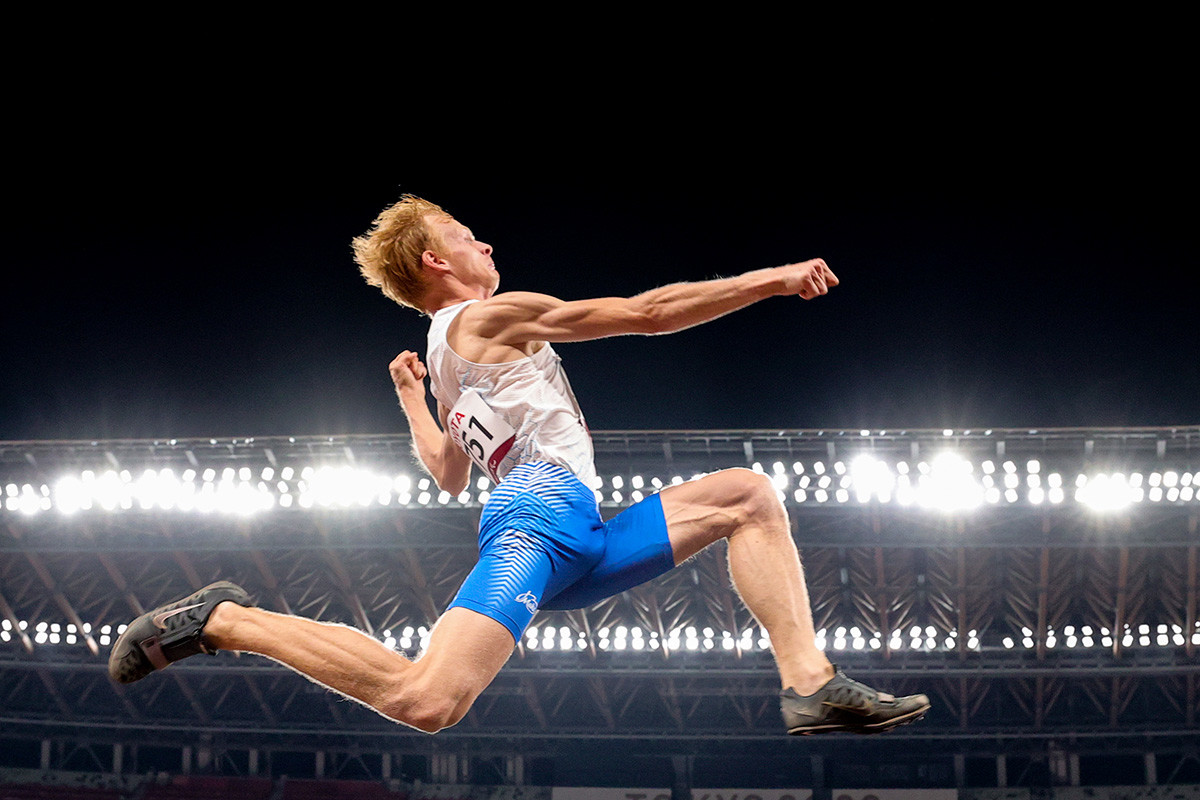 Evgenii Torsunov of Team RPC competes in the men's Long Jump --T36 on day 6 of the Tokyo 2020 Paralympic Games at Olympic Stadium on August 30, 2021 in Tokyo, Japan

Evgeny Torsunov was born in Perm Region in 1990 with the diagnosis of cerebral palsy. He was very keen on computers and IT as a child, graduating from the Perm University in 2014 with a degree in cyber-security. He began doing athletics a year before then and was soon participating in championships against other athletes suffering damage to the musculoskeletal system.

Torsunov is a two-time world champion. Earlier, in June 2016, the athlete set a long jump world record of 5.93 meters. At Tokyo 2020, he set another new Paralympic record with 5,76 meters.

“I’m very glad to have won today, I’m incredibly happy!... This is the result of the work put in with my coach, it’s our shared achievement,” Torsunov said after the victory. 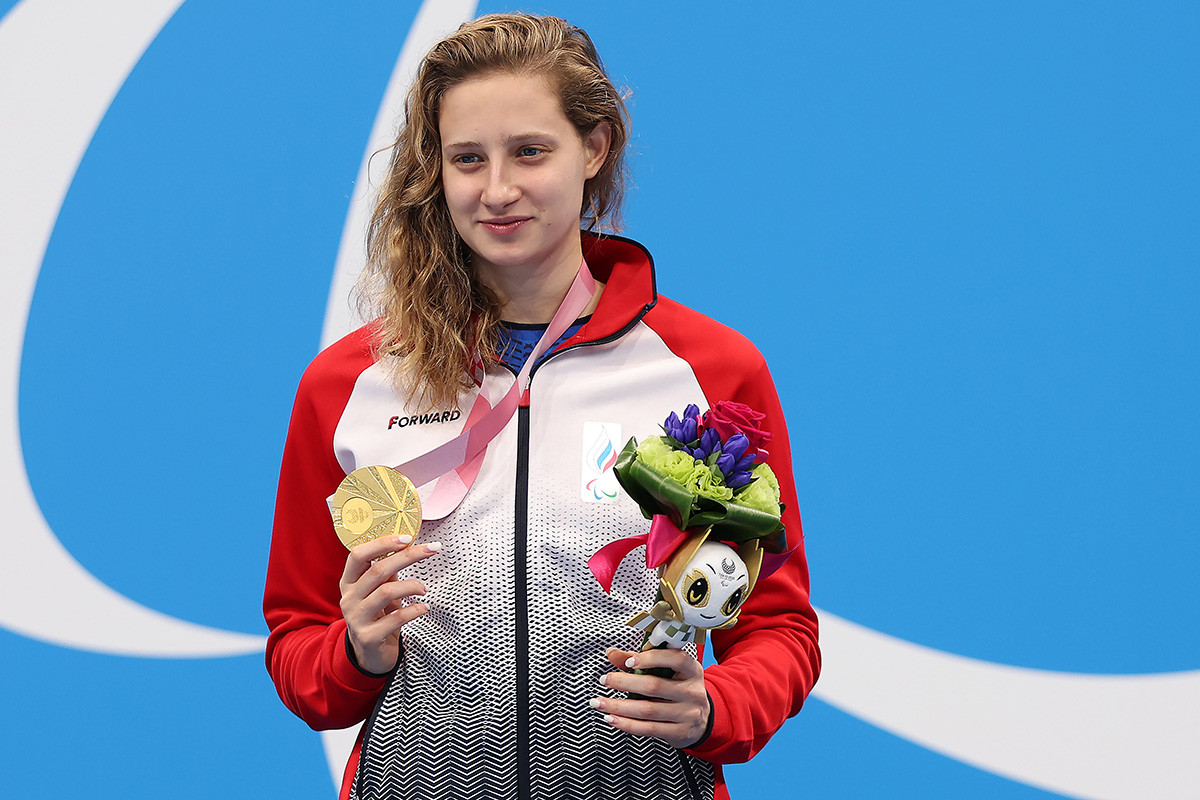 Valeriia Shabalina of Team Russian Paralympic Committee celebrates with the gold medal during the medal ceremony for the Women’s 200m Individual Medley - SM14 Final on day 7 of the Tokyo 2020 Paralympic Games at Tokyo Aquatics Centre on August 31, 2021 in Tokyo, Japan

26-year-old Valeriya Shabalina from Chelyabinsk - despite being diagnosed with a number of different intellectual disabilities, has been in figure skating and rhythmic gymnastics since the age of five. At seven, doctors advised her to take up swimming to help with the tremors in her leg muscles. Rehabilitation became a major part of her life.

In 2015, Shabalina was already a two-time world champion and three-time European champion. The young woman also won three golds at Tokyo 2020 this year, in the 100 meter butterfly style, 200 meter freestyle and 200 meter individual medley in the SM14 classification. She also won the silver medal in the 100 meter backstroke category. She also managed to set a new world record in her first competition at the Paralympics, finishing the race in 63.59 seconds. 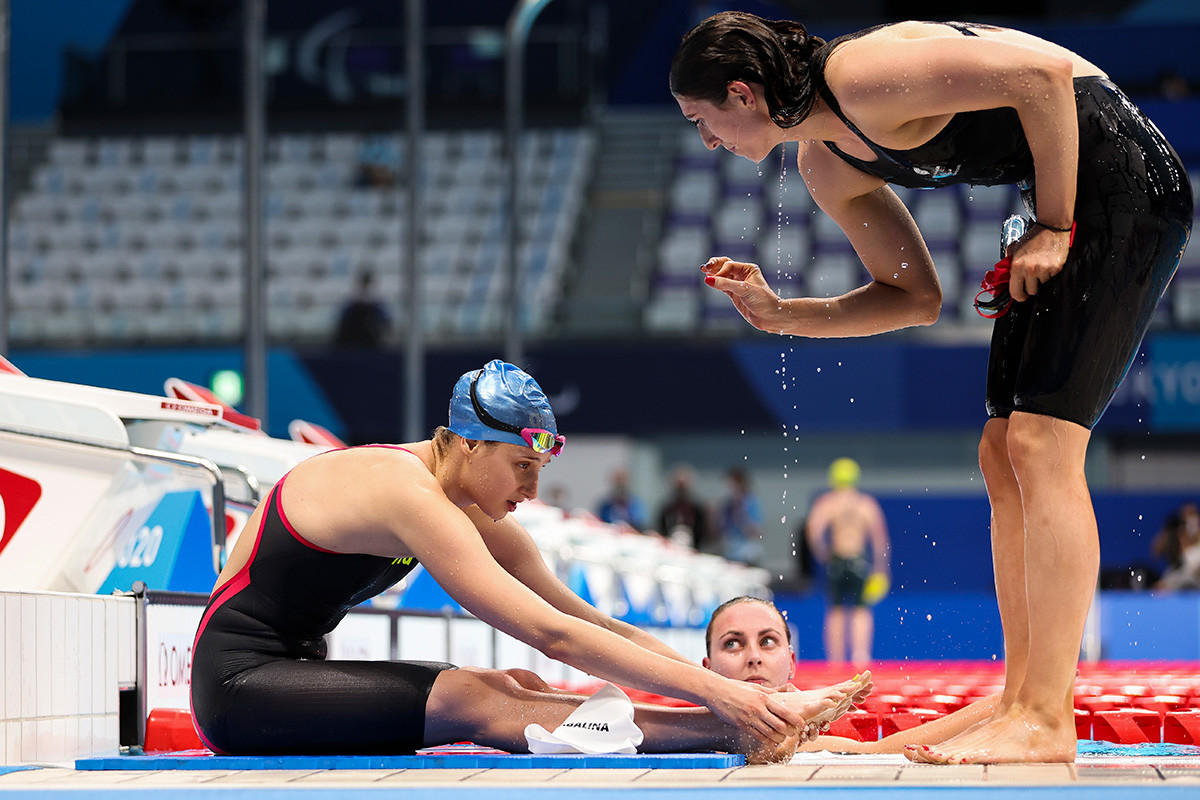 “I can easily give myself an ‘A’ in this tournament. The most difficult swim? The 200 meter individual medley was tough, there were some serious opponents there, but I beat them,” the athlete said in jubilation after the win. 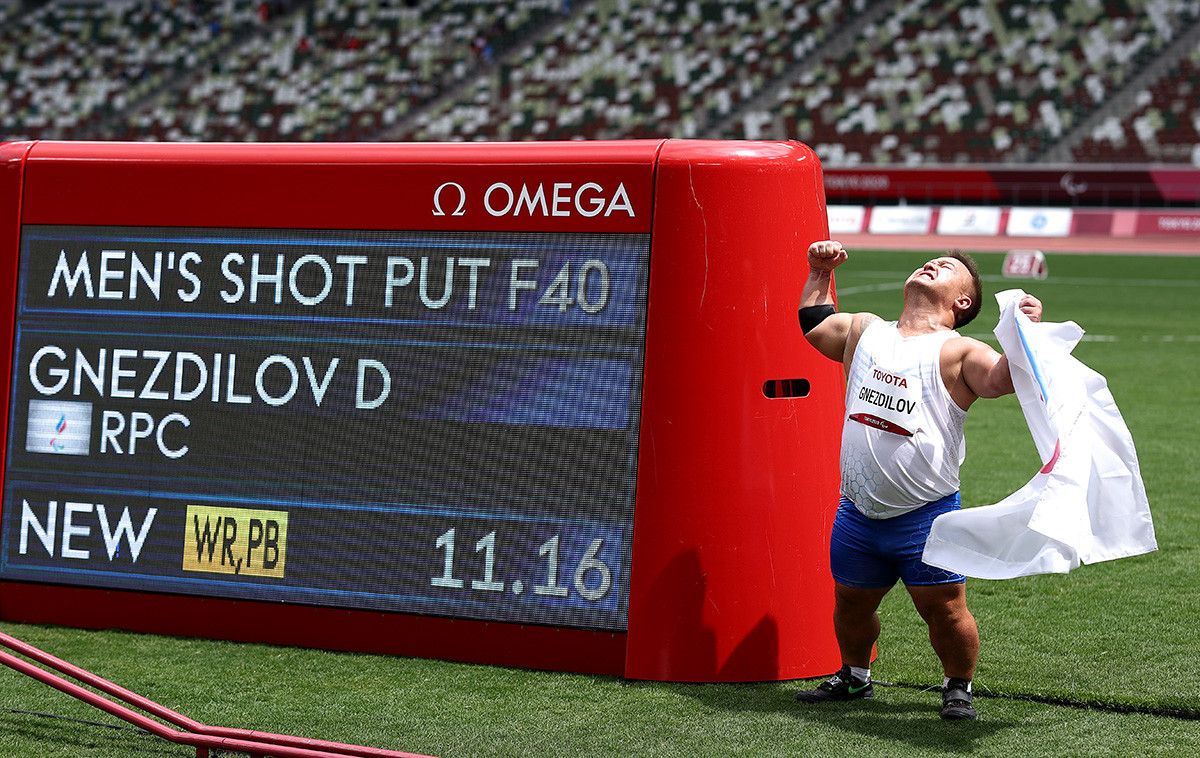 Unlike the vast majority of athletes, Denis Gnezdilov, 34, began doing sports at the late age of 19 - the future champion worked the door at a Sochi nightclub. He was into powerlifting, then quit his job, deciding to dedicate more of his time to sports. He was introduced by a friend to the famous Russian athletics coach Nikolay Kolodko, who began training him in powerlifting. However, after failing to achieve success in championships, Denis transitioned to the shot put.

In Tokyo, Gnezdilov set a new world record on his first try with an 11.02 meter put. His run was almost derailed during the final go by Iraqi Garra Tnayash, with 11.15 meters. However, Gnezdilov emerged victorious with 11.16 meters, resetting the world record and winning gold.

“I’m not going to say that my last try was clean, just threw it as strong as I could, then yelled my head off for good measure… I would tell myself each day: ‘You’re a champion, you will come and take the gold.’ I’d write it down in my notebook,” Gnezdilov told TASS.

The athlete plans to continue doing sports and has plans to perform at the 2024 Summer Paralympics in Paris.