How does Russia help Afghan refugees? 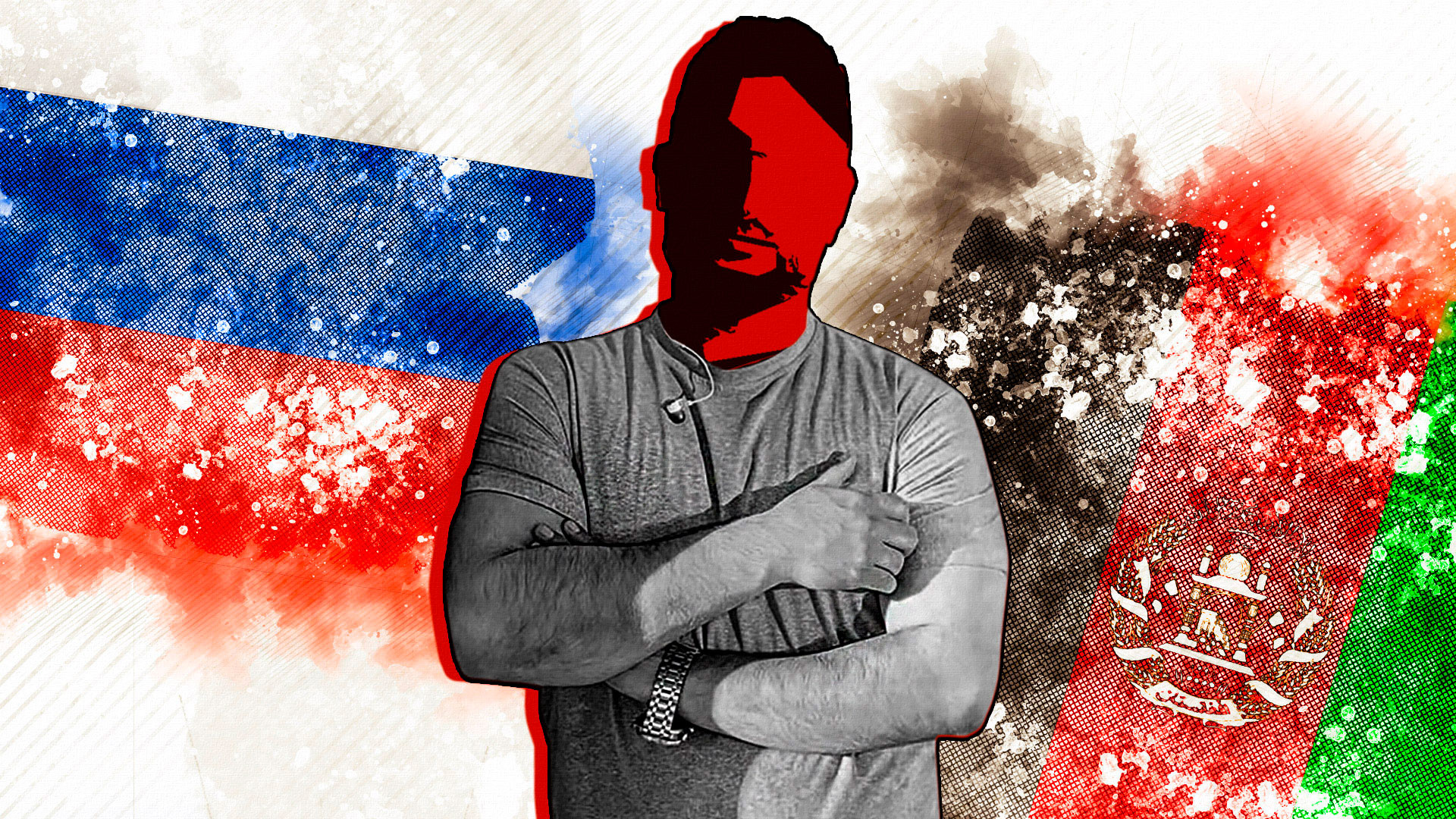 Russia Beyond (Photo: Mikhail Mishchenko/Getty Images; Personal Archive)
We explore how people from Afghanistan survive in a country that gives refugee status to almost no one.

Omid, a 30-year-old graduate from the English and Literature Faculty of Herat State University in Afghanistan, and who worked as an editor there for a local TV channel just a year ago, has been getting up at 4 a.m. for the past three months. An hour later, the “Moskva” market opens in the Lyublino district in southeast Moscow, his new workplace.

Every day, seven days a week, from 5 a.m. to 6 p.m., Omid unloads Chinese bags, wallets and purses from the warehouse and sells them. For this he receives 30,000 rubles a month (about $413). The money is enough for food, a bunk in an eight-bed dormitory near the market (8,000 rubles a month, about $110) and a remittance to his wife, who still lives in Afghanistan. He admits feeling depressed in Russia, while every day his boss at the market demands ever more of him.

Despite everything, Omid is lucky to have a job and a roof over his head. Many illegals do not have even this, and are condemned to an even harsher existence.

“I want someone to help me officially register here [with the immigration authorities] and get permission for my wife and family to move to Russia. My life in Afghanistan was destroyed; it brought so much grief. I have to start from scratch in Moscow, it’s very hard and I’m tired,” Omid complains.

On April 13, U.S. President Joe Biden announced the withdrawal of American troops from Afghanistan by the end of August 2021. In the space of four months, the radical Islamist Taliban movement (recognized as a terrorist organization in Russia) completely recaptured Afghanistan, as declared by its leaders on Aug. 15, 2021. 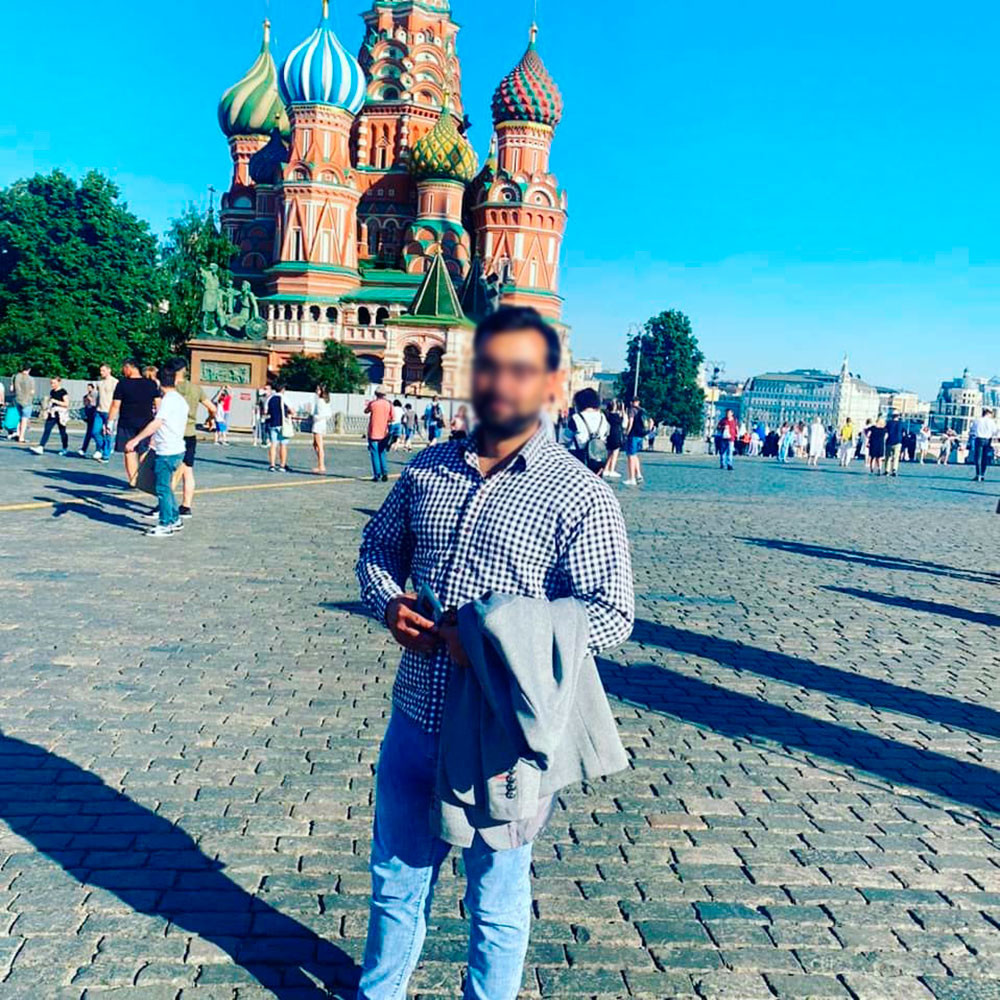 “We are ready to provide Russian civil aviation services to provide flights for any number of Afghan citizens, including women and children, to any foreign countries that show interest in receiving and accommodating them,” Zakharova stated at a press briefing on Aug. 19.

The Russian president spoke out against accepting refugees from Afghanistan into Russia, as well as into the countries of Central Asia, before they had received visas to the U.S. and Europe, citing security reasons and the threat of militants entering the country under the guise of refugees.

“The number of [refugees] could be in the thousands, even the hundreds of thousands. Maybe in the millions. And we and our closest allies and neighbors do not even have visa restrictions. What border is there anyway? It’s a thousand miles long. They can get a car or even a donkey, and ride across the steppe,” the president said on Aug. 22 at a meeting with United Russia party representatives.

At the same time, Russia rarely grants refugee status. As of end 2020, there were just 455 registered refugees in Russia, and throughout 2020 only 28 people were granted this status, wrote newspaper Parlamentskaya Gazeta, citing a report by the Federal Agency for Ethnic Affairs.

By Aug. 25, Russia had evacuated its own citizens, as well as citizens of Belarus, Kyrgyzstan, Tajikistan, Uzbekistan and Ukraine, aboard five Defense Ministry planes; around 500 people in total. However, some Afghans still managed to enter Russia. In addition, there are Afghan students at Russian universities who are afraid to return home and dream of saving their loved ones from the Taliban-occupied country.

How many Afghans are there in Russia? How do they survive? Who helps them settle in a country that does not officially accept Afghan refugees?

On Aug. 15, 2021, the day when the Taliban officially took control of Afghanistan, a dozen or so anxious Afghan students at the Rostov School of Police Dog Breeding under the Russian Interior Ministry in Yegoryevsk (97 km from Moscow) entered the narrow, well-lit corridors of a nondescript panel building in Moscow. The building houses Civic Assistance, one of the few NGOs in Russia that helps migrants and refugees (in 2015, Russia recognized it as a “foreign agent”). The center provides legal, medical and humanitarian assistance, and also helps with socialization, including online Russian lessons.

The students pleaded with staff to help relocate their families to Russia, and inquired desperately if they’d be sent back to Afghanistan.

“Many pay for their studies and don’t have time to earn extra money. Their parents in Afghanistan send money for their education, many of whom have now lost their homes and incomes. We reassure and advise our Afghan students, but we don’t know whether the state will teach them for free,” says Laila Rogozina, head of the NGO’s community liaison office. 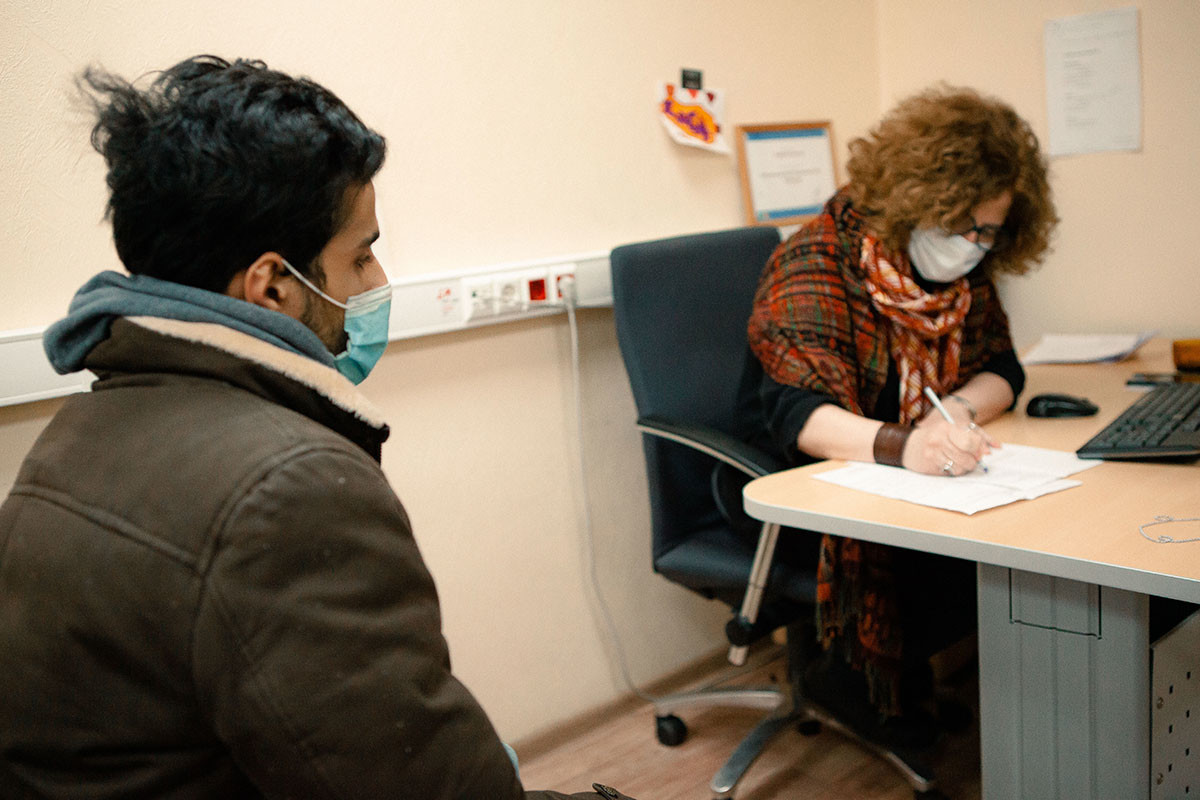 In June 2021, besides students, Afghan citizens freely entered Russia with a Fan ID, which allowed foreign supporters to attend Euro 2021 soccer matches in the country. According to the rules of entry, foreigners had to leave Russia after the tournament by the deadline of July 12, 2021, but many Afghans, fearful of the Taliban’s returning to power, used the Fan ID system to escape the country.

"A former businessman came to us recently with his mother and sister, the owner of an air-conditioner plant in Afghanistan. While he was watching the Euros, his business was taken over and plundered by the Taliban. He was a big player, well-off, but he lost everything overnight. He says, 'They’ll kill me if I go back. I rent an apartment here, there’s nowhere to work. If things settled down tomorrow, I’d return,'" Fahim Feroz, a Civic Assistance coordinator-interpreter, shared the man’s story.

Every day, 10-20 Afghans come to Civic Assistance for help in obtaining a temporary residence permit or political asylum. In the meantime, they rent rooms from other Afghans and look for work in the markets, since no one else will take them. Some refugees can be targeted by skinheads, says Rogozina, though noting that such incidents have become extremely rare lately. When Afghans apply to the migration service for documents, they are detained – they are not kicked out of the country, but are fined 5,000 rubles (about $70) for violating their stay on Russian territory.

“Recently, three Afghans were detained and left overnight in a temporary detention center without food and water. Our lawyers filed a complaint and represented them in court – the result was a fine without eviction from the country,” says Laila Rogozina.

Other groups of Afghans in June and July 2021 tried to enter Russia through Uzbekistan and Tajikistan. Some were detained at the border or inside Russia, and imprisoned, Rogozina said. 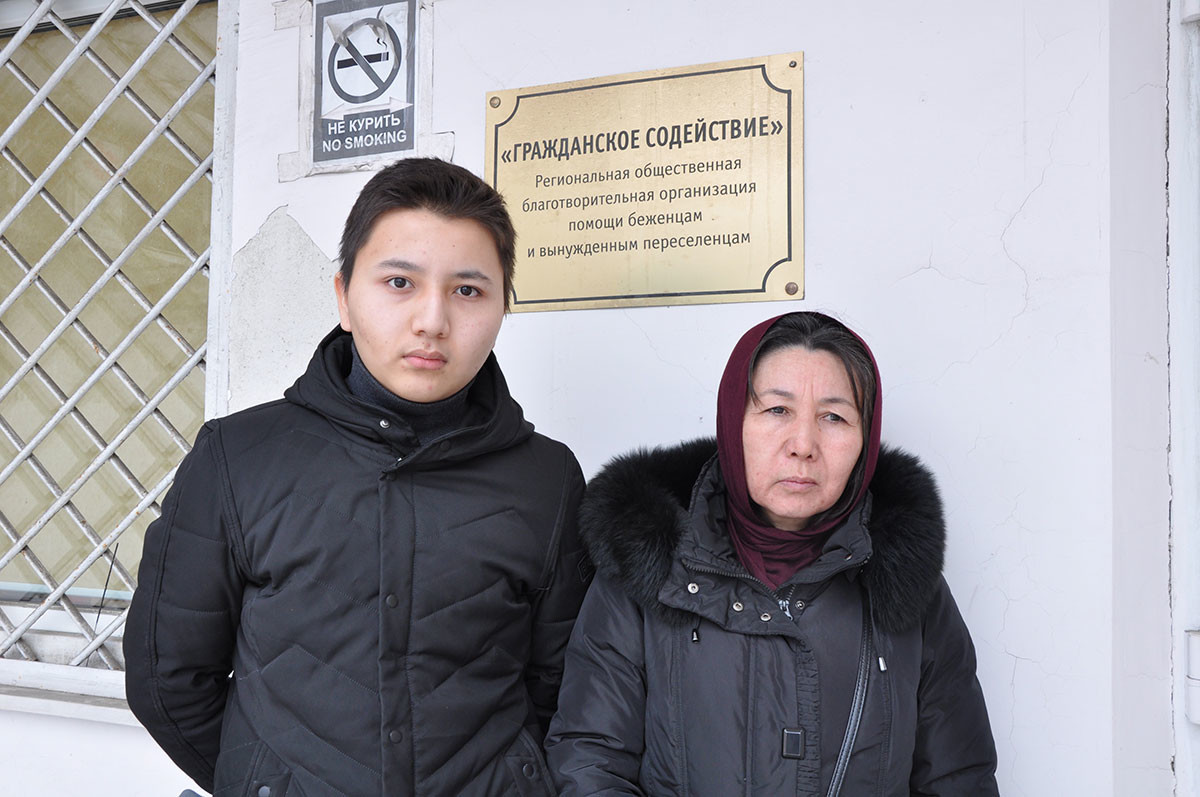 “At our institution in Saratov is a large family who managed to cross the border illegally through Tajikistan and asked for political asylum in Russia. The men were detained and spent two months in prison, while we helped the women and children with money. In the end, the migration service sent them to a refugee camp in Krasnoarmeysk,” Rogozina revealed.

She says that Civic Assistance considers each application for financial help separately, since the organization exists on donations and assistance from the embassies of EU countries. Most often, they allocate money to those who are seriously ill or to large families with children.

“If Afghan refugees make it to Russia and can’t return home because it’s dangerous there, then the state should accept, not oppose, them,” believes Rogozina.

Life in Russia, fear of Afghanistan

Omid, it seems, like other refugees, entered Russia under the Fan ID scheme, hoping to stay. His relatives remained in their native Herat, including his wife, who studies at the only college in the city.

“When the Taliban entered the city, I thought they might kill the women, so I forbade her from going to college. I went to Civic Assistance, who said I need to get a temporary residence permit. But I’m afraid to apply to the migration service, since I have no documents and they could put me in jail. I’m afraid, but I dream of being reunited with my family,” explains Omid.

Another Afghan resident, 25-year-old Bashir from Kabul, is a fourth-year student at the Russian University of Transport and lives in a hostel. His relatives remained in Kabul; he has been earning a living as a Dari-Russian interpreter.

“They have no jobs there [in Afghanistan], nothing, all the offices and banks are closed, girls cannot go to school. I want to help my family, but I don’t know how and I don’t know when it will all end,” Bashir despairs. 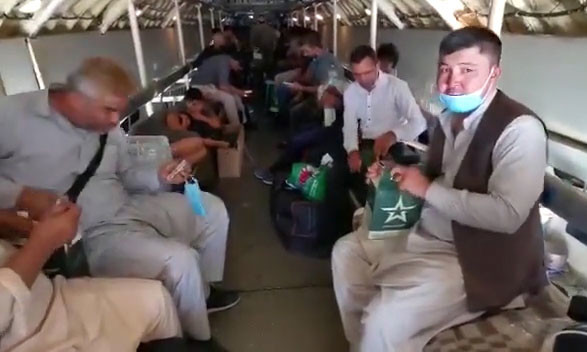 Passengers in the cabin of the IL-76MD cargo aircraft during the evacuation of Russian citizens from Afghanistan.

Some Afghan graduates of Russian universities were forced to return home, yet they are still looking for ways to relocate to Russia. Foreign students are able to apply for a residence permit, provided they have studied on campus and received a “red diploma” (graduated with honors).

Elham entered the Rokossovsky Military Institute in Blagoveshchensk (7,800 km from Moscow) in 2016, and graduated with a “blue diploma” (received by all graduates, regardless of grade), which ruled out applying for a residence permit in Russia. In 2021, when his studies finished, he was forced to return to Kabul. He says it was difficult for him to learn Russian, and complains about the small allowance of 11,000 rubles (about $150) and that he “often froze at the shooting range.” Nevertheless, he still wants to return to Russia, because life in Afghanistan is so much more difficult now.

“Flour, butter and rice prices there have shot up; the Taliban beat up my friend. The new government has no plans for the country’s future. They say, ‘Be patient, Allah will assist.’ I want a visa to Russia; after all, I studied there for six years,” Elham says.

No country for refugees

According to interpreter Fahim Feroz, a total of 100,000 Afghans live in Russia, but only 256 have received refugee status, and that happened back in the 1990s. Another 514 Afghans live in Russia with temporary asylum rights, the newspaper Kommersant reports, citing data from the Ministry of Internal Affairs for 2020.

Those who want to stay in Russia are usually migrant workers without higher education. English-speaking Afghans with a university degree, especially doctors and engineers, prefer to leave for Europe, using Russia as a transit country, Fahim says.

Feroz dreams that one day Russia will allow Afghans to work freely, provide for themselves and pay taxes. 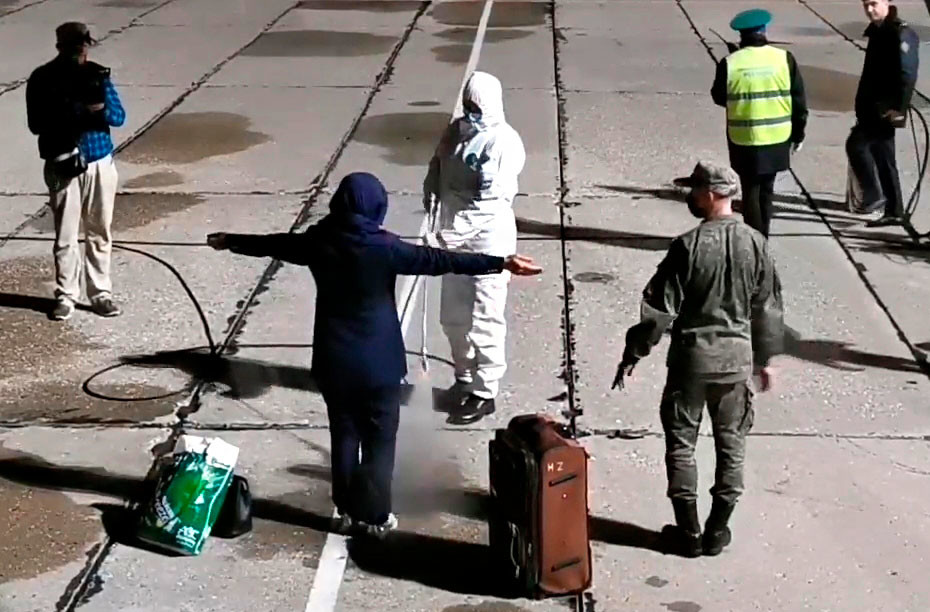 “Russia is not a country for refugees. I received [refugee status] with great difficulty after 15 years, and it took me more than 20 years to get citizenship, although I worked as an interpreter and at Sputnik radio station. Our guys have been waiting for an interview to get temporary asylum for months now, although they are supposed to be processed within a week of arrival as refugees. That’s Russia’s welcome,” Feroz sums up.

Russia Beyond requested comment from the Russian Foreign Ministry regarding assistance to Afghan refugees in Russia. Its press service replied that migration issues fall within the competence of the Ministry of Internal Affairs and the Ministry of Education. Russia Beyond made inquiries there, but at the time of publication had not received a response.