What items of status did Soviet people own? (PHOTOS) 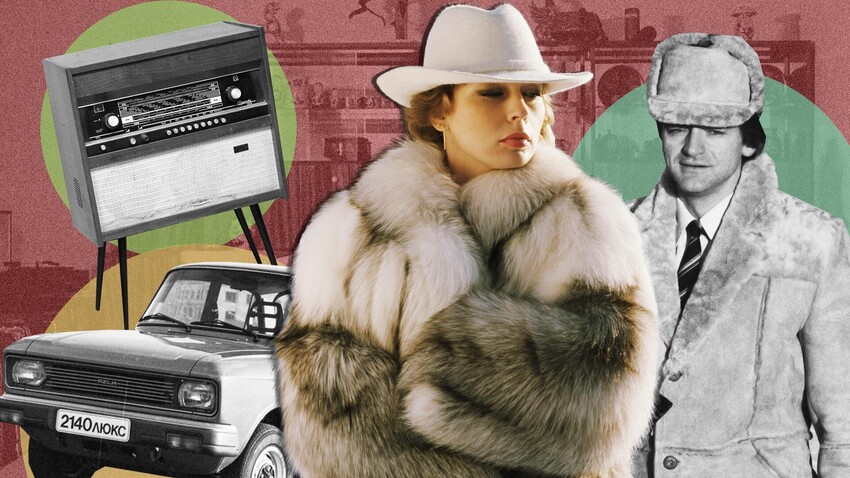 Kira Lisitskaya (Photo: Yuri Belinsky; Valery Zufarov; Vyacheslav Un Da-sin; Vladimir Voitenko; Anatoly Morkovkin/TASS)
In the USSR, real luxury was inaccessible for most people. Regardless, they needed items of status that would show their wealth – however, sometimes these were quite plain items.

In Soviet society, luxury itself was eyed warily – according to Communist ideology, luxurious living and excessive wealth were bourgeois vices. Ironically, living in luxury – with personal dachas, cars and paid trips to the seaside – was the norm for high-standing Communist Party officials, high-ranked military commanders, scientists, actors and writers – essentially the elite of Soviet society. Luxury couldn’t be simply bought with money, one needed a social standing to be allowed a high life. 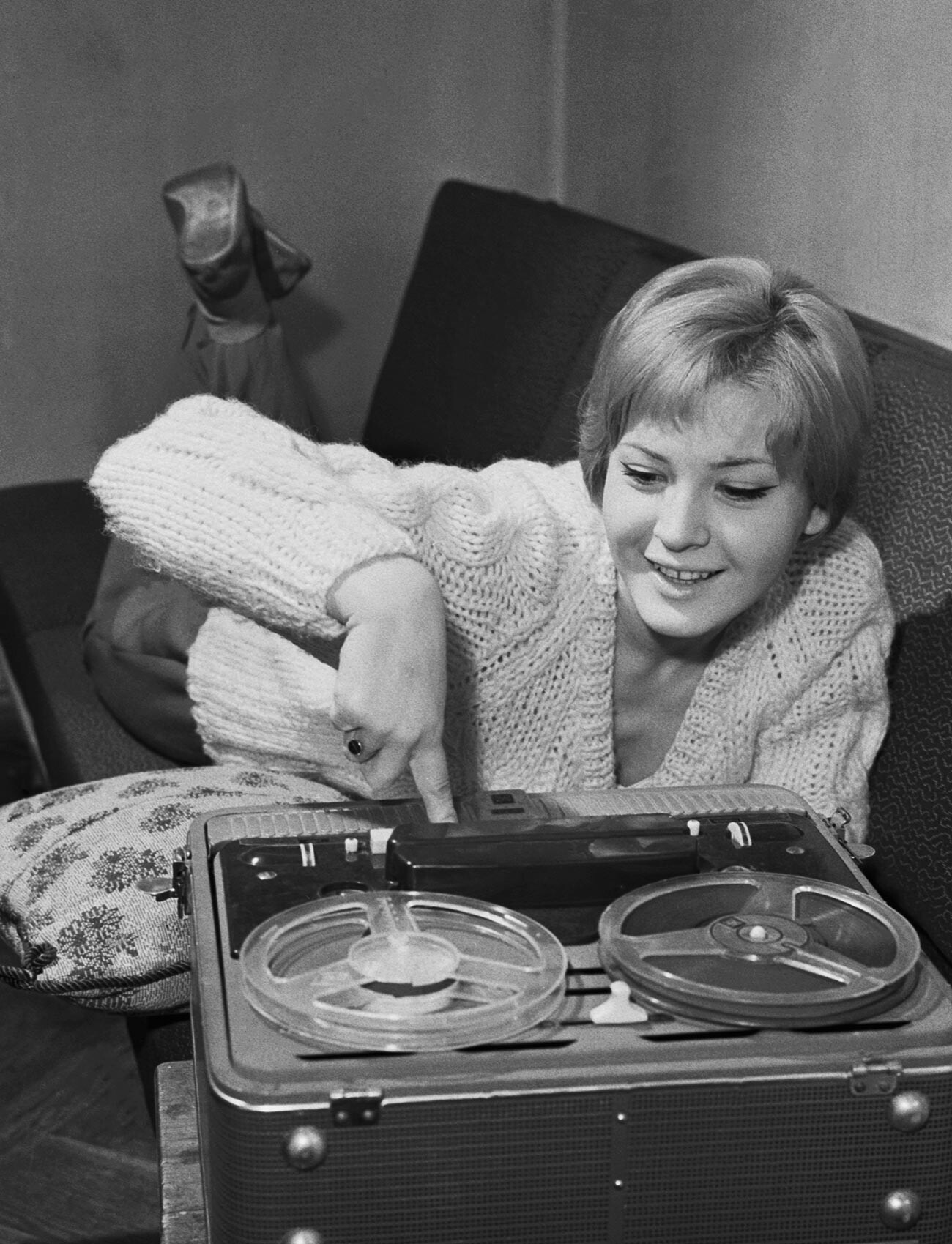 For ordinary citizens, however, luxurious items usually amounted to warm clothing, quality furniture and other household items. But, buying them wasn’t an easy task – sometimes, one had to wait for months for one’s turn to buy some furniture or a TV set. We collected a selection of memoirs by various prominent Soviets who detailed their hunt for these items of status. 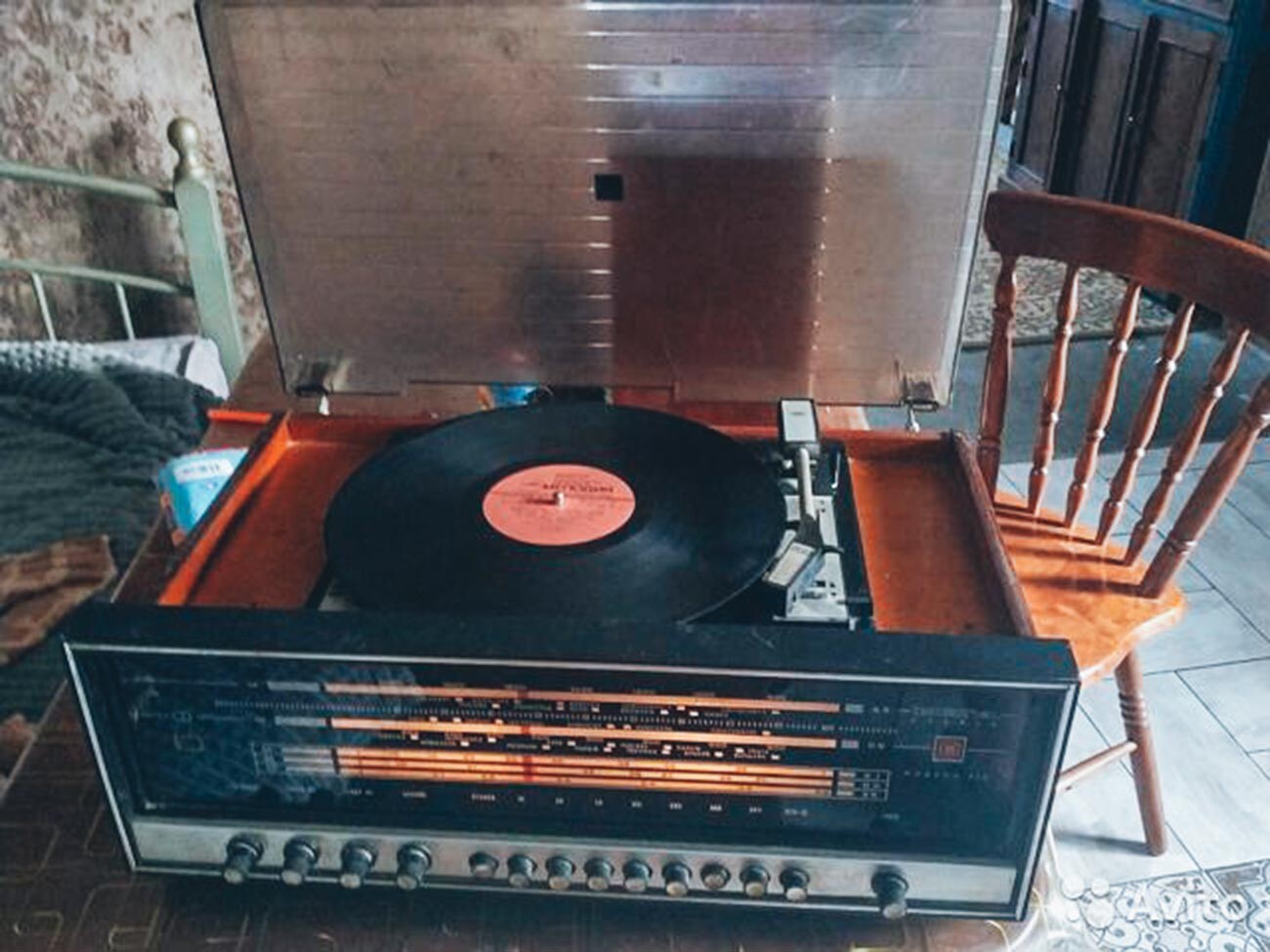 Soviet audiophiles mostly listened to music from radiograms – massive wooden boxes that combined a radio and record player. You couldn’t carry such an audio system with you. The first portable record player called ‘Romantika’ appeared in 1965. It was a rare item – it cost 165 rubles (an average monthly salary was around 125 rubles at the time), but nevertheless, it was hard to find in stores.

Previously, in 1960, a record player made in Kiev called ‘Dnieper’ cost a whopping 1,250 rubles, geologist Boris Vronsky once wrote. “In Kiev, only three or four of them went on sale and they were instantly sold out.” 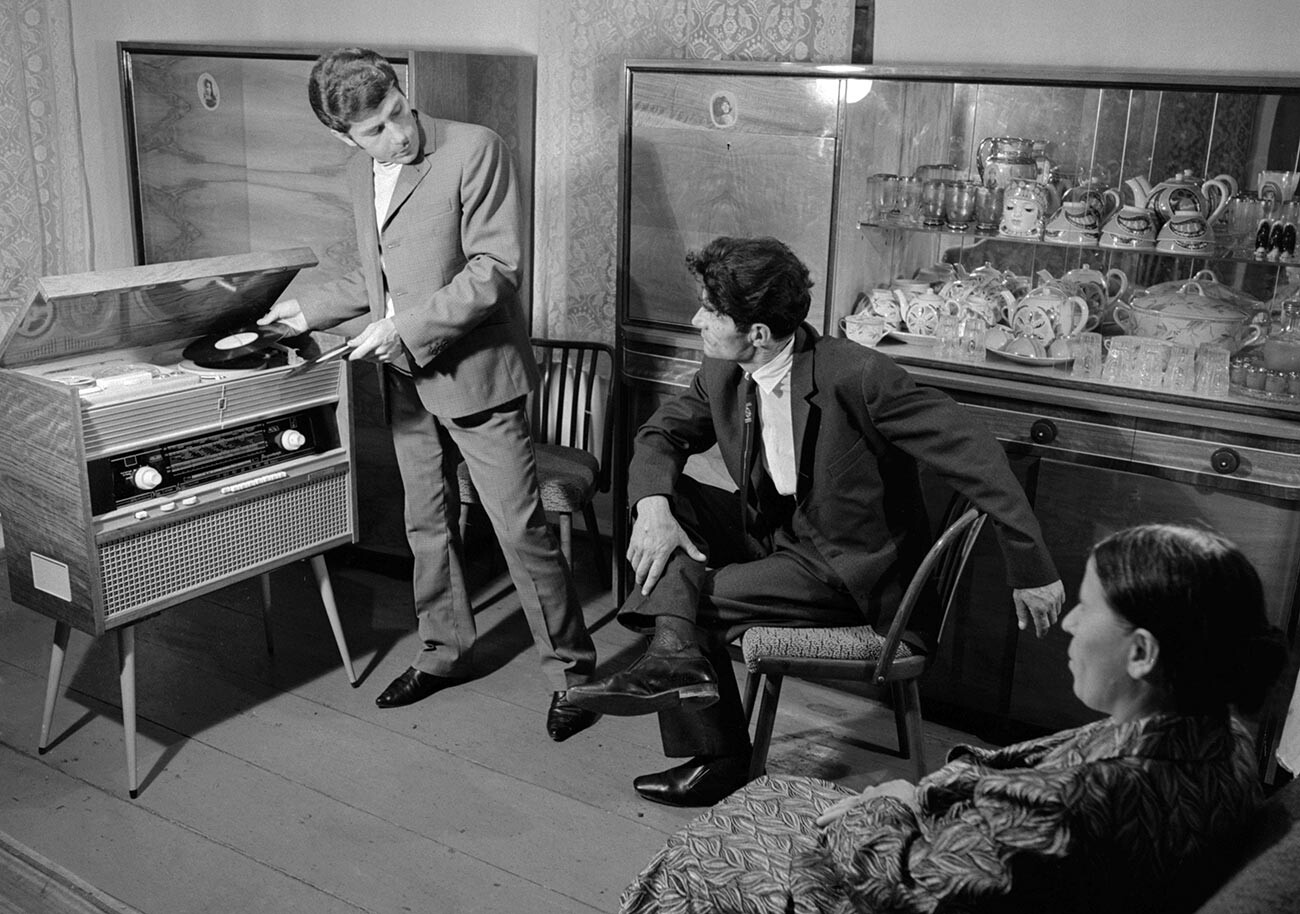 Soviet people and a radiogram.

However, Soviet-made record players often had technical problems, so only foreign players really “counted” as luxurious. In 1967, Vronsky visited his friend and wrote: “He has a beautiful, well-furnished apartment, a Japanese radio receiver of the National Panasonic Transistor 2 speaker brand, which he bought with his own hands, paying 270 rubles.” 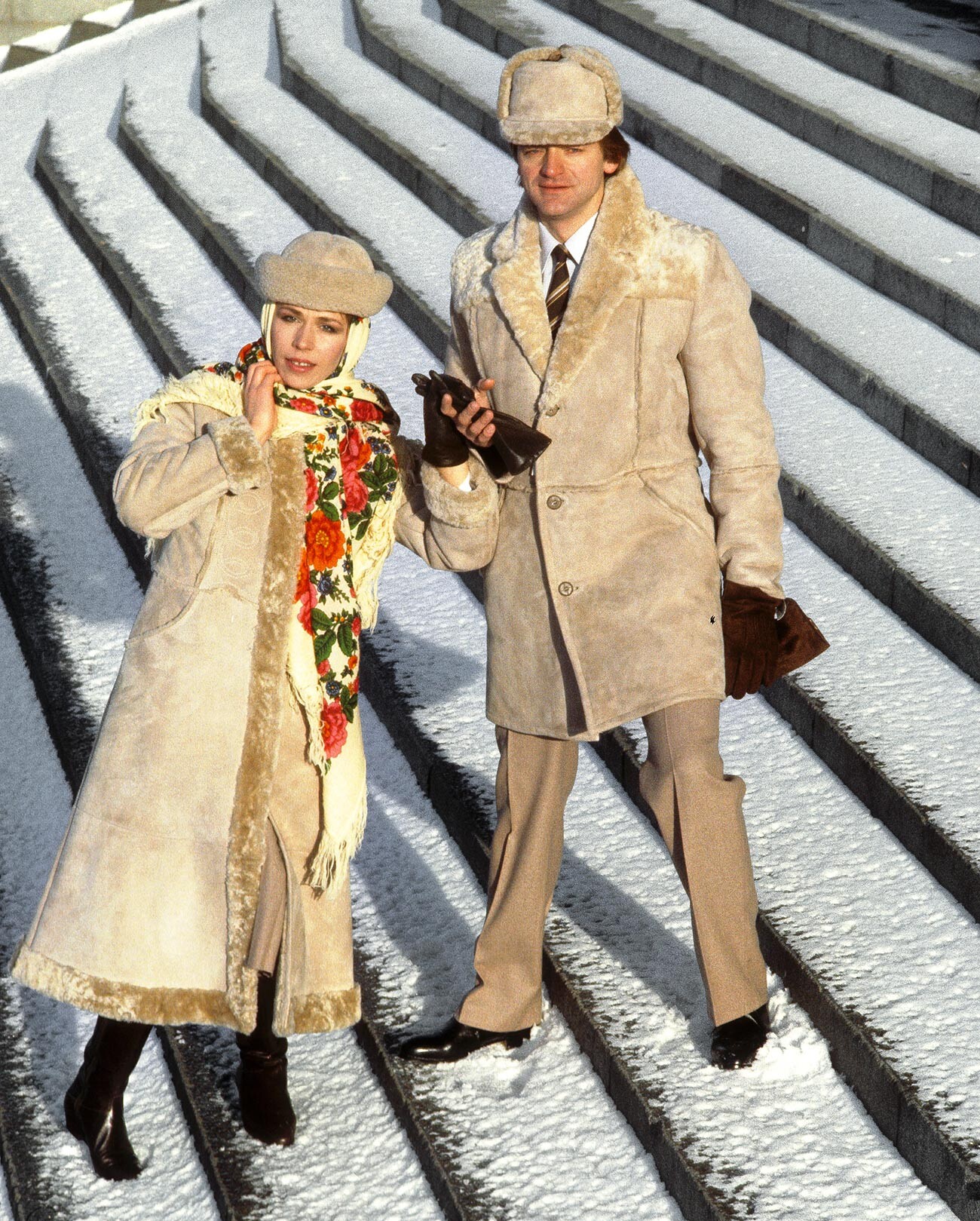 In 1968, young actor Valeriy Zolotukhin was waiting at a service entrance to a famous Moscow theater hoping to see a show without a ticket. “I saw sheepskin coats approaching the entrance. These were the [big shots],” Zolotukhin wrote. Indeed, a sheepskin coat was a piece of clothing that was hard to procure – it could cost more than a month’s salary and it wasn’t readily available in stores.

“Sheepskin coats, leather coats for every taste, a huge variety of women’s clothing and shoes,” Anatoliy Chernyaev wrote in 1977 when he was in Budapest on a visit. He was a high-ranked Party official at the time, but even he was impressed at the variety of goods in the European country. Even Vladimir Vysotsky, a musician and actor who frequented Europe and owned foreign cars, was very proud, actress Alla Demidova wrote in 1969, when he managed to get a sheepskin coat for his wife in Yugoslavia. 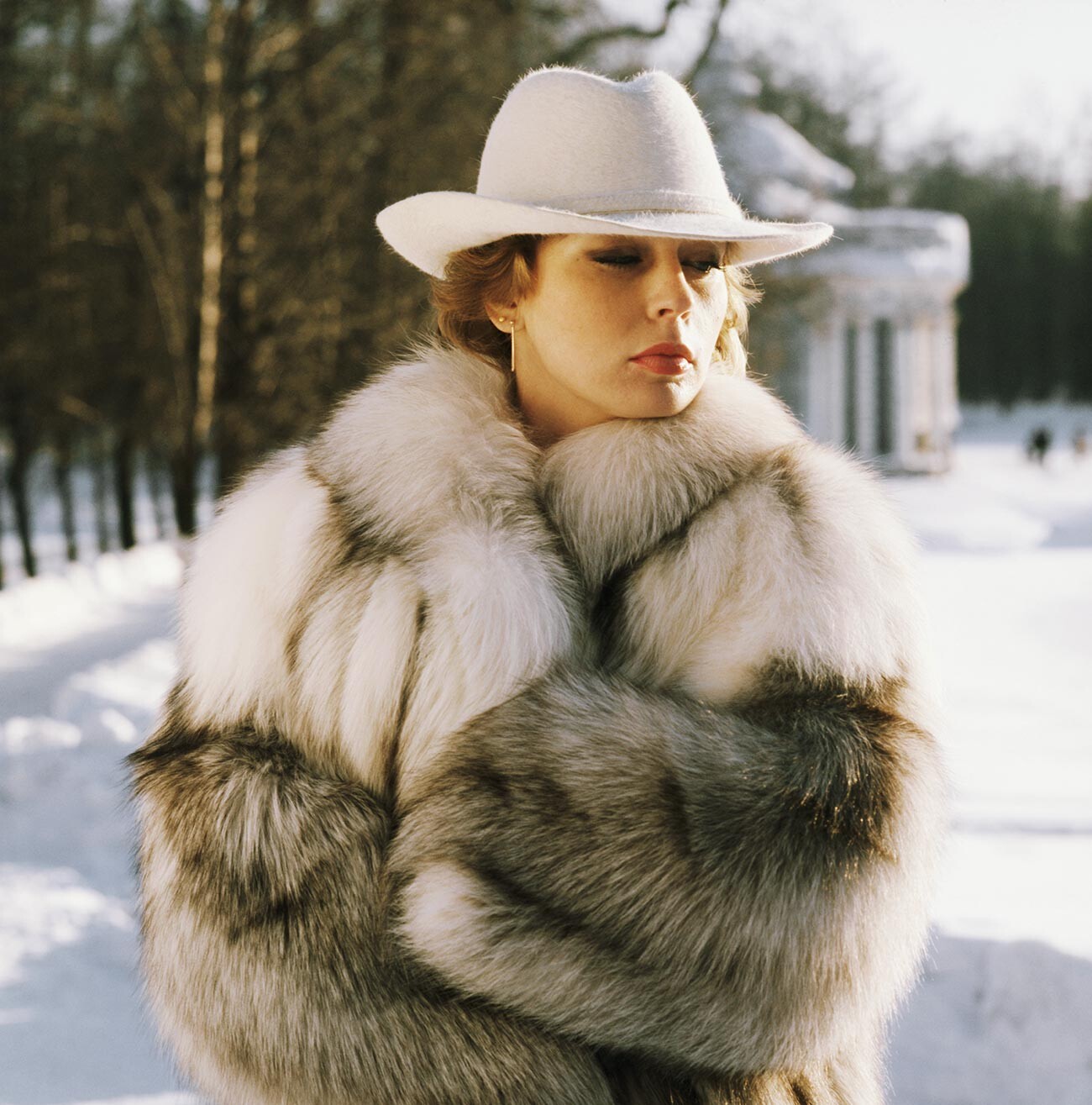 A Soviet woman in a fur coat (shuba)

Meanwhile, a good ‘shuba’ (long fur coat) could cost 2-3 monthly salaries – school teacher Leonid Lipkin wrote in 1972 that his mother was going to buy a shuba for 700 rubles – about six or seven schoolteacher’s salaries…

An expensive set of Soviet furniture.

“Now I have an apartment, luxury furniture, a Czech mahogany wood furniture set, a refrigerator, a piano, a secretary, a washing machine,” actor Valeriy Zolotukhin wrote in 1968 after making it big in Moscow. He was obviously proud of all the stuff ordinary people couldn’t get at a moment’s notice.

READ MORE: What did people stand in line for in the USSR?

Again, furniture sets were so scarce that people were on waiting lists for months. “In May, we may get a ‘Tatiana’ kitchen set; our number [in the line] is 1790,” wrote Ivan Seleznev in April 1974. “Recently, the 1,000th customer in the same waiting line received his furniture set.”

Even a decent cupboard – wooden, with polished veneer and glass-glazed shelves – was considered an item of wealth starting from the 1950s and into the 1980s. And, inside these cupboards, a compulsory set of crockery was to be placed, another indispensable part of a “wealthy” Soviet apartment. 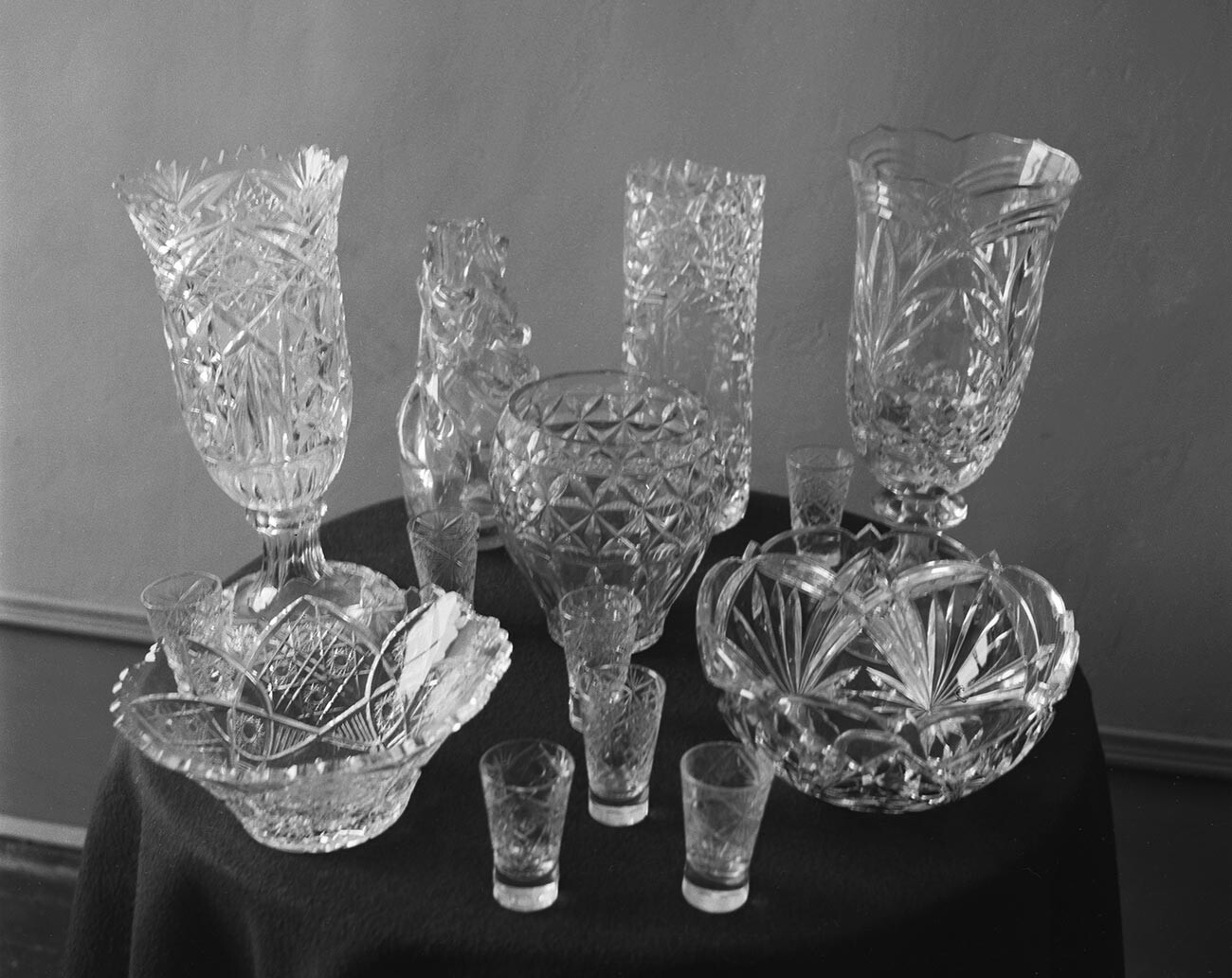 “Aunt Zina gave me a tableware set. It’s so beautiful. And Mom said that this set will be my dowry for the wedding,” young Elena Torbenkova wrote in 1970. Yes, a tableware set – crockery or crystal – could count as a “dowry” for ordinary Soviet citizens, but not only that. In 1981, writer Alexander Markov received a crockery set… for his 50th birthday from a writers’ organization!

Crystal tableware sets were a favorite way of asset placement of a novice Soviet philistine (or rather philistines - such purchases were made, as a rule, by women). The Soviet ladies bought them so much that all the flea markets of the country couldn’t sell any more until now! 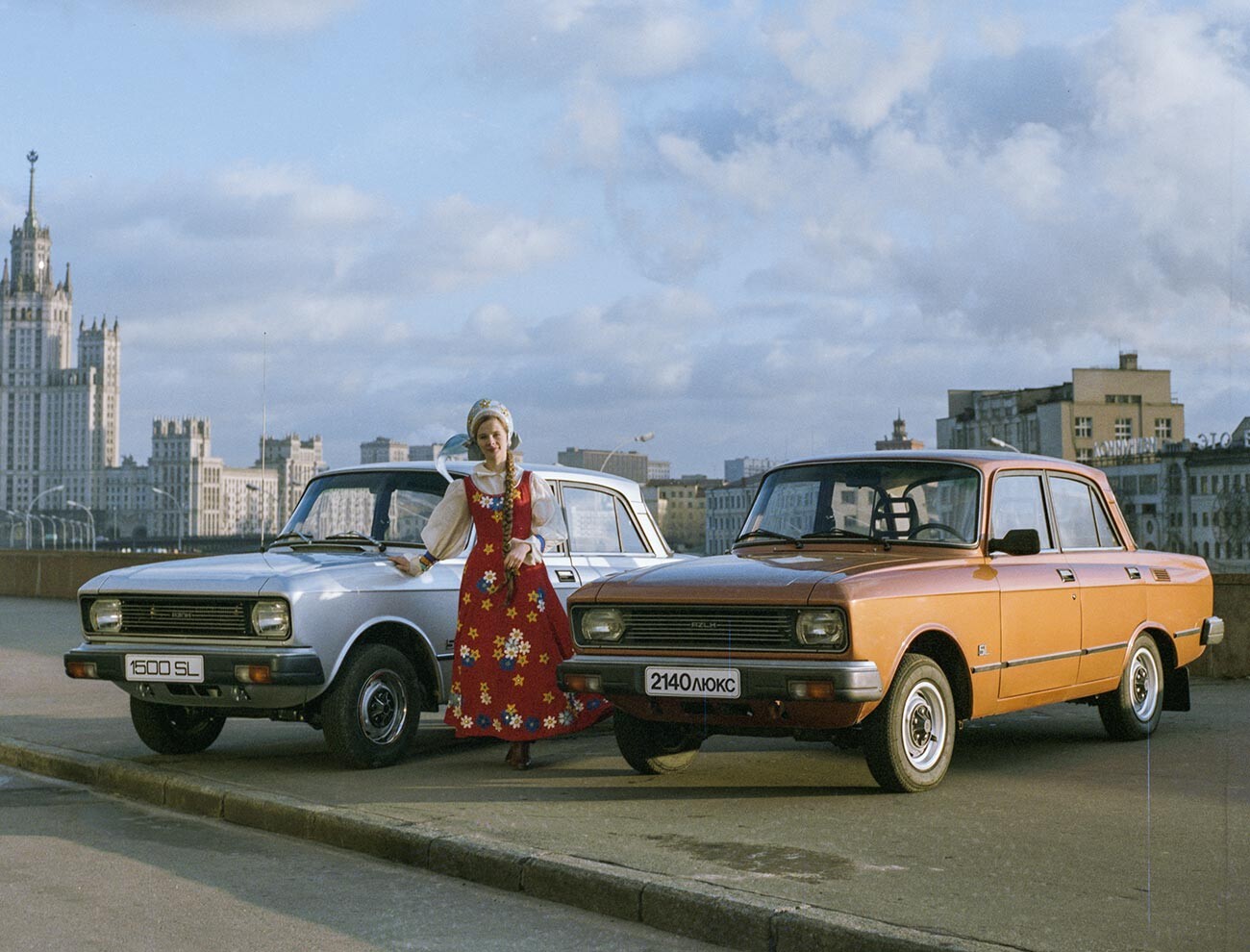 A private car was the culmination of a dream for most of the Soviet people. But, with a salary of 125-150 rubles a month, an ordinary Soviet engineer would have to work for 2-3 years (!) to buy a standard Lada. Viktor Barkunov, a journalist, remembered that, in 1978, a ‘Zhiguli’ sedan car cost 5,500 rubles. 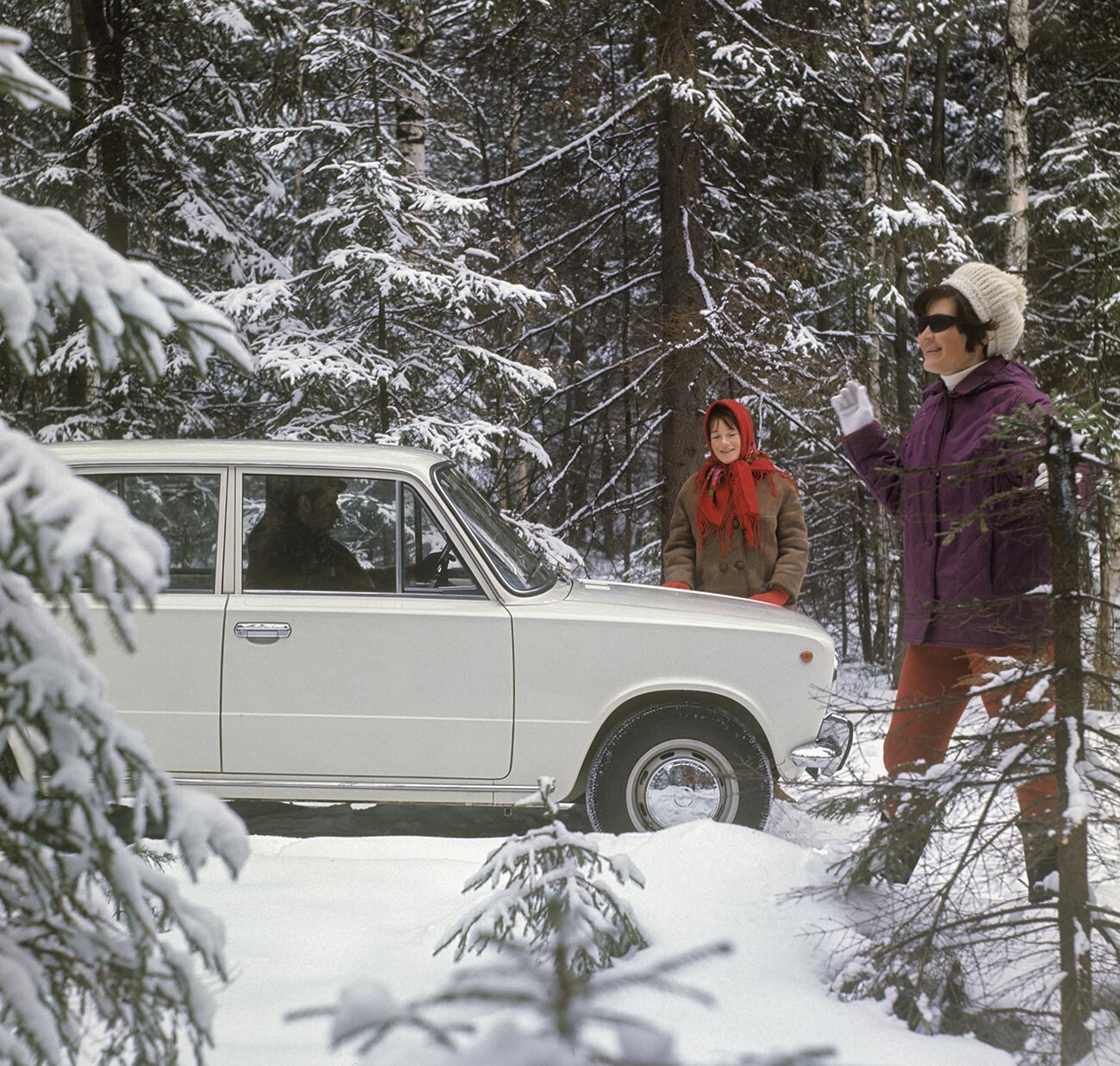 To buy it, Barkunov had to get written permission from his place of work and bribe an official with two bottles of vodka, two sausages and two cans of fish. Eventually, he managed to get a ‘Moskvich’ (a less comfortable car), but for 6,700 rubles!

* * *
In these conditions, it’s no wonder that Soviet Communist Party officials held on so tightly to their posts and their social positions. Writer Mark Popovsky thought that the situation of constant food and goods shortages was, in fact, not a “bug” of the system, but, on the contrary, one of its key features!

“This universal deficit is not a disadvantage, but a FOUNDATION! Imagine that tomorrow the shops are full of caviar, shoes, cars. Tell me, would an civil servant of the Central Committee, who does his stupid, lackey work, who, with a heavy head, with a sick stomach overcomes an avalanche of papers every day, so would he sit in the Central Committee or in the Council of Ministers, if, after leaving for another job, he could get the same caviar, the same sheepskin coat, the same car? Would many people, knowing that there is plenty of everything in stores, do what they do at the current level of... education? No!

“And so – the deficit. There is caviar, but only for the privileged. Would you like to [have some also]? You are welcome! But please lick the boss’ behind for this. Sheepskin coat? A business trip abroad? You are welcome! But only as a reward for submission. And for such an order to be maintained indefinitely, a deficit is needed. The deficit is well thought out, it is being created persistently. Our development is being held back, not stimulated.”