Why do the flags of Slavic countries look alike? (PICS) 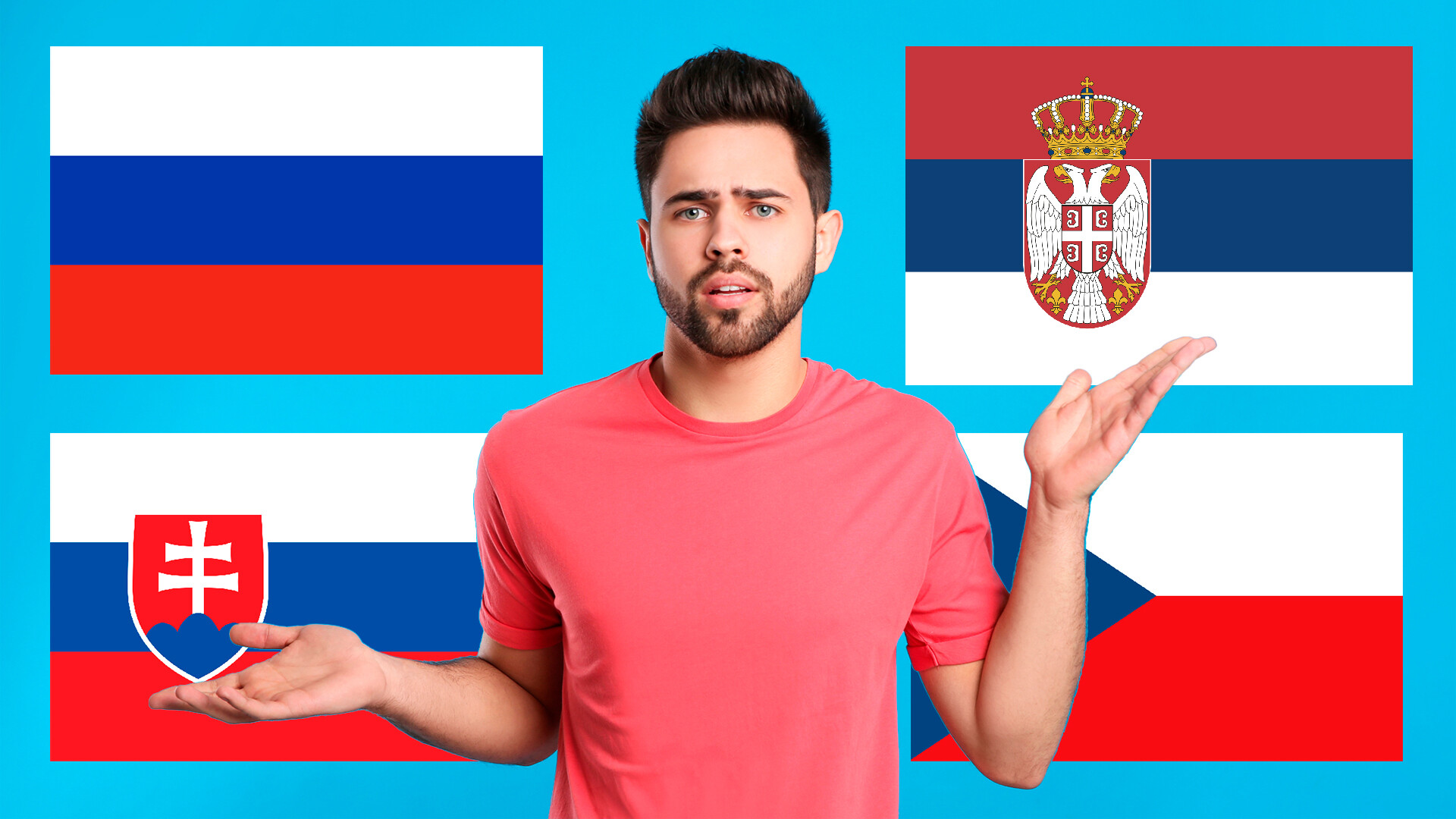 Russia Beyond (Legion Media, Public Domain)
It may seem that the flags of Serbia, Croatia, Slovenia, Bulgaria, the Czech Republic and Slovakia are all based on the Russian flag. But, in fact, each of these flags has its own history.

Foreigners often confuse the flags of several Eastern and Southeastern European countries with the Russian flag. The reason for this is that the same color pallette is used on the flags of these countries - white, blue and red (in different order).

These colors are often referred to as ‘Pan-Slavic’. They have become unifying elements of the Slavic states, just like the Scandinavian cross did for Finland, Iceland, Norway, Sweden and Denmark.

In addition to multi-colored stripes, the mandatory elements of the flags of Serbia, Croatia, Slovenia, and Slovakia are the coats of arms of these states. 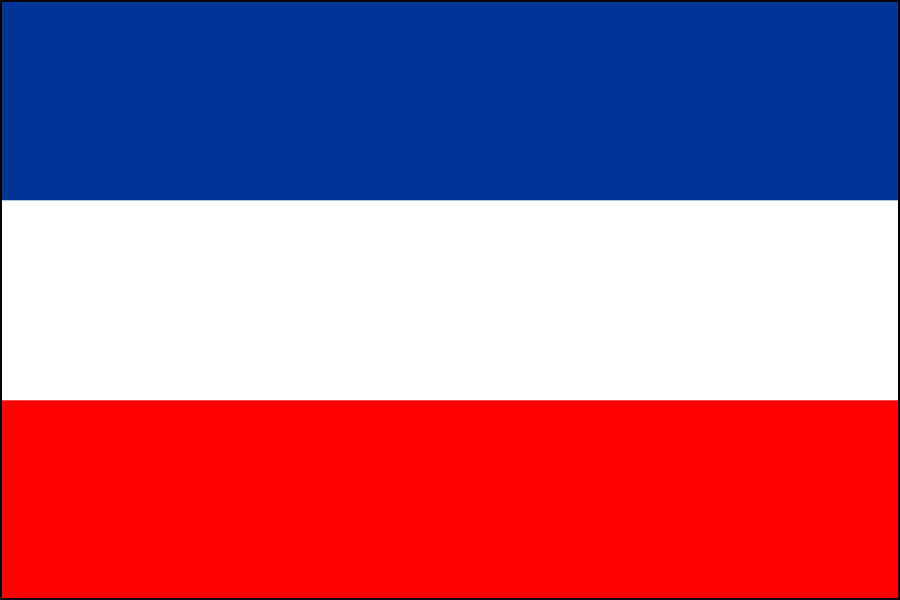 The Pan-Slavic Congress of 1848, where these colors were officially adopted, is considered an important milestone in the formation of the ideology of Pan-Slavism in Europe. Historians, in particular the Chairman of the Heraldic Council under the President of Russia Georgy Vilinbakhov, believe that the congress members decided to use the Russian white, blue and red flag as the basis for the flags of their liberation movements.

However, at that time, Russia officially had a different flag - black-yellow-white - while the white-blue-red tricolors (though in different patterns) were used among the Slavic peoples as national flags even before the epochal congress. 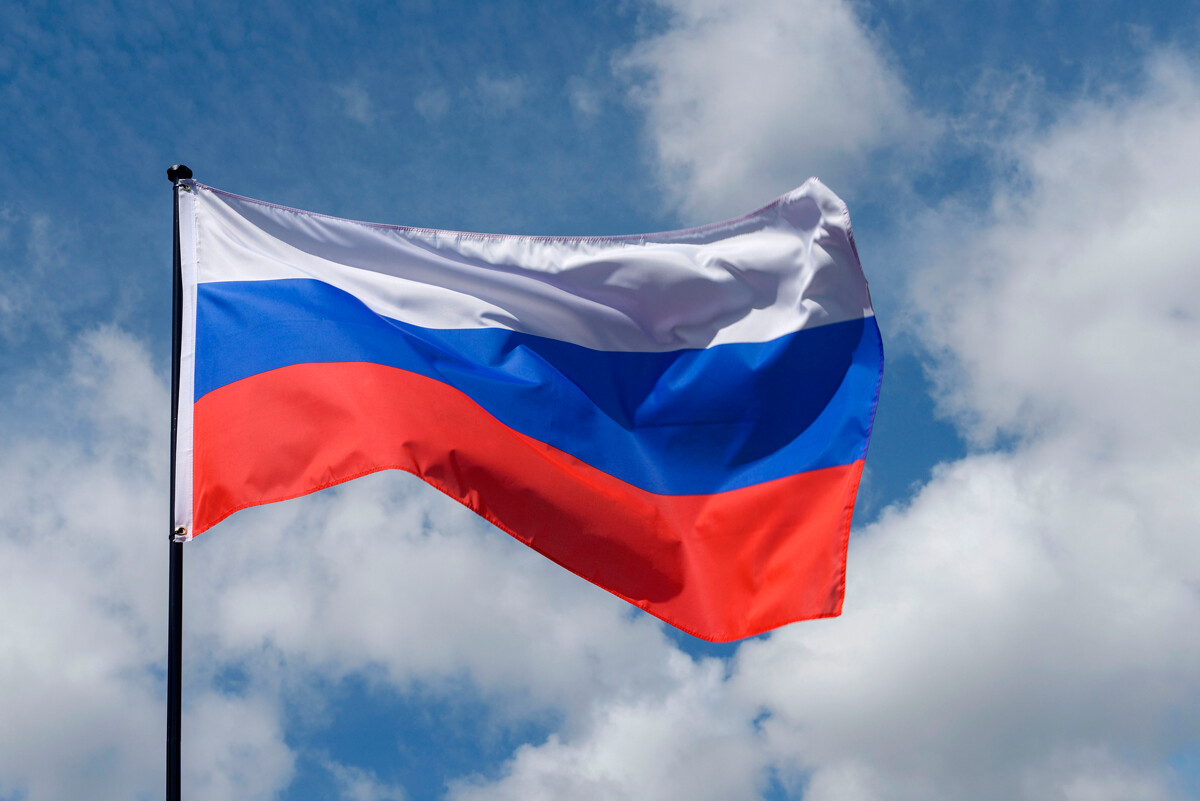 Experts consider the Russian flag’s year of birth to be 1668 (during the reign of Tsar Alexei Mikhailovich) when the first Russian warship named ‘Eagle’ used a prototype of this tricolored flag. The white, blue and red flag was also used under Peter I’s reign. In 1693, the 12 cannon yacht ‘St. Peter’ raised the “flag of the Tsar of Moscow”, decorated with a golden two-headed eagle.

On January 20, 1705, Peter I issued a decree ‘On the flags used by merchant river ships’, according to which such a tricolor should be used on merchant ships. The ships contributed to the fact that these colors became associated with Russia in other countries. In 1885, Emperor Alexander III declared the flag of Russian trade ships to be white, blue and red. 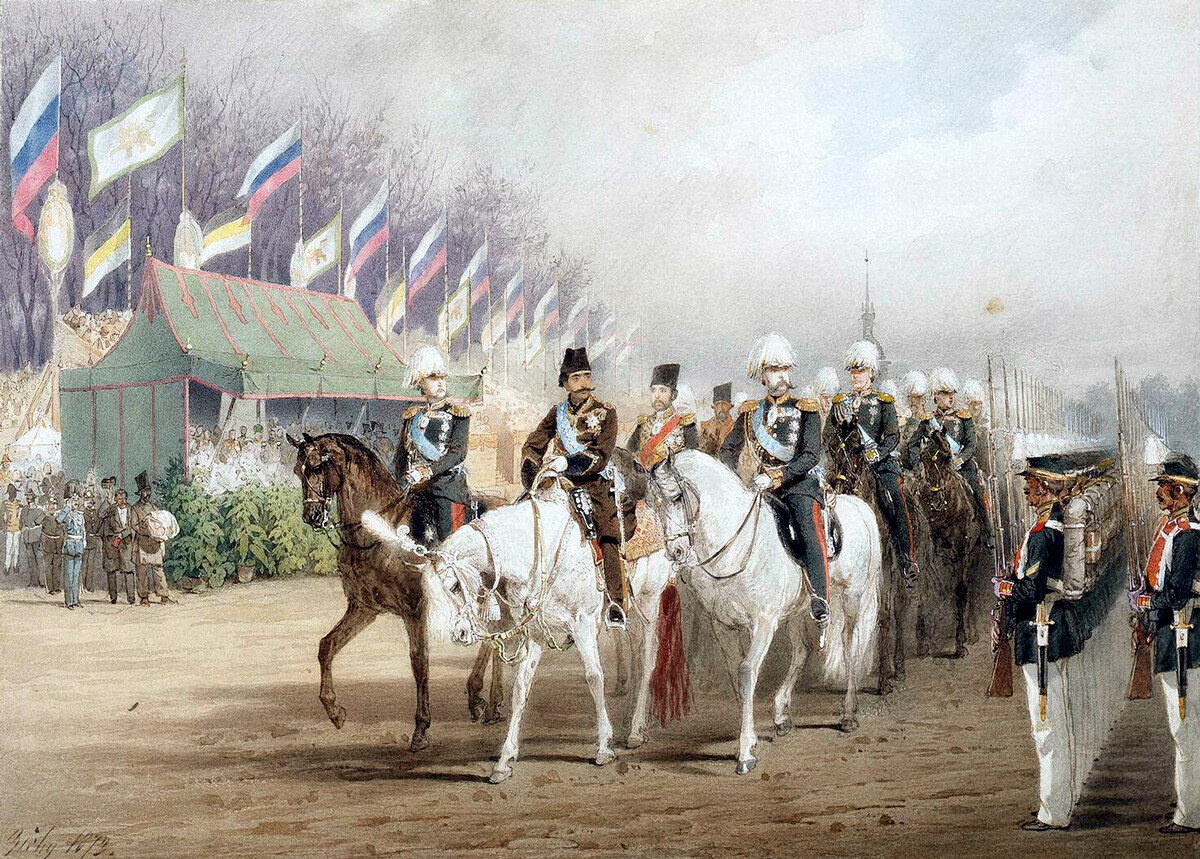 Alexander II and Shah Nasr ad-Din during a parade in the Tsaritsyny Meadow. 1873, M. Zichi.

Meanwhile, in 1709, a black-yellow-white flag appeared on the standard of Emperor Peter I, which began to be used in state ceremonies. A century and a half later, in 1858, it was approved officially and the white-blue-red one continued to be used by merchant ships. The flag that we are now all used to acquired its official status under Nicholas II, who, in 1896, abolished the imperial black-yellow-white flag. 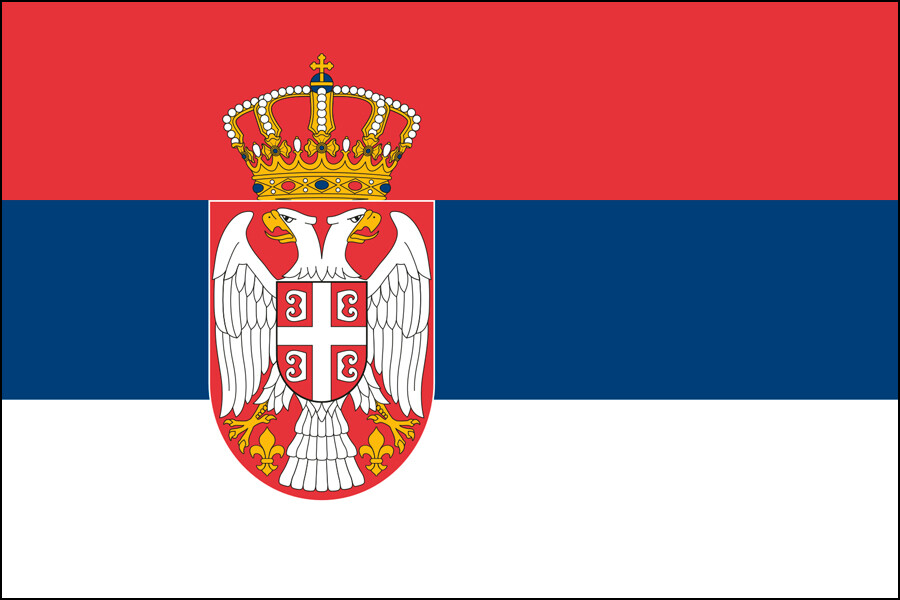 In 1835, the Principality of Serbia, recognized as autonomous by the Ottoman Empire, adopted a constitution in which the Serbian flag was described as a red, white and blue flag. Such a pattern caused criticism and provoked comparisons with the flag of France. So, in the same year of 1835, it was decided to return to the red, blue and white tricolor.

A similar pattern of colors - following the example of Serbia - was used by the Principality (later known as the Kingdom) of Montenegro.

Many Serbs believe that their flag is an inverted Russian flag, since it was Russia that made a key contribution to the independence of the Serbian people.

The blue-white-red was remembered once again when the Kingdom of Serbs, Croats and Slovenians (KCSS, since 1929 - the Kingdom of Yugoslavia) was established in 1918. It remained in effect until 2006, that is, during the existence of the Federal Republic of Yugoslavia and the State Union of Serbia and Montenegro.

However, the red-blue-white flag was also used. From 1947, it was the symbol of Serbia as part of Yugoslavia and then became the official symbol of the present-day country. 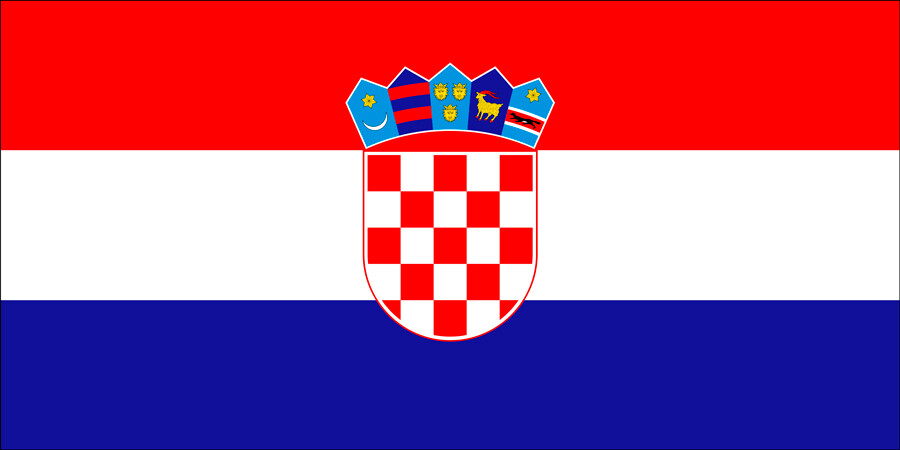 In Croatia, the colors widely used by the people and which have become traditional - red, white and light blue - received official status in 1848, when commander Josip Jelačić was proclaimed Ban - the ruler of Dalmatia, Croatia and Slavonia. This happened during the revolution of 1848-1849 in Croatia, at the time of which the national tricolor became a symbol of national identity. Later, it was in this order that the colors were transferred to the flag of the CCCC and also represented the flag of the Croatian territory within the successive state formations in the twentieth century. The red, white and blue tricolor is still the symbol of Croatia today. 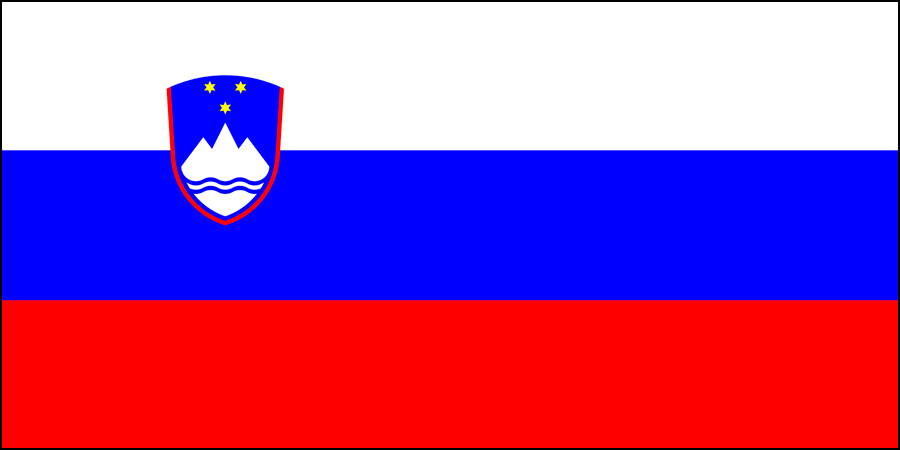 In Slovenia, the tricolor, which is almost exactly the same as in Russia (except that the blue color of Slovenians is lighter), appeared in the times of the Duchy of Kranj, an old iteration of the present state within the Holy Roman Empire and later Austro-Hungarian Empire.

However, Russian historian Georgy Vilinbakhov notes that the Slovenian flag in its present form was adopted in 1848 at the Pan-Slavic Congress “and was copied from the Russian one”.

Flags of the Czech Republic and Slovakia 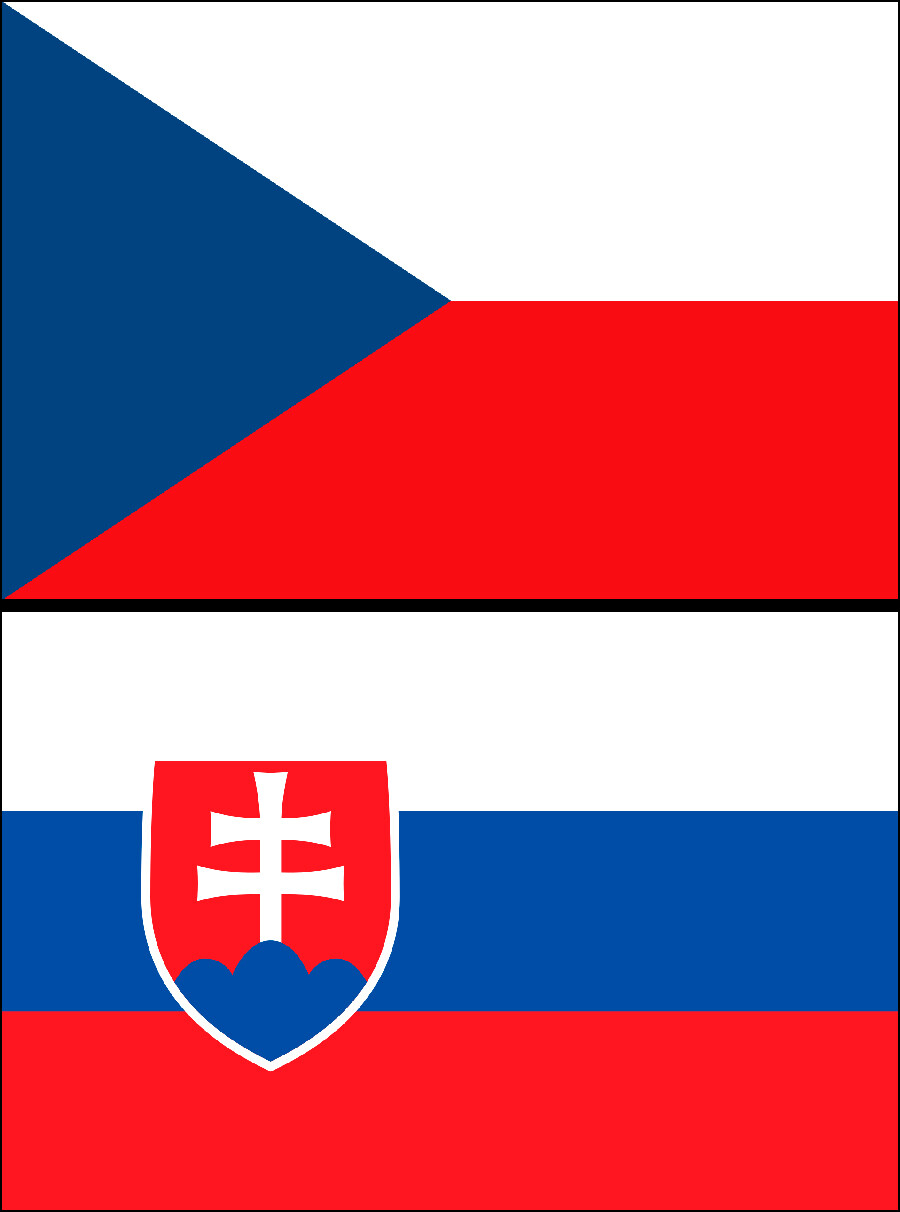 In Slovakia the white, blue and red tricolor dates back to the revolutions of 1848-1849, when Slovaks opposed the Hungarian crown. It became the official symbol on September 18, 1848, and was used on the territory of Slovakia, which was a part of different state formations in the 20th century.

It is believed that the blue color (which is slightly lighter than the one on the Russian flag) was borrowed from the Russian and Croatian flags (the Russians were considered patrons of the Slavs, the Croats - a brotherly nation, “neighbor to Hungary”).

Since the 12th century, the coat of arms of the Czechs has been white and red. In 1918, with the formation of Czechoslovakia, a blue triangle was added to the left to represent Slovakia. After the division of the state in 1993, the Czech Republic inherited this tricolor and Slovakia returned the flag it had in 1848. 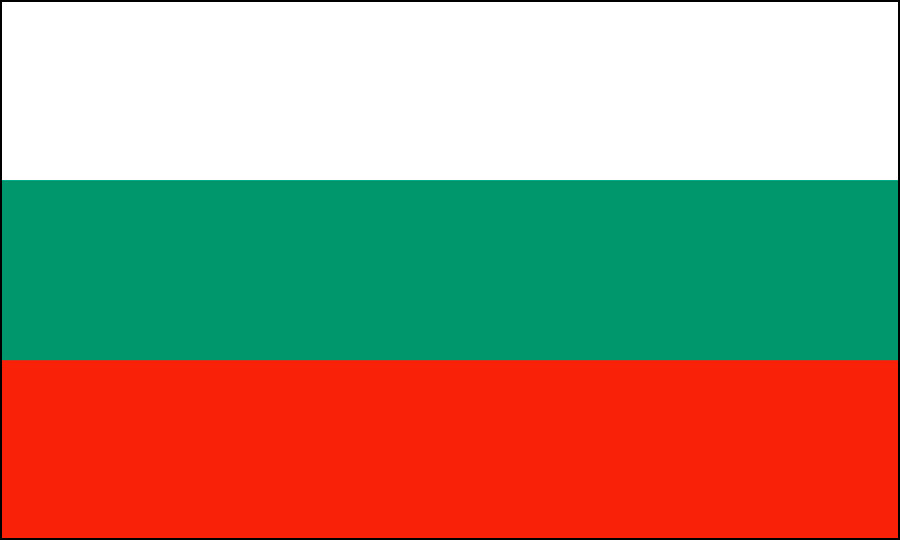 The colors of the Bulgarian flag slightly differ from the classical Pan-Slavic palette. Here green historically takes the place of blue. Nevertheless, in the history of Bulgaria, there was an episode when red, white and blue colors were used on its territory. During the Russian-Turkish war (1877-1878), Russian nuns of the Iversky monastery presented the Bulgarian militia with a Samara banner with a cross with the image of the Iberian Mother of God portrayed in the middle. 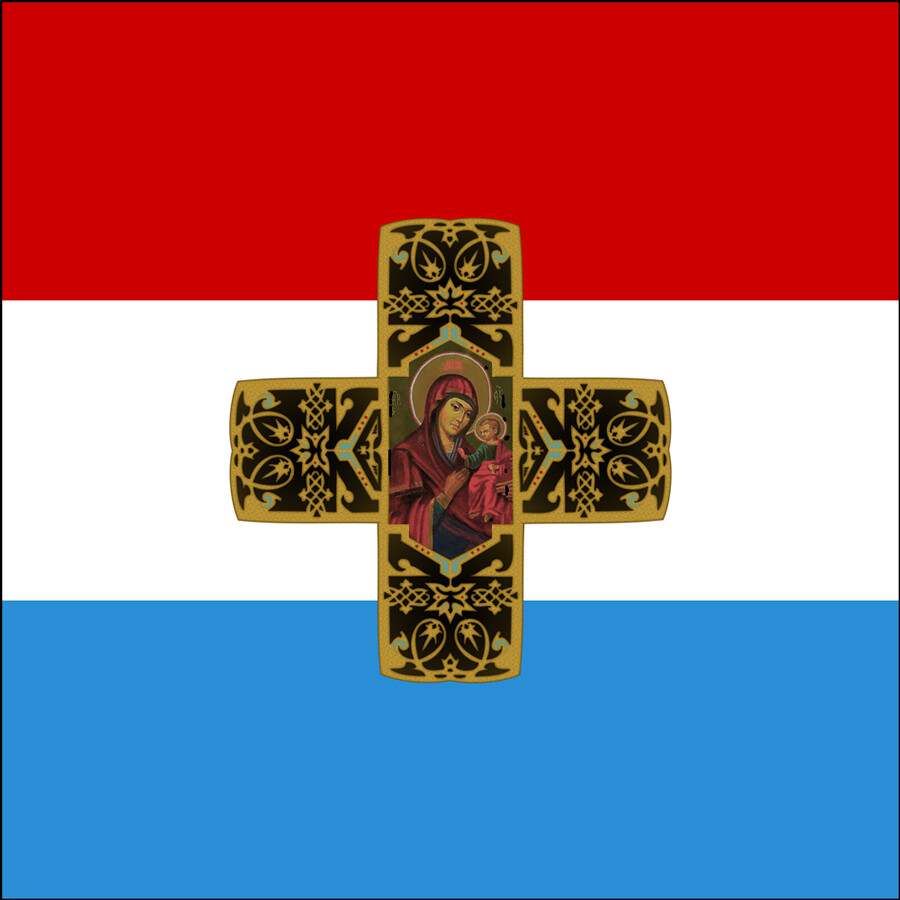 The flag became a national shrine and one of the symbols of the Bulgarian army; it was the only flag in the history of the country to be awarded the first Bulgarian Order of Courage. The soldiers took it with them into the battles of Stara Zagora, Nova Zagora, Shipka and Sheinovo. Since 1946, it has been kept in the National Museum of Military History of Bulgaria. By the way, the modern flags of Samara and Samara Region are the same as the old Samara flag.