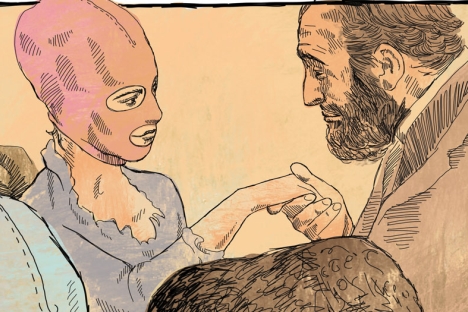 One of Russia’s more celebrated writers humorously dissects the hypocrisy of how westerners read about Russia, but encourages foreign readers to keep reading nonetheless

In Europe and the United States, contemporary Russian literature, by which I mean a continuation of the Russian classical tradition, is notable only by its absence.

Recently, a prominent German newspaper published an interesting list - the most significant works of the past seven decades, i.e. post-war writing which together forms the so-called European literary canon.

This “canon” seems to include pretty much everyone you can think of: However Russia is represented only by two works, Solzhenitsyn’s “Gulag Archipelago” and Pasternak’s “Doctor Zhivago.” Both were published decades ago, and neither of them will ever be seen as pivotal moments in modern Russian literature.

On the whole, contemporary Russian writers are only of peripheral interest to foreign readers. And actually Russia itself is peripheral and uninteresting too, but very big. This was where the terrible Soviet Union once was.

Then along came Gorbachev the good-guy (it should be noted that he is hated by 99 percent of the Russian population). Then Yeltsin, drunk but quite nice (9 out of 10 Russians despise him too). And now there’s Putin.  Putin speaks German and pretends to be very scary and terrible (when of course he actually isn’t).

Whatever the case, in terms of culture, Russia appears to have been placed in the same category as some underdeveloped, backwater country.

A case in point is the phenomenon of writer Nikolai Lilin and his popularity in the West.

His works  (“Free Fall; A Sniper’s Story” and “Siberian Education”) are truly impressive for their triteness and the sheer quantity of outright lies, nevertheless, this man is a favorite among some Western readers in Europe and the United Kingdom.

Needless to say, Lilin has never set foot in Chechnya or a Siberian prison, but, following in the footsteps of Baron Munchhausen, this does not stop him spouting a load of exorbitant cock-and-bull stories – and everyone, at least nearly everyone, laps them up!

And his rise is actually fully in keeping with the Russian literary tradition – whereas beforehand immortal con-artists like Gogol’s Khlestakov and Ilf and Petrov’s Ostap Bender pulled the wool over the eyes of idiotic officials and thick Soviet bureaucrats, these days it seems naïve Western readers and Hollywood directors are the ones being taken for a ride.

Wild and uncivilized as Russia may be, it is still highly unlikely that a book by a contemporary German writer about a squadron of former SS officers hiding in the forests outside Berlin, listening to Wagner with their children and grandchildren, reading aloud from the works of Junge and banging on tin drums as they rob passing trains, would ever be published here.

Or let’s imagine some French writer comes to Russia, and, at the ripe old age of 22, this guy starts telling everyone about how he served as a sniper in Algeria, then as a bomber in Iraq, where he personally managed to take one of Saddam Hussein’s sons hostage - and then writes about all this in his book where a valiant French commando perform incredible feats (while munching on frogs), and then people in Russia publish it and gush: “The author is holding up the mantle of Dumas and Saint-Exupery.”

Well this just wouldn’t happen. Everyone here would immediately see this drivel for what it is.

But back in Europe, strange things can happen. Plenty of second-rate books make it to print, and the most popular still seem to be this load of nonsense that no one in his right mind would ever bother reading in Russia.

My books have been translated into 14 different languages, but I would never dream of calling myself a writer of European renown – the fact that I am published abroad seems like some sort of ongoing mistake, albeit one that is interesting for a narrow circle of academics and the few intellectuals who are still interested in Russia.

{***From Pussy Riot to Alyosha Karamazov***}

From Pussy Riot to Alyosha Karamazov

But after observing the western publishing industry and how Russian literature is promoted, I have some idea how Russian writers might appeal to a mass audience.

Whatever the book is about, the blurb on the back cover needs to include sentences along the lines of: “This writer is the son of Alyosha Karamazov.” “He is the brother of the Pussy Riot girls.” “Anna Politkovskaya loved this book.”

I am not saying success would be completely guaranteed, but the cover would certainly catch the eyes of hundreds if not thousands of potential readers who would then flick through the pages to find something about Pussy Riot and how Putin killed Politkovskaya.

I apologize for any offense this may cause – but a few things need to be put straight.

Anna Politkovskaya is an absolutely wonderful woman – a genius. We worked at the same newspaper, although we never got to each other. Her death was a tragedy for me personally, and modern Russia is much worse off without her – she set an almost unattainable benchmark in terms of honesty, determination and the relentless pursuit of justice.

But Politkovskaya is more renowned in the west than she is in Russia, and for many ordinary Russians she has simply slipped beneath the radar. Her name has more influence in the west. And it is very odd that Politkovskaya’s opinion should be a criterion by which a Western reader gauges the importance of a book by a Russian writer.

It would be just as strange if a contemporary German writer was revered because of this association with a dissident from the east who disappeared under unexplained circumstances--someone who would certainly not have had time to read the book he is now advertising.

In this instance the story of Pussy Riot is even sadder.

I’m bound to offend you even more, but, while being fully aware that the harsh punishment was grossly out of proportion to the crime that was committed, most citizens of Russia, including the intelligentsia – genuinely consider the poor girls’ actions to be absolutely disgusting from both the ethical and aesthetic point of view.

I doubt very much that there would have been so many fearless advocates of the girls’ behavior in the west had they staged a deliberately inflammatory dance and taken their clothes off in front of the Pope. But I repeat - this does not justify the brutality of the Russian courts in any way shape or form.

I do not know what you think about the situation, but for us here it is clear that Alyosha Karamazov [the youngest and most sensitive of the brothers portrayed as a witness to events.] Karamazov and Pussy Riot represent polar opposites in terms of their outlook on the world.

You might remember that Dostoevsky wrote about another character, one who went by the name of Smerdyakov? He was also one of the Karamazov brothers, but an illegitimate one. If you recall the novel, this character may well shed some light on the situation we have at the moment.

Today Russian literature is tormented by premonitions of the apocalypse, and is trying to reinstate a literary tradition that has now been almost completely lost.

Russian readers (and also Russian writers) are sick and tired of mockery, base idiot savants, and unrelenting parody.

Westerns readers loved classic Russian literature for the world it portrays – a place where there is an inexplicable yet resolute sense of the divine; idealism free of dogma and didacticism; and a firm conviction as to the existence of good and evil.

Any Great Russian writer is a conservative. They tend not to be renowned for their tolerance, and generally they are quite strict types, and the same goes for non-Russians too. I recently read a letter written by my favorite author, Thomas Mann, who wisely pointed out that, “There is something sad about self-flagellation and denying the greatness of Germany.”

I would like to apply these words to modern Russia.  I would say there are several authors who are inspired by Great Russian literature.

A number of writers born around 1970 seem to be doing great things: Mikhail Tarkovsky with his Siberian stories; Alexander Terekhov who wrote the great novel “The Stone Bridge”; Dmitry Bykov who brought us the epic works “Justification” and “Ostromov”; Alexander Kuznetsov-Tulyanin, who wrote what is undoubtedly a classic saga, “Pagan.”

I am more than certain that Russian masters of an older generation, including Andrei Bitov, Valentin Rasputin and Eduard Limonov would be very serious contenders for the Nobel Prize for Literature. But of course this is not for us to decide, and these things are always easier said than done.

Historically, Russian literature has always come to Europe propelled by Russia’s more bombastic expansionist policies. First the Cossacks in Paris, the partition of Poland and Russia’s reputation as the “gendarme of Europe” –and then along came Dostoevsky and Turgenev. Then there was the Russian space drive, the Gulags and Russian tanks in Hungary – which was then followed by Mikhail Bulgakov and Mikhail Sholokhov’s appearance on the European literary scene.

It would be nice, of course, to be able to do without tanks and Cossacks – it would be good if we could read each other just because we like each other, and because we write quite good books.

Zakhar Prilepin is one of Russia’s more celebrated writers whose books are translated in about 14 different languages.