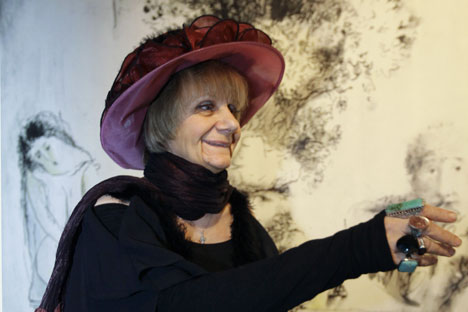 Ludmilla Petrushevskaya’s collection of scary stories “There Once Lived a Woman Who Tried to Kill Her Neighbor’s Baby” was a New York Times bestseller. Source: RIA Novosti.

Earlier this month, the Russian Booker prize announced this year’s shortlist. It is hardly surprising that three out of the six finalists were women; half of all contemporary Russian authors are now female, and publishers say they regularly outsell their male colleagues. But this is a relatively recent phenomenon. With a few exceptions, like the poets Marina Tsvetaeva and Anna Akhmatova, men have traditionally dominated the Russian literary canon.

The Russian Booker was founded in 1992, but was not awarded to a female author until 2001. Ludmila Ulitskaya, who scooped the prize with a novel called “The Kukotsky Case,” is now a grande dame of Russian letters with numerous award-winning novels to her name. In the wake of writers like Ulitskaya and Tatyana Tolstaya, things have changed fast, with women gaining increasing recognition in Russia and abroad.

Ludmilla Petrushevskaya’s collection of scary stories “There Once Lived a Woman Who Tried to Kill Her Neighbor’s Baby” (Penguin, 2009) was a New York Times bestseller.

Olga Slavnikova, whose novel “Light-Head” is on this year’s Russian Booker shortlist, is another celebrated novelist, famous for her distinctive dark comedy and hints of magic realism. Slavnikova won the Booker, six years ago with her dystopian fantasy “2017” (Overlook, 2010) and has helped encourage new writers as director of the Debut Prize.

She describes the work of this prestigious award for young writers: “seeking out a new generation of literary talent – and finding it. Debut winners demonstrate remarkable creative independence and a genuine commitment to art.”

A new compilation of works by Debut’s women writers, published in English last month, suggests that the success of contemporary women writers has inspired younger authors to contribute to this literary renaissance. Somewhat unimaginatively titled “Still Waters Run Deep,” the new anthology showcases a varied range of talents. Slavknikova describes them as young women “who have grown up over the past two decades in a fast changing and often hostile world.”

Irina Bogatyreva, whose travel memoirs have already been published in English in the compilation of hitch-hiking stories “Off the Beaten Track” (glas, 2012), kicks off the collection with an intriguing short story about identity. “Universum” describes a lonely girl who takes over the living space, and ultimately life, of a boy she is obsessed with. Bogatyreva packs a lot into thirty pages, including some subtle observations on the construction of gender roles.

As the heroine, Makha, becomes more like her guru, Max, she stops noticing the domestic chaos that her initial instincts “as a woman” had wanted to sort out. Bogatyreva’s second story, another hitchhiking tale, also deals with this theme. An androgynous, first-person hitcher is surprised by overtures from a driver since on the road she “invariably forgot what sex I was and all matters relating to feminine allure.”

Some of the writers inhabit male narrators, who can live more freely.

In other stories, by contrast, young women struggle with narrow models of existence, reinforced by deprivation or envy (as in playwright Yaroslava Pulinovich’s dramatic monologue, “Natasha’s Dream”) or illness, like Victoria Chikarneeva’s dying teenager in “I Only Wanted to Live.” The narrator of Chikarneeva’s second story recalls her life while trapped inside a zinc-lined pipe.

The metaphorical restriction is explicit: “As a small child I had already begun crawling into my pipe. Adults taught us what we could and couldn’t do.”

Not the revolution any more

One of the most accomplished new writers is acerbic and cynical Anna Babiashkina, whose award-winning novel “Before I Croak” is also due out in English soon. It tells the story of a group of older women, trying to realize their literary ambitions in a suburban Moscow nursing home.

Like Slavnikova’s “2017,” Tolstaya’s “Slynx” (NYRB Classics, 2007) and others, the novel is set in the future, but where the older novelists’ satirical targets are more political, Babiashkina’s are personal and social. There is a post-feminist undercurrent to the writing, in which women are responsible for their own problems, culprits as well as victims.

Babiashkina is editor of a women’s magazine; the young women in her short stories can be TV producers, PR directors, purchasing managers, realtors or marketers.

Their creative frustrations are a common theme; they envisage glamorous roles for themselves, “midway between Cinderella and Scarlett O’Hara.” The heroine of one ironic fable models herself on 1920s femme fatale, Lily Brik, who preached the virtues of flattery and silk underwear. Lily Brik was the lover of handsome avant- garde poet, Vladimir Mayakovsky. Babiashkina’s worldly wise protagonist settles for an overweight advertising executive, a man who incarnates post-Soviet aspirations.

“He wasn’t Mayakovsky of course,” writes Babiashkina, “but after all, this wasn’t the revolution any more.”

The Time of Women

Russia’s painful twentieth century history continues to be a theme for women writers. Elena Chizhova won the Russian Booker in 2009 with “The Time of Women” (Glagoslav, 2012), a poignant story of female resilience, about three old women bringing up a mute, orphaned girl in a Leningrad communal apartment. The girl’s interior monologues behind her silence and the grandmothers’ difficult lives and memories of resistance all tell powerful alternative narratives.

Alisa Ganieva and The chronicles of Dagestan

Ksenia Zhukova’s “Twenty Letters from the Twentieth” (published in “Still Waters”) also invents a series of moments that span the decades. Zhukova’s epistolary structure and jumbled chronology are reminiscent of the patchwork of documents in Ludmilla Ulitskaya’s “Daniel Stein. Interpreter” (Overlook, 2011).

Ulitskaya’s novel, with its virtuosity and compassion, won the Big Book Prize in 2007.

Several of Ulitskaya’s earlier works are also available in English, often dealing with family life and the need for tolerance. Russian-born American novelist, Gary Shteyngart, said in a review of Ulitskaya’s “Sonechka” (Schocken, 2005) that the women she wrote about were: “unlike any you have met before. They are charming, intelligent, seductive, and strong enough to carry an entire dysfunctional country on their backs.”

It is hard to predict which particular women will carry Russian literature further forward into the twenty-first century, but readers can confidently look forward to more great novels from a country famous for its literary traditions.

Elena Dimov, a lecturer in contemporary Russian literature, wrote in a recent article for the University of Virginia’s library: “For the first time in history Russian women writers are up to the challenge. They embody important philosophical, moral and social questions in their works.” Their answers represent “a clear and refreshing voice of hope and optimism.”