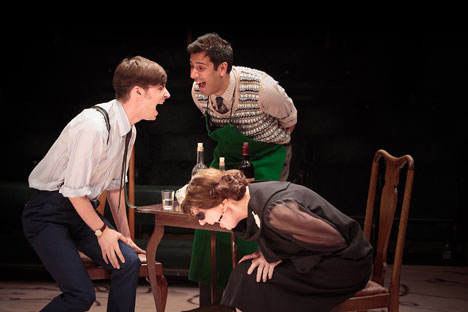 New texts and productions bring fresh life to master satirist of middle-class morality—but he is still not easy to produce in the west.

The censor’s report on Alexander Ostrovsky’s first full-length “A Family Affair” read: “All the characters are first class villains, the dialogue is filthy, the entire play is an insult to the Russian Merchant Class.”

The Tsar banned the play, but later his status was assured and his work is still topical and entertaining. Today he is one of Russia’s most popular and often-performed playwrights.

So why have most of us in the west never heard of him?

Jacqui Honess-Martin, who recently directed the English language premiere of Ostrovsky’s “Bespridannitsa” (“Girl with no Dowry” or “Fiancée without Fortune”) at London’s Arcola Theatre, has several possible answers: “British theatre doesn’t do a lot of foreign classics,” she explained. “It tends to be Ibsen and Chekhov and that’s about it. We’re very comfortable doing about the remote upper classes; we’re not so comfortable doing drama that criticizes the middle classes. Ostrovsky is also very difficult to translate. He wrote in a very specific idiom for his time, very colloquial and challenging to put into English.”

Renamed “Larisa and the Merchants,” -Martin’s recent production was an intense and passionate satire focusing on the economic pressures which force Larisa to choose a husband in the brutal world of the rising mercantile class. Honess-Martin said: “it is a huge experiment doing Ostrovsky in this country because people don’t know who he is.” But she emphasized that his work has plenty to say to western audiences.

In the U.S., Ostrovsky is no Chekhov

American theaters are still struggling in their efforts to bring Ostrovsky to new audiences. In 2010, Ostrovsky was produced in New York. "Ostrovsky has mostly retreated to the textbooks outside of his own country," Charles Isherwood said in The New York Times. "Hats off, therefore, to Classic Stage Company’s production of “The Forest,” one of Ostrovsky’s better-known comedies, performed by a talented cast led by Dianne Wiest, who plays the miserly mistress of a large estate, and John Douglas Thompson (“Othello,” “The Emperor Jones”) as her nephew, an itinerant actor who comes to pay a visit."

Unfortunately, the show was not a hit at all—quite unlike many Chekhov productions. "The production is a commendable attempt to shine a light into an obscure byway of the classical canon, but memorably moving or memorably funny it is not. It may be unfair to belabor the comparison, but you could plausibly label it Chekhov Lite." Isherwood said.

Discovering the triumph and tragedies of Russia's Shakespeare

This did not exactly open the way for more Ostrovsky, but a year ago, in 2012, an adventurous theater in New York called "Blessed Unrest" tackled "The Storm." In this production, many liberties were taken to create a contemporary and conceptual work. The review in Backstage was both positive and mixed.

The London stage, however, is beginning its own love affair with Ostrovsky.

“I first read this play in 2008 and it seemed very prescient,” -Martin said. “Ostrovsky seemed to give a stark warning from 150 years ago that value is not always about price; the play is a warning about what happens to society if you only focus on chasing money … I wanted to stage this play because I got tired of hearing politicians trying to put a price tag on things that I don’t think can be valued in that way. Ostrovsky was saying this is not a satisfactory way to run a society. It is cynical … All the characters, however cruel, are victims of their circumstances. There is a moment for each of them when the mask slips and you realize that there is a human being behind this cruelty.”

Sergei Ostrovsky, Pushkin House and former theater critic, was delighted to see this well-loved playwright staged in Britain. “This drama about a young woman surrounded by … the oligarchs of the day seems quite relevant in today’s London,” he said, “and the theme of a girl being bought and traded is also current in Russia. All the old morality and structures are mixed up now.”

Sergei Ostrovsky praised the new version by Samuel Adamson, which was “a pleasure to watch … snappy and modern without being silly about it” and reported some very positive reactions from Russian audience members, “who were excited to see a different version of a story they all grew up with.”

Honess-Martin added that foreign directors can bring something fresh to the Russian playwright’s works: “Freed from that cultural baggage, of what we did was new … it’s an extremely passionate and sexy play; it’s about power.”

Samuel Adamson’s new translation is available from Faber and Faber.

New productions of Ostrovsky’s “A Family Affair” and “ Clever by Half”, in Nick Dear’s translation, are scheduled for later this year in Cardiff and Manchester respectively.

A play 'Too clever by half' by Alexandr Ostrovsky, adapted by Rodney Ackland will run in Royal Exchange Theatre until August 17, 2013.