'Russia is mine!': The turbulent life of Sergei Yesenin 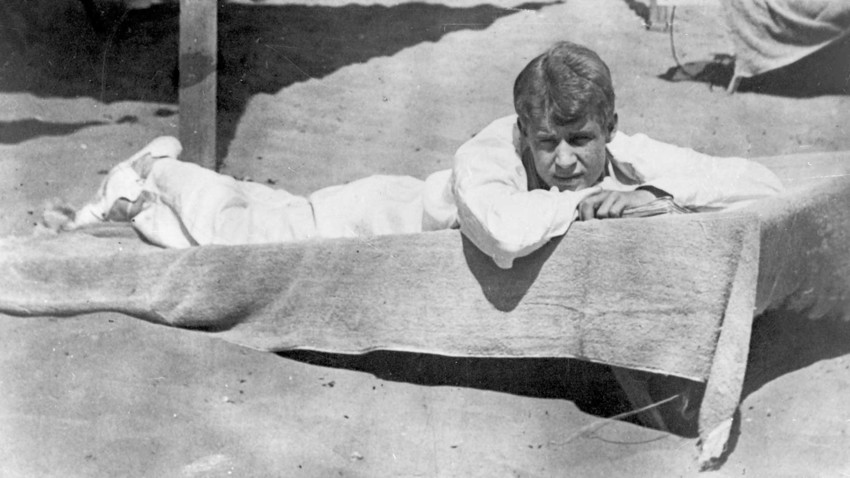 "My Russia, wooden Russia! I am your only singer and herald"

Sergei Yesenin was born in the village of Konstantinovo in Ryazan Region on Oct. 3, 1895. From the window of his house, he could see a church and the hilly bank of the Oka River – all of which he would often recall in his poems.

He began writing poems as a child, and when he left school, he headed to conquer the literary world of Moscow, where he published his first poems.

Soon, in search of fame, he moved to St. Petersburg, where he attended literary salons wearing traditional clothing, bast shoes or felt boots, with sheets of his poems wrapped in a rural headscarf.

The stunt – canny self-promotion in an age well before the PR industry – worked brilliantly, and the self-taught village poet with a mop of golden curls became incredibly popular. In 1916, he had the opportunity to perform to the family of Emperor Nicholas II.

"Infamy has come to me, / That I am an abuser and scandalmonger"

Yesenin also earned notoriety as a troublemaker. He was closely involved with the literary scene and often teased other poets. His best-known literary duels were with another famous poet, Vladimir Mayakovsky.

With his love of rural space, Yesenin did not accept his counterpart's revolutionary and industrial poems. Mayakovsky, however, urged him not to waste his talent describing nature and dedicate it to Bolshevism instead.

During a public poetry reading Yesenin told Mayakovsky that he would not give “his” Russia to him: "Russia is mine! And you are an American!" To that, Mayakovsky replied sarcastically: "Take it, here you are! Eat it with bread!"

"Many women loved me, and I loved more than one, too"

Love is the second major theme in Yesenin’s work. A handsome ladies’ man, the poet had four children from his numerous affairs. His first common-law wife, Anna, gave birth to a son, Yuri, in 1914, but Yesenin left his family for St. Petersburg and only rarely visited the child.

In 1917, he married the beautiful actress Zinaida Reich, who gave birth to a daughter, Tatyana, and a son, Konstantin. The separated two years later, and Reich soon married the renowned director Vsevolod Meyerhold, becoming one of Moscow’s most famous actresses.

The poet's second official wife was the American dancer Isadora Duncan. She was 18 years older than him and neither spoke the other’s language. Their marriage was full of endless scandals and lasted about two years. The poet accompanied Duncan on tour in Europe and America, where he would perform at parallel literary events.

Sofya, Yesenin's third wife, was Leo Tolstoy’s granddaughter. The poet married her a few months before his death, and this was also an unhappy marriage. "Everything here is too filled with the 'great old man,' it is choking me," Yesenin complained while living in Sofya’s home. It is Tolstaya who did a lot to preserve his legacy and left memoirs about him.

Yesenin greeted the 1917 Revolution with enthusiasm and the hope that Russia would be transformed, but he soon saw the hunger, destruction and terror in the country, and began describing apocalyptic scenes: "the garden of skulls" and "rabid glow of corpses."

In his long poem Pugachev – about the famous rebel and impostor who organized a mass revolt against Catherine II – Yesenin turns to the theme of confrontation between power and the people. The Land of Scoundrels, another long poem, would continue this theme.

In 1924, a year before his death, in the poem The Return Home, he describes a ravaged village with its poor wooden houses and a calendar portrait of Lenin hanging instead of an icon. Seeing Yesenin as an ideological and cultural danger, the authorities harassed the poet, bringing arbitrary court cases against him.

In 1925, nervous breakdowns, alcoholism and pressure from the authorities landed Yesenin in a mental hospital. A month later he was found hanging from a pipe in the Angleterre Hotel in Leningrad (as St. Petersburg was known in the Soviet Union). The previous day, Yesenin had composed his final poem, Goodbye, my Friend, Goodbye, in blood.

The official cause of death was suicide, but many alternative versions have been put forward in the last decade. The most common is that the troublesome poet was murdered by the Soviet authorities.