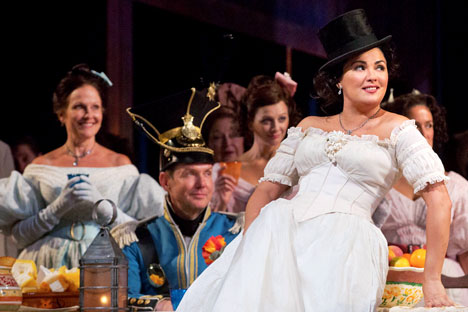 She evidently relishes all that comes with being a celebrity, but she has always resisted going into pop music, although she knows it’s “cool” and would make her even more glamorous.

Proving herself, once again, “not just a Met star, but the Met star” (New York Observer), Anna Netrebko headlined her second consecutive season-opening gala for the Metropolitan Opera yesterday, September 24. In her house role debut as Adina in Bartlett Sher’s new staging of L’elisir d’amore, the Russian soprano’s opening-night performance was transmitted live starting at 7 PM EDT to open-air screens at both Lincoln Center and Times Square, broadcasted on Metropolitan Opera Radio on SiriusXM, and streamed live on the Met’s website, so that audiences outside New York can also see Netrebko perform at the Met via Live inHD. The live broadcast of L’Elisir d’Amore is to be on Oct. 13, but there will be reruns for several weeks after that.