Roman Papsuev
The first characters were based on the author’s feelings and fantasies. The more the author got immersed in the subject, the more accurate his pictures became. 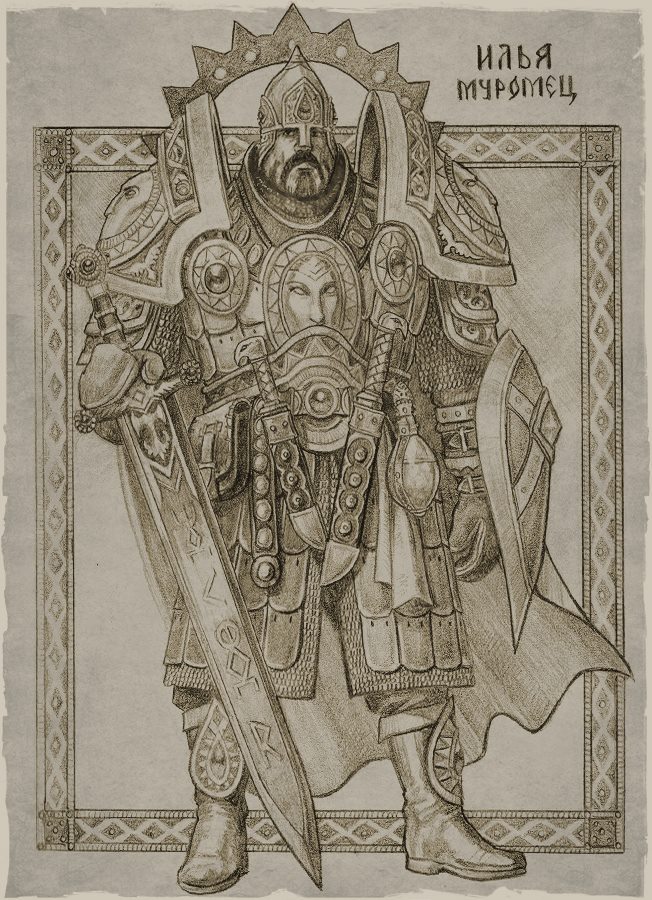 The first characters were based on the author’s feelings and fantasies. He began, of course, with Ilya Muromets — the main Russian epic hero and the strongest bogatyr or warrior: “On his belt hangs a bottle of dead water that heals wounds.”

Dobrynya Nikitich is the second bogatyr, after Muromets. He does battle with evil snakes and dragons. Dobrynya is educated, well-read (as evidenced by the scroll in his bag), and belongs to a princely family, so his weapons and armor are rather luxurious. 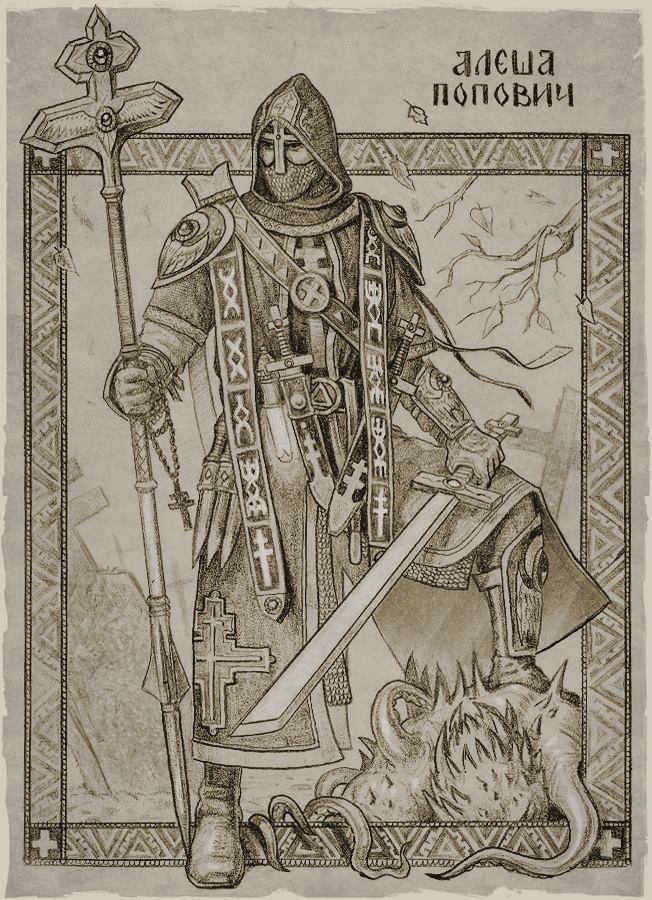 Alyosha Popovich is the third most important hero. The more the author got immersed in the subject, the more accurate his pictures became. He began to reread the tales and study the works of famous folklorists. 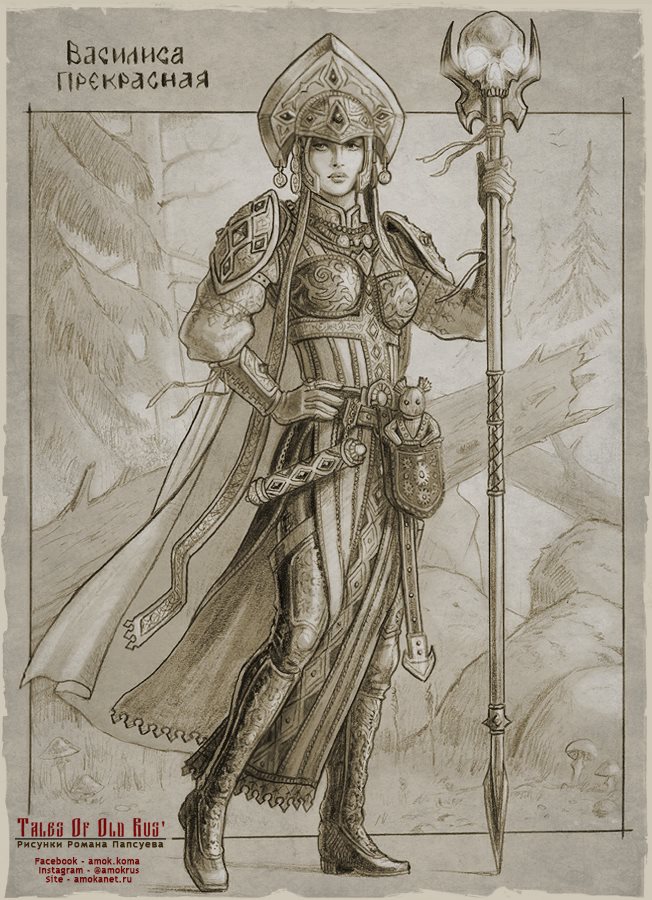 “What I like most is when people look at my pictures and then begin to read the tales and understand why, for instance, Vasilisa the Beautiful has a doll in her bag or why Vodyanoy rides a giant catfish. This grassroots revival of ancient folklore through my humble project gives me great pleasure.” 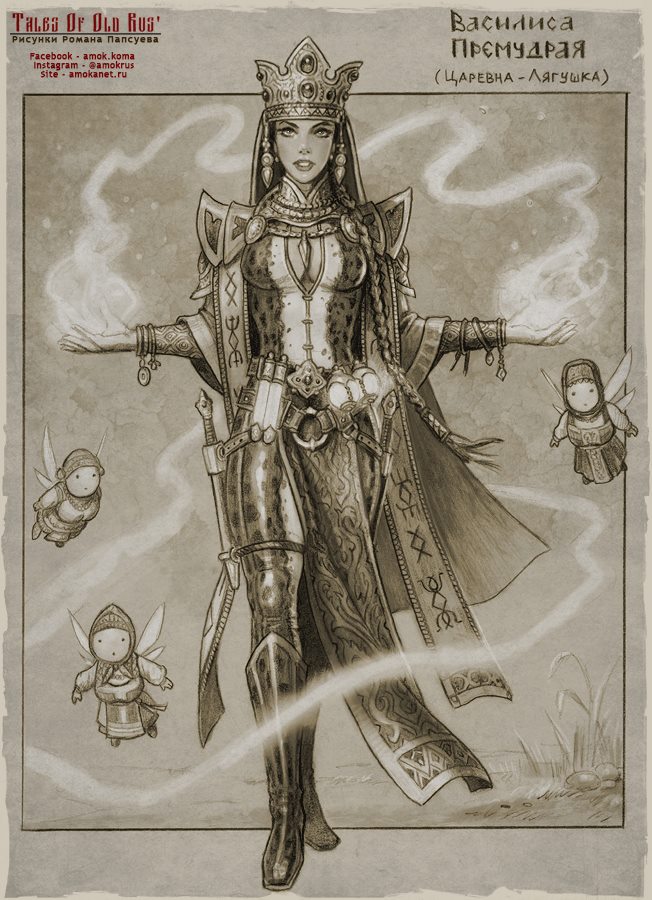 Here is another Vasilisa, Vasilisa the Wise, also known as the Frog Princess. "If you look closely, you will see an arrowhead pendant hanging on her breast, with which she was shot." 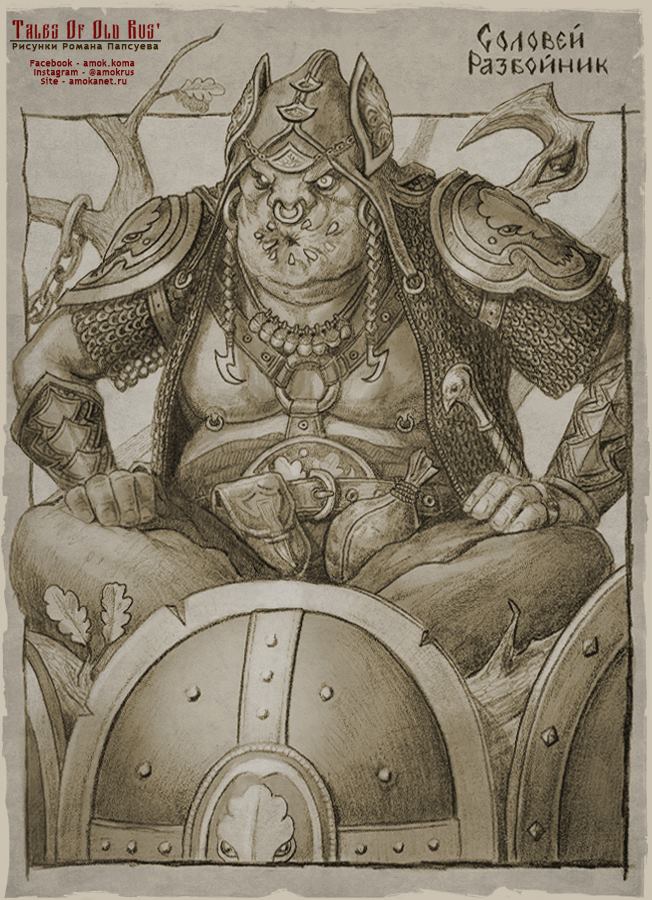 The Robber-Nightingale sits high in a nest atop nine oaks, sees far and wide, and whistles like a bird. "Sound is his main weapon. His whistles are like arrows, his screams are sonic blasts.” 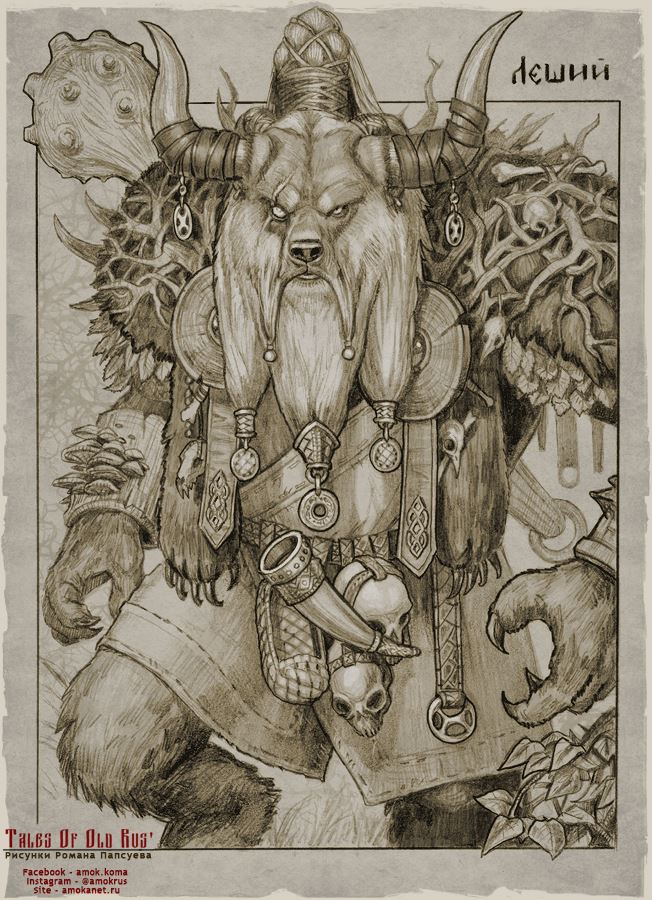 Leshy, the forest guardian, is more radically minded than Lesovik, another woodland sprite. "His ‘dead’ right eye is usually larger than his normal left. His beard and hair are . His hands and feet are covered with fur. On the you can see trophies — the skull of a lost traveler, a drinking horn, a bast shoe. He collects them." 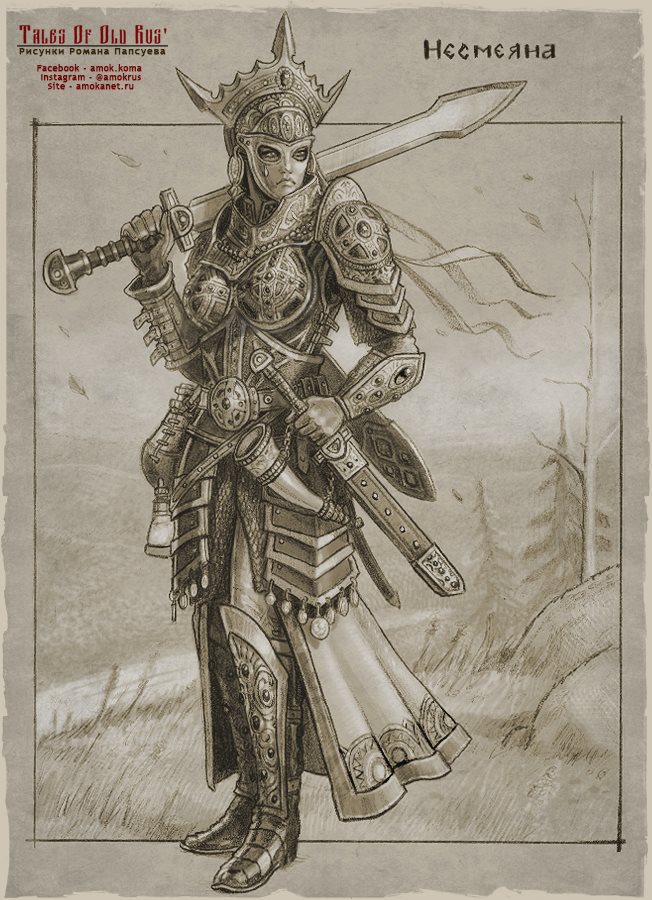 The never-smiling Tsarevna Nesmeyana (Nesmeyana means “never laughs”). “Attentive viewers will note the horn and flask on her belt. Why? Because she's always in a bad mood and inclined to drink. When she laughs (and she laughs very rarely), it means that she is losing control,” says the author. 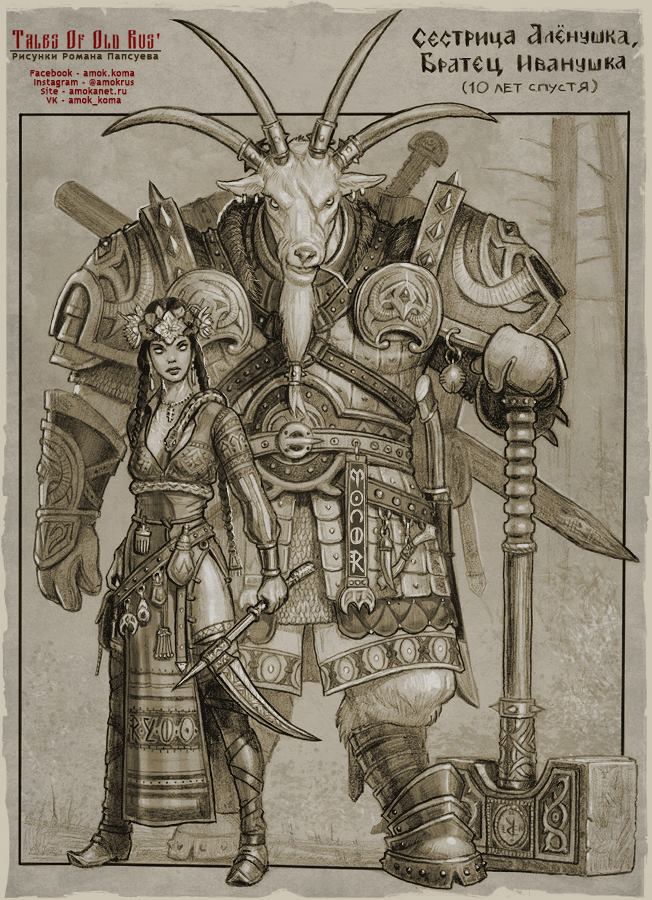 This is an unusual interpretation of the fairy tale about Alyonushka and brother Ivanushka. According to legend, Ivan turned into a goat, his sister drowned, and a snake (which you can see on the chest of the heroine) sucked out her heart. The illustration makes the story more optimistic — the brother and sister not only but become witch-hunters. 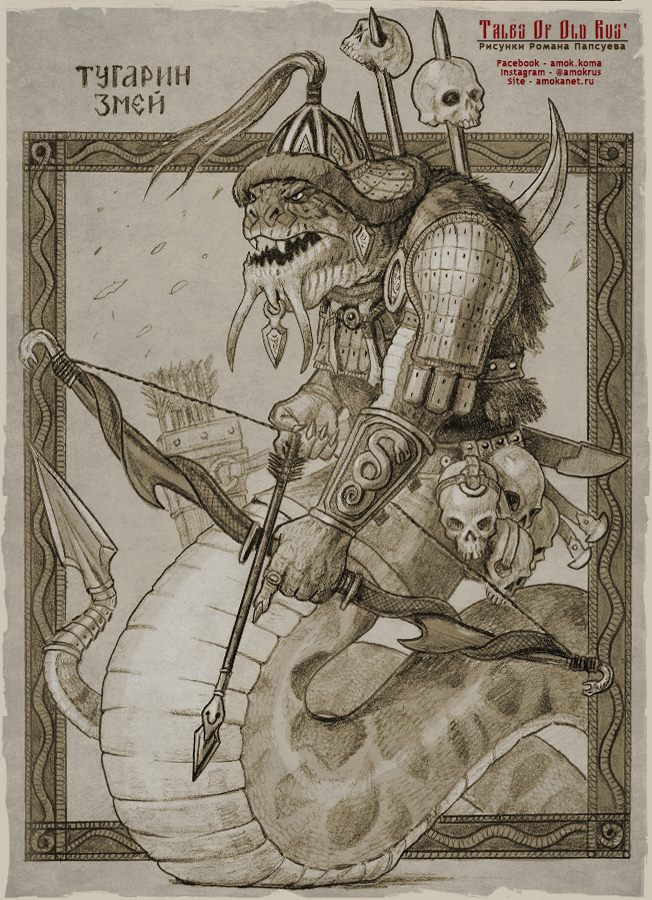 The author sometimes faces criticism in social networks. That’s inevitable. People say: “It’s not like that in the original tales. Ivanushka turns into a boy at the end. There’s nothing Russian here." 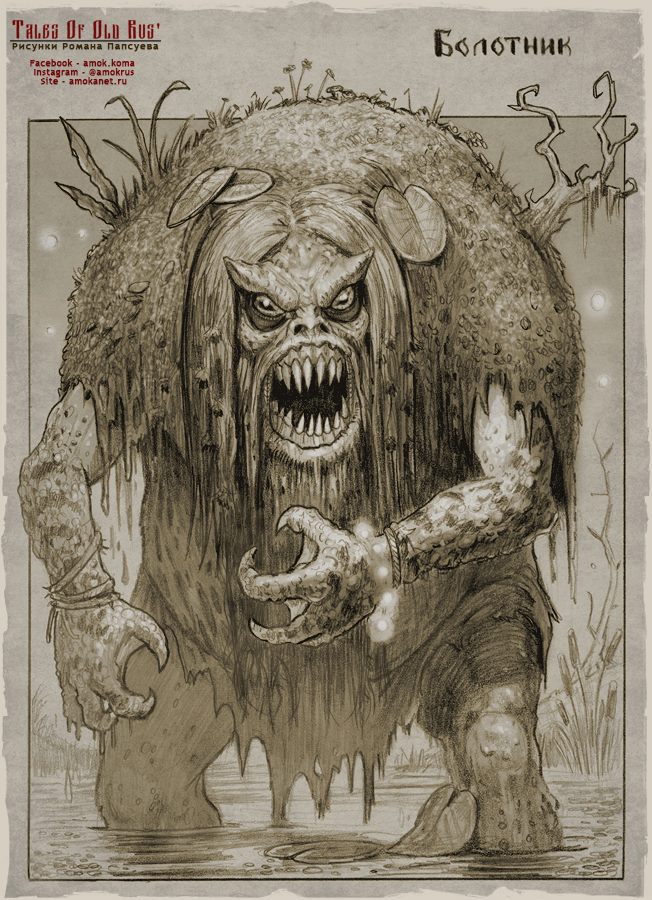 “The tales are stamped in the subconscious from childhood. Parents read adapted versions, of course, with happy ends,” responds Roman. 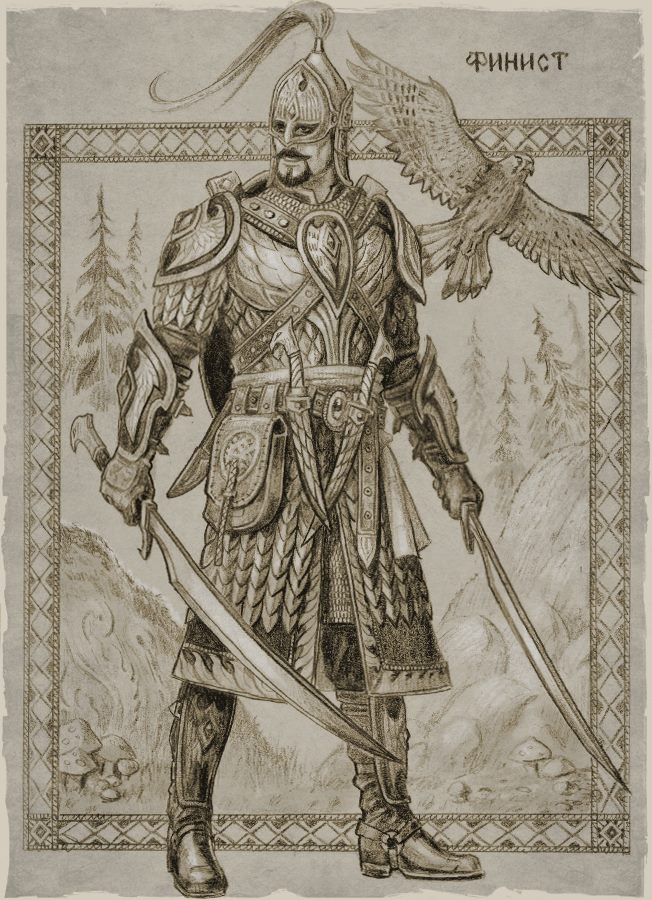 "People with sufficiently developed critical thinking should understand that nobody knows how it ‘really’ was. We don’t understand the modern world, yet feel like experts on ancient times and mythology. History is too muddled to be able to claim “this is Russian, this isn’t Russian, etc." It’s just 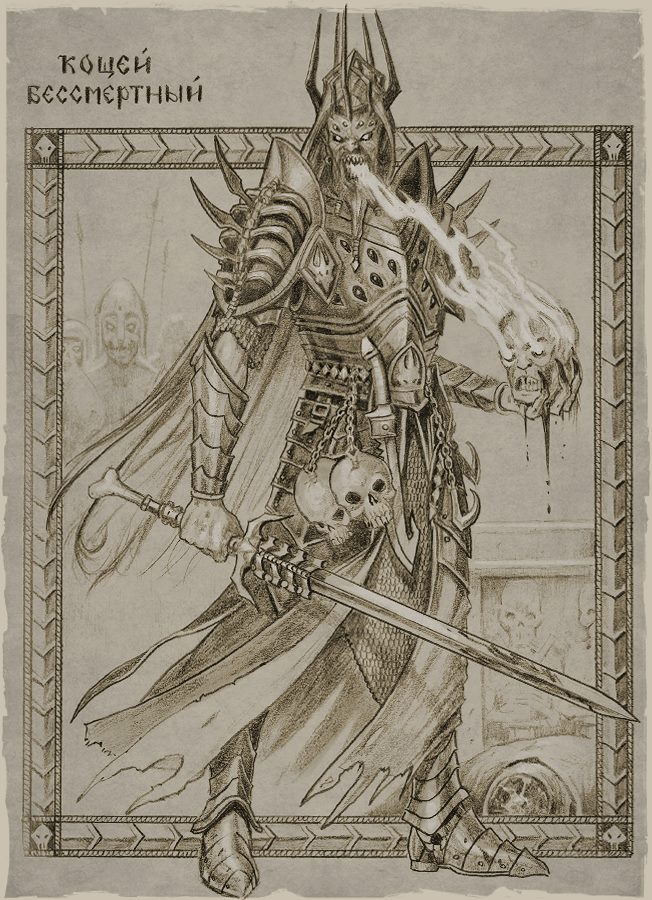 This project has no relation to real history or real life. These are just tales, trapped in a world of games. It’s a fun project. Don’t take it too seriously."