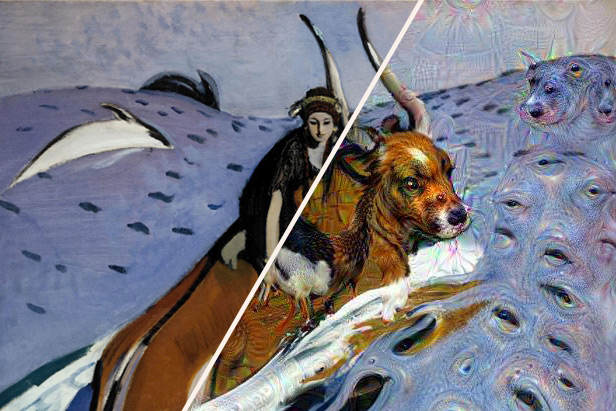 Yaroslav Cohen
We picked several of the best-known Russian paintings and showed them to Google’s artificial neural network. Here's what we got in return – a bizarre psychedelic recreation of these much-loved masterpieces.

Google has spent several years teaching computers how to understand our world based on pictures. Someday this will allow search engines to classify images just by "looking" at them.

#1 Girl with Peaches, by Valentin Serov. The innocent subject of this portrait now looks somewhat infernal. But this kind of result is nothing out of the ordinary when you show portraits to a neural network. Here you can see a lot of snails and dog faces.

Today these artificial networks are still taking their first steps in the quest to recognize the real world, and the results look like something from some kind of horrible psychedelic nightmare. For example, if the network, having learned to distinguish a dog, sees something dog-shaped, it will often read it as a dog, even if in fact it is an area of shadow or a piece of clothing. Google’s computer sees our life through the prism of countless eyes, animal faces and dreamy fractals.

We decided to test Google's artificial neural network by seeing how it would interpret several classic Russian paintings.

#2 Portrait of an Unknown Woman, by Ivan Kramskoi. The woman now resembles a creature with 100 eyes. This is the result of the neural network’s learning process, in which scientists upload thousands of animal faces and teach AI to recognize those parts in other images.

#3 Boyarina Morozova, by Vasily Surikov. How many puppy heads do you see here?

#4 The Merchant's Wife at Tea, by Boris Kustodiev. If you stand back five feet from the display, this actually looks pretty close to the original.

#5 Barge Haulers on the Volga, by Ilya Repin. Here it is almost impossible to recognize people – instead we see what looks like a horrendous creature emerging from the water.

#6 Knight at the Crossroads, by Viktor Vasnetsov. Share your thoughts on this one. For some reason it brings to mind the horror stories about creatures born after the Chernobyl disaster.

#7 The Rape of Europa, by Valentin Serov. Here we see what appears to be a huge dog with horns moving through some kind of sludge with a little girl on its back. However, if you look at it through squinted eyes, it's not that far away from the original.