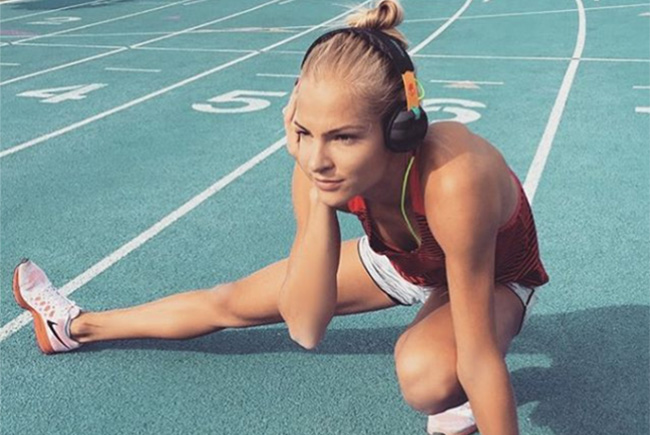 Long jumper Darya Klishina is the only track & field athlete to represent Russia in Rio 2016. A two-time European champion, she is the darling of the Russian media. Rio 2016 will be the first Olympic Games for Darya, and a lonely one in the absence of all her team-mates.

Current 100-meter breaststroke world champion Yulia Efimovawas eventually given the nod to compete in Rio. She won her appeal at the Court of Arbitration for Sport against the FINA decision to ban her from the Games because of past doping. A four-time world champion, two years ago Yulia left Russia and started training in the US, which helped her avoid the fate of other Russian swimmers. Yulia won 2 silver medals in the women’s 100 and 200 meters breaststroke. Rivals and spectators alike showed their disapproval at Yulia’s participation in the Olympics.

Yana Kudryavtseva is Russia’s leading light in rhythmic gymnastics. Just 18, Yana is already a 13-time world champion. The blonde girl is heading for her debut Olympics as a favorite: Having entered adult sports in 2013, she has become the youngest world champion ever. And Kudryavtseva has given no reason to doubt her superiority in the future as well.

"Actually, I never worry. Perhaps that is just how my nervous system is," Kudyavtseva said in an interview with Sport-Express. It is possible that it was her unique psychological stability that helped her win five gold medals at the 2015 world championship in Stuttgart, even though she had a fractured foot.

Tennis player Elena Vesnina is a Grand Slam doubles winner (Roland Garros 2013), two-time Fed Cup champion (2007, 2008) as a member of the Russian team, and the winner of 12 WTA tournaments. Together with Ekaterina Makarova, Elena has made it through to the semi-finals of the Olympic women’s doubles and will soon be battling it out for a medal.

In 2008 Maria Verchenova became Russia’s first ever player in the Eurotour Golf Championship, the most prestigious tournament in the world of women’s professional golf. Since golf is now an Olympic sport, Maria will represent Russia as her country’s sole player in the women’s competition.

Gymnast Aliya Mustafina. Six years ago she was untouchable, but then in 2011 suffered a serious injury. Since then, training has gone hand in hand with operations and recuperative therapy. Aliya is an Olympic champion and three-time winner of the World Championship. At her first Olympic Games in London she picked up four medals, becoming the most decorated gymnast (and athlete, save for swimmers) at the 2012 Summer Olympics. In Russia Aliya is a symbol of sporting courage and determination, and she has already won Olympic bronze in the women’s all-round gymnastics in Rio.

From the USSR to Rio 2016: the metamorphosis of Team Russia’s uniform>>>