Chekhov, Tolstoy and other Russian writers now in color 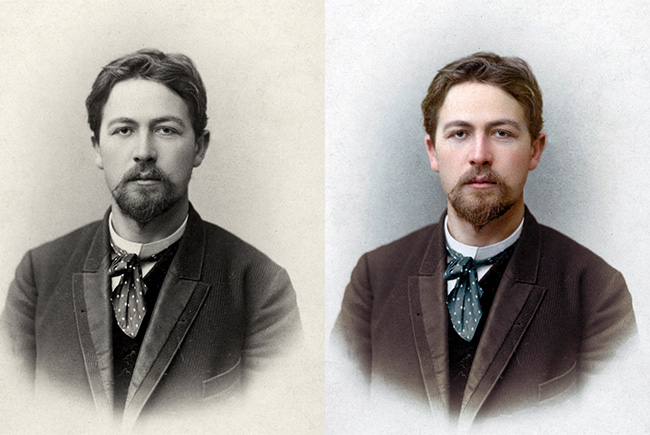 Klimbim
Russian artist Olga Shirnina (also known as 'klimbim') colors archive images of famous Russian writers and poets. We added audio recordings of the writers and poets whose voices could be found.

Anton Chekhov, beloved by audiences the world over for his plays, author of The Cherry Orchard and Three Sisters, and a genuine master of small prose.

“In the galaxy of great European playwrights who were Ibsen’s contemporaries, Chekhov shines as a star of the first magnitude, even beside Tolstoy and Turgenev,” wrote George Bernard Shaw.

Anna Akhmatova is Russia’s most renowned female poet. She was unable to rescue the victims of Stalin’s Terror, the purges, or the Siege of Leningrad during World War II, but her transparent verse preserved their memory and saved them from a second death in the form of oblivion. Dedicated to the memory of the deceased are the poems Requiem and Poem without a Hero.

Osip Mandelstam,  one of the greatest Russian poets of the Silver Age, lived and wrote without buckling to the pressure to conform. His brave poetry and notorious Stalin epigram cost him his life. He died like thousands of his oppressed countrymen – of exhaustion and heart failure in a Siberian camp.

Leo Tolstoy is one of the few Russian writers to enjoy phenomenal popularity with Western audiences. Nowadays his novels are often cinematized, giving people all over the world an insight into War and Peace, love and life, and the mysterious Russian soul.

Mikhail Bulgakov. Working as a doctor in a remote village brought Russian writer Mikhail Bulgakov plenty of ideas that morphed into prose, among them the famous A Young Doctor’s Notebook, screened on British TV in 2012. Decades later, posthumously, his magnum opus, the novel Master and Margarita, gained global recognition and has since been translated into 75 languages.

Sergei Yesenin. "My Russia, wooden Russia! I am your only singer and herald". With his love of rural space, Russian poet Sergei Yesenin did not accept his fellow countryman Mayakovsky's revolutionary and industrial poems, and instead dedicated his poetry mainly to love for women and the Motherland.

Maxim Gorky. A politically active writer, he became a symbol of socialist idealism, but his later relationship with the Soviet authorities were complicated. His works include novels, plays, and autobiographies. His novel The Mother became a staple of Soviet literature and is often considered the first work of socialist realism. / Pictured: Maxim Gorky with wife Ekaterina Peshkova.

Vladimir Mayakovsky. The brooding James Dean of Futurism, he was the revolution’s foremost poet and poured his heart and soul into the Bolshevik cause. His most famous works are the poem A Cloud in Trousers and other great verse about love, life, and Soviet reality.

Vladimir Vysotsky. Among all Soviet musicians, Vladimir Vysotsky is one of – if not the – most popular. He is also the one whose place in history and in the hearts of Russians has grown the most over the years. He is seared in the memory of his compatriots as a great poet, author of lyrical songs, and genius singer and actor remembered for his revolutionary performance of Shakespeare’s Hamlet.