What would have happened if Instagram had appeared in Russia many centuries ago? 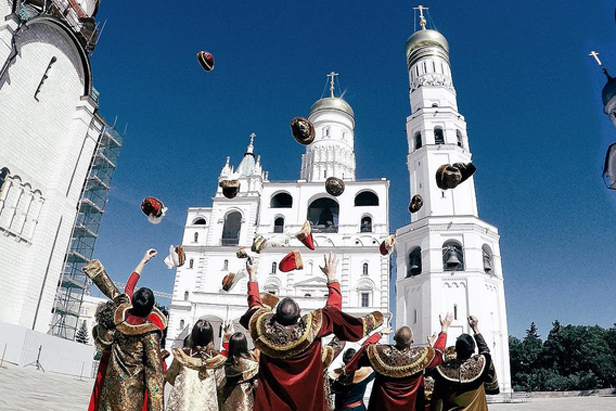 History does not tolerate the subjunctive mood. But since today’s Friday, we’ll indulge in a spot of fantasizing

History does not tolerate the subjunctive mood. But since today’s Friday, we’ll indulge in a spot of fantasizing. Let’s imagine what would have happened if Instagram had appeared in Russia many centuries ago.

But first let me take a selfie in the mirror!

The boyars take pictures of exhibits in the Patriarch's Palace inside the Kremlin. The Cross Chamber was used as a hall for special receptions. In the 18th century an oven was built in the Cross Chamber for making chrism, an ecclesiastical ointment. (The alternative name for the chamber, Mirovarennaya, comes from the Russian word for the ointment, miro.)

A boyar’s wife has discovered how to make money from Instagram: just upload anything that’s cute or fluffy.

A wealthy merchant shows his comrades a swanky house he put up in Moscow’s Zamoskvorechye district. His response to the question “What style is that?” is a disdainful: “Gothic, you peasants!” (The high-rise building on Kotelnicheskaya Embankment was in fact built during the period 1938-1952; it is one of Stalin’s “seven sisters.”)

The boyars are following the most famous Russian couple on Instagram: Murad and Natalia Osmann, who we described earlier. They are trying to repeat their success.

A boyar’s wife tried to take a snap of herself with a bell suspended over the palm of her hand (like people never tire of doing with the sun), but all of a sudden the bell fell to the ground. So it had to be done like this, sitting down. (In fact, the bell was cast in 1730 under Empress Anna Ioannovna Romanova and was damaged during a major fire in 1737.)

Some boyars are getting ready to play rucheek in the Armory Chamber. Rucheek is an ancient Russian game, similar to “thread the needle.” Participants are divided into pairs holding hands. They stand in two columns opposite each other and raise their hands above their heads to form a tunnel. The “odd one out” walks down the “corridor” and selects a pair, which he breaks, forming a new one. This pair goes to the back of the “rucheek” (literally “stream”), and the pairless player becomes the new odd one out.

In Cathedral Square the boyars warmly welcome the arrival of the oprichnina (the administrative elite under Ivan the Terrible) as well as a software update: now we can do some vertical and horizontal photos and videos.

Gazing upon such splendor, we can’t decide which Moscow we like more: medieval or modern? How about you?