Lifestyle
Igor Davydov
Daria Donina
In the evening of March 30, 2016, 23-year-old Russian woman Katya Kotova entered the Moscow Cathedral Mosque for the first time. Her mission was to adopt Islam.

It was only the second time that Katya had set foot inside a mosque. The first was in early childhood, when her grandmother took the then 3-year-old Katya to the mosque in their native Bashkortostan. “I clearly remember the scene: women were praying upstairs, and I was stood nearby holding onto the railing, looking down at the men praying on the ground floor.”

More than half the population of Bashkortostan is “ethnic” Muslim, meaning that they profess Islam for historical reasons without always observing its religious precepts. In light of modern Russia’s atheist Soviet past, this is a common situation. Katya’s parents are secular. Her father is Russian and “ethnic” Orthodox, while her mother is Tatar and “ethnic” Muslim; neither is observant.

The previous generation was more religiously minded. Katya’s Muslim grandmother taught her an Islamic prayer, and her Orthodox great-grandmother a Christian one. Katya could recite the Islamic prayer off by heart without understanding the meaning: “But for some reason, whenever I was scared as a child, I remembered that prayer.” Throughout her childhood Katya read both prayers at bedtime, unaware that it wasn’t common practice. 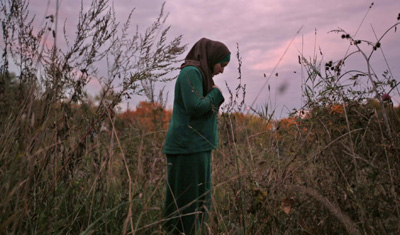 At around the age of 13, she realized that it wasn’t the done thing. Besides, Katya had been baptized as Orthodox and was often told at school “you're Russian,” so she decided to abandon the Muslim prayer and wear a crucifix. Katya's elder brother also developed a keen interest in Orthodoxy and adheres to the faith to this day. Katya had many questions that no one could answer. For example, she could not accept the idea that Jesus is God, not a prophet, and did not agree with some Orthodox customs, such as the worship of holy relics.

With these thoughts swirling in her head, the now 18-year-old Katya arrived in Moscow. She came to study at the All-Russian State University of Justice, with the aim of becoming a lawyer or an investigator. Katya shared a room in a hostel with a Muslim girl, and they often argued about religion. To be able to stand her ground, Katya started studying Orthodoxy and Islam. Over time, her interest in Islam grew into a strong desire to adopt the faith.

A few months before graduation, having completed an internship at the Investigative Committee and with the intention of starting work there, Katya took everyone by surprise by converting to Islam. Working at the Investigative Committee in a hijab was out of the question, so Katya decided to take a small break to consider her future options. It was during this troubling period of her life that we made her acquaintance. 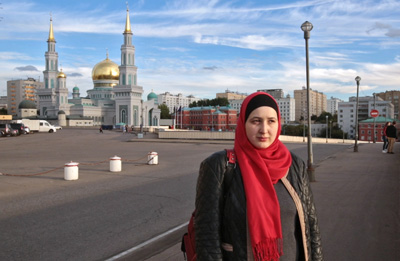 Now she works as a waitress at a Dagestani halal cafe [the region of Dagestan has Russia’s third largest Muslim population]. Asked if she would like to return home, she responds in the negative.

“In Moscow I feel safe. I'm not afraid of being shoved or having my scarf pulled off. Sure, I get a bit of verbal abuse now and then, but there’s no physical aggression. I have no plans to leave Moscow, but if I did decide to leave I’d go to Tatarstan, where there are more Muslims, more veiled women, and more halal establishments.”

She is inspired by stories of strong-willed, independent women. In conversation, she gushingly tells the story of Irena Sendler, who saved 2,500 children from the Warsaw Ghetto during the Second World War, of the Soviet Union’s Valentina Tereshkova, the first woman in space, and of the young Pakistani human rights activist Malala Yousafzai. In the near future she hopes to get back into human rights activism, helping women and children and working with families. “The Russian mentality says that you shouldn’t wash dirty linen in public, so to speak. It means that family problems, including domestic violence, are not something people speak out about. It's a problem for women, who usually have to deal with it alone. I believe that the resolution of family conflicts should involve both sides,” she says.

Katya says that in Islam women are free, contrary to the stereotype of Muslim women being closed off and alienated from the world, kept at home like a bird in a cage, first by their parents, then by their husbands. A wife can work if she wants to, and if it is halal-related, according to Islam, her husband is obliged to support her. “I think a woman’s purpose is to bring peace and tranquillity to her family.”

Katya’s main task at the moment is indeed to pacify her family. Her parents are not jumping for joy over her decision to convert to Islam and wear the hijab, and fear that Katya may experience problems as a result. Against the backdrop of today's information agenda, their concerns are hardly surprising.

“My parents are aware of my decision to adopt Islam, to dress conservatively, and to wear a headscarf like Tatar women in the region, tied at the back of the head. But they don’t know I cover my neck when wearing the hijab.” They are due to meet before the New Year, when Katya arrives on vacation.

This video is the first in a series of materials about Muslim women in Russia. Keep an eye out for updates.