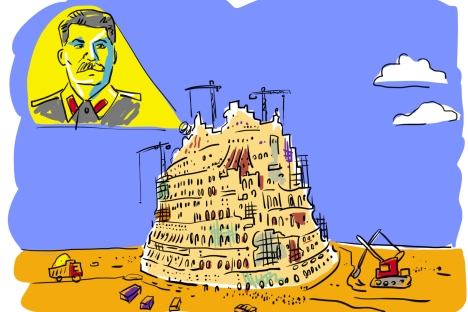 The 60th anniversary of the death of Joseph Stalin (March 5, 1953) has galvanized the debate about his role in both Russian and world history. The desire to draw parallels between the events of the 1920s–1950s and the present day makes the debate all the more intense. One cannot ignore the role of Stalin’s legacy in such a comparative analysis.

The national question remains one of the most difficult problems of modern development for all post-Soviet nations. Since the collapse of the Soviet Union, this part of the world has been swept by a wave of instability and violence. The once united nation has suffered eight inter-ethnic and civil, armed conflicts – some of which are yet to be resolved.

At the same time, the roots of most current problems can be traced directly to the national policy conducted first by Lenin and then by Stalin. Theoretical constructs developed by the Bolsheviks in the years preceding the revolution and immediately after it largely defined the nature of the Soviet state’s domestic policy.

As Valery Tishkov, Stalinism scholar and member of the Russian Academy of Sciences, correctly pointed out, “Russian Social Democrats initially considered the so-called national question to be of secondary importance, and reduced it to a slogan of nations’ right to self-determination… It was only in 1912 that Lenin started paying considerable attention to this problem.”

Ethnic and national movements were in full swing in Russia by then, and a social debate on the national question was well underway. The Russian Social Democratic Workers’ Party suddenly faced the risk of splitting along ethnic lines, the way it was happening to Social Democratic organizations in Western Europe.

Russian Bolsheviks borrowed the definition of a nation from the works of Austrian Marxists at the beginning of the 20th century. A definition coined by the chief theoretician of the Bolshevik party for the national question, Joseph Stalin, subsequently became part of all Soviet humanities textbooks. Moreover, only ethno-cultural groups featuring all of the characteristics defined by Stalin at once were eligible to be considered “nations.”

According to Stalin’s doctrine, the Soviet Union was envisioned as a state whose key subjects were socialist nations rather than citizens. The rights of nations rather than individuals were treated as a priority. Ethnic differences between Soviet citizens were consolidated on a territorial basis.

The number of ethnic groups having the right to “a land of their own” varied with the general line of the Communist Party, while administrative boundaries between various subjects of the state were often drawn in areas where no ethnic identity had yet emerged.

In practical terms, this meant that various ethnicities developed the idea of “collective” (or “national,” in its highest manifestation) ownership of territory designated either as a national republic, an autonomy within a national republic, or even an ethnically constructed district.

The denial of individual rights in favor of collective rights was thus creating a basis for the emergence of ethno-national movements for self-determination of future independent states. It was back in 1924 that the prominent Lithuanian Bolshevik Juozas Vareikis called “the world’s first state of workers and peasants” – divided into Union and autonomous republics – “a communal apartment.”

National cadres took priority when forming local governments in the 1920s and early 1930s. Subsequently, ethnic interests were subordinated to mobilization-driven economic development, creating the basis for a conflict of interests.

The Stalinist practice of deporting entire peoples made the conflict of interest between ethnicity and state especially acute. Not only did this lead to entire ethnic groups developing a negative attitude toward the state (such as the Chechens), but also to serious inter-ethnic contradictions (such as the Ossetian-Ingush conflict over Prigorodny District).

After the iron fist of the totalitarian state weakened in the late 1950s with the beginning of the “thaw,” the ethno-centrism encouraged by the government contributed to the formation of widely shared notions of ethnic exclusivity of various peoples within “their own territories.”

No viable social alternatives had emerged during the years of the Great Purge. As a result, the inhabitants of the Soviet “communal apartment” were left wondering why, when the time came for roommates to move out in 1991, some of them received their “private apartments” and some did not.

As the Soviet Union’s integrationist potential weakened and its integrating ideology – Soviet Communism – plunged into crisis, the process of the ethno-national self-determination of its constituent republics began in earnest. As the American ethnologist of Russian origin, Yuri Slezkine, correctly pointed out, “[the Soviet Union] was established by nationalists and it was destroyed by nationalists.”

Therefore, to paraphrase Karl Marx’s famous formula, the Soviet elite and Stalin, as one of its most prominent architects and leaders, acted as “grave diggers” for the united nation.

Sergey Markedonov is a visiting fellow at the Center for Strategic and International Studies in Washington, D.C.