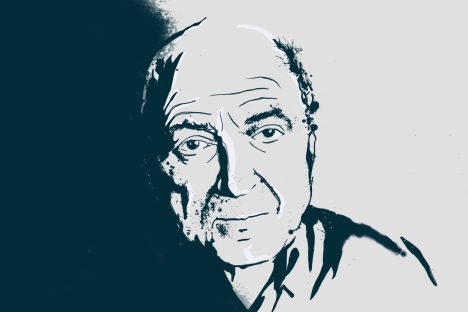 The death of exiled Russian oligarch Boris Berezovsky, probably due to suicide by hanging according to police reports, appears to have been brought about in large part by increasing depression resulted from his recent political and financial failures.

Drawing by Natalia Milhaylenko. Click to enlarge the image.

The death of exiled Russian businessman Boris Berezovsky, probably due to suicide by hanging according to police reports, appears to have been brought about in large part by increasing depression that set in after he lost a court battle against his former business partner Roman Abramovich.

Berezovsky belonged to the breed of people that that can’t bear losing. To them, life is about winning. But the last several years brought the London émigré a string of setbacks. He was well and truly taken apart by Vladimir Putin. All the people in Russia whom Berezovsky bankrolled either defected or stepped aside, or passed away.

The liberal milieu could not forgive him his media outlet’s attacks on the team of young reformers, or his questionable links with the Chechen rebels. Berezovsky’s plans in the former Soviet republics also failed: The “Orange Revolution” he sponsored was a fiasco, while the main beneficiary of his financial injections, former Ukrainian Prime Minister Yulia Tymoshenko, is stuck in prison.

The Russian revolutionary Leon Trotsky, with whom the former head of LogoVAZ [Berezovsky] has often been compared, also hated losing. But Trotsky fought against Soviet leader Joseph Stalin to the end, until his last breath.

An example closer to home is Mikhail Khodorkovsky, the jailed oil tycoon. He is in a much more complicated situation, and he is obviously no match for Berezovsky in terms of temperament. But he doesn’t give the impression of a psychologically crushed person.

It would be simplistic to claim that Berezovsky had no ideals at all, and that he had only interests. I think deep in his heart he had his own dream of Russia.

In the late 1990s, a wise political analyst told me that people like Berezovsky needed a weak Russia, a Russia without strong government, whether its own or foreign. They could safely do business only in an amorphous, semi-federative disintegrating country. The best option for such people would be to turn Russia into a kind of Eurasian Cyprus, a hopelessly divided country with low taxes and an ineffective government.

Until recently – right up until the Cyprus financial crisis, in fact – Berezovsky could at least hope that, however morally bereft his ideal of a “weak” Russia may be, that ideal was shared by thousands of Russian entrepreneurs who sought refuge for their money on the Mediterranean island.

He could hope that Russian businesspeople continue to vote with their money and savings for that small government system, of which that Orthodox Greek offshore zone was such a fine example.

It is perhaps far-fetched to attribute Berezovsky’s sudden death and his mysterious repentance to the European Union’s determination to sort out the situation with Russian investments in Cyprus. And yet, for a person like Berezovsky, these events could have been history’s final diagnosis on the “weak Russia” ideal, a Russia without strong central power.

Berezovsky was disliked and feared, but he was an ideal for thousands of adventurously-minded people in Russia (and I mean this in the positive sense). Now, like Berezovsky, these people have realized that they made a fateful mistake in the 1990s by succumbing to the charm of an “enfeebled” Russia.

Russian business today needs new, bold heroes, adventurers who are prepared to build a new “strong and sovereign” Russia in which there is still room for economic enterprise and political competition. This class, which despite all the risks is ready to bring its money back to Russia, will become the real infrastructure for a future nationally-oriented capitalism in Russia.

Boris Mezhuyev is a Moscow-based political analyst and commentator.