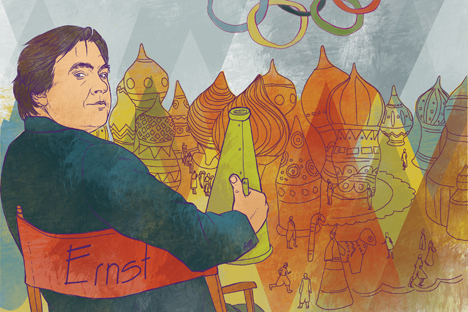 Who is the mastermind behind the Sochi Opening ceremony?

Drawing by Natalia Mikhailenko . Click to enlarge the image.

If you tuned into NBC on February 7 to watch the Olympic opening ceremonies, you might have missed some important details about the spectacle. The early headlines about Sochi had focused entirely on the expensive cost of the games, on Vladimir Putin’s role in getting the games to Sochi, on the Russian president’s leadership today, on the extreme anti-gay laws recently passed in Russia, and on the toilets many journalists discovered when they arrived. The main narrative of the Sochi games, in other words, had already been established.

When one of the five snowflakes failed to transform into an Olympic ring, the opening ceremonies seemingly confirmed all that had previously been figured out about Sochi. My Facebook feed exploded with numerous reports about the snowflake that was “too afraid to come out,” as a Twitter post put it. A satirical article published in the Daily Currant suggested the person responsible for the mishap had been found dead the next day and immediately went viral as a true story—it seemed so believable given what had already been reported about Sochi and given what is so widely believed about Putin’s Russia.

The little snowflake that could overshadowed a spectacular opening ceremony that captured important changes within Russia since communism’s collapse. The American coverage of the event certainly did not cover this story. NBC added David Remnick, the editor of the New Yorker and the Pulitzer-Prize winning author of Lenin’s Tomb, to their opening-night team. Remnick spent four years in Moscow as a Washington Postreporter, covering the USSR’s collapse. He has continued to write about Russia since he joined the New Yorker in 1992, but almost exclusively about high politics: his pieces before the games began were about Putin and Pussy Riot.

Remnick’s commentary for NBC very much followed in this vein. The opening ceremony became a discussion about what type of leader Putin is, how the event was an attempt to prove Russia is a modern country, and how the ceremony “bobsledded through history” in order to gloss over troubling pasts. The color commentary, just like the opening journalistic salvos fired at Sochi, was really all about Putin.

Yet the ceremony itself was not written, produced, or directed by the Russian president. While everyone who watched the London opening ceremony knew that Danny Boyle was behind it, just as NBC highlighted Zhang Yimou’s widely-praised direction in Beijing, no one watching NBC’s coverage learned that Sochi also had a director and that he too was involved with the film industry. American audiences did not learn about Konstantin Ernst’s vision.

Ernst is the head of First Channel, one of the state-owned television stations in Russia and the most-watched network in that country. He is, as Joshua Yaffa aptly described him in a recent New Yorker piece, “the premier visual stylist of the Putin era.” In addition to heading First Channel, Ernst is responsible for helping to turn around the Russian film industry in the 2000s.

He has produced several of the highest-grossing films in Russian history, including Night Watch, the 2004 sci-fi/fantasy movie that brought Timur Bekmambetov to prominence: Bekmambetov would go on to helm Wanted andAbraham Lincoln, Vampire Hunter. Ernst has also brought out innovative and award-winning television serials, including an adaptation of Anatolii Rybakov’s glasnost-era bestseller about Stalinism, Children of the Arbat. The TV version starred Chulpan Khamatova, who helped to carry the Olympic flag in Ernst’s opening.

Ernst’s work on big and small screens developed in the wake of the 1998 ruble collapse, the second time the Russian economy bottomed out in the 1990s. Ernst took over the channel in September 1999—the very same month Vladimir Putin became Prime Minister—and announced that both Russian cinema and Russian television needed to be “reborn.” Ernst and other likeminded individuals, including the director Nikita Mikhalkov (who also carried the Olympic flag) turned to Hollywood for inspiration.

They saw American audience-friendly blockbusters, which had saturated Russian screens after 1991, as a key for reviving the decrepit domestic film industry, but with a twist: Russian directors and film professionals needed to marry Hollywood-style scripts, star-driven productions, and special effects to “Russian” stories. As Ernst would later write, “we are eternally grateful to Hollywood because [their films] forced our lazy, fat Russian moviemakers to make films, to edit them, to make special effects, to talk in the language teenagers understand.” “We are grateful,” he concluded, “but now we will make our cinema ourselves.”

Ernst’s productions in the 2000s attempted to do just that. His work, as I wrote in my book on the Russian cinematic revival Blockbuster History in the New Russia, “retrofitted Soviet classics for post-Soviet audiences, explored the historical collapse of empires as tragic events, featured past and present-day detectives that could solve crimes, and explored Soviet history from Stalin to Brezhnev as ‘our national past’.”

Ernst, as critics have charged, turned the past into a “popcorn spectacle” or even engaged in the “hamburgerization” of Russian culture in the 2000s. His defenders have countered that he has managed to turn out satisfying fare while also contributing to a new patriotic culture in Russia.

His critics point to his close relationship with Putin as an indicator of the sinister side in his work, while others note that Ernst has carved out some autonomy for himself and created something special in a political system that has no real alternatives to Putin. Regardless of what your take on Ernst’s productions may be, what is undeniable is that he has helped to make Russian cinema successful again: starting with Night Watch, Russian blockbusters have frequently bested their American counterparts at the box office.

Ernst’s attributes were on display in the Sochi ceremony. He promised a spectacle that showcased Russian innovation and he delivered. He hired talented people, including the set designer George Tsypin, a Soviet émigré who now lives in Brooklyn and whose opera sets have garnered him worldwide acclaim (he also did the set for the Broadway musical Spider-Man: Turn Off the Dark). The snowflake failure was the only glitch in a show that featured entire sets delivered across massive pulleys (the heaviest one, representing Kamchatka, weighed 4.8 tons) and high-tech cameras that projected images across the stadium floor.

Most importantly, though, Ernst’s “Dreams of Russia” attempted to narrate Russian history over one thousand years through the eyes of Liubov (“Love”), a young girl who floats through this subjective reimagining. Ernst’s blockbuster-like history performance focused not on politics, though Peter the Great had a role, but on Russian culture. It found room for people and artistic movements that had not been acceptable in the Soviet era. The alphabet book Liubov reads at the beginning features luminaries such as Pushkin, Tolstoy, and Dostoevsky, yet it also contained Nabokov, whose aristocratic family fled Russia in 1919, and Chagall, who fled the USSR in 1923.

The show featured architecture, ballet, art, music, and writing that has defined Russian nationhood across time. The lengthy ballet “Natasha’s First Ball,” beautifully choreographed by the Belarussian Radu Poklitaru, captured the spirit of Tolstoy’sWar and Peace and the imperial-era culture that flourished in the 19th century. For the 20th century, with the help of Tsypin and American choreographer Daniel Ezralow, Ernst initially focused on the avant-garde, constructivist art of the first decade after 1917. The subsequent section on mass culture during the Stalin era featured the Western-loving stiliagi, or hipsters, who danced across Gorky Street.

One of the most popular films of 2008, made in the style of a Hollywood musical, told their story. Its director, Valery Todorovsky, recently premiered his television adaptation of The Thaw, the 1954 Ilya Ehrenburg novel that lent its name to the cultural relaxation after Stalin’s death in 1953. The series, which garnered enormous press coverage in Russia that often compared it to Mad Men, appeared on—you guessed it—Ernst’s First Channel.

Ernst’s “Dreams of Russia” therefore captured these dynamic cultural trends that have transpired over the last 15 years. A patriotism centered on Russia’s cultural heritage, a reexamination of Russia’s recent pasts that allows space for some problematic eras, and an audience-friendly showcase full of technological innovations: all were on display at Sochi.

Stephen M. Norris is Professor of History at Miami University of Ohio. He is author of Blockbuster History in Russia: Movies, Memories, and Patriotism (IUP, 2012), A War of Images: Russian Popular Prints, Wartime Culture, and National Identityand editor (with Willard Sunderland) of Russia's People of Empire: Life Stories from Eurasia, 1500 to the Present (IUP, 2012).